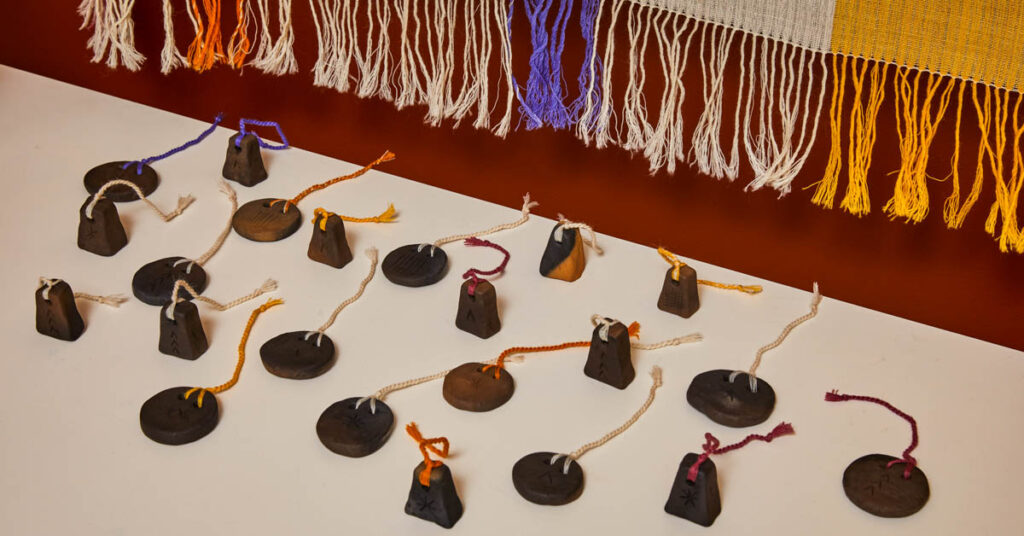 Ana Petidis draws on her Greek heritage to revive the spiritual value of weaving.

Movement between countries and lands is a part of my family history.

My ancestors shifted across the northern reaches of the Black Sea settling in North Western Greece. They fled the lands on which their families had lived for generations due to the compulsory population exchanges across Minor Asia at the start of the last century. After the upheaval of the Second World War, my parents emigrated to Australia in the early 1960s. They travelled independently of each other and came to pursue the prosperity and life they desired (and achieved). They met in the inner suburbs of Melbourne and developed a family, cultivated a community and engaged in a full life, including starting several small business ventures with varied success.

One of those businesses was a cut and sew production room in our garage. I grew up with my parents’ sewing machines on which they toiled to gain the prosperity they sought for their family. In both the garage of our family home and, at one stage in their own factory, I would sit and play with textile scraps, threads and buttons to pass the time. It was the 80’s and I was drawn to the vibrant bright colours of the polyester fabrics, and the movement of the cut scraps.

I went on to work in a social justice career supporting women experiencing homelessness. This work allowed me to develop a commitment and stronger understanding of the importance of connection to place and a sense of belonging. I was eventually drawn back to textiles as a change of career beckoned. I studied textile design at RMIT and nurtured the seed that had been planted on the sewing machine benches in our garage in Melbourne’s northern suburbs.

In December 2018 my partner and I packed up our home and my weave studio and moved to Ballarat. Whilst this move didn’t involve the dire or epic political and social upheaval of my ancestors, it did instinctively position me to consider the context of land and time in creating a sense of place for myself. What stood out to me in the move was the contrast in the physical landscape. Where I had grounded myself up until that time was surrounded by the softness and fecundity created by the tributaries of the Yarra River.  In my next landscape, an abundance of quartz rocks and clay invited me to connect differently to time and place, it initially felt intense, and it felt like everything reverberated through me. The dirt and what lies beneath feel are steeped in richness on this land.

This story of re-location formed a foundation of deep reflection for me that I could start working through creatively in my weave studio which was now set up in the sunroom of our new home, overlooking densely treed hills and a big sky.

Soon after moving house in 2019, I started working as a commercial textile designer at a weaving mill in Geelong. I was also teaching hand weaving, colour theory and textile design history at RMIT in the vocational education department and was an ongoing member of a group called Tenfold Textile Collective.

Tenfold was preparing for our next exhibition, to be held sometime in 2020 (we had no knowledge of the looming pandemic), and I was researching stories connected to the idea of moving country and time for my piece.

My research path somehow turned towards another weaver: the Goddess Athena, Pallas Athene and Minerva as she is known to the Romans, a warrior goddess, patron of the crafts, a healer, keeper of wisdom and a weaver. There was a custom in Ancient Greece of weaving a piece of cloth called a peplos to present to the Goddess during a procession held in her honour. A peplos is a large rectangle of cloth that was worn as a garment. Furthermore, the process of creating this particular cloth was devotional, consisting of a series of tasks completed as rituals, from spinning the yarn to dyeing and weaving the cloth performed by selected women. I took this idea of ritual and focussed on the offering I wanted to make to honour the passage of movement my ancestors had made whilst connecting to my Greek heritage. I went about a similar process to create a cloth steeped with elements of ritual, symbolism and connection.

I had access to Australian wool yarns from the commercial weaving mill I worked in. I often rescued damaged cones of these precious yarns out of the large skip bins. I used natural dyes similar to what would have been available in the region my ancestors were from, including saffron, madder, grape skin and lac. I became aware through my research of Athena that alongside the creation and presentation of cloth that other artefacts and tools of weaving had additional importance. 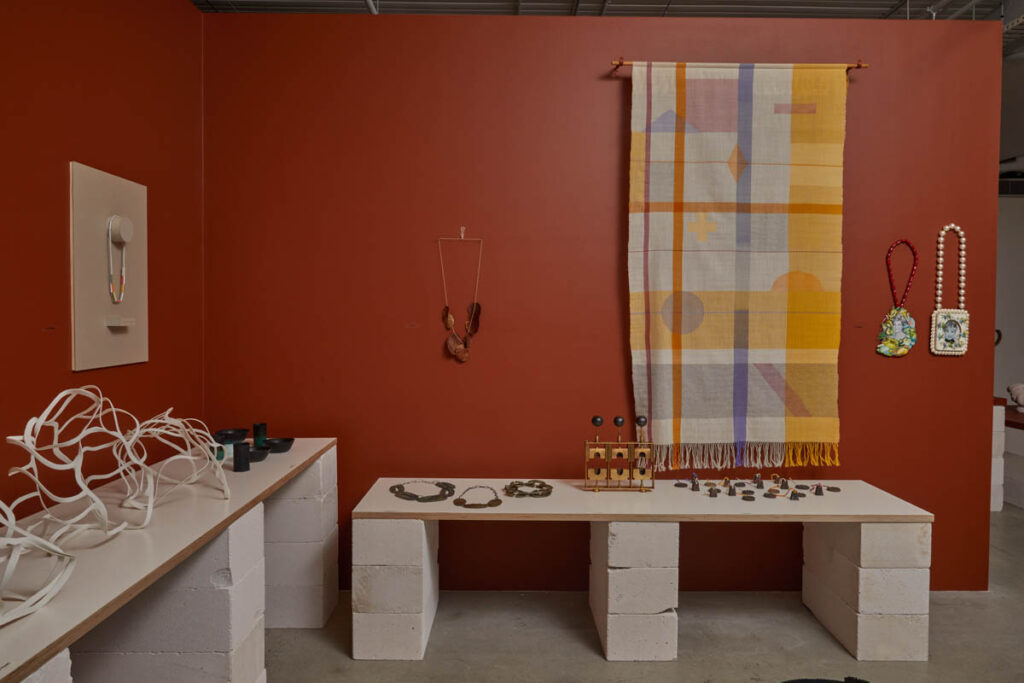 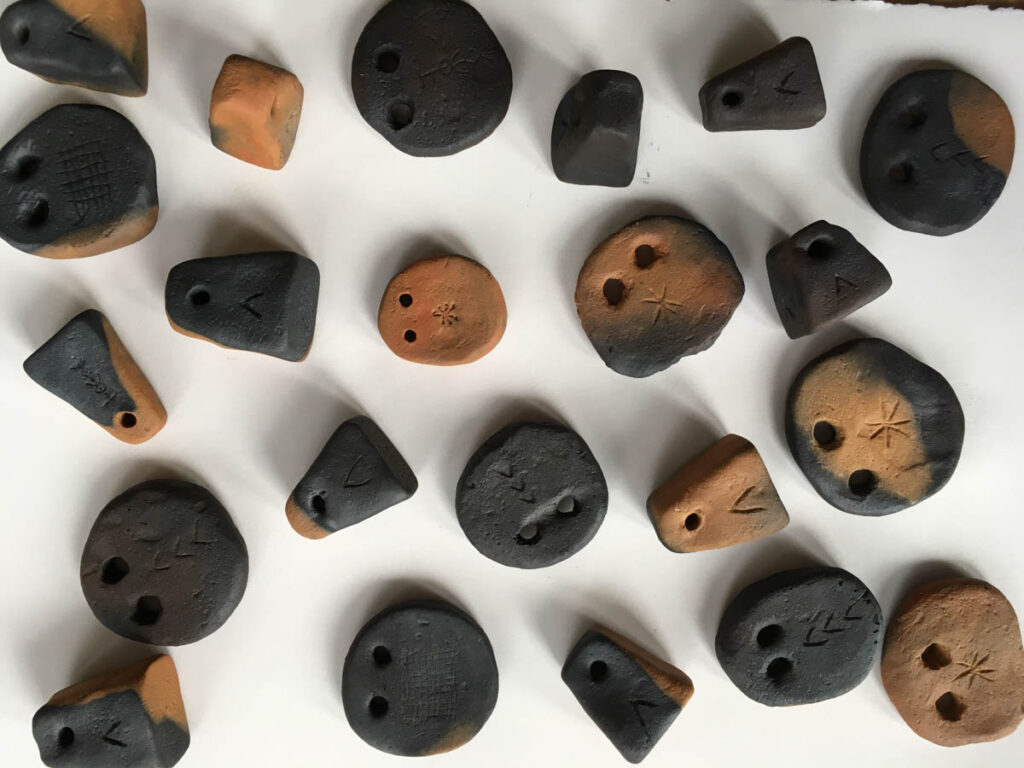 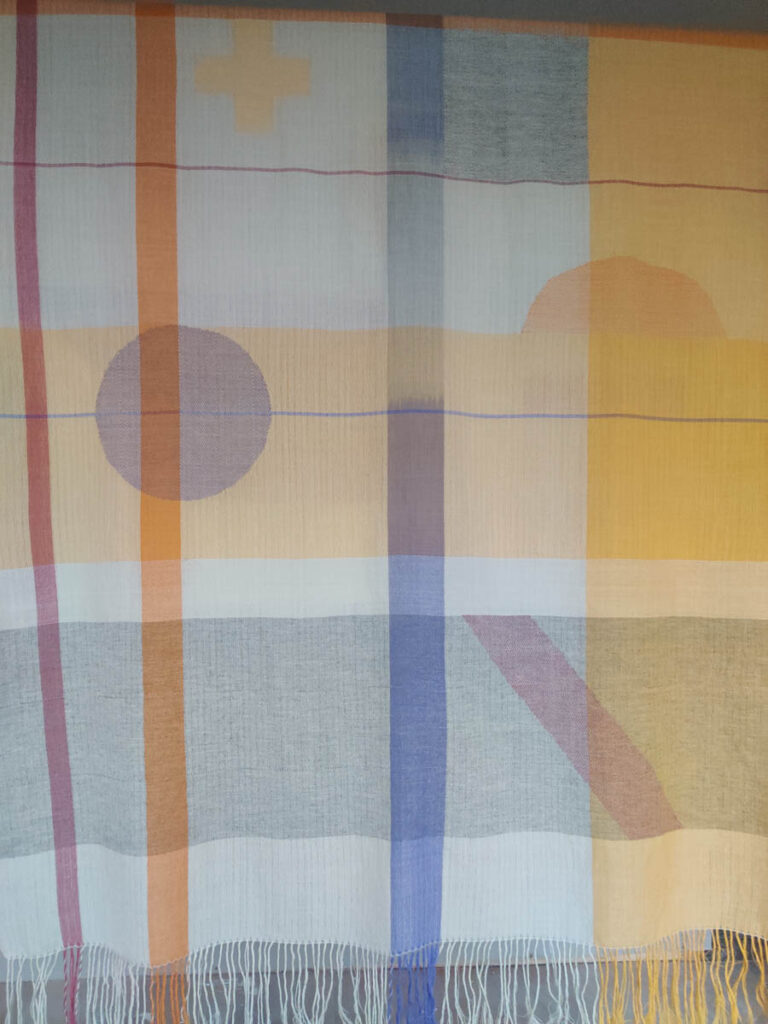 The looms of Ancient Greece were vertical as the cloth was woven upright using warp-weighted Neolithic era technology. The weights not only served a functional task of tensioning the warp threads but they were also used as votives.  The votive weights were offerings made by the weavers as an expression of devotion, promise and intention. They were usually stamped or engraved with a symbol to represent the Goddess the votive was in honour of. Although my cloth was being woven on a horizontal loom, I felt a strong pull to get to know the clay in my backyard and began researching how to make my own loom weights in another act of devotion, both to the Goddess Athena and to the craft of weaving in this current time and in this current place.

After separating the dirt, sand, rock and silt from clay, I dried the clay out in muslin cloth until it was the right consistency to work with to create the weights. I hand moulded the forms based on images I had seen in archaeological journal articles.  I left them to dry out in our sunroom for a day before etching symbols into them. These included marks representing the owl of Athena, and some of my own symbols, a simple grid weaving, a seven-pointed star, and a personal totem.

Once they were completely dry, my partner fashioned a kiln using a terracotta pot and hot coals. We placed the weights in the pot and smothered them with wood shavings to draw out the colours of the rich minerals within the clay. The weights baked and cooled and emerged with black colouring, indicating the element of iron present in the clay.

Creating the cloth and the loom weights helped me to process and connect my history to my present. My devotion to this craft to my good fortune was paved by my ancestors. From that time and place to this one. The last task was to present these items to her.

Divine Pallas Athene,
I dyed and wove this cloth for you, protectress, goddess of war, craft and truth.
A weaver, as are you.
I present this gift, in this time and place so far away from the processions and rituals of Athens.
I remember you now and act with devotion. 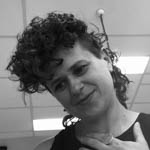 Ana Petidis is a Ballarat-based studio weaver who creates one-off cloth and tapestry works that communicate personal and shared stories through the considered joining of materials and processes. Grounded in her heritage and culture, Ana’s practice explores the connection to time and place through the entire process of weaving from fibre source to cloth creation. Follow @analog_cloth

Subtle cuts: New word sculptures from Ally McKay
Thailand residency: A string of flowers – a sequence of events
Maker mythologies: Classical origin stories for the crafts
One person’s culture is not another culture’s craft
Fragile threads: Baskets reborn in north Queensland
Weaving a koha
From village to suburb: How Karen weavers retain their culture as art
Nature craft