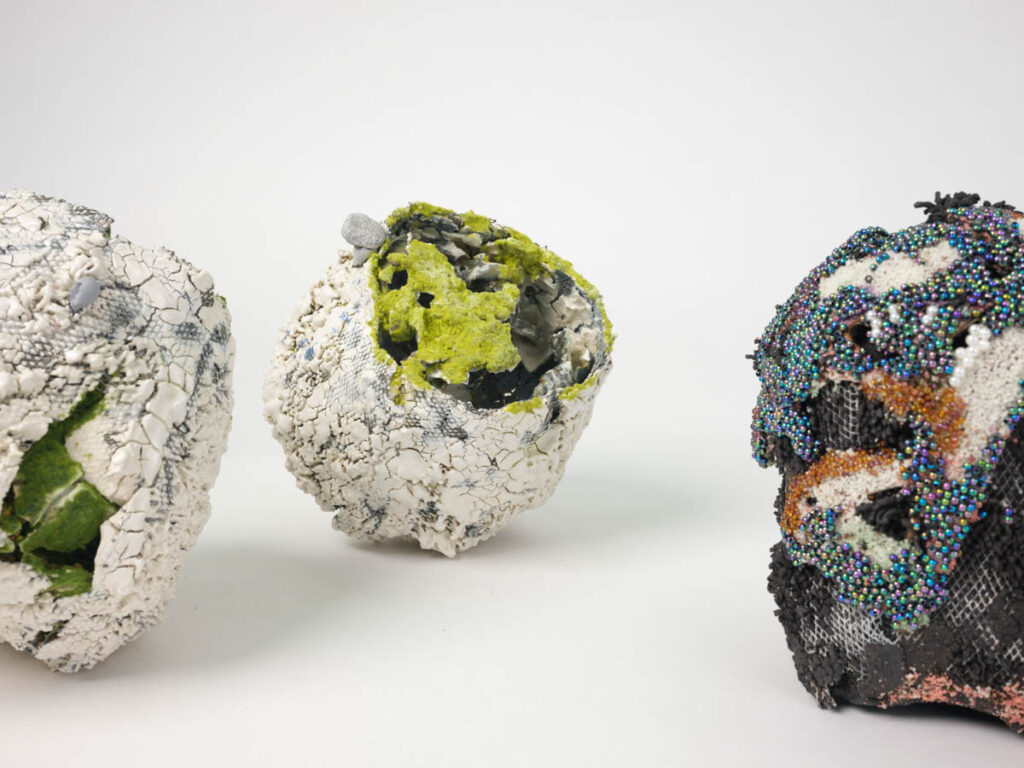 Fan Ji seeks intimations of untamed nature in urban laneways through clay that clings to the metal grid.

(A message to the reader in Chinese.)

Both my parents have been working in forestry departments, after graduating with a bachelor’s degree in soil and water conservation over 30 years ago. So, It is no surprise that I always remember them driving into mountain forests in suburban Beijing. Spending half a day wandering around writing and drawing in notebooks. Whilst catching a glimpse of attached worm eggs on the reverse side of leaves, then leisurely heading back to the office.

These explorations frequently happened on the weekends. The route consisted of honking cars, bustling urban streets, scaffolded new apartment buildings, and mottled crumbling walls. The stone was ruffled with broken edges. All of this flashed through the car window as I lay on the back seat. Insouciantly hearing my parents talking about the splendour of a view they saw from walking down an untraversed trail. I remember that a feeling of shuttling back and forth through time and space arose all at once. In the first second I was in a city of concrete and steel, and in the second phytoncides embraced me all around.

These memories, although hazy in youth, consisted of two conflicting parts. They are either rigid or organic; hard or soft; artificial or natural; eternal or fragile; invariable or dynamic. My understanding of the world shifted between the conformist nature of the city I inhabited and the wild organic form of the forest.

Influenced by childhood memories, my art practice always focused on nature-related topics. It is not until I entered art college that I discovered clay could be used to translate such duality and the interconnected world into something tangible. It best represents the essential substance for the existence and growth of all living beings. It represents nature, the hope of life, and the evidence of the potential power that can change things anew beyond human reach. It is clay that nourishes lives through its transformation from boggy ground to solid. 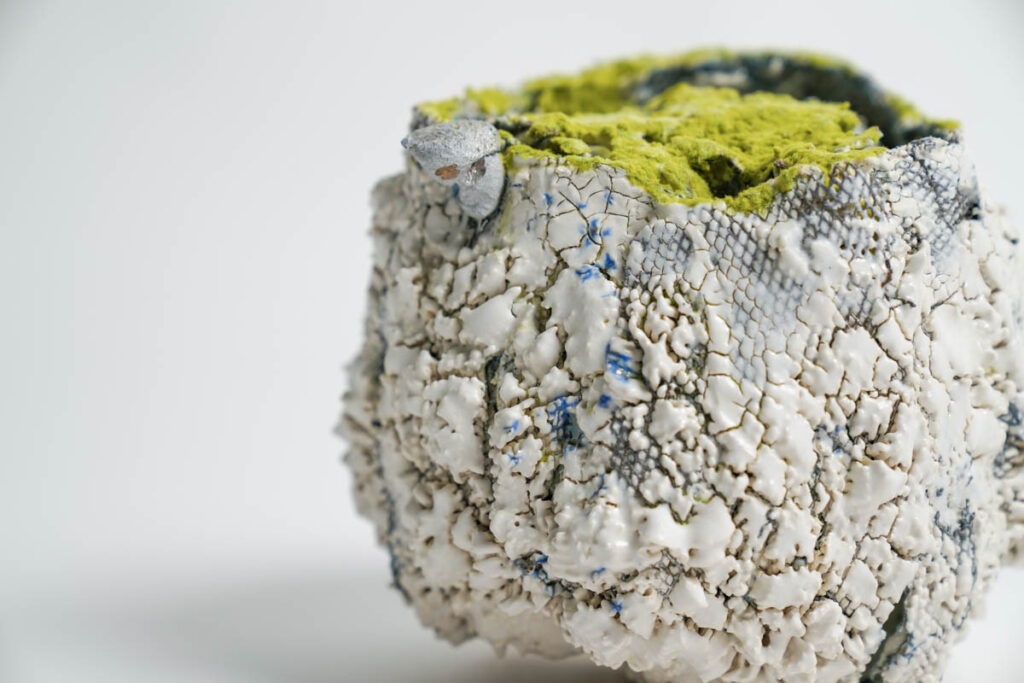 Driven by my burning desire for the interpretation of the living environment, sentimental representations of natural phenomena have gradually become a central topic in my research and ceramic forms. The exploration of dualities in living environments can be seen in my recent body of work the Earth Nidus series. The inspiration of which came from my daily encounters with those unseen natural phenomena in the city. As the highly manipulated environment has been created in urban areas for aesthetic purposes, the ecological essence of nature is subsequently neglected. Its function has been flattened. What people encounter in their daily life is the artificially embellished city landscape. Glimpses of green can be seen between buildings. Hedges were planted against metal fences to distinguish the private from the public. A potted plant on the desk manifests their love of nature to the largest degree.

Steven Vogel puts it in the book Thinking Like a Mall, “If nature’s value derives merely from its value for human beings, then it seems plausible to imagine that artificial substitutes for natural objects could in principle be produced that would provide the same kind of value, or if they could not be produced it would be for contingent reasons having to do with the limits of our technologies and not fundamental ones having to do with the difference between natural and the artificial. ” (2016, p.98) Following his thoughts, if the organized nature in cities has completed the mission of enhancing city attractiveness, then what is the reason for loving the real unfiltered nature? Most people don’t need to care about the wild world beyond their own life. It is such an astounding assumption that makes me wonder, how real natural experiences can fragmentarily fade away into memories in the modern age.

I was eager to find evidence for the existence of real nature: nature alive in the urban spaces where I live, as well as a nature that is growing beyond the control of humans will.

I walked down every alley on my path to college and home, trying to capture all possible vitality. Noting, how the strong tree branches entangled with steel grating, the grass grew out of brick joints, and the vines sprawled along the wall of an unused building. They all declared their legal sovereignty of the land and appeared to no longer be accessories only designed to enhance the attractiveness of the city. They live their own lives, sharing the same oxygen and sunshine with us. They are equally alive.

I was fascinated by this unseen nature, trying to figure out how I could translate its ubiquity yet overwhelming power into a ceramic form. By incorporating different materials into one integrated object, my practice considers the philosophical idea of Object Orientated Ontology, which rejects anthropocentrism and the idea that nonhuman objects should submit to human power. Organic and non-organic materials are employed equally in my creative process, no matter where they come from nature or an industrial factory. Consequently, the nature and equality of object relations are what is highlighted in this context. 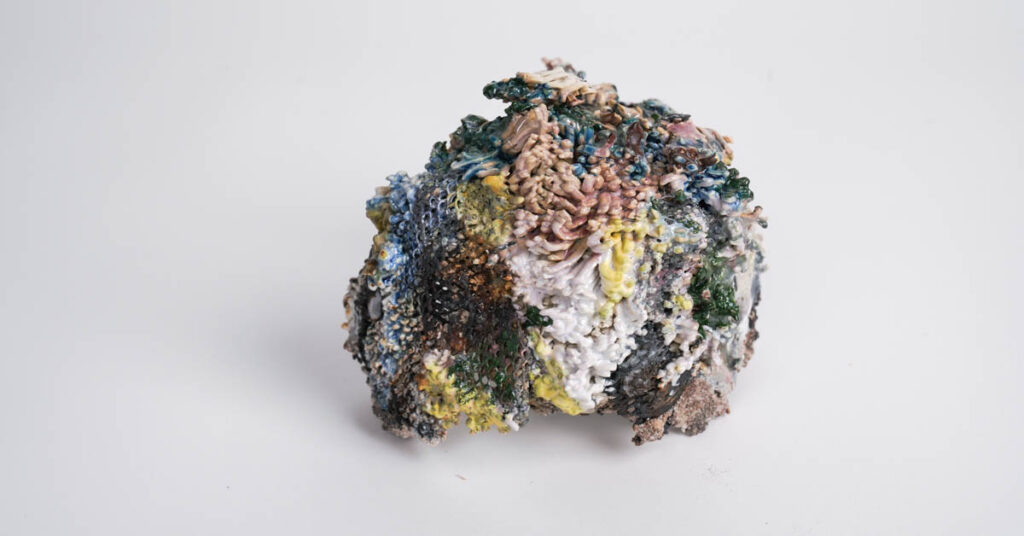 To achieve this, I fired clay with metal mesh intertwined in vessel forms as a metaphor for the interaction between nature and the built environment. Unfired clay has plasticity and natural movement. I use these material qualities to emanate natural lifecycles; the clay performs between my control and its autonomy. The metal portion in my work erodes during the firing process affecting the formation of clay in both visual and chemical ways. In this body of work, I created a surprising material symbiosis by pushing clay through the aluminium mesh. This imitates the coexistence of natural lives entangled with artificial ones, while technically keeping the making process integrated with the physical outcomes. It highlights the most neglected aspect of nature, and more ambitiously, depicts an apocalyptic turn in human-nature relationships under the Anthropocene. In the meantime, it manifests the interconnectedness of life and all living things.

Although my work doesn’t portray any specific human figures, human traces can be found in every detail. The metal mesh is produced in industrial factories. In addition, the embellished surfaces consist of flocks, sponge particles, and plastic beads. The flocks are usually for textile making, and shiny plastic beads tell a story of someone’s love for living a colourful life. Some are organized along the edges and forms, while others are added organically and chaotically. They are all speaking in a human voice. The world is created by us, but we coexist with nature. It’s all about symbiosis.

Thinking about the interconnected human-nature relationship is always a big project, which has puzzled countless environmentalists, philosophers, and scholars. What I am trying to do is to reveal the city dwellers’ encounters with nature. Through ceramics forms, I have explored the visual possibilities of an imagined post-human world and its regeneration.

Vogel, S. (2016) “The Nature of Artifacts,” in Thinking like a mall: Environmental philosophy after the end of nature. Cambridge, MA: MIT Press, p. 98. 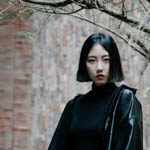 Born in 1997, Fan Ji completed her MA at the Royal College of Art in 2022. Fan is originally from China and now living in London. She chose to be a creative practitioner in the field of ceramic art because of her passion in making as well as the idea of combining contemporary issues with traditional techniques. As both a craftswoman and a contemporary artist, Fan’s practice looks at space, unperceived human feelings and microhistory, often in relation to questions about interactions and manipulations. Her practice also touches upon themes of power, hierarchy, materiality and nature, which she uses to discuss the relationships between humans and the environment we inhabit. Fan’s practice is studio based and she works for exhibitions and commissions. She has ambitions to work in larger scale through residencies and to expand her research to communities and other public spheres. Visit ji-fan.art and follow @jifannn_.