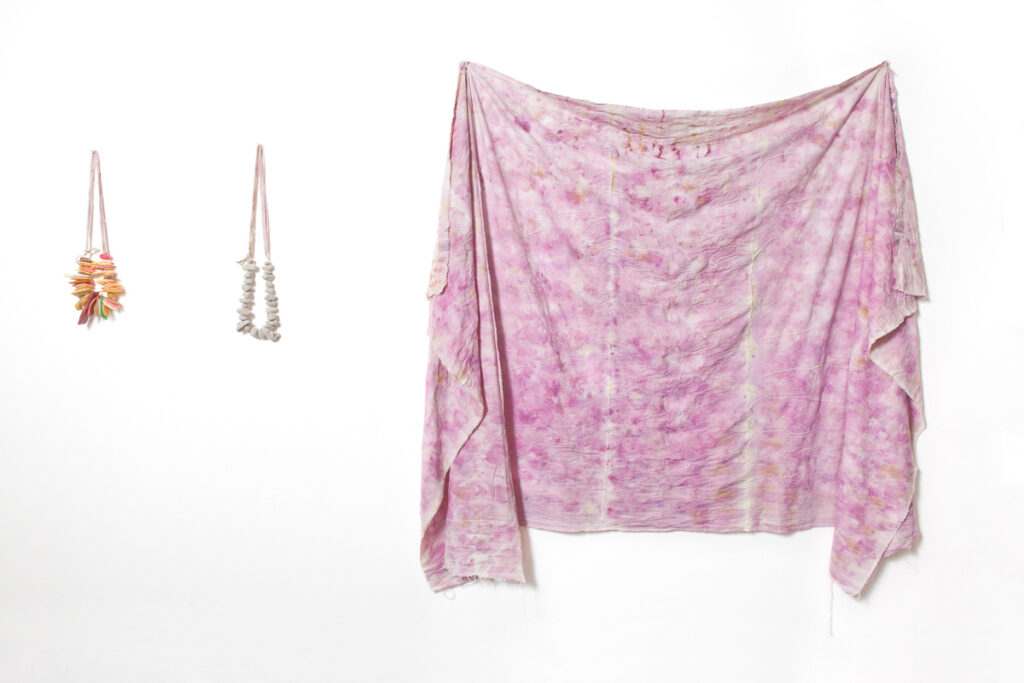 Michele Elliot uses wrapping as a ritual to reflect the passing of life.

Here on Dharawal country, these last few months have been awash with La Ninã’s storms. As I sit writing, the rain is pounding in from the Pacific Ocean in diagonal sheets. Yesterday I walked down to the beach to watch the waves. You can see the moisture in the air. The horizon is barely visible, the sea and sky fused in a heavy wet haze. Five days of relentless rain, dams overflowing, rivers have burst their banks all along the coast. I watch footage of people dragging a horse from floodwater. A man tries to revive the animal with the full weight of his body. I mourn with them and imagine a blanket to wrap around its spent body.

The work of textiles and its connection to the human sits at the centre of my practice, in the language of material. Joining, wrapping, binding, stitching. Stringing things together, whether in thought or in material, manifests the tangible. Or sometimes the intangible. It isn’t always possible to know what is being made until it has been completed. Making, for me, is imagining. Making is propositional.

The privilege of practice, of making, comes with the sense of responsibility to materials. When traces of the past are bound up in those materials, we behold the work of time. Consequently, in the time and space of the making process, that is, in the present, objects and materials are re-membered and imagined into the future.

I gravitate to fragments, to the remains, to that which is left behind. I move back and forth and loop around, revisiting old works to begin new ones. The threads are there.

“the worn” is a collection of fragments that were unknown to each other until I heard their whisperings. I gathered them together and listened more closely. The element of water runs through them, the element of time is contained in their materiality.

“the worn” is a conjunction of disparate remains. Pebbles of soap that have washed hands and bodies; stones, light as a feather, spat out of the sea. And a patched cloth for wrapping. These are memorial objects, re-membered. 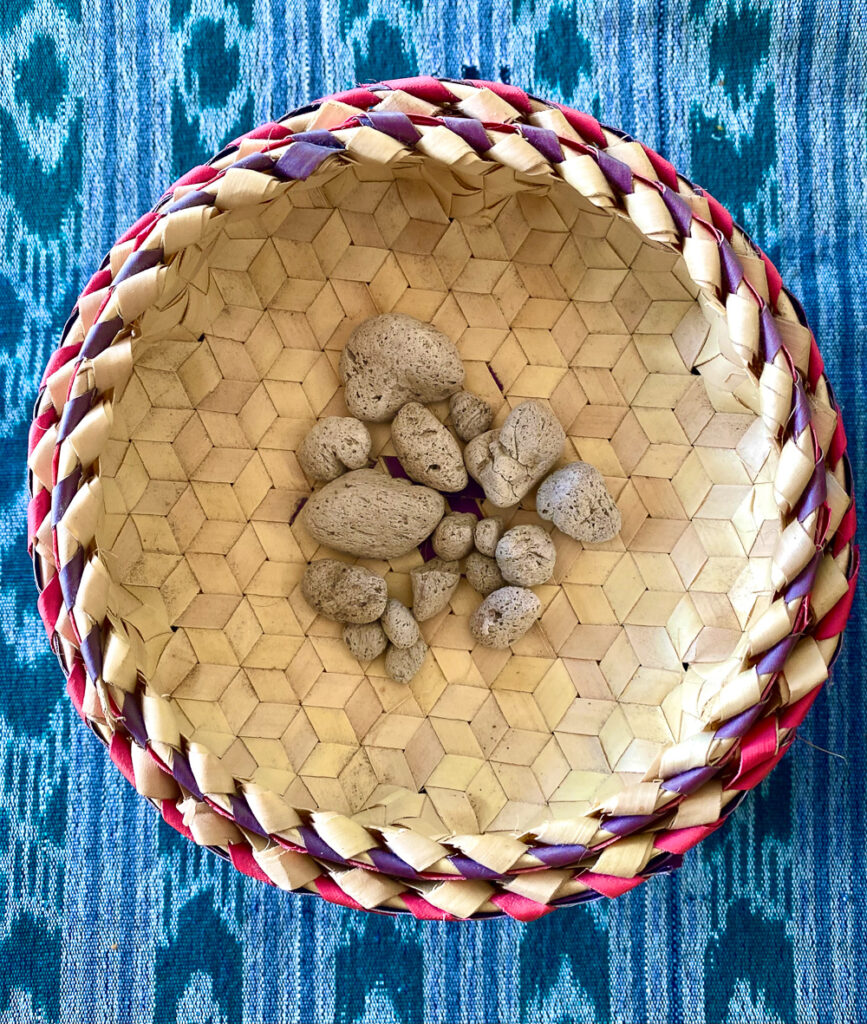 I live on the coast, below the Illawarra escarpment. I walk along the pathways and beaches with the sea by my side. I stop and pick up objects, feel their weight and texture, a shell, a bone, twists and curls of dried seaweed. Mostly I put them back.

I’m curious about other people’s collecting decisions, their choices over what to leave and what to take. Sydney artist and friend, Rox de Luca, collects plastic litter washed up on beaches around Bondi and Sydney Harbour. She painstakingly threads them into beautiful and terrifying garlands, rendering visible the waste and pollution filling up the living ocean.

I’ve accumulated a collection of small pumice stones. They are found scattered up amongst the grasses and on the sandy paths at the beach. They are the remnants. While walking, I sometimes pick up a piece, put it in my pocket and bring it home. They rest in a handwoven basket.

In 2013, the Havre Seamount submarine volcano erupted, creating a massive pumice raft. It is located in the Kermandec Island archipelago to the north of New Zealand/Aotearoa. The raft drifted westward and began to amass on the shores of eastern Australia. The stones appeared on our beach and up and down much of the east coast. The scale was incredible.

Pumice is confounding as if made of air. Igneous rock, highly vesicular, roughly textured. Expelled with tremendous force, it is formed by the rapid transformation from molten lava to the lightest of glass.

In that same year, millions of shearwaters washed up on the beaches of New Zealand and the east coast of Australia. The phenomena had puzzled researchers until recent findings revealed that many of the birds had ingested small fragments of pumice.

One string, of pumice. A set of worry beads from and for the sea. 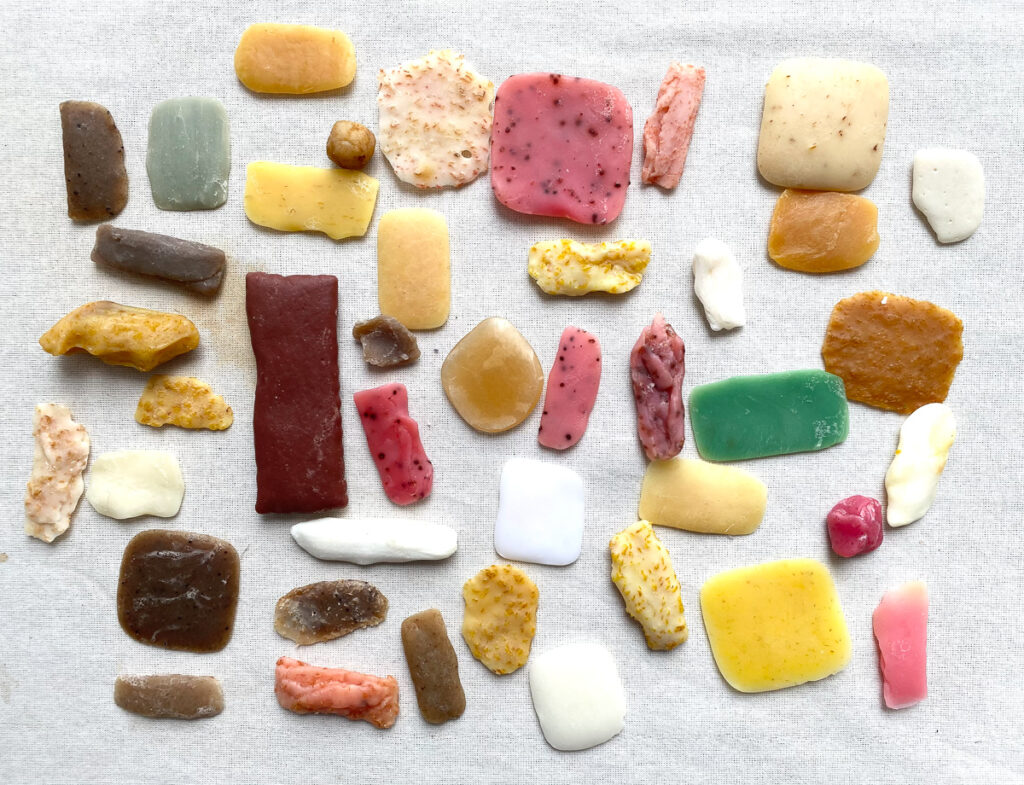 Memories from my grandparents’ bathroom. Black and white tiles on the walls and floor. A slatted wooden shelf, painted white, fits neatly across the bathtub. It holds soap, flannel, a scoop for sluicing and a palm sized pumice stone. The pumice fascinates me. It weighs almost nothing. One side is flat, the other is an angled dome. The breeching back of a tiny grey whale.

Accoutrements for washing the body.  The daily ritual of cleansing, the healing properties of water.

Another string, of soap. Worries washed away. Only the remains. 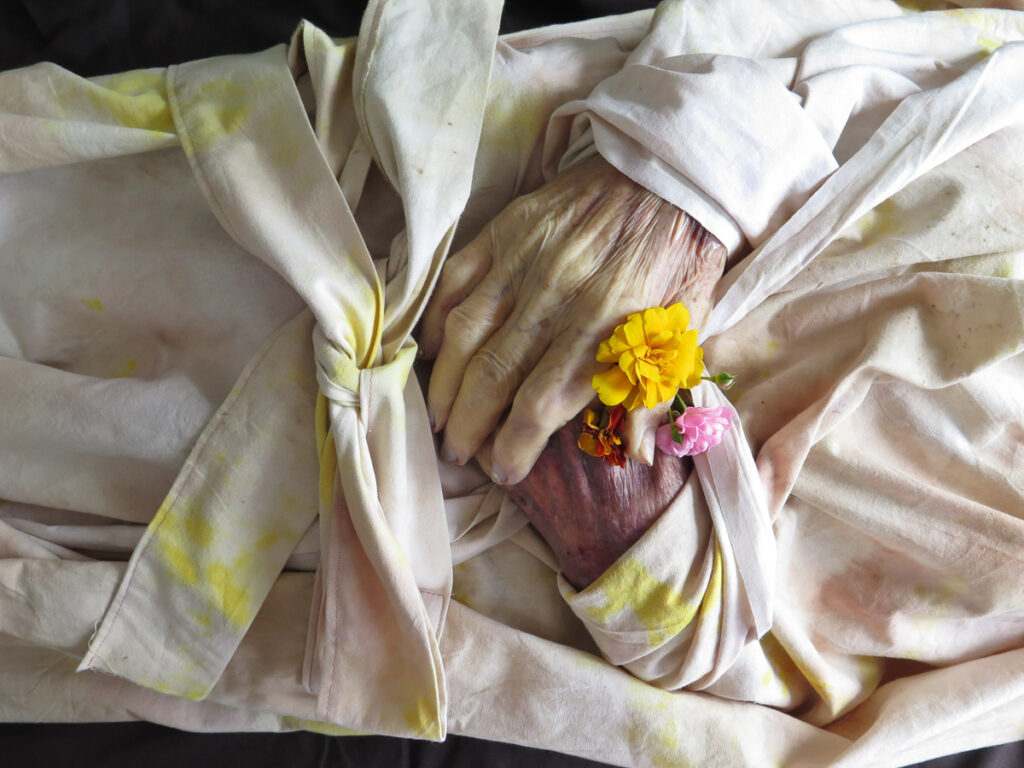 When my mother died in 2019, I made her a shroud. I foraged and found flowers with which to dye the cloth, each one chosen for places she had lived. I used spices from my pantry to scent the cloth with memories of meals cooked and shared. I added a cup of seawater for her final journey. Acutely aware of time stretching in both directions, I was wholly in the moment of a continual present. There was nothing else. I remained in a space of stillness for days. I walked to the beach and collapsed into the waves. Salt, sea, salt, tears. Edges dissolved, bathed by the ocean, inside and out.

In 2017, Jodi Phillis, Malika Reese and I began an extended residency as artist and musicians at Tender Funerals, a community not for profit funeral service in Port Kembla, New South Wales. We were engaged for two years to work with families and community, thanks to funding through Create NSW.

Wrapping as ritual became part of my project. I created a series of “tender cloths” using funeral flowers donated by families. These flowers are most often discarded after a funeral, when the casket reaches the cremation stage. The cloths were made from muslin, in consideration of swaddling for newborn babies. At the end of a life, as at the beginning. I used natural dyeing techniques with petals and botanical materials to imbue the cloths with the gift of care, from one family to another. The cloths were used in Tender’s mortuary in service of people who may not have had family or who came into care in difficult circumstances.

The third component of “the worn” is a large cotton cloth, stitched in three panels and printed with remnant funeral flowers. Some of the rose petals were leftover from my mother’s shroud. I kept them in the freezer, waiting for the right time. A mourning cloth for the times, for the very near future and what soon unfolded. 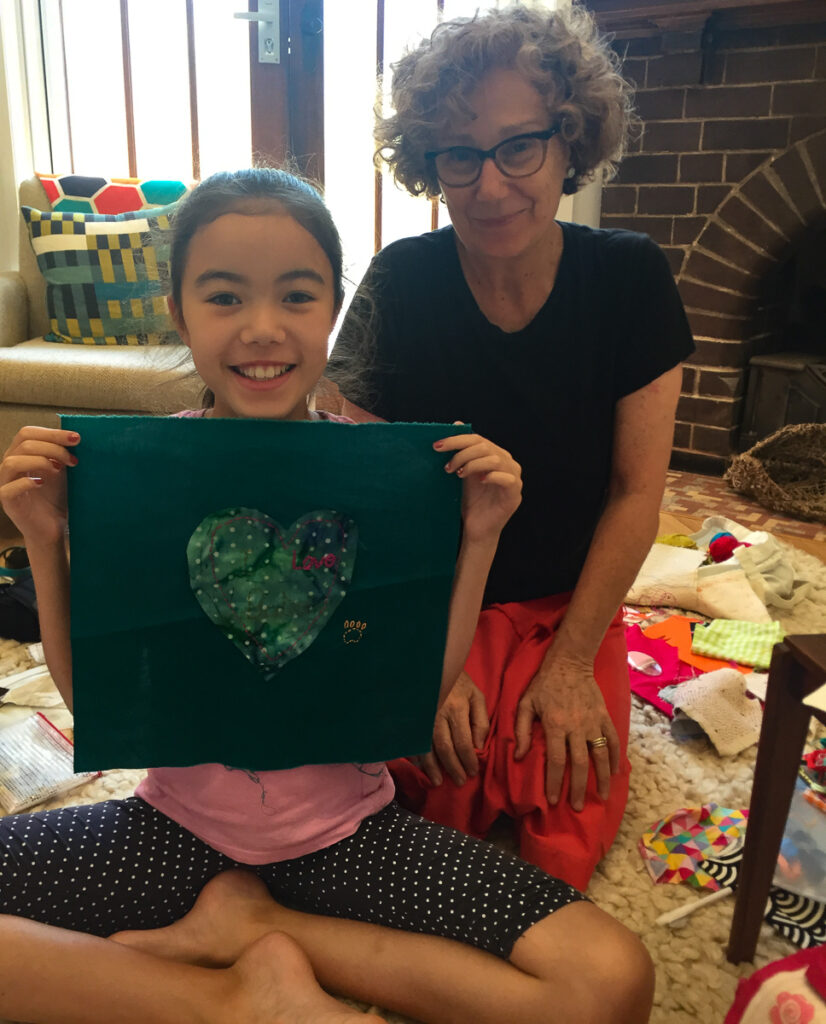 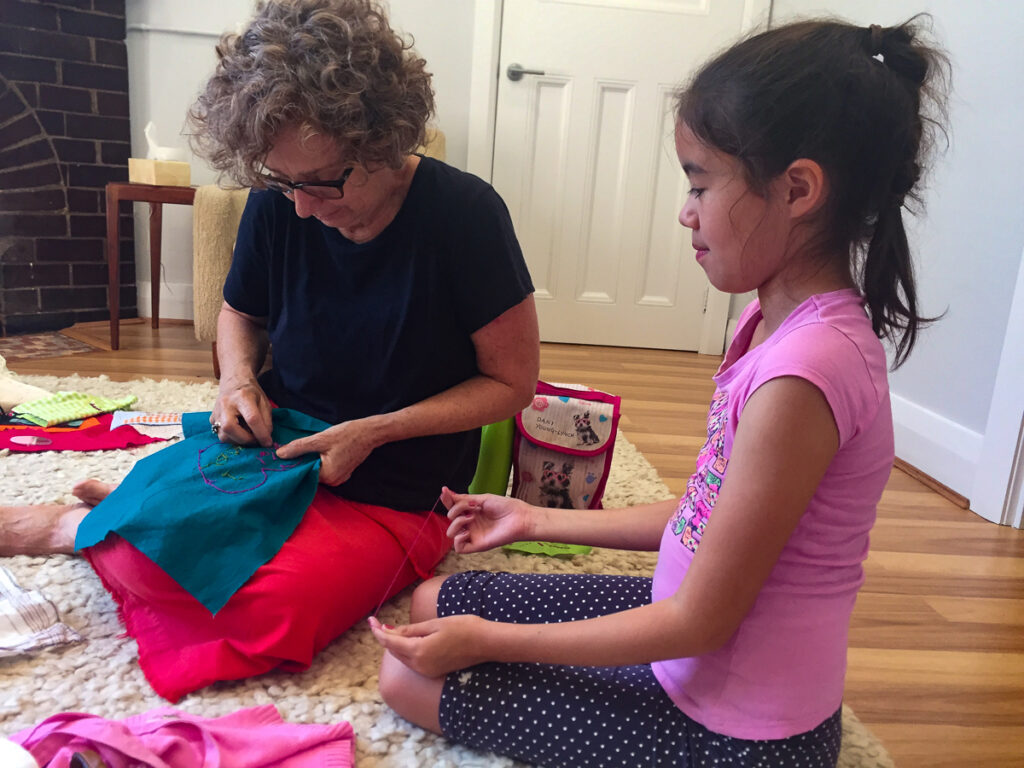 Michelle Hong and Dani Young Lynch were the first Tender family I worked with. Michelle’s partner and Dani’s father, Brian Lynch, had died after a long illness.

Michelle came to wash and dress Brian’s body, to spend time with him and say her farewells.

In another room, I sat on the floor with Dani, atop a white rug. We spread out pencils and paper and fabric and thread. We took off our shoes. We talked with no sense of urgency. Dani brought a drawing with her. She shared stories of her father. She spoke about not having cried, and she thought this worried her mother. She did cartwheels on the rug. She had a tiny paw print on her hand. In her father’s final hours, the three of them stamped each other with the paw print. An intimate, playful and ephemeral gesture of connection. An acknowledgement of its inevitable disappearance. Holding on and letting go.

Between cartwheels and conversations, Dani made her first embroidery. She chose a detail of the drawing, a heart within a heart, a message and the paw print. The hours passed and it seemed to be right. The embroidery complete; the time arrived. We did not know what that was or what it was to be.

The work that Dani made, a simple embroidery, was transformative. Unbeknownst to the three of us, she had built a bridge. Dani wanted to see the paw print on her father’s hand one last time. She asked for the cloth to be placed on his face, and then walked across that bridge, with courage and love, towards her father.

Here within this window, I witnessed the past ever slipping by, in the gestures and actions of stitches and words. It is created in the present moment and gifted towards an unknown future. 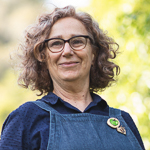 Michele Elliot is an Australian artist and educator, living and working on Dharawal country, near Wollongong, New South Wales. Her practice extends across textiles, installation, drawing and sculpture and she has exhibited widely across Australia as well as in Singapore and India. In recent years Michele has been working in the area of art, health and community. She runs a Sewing Circle for Tender Funerals, Port Kembla and facilitates stitching workshops for Makeshift, an Illawarra based social enterprise focused on creativity and mental health. Michele is one of several artists in residence working on knowledge translation, the Maridulu Budyari Gumal SPHERE KT Platform. Areas of these research projects include people living and working in the space of palliative care, carers for people living with dementia, and maternal health. She is also building a tiny orchard in her garden.

FRACTURE - show on textiles at the Devi Art Foundation
Spinning a Yarn Unparalleled
Silk from San Pedro Cajonos: Artisans weaving new connections through the web
A visit to TÜR Studio
淡路・阿波人形浄瑠璃の衣裳が生きていた景色
Tecuil Alessia: Preserving the heart of the prehispanic kitchen
Wissa-Sophy: Back to the woven garden
Double Happiness