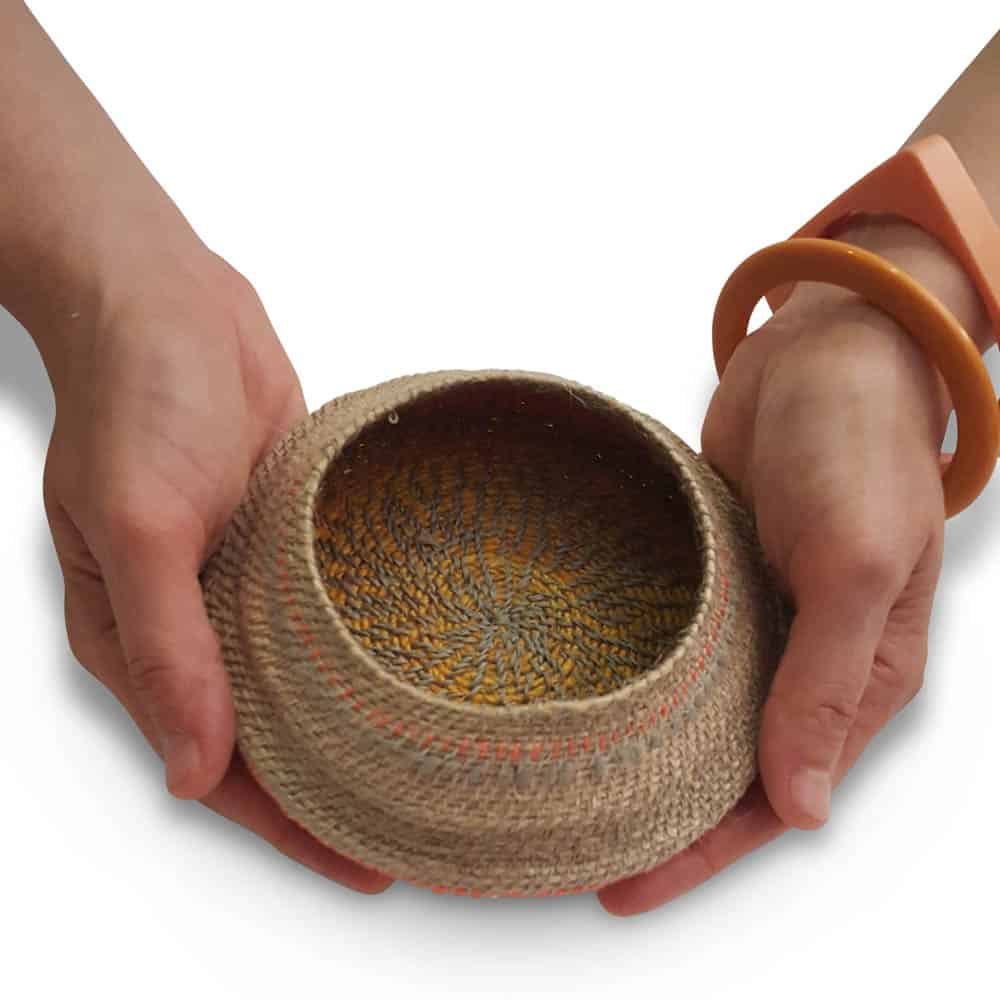 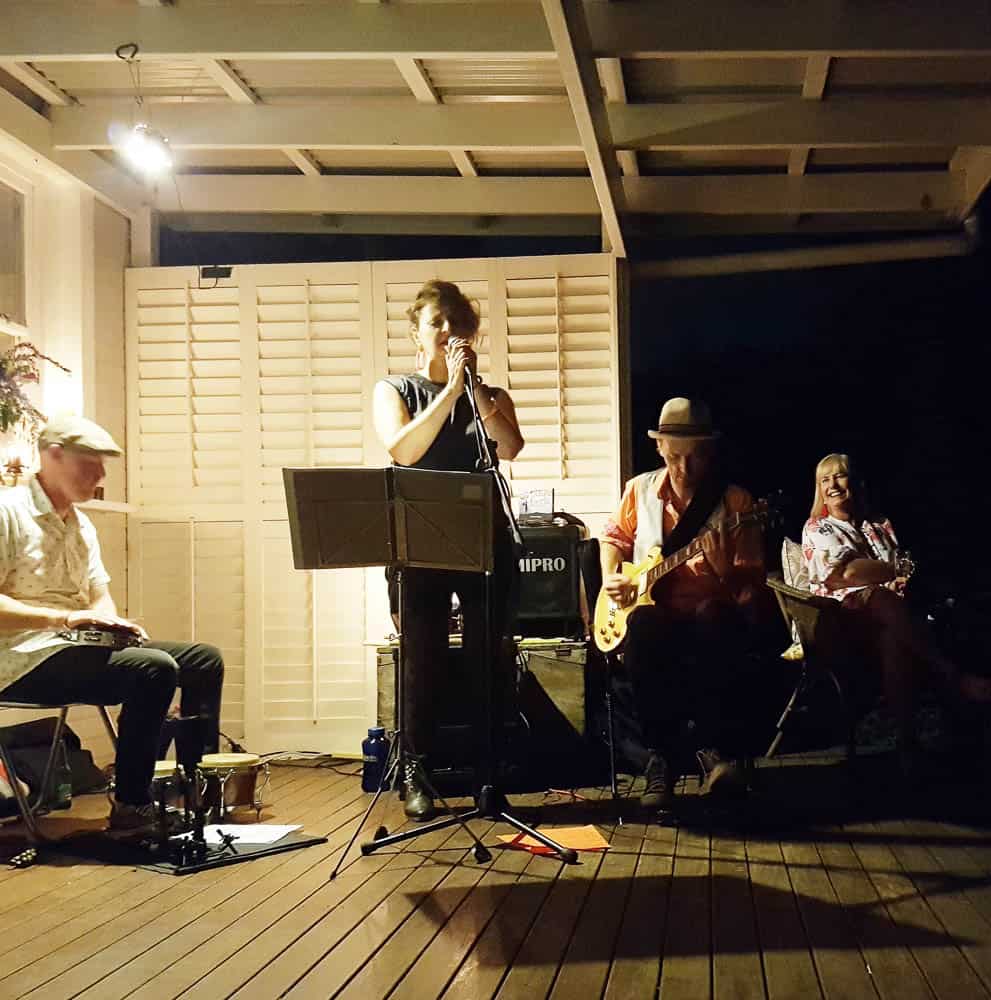 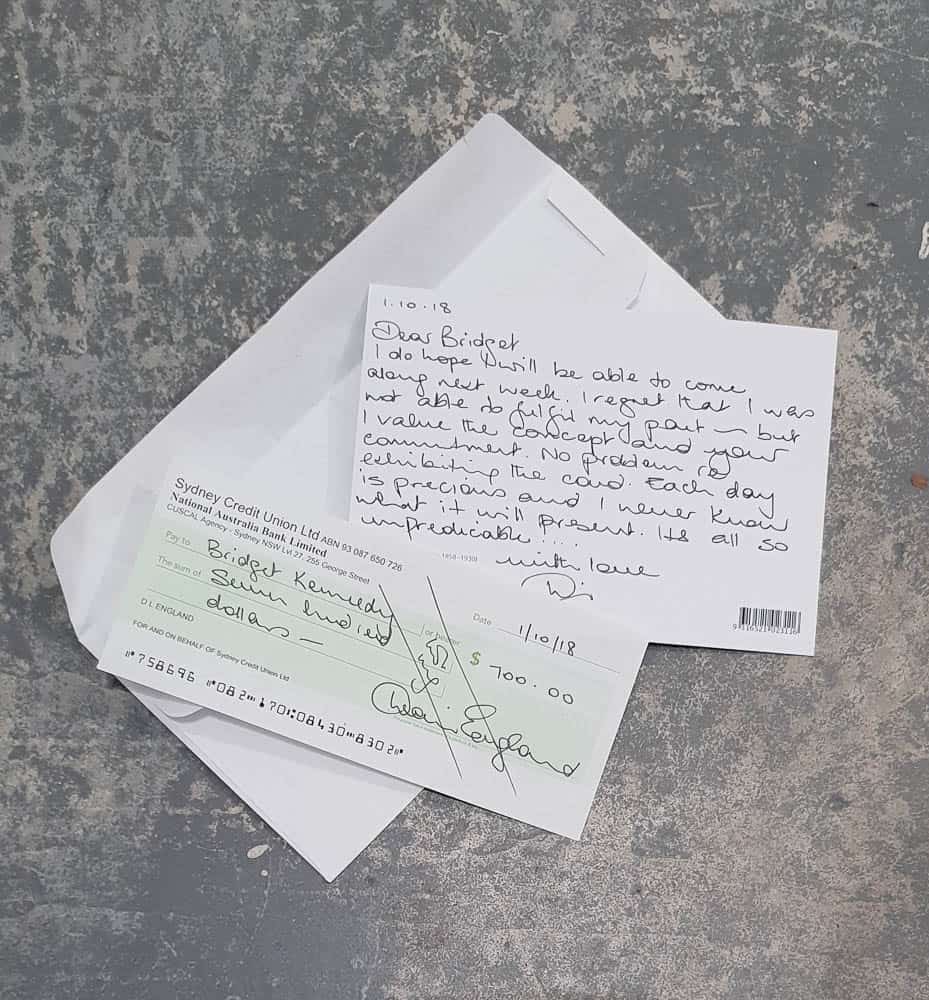 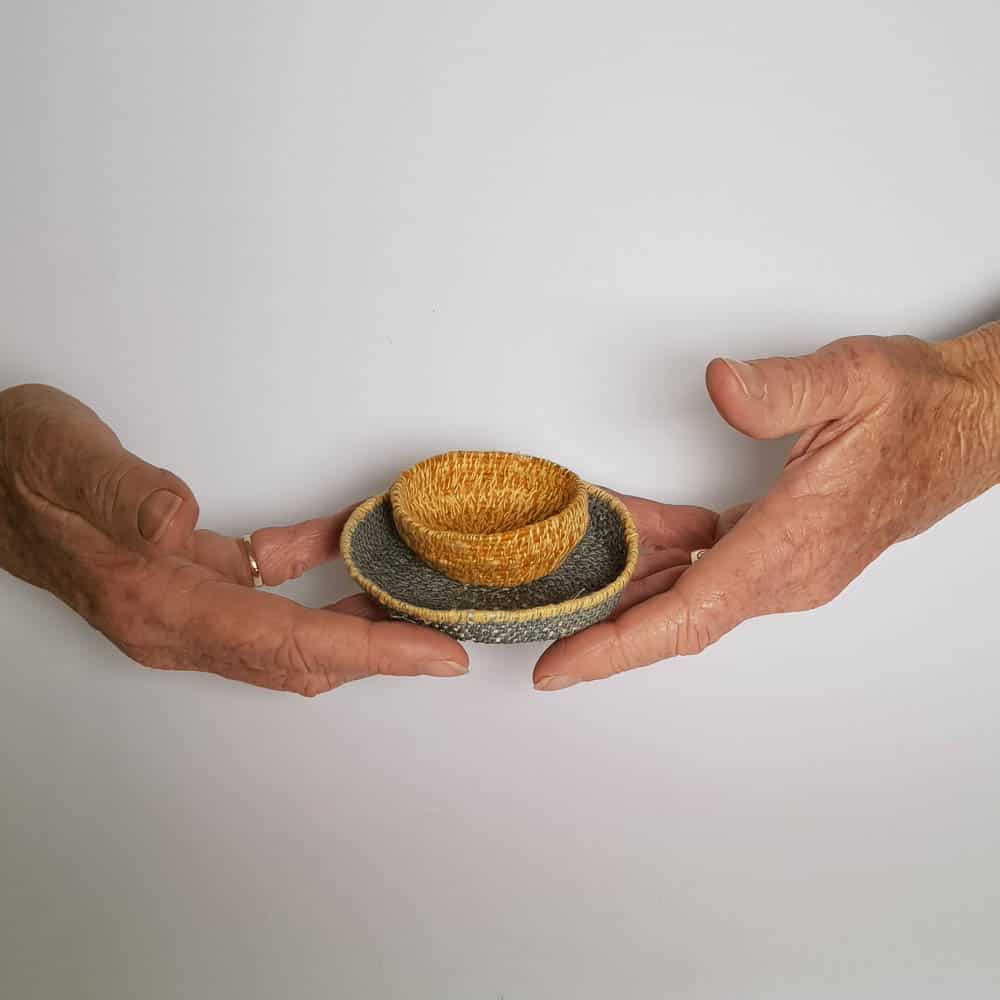 As a contemporary jewellery and object artist who also runs a jewellery and object gallery, it was probably inevitable that the interactions which occur daily in my “gallery-workshop”  between myself, the jewellery object and the visitors who enter the space, would eventually seep into my exhibition practice.


This aspect of my practice became an integral part of the Year of Time Project, which also explored notions of time, material and cultural value, the materiality of the physical form and impermanence.  The project took place over two years, one year of making (and then exhibiting the resulting installation) and one year of exchanging, culminating in an exhibition showcasing the time, knowledge sharing, and objects that had been exchanged for my vessels. The initial installation was made of 60 small hand coiled objects, primarily made from linen and other threads (primarily sourced from existing materials in my home), and recycled plastic shopping bags. I specifically chose this medium of crafting as traditionally it is seen as women’s work and deemed to have a low perceived value (as recently as May 2018, Education Minister, Simon Birmingham made a disparaging and insulting remark comparing TAFE changes to subsidized “basket making”), yet can be labour intensive. I kept track of every minute spent making the objects and honoured this by stamping the minutes on a small silver disc that was sewn to the bottom of the vessel. The work was displayed as one installation, representing a physical scaled version of a year of time, 17,520 minutes of making.

I then invited the public to “purchase” the vessels by giving me the same amount of time back for the piece they were interested in, or to pay cash by choosing themselves the hourly rate that the item was worth. For many, the idea of choosing their own monetary value of my time was confronting. Many chose to exchange time. Whilst I collate a lot of information on the interactions that take place with each participatory project I undertake, the reason why they chose this was not included. But from the resulting correspondence that took place, some of the reasons were: they responded to the concept; they wanted to be involved in a creative project; they enjoyed the social aspect and skill share; they liked the idea that it subverted the hard currency economy, and they admired my practice and wanted to be a part of it.

Over the following year, after the initial public exhibition of the work, exchanges continued to take place, including those from people who found me via social media. The objects and their resulting labour exchange became a conduit for forming new friendships, for introspection on the value of time, and in some cases, highlighted participants issues around time management, priorities and the looseness of time.

Of the many exchanges that took place, two stand out for me. One was an object that was exchanged with Laura for eight hours and eleven minutes of singing. This exchange grew into another project, Sing and Soul, resulting in a lovely evening of song in four languages, with over 40 attendees (many of them other exchange participants) raising money for Ozharvest. Another exchange was with Di, who told me she loved to cook and had planned to exchange her time cooking for the Sing and Soul Ozharvest event. Sadly, she became seriously unwell during the following months and was unable to do this. She did, however, pop in before one of my gallery exhibition openings, with a lovely tray of food. Eventually, she realised that she’d be unable to fulfil her exchange for her two selected objects and choose to provide a very generous cheque instead. When the final exhibition of all the exchanges took place, her husband drove her straight from the hospital to attend the opening. I felt incredibly honoured by her attendance.

I strongly believe in the importance of craft and the handmade and its ability to connect us to our humanity. For me, these types of projects generate a richness and community around my practice that is so much more rewarding than the often solo act of “making”. It also builds on the cultural activity that’s been generated around the gallery here in the locale of North Sydney, where my gallery, with the generous support of North Sydney Council, landed two years ago. 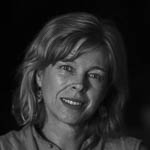 Bridget Kennedy is an Australian Contemporary artist currently living and working in Sydney. With a background as a painter and contemporary jeweller, the use of diverse, non-precious and organic materials with traditionally precious materials in her exhibition work continues an ongoing enquiry into environmental fragility, impermanence, choice, social expectations and value. Bridget’s formative years of early childhood were spent in Fiji and the South Pacific. With cultural ties to the Philippines through her life partner, these influences and exchanges have informed her practice. She is the director of Bridget Kennedy Project Space.

Linda Brescia: Holding Up The Sky
Fresco comes to the mountain
Where I came from
Jumaadi’s garden of shadows
Pilwas: Knotting Lafkenche narratives in Puerto Saavedra
A revolution from the kitchen at Rumah Intaran
Charlotte Haywood: Weaving ideas
Editorial