Bridewealth of the Dayak Lundayeh 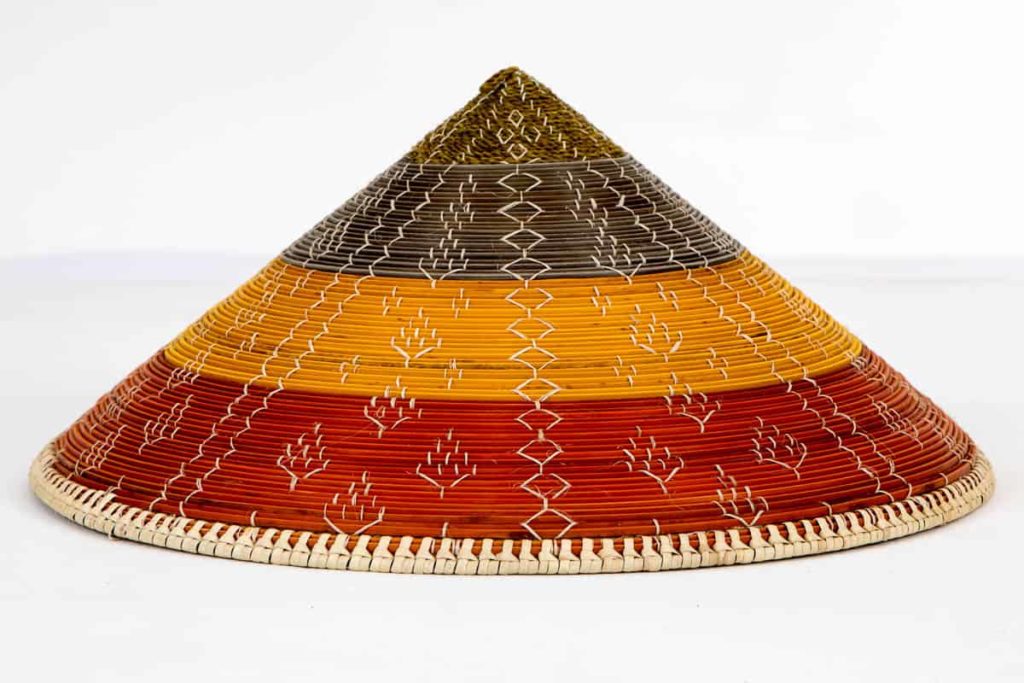 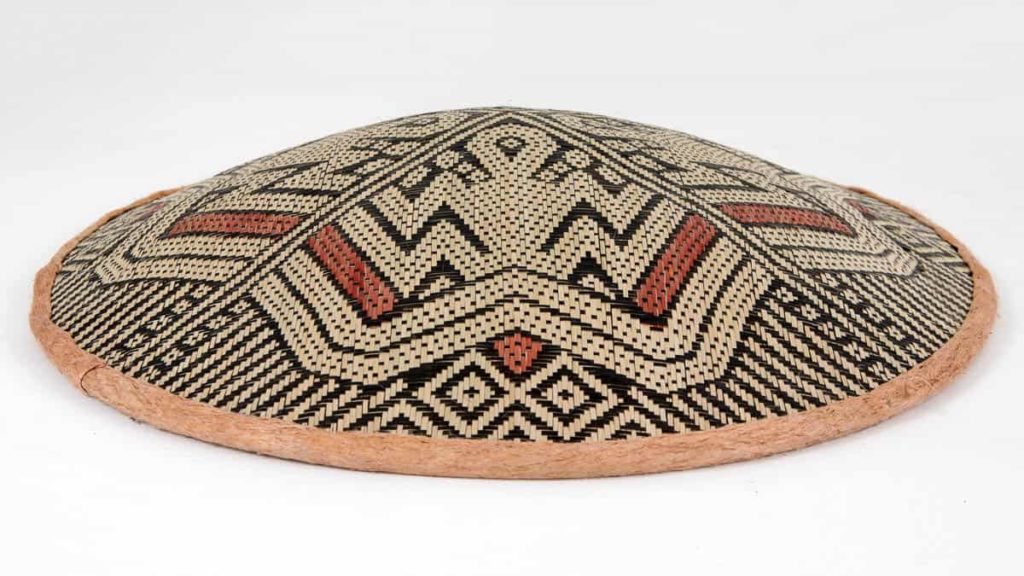 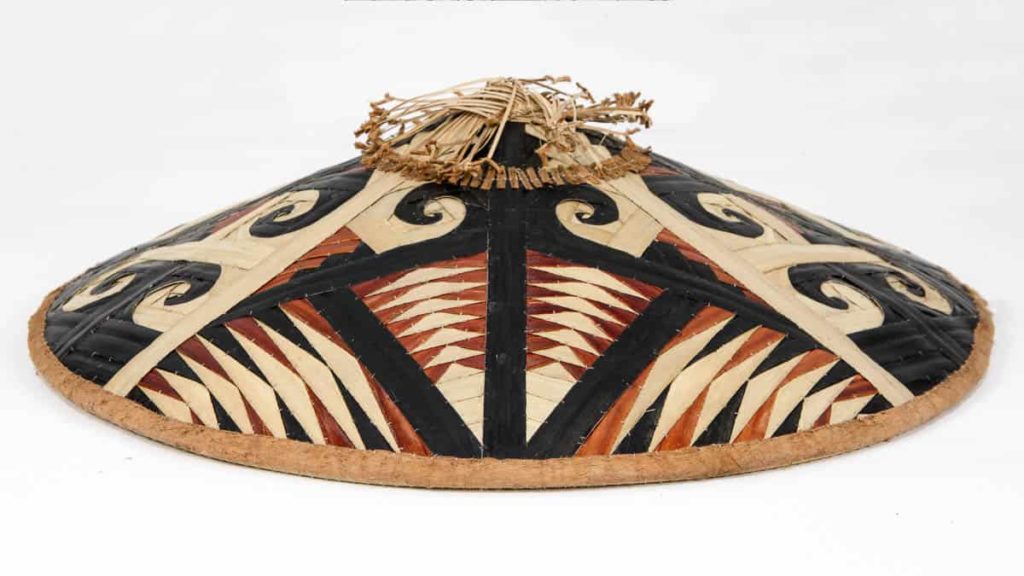 The pert conical form of the Lundayeh raung basung (sunhat) contrasts with the broad decorative cahung kalung and sa’ung seling sunhats of the big river Dayak communities. Coloured kinangan palm fibre is coiled and stitched together with banana stem fibre in four wide horizontal bands to form simple motifs. In contrast, the cahung kalung is formed by arranging stitched pandanus fibre strips and the sa’ung seling by plaiting anthropomorphic figures from bamboo. The traditional rim is also distinct – rattan lashing for the raung basung and bark for the river sunhats.

Perhaps living in the Krayan highlands of North Kalimantan isolated from other Dayak communities by distance, geography and treacherous river rapids has triggered this Lundayeh creativity. The altitude and rainfall of the highland district produce fibres for weaving and plants for colouring that are different to those used by other Dayak communities. 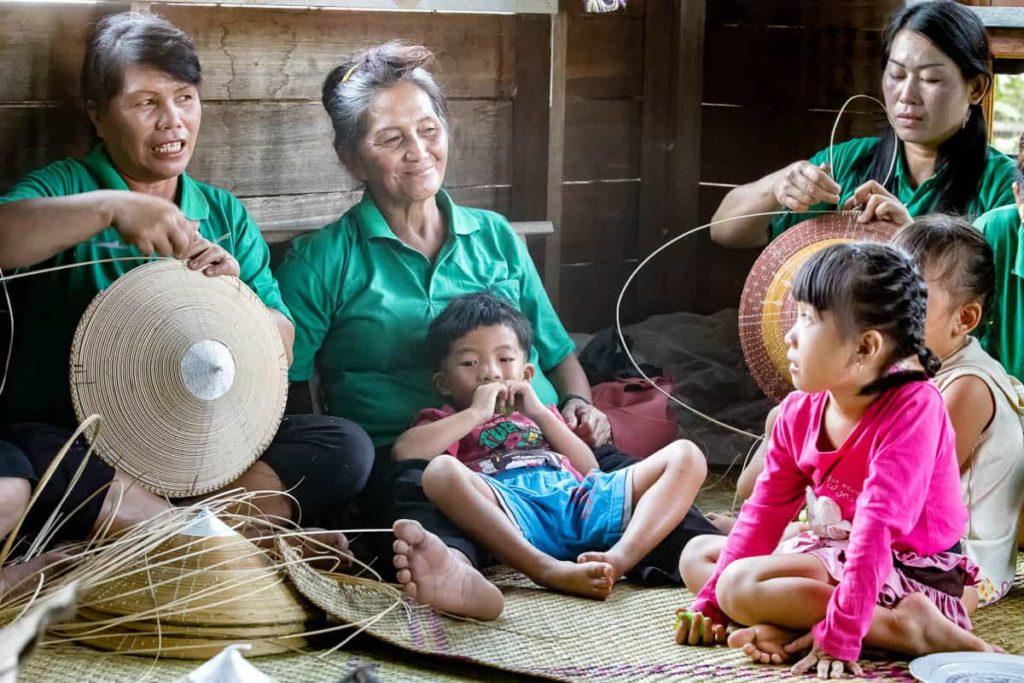 Near the Krayan capital of Long Bawan is a hill with more tree cover than any other nearby area. In the early morning, it is swathed in mist—cool, green and ever so slightly mystical. Locals’ ancestors believed it to be a place of spirits. Kinangan, a local palm, grows abundantly here, and from it the Lundayeh women make the fibre they coil to make the raung basung (sunhat). 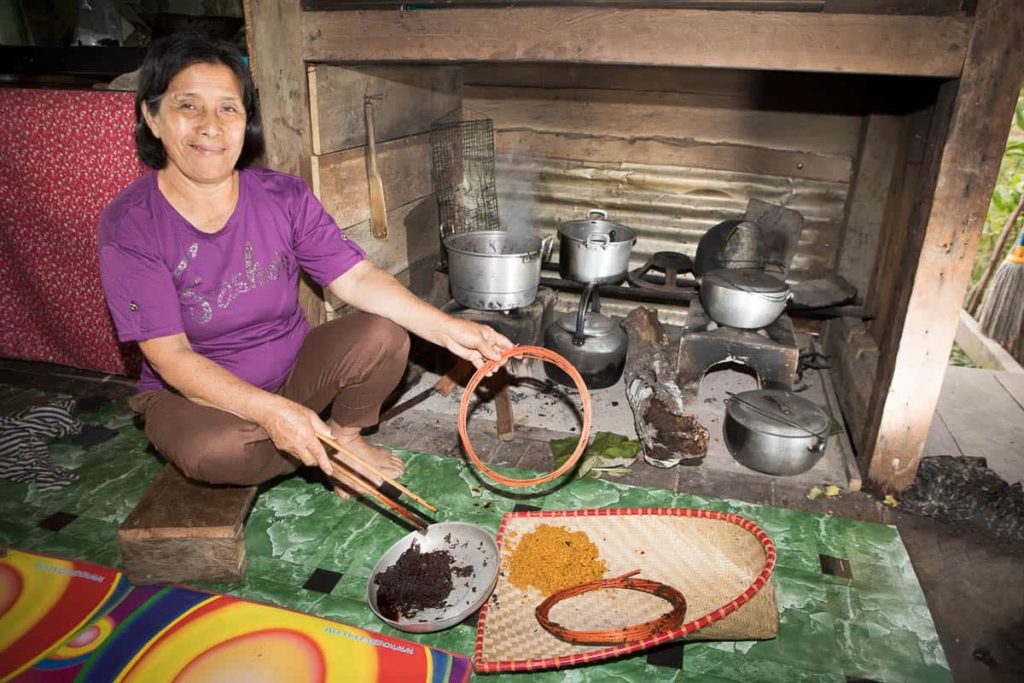 One must be assiduous to be a natural dyer. As an example for shades of pink to orange, the women cultivate and harvest ipang siaq leaves from their farms. Then, two strong women alternately and rhythmically pound their long heavy wooden rice pestles into a mortar. Pounding the leaves releases the dye juices which are boiled with the kinangan fibre to colour it. 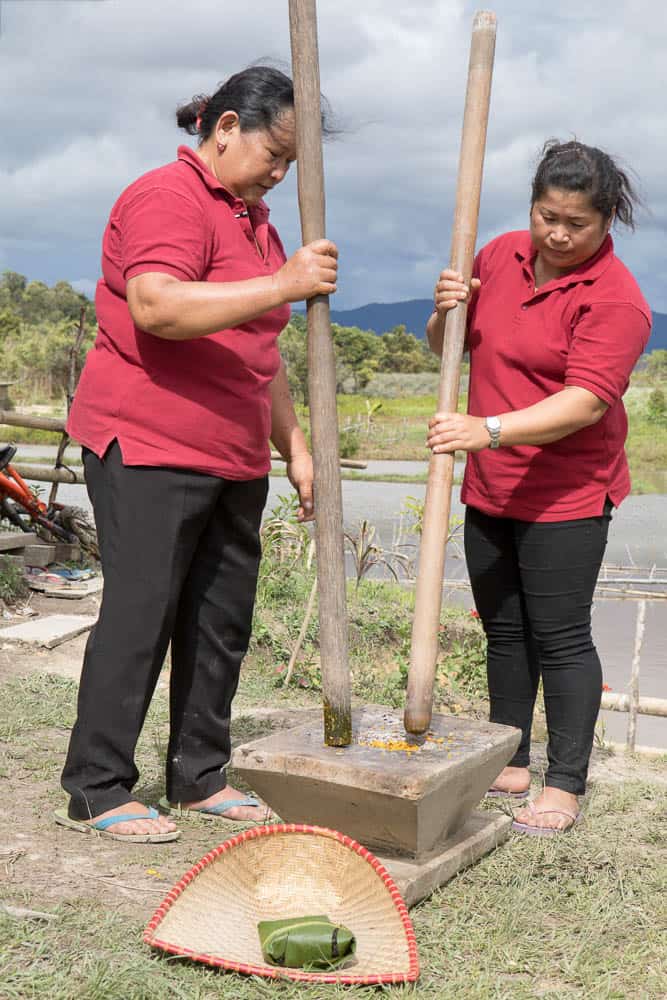 Pounding turmeric for a yellow colour. Ipang siaq leaves for pink-orange have already been pounded and are wrapped in banana leaves, 2017, photo: John Boyd Macdonald

The raung basung sunhat was traditionally worn by women when harvesting rice and during ceremonies. The sunhat formed a pair with the tayen, a harvesting and ceremonial basket. In Dayak culture, rice is closely associated with female fertility. As the repository for rice, the source of human life, the tayen is created and treated with great reverence. The spiritual association of rice with women means that traditionally women use the tayen for harvesting rice and it is the bride’s family that gives the tayen with the raung basung to the groom’s family. At the end of a day of harvest, the tayen and raung basung are stored in the rice barn, the raung basung closing the top of the tayen. In former times, they were an inseparable pair. 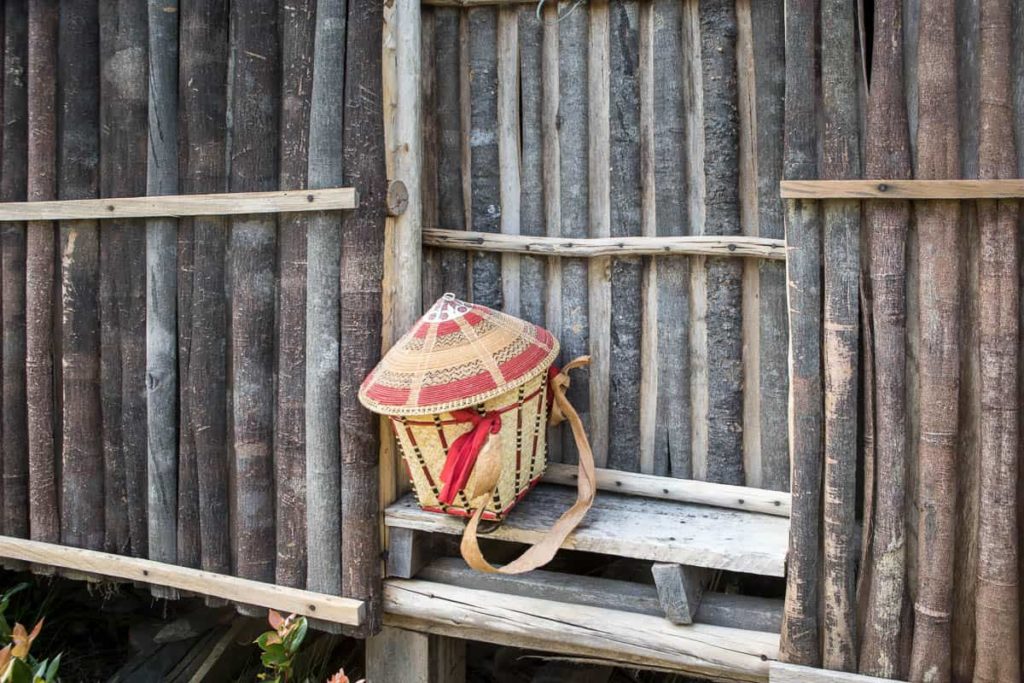 Maintaining their adat (customs and traditions) and their unique identity is fundamental for the Dayak Lundayeh. So is religion. Eighty five per cent are Christian Protestant or Evangelical—a fact duly recorded on their national identity card. Since 1974, it is the church service that makes a marriage lawful.

There is a distinct partitioning of the adat (customary) and church ceremonies. The adat ceremony, the ritual exchange of bridewealth, includes the tayen and raung basung. Since the mass religious conversion of the late 1920s, the adat ceremonies are no longer used in a spiritual sense but rather as signifiers of Lundayeh identity.

We knew we were fortunate to see an adat ceremony for the wedding of Dessi and Benny in the village of Terang Baru. A local man quietly disclosed that not every pastor permits adat ceremonies.

The early morning wedding ceremony began as the groom’s kin delivered their furut (dowry) to the bride’s family home. Thirty male relatives thronged around a “tree” with eight prong-like branches stripped of its leaves. The men were absorbed in the time honoured tradition of building a kayuh burung (wood pile). 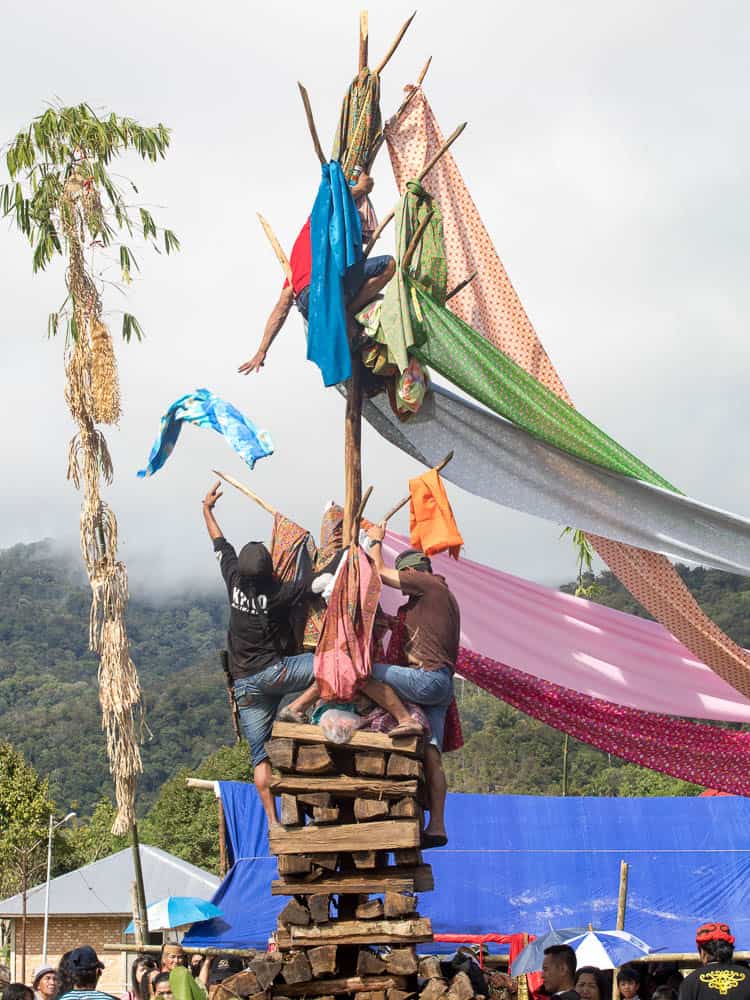 This kayuh burung was no ordinary wood pile. Split wood was layered to form a square around the tree. As this grew higher, smaller lengths of split wood were arranged to form a turret. Standing precariously on the top branches three nimble climbers unfurled fabric lengths by throwing them to other men waiting below. They, in turn, attached the ends of the fabric to the bride’s family house creating visual paths of textiles. This is ritually significant. As in other traditional religions in Kalimantan, swathes of textiles or leaves provide paths for the ancestors’ spirits. The locals resolutely informed us that the purpose now was purely decorative, that the concept of a “path” was a belief from former times.

A long-horned mature buffalo, the best money can buy, was presented by the groom to the bride. Adat nenginua was performed—the ceremonial dressing of the bride’s grandmother—as a gift to the matriarchal lineage for giving birth to the bride. 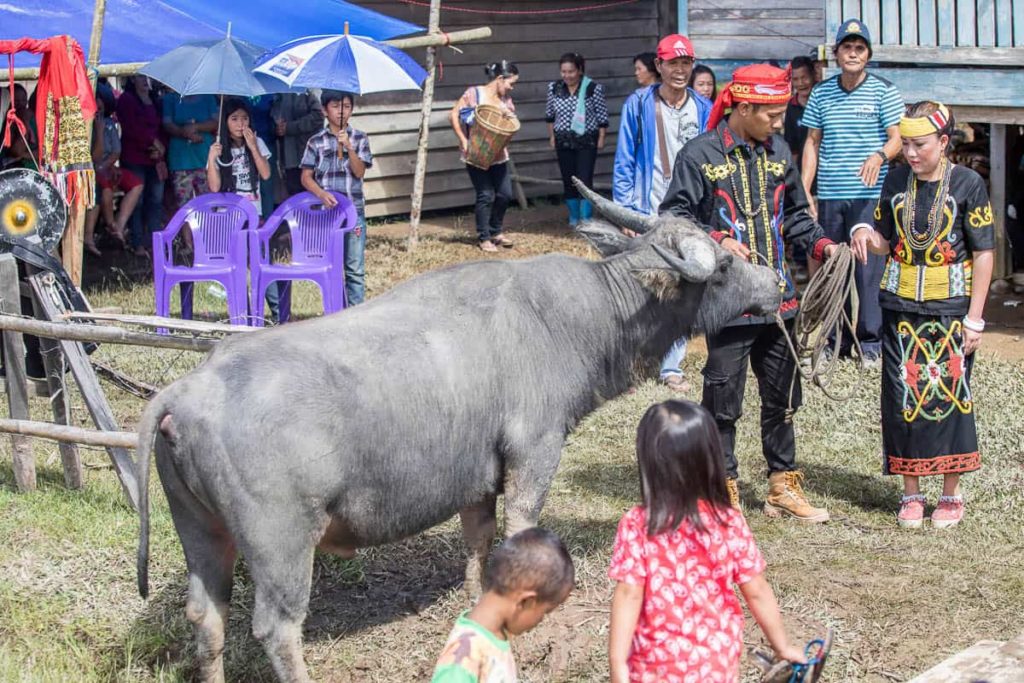 After church and a feast came the ceremonial welcoming of the bride’s family to the groom’s family home. To the sound of a gong and drum orchestra, a colourful procession of the bride’s kin rounded the corner. It was led by a man carrying an egg-shaped gourd on the end of a long bamboo pole and a tabeng and keng bamboo orchestra. 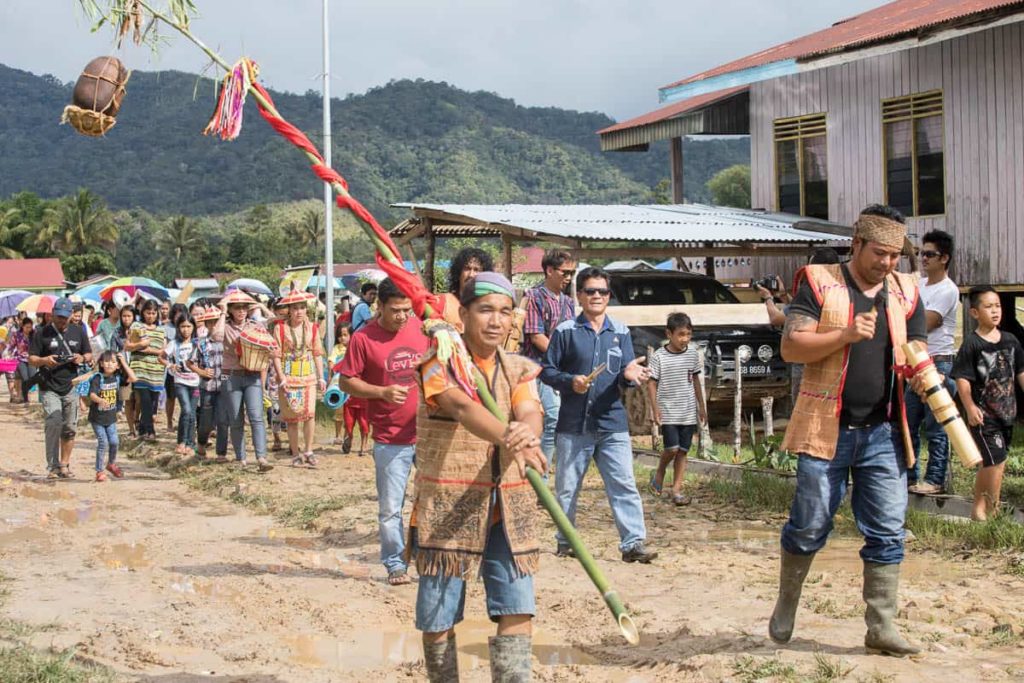 Procession of the bride and her family to the groom’s family home, Terang Baru, 2017, photo: John Boyd Macdonald

The bride wore a raung basung and carried a tayen, as did many of her family members. It was our first sighting of the inseparable pair in a ceremony. The raung basung were made using chemical dyes. The locals seem to prefer this “modern” variety of raung basung. But the tayen, said by some to be more important ceremonially, were in their traditional form, perfectly woven with five types of rattan, made distinctive with twelve struts coloured with black or red natural dyes.

People in this procession carried all manner of essential household goods: reing (harvest baskets), woven mats, rinuh (winnowing baskets), pots and pans and even a rice cooker. Everything a new couple could need to start a new life (except for the one hectare of land and the washing machine that could not be carried), was arranged in front of the newly married couple. These gifts symbolise the beginning of a new life together. 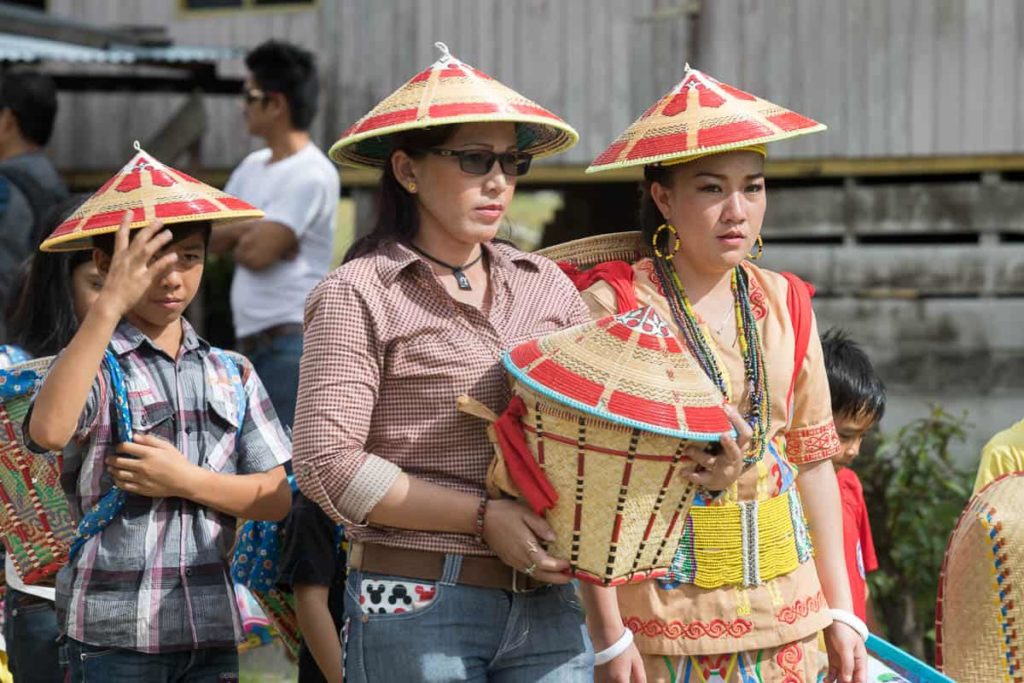 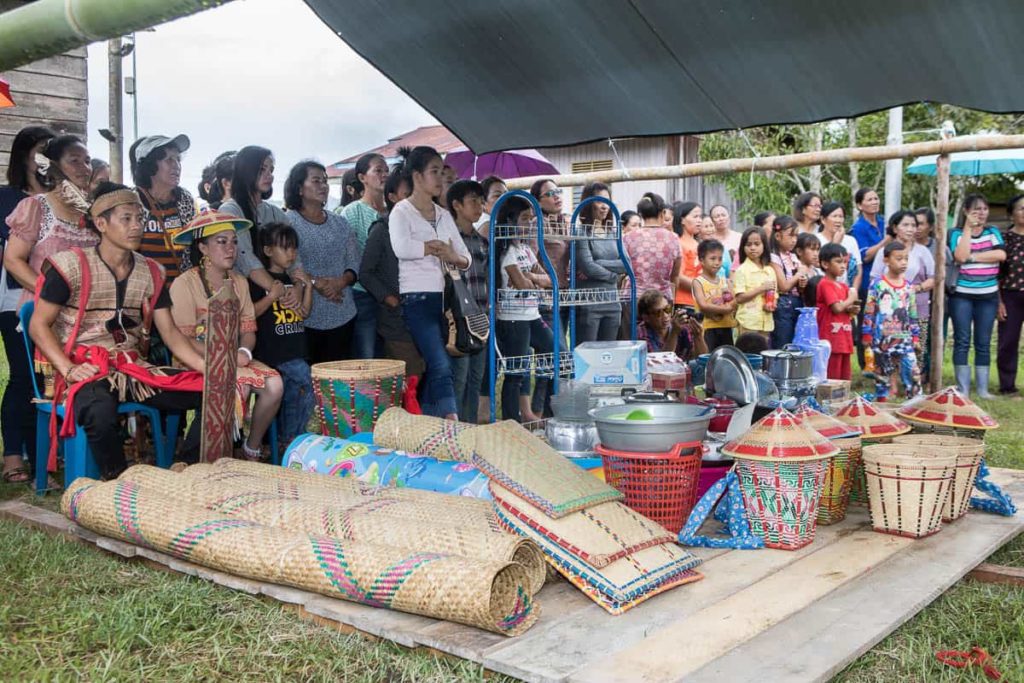 Tayen and reing baskets and raung basung (sunhats) take pride of place at the front of the gifts from the bride’s famil. At left woven mats and rinuh (winnowing baskets), 2017, photo: John Boyd Macdonald

The ceremony was over. The inseparable pair were separated. The baskets and sunhats of the customary religion have become essential items in present day wedding ceremonies. The community is Christian now and they don’t strictly follow customary practices, but they have adapted some aspects into their weddings, an important life cycle ceremony. Now the ceremonial exchange of gifts, including the tayen and raung basung, has a more practical purpose: the expression of a common cultural heritage and the bonding of two families.

A special thanks to Ellias Yesaya, Cultural Adviser, Dessi and Benny, the newly-weds and the people of Terang Baru.

The Craft Conservation Program of Yayasan Mahakam Lestari was established in 2008 as a direct response to the rapid disappearance of many Indonesian cultural treasures. The program focusses on the preservation of Dayak hand-plaited and naturally dyed artworks facing extinction to ensure that these vital components of Indonesia’s heritage are not lost to future generations. Raung basung, sa’ung seling and cahung kalung sunhats and the tayen basket are four of seven culturally significant Dayak handicrafts that we have helped to preserve. A decorative rinuh (winnowing basket) is one of our development handicrafts. 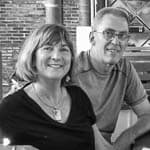 John Boyd Macdonald is an Australian photographer who has lived since 2014 in Central and East Kalimantan. His photography explores the people, cultures and nature of this unique and diverse region.

Karen Macdonald has an eclectic career in libraries, statistics and the arts in Sydney and Canberra. Her first stint living in Indonesia was working at Yayasan Bebali, a foundation associated with Threads of Life in Ubud, Bali where she developed her love of fine Indonesian craft. Since 2014 she has lived with her husband John in Central and East Kalimantan, Indonesia and worked at Museum Balanga and in the Dayak Craft Conservation Program at Yayasan Mahakam Lestari. 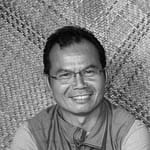 Paulus Kadok is a Dayak Benuaq from West Kutai, East Kalimantan who has devoted his career to the areas of economic empowerment, organisational development and capacity building in local Dayak communities. Since 2010 he has managed the Dayak Craft Conservation Program of Yayasan Mahakam Lestari.

Women's Wealth Project: Biruko and Tuhu hoods
Tying down art in my own public Idaho
The Afro-Peruvian cajón: Reclaiming a humble percussion crate as one’s own
Raci's mangrove apple: A batik message from the coast of Pasuruan to the fashion...
The fragrant tuberose: Collaborative eco-printing by batik artisans from Pasurua...
Craft revival in China: How to make an old year new again
Material culture in Arabia: Bedouin women and the art of sadu weaving
Making Retronesia: Modern Dutch architecture in Indonesia