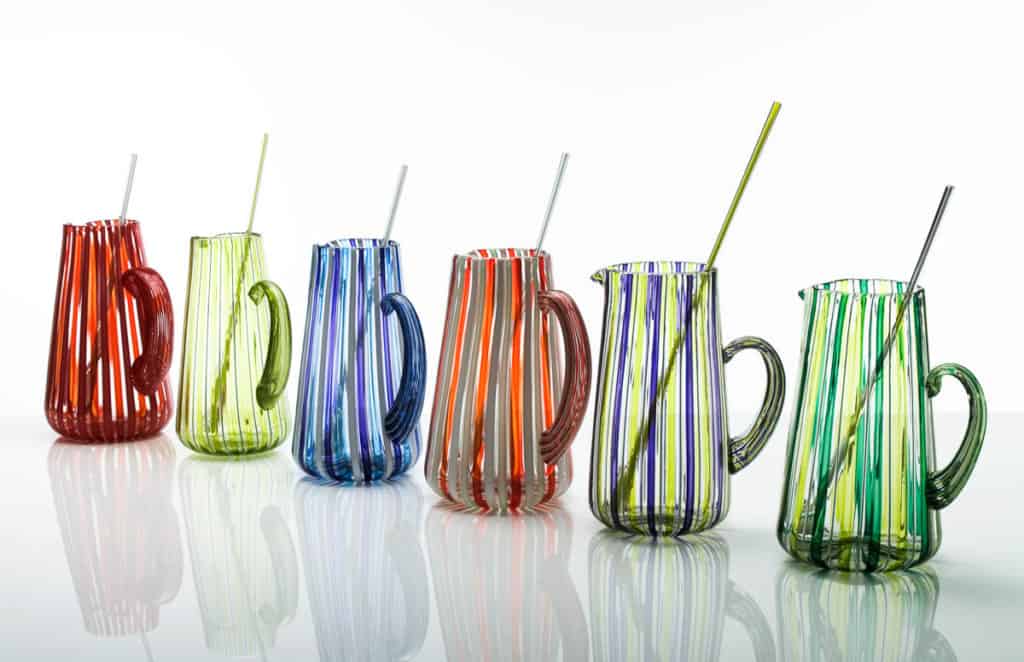 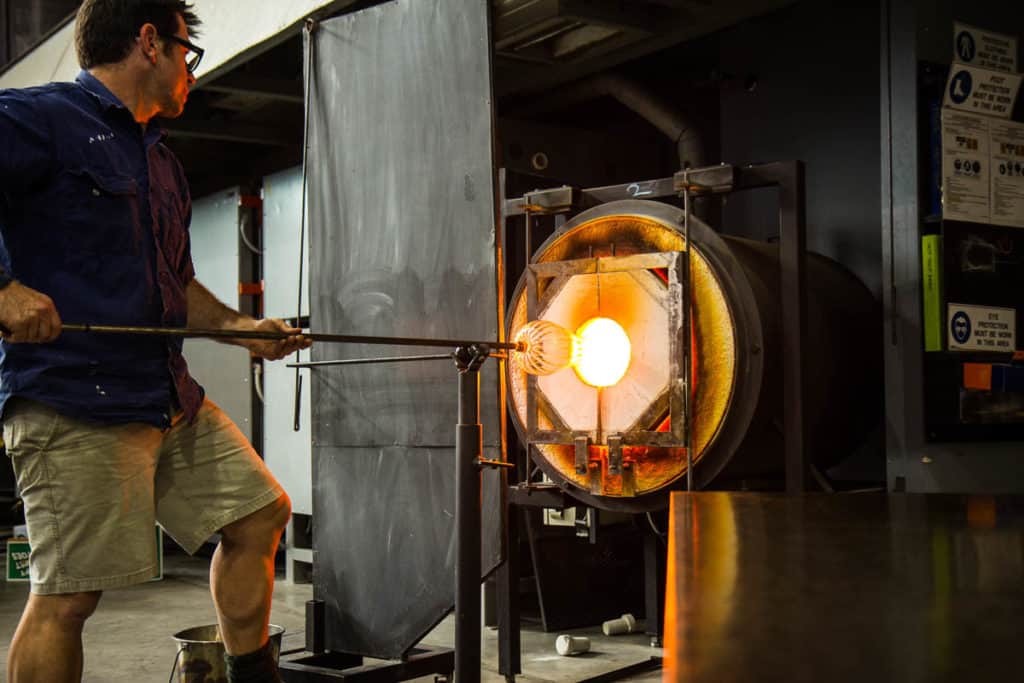 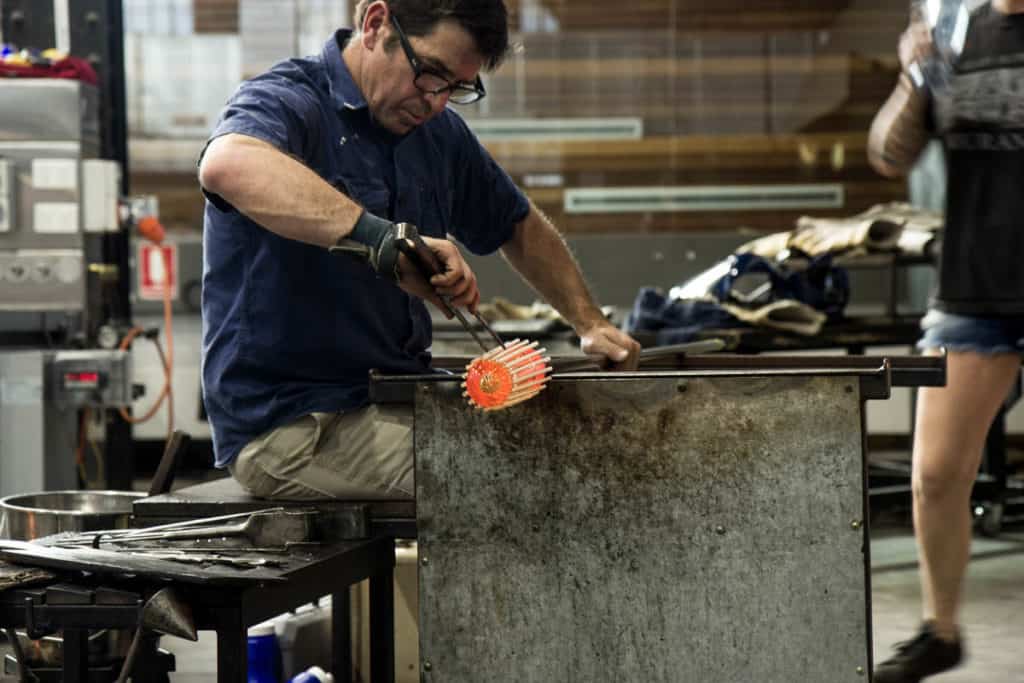 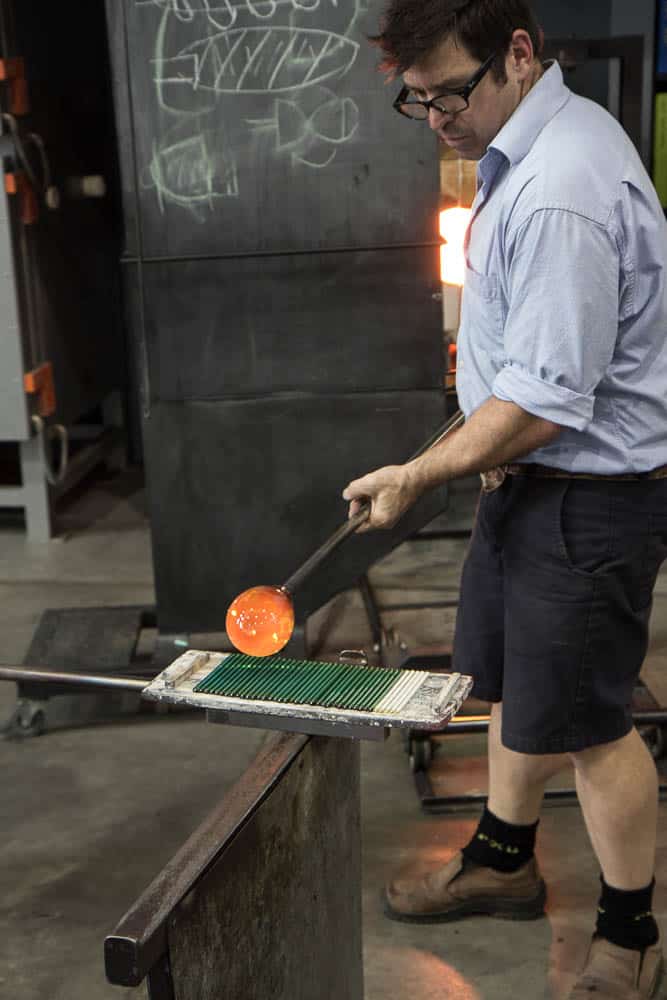 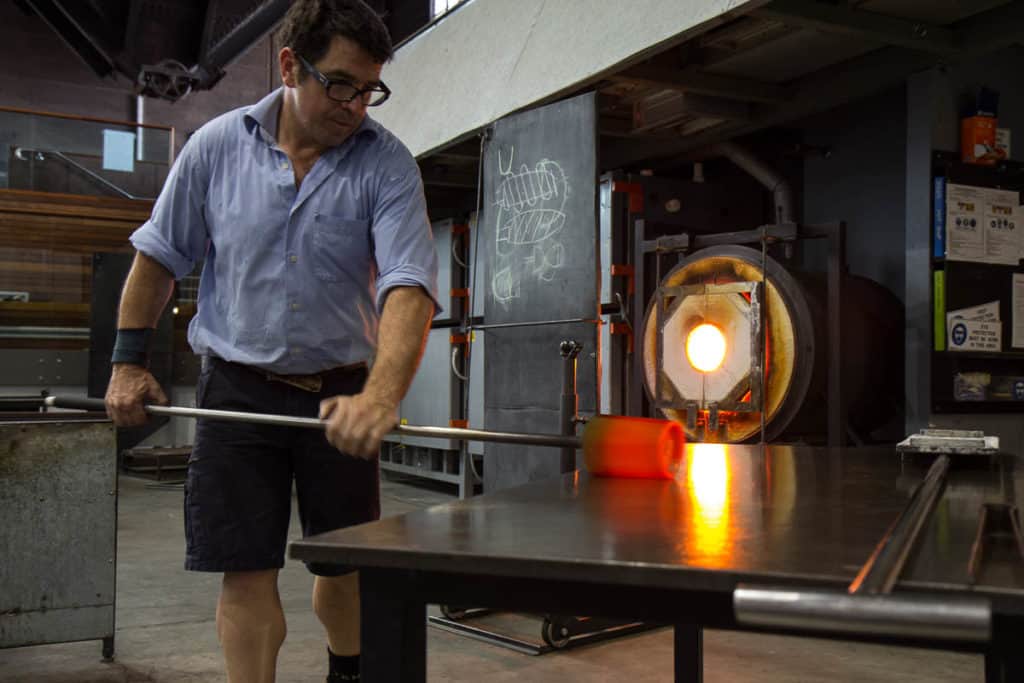 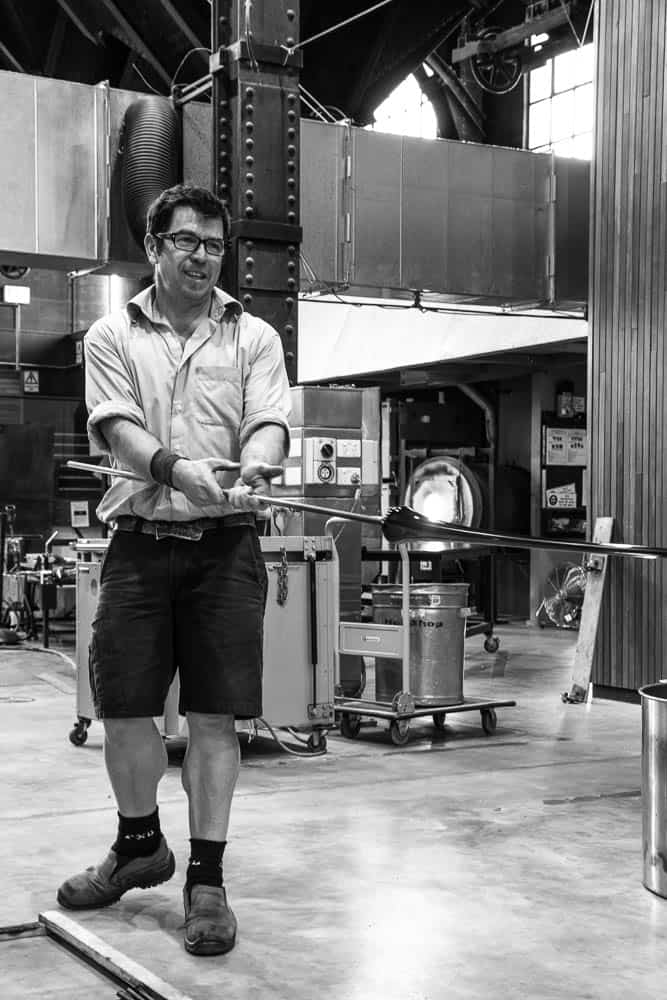 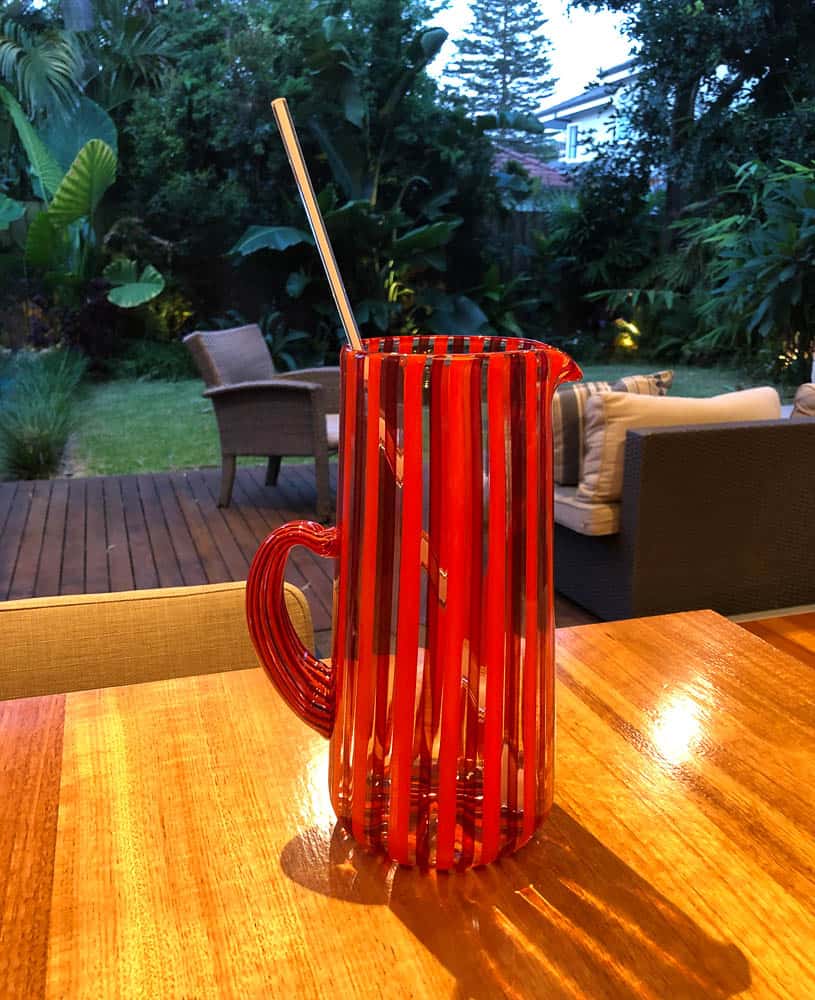 The Hayman jug is a craft classic that comes from the Sydney workshop of Ben Edols and Kathy Elliott. We glimpse the making behind the iconic wedding present and discover its greatest fan who inspired it.

The process of glass blowing, that making of something from nothing, the teamwork, the continuation of the history and traditions of glass making are so important to me.  I particularly love the process of cane making and have done since the very first time I tried it in art school days. The Hayman Jug is made with a central core of clear glass that is then formed up with around 40 coloured glass canes that have been pulled at an earlier stage. The canes are around 6m long at first, then cut down into 120mm lengths to use in the jugs. Each Hayman water jug is a single “pick up” off a steel plate, formed firstly into the body of the jug and secondly leaving enough material to shape up the handle with the same cane colours.

Just after finishing my degree in 1990, an Italian Master Lino Tagliapietra and two Americans, Dante Marioni and Dick Marquis held a week-long demo in Auckland. This was such a huge moment in my career, as I then went on to study under, work with and then become friends with all three of these men. Two pieces were made in that workshop that directly influence the Hayman jug almost 30 years later. Firstly Lino made a clear water jug as a 20-minute “filler” at the end of the day. He used an optic mould to make a twist and Dante brought him a hollow handle. Secondly, Dick Marquis made one of his signature Teapots. An import detail of the teapot is that both the spout and handle are made from the same patterned bubble. So the forming and fluidity of technique I can track back to Lino, the pattern making to Marquis.

I also want to mention that I helped a colleague Bettina Visentin make probably hundreds of water jugs over a number of years in the mid ’90s. I think that repetition is also helpful today.

We have been long-time admirers and collectors of Edols Elliott objects. Pieces we own include their signature “Leaf” and various other vessels.

In conversation with Ben one day, I mentioned that it would be helpful if he could make a vessel that was not only beautiful but practical. I gave the example of a water jug or a wine decanter (in red please to match my kitchen splashback!) And the Hayman jug was born!

I now own two Hayman jugs and they take pride of place on the dining table whenever we entertain. The slender glass stirrer—like an elongated water drop—is sublime in form and also practical. It’s perfect for mixing a jug of gin and tonic for hot summer evenings with friends!

I have bought at least ten Hayman jugs over the years in various colour combinations. They are the perfect wedding or “0″ birthday gift or for farewelling a colleague at work. I recently asked Ben to make yellow striped jug for a friend who was getting married as that was her favourite colour. She was so thrilled to own a piece by such esteemed artists and it takes pride of place on her new dining table. The jug in yellow is just an object of joy! 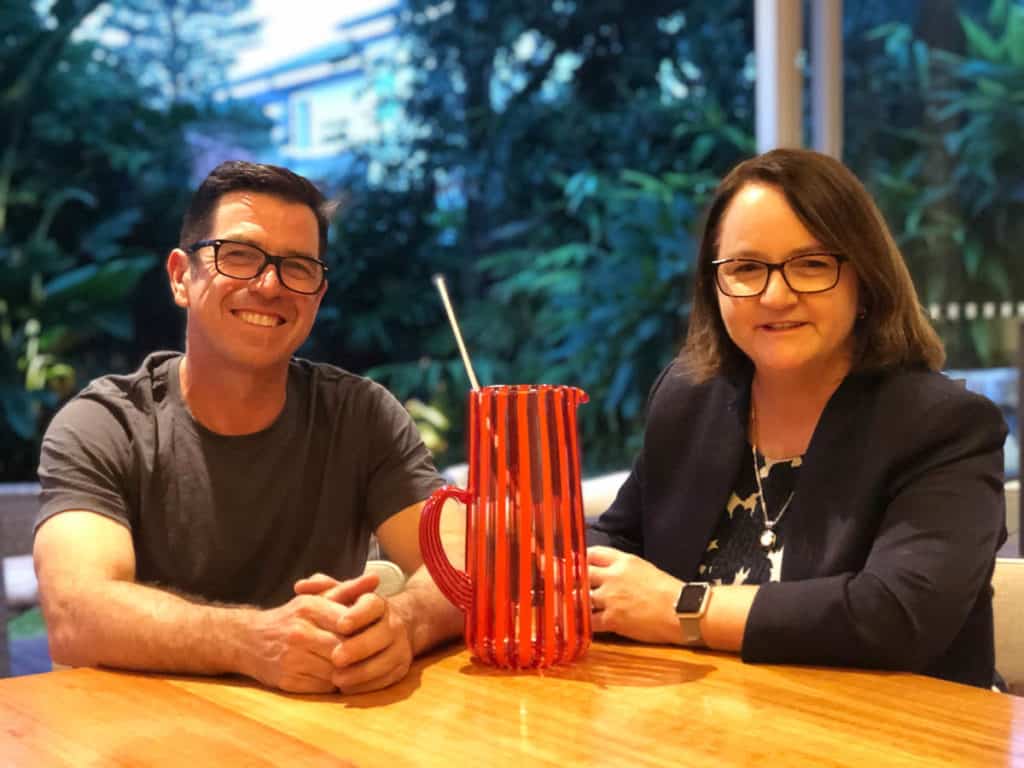 The power of transformative repair
Uzbekistan and the promise of apple trees
A glass bridge across the Pacific
How I learned coppersmithing in Gaziantep
Aesthetics in a time of emergency
Pesh boro: Epic weaving from Afghanistan
Offerings for absent friends: An interview with Ro Cook
What in flame-ation!