Heritage Chic: The duality of tradition and innovation in the Kanjivaram silk sari of Tamilnadu, India 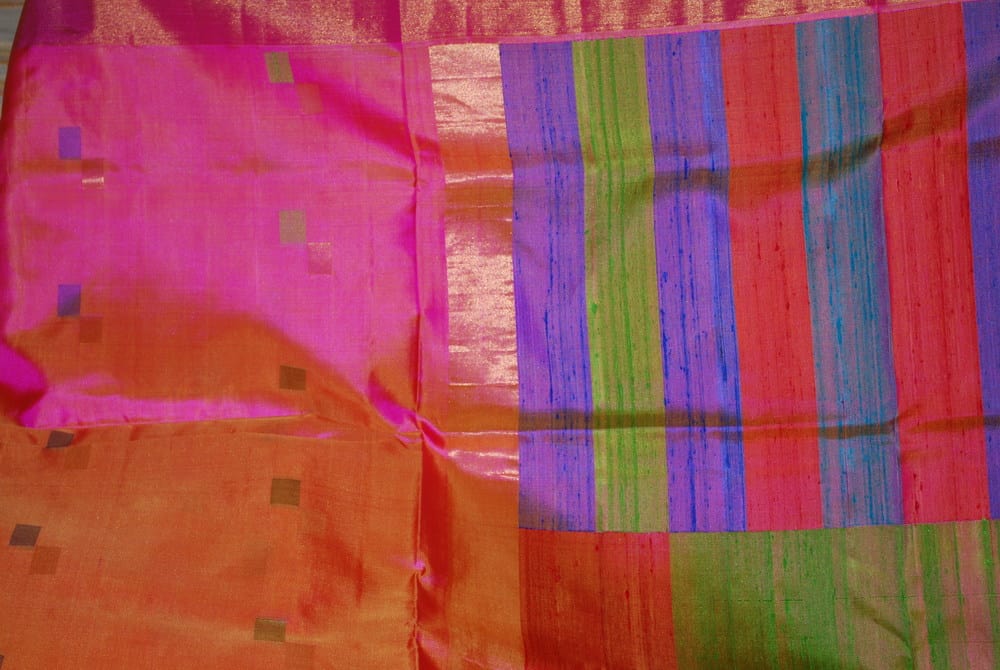 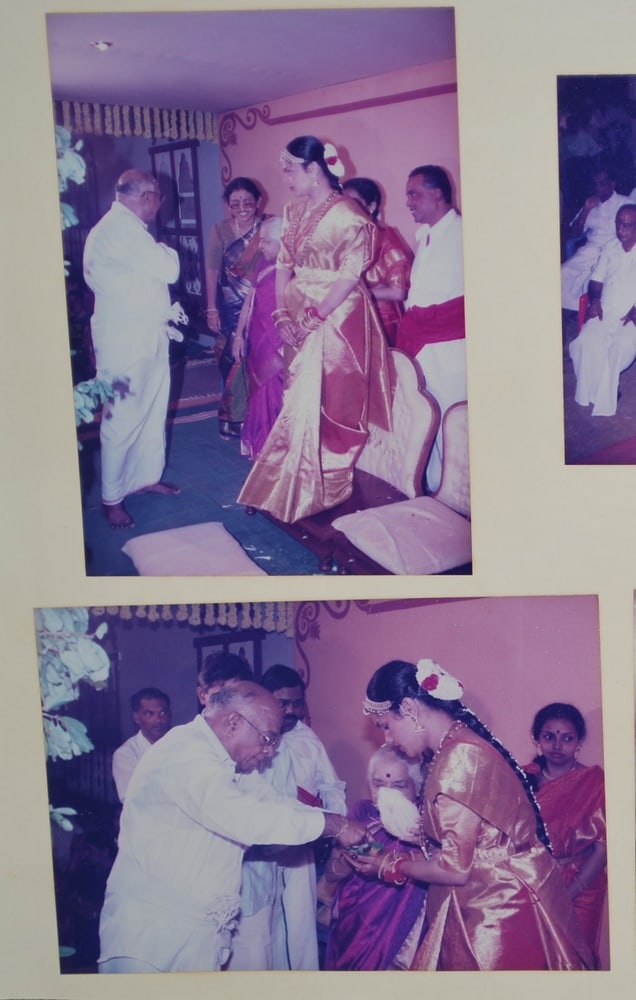 Photos from the wedding album of the Chennai resident, wearing her red bridal sari that was a reproduction of her grandmother’s sari design.

The title has been inspired by the term ‘ethnic chic’ that was coined by Emma Tarlo to refer to her study of the rural and tribal designs in Indian fashion.  I have concocted the terminology of ‘heritage chic’ to explain the heritage element in the design repertoire prevalent in the Kanjivaram silk, an indigenous textile originating in and around the town of Kanjivaram in the southeastern state of the Indian sub-continent.

The Kanjivaram silk sari has been given a privileged position by retailers in Tamilnadu in contemporary practices of heritage consumption. They incorporate the heritage formula through a number of visual ensembles including the design aesthetics.  While some highlight their place in the marketplace through the reproduction of traditional designs, others authorize themselves as the house of contemporary Kanjivaram saris that have an innovative take on the production of these saris, where non-traditional designs are introduced into the traditional fabric.

The traditional designs in the Kanjivaram saris include motifs depict the local flora, fauna, temple architecture and ritual objects such as jasmine, peacock, temple tower, sprinklers of scented water and so on. The resuscitation of ancient designs seems to be a common interest among the retailers and consumers alike.  On the one hand, the design team of a renowned Chennai based retailer has constantly indulged in the revival of vanishing designs during the reproduction of traditional Kanjivaram saris.  On the other hand, there are customers who take their grandmothers’ saris to the local retailers to recreate the same designs in a new sari as a way of reconnecting with their nostalgic memories.  Thus the designs in the Kanjivaram silk sari reverberate with enthusiasm for tradition, be it in the perpetuation of traditional patterns or in the resurrection of obsolete motifs.  As noted by a Christopher Breward and Caroline Evans in relation to dress and its temporalities, “The unstoppable trajectory forwards results in nostalgia… and modernity repeatedly clothes itself in reconstructions of the past” (2005: 10) .  Therefore today’s interest in the past traditions and its reinterpretations in the contemporary context should not be perceived as incongruous with the present modernity, but kindled by it.

Alongside these designs, innovative non-traditional designs have also entered the markets as an effort to appeal to other segments of potential customers.  A few years ago, a Kanjivaram silk skirt comprising the motifs of Western fairytales such as Cinderella and Snow White created a raging demand among consumers. While created primarily to cater to the children of the Indian diaspora as noted by a salesman, the local residents were equally enamoured. 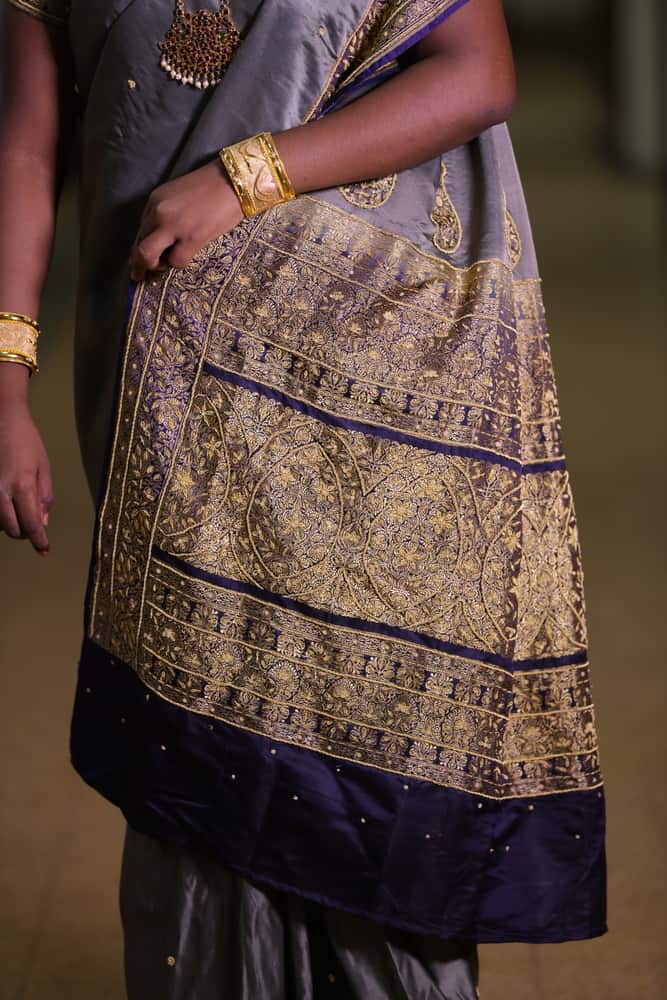 Another retailer describes the ‘bling is in’ phenomenon that he finds growing among shoppers today. This he attributes to the influx of communities migrating from northern India to Tamilnadu, who apparently favour the ‘bright bling’ as opposed to the traditional Kanjivaram silk’s ‘muted and restrained’ surface ornamentation. This led to a new line of Kanjivaram saris wherein traditional designs were embellished with kundan work (gemstones underlined with metallic foils) and zardosi embroidery (golden metallic embroidery) that were typical of Moghul India.

Another innovation in the Kanjivaram silk sari was the introduction of geometric patterns in lieu of the traditional flora and fauna designs. The woman proprietor of a store said that a market survey showed that the youth ‘found the repetition of the same old designs very boring’. Therefore, in order to make the Kanjivaram silk sari more fashionable for the contemporary young Tamil women, came the geometric designs.

In its categorization as heritage by retailers, consumers and heritage organizations alike, the Kanjivaram silk sari should not be mistaken as an object fixed in the past, but rather a product of present modernity.  The current Tamil ethos has paved way for the traditional and innovative designs of the Kanjivaram silk to co-exist in the mediated form of heritage.  The design gamut of the Kanjivaram silk sari portrays that this textile is not a static continuation of tradition. It is rather dynamic as seen in the various adaptations and the resultant hybridity. Therefore this unstitched fabric should be viewed not in terms of the strict dichotomy of tradition and modernity, but rather as a duality of tradition and innovation comprising the flows of the old and new. 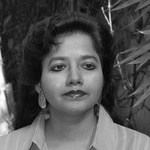 Dr. Kala Shreen is a socio-cultural anthropologist and ethnographic filmmaker.  She is the Chairperson of the Centre for Creativity, Heritage and Development in Chennai, India. Her key areas of research are Indian material culture and visual arts such as material Hinduism, traditional artefacts, indigenous crafts, textiles and fashion.  On these topics, she has delivered lectures, presented papers and screened her films in several international universities including Harvard University, University of Cambridge and University of Oxford.  She has authored a chapter “Dress and Textiles in Transition: The Sungudi Sari Revival of Tamilnadu, India” in the edited volume Dress History: New Directions in Theory and Practice, London: Bloomsbury Academic. Along with Prof Maruska Svasek, she is also the Director of Cultural Dynamics and Emotions Network (CDEN) at Queen’s University Belfast, U.K.

Sundar Sari: A reverie of past loves
Layerscapes: Colonial history on a thread
Islam on Australian shores
The rare art of Mumbai's Parsis
Material culture in Arabia: Bedouin women and the art of sadu weaving
Yilaalu - objects for carrying stories
For the love of Lao - Studio Naenna
The Bolga basket: Ahmedabad comes to Accra