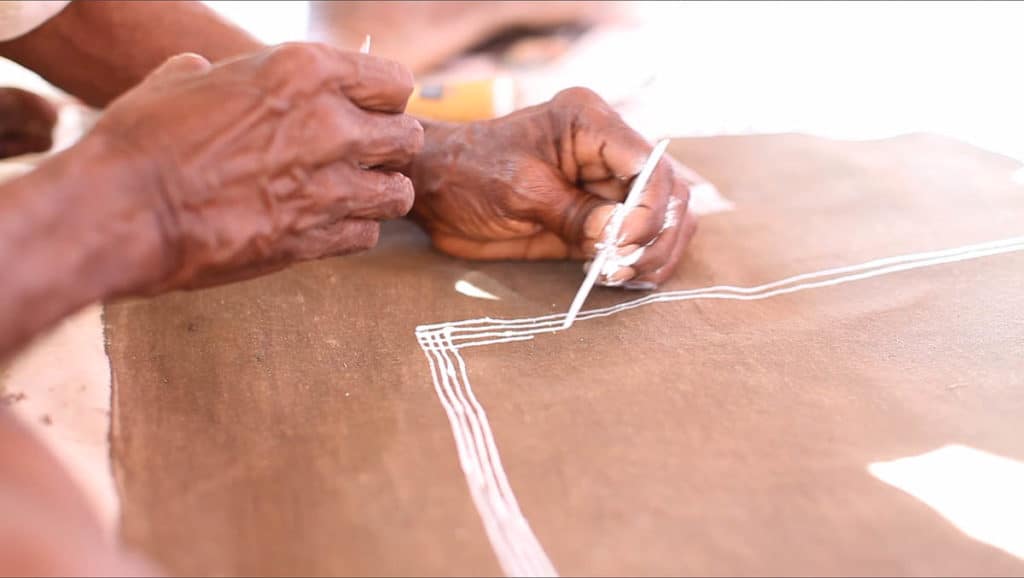 Felt by the rhythm of leaves, through the rising kite and the floating clouds, although not visible, yet its profoundness is such as that we are alive. Just as air is essential for life, so is the presence of rice in the world of Warli. The white of the rice holds colours that are not visible to the eye. Traditionally, rice told the many stories of rice.

Times are changing. Although the white has still retained, poster colour has taken the place of the rice paste. Jivya was an exception who instead of a brush continued the use of a bamboo stick to pen the folk tales. With him as a pioneer, some five decades ago the folk art of Warli travelled from the brown mud wall of the house to the canvas. The lepan makes this travel more intimate. The same mud and cow dung used for lepan of the house walls is applied to canvas. With a change of the season, the mud from the soil shades to different browns. It is darker in the monsoon: a red tone with the addition of red brick dust and layers of cow dung for a deep dark brown.

My affair with the Warli world started with assisting filmmaker Johnny Magee, through A Fine Line. 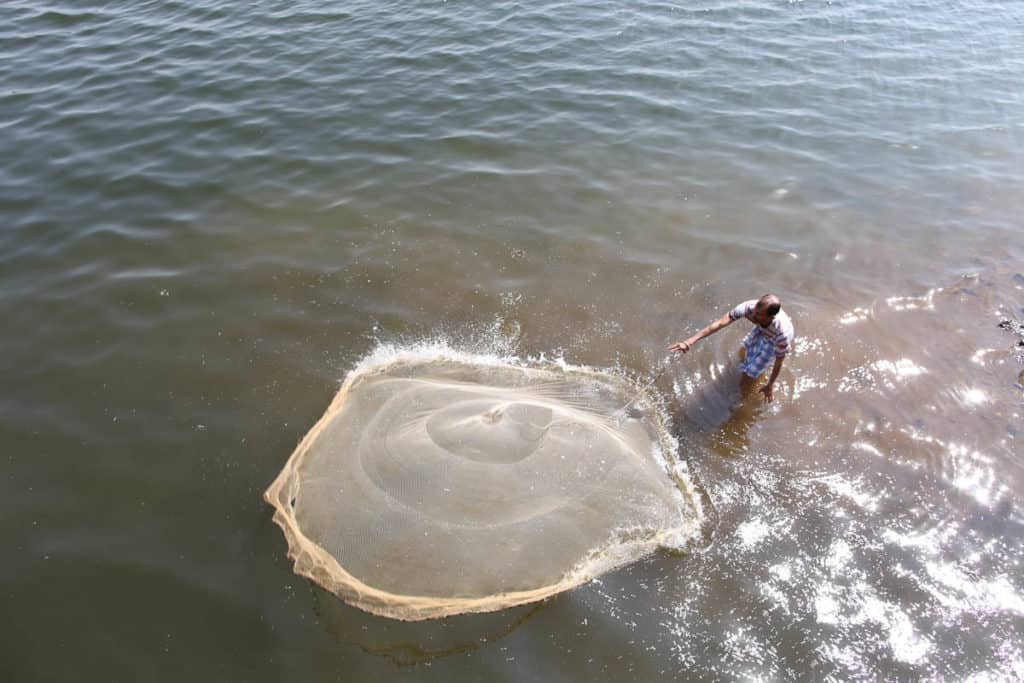 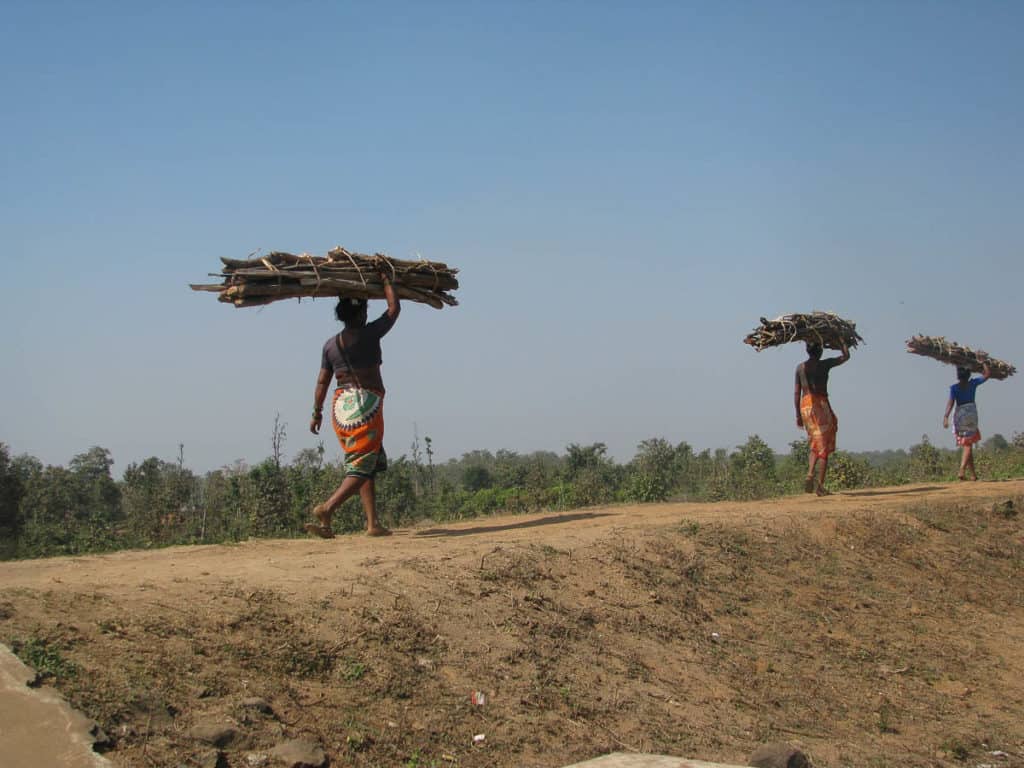 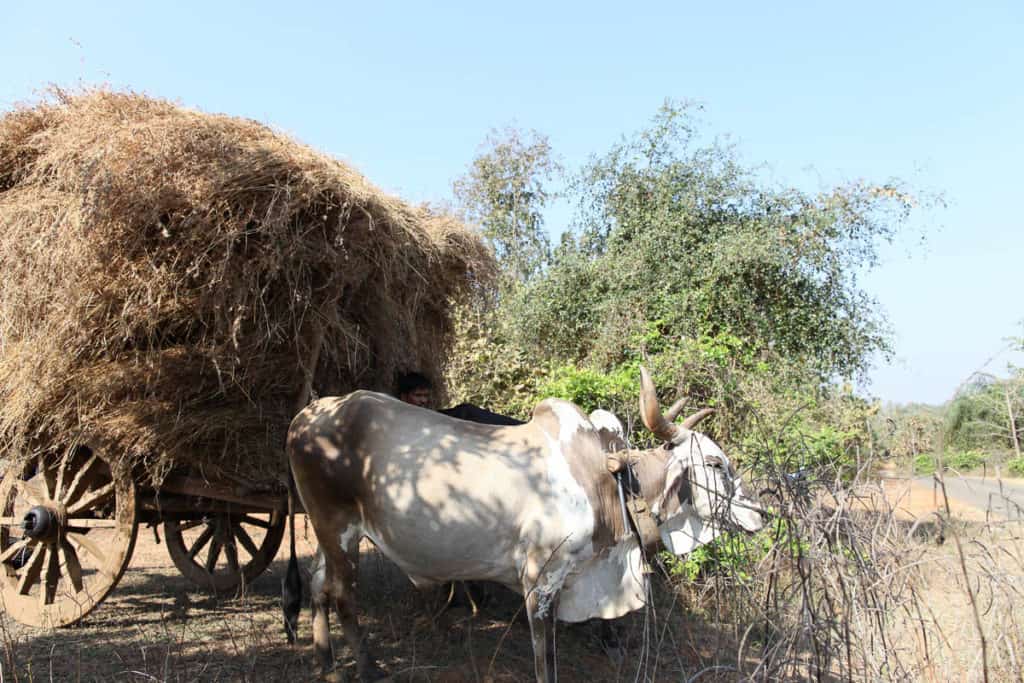 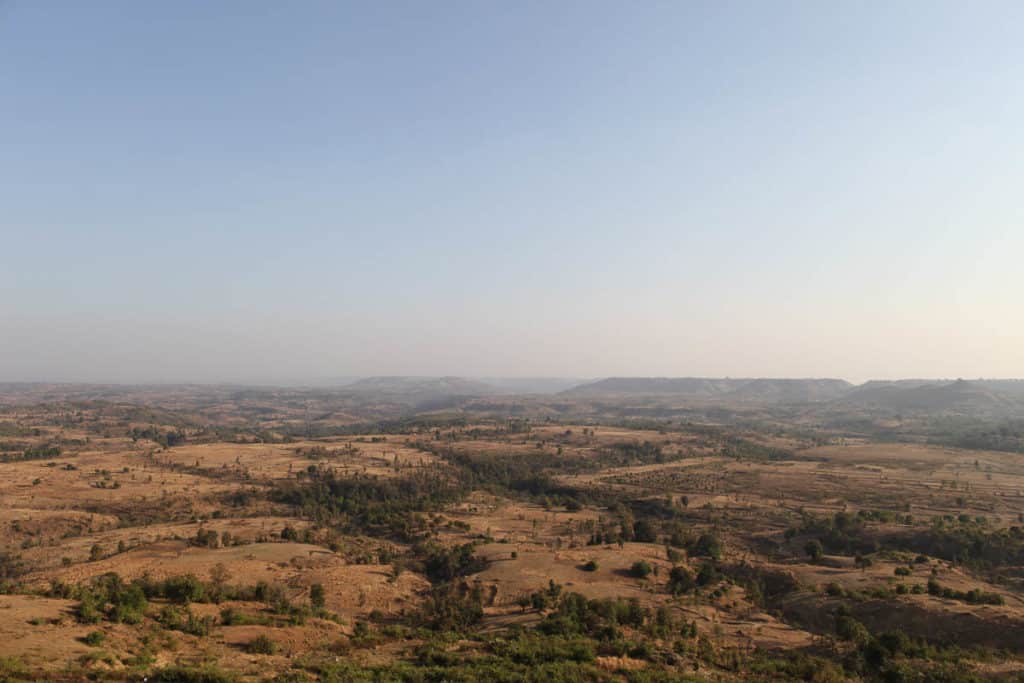 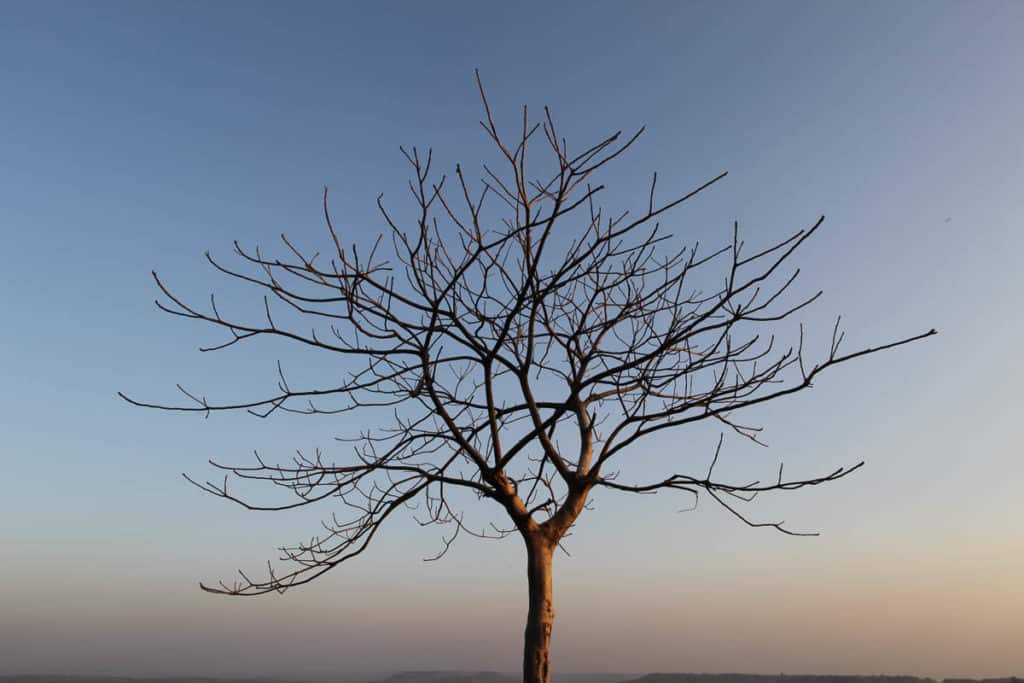 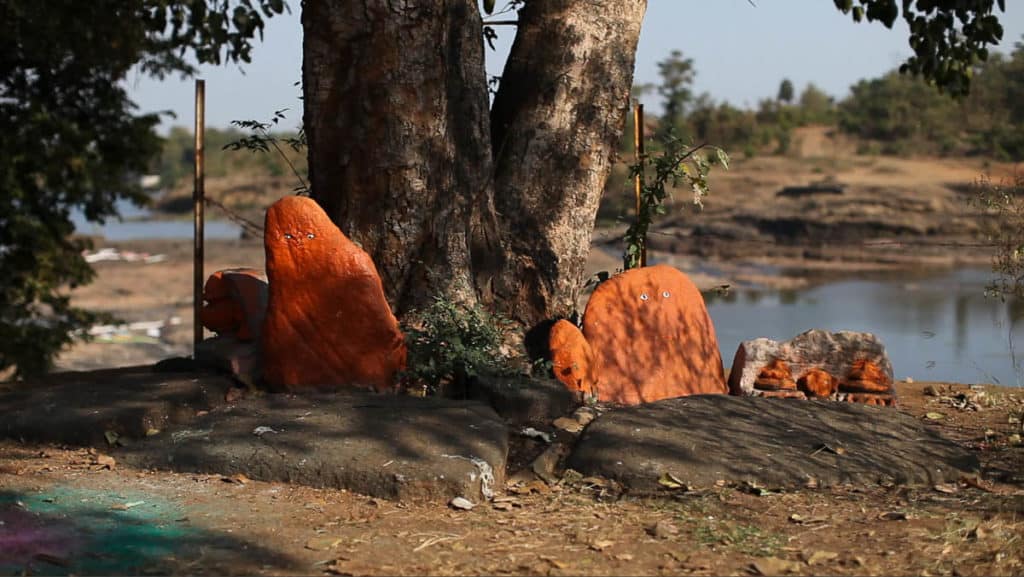 In that heat when the mud yields lightest brown, I first met Ramesh, Sadashiv, Balu and Jaiva. Along came the Warli culture and its stories in the canvas of my own life. I assisted Magee, the English director who had known Warli paintings through Ramesh in Nottinghamshire. Ramesh had visited the canvas of England as an artist in residence. As the English imagination captured his mind, new vegetation grew on his Warli canvas. Robin-hood too walked in along a new landscape, making a debut in the world of Warli paintings.

To Magee, Warli painting style echoed his own style of film making. Johnny spoke of Lowry, the Manchester artist whose canvas filled with human figures in open spaces. Although white, the figures in Lowry’s canvas have a dark mood, a reminder of the bygone industrial era of Coal and Mill Cloth. In contrast, the figures in the canvas of the Warli world are all white, sometimes dancing in circles, at times walking through a jungle or farming rice. There is a significance in the direction of feet in the movement. It may have all begun with the union of two souls when the script would not have evolved and the rice did the sacred work. Even today folk songs of the Gods are sung and the lyrics contain directions to detail the narrative of the chowk, inviting the Gods to the wedding. Traditionally, this sacred expression that has been practised as a ritual art at the time of weddings. As a child, Jivya accompanied the elderly women to ceremonies, assisting the drawings. Giving his own expression to folk tales of the Warli tribe, based on the style of the ritual paintings, he began the legacy of what is seen as Warli art today. 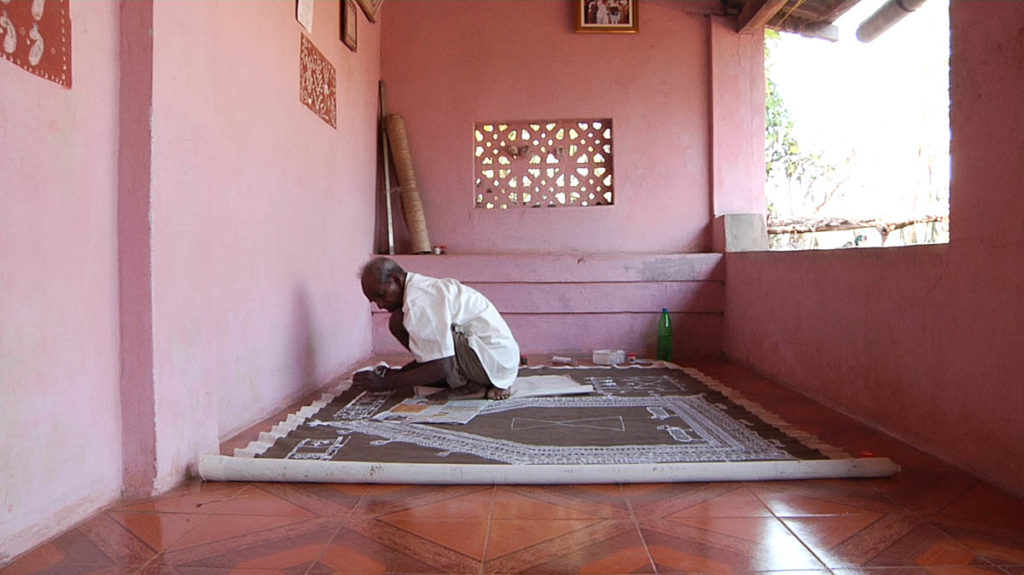 Despite being bestowed with one of India’s highest civilian awards and his canvases sorted after internationally, Jivya remained one of the most humble artists. He continued painting until his last days. In my last visit I came across him sitting athletically upon the earthen canvas, intensely painting the rings of the net, repeating the act, he continued as if he was born to pain yet another of his “Fishing Net’’ paintings. He brought a new dimension to perhaps the oldest tribal art form known to mankind. His gentle nature and repetitive painted strokes seem to find an echo in the work of Balu Mashe, Jivya’s younger son’s persona. Sadashiv, the elder son and Jivya’s first student. Balu Dhumada’s canvas on the other hand usually has a playful political angle on village life. Sometimes local politics and critique on the society are subjects of the canvas, an aspect that could have been borrowed from the moral value of traditional Warli folk tales.

There are endless folk tales. A story could start in one direction and go in a completely unexpected direction. Gods may be seen playing marbles that in turn creates the rain, Gods may have a group discussion about the creation of rains—rains that would bring rice. Rice! When rice is not sown and harvested, it is celebrated on the canvas and the kitchen. Almost all Warli painters identify themselves first as farmers: paintings to them are a secondary seasonal engagement. Various stories and their various variations occupy the canvas. Every artist paints the same story differently or the same artist paints a particular story over and over again, like a favourite dish prepared and served with the same dedication. Between all these, new dishes too find their space and smell delicious. The steam of the engine painted on the canvas felt like a playful rush in the foreground of the wedding chowk, next to it grows a tree in Jivya’s classic folk style. A tree is also growing in Anita’s new canvas; Jivya’s is depicted as the root, many artists branching out with fruits of new brown, new white.

The tree in Jivya’s canvas that is reimagined by his granddaughter Anita is mystic. This tall tree seems to emerge from another of Warli folk story. It is painted next to the very wedding chowk painted on the house wall that is depicted in Jivya’s canvas. Something is unusual about this tree. What is it, I wonder? There were no leaves. There are only monkeys, perhaps ten, twenty or thirty. It seems the monkeys have always been a part of the tree, Their spiral tails in a balancing act facing each other. It is as if the Warli world and the rest of the world were facing each other.

There is a story waiting to be told of the spiritual connections between earth and humans, the formation of the world, animals, celebration, witchcraft, deforestation, rice and monkeys too.

To Barney Hare Duke and Late Jeremy Theophilus of A Fine Line for their guidance and dedicated efforts for making this across culture Warli dialogue possible.

A gift of song: The melody of making Kediyun
Kumbharwada: Make in Dharavi
In search of the keys: The chola regional over-garment, from the mountains of Hi...
Primal Casting: From the outdoor studio
उपहार - Uphaar
Sindhu - The river line: A dialogue
New homes for old stories
Safed: The beauty of simplicity