In Issue #3, we featured Clare Kennedy as a case study for the Apprenticeship exhibition at Artisan Gallery. She wrote about going to India to study the changing brick industry—”It is a story worth telling”. She shares with us now the remarkable discoveries of that trip. 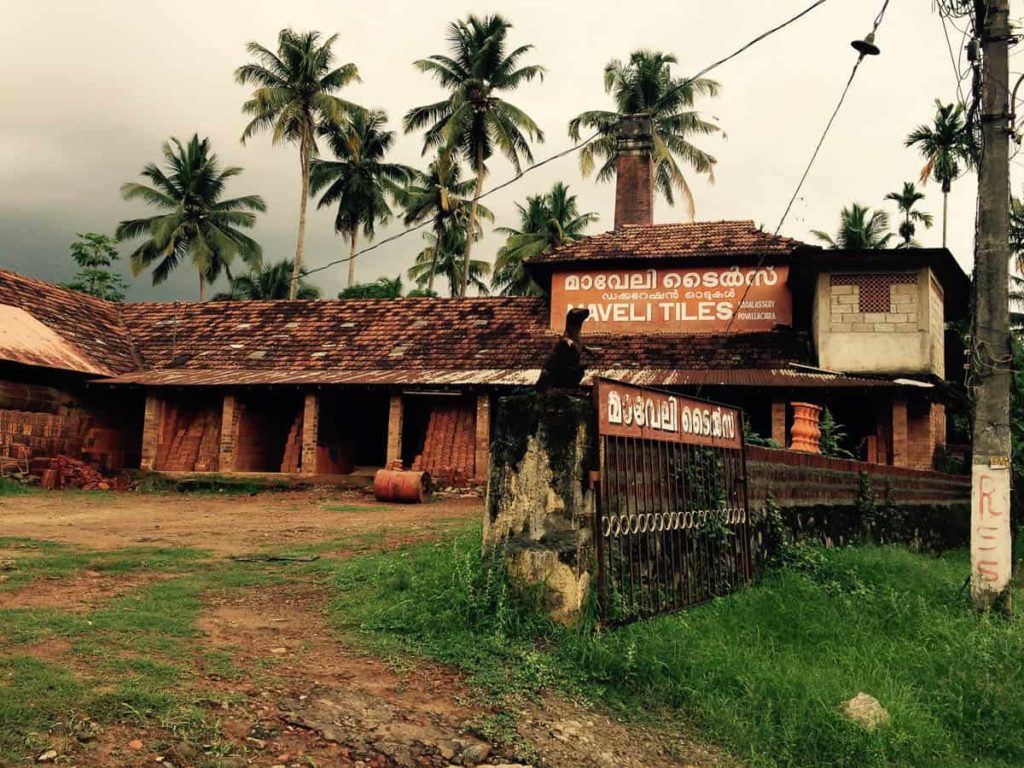 Of the 430 brick factories open in Kerala 20 years ago, 253 were in the area surrounding Thrissur. Changes in conditions have caused the closure of the majority of these however their remnants still remain scattered around the landscape. These factories remnants are beautiful homages to brick and tile. Long brick fences made of damaged roofing tiles surround dusty red yards where soil mounds sit beneath coconut trees. Brick chimneys rise robustly from the centre of low lying sheds signaling a factory beneath the overgrowth. 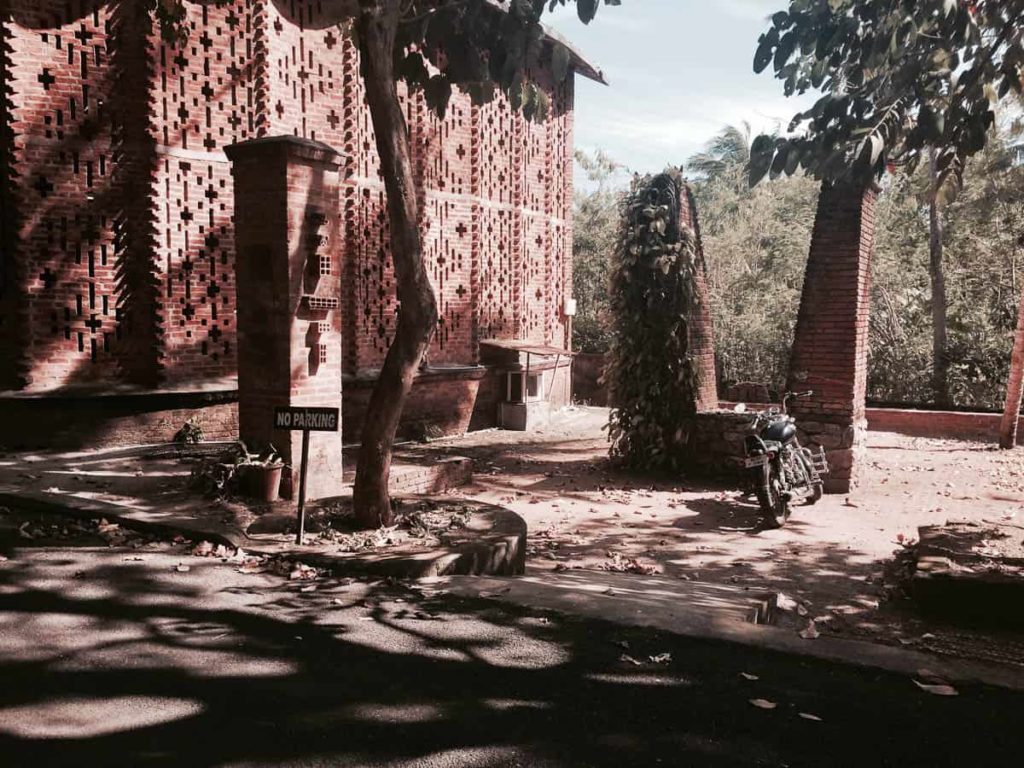 Laurie Baker, an architect from Birmingham England, was on his way home from serving in the war when he met Mahatma Gandhi in Mumbai. Gandhi appealed to Laurie to remain in India and use his skills as a designer to assist in establishing good forms of low cost housing. Over the next 50 years Laurie housed thousands using the humble brick. He developed innovative ways of using this simple and readily-available building form to provide walls, ventilation, windows, structure, security and ornament. 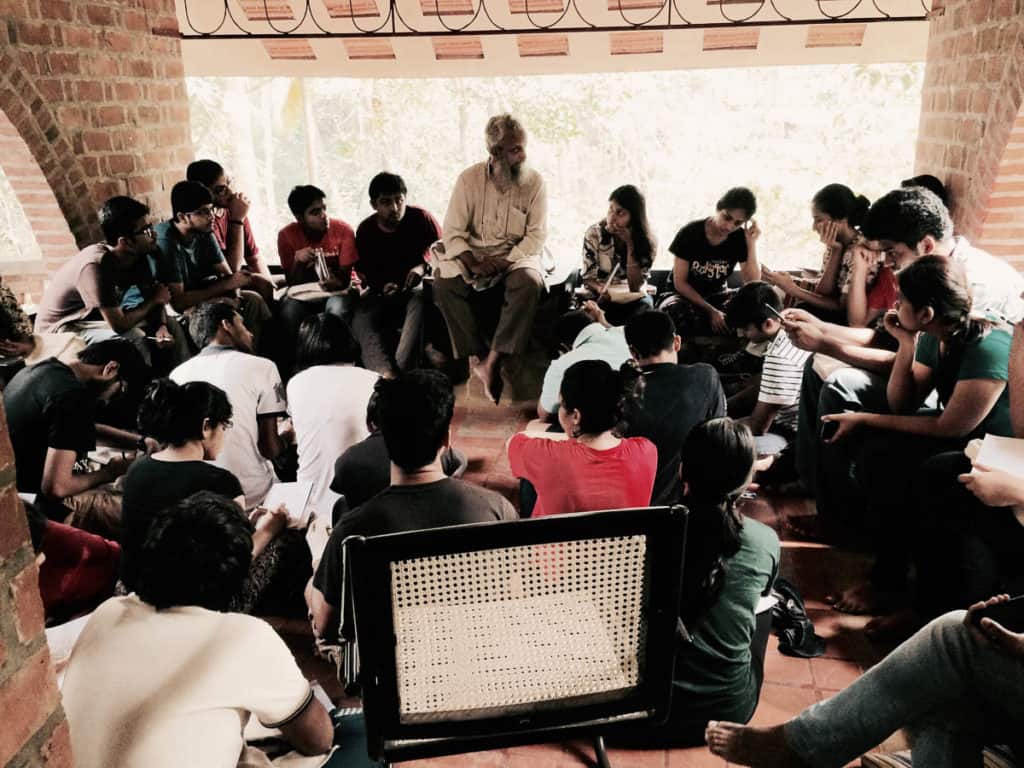 In line with Laurie Baker’s vision this centre now teaches thousands of students his low cost, aesthetically pleasing and environmentally sound principles. Indian and international students are invited to spend a few days on campus where lectures are interspersed with hands-on tutorials, arming visitors with the tools they need to spread Laurie’s methods throughout the wider community. The campus, designed by Laurie, is comprised of a series of highly considered buildings set amongst lush Kerala greenery, and the touching enthusiasm of the centre’s staff is a testament to Laurie’s infectious dedication the cause. 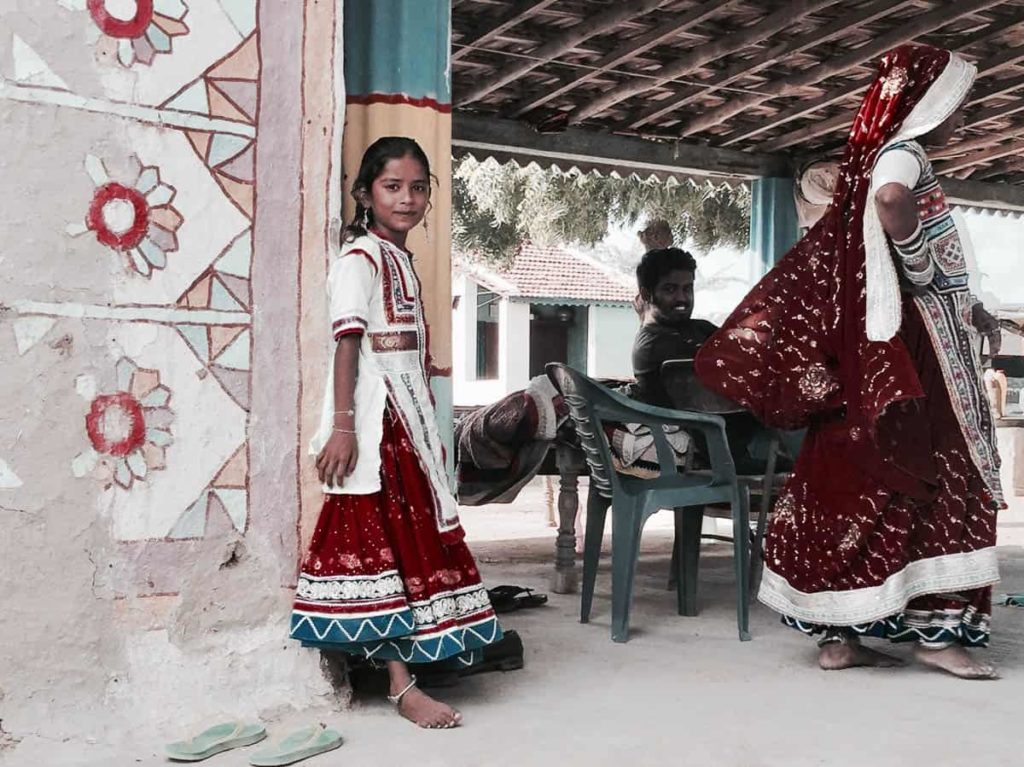 Rural villages across India use mud as their primary building block. Recipes for plasters, floors and walls change as you cross the country and resources alter, however mud is a common denominator. Here in the earthquake prone zone of Kutch, Gandhi Nu Gam village houses are circular, the shape providing rigidity against shaking. The thick mud walls also protect against extremes of climate with the temperature dropping appreciably as you enter. Villages use coloured clays to paint and decorate their walls with the patterns that symbolise their local area. 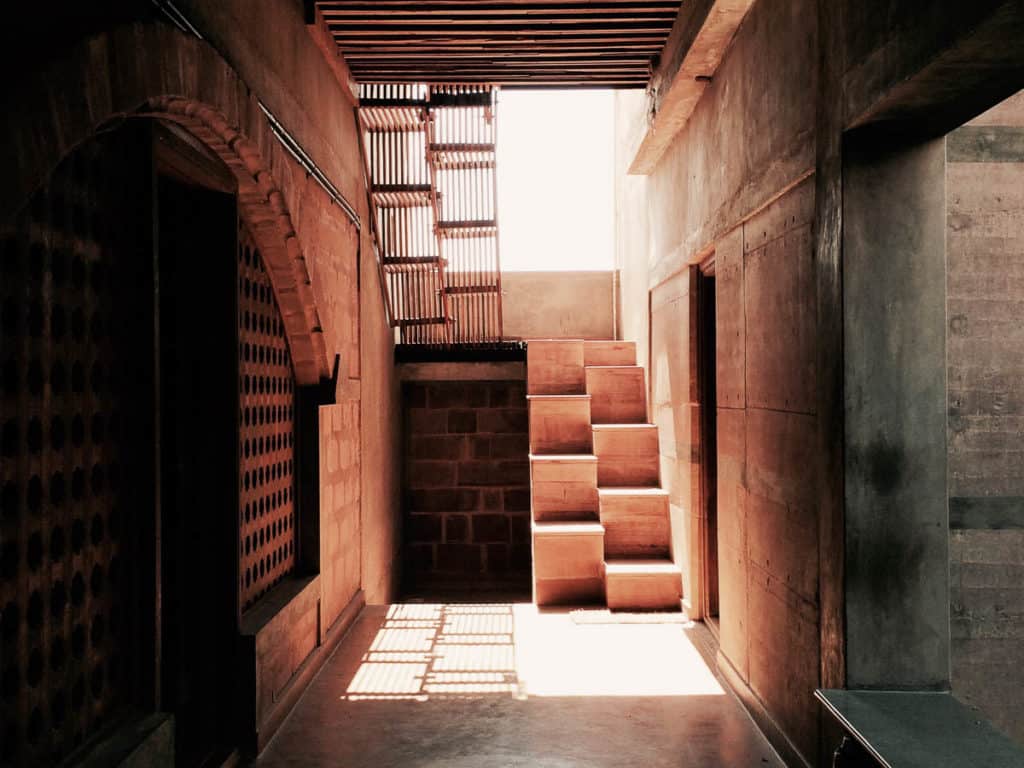 Hunnarshala is a Non Governmental Organisation made up of architects, artisans, engineers and social workers. Unlike traditional architectural practices that focus on constructing single buildings Hunnarshala dedicates its efforts to creating sustainable models of construction for the surrounding community. The members assess the local resources then work with locals to develop technologies that utilise what’s available. They prototype economically viable systems and train the community, leading the construction of the first few structures, then assisting the community as they can continue to build for themselves. 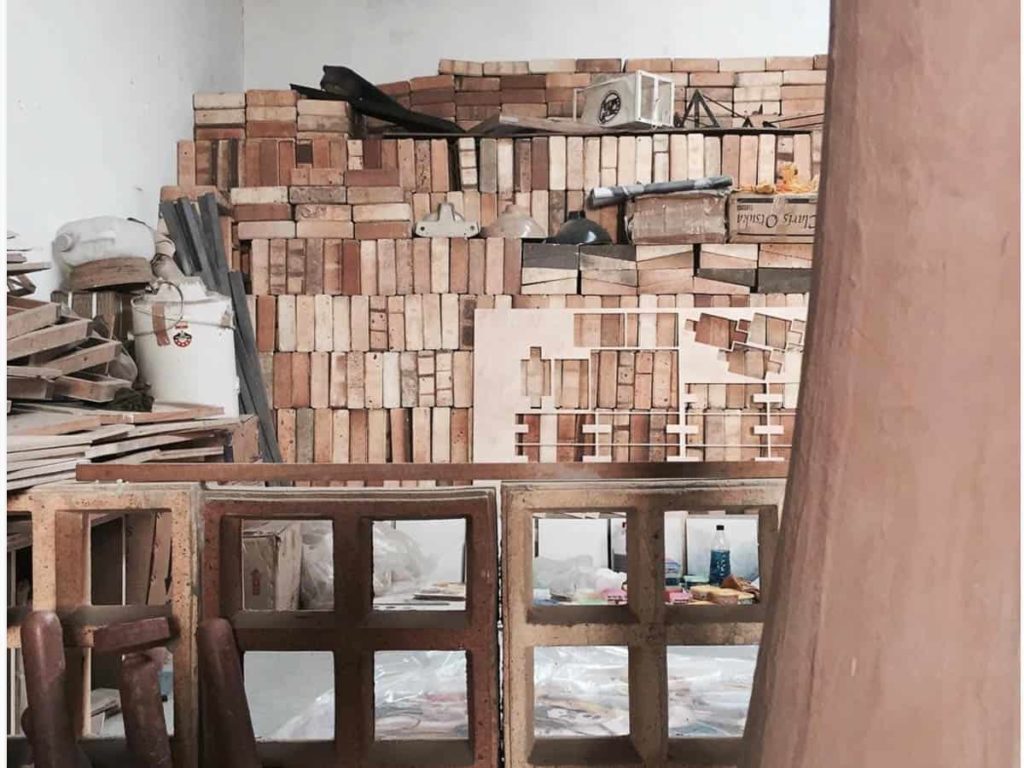 Eight years ago, six students from CEPT university toyed with clay and paper as a form of release from their studies. Today the group is CLAY CLUB—an experimental paper and clay workshop group. In an industrial zone of Ahmedabad they have managed to create a sustainable business out of fabricating highly bespoke architectural and artistic products. They work heavily with local industry, extrapolating upon existing techniques to create new hybrids. Their products range from light fittings, to sculptures, tiles, bricks – even paper bags and murals. 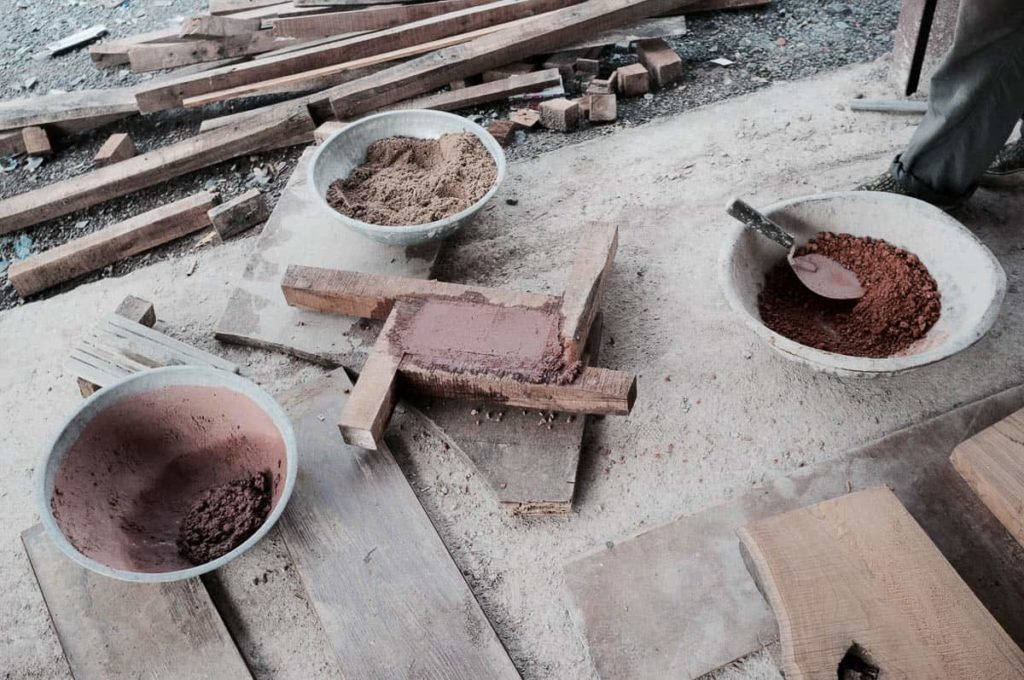 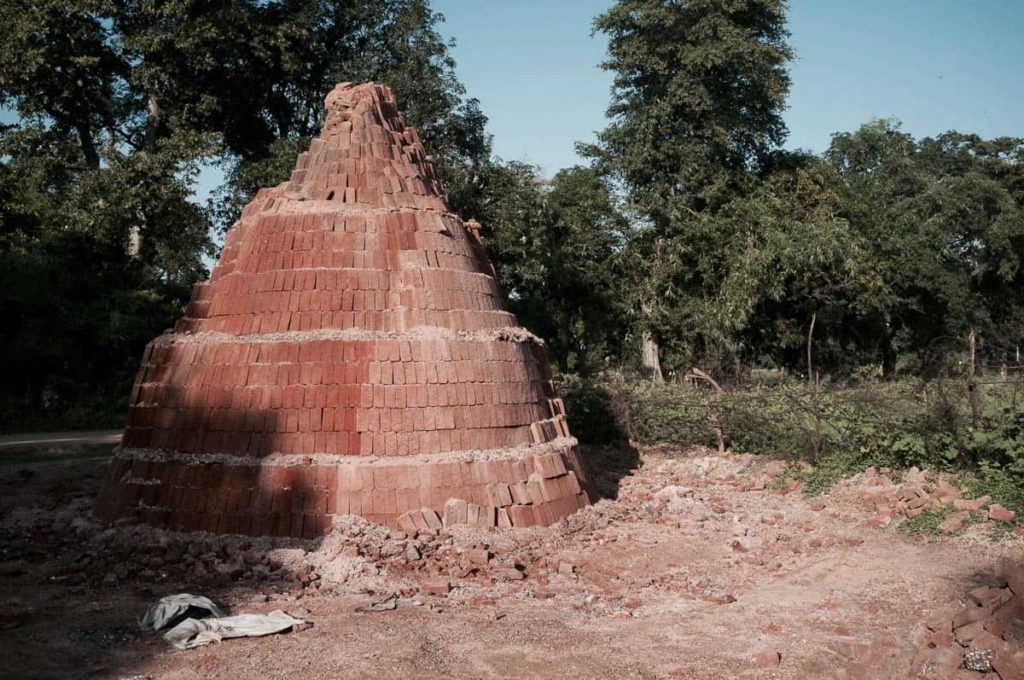 All across India bricks are still being fired in local village kilns. At a certain time of year, clay is dug and formed into green bricks. These are piled in a circular stack and layered with ground coal and mud. The entire structure is set alight for a week using local timbers and coal as fuel. This pile then effectively becomes the brick shop for the remainder of the year, supplying the local area with building materials. Though this process is beautifully simple, it is also the cause of some social and environmental concern. The emissions are high, the work is hard, and agricultural land is often damaged in the process of sourcing the clay. 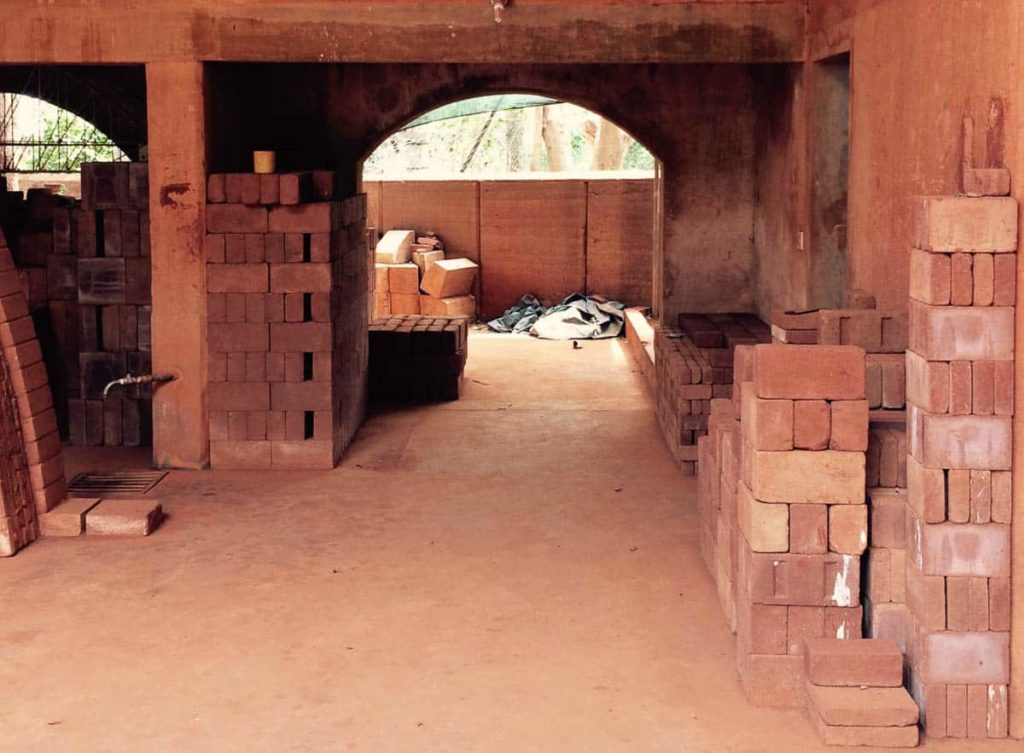 Auroville (City of Dawn), an experimental town founded in the 1960s, is a place where people of all countries come together to live peacefully. The town emerged from the dirt. A previously barren expanse of land on the outskirts of Pondicherry was planted with trees and today over 2000 people live amongst a thriving forest. Many of the buildings are made of earth—their red dirt providing a beautiful colour pallet against the green trees. At the helm is The Auroville Earth Institute—a pioneering research facility of world class standard that prototypes then teaches a variety of sustainable techniques. 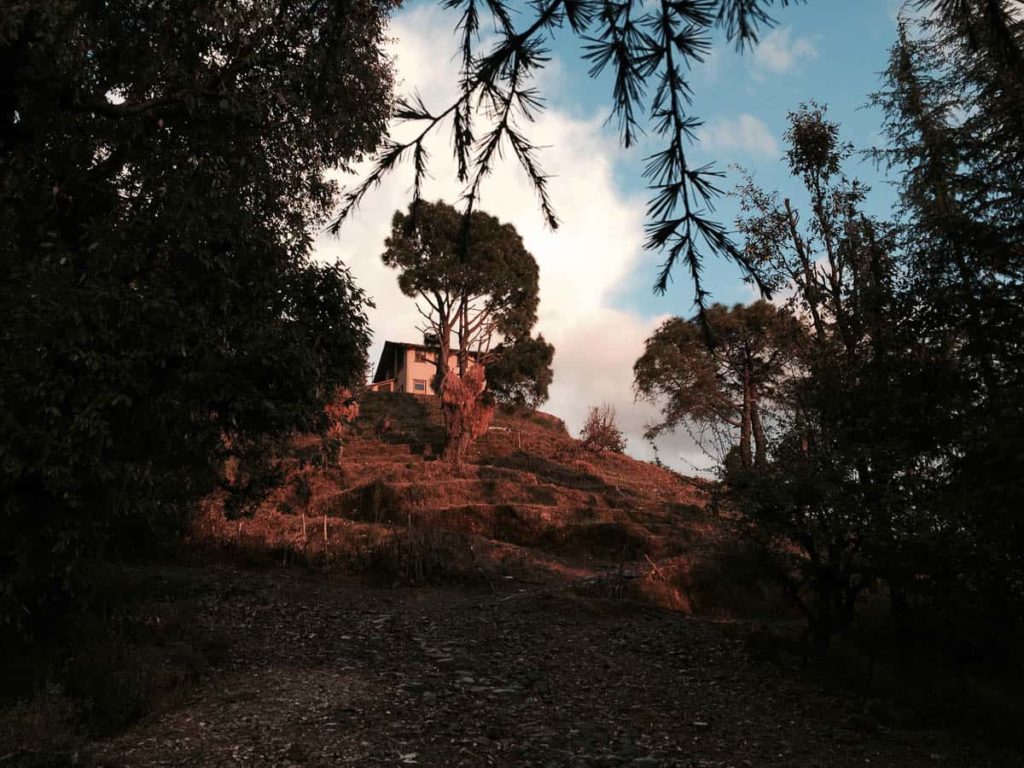 The Dharmalaya Institute for Compassionate Living is a spiritual homestay on a mountain overlooking the picturesque Baijnath subdistrict of Himachal Pradesh. The centre, designed by Didi Contractor, is built almost entirely using resources found close to the site. Mud brick walls are rendered with a cow dung and mud plaster. The floors and roofs are local slate. The centre runs regular eco-vernacular workshops where they teach the fundamentals of their architectural approach – an experience enhanced by the serene beauty of the surroundings. 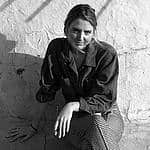 Clare Kennedy is a Brisbane based graduate architect with a passion for designing with local materials. Her inspiration comes largely from travels across India, documenting material techniques and processes.. This photo essay shows a range of ways dirt is still used across india today. In 2016, Clare founded Five Mile Radius, a non profit organisation that dreams of a future where it’s feasible to build using local materials, wherever you are in Australia.

Glimpses through glass of worlds recently lost
Objects of wealth, power and love: An inquiry into Chettiar material culture
Nyibol Deng ✿ A recycled life
Pistachio dog: Indian clothes tailored for the world
A journey shared, India dared and why I take tours…
Worn Land
FRACTURE - show on textiles at the Devi Art Foundation
Kangri: The dilemma of the Kashmiri portable heater