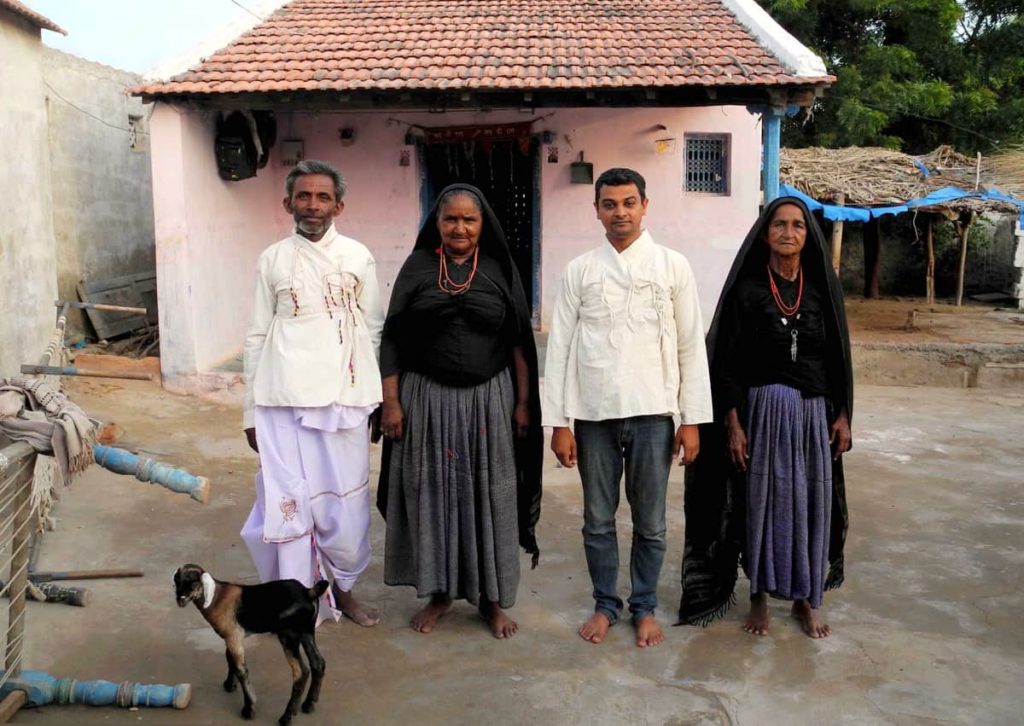 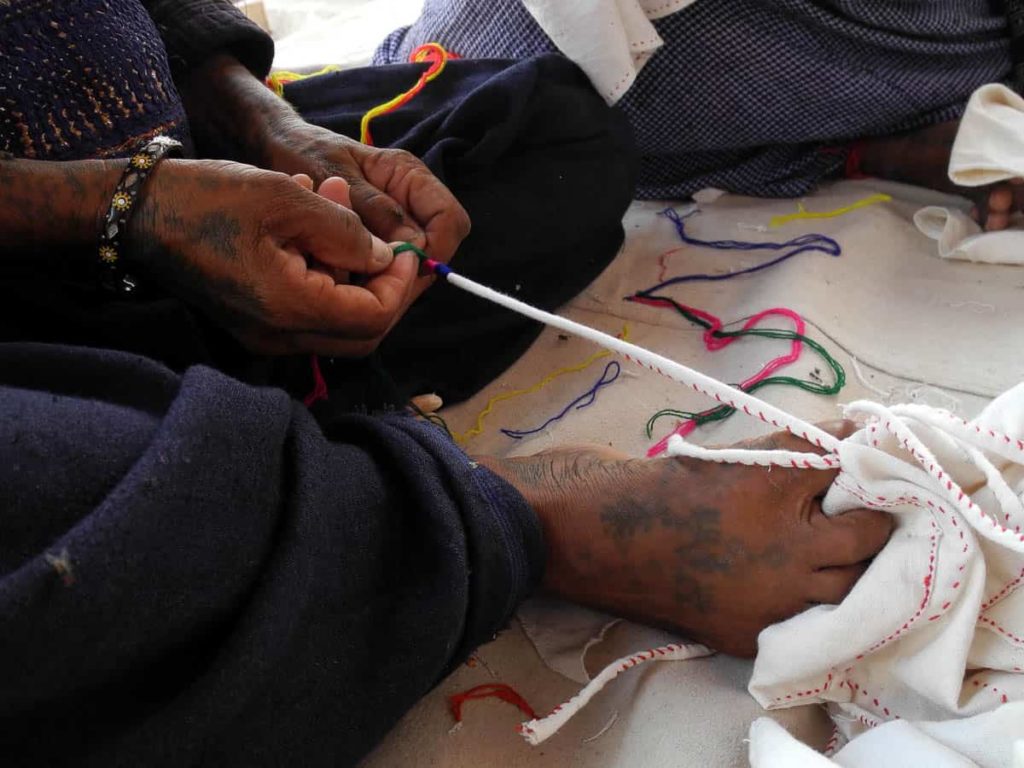 Finishing the dori of the kediyun 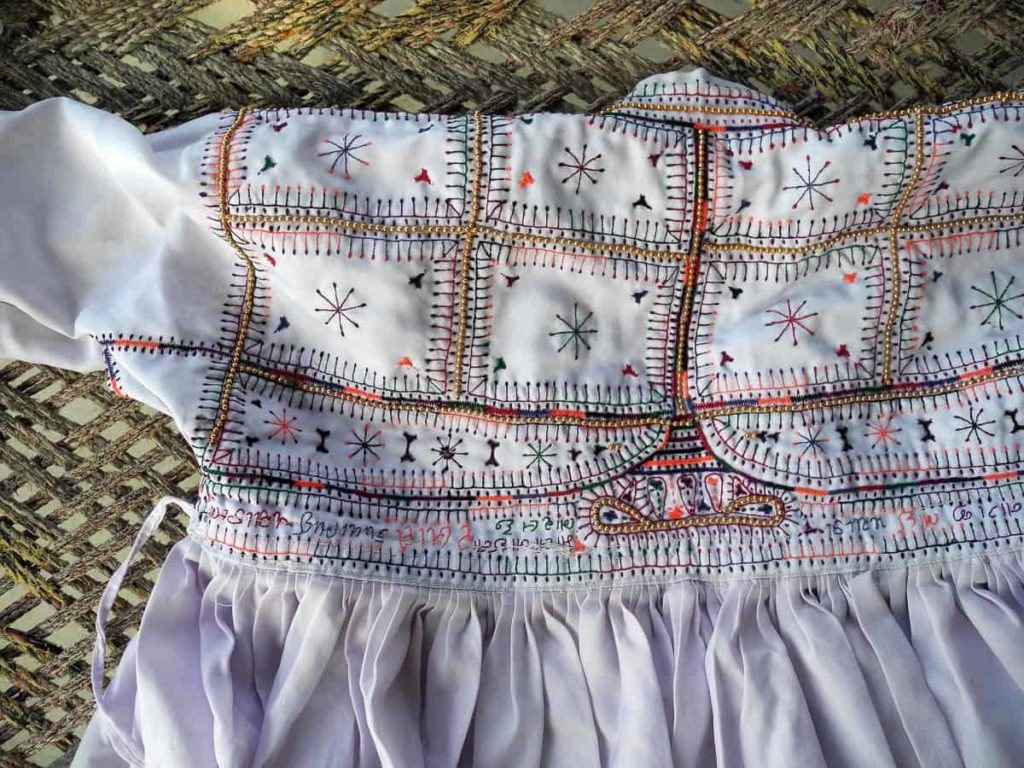 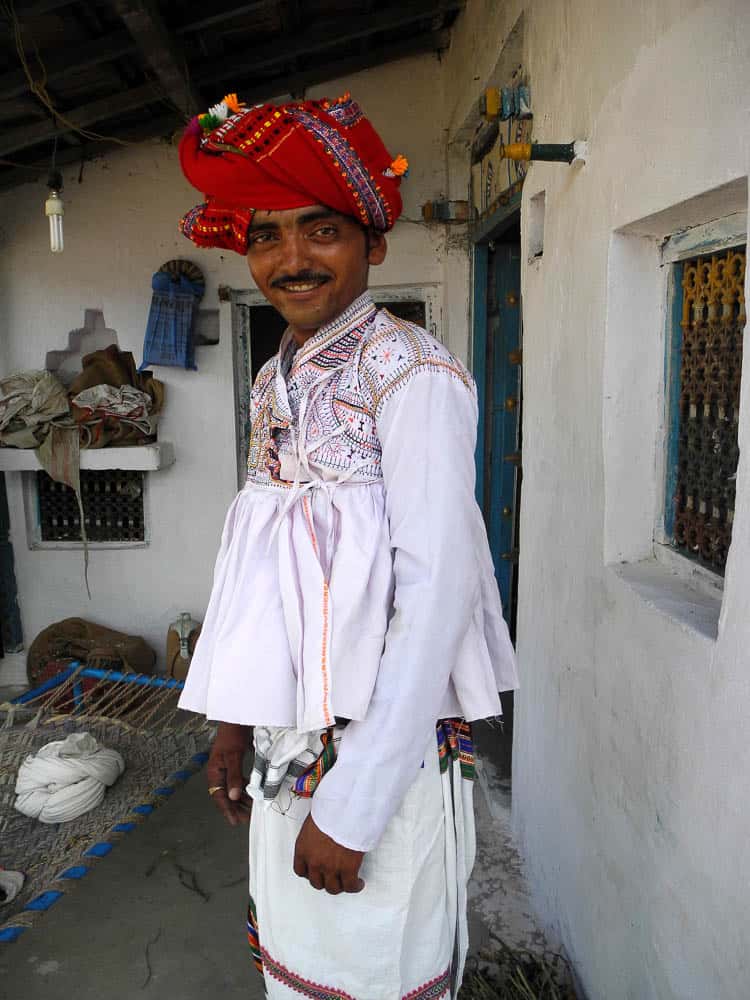 Rabari from Vagad region of Kutch 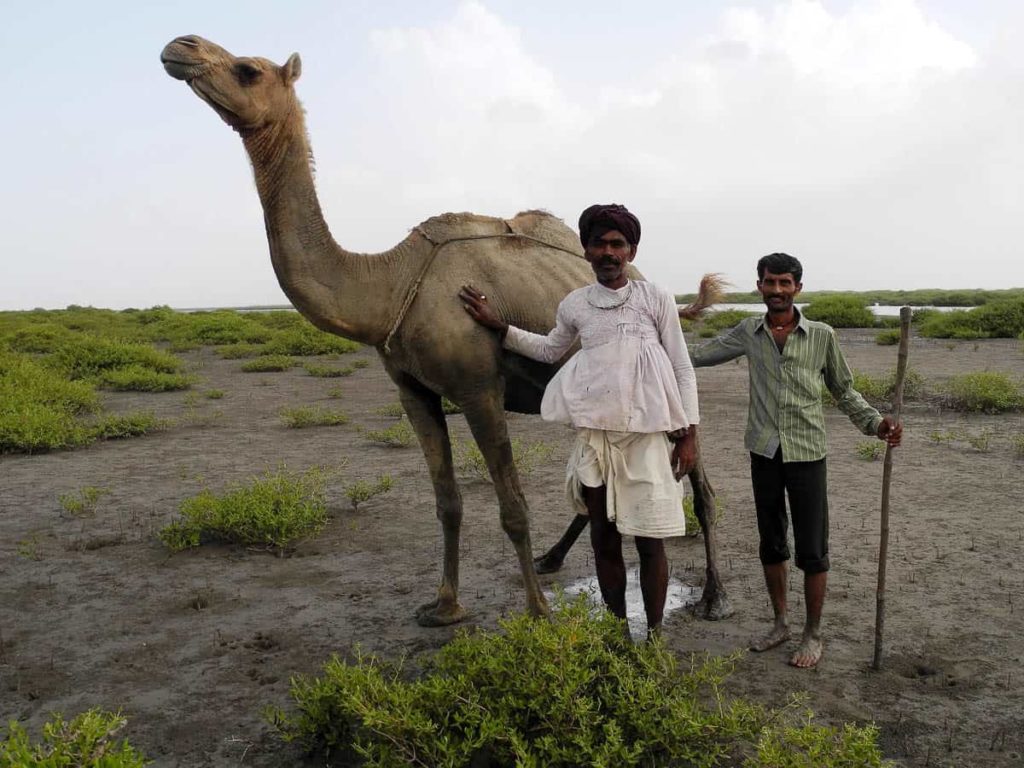 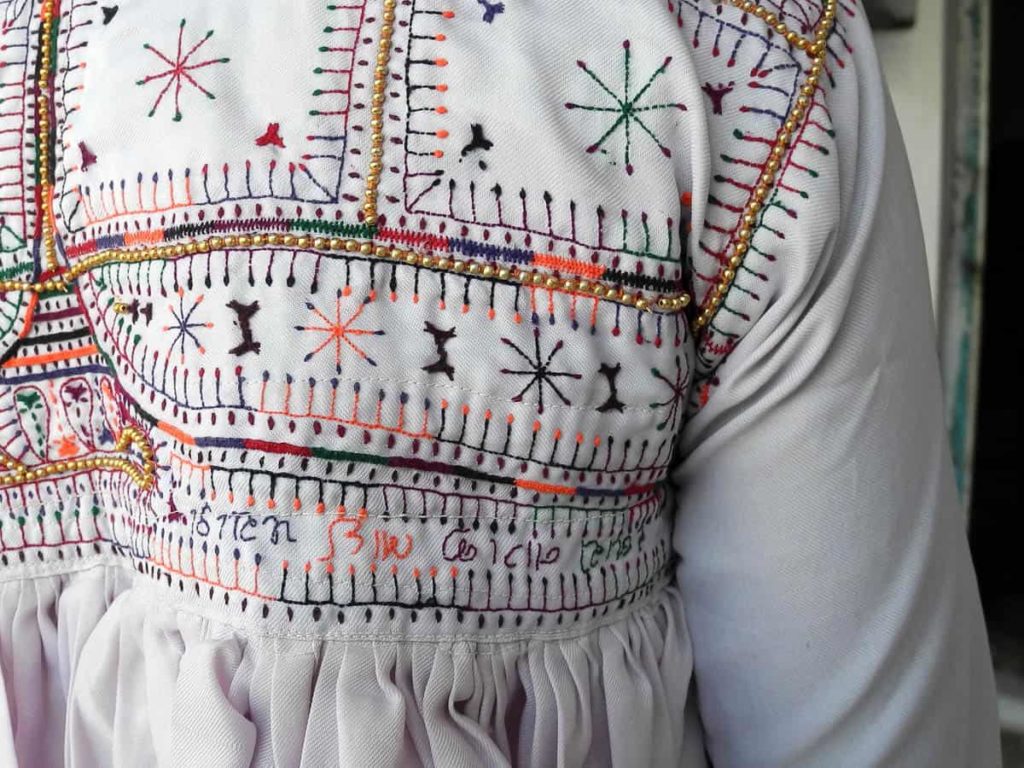 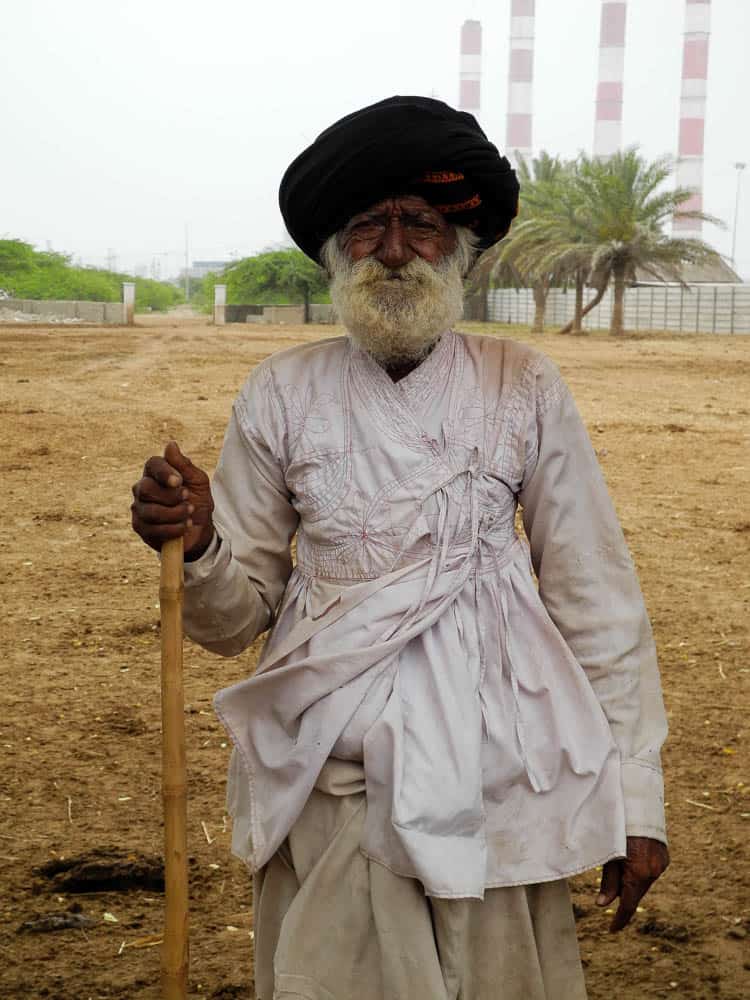 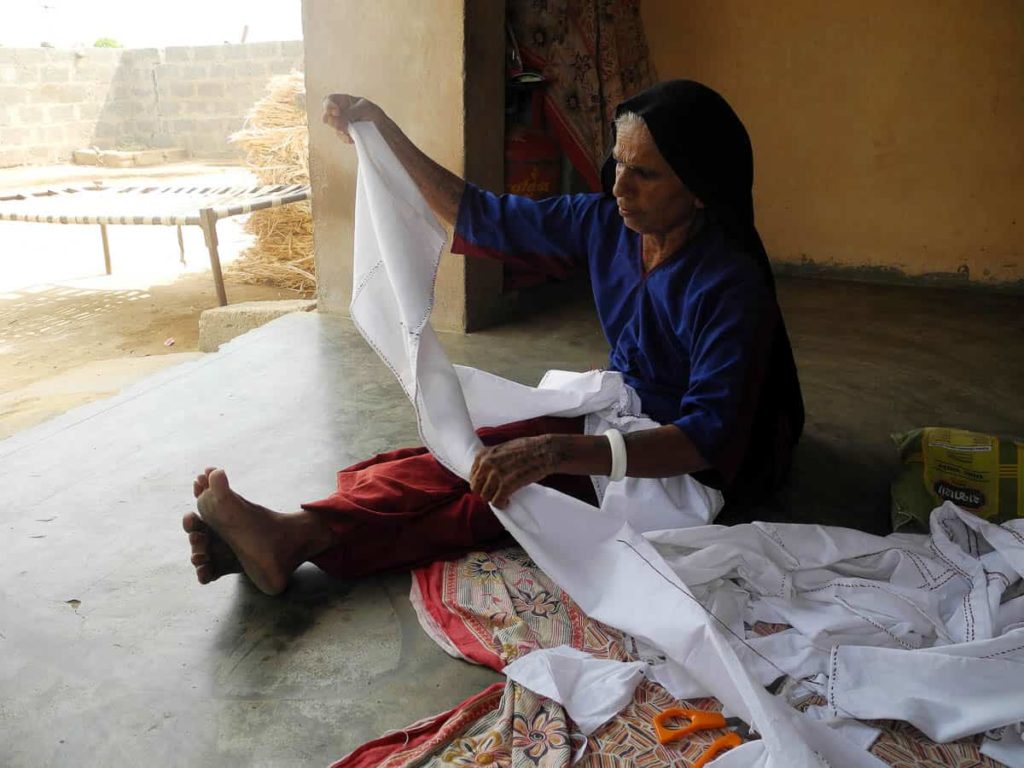 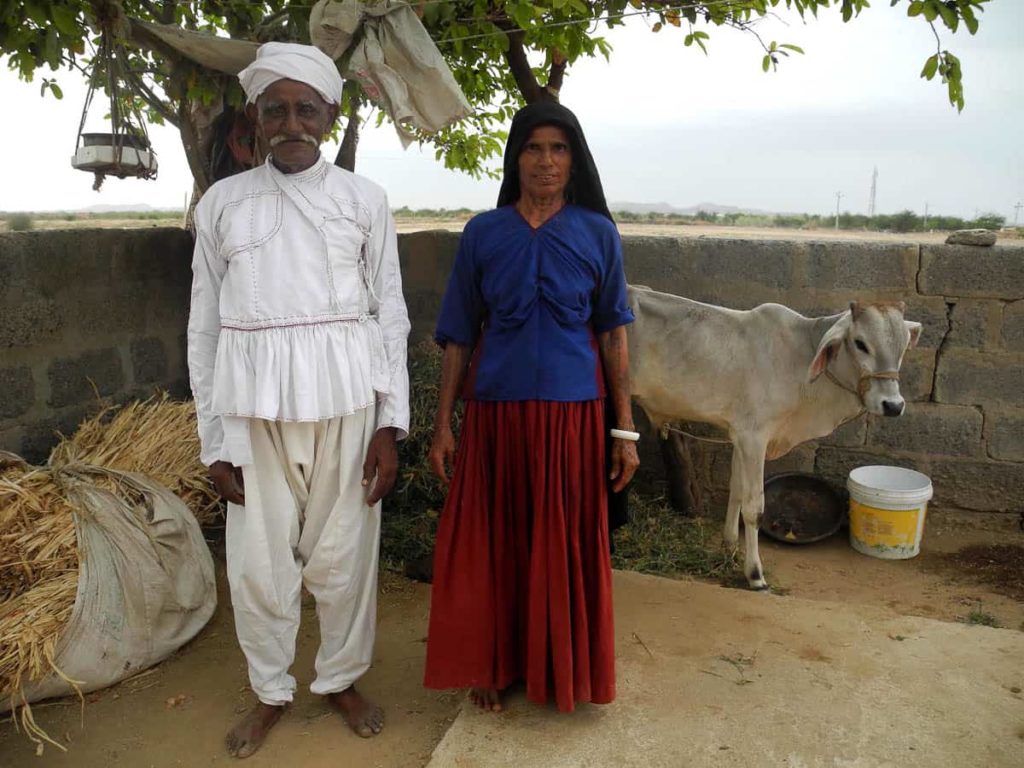 Jamnaben with her husband in the kediyun made by the author 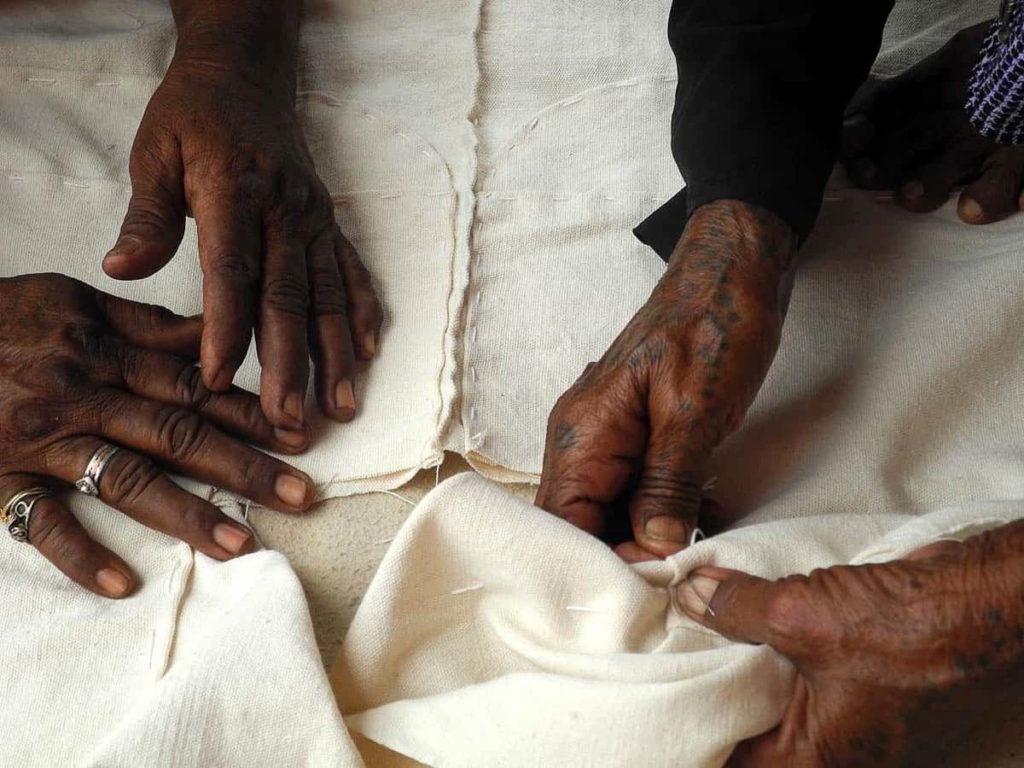 Packing for a fortnight trip I carefully edited to what was essential. I calculated the number of days and the luggage allowance permitted by the airline. But, what would I carry if I had to go for a journey that could last a few months? And what if it this journey was on foot!

The Rabaris of the semi desert region of Kutch, West India, believing they are divinely designated to take care of the camel, migrate seasonally, looking for green pasture. The men of the Rabari community wear an upper garment kediyun (pl. kediya), always white. Regional garments including the kediyun were traditionally made by the women of the family. “Where would you find a tailor in the jungle?” commented Harkuben Rabari. So, it was essential to carry the knowledge and the skills, while making distant journeys. The women learnt the art of making the garments by observing the elders.

With my background in fashion, the dramatic cut of the kediyun had fascinated me. So for my masters research I found apprenticeships under three different makers of kediyun. I learned that long ago men of many ethnic communities of Kutch wore kediya. A few decades ago almost all the women in the local Rabari and Ahir communities could stitch the garment, however only a few could cut it. Cutting involved the understanding of body proportions, taking measurements and cutting the actual fabric. The approach in cutting was zero wastage. Everything was economically used. Understanding the fabric quality in relation to body and stitching is also integral to the process. When regional hand weaving became unaffordable and mill cloth replaced it, the women adapted the cut to fit the width of the mill cloth.

Religious and spiritual beliefs too are central to the making of the kediyun. According to a local tailor, hand stitching is not the same as machine. “With hand stitching your thoughts get stitched with the cloth too.” One day during my apprenticeship, I was told that in honour of Shetla mata, a goddess who has the power to cure or bring small-pox, activities which involved knotting, such as combing of hair or knotting the thread end for stitching, could not take place. It is believed that the Goddess could get stuck in the knot, bringing disease to a child in the family.

Even wearing a kediyun has cultural implications. The first time I wore a kediyun that I had stitched, I didn’t know how to wear it, particularly how to tie the garment. So I discovered how the garment brings two people together in an intimate way. The wearer is brought close to the person who ties the strings, as they stand close, facing each other. This relation is “equal”, as opposed to the feeling of hierarchy when a person stands behind a wearer, assisting him to wear a (Western) jacket.

After the earthquake of 2001 in Kutch, communities’ lifestyles and relationships with the environment saw a drastic shift, at a faster pace than ever before. Industries were introduced in the rural region with the dream of economic growth, often ignoring the local culture. According to Lakhabhai Rabari, “men from our village used to leave for work wearing a kediyun. On reaching the gate of the factory, they would change to pants and shirt as they were told that traditional clothes were not practical. This continued for a few months, after which the most of the men stopped wearing the kediyun altogether.” Kediya for special purposes such as weddings were adorned with embroidery in traditional styles that were distinctive of communities, as were the specific cuts of the garment. Traditionally one style of kediyun worn by the groom was made by his first cousin: the garment became a way of introducing her to the community. Among the young generation, the kediyun is now reduced to ritual wear.

One Rabari women complained that she used to stitch all her family’s clothes—juldi, kediyun, ghaghari. But her daughter in-law does not even know how to stitch a basic ghaghari (skirt); she purchases a readymade version. Machine made ready to wear kediya manufactured in Ahmedabad are available at selected local shops. A few tailors too make copies of the kediyun. However, the approach does not combine the traditional wisdom of the material culture.

Jamanben Ahir, one of the last makers of the kediyun who still continues making and even repairing, was proud to have me as a pupil. Although Jamanaben’s husband wears a kediyun, her son has never worn one. Her daughter, who uses a sewing machine, had previously never recognised her mother’s knowledge. She became curious and started to observe her mother teaching me.

Most of the Rabaris don’t have camels anymore; there are only a few exceptions of families who still migrate with their herds. What these communities do carry is the knowledge, skills and most important concepts of sustainability, slow fashion, well made objects and of style—an approach that could open new ways of thinking if applied in mainstream fashion design education. 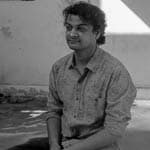 Based in Ahmedabad, India, LOkesh Ghai is a textile artist, researcher and academician working with traditional craft practice. His work has featured at the V&A Museum of Childhood, London; Harley Gallery, Nottinghamshire; Gallery of Costume, Manchester and Ahmedabad International Art Festival. He has been visiting lecturer at numerous institutions both in India and the UK including the National Institute of Fashion Technology, Gandhinagar, Royal College of Art, London and Somaiya Kala Vidya, Kutch, India’s premier design institute for traditional craft communities. Recently LOkesh showcased his work as part of India Street in Scotland; the show was a runner up for the most sustainable design practice award in the Edinburgh International Art festival. Currently he is working with the Warli tribes of folk artists as part of Re:imagine India, towards the 70th year of Indian independence.

My village makes
Pesh boro: Epic weaving from Afghanistan
Tania Larsson ✿ Hide uncovers the hidden
The quilts of Jess and Cynthia Johnson: A mother-daughter partnership
The embroidered house
“If you want to know about us, examine our buildings”: A Journey through Uzbekis...
Offerings for absent friends: An interview with Ro Cook
Indian dirt