Love in a time of colonisation 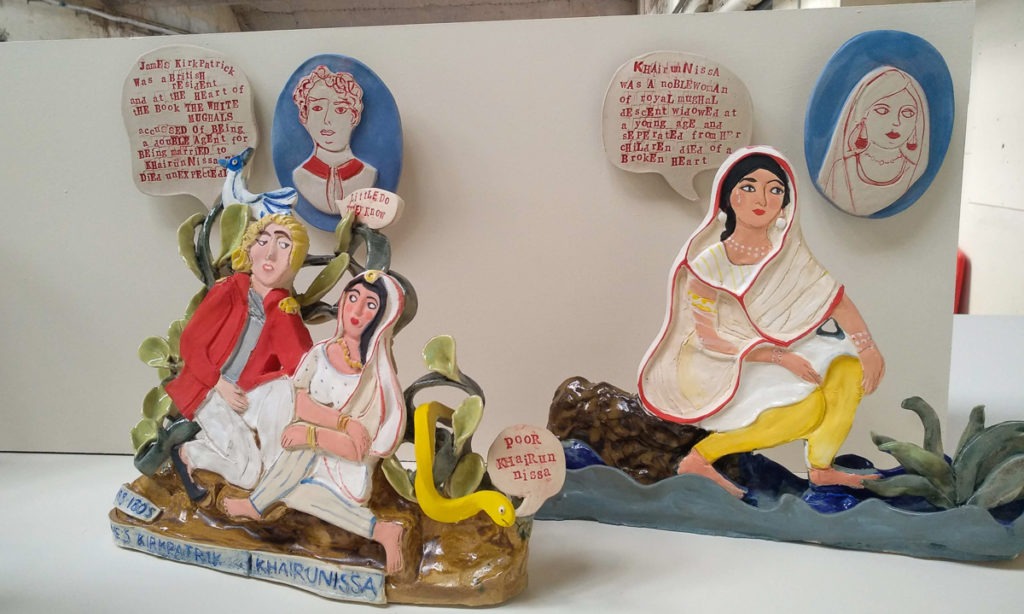 For the work I chose narratives which were to do with acceptance, love and patronage between people from very different worlds, this is still relevant. Some works are based on actual Company paintings from the time, the others are completely imagined as there is no surviving visual reference. The work is also about a short and fragile period from our colonial past which was not allowed to continue and is not common knowledge neither in India nor in the UK.

“Meeting your future wife” is part of a larger work titled “Beyond White Mughals“ that revisits an entangled history of colonial India in early days of East India Company between 1600 and 1700s. This twilight period was marked by a porous intermingling of East India company officials with Indian society. “White Mughals” is now understood to describe the men who made India their home, adopted Indian mannerisms, learnt the local languages and took on Indian bibi’s.

The work combines historical research with a playful re-imagining of characters from this period. It is inspired by the book the White Mughals by William Dalrymple.

As I was researching stories about the White Mughals, I was simultaneously looking at ceramics made in Stoke on Trent in England where my residency was going to take place. I particularly was taken back by Toby Jugs which have a direct relationship with my usual anthropomorphic work and then Flatbacks because they were ceramic nuggets of information of the time and decided to illustrate the stories through both the flatbacks and the toby jugs for the residency.

Staffordshire flatbacks were created in the 1700-1800s and were sort of a three-dimensional ceramic tabloid which depicted heroes, villains from contemporary as well as historical reference. They were very popular within the working class and provided gossip and conversation.

I took the very English flatback and populated them with Indian characters. “Meeting your future wife” illustrates the true story of Job Charnock who is considered the founder of Calcutta. In 1630 he rescued a Rajput Princess from sati while being posted in Patna in Bihar. He happened to be present at the scene and became mesmerized by the young widow.

At personal risk, he intervened and took the princess home and eventually married her. He gave her a Christian name, Mary, but soon was accused by missionaries of converting to a Hindu. They had three children together and he remained devoted to his wife till he passed away.  He never returned to England.

For the work, while referencing images of bride immolation, I found that sati was a public spectacle where the widow would be surrounded by the family members and priests on top of an already burning funeral pyre and it’s a proper ritualistic performance. I wanted to keep the focus on the two main characters, hinting at what’s to come and not deviate or dilute with what was going on. We have a young widow who has no way out and probably no choice and Job Charnock, just like a hero from a Bollywood film, happens to be present at the right time at the right place and saves the day. While careful attention was paid to get the expressions and body postures right, I had to add a dialogue box saying “Don’t do it” to capture the mood perfectly.

The Sad Story of Khair-un-Nissa 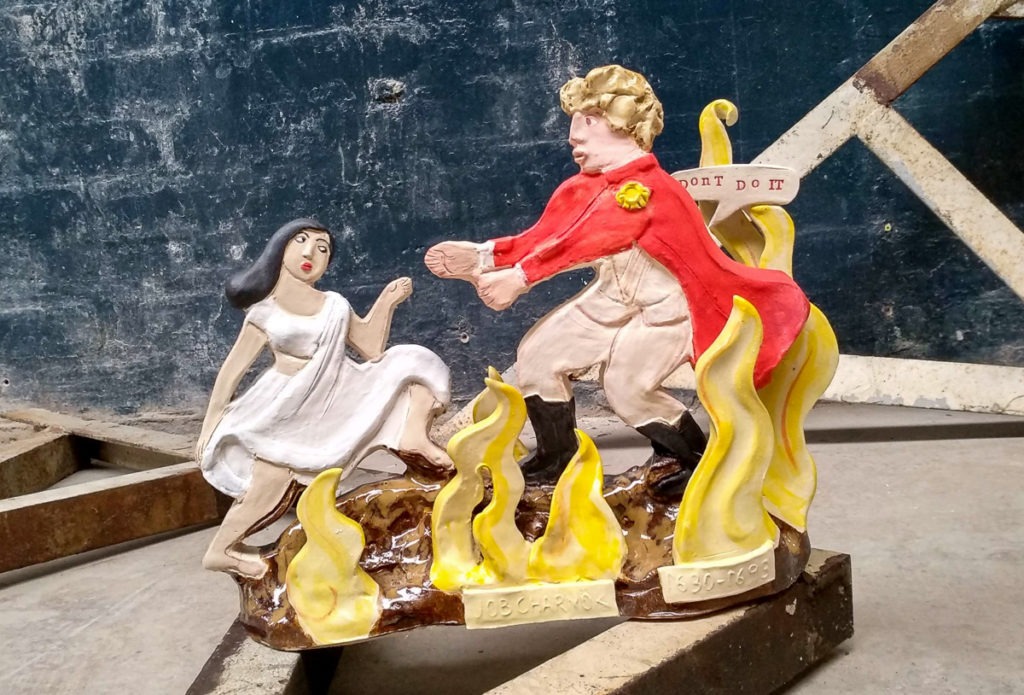 Unlike the story of Job Charnock this one is a tragedy. James Kirkpatrick and Khairunissa were not as lucky as by mid-1700’s it was looked down upon to have an Indian wife or mistress. While still being aware of this fact James and Khairunissa not only got married but James even converted to Islam in a private ceremony.

They had two children, William and Catherine, who were sent to England for education at a very young age, which was common at the time for children with mixed parentage. Once the news got out, their marriage was seen as a scandal, as the new policy completely disapproved Indian and British liaisons. The same year James died unexpectedly leaving Khairunissa alone separated from her children. As years passed the children never returned from England and Khiarunissa died young at the age of 27 of a broken heart.

This complex love story was difficult to illustrate and I had to break it into two separate flatbacks again keeping the central characters at the heart of the work.

One which shows the couple in happier times in a garden and the second one in which Khiarunissa is sitting alone a melancholy figure. The resplendent garden in the previous flatback is now missing.

The stories are fascinating because friendships and alliances were formed despite all odds being stacked against them. A Queen (Baiza Bai) who deeply mistrusted the company forged a friendship with a wife (Fanny Parks) of an East India Company officer. A painter from Germany (Johann Zoffany) finds patronage with a king and paints the most vivid images of the Indian subcontinent.

These individuals went beyond their personal identities to understand the other and this is what makes them relevant and still interesting to us. 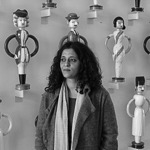 Shirley Bhatnagar lives in Delhi with her husband Ishan Khosla. She studied ceramics at the National Institute of Design, Ahmadabad While the use of humour is evident in her work, she uses narrative to comment on social and political issues.

E-commerce: what is gained and lost when artisans sell online
Minoyaki ceramics and the mystery of kairagi
A textile selfie, with love from Rajasthan
Next generation patua: The Handmade Tales project
Kandura Studio: Making studio ceramics in Indonesia
Embracing unpredicability: The collaboration of Laxma Goud and Adil Writer
New Primitives in Kyneton
The forest on my flesh