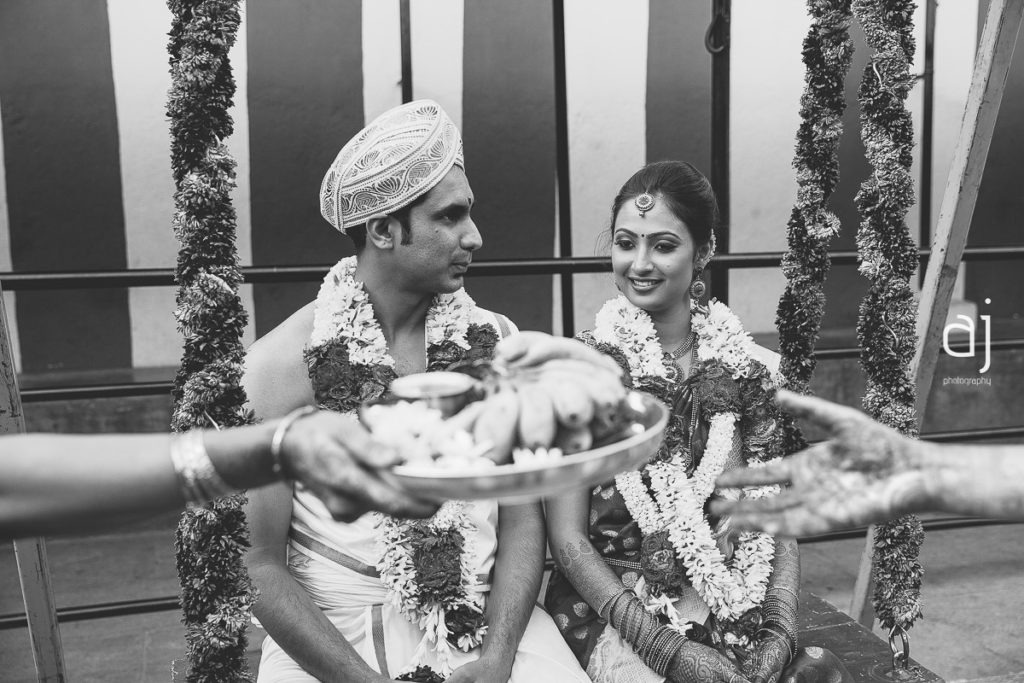 Manasee Jog reveals the many games created for Indian brides and grooms to get to know each other.

While growing up in India I had witnessed countless weddings of friends and family. But it was only when I got married myself that I understood why the rituals are so important.  Like the saptapadi, when a wedding vow is pronounced after each of seven circumambulations around the holy pyre.

The exchange of jayamala (garlands) is another important part of any Indian wedding ceremony. At my own wedding, the priest told me it was important to garland my partner while looking into his eyes, as that seals the union well. Looking into each other’s eyes allows your partner to see your true intentions and commitment. This is one part of the ceremony that has not changed over centuries when garlanding each other signified a formal union between two people. Today, to make it playful and interesting for the newlyweds, they are each lifted by family and whoever is lifted the tallest finds it easiest to quickly put on the garland. It is a light-hearted, fun moment in an otherwise solemn ceremony.

Marriages in India are an important part of the social fabric and the socio-economic culture of the country. They are also a unique ceremony that varies according to religion, region and community. The history of weddings in India is checkered.

It starts with a garland 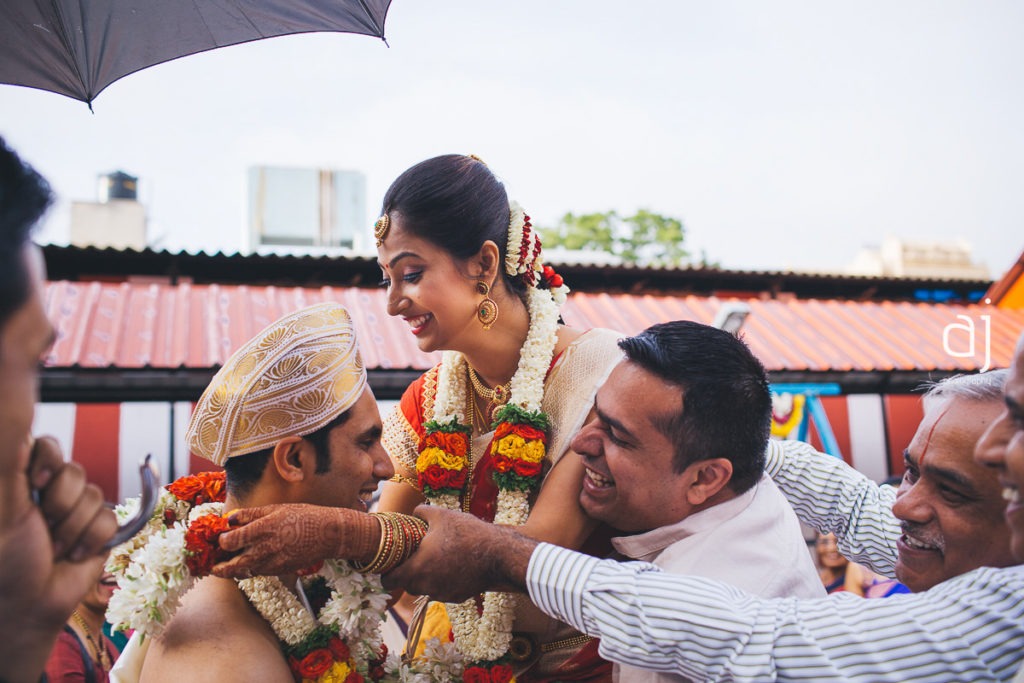 In Tamil Nadu for example, it is said that in times of yore, there was no concept of a wedding. Communities were part of villages and if a commoner liked a girl, he would approach the woman’s father, asking for her hand. Only if he proved his worth to the family by performing acts of strength like maplekal (the man would be asked to lift the largest stone possible), or fight gushti with the local masters and win the fight, was he allowed to marry the young woman. Elders in the family say that sometimes other scenarios played out like a young man offered a woman he liked a garland and if she accepted, it signified a promise of his love to her. This was considered an act of declaration and a promise that from that day on, they were committed to each other.

It was only during the Vedic times that things changed. According to Hindu scriptures, a person’s life was divided into four stages: birth, adulthood, parenthood, old age and death. As part of adulthood, they had duties to complete: one of them was finding a suitable partner for their children. Thus, the idea that a solemn ceremony must happen to complete the union of the selected match came to form what we celebrate as weddings. The majority of marriages that happen in India are arranged marriages. Today, it has its own form and tradition.

Most of the facts shared with you are from my findings, research and conversations with friends and family from the South of India, where I grew up. India is a melting pot of regions and some of my explanations might be different from what you’ve heard or experienced in your own weddings. Even though I specify a region and religion, most of the storytelling and symbolism refers to every day lives of human beings and the best way to live it.

Everything revolves around ritual in a Hindu wedding. It symbolizes many values, narrated through the lens of tradition, duty and morality. The best way to represent these symbolic traditions is through objects by using themes and context for each of them. Over centuries, objects have helped connote or aid certain aspects of a ceremony in weddings. Some ceremonies have lost their original usage and meaning and over time have been transformed into new meanings through the usage of objects.

For example, the kalash, or holy pitcher is a medium-sized copper pot used to symbolise the five elements of the universe: earth, water, air, cosmos and fire. These elements are very important in any holy ceremony as life itself is based on these ephemera. Another example is the use of a bamboo pole outside homes; that serves a dual purpose: to announce the celebration of a wedding in the home and to ward off the evil eye of others cast on a celebratory home.

Fishing for rings and finding each other 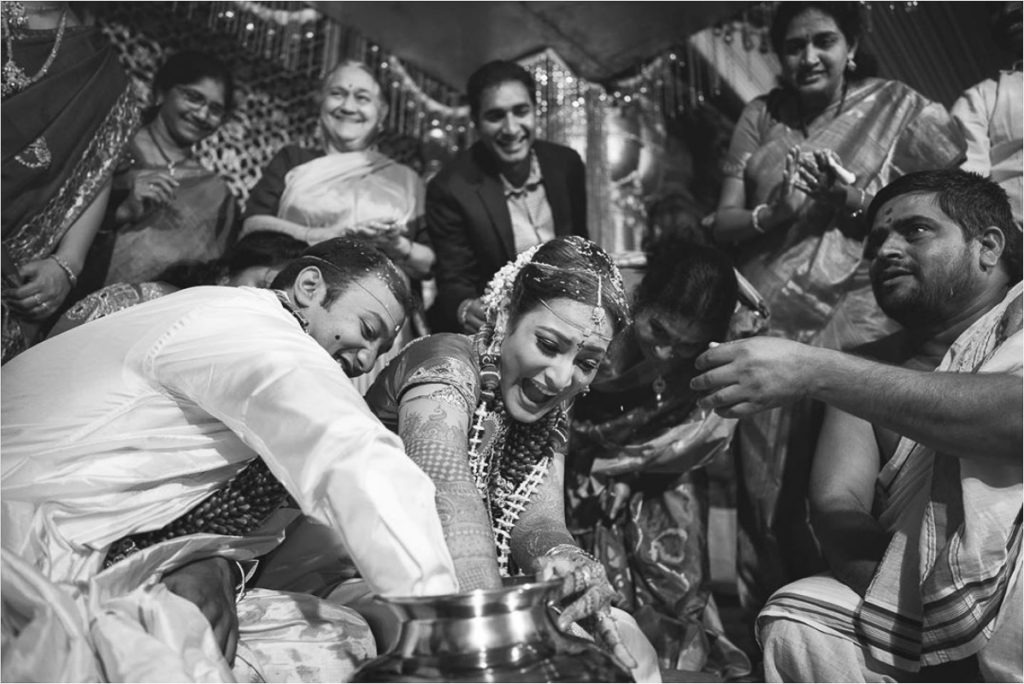 A wedding today is a space to accommodate and entertain your family, friends and extended family; all while ensuring the ceremony goes off without a hitch. All this can be stressful for everyone, especially the two people of the hour who sometimes go through three to five days of ceremonies that revolve around duty, religion, morality. There is very little time for them to relax, get to know each other a little better as this match is arranged by the families and the couple are yet to get acquainted.

To remedy this, there are some ceremonies created to intersperse with the main wedding that are much more light-hearted and allow the couple to converse, get to know each other a little better since one is practically committing to an almost stranger! These ceremonies aid the couple in getting comfortable in each other’s company. The central theme is a meet and greet through fun and games with particular objects. Playfulness and teasing is also part of this chaperoned courtship. These objects are more objects representing love, patience, understanding and commitment.

One of the Tamil weddings that I attended had an interesting game for the couple called “fishing for rings”, which involved looking for each others rings in a pot of coloured water mixed in with other metal objects in the water (to increase the difficulty factor). It is said that the person that finds the rings first will be the one making all the decisions in the family! Though these ceremonies are enacted with a lot of people present as chaperones, it is a great time for the couple to unwind and relax.

Another wedding game that revolves around the ring is the “find the finger” game. The bride groups and folds the fingers of one hand and covers them with her other hand – except for the tip of her folded fingers. She presents the fingertips to the groom. He has to find her ring finger to be able to put on the wedding ring. The bride can make it as difficult as possible for him to find the same, signifying that life isn’t always going to be smooth and simple and one has to embrace the ups and downs. 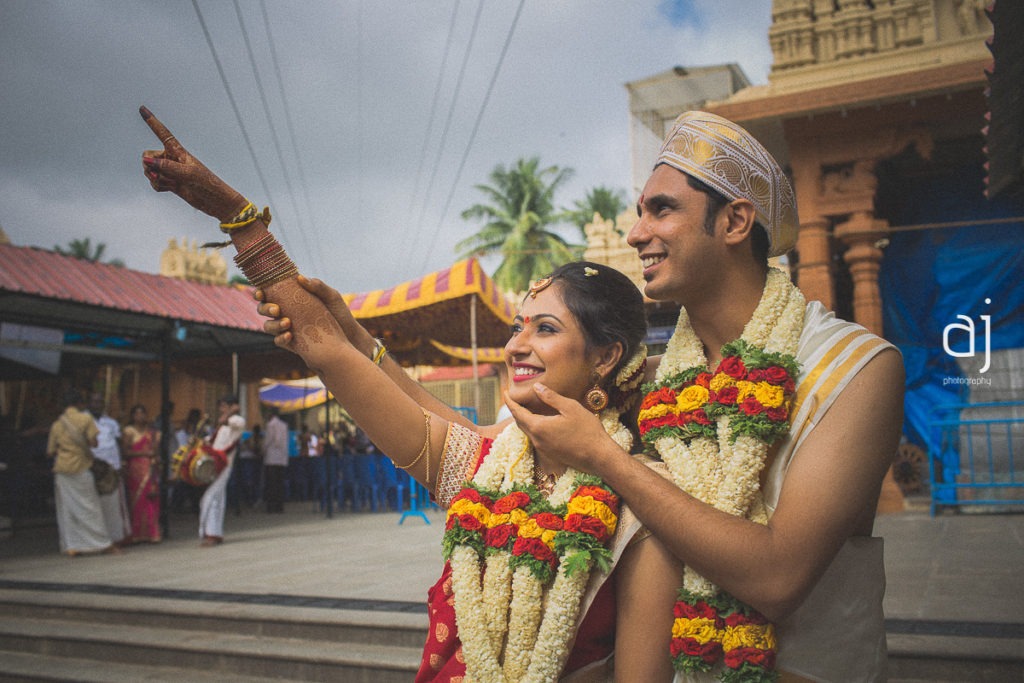 “Thengai Uruturathu” is a game of marksmanship. The couple is seated opposite each other, about eight to ten feet apart, and then the coconuts come in! Coconuts are hard fruit to crack. The aim is for them to roll each of their coconuts with force toward the other at the same time. There are three attempts. If the coconuts crack/break when they collide with each other it is a sign of good luck for the union of the couple.

The “unjal” or swing ceremony takes place during the wedding rituals and allows the couple to take a break from sitting in front of the pyre. The couple sits on a swing and gently rock on it while the priest continues with his prayers, blessing the couple. This allows them time to have a chat and connect during the hectic day. The rocking of the swing signifies the ups and downs of married life and how they will face them together.

The “arundhati nakshatram” is another ceremony that is, in my mind, a rather romantic one. Arundhati was the wife of the sage Vashishta. Their love and devotion to each other as partners was unparalleled and is spoken about even today in Indian mythology. Arundhati is now revered as a star (or nakshatram). It is a morning star and, in the ceremony, the couple hold each other, look out for and point in the direction of this star hoping that they can also be successful partners to each other. 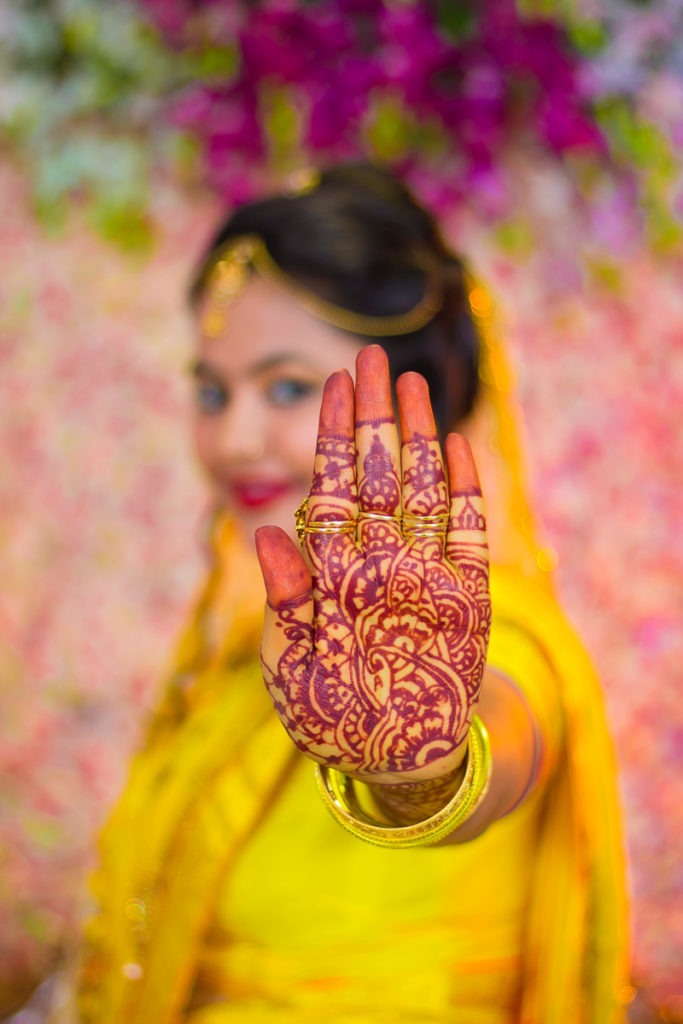 The bride applies henna on her hands before the wedding. Cleverly hidden within the patterns is the groom’s name. It has been made to look a part of the design. The groom is then asked to hold her hands and look for his name. It is said that the festivities cannot continue until he locates his name. This is a difficult job as the henna artists make the patterns as arduous as possible.  This ceremony signifies the need for patience from the groom during his interactions with his partner, through life.

The more the regions, the more these crafted games. But why does the marriage ceremony have symbolic games? What inspired them? In India and the world over, many are sceptical about arranged matches. However, the reality is quite the opposite. Cultural norms toward marriage haven’t changed much in India and many young people are very open to arranged marriages. Anupam Mittal, the head of shaadi.com (a popular matrimonial website in India), endorses this on a CBS interview; “When we think about love in India, it’s not necessarily a chemical reaction where you fall in love. You find love out of respect for each other over time.” In a sense, these marriages are crafted and they are being re-designed with every generation, but the original idea of it being an arranged match still remains, and so do the narratives.

Can we as artists and makers of this new age, look at new ways to symbolise these stories that aid courtship, love and commitment? 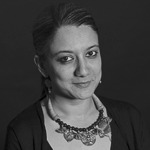 Manasee Jog is an educator, visual artist, designer and researcher. Her research interests include narratives of personal histories, gender, body image, craft and visual culture. She explores these contexts through 2D and 3D mediums of printmaking, paper-mâché and collaborative work in other mediums with fellow artists/designers. She teaches at RMIT University, Melbourne, collaborating with students through dialogue and critique, while also encouraging them to develop lines of inquiry and personal narratives through research and design thinking. Currently, she is also researching artisanal communities in India and how community art benefits societies. Manasee has, in the immediate past, had group shows of her prints and public installations in Bengaluru, India and has also taught there at the Srishti Institute of Art, Design and Technology.

Objects of wealth, power and love: An inquiry into Chettiar material culture
A kirpan for bride power
Our Paiwan wedding: The importance of a dowry
With the blessing of Gods and families: A Mauritian Tamil wedding
The angels of Dhadhampatti
Pistachio dog: Indian clothes tailored for the world
Where did all the flowers go? Tamil festivals in Mauritius
Safed: The beauty of simplicity