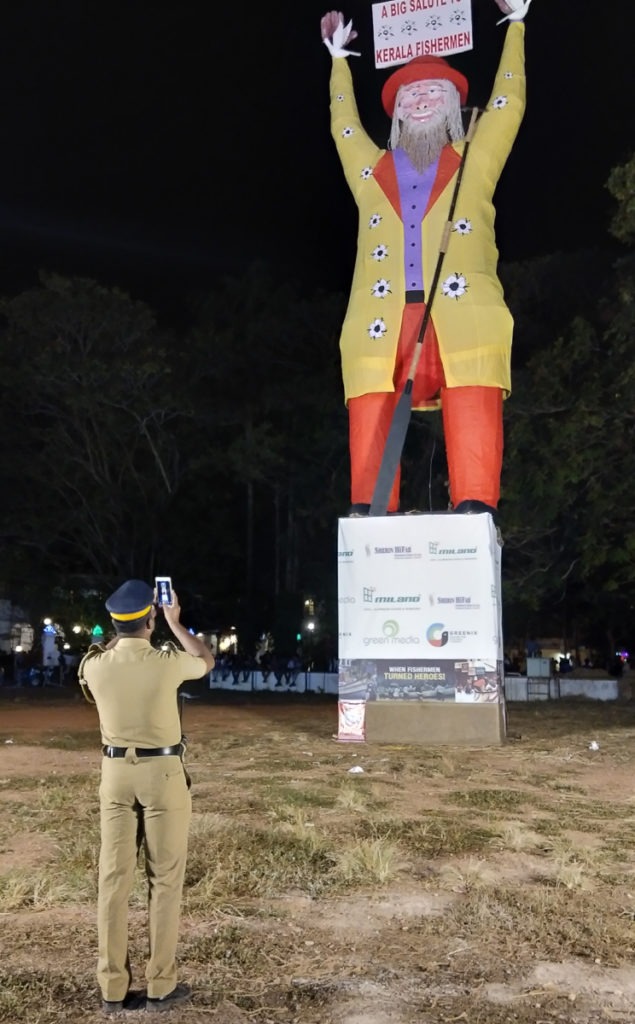 The first time I saw the Pappanji was midnight 31 December 2012 on the then expansive beach of Fort Kochi, Kerala India. This was the first year of the now famous Kochi Muziris Biennale of Contemporary Art (KMB). A crowd of around 8,000 people had gathered on the beach circling the 35 foot high structure. He was a figure dressed like Santa Claus, made of cotton cloth wrapped on an iron structure welded together by a team of crafts people artists and designers working day and night. By midday 31 December he was in place, filled with incendiaries and ready to be ignited. 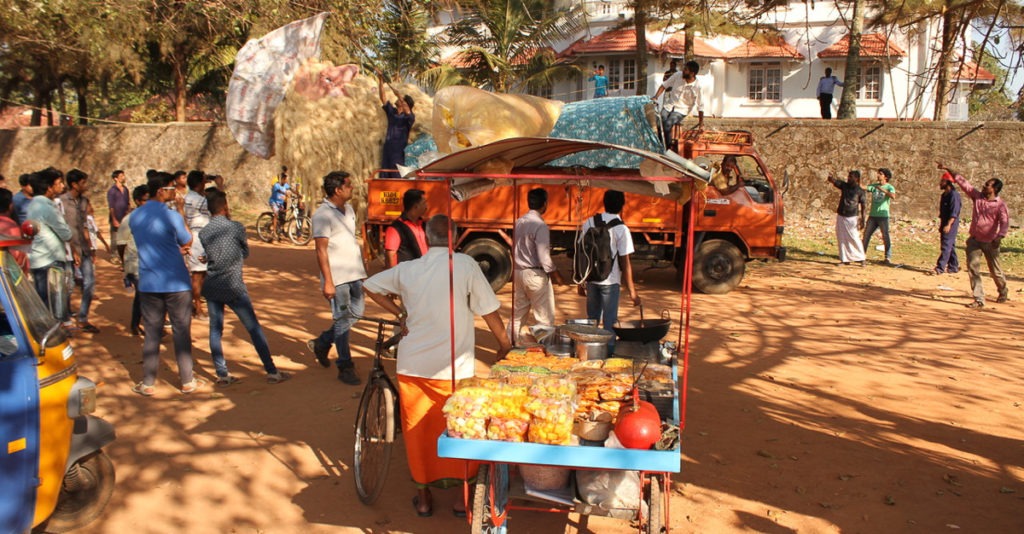 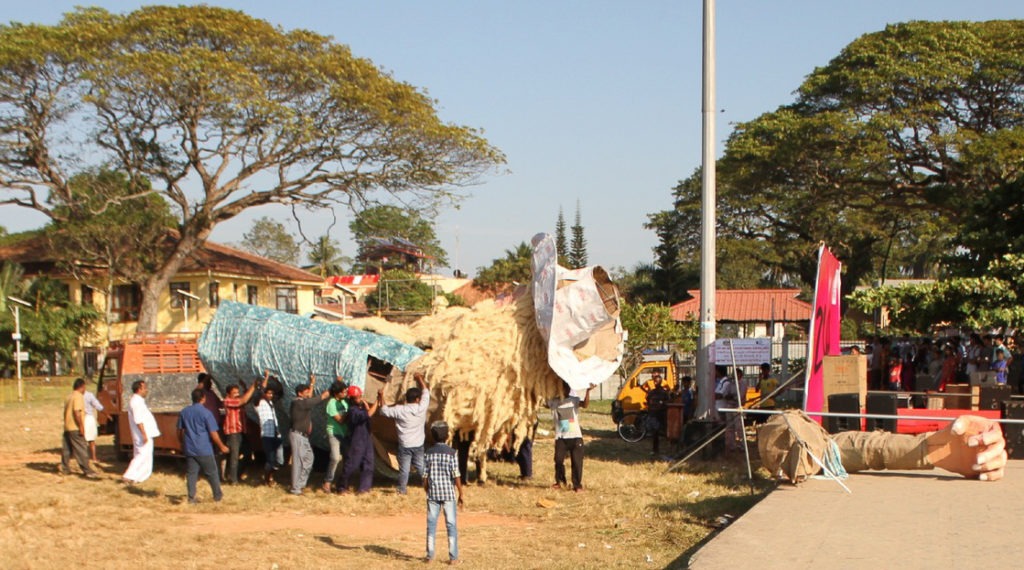 The crowd was joyous, festive. It seemed the entire community of Fort Kochi had turned out as well as 1000s of people from neighbouring cities, and a few tourists. We were about to witness a ritual performed in public and repeated in the streets of Fort Kochi, which had continued for over 400 years.

Pappanji had always been part of the famous local Kochi Carnival, but in 2012 this small, coastal ancient walled town had been transformed by the KMB. Artists and Art administrators from all over the world had gathered over the previous six months to make art work, visit venues and engage with contemporary Indian art in this small village-like peninsula town, the centre of the 5,000 year old spice trade. Its warehouses and docks and canals and bazaar lanes had become their home. Amid inevitable controversy, suspicion and curiosity, the local people had finally embraced this new festival of making strange things, just as they had absorbed each wave of new migrant community and new faiths over centuries. Contemporary art was like just another faith community whose objects of worship were no more or less unusual. So this year Pappanji seemed to face the world, from his rock ledge on the edge of the Arabian sea. He was overseeing Kochi, this 3000 plus, year old example of successful multiculturalism and in his destruction would purge ill-will and unite the community to start the new year.

That night I had been sitting with new local friends on the end of a broken jetty nearby, watching dolphins. We had all worked hard in the heat and humidity of the previous weeks. The KMB had brought us together. We had taken risks across cultures, exposing our vulnerabilities as we made artwork. This spirit of collaboration and encounter spoke directly to the significance of Pappanji and Fort Kochi. 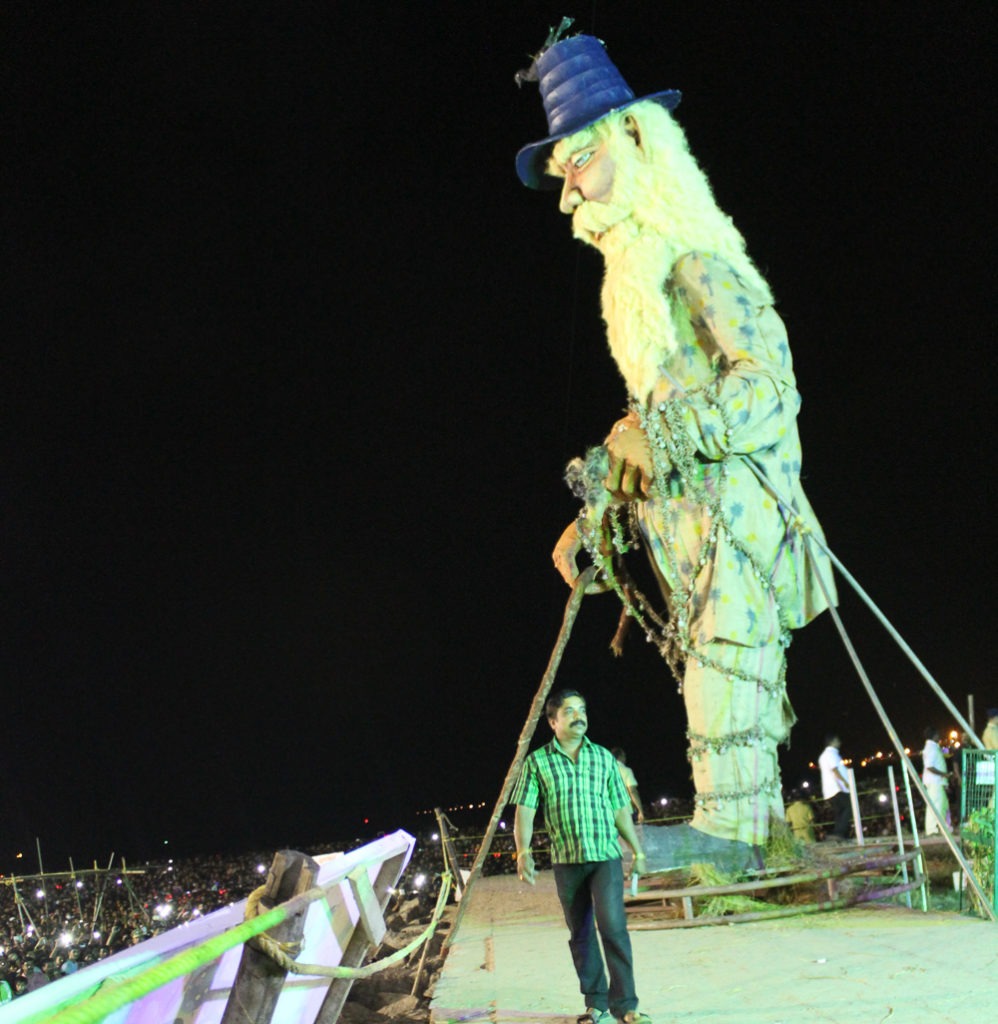 The move toward the beach and Pappanji started about 11:15pm. I was swept up in the crowd of locals, moving pilgrim-like to the beach. I lost my local friends and then realised by accident that I was walking in a current of dignitaries, the Lord Mayor of Kochi, political leaders and entourages all dressed in the traditional mundu, the white fabric wrapped in a tube from waist to ankle worn by men in South India. In the thick crowd I was sucked into VIP area, over a cordon and found myself in a clearing at the base of Pappanji. Music was loud, people danced, some leaders tried to make speeches but no one could hear. The crowd, in expectation cheered at anything.

Then a countdown started 10, 9 , 8, 7…. etc. A 40 foot fuse was lit. 6…5…4…3….It reached the feet of Pappanji as 0 was roared… and then a few crackers exploded. A few more cracked, with light and sound. Then the deafening roar of the crowd was silenced by an immense explosion of light and sound. Hundreds of fireworks erupted through the legs and then the torso of the old man. As it grew, we in the VIP area realised were far too close. We ducked for cover, shielding our faces from the blinding light, the heat and the expanding fireball. It was, it seemed an uncontrolled spectacle. Pappanji was engulfed in flames and the explosions ceased and with a roar, the crowd resumed its dominance. Camera crews reporting live asked bewildered tourists like me how I felt. What could I say? 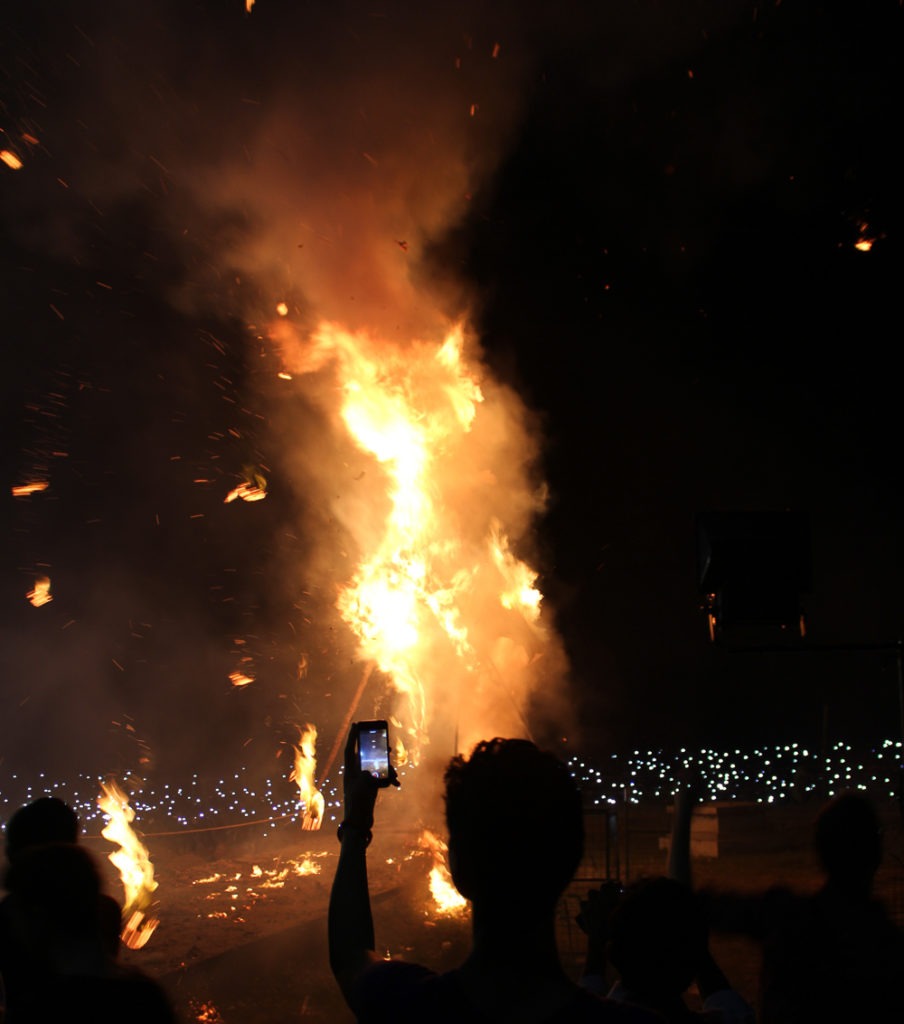 Next day, the warped iron skeleton of Pappanji stood as a memory—so last year! Walking the streets of Fort Kochi I chatted to strangers I had hugged the night before, a policeman, an older local couple, goodwill built from transgressions. I saw the remnants of other smaller domestic versions of this unique ritual. The charred remains of Santa Claus figures lay in piles of ash, a sight that would horrify the children where I come from, but here it was the sign of a liberation. In Kochi the burning of Santa was about destroying what we held onto and needed to let go of, to embrace what we needed for the new year ahead. Kochiites merged Christmas into new year, a religious festival into a secular one, and then danced on the ashes of our sensibilities. I was hooked and have returned to Fort Kochi every 31 December since.

The following year Pappanji had changed his clothes. No longer Santa Claus, but a generic old man. This was a significant change. The makers of this now 50-foot high figure came from various fields: the wooden shipbuilders of Kochi, welders from the construction industry, designers from the artist communities and local idol makers. Pappanji is an anti-idol who is destroyed. He does not represent a god or an individual, but rather a metaphor for old ideas and perspectives, the mistakes we made. The spectacular fireball and the communal celebration is sacramental in nature and offers a time for us to shift.

The ensuing years have seen the crowds grow. Last year more than 100 thousand people gathered to see Pappanji burn. Bonny Thomas, a local historian and author of Kochiites: A Look into the Intangible Heritage of Kochi is one of the organisers of the Pappanji ritual. Talking to Bonny I hear the passion in his voice. India now more than ever needs rituals which belong to everyone. Significantly Kochi and its ancient ancestor the city of Muziris, around 30km kilometres North, are among the world’s first multicultural cities. Known to Persian and Mediterranean traders, Muziris was documented in ancient maps. It is noted in the historic Synagogue of Mattancherry, next to Fort Kochi, that Jewish settlers came as exiles in the year 70 AD after the destruction of the second temple. It is highly likely that the Apostle Thomas came to Muziris. It would have been around 300 years later that a well documented Syrian Christian community was established in Muziris making it a Christian city before any European one. Arabic communities traded with the Malabar coast for centuries prior to Islam, and the first Mosque in India was also built in Muziris, around 600 AD, long before the Mogul period.  In 1341 Muziris was destroyed in a disaster possibly a flood or Tsunami. The trade port for spices, gems and peacocks moved to Kochi. On Vasco Da Gama’s second voyage from Lisbon in 1502 he reached Kochi for the first time. The violent forced conversions which ensued drove many Hindus South and some settled in Fort Kochi. The Dutch occupied Kochi from 1661 to 1795. In 1947 the British flag was lowered on Fort Kochi’s Parade ground and the Indian flag was raised. This is the same place where Pappanji now burns, as the beach has shrunk due to dredging.

Ask most Indians, North or South, to talk about their beloved country and most will talk of its success as a multicultural nation, known for tolerance and acceptance and welcoming of others. The Jews, Muslims and Christians, the Zoroastrians persecuted in Iran landed in Gujarat 1,000 years ago, the Tamils of Sri Lanka, Tibetan exiles such as the Dali Lama and more. India is a big-hearted place and much of this is due to the polytheistic, multi-faceted and broad minded philosophy of Hinduism which underpins it. News reports today are that this tolerant and welcoming society is under threat from a similar popular nationalist and divisive style of politics that has the upper hand in many countries around the world. India is one of the finest and oldest examples of multicultural, multi-faith, tolerant and inclusive societies. The world needs such examples to combat the world trend towards xenophobic nationalism. The significance of multi-community rituals such as Pappanji is becoming more pertinent.

I asked Bonny if the Portuguese colonial nature of Pappanji is in any way outdated or offensive to a postcolonial society. “Pappanji belongs to everyone”, he says. It is perhaps no accident, like many colonial-era rituals where the “Master”: is ridiculed, that Pappanji looks like an old colonial white man and that this man is destroyed. As we look at the threats our world faces and the urgent need to embrace new ideas about identity, hospitality and environmental protection, perhaps the symbolism of burning of an old white man is exactly the ritual we need now. 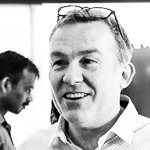 I am an artist, full time and a lecturer in visual arts part-time at Adelaide Central School of Art. I just completed a PhD, at University of South Australia looking at how portraiture operates as a socially engaged practice. The majority of the work I do is with new migrant communities: we have worked to change policy on parent visas and started Australia’s largest voluntary and free employment service for new migrants, we call it SAPNAM ( South Australian Professional Networking Association for Migrants) With my friend Harjit Singh we started Turbans and Trust, a platform which uses the Sikh turban to build trust through conversations. I am from Adelaide, but spend a few months each year in India, and am currently in Mexico working on my artwork and teaching.

All photos are by Vikas Ramdas Kochi.

Primal Casting: From the outdoor studio
Prachanda Shakya: A champion for Nepalese craft traditions
How Jewish embroidery is sustained by an Indian Muslim
Love in a time of colonisation
Saga Dawa: The blessing of the scriptures
Pistachio dog: Indian clothes tailored for the world
Curiosity and rituals of the everyday: The upcoming Indian Ocean Craft Triennia...
Vessels of love: Darug weaving that connects generations, community and country