How Jewish embroidery is sustained by an Indian Muslim 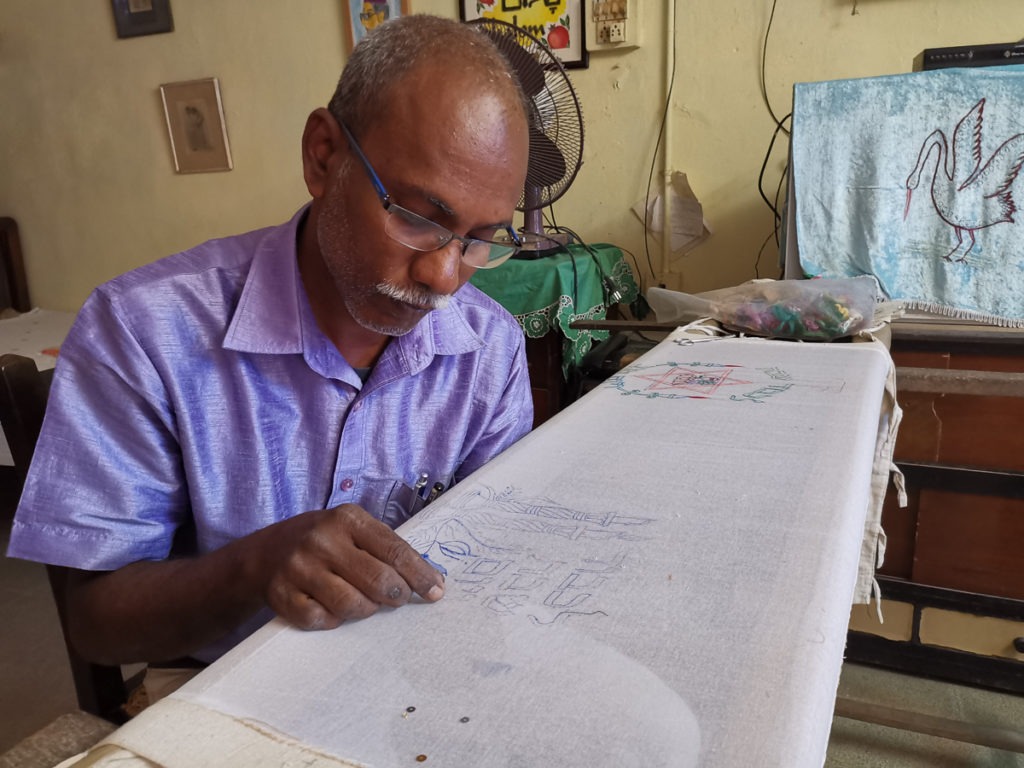 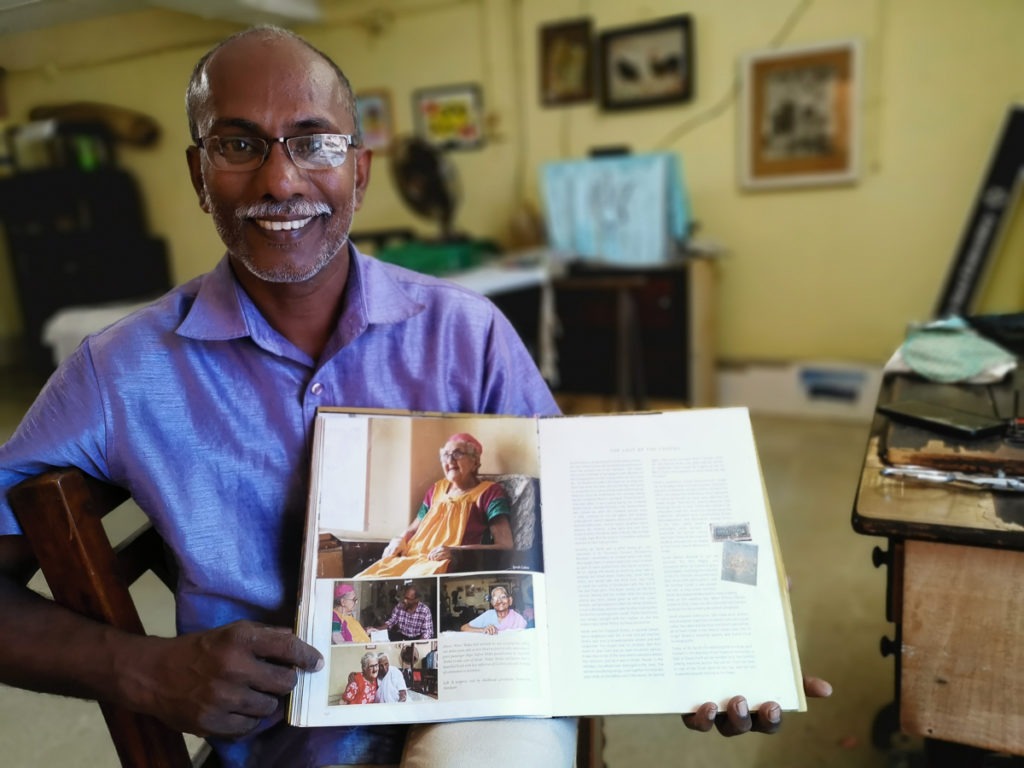 Taha Ibrahim with a book about Sarah Cohen 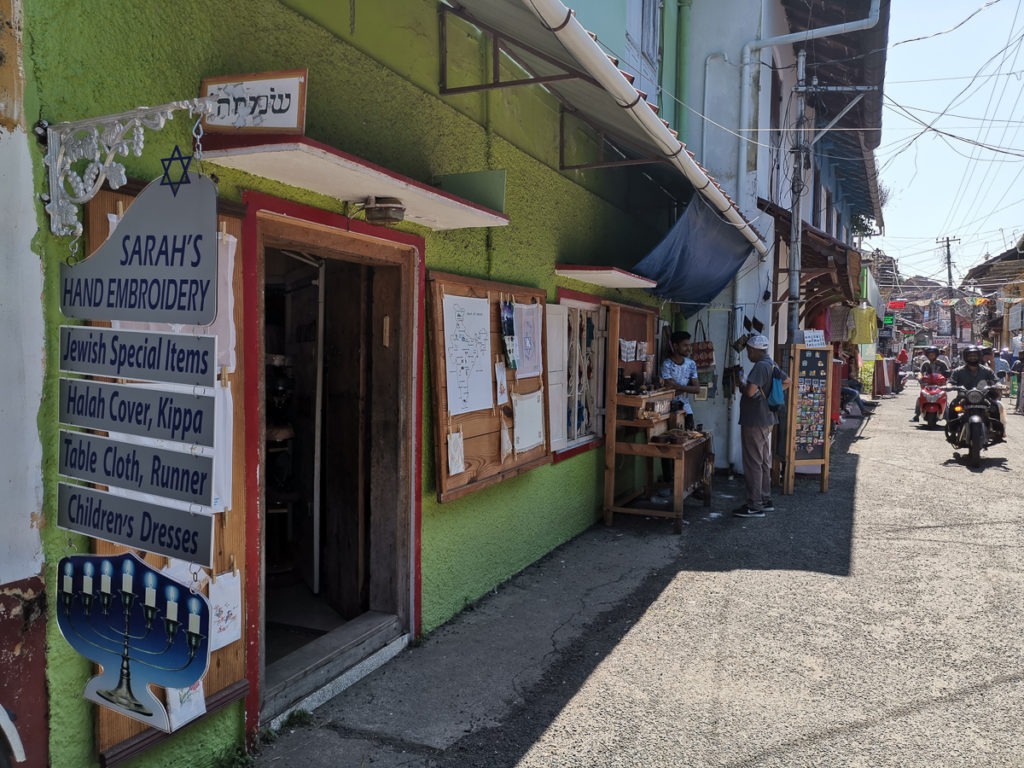 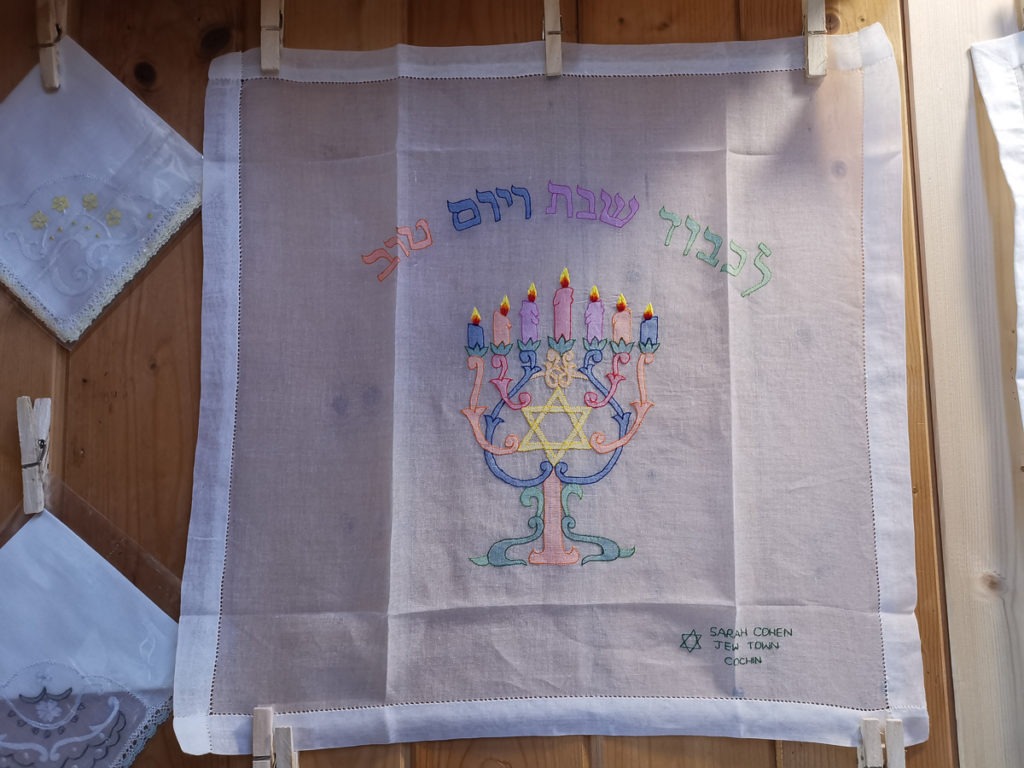 One of the embroideries at Sarah’s Embroderies 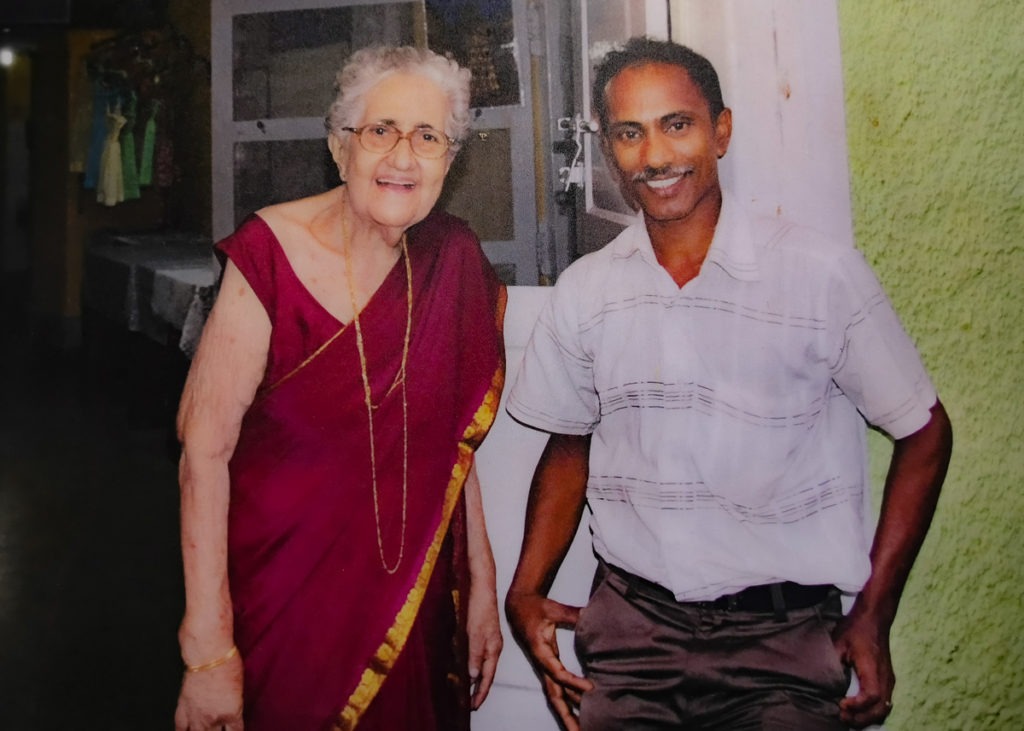 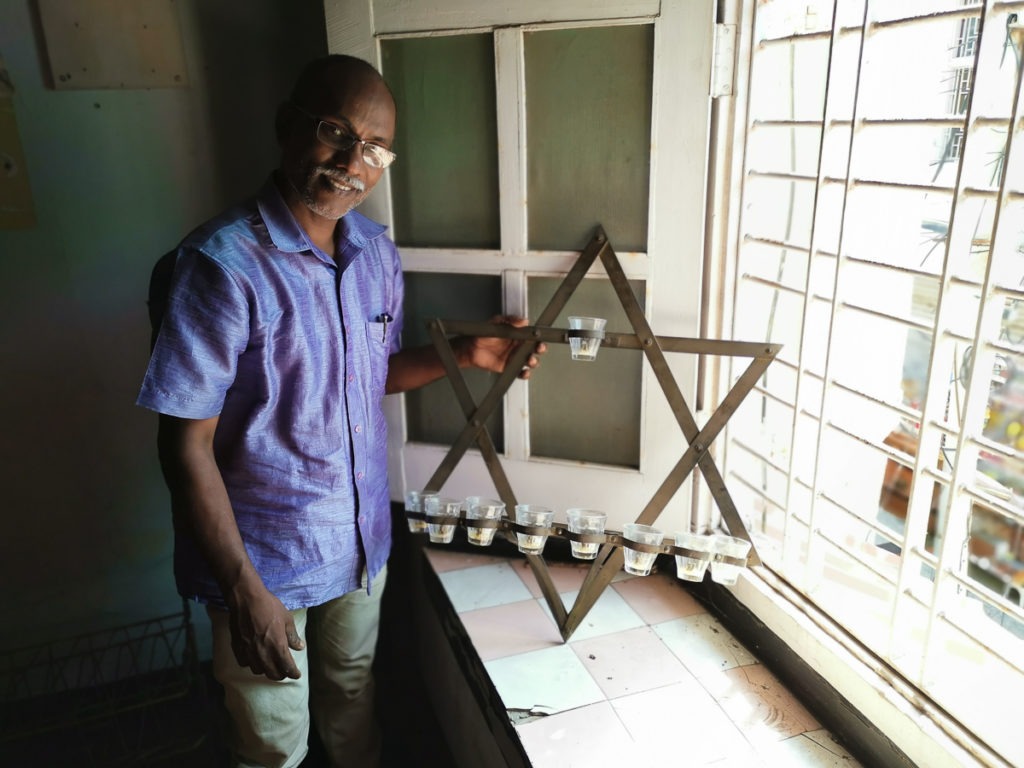 Taha Ibrahim with a minora made for the Cohen family 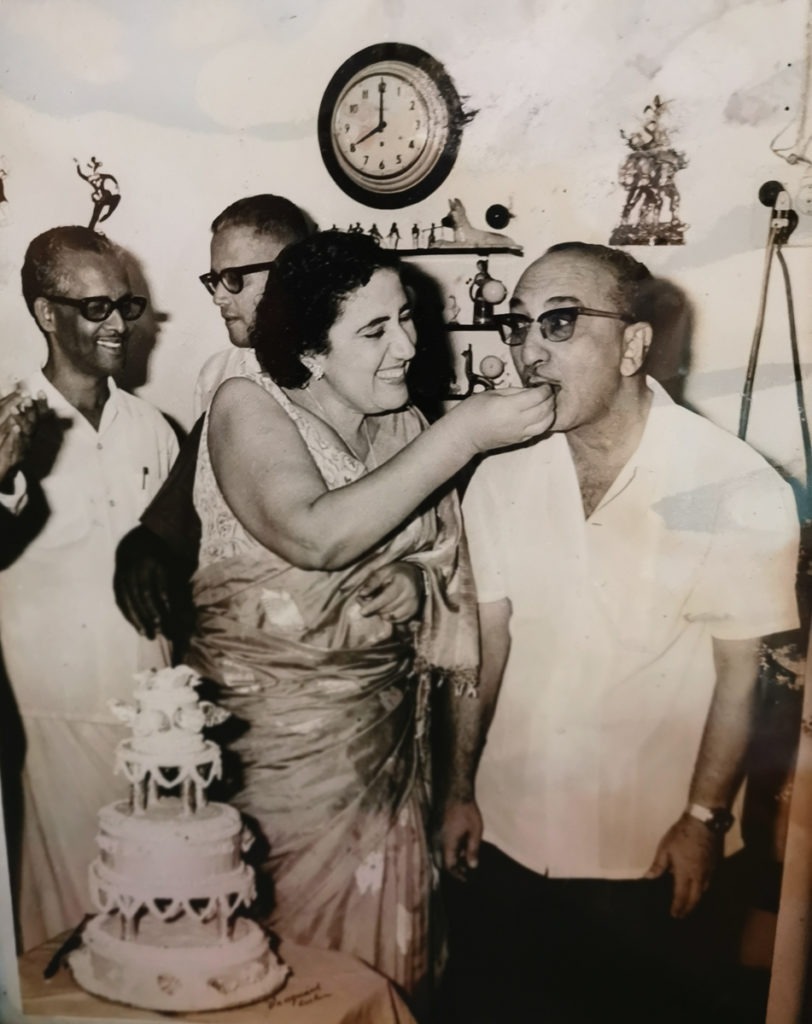 Sarah Cohen and her husband at the 25th wedding anniversary

As a key city for trade since ancient times, Kochi has evolved a diverse population. Jew Town is today a popular tourist destination, where visitors can witness a Jewish culture claims a history going back to the time of King Solomon.

A popular shop is Sarah’s Embroidery, which was established by Sarah Cohen who was the town’s oldest living Jew until her death in August 2019. She and her husband Jacob had no children, but adopted a young Muslim boy, Taha Ibrahim, who used to sell postcards outside their shop.

He now runs the shop and practices the embroidery that was learnt from Sarah. Some of the embroideries are also done in a village in Andhra Pradesh. They sell items like the kippah head covering and the afikomen that adorns matzah during Passover. It is very popular not only with Jewish tourists but also locals. 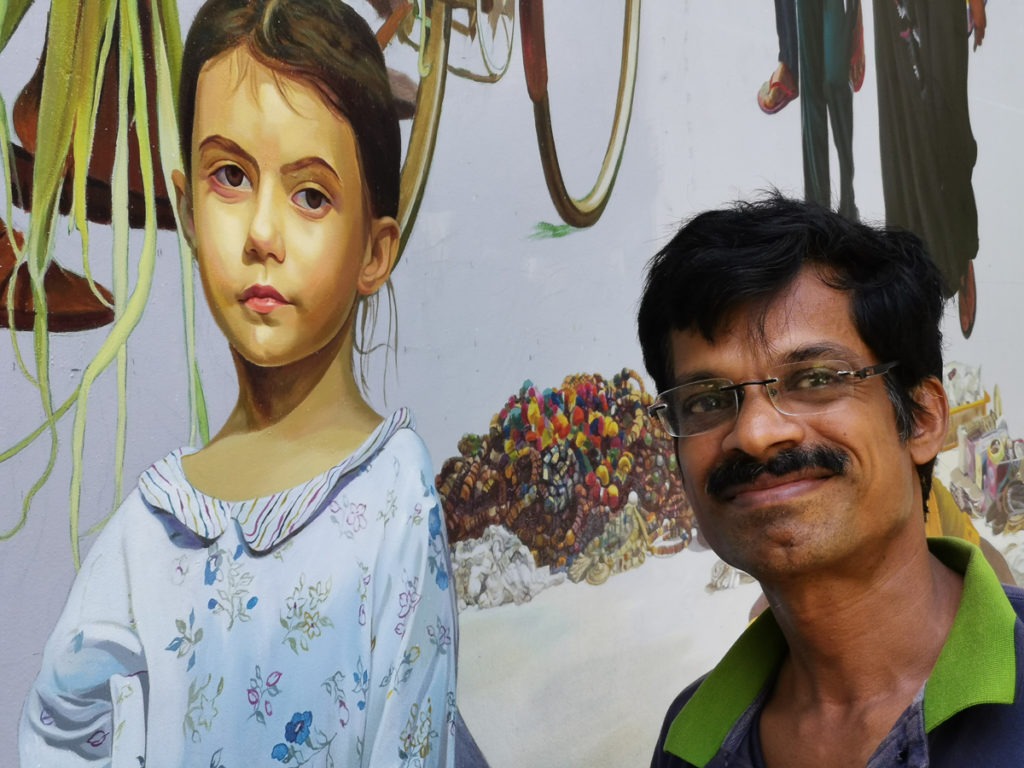 Here is an extract from the book Kochiites by local historian Bony Thomas about the history of the “White Jews”.

Sara is a White Jew. 96 yrs old, the oldest person among the Jews of Kochi. She lives in a house that is around three centuries old in Jew Town in Mattancherry on the way to the Paradesi Synagogue. The road in front of her house is just 100 meters away from the Paradesi Synagogue which is four and a half centuries old and is of historical significance. Jew Town where the Synagogue is situated is another part of history. The world knew Mattancherry, where the Jew Town is, as the spices market of the Kochi port. Hence, for Sara, even personal backgrounds are related to history. Sara’s background world extends from her courtyard, house, surroundings, Jew Town, Mattancherry, Kochi and stretches till the Middle East, the homeland of the Jews.

The King was the Protector of the Jews who used to sing in their daily prayers at home:

“O, King of Perumbadappu, We say this prayer for you, The invincible King! Lord of all fourteen worlds, We plead to you to protect our King.”

The Paradesi Synagogue is a prayer house which the White Jews dominated. When we say White Jews, the existence of Black Jews is implied. Like caste difference, there is discrimination among the Jews between White and Black Jews. However, this discrimination has no relationship with the actual tone of the skin. A White Jew need not be fair skinned or a Black Jew need not be dark skinned. The White-Black dichotomy is based on racial purity.

There are people who believe that the ancestors of White Jews are Europeans. This is wrong. For example, Sara’s ancestors were not from Europe, but from Baghdad. But people of European tradition are also there among the White Jews. At the end of the fifteenth century, European Jews came to Kochi with experiences of religious intolerance from Spain and Portugal. They also became part of the Paradesi Jews.

The term Paradesi signifies the history of Jews and their faith. Jews form a race. The racist faith underlines the fact that real Jews should be of pure Jewish blood. Pure Jews are called “Mayookasims.” Paradesi Jews take pride in the fact that they are Mayookasims. There is another side to this claim that the Jews who are not White Jews are not Mayookasims.

Because Jews form a race, the racial traditions are very important to them. The pure Jewish tradition is called ‘Yichus.’The difference between White and Black Jews is the difference of opinion about Yichus.

The Jewish nation was fragmented in history after King Solomon. It gradually became part of Assyria. The Babylon King Nebuchadnezzar made Jews slaves and took them to Babylon. A group of Jews who escaped from Babylon somehow boarded ships and reached Muziris and started living there. Many groups of Jews later came to Muziris. They spread all over Kerala. During this expansion, many Jews were born from the inter-racial mixing with the natives and the White Jews believe that those Jews are not Mayookasims.

In 1505, a German traveler, who reached Kochi along with the Portuguese Captain Dom Francisco de Almeida, wrote, “a group of foreigners lives among the idol worshippers of Kochi.” Historians think he meant the Jews. There are records to show that the Portuguese man Marti Pinheiro who reached Kochi the same year could sell the Hebrew books he brought to Kochi. It means that there were Jews in Kochi who could buy books in Hebrew. The European traveler Francois Laval de Piradour who visited Kochi in 1601 and 1611 wrote about the Jews of Kochi, “Jews are rich and enjoy religious freedom.” The Paradesi Synagogue right next to the temple where the King used to pray is a symbol of the religious freedom they enjoyed.

The Royal House bestowed a status on the leader of the Jews, Muthaliyar. The first Muthaliyar was Baruch Levy. He was also the Advisor to the King. He carried a silver embossed staff which the King gave as his status symbol. Muthaliyar had powers to intervene in cases of communal strife and issues and pass judgment on them. After Baruch Levy, his son Joseph Levy became the Muthaliyar. He played a significant role in building the Paradesi Synagogue.

In the 16th and 17th centuries when the Portuguese who swore allegiance to the Roman church and were anti-Jew ruled, the life of the Jews in Kochi was not very pleasant. The Paradesi Synagogue was partially destroyed in an attack by the Portuguese. At the end of 1662, the Dutch won the battle defeating the Portuguese. The Jews took the side of the Dutch who renovated the Paradesi Synagogue. The clock tower which is part of the Synagogue now was built by the Dutch in the 19th century in Dutch style of architecture. The tower has clocks on its four faces with Malayalam and Hebrew scripts.

The White Paradesi Jewish community made much economic gain during the Dutch rule. The Dutch maintained trade relations with the trading Jewish community. The White Jews became shareholders and agents in the Dutch trade. The presence of the Spanish and Portuguese Jews who took refuge in Kochi at the end of the 15th century must have been one of the reasons for the Dutch to have trade relations with the Paradesi Jews.

The closeness to the fair-skinned Dutch and the presence of the European Jews made the Kochiites call the Paradesi Jews as White Jews.

Ezekiel Rahabi was a prime model of the economic progress the White Jews made in the time of the Dutch who honoured him with the title of Joodsche Koopman His bungalow in Mattancherry was close to the King’s palace. He was the owner of a fleet of ships that reached the ports in many parts of the world with the produce of Kerala. He was a middleman for the Dutch who linked the Dutch trade relations with the Kings of Kerala. When enemies moved against the King of Kochi, Rahabi’s men and ships supported him. When the King was financially in dire streets, he used to take loans from Rahabi, as per old Jewish legends. Even when the British took Kochi over from the Dutch, Rahabi continued to be the most prominent trader.

The Paradesi White Jews with family names like Rahabi, Rottenberg, Abrahams, Sargan, Cohen etc were at the forefront of the social life of Kochi through trade and economic prosperity. Sara belongs to the Cohen family-Sara Cohen.

Many ask Sara, “Why didn’t you immigrate to Israel?” Sara’s standard reply—“Why should I? This is where my ancestors lived. This is my country.”

On the way to the Paradesi Synagogue, Sara runs an embroidery shop. Visitors to the Synagogue visit her shop too. She is a widow. No children. She is single. But, Kochi does not isolate Sara. She has a helper whom she treats as a son-a Muslim young man named Thaha. Thaha was introduced to her when he was 15. Thaha is always with her with any kind of help and love in her old age. Even when the Israel-Palestine issue sets aflame the world, even when all over the world the Jews and Muslims grow emotionally distant from each other, even when in Kochi the Jews are divided into White and Black Jews, the nobility of the relationship between Sara and Thaha is understood by Kochiites as a magnificent symbol of the Kochi culture.

You can listen to an interview with Bony Thomas here. 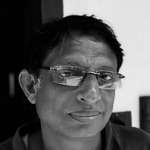 Bony Thomas was born in Ponnarimangalam in Ponjikkara, Ernakulam. He was an illustrator and cartoonist for Business, Standard and Economic Times. He is a short story writer in Malayalam and one of the founding trustees of the Kochi Biennale Foundation. His book is Kochiites: A Look into the Intangible Heritage of Kochi. (Translated by Ravi Shanker. Pranatha).

Embroideries with love from Mauritius
The forest on my flesh
Finding the spirit of clay in Rajasthan
Sky's the limit: The Cultural Textiles Rug Project
The robot embroiderer
When nomads come to town: Sustaining weaving traditions on the Ladakhi Changtha...
The rules of the game: Weaving Durries in Rajasthan
KUTCH: a visual identity for a radiant people