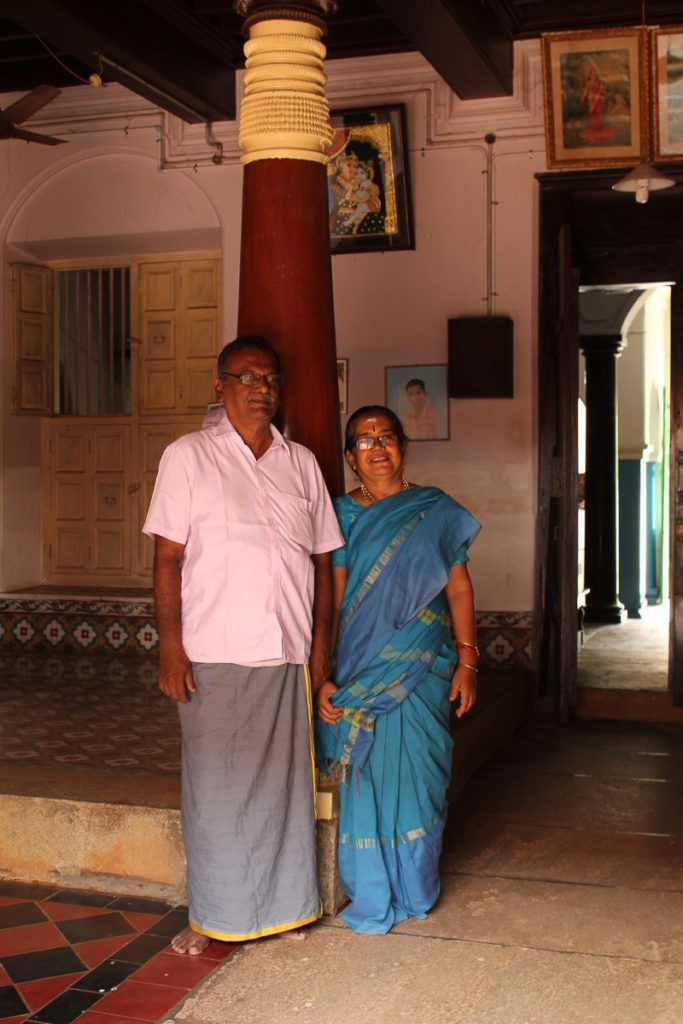 On turning 60 years of age, it is a Chettinad custom to have a second wedding.

“A man’s Self is the sum total of all that he can call his, not only his body and his psychic powers, but his clothes and his house.” William James (The Principles of Psychology, 1890)

Mitraja Bais remembers her discovery of the lost work of Chettinads and the poignant tale of loved objects left in their wake.

I happened to chance on Chettiar material culture in September 2007. It was during my 16 week architecture internship in Auroville, Tamil Nadu. It was also the first time I had stepped 2000 km away from home (Gujarat) to live on my own. We (a group of five architecture interns) were assigned a field visit to Chettinad region to document Attangudi tile making and to track down Master Craftsmen skilled in Chettinad plaster technique, a building craft technique that was steadily depleting due to a steep drop in the number of artisans practicing the craft. I was absolutely oblivious to Chettinad’s existence up until a few days before our visit. Back then, there was no Google search to conduct pre-field investigation, or smartphones to navigate us to a handful of villages whose names I couldn’t even pronounce as I didn’t speak the local language. Communicating with locals was possible only in Tamil and our two Tamil speaking friends doubled up as translators for the rest of us throughout the visit.

The five day field visit yielded good results for us. We visited a few tile making units and documented the process of Attangudi tile making. We were also able to locate two craftsmen working with the Chettinad plaster technique at a restoration site. They were happy to engage in a conversation and informed us that the Master Craftsman they were working with was nearly 70 years old. We were not able to meet him as he was away but the craftsmen explained to us the process of Chettinad plaster technique. The purpose of these crafts was as interesting as their process. However, what struck me the most were the enormous mansions where these crafts were employed and the patrons who enabled them to flourish – Chettinad mansions of Nattukottai Chettiars, a South Indian merchant community from Tamil Nadu. Mansions, constructed in late 19th and early 20th century using imported building materials and furnished with valuable artefacts. Mansions that were a symbol of the community’s rising wealth and power. Mansions that once bustled with nearly a hundred residents on an everyday basis. Mansions that now lay silent in villages that appear to be in a deep slumber, some abandoned, others partially occupied and a handful being restored to their former glory. Mansions that are carefully dismantled so that their contents can fetch a good price in the antique markets. The mansions left a lasting impression on me and filled me with questions about people’s possessions and their inheritance.

If we come to think of William James’ quote, our relationship to the things we own goes far beyond utility and aesthetics. Ownership creates attachment and often our most valued possessions become extensions of the self. These could be a dried leaf collected on a walk in the mountains that now rests between pages of a treasured book; a souvenir carefully chosen on a recent trip abroad; a gift that is now a memory of a cherished occasion as well as of the person who presented it; an heirloom artefact that carries within itself stories of a family’s past; or even a magnanimous ancestral home that once carried some or all of these objects and more. It is almost as if a part of us resides in these objects. However, not all objects can stand the test of time. We may part ways with many valued objects within a lifetime whereas others continue to exist long after we’re gone, and become our legacy. What makes objects valuable enough to be inherited? And what happens when one person’s legacy becomes another person’s encumbrance? How do they choose between holding on and letting go? How does time impact valuable objects that surpass the lifecycle of their owners?

Let’s delve into the story of Nattukottai Chettiars and explore the current state of their material culture, decades after they were passed on as legacies…

Continue Mitraja’s journey into the culture of Chettiars in our Quarterly Essay. This is available to our beloved subscribers.

Quarterly essay - The world in a chai cup: Sandra Bowkett and a village of India...
The Shadow Theatre of Anaphoria Island
Barbara Mullan: A life with Gujarati textiles
Collective support for architectural heritage: The workcamp movement in Liang vi...
Shaping the divine in the lanes of Kumartuli
The angels of Dhadhampatti
With the blessing of Gods and families: A Mauritian Tamil wedding
Looking in looking out: Yogic practice and public art in Western Australia