To catch a flower: Love triumphs in the marriage of Sang Thong 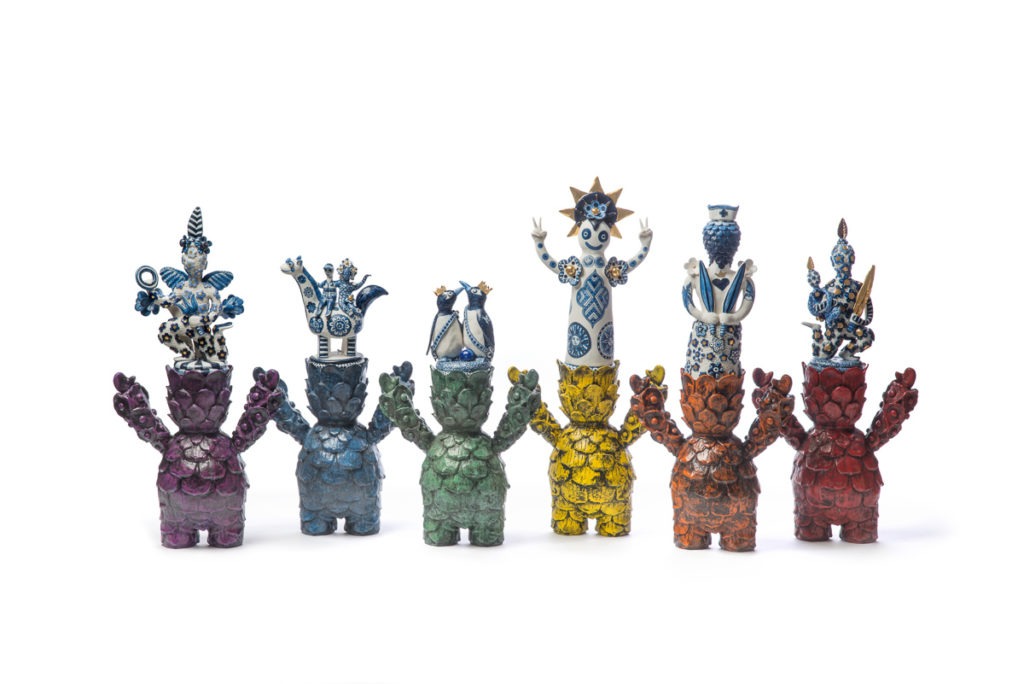 Vipoo Srivilasa invokes the romantic tale of Sang Thong to celebrate a love that breaks through social barriers and Edward Colless heralds his “animated, capricious sprites and bristling bouquets”.

The Thai folktale Marriage of Sang Thong involves forbidden love. To cut an elaborate tale short, Prince Sang Thong was born in a conch shell to the major wife of a king. The “minor” wife ordered them to be banished. Sang Thong eventually made his way in the world wearing an ugly mask as a disguise. He came across a king who invited the sons to undergo tests to prove themselves for his seven daughters. The youngest daughter Rojana could see through the mask and chose Sang Thong by throwing him a garland. Sang Thorn used magic to pass many tests and eventually revealed himself to the king and married Rojana.

This story resonated with Vipoo Srivalasa, who had recently been inspired by the legalisation of same-sex marriage in Australia to marry his partner of 20 years. He used the Thai folktale of forbidden love to tell his story to a Thai audience. According to Vipoo, “Flowers and garlands symbolising relationship become a recurring element. Mirroring this situation, communities of LGBTQ in Australia and other countries have to fight for social acceptance. Thus this is a celebration of love, a declaration of victory and joyous expression of ardour.”

Vipoo’s artistic projects are multi-faceted. The Marriage of Sang Thong not only includes objects made by Vipoo, but also a crowd-sourced installation and even afternoon tea. 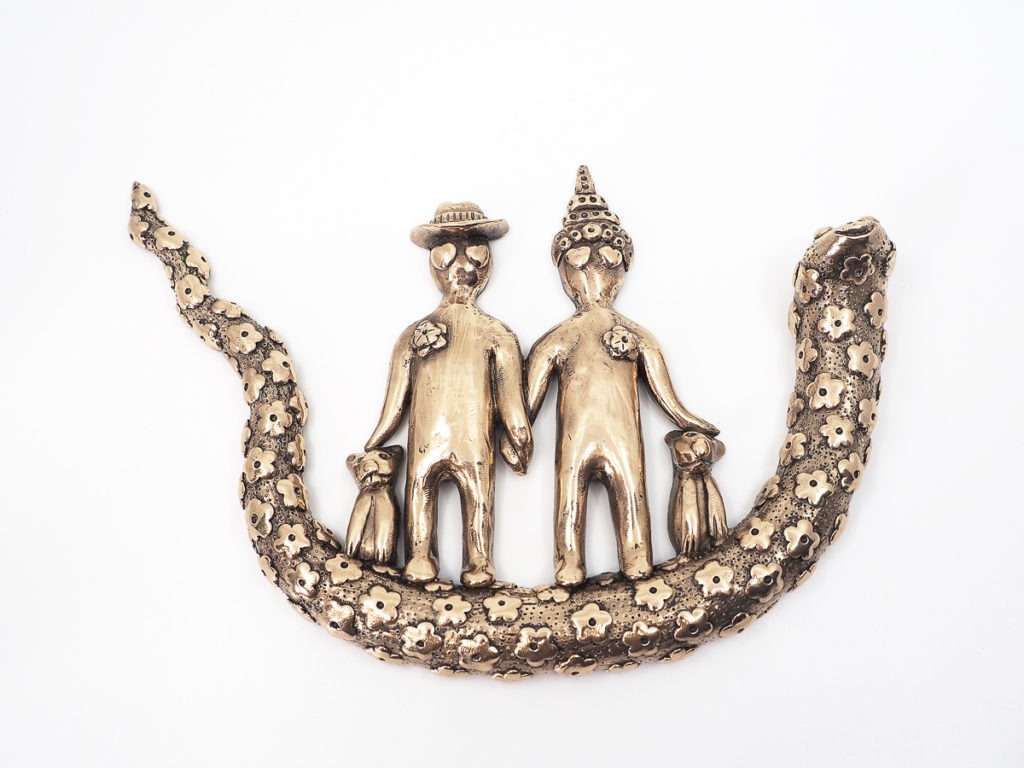 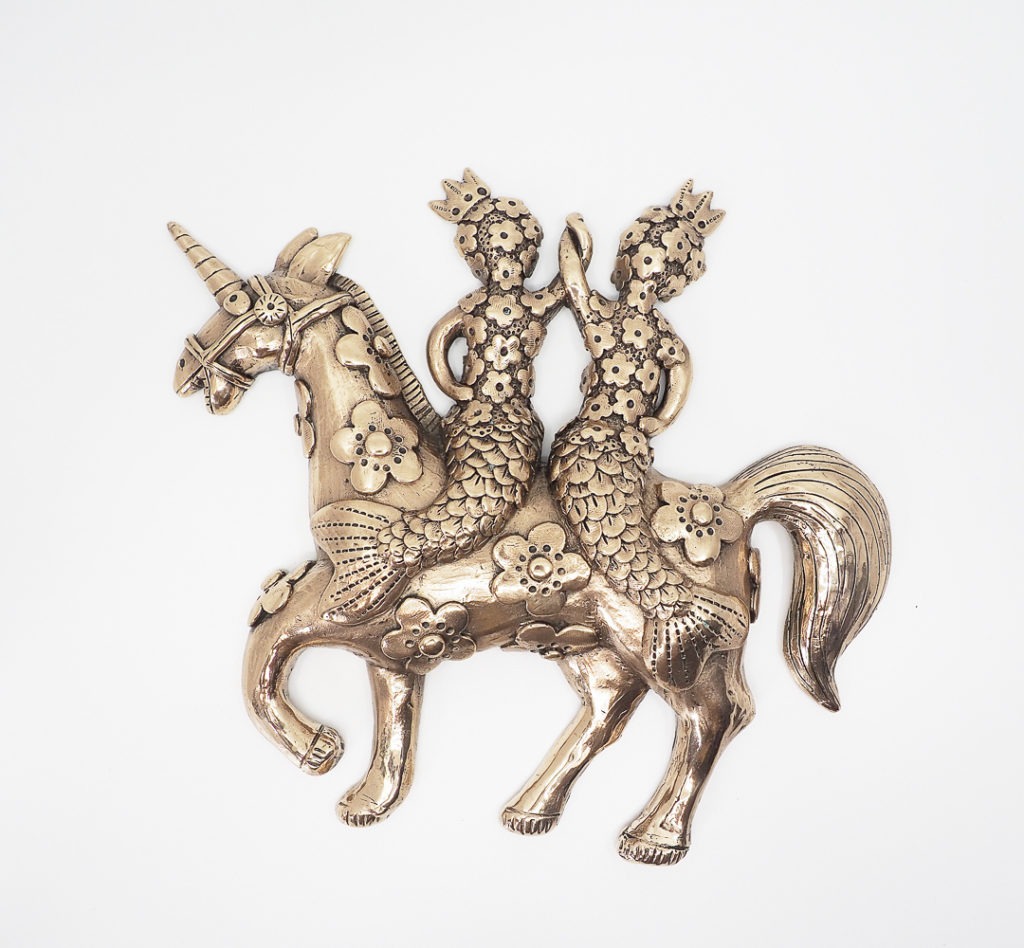 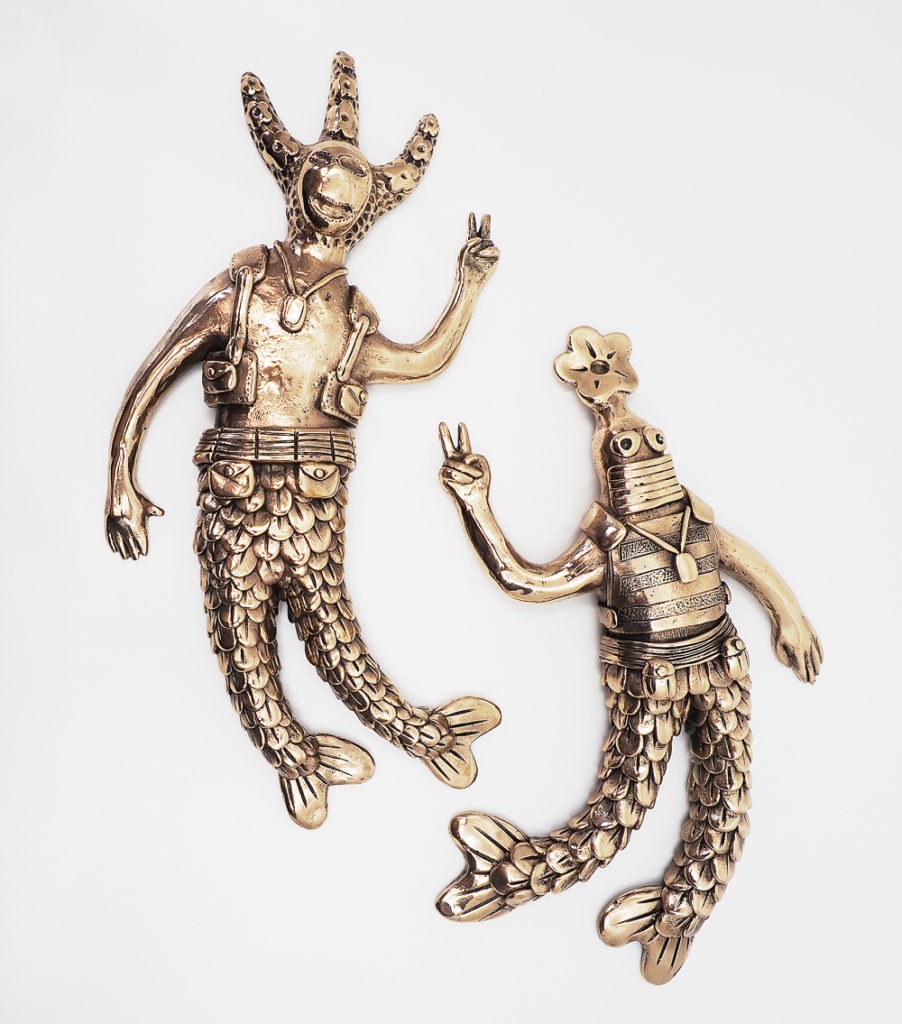 The pieces with the mixture of bronze and ceramic refer to antique European ceramic flowers with bronze stems and leaves. “For me, bronze, a robust and permanent medium, symbolises the strong concept of marriage and a solid commitment.” The installation aligns these figures along a long table which for Vipoo evokes the famous Sydney Mardi Gras parade.

The bronze bas reliefs individually convey ten important incidents of same-sex marriage movements such as Stonewall incident—when a group of gay community created gay rights awareness in New York in 1969, and “Yes” campaign of Australia in 2017. The artist also showcases a movement that emerged within Thailand in the work called “1956”, and a follow-up that hopes to bring same-sex marriage to the country in “2020”. All the works are delicately crafted into numerous characters from Sang Thong. 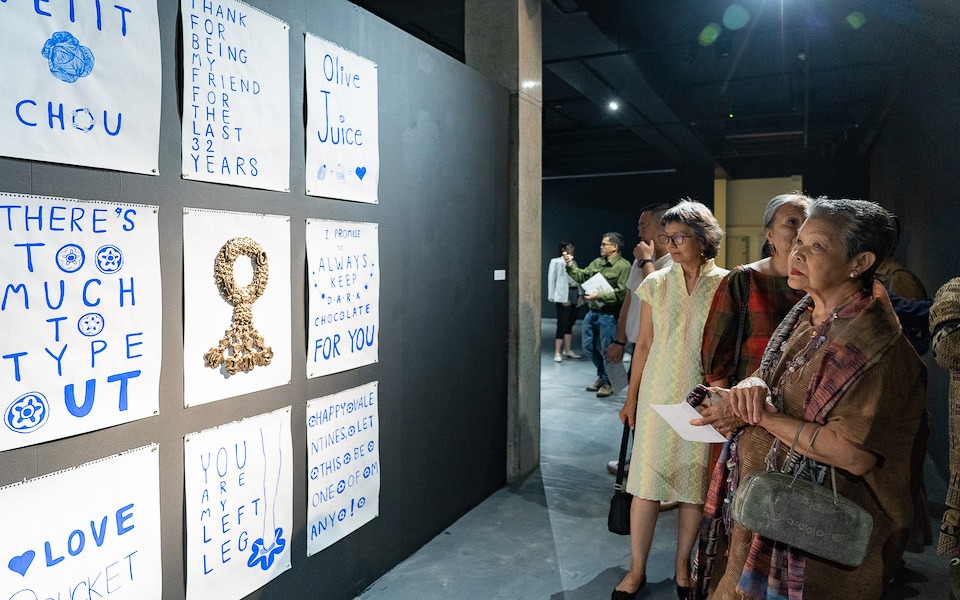 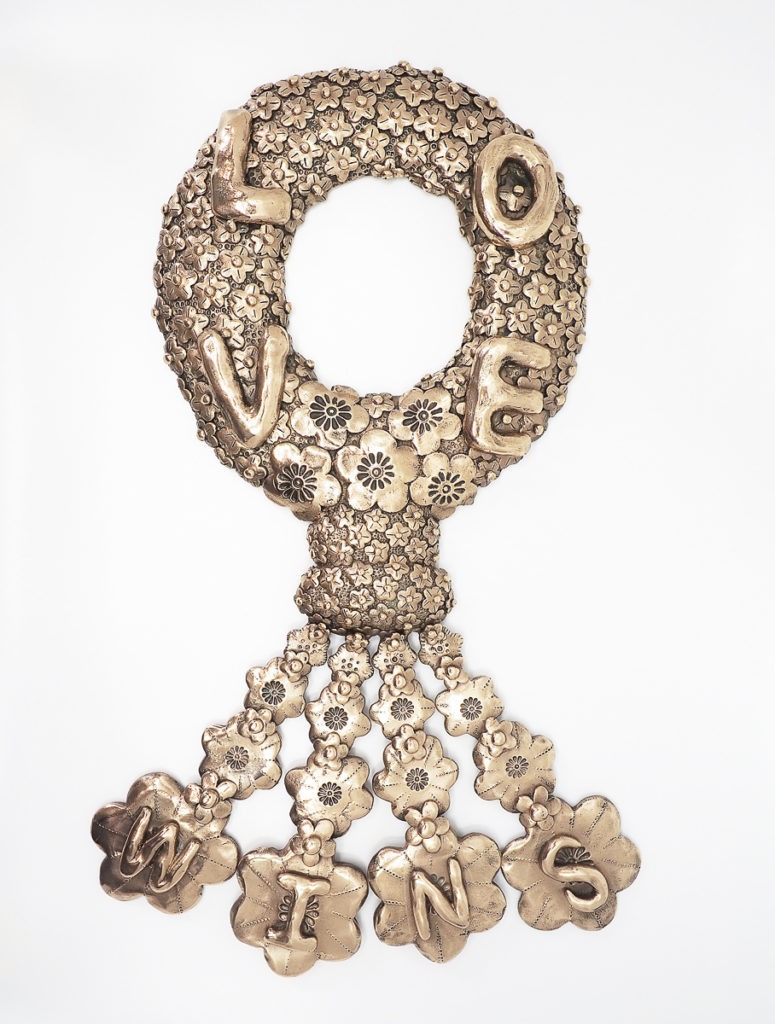 In preparation for the exhibition, Vipoo posted a question through his social media: “How do you express your love?” He was quite overwhelmed with the response. Some were quite idiosyncratic, such as “Olive juice” or “Your cape is showing”. He used the answers to create wall works, deliberately leaving out whether they come from straight couples, gay or mixed. As Vipoo states, “Love is love”. 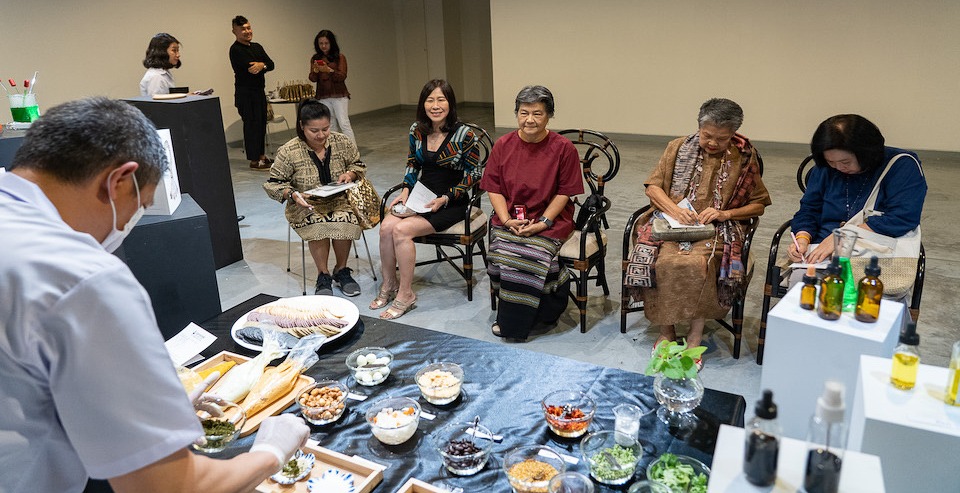 Vipoo often combines his work with food, famously cooking meals to accompany his exhibition Taste-Touch-Tell at Sydney’s Gallery4A. To develop the culinary dimension of this Thai show, he worked with the world’s first eating designer, the Dutch artist Marije Vogelzang.

For the Taste of Love (Rod Rak) project, participants described their love as particular tastes.

“It’s about one’s identity and energy of yin and yang, femininity and masculinity. Love can be sweet, spicy or whichever characteristics of the ideal partner that one chooses. Once selected, the choices translate into ingredients of toppings on crackers.”

Initially, Vipoo collaborated with Rosewood Bangkok to create an afternoon tea. In the second phase, participants were invited to complete a short questionnaire about the taste of their ideal love. According to Vipoo,

“I used different kinds of crackers as the base because I feel like people have different energy. Though you are a woman, you can have a male energy, not that you’re a tomboy or you’re gay. The second layer was identifying the one you love: same-sex was depicted by eggs because a hen doesn’t need a rooster to lay an egg. The opposite sex was depicted by an avocado because the fruit can change its sex, one day male and the next day female. Any sex was a capsicum because the tree has both male and female vegetables.” 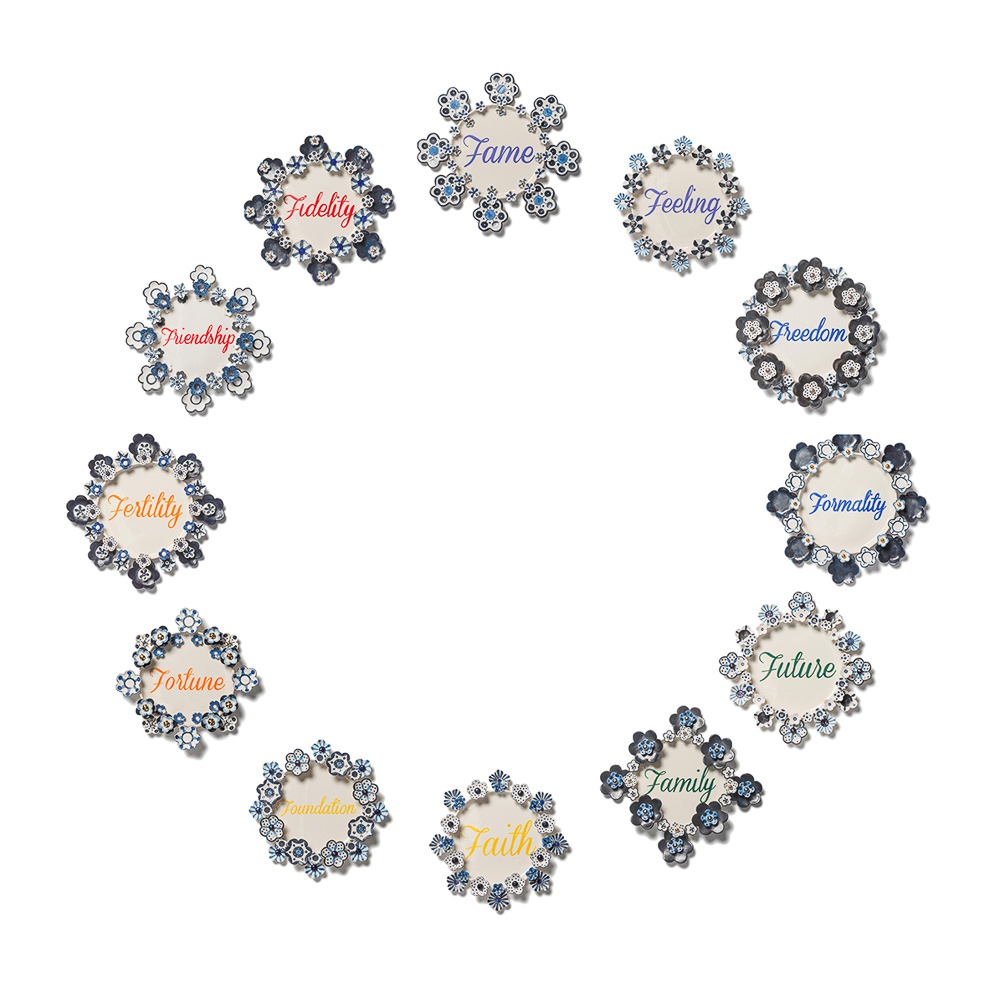 Thai culture has a strong tradition of adornment, particularly in uses of the garland as an offering. Vipoo works with this tradition to expand the social franchise of love to accommodate same-sex couples. His work is like Rojana’s garland, capturing our affections.

They stand with an impish pride, their legs spread and planted, with arms upraised in a jubilant victory signal as if—despite their less than athletic figures— having just landed a heroic somersault. They hold aloft magical trophies like fairytale champions, thrilled by their own unexpected entrance at an award ceremony. They can also perch on pedestals with the grace of heroes or idols. And they hop and stretch and pivot in the way that self-conscious children do when jockeyed into a photo opportunity. Even in moments of modesty they glow, radiating a joy that is infectiously conveyed through the shimmer of feathers and rippling fur, or in the flicker and glint of their shiny scales and armour—whatever these bewitching costumes are that they might be wearing. Above all, they bloom and blossom. Floral blushes and insignia irrepressibly burst out and swarm over bodies, spiralling like banners or spelling out celebratory words across votive plaques.

Vipoo Srivilasa has invented a magical and bustling ceramic menagerie of hybrid creatures—part human, part deity and demon and robot, part animal and vegetable and mineral, part toy, ornament and trinket—that are as elusive in description as they are stamped definitively with his own buoyant, fertile artistic personality. We might be tempted with good reason to associate Srivilasa with other Pop-inspired contemporary artists who have styled their signature work around similar sentiments for decorative, fantasy creatures: the US artist Jeff Koons and designer Kaws (Brian Donelly), for instance, or the Japanese maestro of “Superflat”, Takashi Murakami. However, the differences are as strong as any similarities. Compared to Srivilasa’s beguiling zoo, Jeff Koons’ monumental flowering puppies and balloon bunnies are emotionally glib. Kaws’ poignant clown-like adaptations of Mickey Mouse or SpongeBob are forlornly isolated and melancholic. And Murakami’s psychedelic pandas and smiley-face flowers are raucous and ravenous.

Srivilasa’s world of animated, capricious sprites and bristling bouquets is perhaps closer to that of Ghibli Studio genius Hayao Miyazaki, whose movies so often picture an alternate reality in a primeval or enchanted forest that harbours fairies and goblins, cast out like refugees from modern technological and capitalist society. But then, although they forge their own mythology, Srivilasa’s figurines don’t really have a natural environment that they call their own. They are emigrés of a sort and whether prancing like mischievous gremlins looking for a machine to play with or like a child’s special adopted doll or a household god looking for a home, they manifest in isolated spaces to seek as well as give affection. We might call them protective talismans, protecting us—by their sheer gleefulness—against adversity.

Emigrés between worlds and also between cultures, Srivilasa’s ceramics patch together and infuse motifs and crafting skills from his native Thai culture with his adopted Australian milieu; just as spiritual or folklore emblems morph into secular decoration and traditional iconography is wittily merged with high camp contemporary signage of emoticons and kawaii (cute) tokens. A cartoon solid glass rabbit, transparent as a phantom, sprouts extra ears to resemble the spooky Australian Aboriginal cloud spirit called Wandjina. Australian fauna (kangaroos, for instance) are bedecked with water hyacinth flowers, like the goddess Mahothorn Devi; they pose in gestures from Thai classical dance, or stand or squat like the Thai tutelary figure of Nang Kwak (the beckoning lady, appealing for good fortune) with a resonance of the Maneki-neko (the Japanese beckoning cat). The famous kanok motif (the licking flame and vine shapes at the core of so much Thai decorative pattern) is glimpsed in flirtatious and fleeting details, turning into petals and leaves or fins.

Srivilasa’s technical skills with porcelain also demonstrate his dexterous delight in hopping between cultures, and his wry cultural politics. We might associate his characteristic use of white and blue (from cobalt oxide) with early modern European porcelain. This white and blue palette is particularly a feature of the hand-painted flowery patterns and picturesque scenes of seventeenth and eighteenth-century Delftware plates, vases and tiles from the Netherlands. Also, the frolicsome stances and the decorative flourishes of ormolu on his figurines conjure up Meissen ceramic figures from eighteenth-century Germany. Of course, when these European techniques and styles were imported from China they were enveloped in allusions to Chinese culture, politics and society, even if the decorative manner dubbed as Chinoiserie. But, ironically, both Dutch and German pottery factories struggled to reproduce the cold fragile whiteness of Chinese porcelain material. Delftware is actually earthenware with a white glaze, heavier and more earthy than its Chinese prototype.

Srivilasa playfully complicates this genealogy. He uses an Australian porcelain clay which doesn’t require glazing—capturing the eggshell surface the Europeans for centuries couldn’t achieve—and then paints on the cobalt oxide patterns which, because they are applied directly onto the white porcelain (rather than under a white glaze) keep a lively, spontaneous and candid trace of the brush. There’s little evidence of a stencil or stamp in Srivilasa’s method, with each work painstakingly, individually hand-fashioned despite the factory scale of his output. Indeed, Srivilasa began his art training in Thailand as a painter, and he has really not given up this discipline or its inspiration—perhaps translating the artisanal, hand-drawn tradition of Lai Thai, the pattern-making national heritage of Thailand, into his global Pop idiom. In a giddy spiral, he diverts the porcelain tradition from Europe back to its Asian source but via Australia and Thailand. Along that trade route, Srivilasa deftly gathers up the themes that sparkle and glow from these works, and which he also energetically endorses in an activism manifesting in artistic collaborations, welfare fundraising and relational projects: an urgent concern for the environment, a celebration of social equality, and an embrace of cultural difference. It’s this versatility in idiom and content as well as his unerring craft that have placed Vipoo Srivilasa as one of Australia’s most well-known, respected and admired ceramic artists.