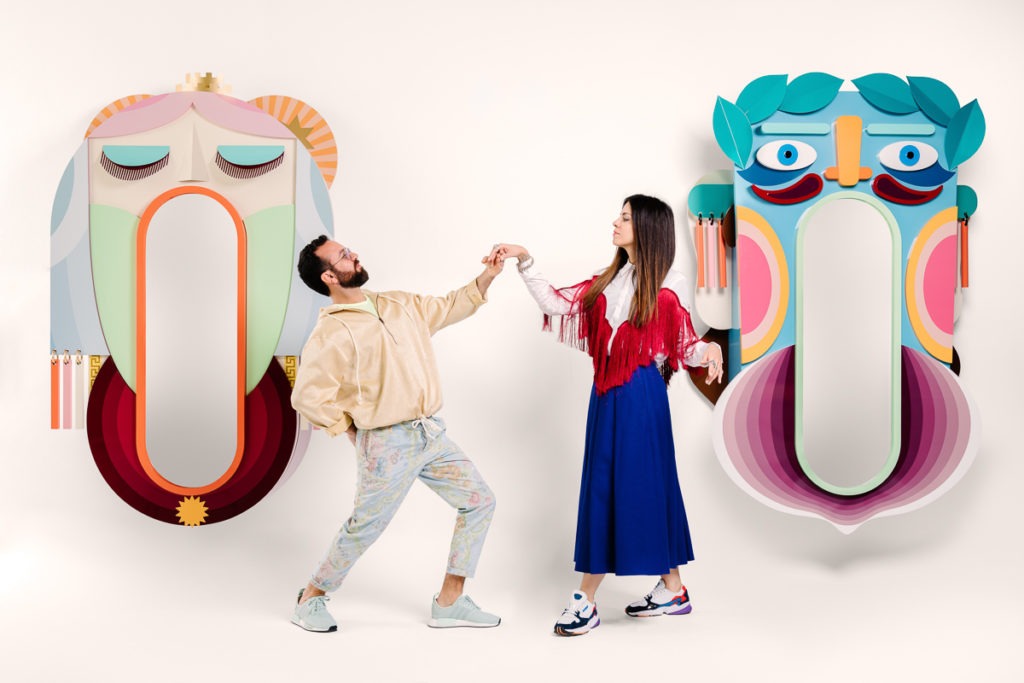 Mata is a Junoesque woman of Zancle, today’s Messina (Sicily). She is courted and then conquered by the grim Saracen warrior with a moustache, Grifone. We ask Antonio Aricò about the story behind this project.

✿ Where did the idea for this work originate?

Mata & Grifo is a folkloristic story from the Stretto di Messina where I grew up, surrounded by myths and legends. Teaming up with Elena Salmistraro and the brand altreforme, I drew on the poetry from a poem from my childhood and transformed it into a product that entertained Rossana Orlandi’s guests during Milano Design Week. I designed Mata the female giant cabinet, while the male, Grifo, was designed by my friend Elena.

✿ One what did you base your version of Mata?

Mata is a Junoesque woman of Zancle, today’s Messina (Sicily). She is courted and then conquered by the grim Saracen warrior with a moustache: Grifone.

This story of love between the two giants from Southern Italy is mirrored in my friendship Elena Salmistraro. Our story has been created for the stage by Valentina Fontana Castiglioni and her altreforme brand at the Rossana Orlandi Gallery.

✿ Can you say something about the process of making these pieces (where, by whom, etc)?

Elena and Valentina and I present a love story which is embedded in folklore and embroidered with the poetry of the Mediterranean. It is imbued with a very refreshing view of technological creativity with no limits: in particular that of altreforme’s aluminium manufacture.

✿ Do you have a new series coming up that we can alert readers to?

Yes, I am preparing a new story/collection that will be narrated from a mysterious place during next Milan Design Week!

Here is a trailer for a documentary about Antonio Aricò and the world behind his handmade design.

Antonio Aricò is an Italian artist, designer and creative director. After earning a double degree at Milan Polytechnic he obtained his master’s degree with a work based on the themes of Design & Tradition, combining the fields of art, craft and design. These theories merged with the poetic of contemporary culture, make up Aricò’s inter-disciplinary practice today. He is known as the forerunner of a unique approach that parallels crafts and self-production with industrial design.

Prachanda Shakya: A champion for Nepalese craft traditions
The Shadow Theatre of Anaphoria Island
Never on Tuesdays: How the Padma Saliyar weave auspiciousness into wedding saris
Assegai: A spear of light across the Indian Ocean
The rules of the game: Weaving Durries in Rajasthan
Fresco comes to the mountain
Many stitches in time: the work of Annabelle Collett
Letting go design in Dharavi