Jenni Kemarre Martiniello’s pieces demonstrate a duality of Indigenous and glass cultures, traditional and contemporary ideologies of strength and fragility, which encompass the warp and weft of time. Of Arrernte (Australian Central Desert), Chinese and Anglo-Celtic descent, Martiniello embraces 60,000 years of Indigenous Australian culture through her identity and the medium of glass. In using glass, a non-traditional medium adapted from centuries-old techniques, to make traditional Indigenous forms, Martiniello explores the relationships between cultures and filters them through her personal relationship to the land.

The European settlement of Australia 230 years ago disrupted Indigenous peoples, their languages, ceremonies and traditional laws, while imposing state and federal control and intervention. Through resistance and resilience, including demands for the recognition of their rights and the reclamation of Indigenous culture,1.Pat Dudgeon and Roz Walker, “Decolonising Australian Psychology: Discourses, Strategies, and Practice,” Journal of Social and Political Psychology 3, no. 1 (2015): 276–297. Indigenous people are trying to reverse this colonisation. Martiniello recalls seeing Indigenous woven “artifacts” in a museum as a child as if “they were relics from a dead past of extinct cultural practices”2.2 Interview with the artist, May 2, 2018. despite knowing that they were part of living practices. Here a seed was planted for her future artworks. Australia’s colonisation introduced new materials to Indigenous peoples which opened new avenues for creativity. One of these new materials was glass.

Humans have made glass objects since at least the third millennium BCE, but it was in the Roman Empire—particularly on the small island of Murano, near Venice—that glass artisans developed many of the techniques that are used today. Glassmakers have also demonstrated their resilience in continuing their traditions despite unstable political climates and wars. In the late 1700s, under the leadership of Napoleon Bonaparte, French troops occupied Venice, which resulted in the abolition of Venetian guilds, including the glassmakers’ guild. Over the next few decades, many Muranese glass masters emigrated and myriad secrets and techniques were lost. By 1820 there were only sixteen glass furnaces left, with only five producing glass products. In the midst of this adversity, the dedication of glassmakers kept the medium alive.

Even today, many glass factories are family businesses in which the knowledge and skills are passed down through the generations. Although spanning a shorter timeline, the glassmakers’ experiences relate to the knots, loops, stitches and twists of Indigenous weaving methods, which are also passed down from generation to generation. Indigenous traditional woven objects hold millennia of skills, traditions and knowledge that support Indigenous cultural identity. These objects were, and still are, featured in everyday life as food containers and ceremonial objects. Similarly, glass features in everyday life today for both food and ceremonial use, whether it is a jar of peanut butter or the clinking of glasses for a celebratory “cheers.”

Martiniello melds the languages of glass and traditional woven objects to create her own twist on the two art forms. She uses glass to emulate the looping stitches, coils and long weaves of woven vessels such as dilly bags. Dilly bags are used to collect bush foods and medicine. When used in ceremony, dilly bags have varied decorations, such as the type of weave, the placement of feathers and the presence or absence of tassels. Each of these modifications has spiritual meaning and is specific to one clan, or a group of clans that share ceremonial privileges.3.Maningrida Arts and Culture, “About weaving,” https://maningrida.com/artworks/weavings/about-weaving/, accessed August 13, 2018. Martiniello chooses not to make any specific clan weaves, as these are protected under copyright, intellectual property and communal property rights laws. More importantly for the weavers, they are also subject to traditional Aboriginal law. Only those who “belong” to specific designs through their connection to country, clan or family can use those decorations and Martiniello respects these laws. Unlike paint, glass colors do not mix and blend, and the glass technique known as caneworking is used to form intricate weaving-like patterns. Coloured glass can be twisted, stretched and pulled, and after cooling, can be bundled, stretched and pulled again. This method allows for an infinite combination of colors and patterns that are used to create a final blown glass object that appears woven.

Glass is just one of Martiniello’s creative outlets. Her journey encompasses many media such as sculpture, photography, screen printing, printmaking, textiles and poetry. In 2007, Canberra Glassworks was founded as a centre for glass artists. As it was being built, Martiniello drove by frequently to watch its progress, longingly waiting for it to be complete. As soon as it opened, she took beginner courses and was immediately enamoured with the possibilities glass could offer her artistic conversations. Because the craft of glassblowing takes many years of dedication and practice to successfully create a vision, Martiniello engages a team of glassmakers to assist in the creation of her pieces. This is the nature of glassblowing: it requires a collective. Martiniello articulates, “you can’t really expect to do it on your own—you just don’t have enough hands.”4. Interview with the artist, 2 May 2018. Martiniello’s team consists of both professional and early-career glassmakers. This parallels Indigenous weaving circles where knowledge is passed down to younger generations both orally and by demonstration. Although Martiniello uses what is considered a “new” medium, ancient values and Indigenous methodologies of making underpin her practice. In both glassblowing and Indigenous weaving, the “collective” is significant. They both allow time and space for human connection, problem-solving, skill-building and storytelling.

The skill of the glass blowing team is fundamental to Martiniello’s practice. Restricted by a Eurocentric palette of colors, Martiniello has tested, questioned and asked her team to experiment with layering transparent and opaque colors to develop a palette that speaks of the Australian landscape. Her studio contains glass recipes, notes and tests like a scientific laboratory. Like Indigenous weavers who collect pandanus fibre and natural dyes, Martiniello collects coloured glass strands in order to begin her creative process. She uses the ritual of gathering in a modern context. Martiniello identifies those who are skilled and openly invites new people into her making process to learn from the experience. Her transparent three-dimensional objects draw the viewer into their many layers. Her intimately layered lines represent an Indigenous way of being and existing in time and space that is cyclical rather than linear, encompassing the past, present and future.

As an artist, everything Martiniello creates is mediated through the lens of her Aboriginality and her relationship to land. Arrernte weaving practices from the Australian Central Desert were part of Martiniello’s paternal grandmother’s legacy. Martiniello recalls her Aunties who learned to weave baskets and string bags, but rarely practiced their weaving in the colonised, urban lifestyles in which they later lived. Underlying all of her artwork is a deep respect for her grandmother’s matriarchal law, which Martiniello believes has shaped her and which she is obligated to transmit to future generations. Saltwater Freshwater Weave is one way she transmits this law. 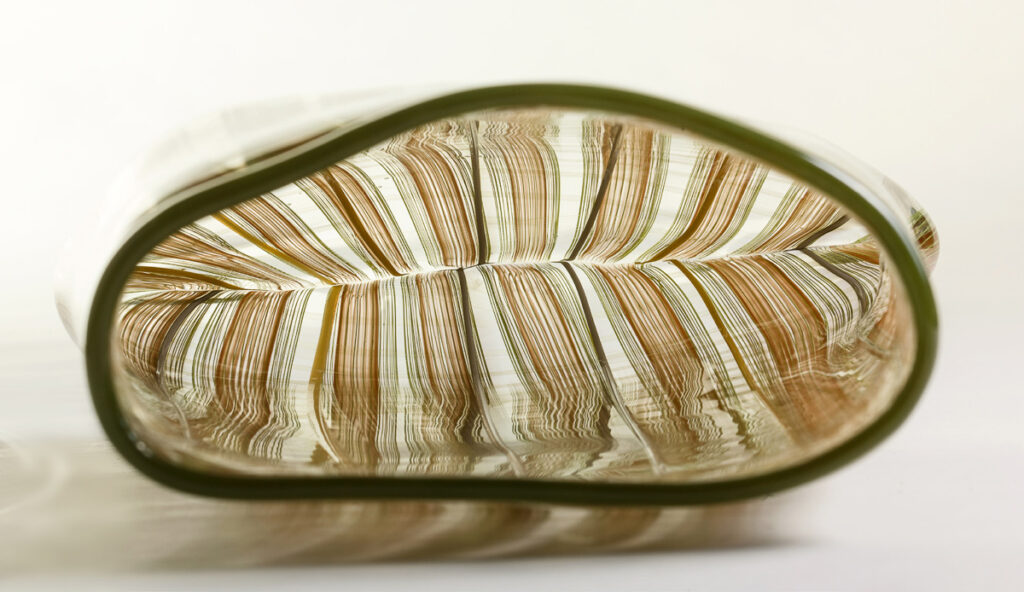 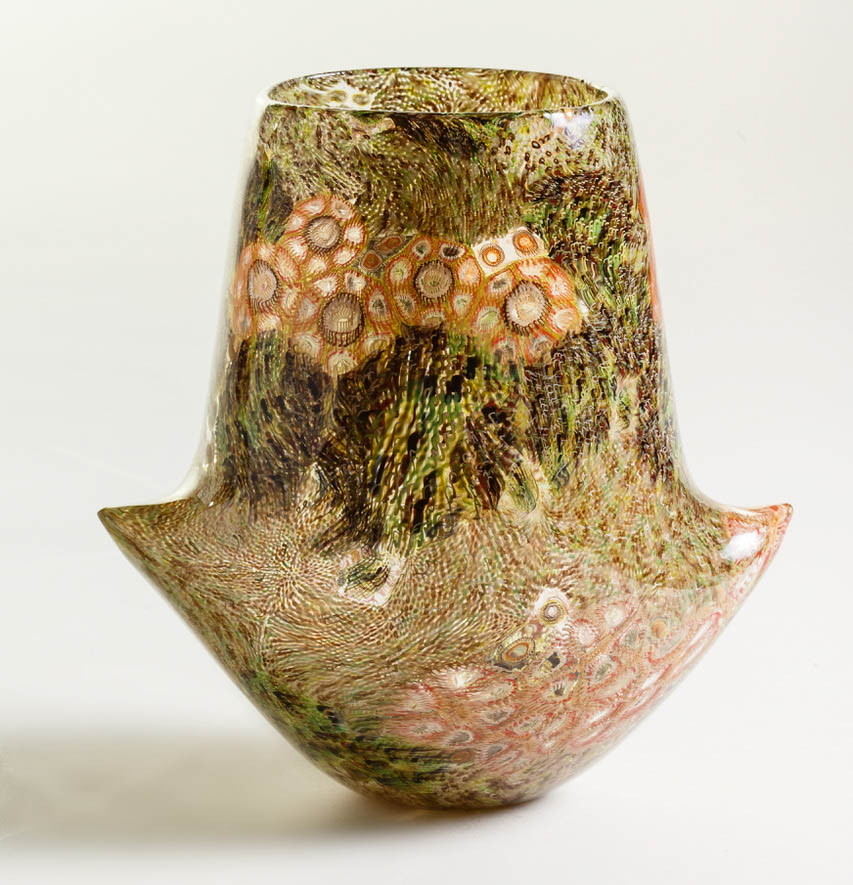 In Bush Flowers Bicornual #17 (2018) and #18 (2018), Martiniello takes inspiration from the uniquely shaped bicornual baskets that originated in the north Queensland rainforest region. Traditionally the baskets were placed in water with the “horns” wedged between sticks or boulders to keep them in place to allow running water to leach the toxins from gathered seeds and nuts.5.Julie Ewington, “Working in the River: Baskets of the Rainforest,” in Story Place: Indigenous Art of Cape York and the Rainforest (Brisbane: Queensland Art Gallery, 2003), 158- 163.   Martiniello’s vessels are adorned with native bush flowers and lines reminiscent of windswept grass from her homeland.

Upon closer inspection, these pieces have highly detailed and complicated glass canework. Martiniello is playing with the Italian technique of millefiori, meaning “one thousand flowers,” which has been used for centuries, mostly for small items such as jewellery. Bush Flowers Bicornual #17 and #18 demonstrate a clever interfusion in which millefiori has become “Australianized.” 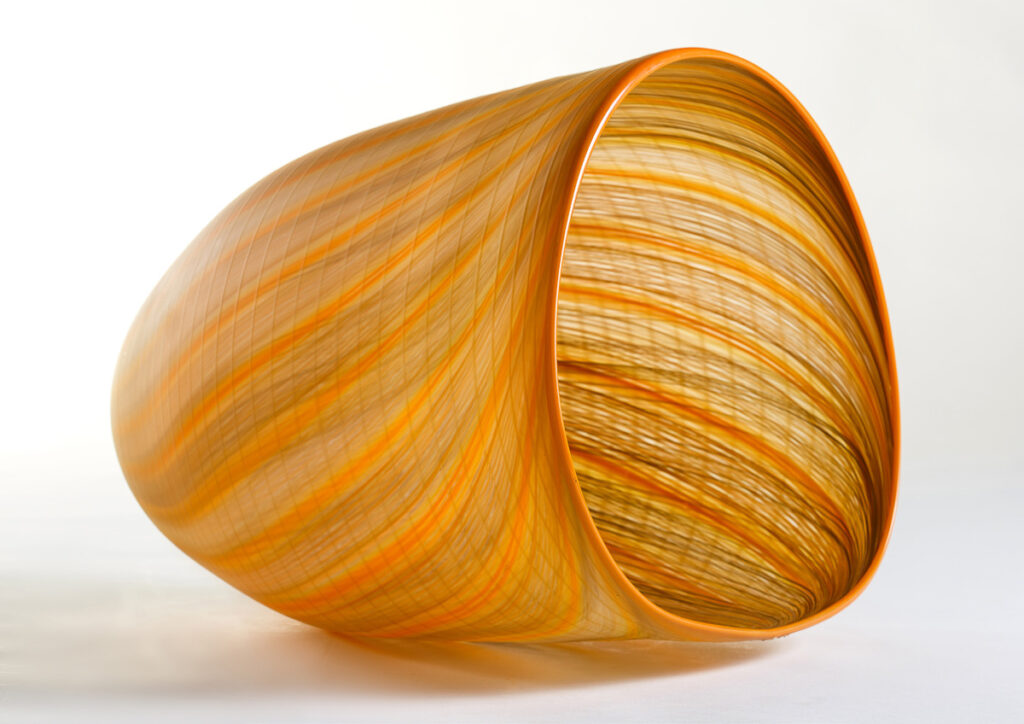 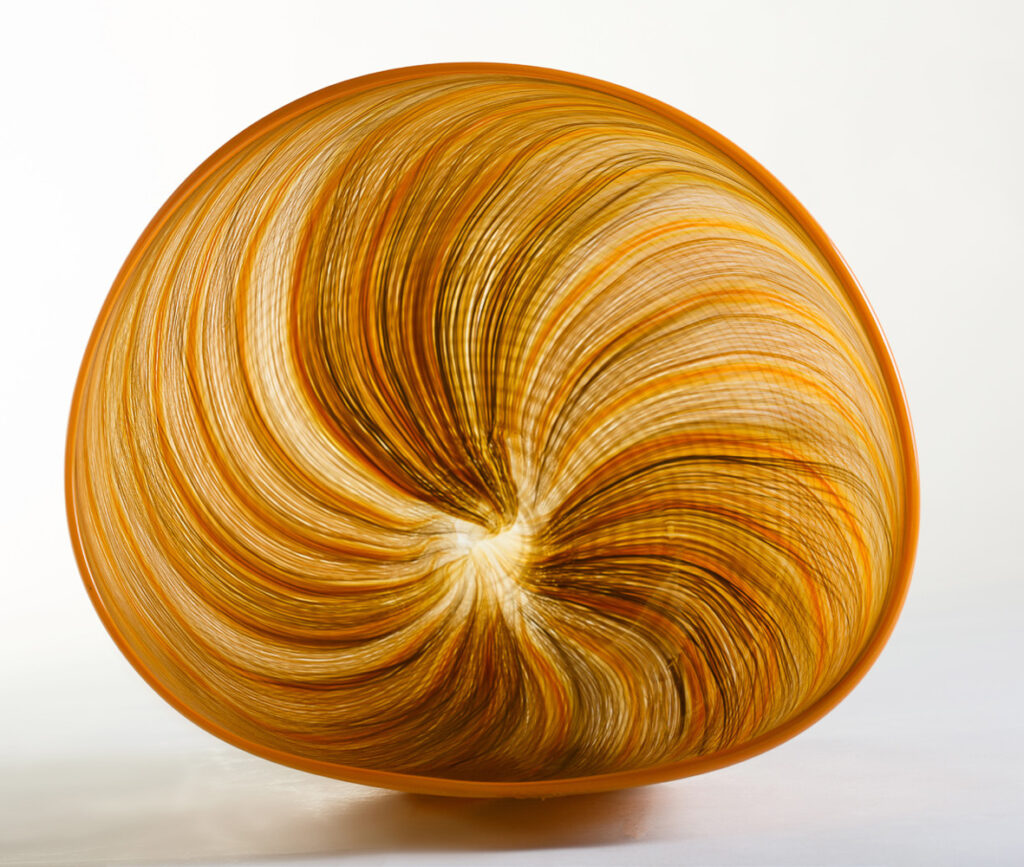 The loose and organic forms evident in Long Weave Fish Basket (2015) and Yellow Rushes Fish Basket #2 (2017) required an “untraining” among Martiniello’s expert team to allow for their off-center and loose nature. Martiniello encourages the team to let the natural elements of heat and gravity form her vessels. The openings of the vessels, rather than being perfectly round, are organic to echo a hand-made basket. The open nature of these vessels allows light to become a hidden material used by Martiniello to illuminate her medium. Leaving the glass interior of the vessel shiny and working the exterior to create a matte surface creates a juxtaposition that “holds” the light and invites the viewer to look at the works from the inside out.

Traditional eel and fish traps are designed to be placed in water so that the fish or eel swim in but cannot reverse to make their escape. Ngarrindjerri and Gunditjmarra peoples in South Australia and Victoria used eel traps extensively. These have inspired the artworks Tall Russet Fish Trap (2012), Medium Green Reeds Eel Trap #4 (2015), Long Flax Eel Trap #2 (2014) and Eel Trap #4 (2011). These vessels also interact with light and Martiniello has achieved the Australian colors of natural grasses and reeds.

The objects that inspire the works in Saltwater Freshwater Weave have been reinterpreted and recomposed from their traditional incarnations. In doing so, Martiniello adds or even challenges the definition of Indigenous identity in the present. As she well articulates:

“Indigenous artists, no matter what their particular art form, are in the process of shattering silence. We are appropriating something that belongs to the dominant culture or the colonizing culture and turning it to our use so it becomes a vehicle of our cultural expression. It’s about survival and adaptability, it’s about using what we have available to us to achieve what we always needed to achieve – for people to acknowledge that we have inalienable human rights that everybody else has, and we don’t just occupy these convenient little mythological niches that the dominant culture would sometimes like to keep us in.” 6.Interview with the artist, July 10, 2018. 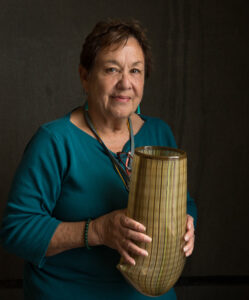 Jenni Kemarre Martiniello is an award-winning visual artist, poet, writer, and photographer of Arrernte, Chinese and Anglo-Celtic descent. She was NAIDOC Artist of the Year in 2010, and was awarded Canberra Critics Circle Awards for Visual Arts in 2011 and 2013. In 2013, she won the prestigious Telstra Award at the National Aboriginal and Torres Strait Islander Art Awards. Her works are held in numerous public and private collections including the National Gallery of Australia, the Australian Parliament House Collection, the National Museum of Palau, the National Art Gallery of the Solomon Islands, the Corning Museum of Glass and the British Museum. Jenni works from her studio at Canberra Glassworks. She is represented by Sabbia Gallery in Sydney and Paul Johnstone Gallery in Darwin, Australia.

The artist wishes to thank all the artists who have been a part of her hotshop team over time including Tom Rowney, Brian Corr, Annette Blair, Belinda Toll, Kate Nixon, Nick Doran Adams,  Alexandra Chambers, Rob Schwartz, Glenn Bush, Bridget Thomas, Peter Nilsson. Special thanks to Mel George, Simon Maberley and Canberra Glassworks. Photography by the artist, Dr. Tim Brooks and Art Atelier. The works in this exhibition have been produced with the assistance of the Australia Council for the Arts, artsACT and the Thomas Foundation. 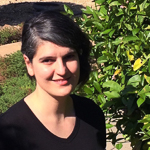 Mel George is of Greek and Aboriginal heritage living on Yolŋu land. She is an independent artist, curator and the current Executive Director of Bula’Bula Arts Aboriginal Corporation, Ramingining, NT.

This essay was originally commissioned by Kluge-Ruhe Aboriginal Art Collection of the University of Virginia for an exhibition on 20 September 2018 – 6 January 2019.