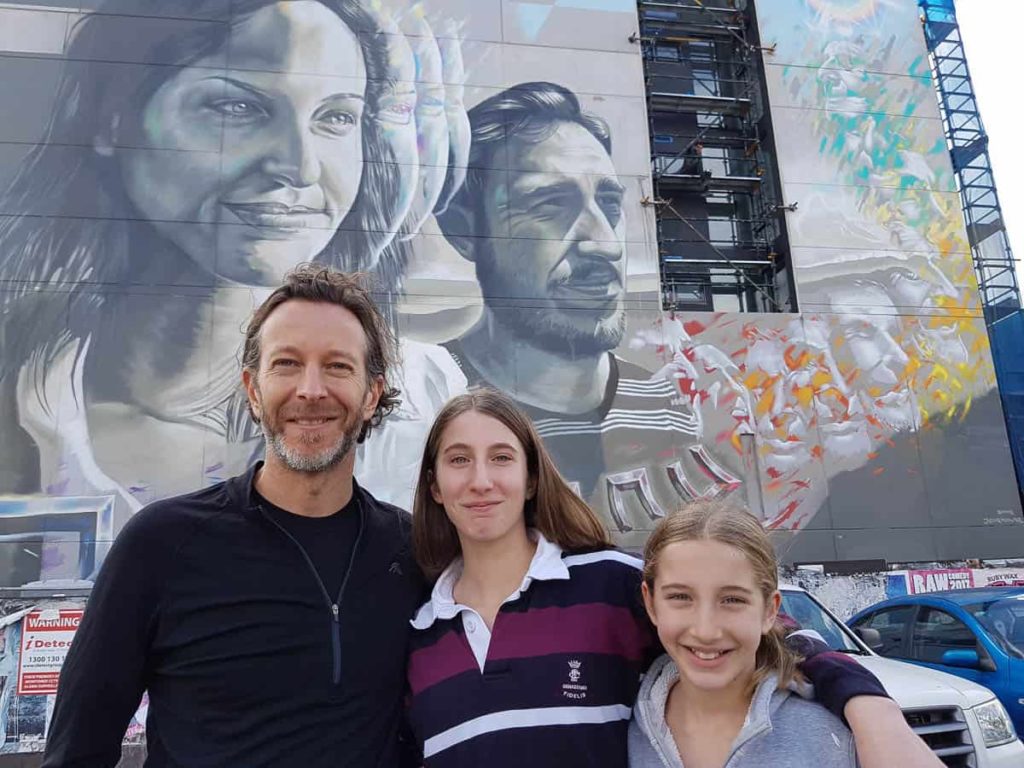 Domenic Rodolfi with two of his daughters in front of Peter Seaton, Whispers of 10,000 Generations, 2017, Lygon Street, Brunswick, Melbourne, Australia 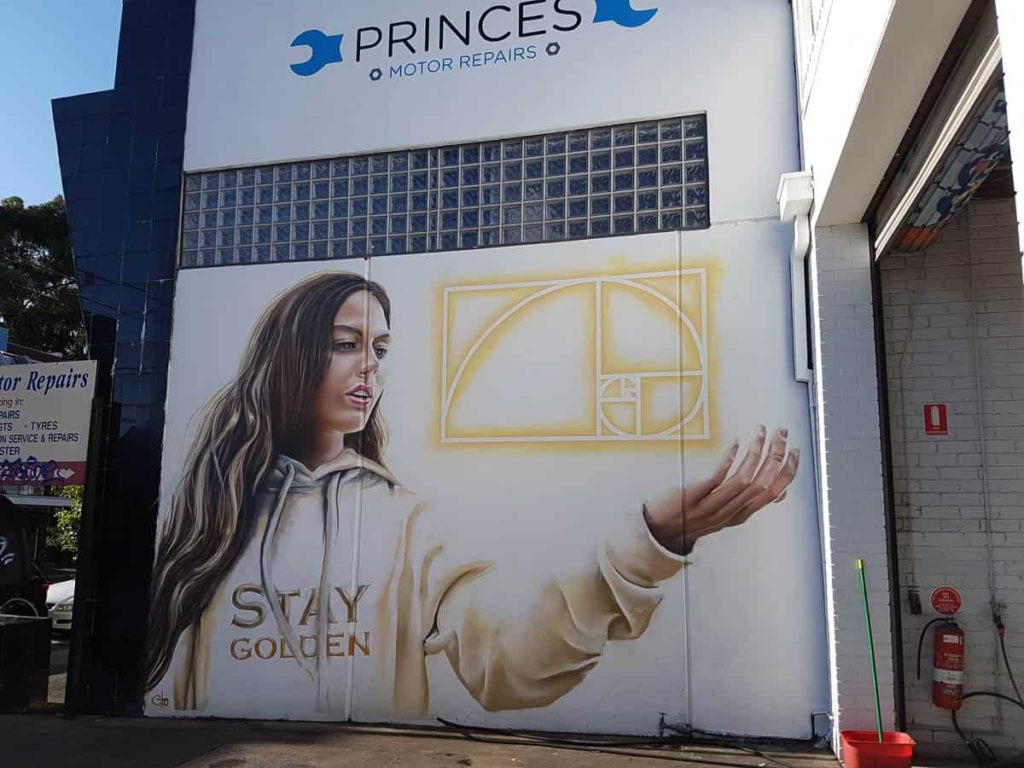 The rapid growth of apartments in the inner city is often cast negatively. Cheap building stock, generic designs and transient population degrades the vernacular character of a suburb that has evolved over generations. It brings with it graffiti tagging, reflecting the loss of community.

But this infestation may contain seeds of creative potential. One story from Brunswick reveals a curious cultural ecology emerging from the wilds of capital.

It started with a mechanic who had a problem with graffiti tagging on his workshop. He asked the local council to recommend an artist who might claim that space.

Peter Seaton studied art in Auckland, but was put off by the idea promulgated by his teachers that painting was dead. He left art school and took up sign writing as a trade. Seeking his fortune in Australia, he found a commission in Byron Bay producing a mural for the Rainbow Wholefood store on the road to Nimbin.

Peter worked with Clem on the figure of an everyday young woman with an otherworldly outlook. Clem was very pleased with the result and was furious when it was later tagged. Fortunately one of his clients, associated with the Hells Angels, was able to track the culprit and the mural hasn’t been touched since.

This mural then caught the attention of an architect who was building apartments in the next block. He’d also had a problem with tagging and commissioned Peter to produce a large mural covering an entire wall, overlooking a car park. Planning issues had prevented putting windows on the wall, so he was left with an ugly concrete aspect. The apartments were for rent rather than sale, including AirBNB, so a local feature would be useful in attracting interest.

Domenic Rodolfi and Peter worked on the design together. Domenic’s parents had migrated from the village of Fossa in the province of L’Aquila at the centre of the Abruzzo region. They were founding members of the Abruzzo Club, immediately opposite these apartments, and where Domenic had worked as a waiter. He has three daughters and was preoccupied with the patriarchal nature of the construction industry. “What do I pass on to my daughters?”

Peter had been influenced by Richard Dawkins’ concept of “selfish gene” as the idea of a code that is passed on unconsciously through generations. The eventual design Whispers of 10,000 Generations featured the landscape of Abruzzo, beatific profiles of a man and woman, and a visual reverberation suggesting historical resonances.

Peter was mindful of the tagging threat. He identifies a hostility from taggers to muralists who are seen as conforming to the system. Peter featured the names of the taggers who he had to paint over: “I wanted to recognise the efforts of the graffiti crew. It’s not an easy task to scale the scaffold of a building or roll the letters “jovemouse” across a 25-metre wall whilst having to watch your back for authorities.”

Peter was paid for his work in instalments and was also given training in the use of a crane. He has also now adorned the design with his own “tag”, a signature and Instagram handle, which has attracted him more work. 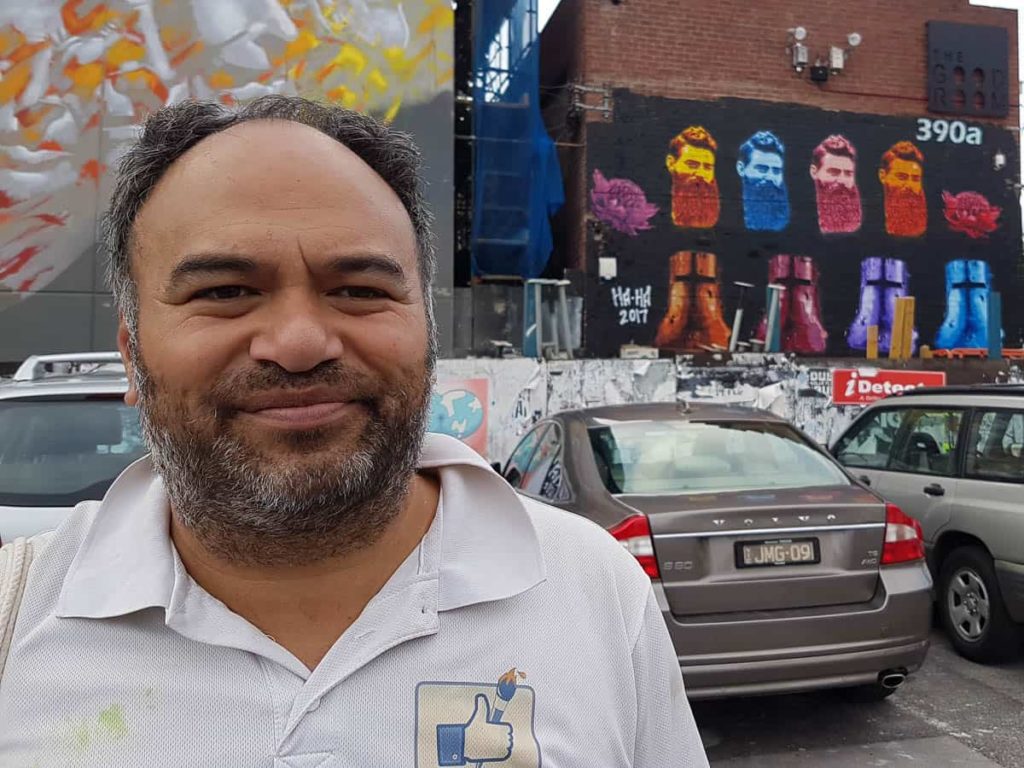 Regan Tamanui with his mural for the “Good room”

Meanwhile, the Good Room establishment directly behind the apartments has since commissioned its own mural on the adjacent work. Co-founder Katrina Lolicato chose New Zealand artist Regan Tamanui (“Ha Ha”), who she’s known for 18 years. He made a series of hipster style Ned Kellys to express a local defiance. Tamanui shares Seeton’s antipathy to conceptualism, which he has turned into a movement—Stuckism. Lolicato is pleased, “It sets the tone for the whole gallery’s approach while grounding it in local street art heritage.” Space has been left below the mural for any responses.

The Abruzzo mural may well be an example of “hipster capitalism”, produced by an artist who began by investing creative agency in the redundant trade of signwriting. But it also fills the void of public art in a time of neoliberalism, where government is more focused on administration than community. It demonstrates how capital can offer creative possibilities, provoking a series of reactions that combine to a lively local dialogue.

We’ve become used to the generic stock photography that often adorns cheap new developments. The scene of a couple sipping lattes could be anywhere in the first world. Then along come the taggers who create a familiar scene of urban blight. But the very skills that produced those tags can be used to keep them at bay, with scenes that behold a uniquely local story. 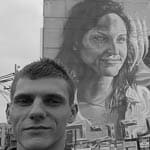 Peter Seaton is a Melbourne-based artist who produces work for outdoors and indoors.

Muhubo Suleiman ✿ A home within a home
The quest for hi-fi design
Talk of the town: How do you balance love and money?
E-commerce: what is gained and lost when artisans sell online
Weaving land and people: the Gwen Egg story
Loved up? A review of Love: Art of Emotion 1400-1800
The story behind the handmade covers for Garland
Carlier Makigawa ✿ Delirious in Uzbekistan