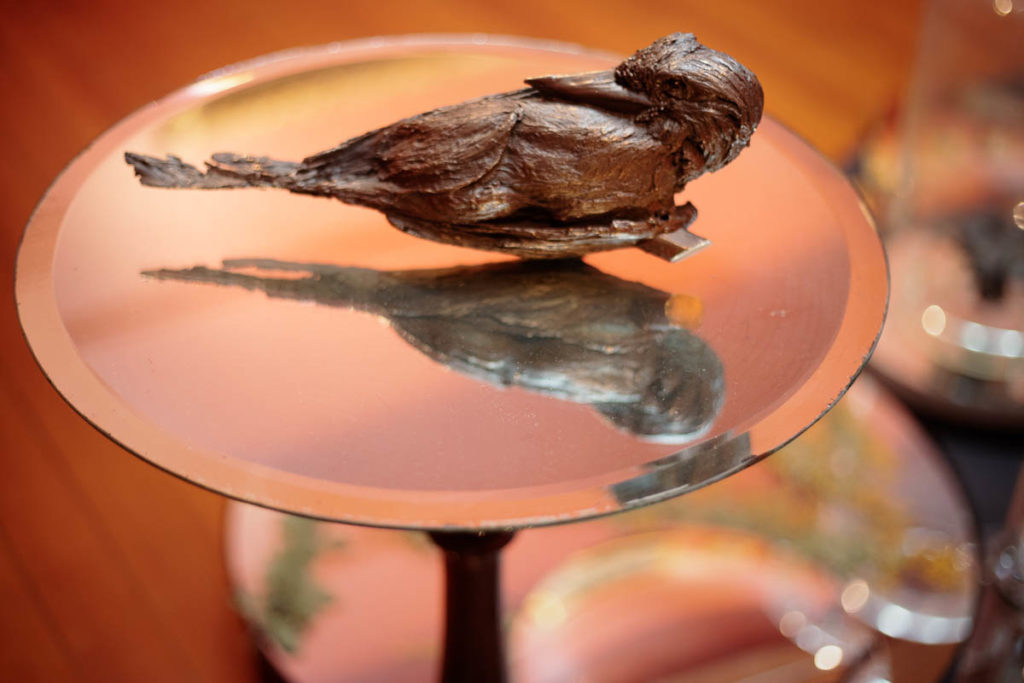 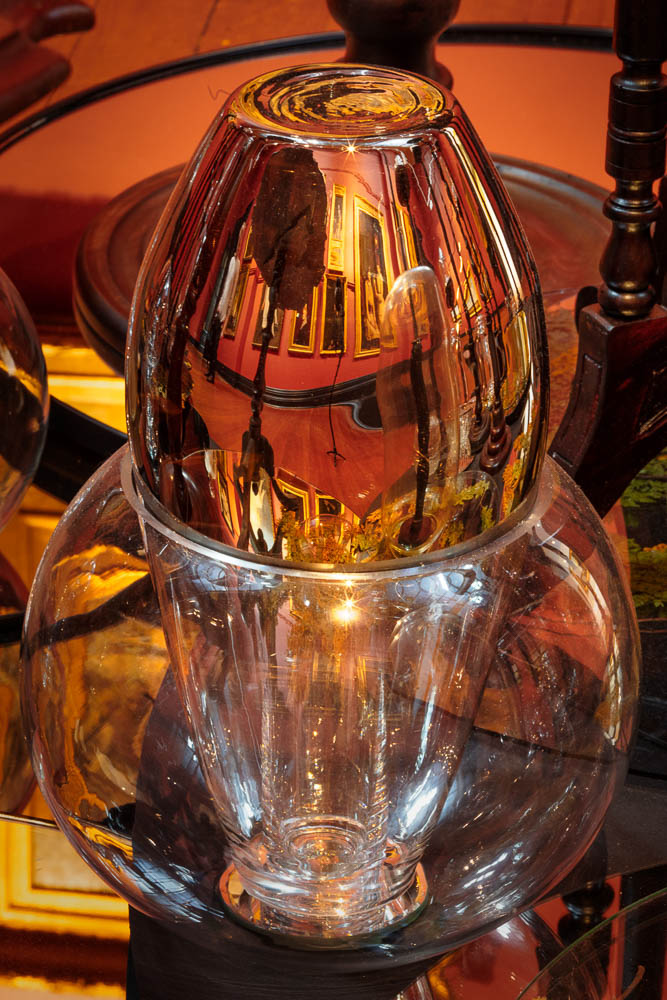 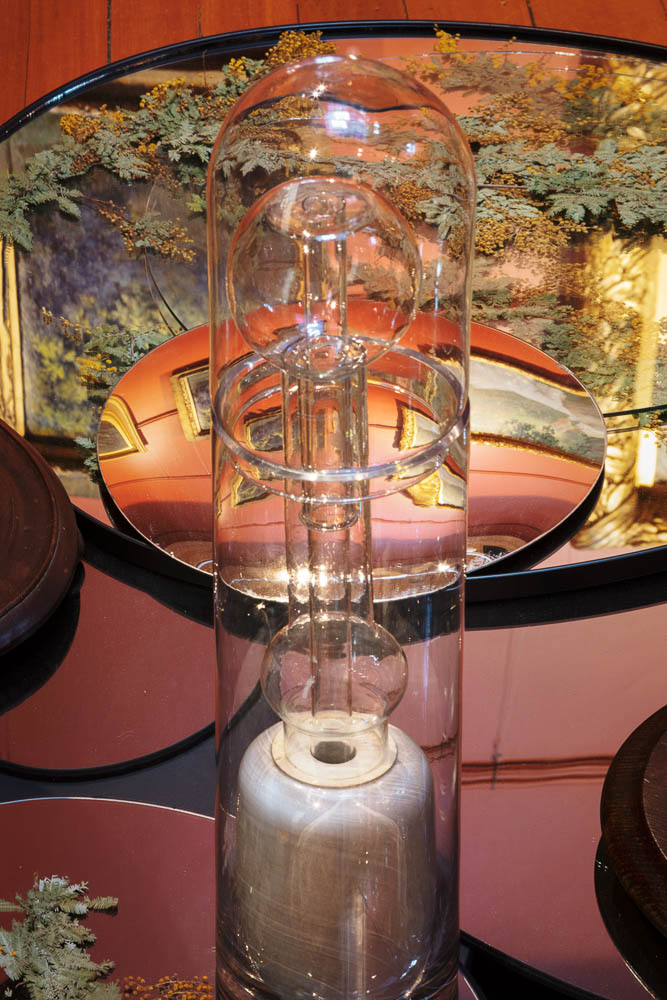 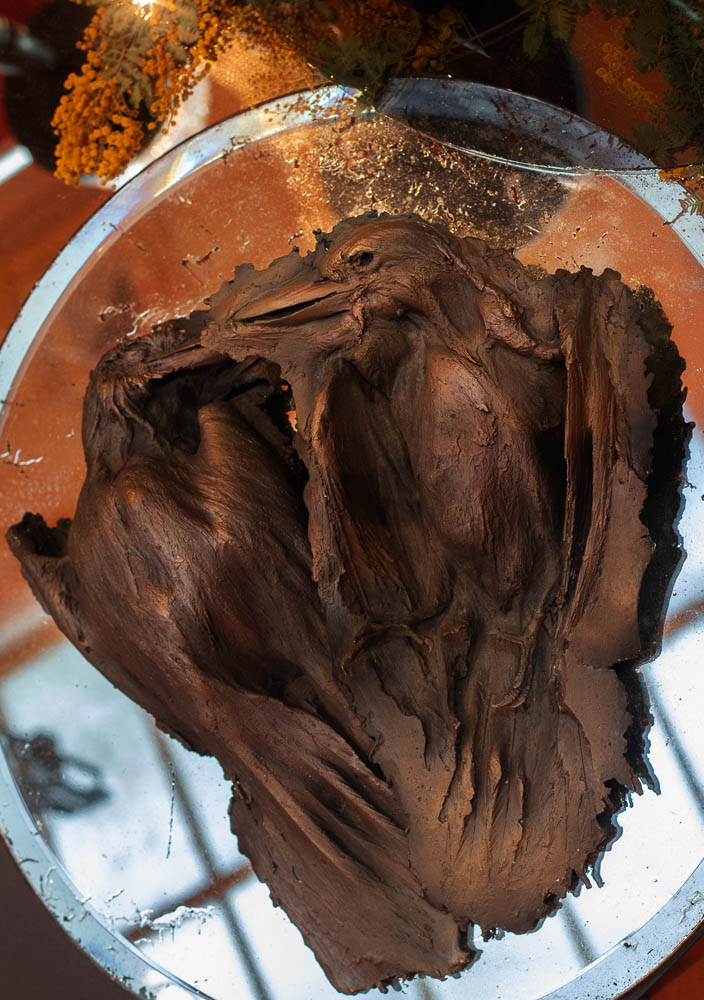 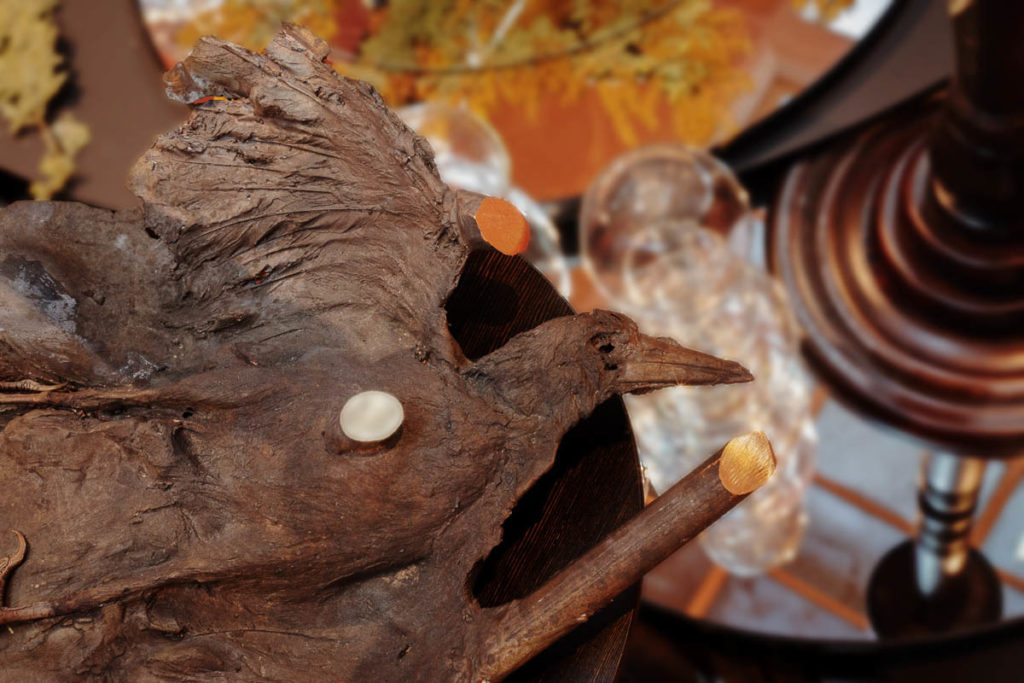 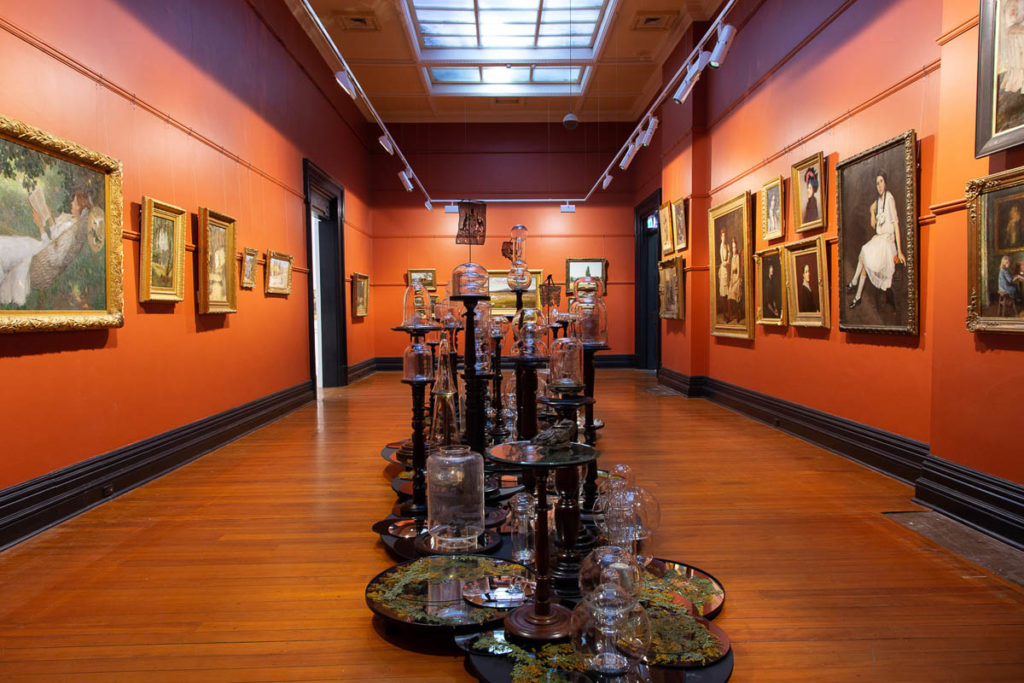 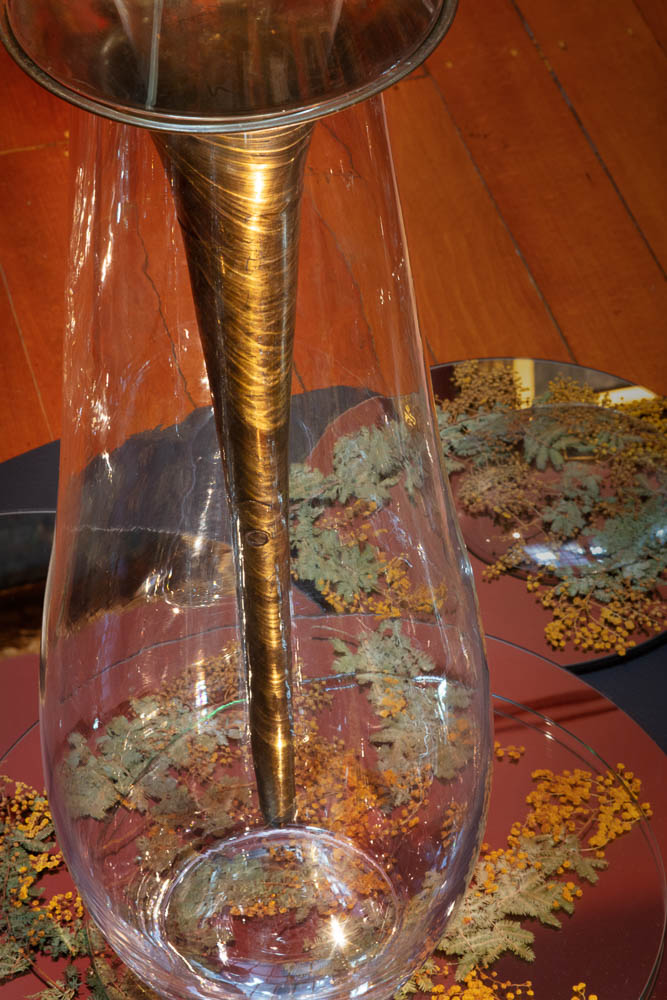 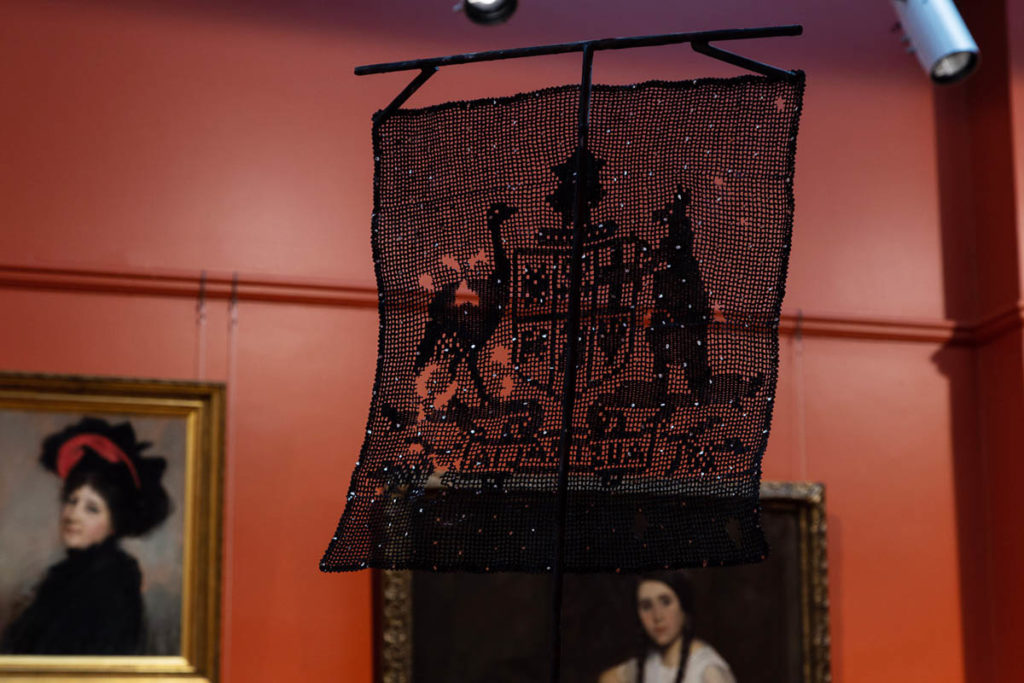 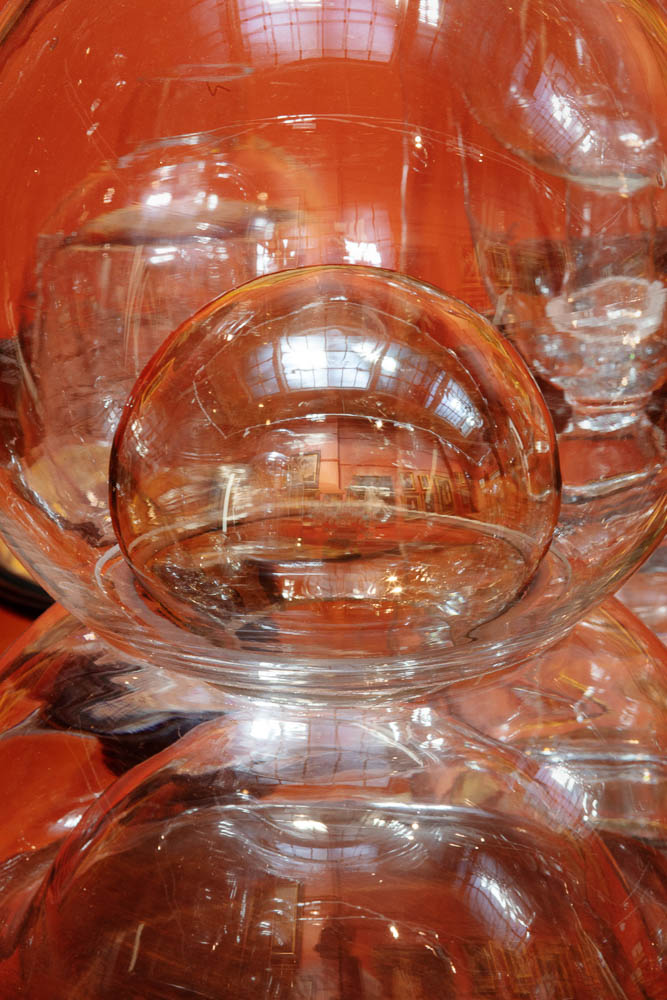 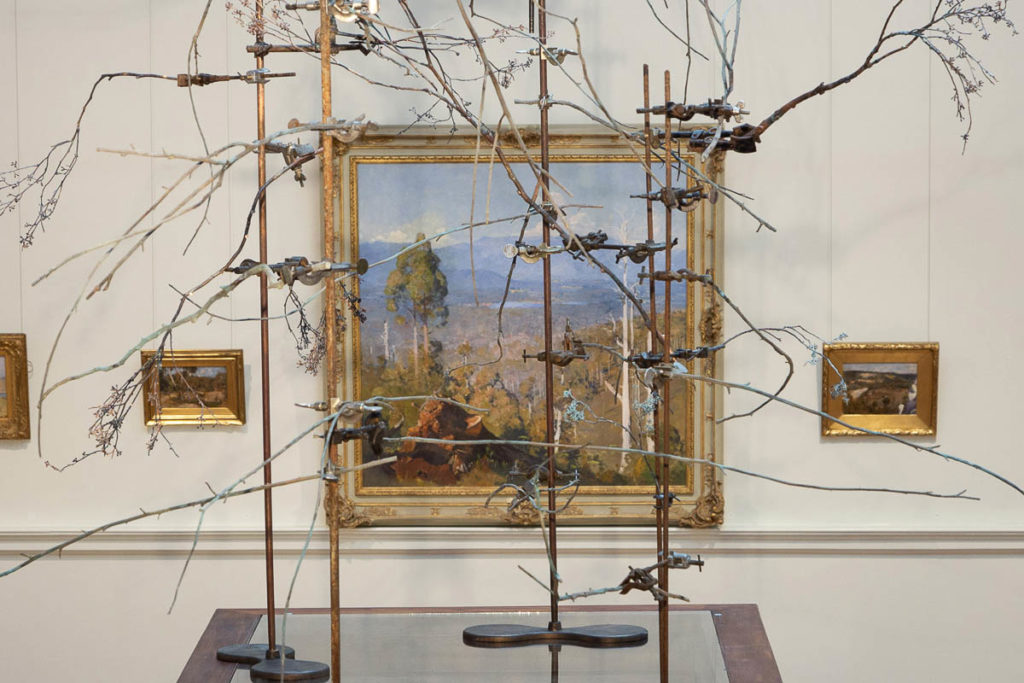 As an artist, Louiseann King has always been a weaver. She’s created and used all manner of fabrics as a crucial part of her art and travelled the world in search of obscure textile practices.

But that’s not what I mean.

In her latest exhibition, solis, she weaves a network of ideas across the gallery space, a tapestry of difficult truths that disrupt our historical conception of this country. In presenting these ideas, King employs some of the very media traditionally used in lionizing the “young” Australia. She intertwines an eloquent collection of found objects with masterful sculptural forms to provide an aesthetically rich and thought-provoking installation.

Entering the Ferry Gallery, upstairs at the majestic Art Gallery of Ballarat, what’s most obvious is the preponderance of exquisite found material on display. I first see an island of glass and timber. Antique turned timber pedestals are both surmounted by and surrounded by glass objects of many descriptions. The impression is of an artificial forest. Carefully, but not geometrically arranged, it appears as more a natural copse than a constructed plantation. The forest metaphor is continued in the layering of heights. I can look down to a “ground cover” of mirrors and natural debris, slightly upwards to an “understory” of timber columns and glass, then straight ahead to the “canopy”, where distorted glimpses of paintings (the normal contents of this space) appear through mysterious glass cloches, cylinders and other nineteenth-century paraphernalia. Much of the surrounding gallery can be seen in fragmentary form, reflected and refracted through the glass at many angles. Crochets of iconic Australian mammals and birds are interspersed throughout.

It’s a strange feeling to be admiring a fake forest. The overall form suggests nature, but the individual objects are clearly of the machine age. King has scoured junk shops, antique markets and deceased estates near her rural home in central Victoria to find this raw material. She doesn’t just look for glass, she looks for glass old enough that its original purpose is unknown to modern viewers. Giant transparent cylinders and bowls are reassembled to look like vintage electrical valves and other obsolete industrial components. An elongated glass cone is so elegantly combined with the bell of a brass musical instrument that the resulting form seems fit for some unknown magical purpose.

As I move around the space, personal associations and histories sparked by this found material readily link with broader archetypes. Crocheted doilies just like my Nanna used to make are mounted on metal poles so as to suggest military standards, kitchen mixing bowls suggest scientific lenses, and discarded mirrors are layered on top of one another to mimic multidimensional pond ripples.

The overt presence of the found in this exhibition is not to say that the artist has abandoned the making component of her practice—far from it. But even much of the material she has made in recent years rests on a fascinating found methodology; as bronze castings taken directly from natural objects around her country home. King even has a government-issued permit to collect and use dead native animals for this purpose. The resulting casts sound macabre, but in the gallery context, bristle with cultural associations well beyond popular horror; vanitas still life, the “death mask” and the wunderkammer. By repurposing these traditional modalities to the animals and plants that surround her home, the artist pleads her case for a living world in imminent danger of ossification. With bronze, she revels in the opportunity to “glorify the ephemeral and the transient” through “one the most laborious and historically significant of sculptural techniques”.

Aware from the beginning of how unusual it is for a woman to get involved in the physically demanding and unpleasant work of sculpture fabrication, King persisted, collaborating with well-known Melbourne foundry Fundere for nearly twenty years to perfect her technique. This trailblazing stance as a maker clearly echoes one of the intellectual challenges she sets herself in solis; to draw attention to women’s role, or lack thereof, in the founding of Australia.

It’s a surprisingly uncomfortable message that she bears. The aforementioned “doilies as military standards” are a good case in point. They appear harmless at first; simple and sentimental graphic renderings of native animals in delicate crochet. King has again cast them in bronze, but more importantly, the military analogy infers a crucial role played by women in supporting the Colonial project.

This causes me to ask a lot of questions.

While they were making these apparently innocent doilies, what did these women know about what their husbands were doing? By providing comfort and domestic sanctuary, were they complicit in crimes required to secure the land? At what point does honourable domestic work become support for shameful paramilitary operations?

A post-colonial angst of this type haunts my time in the space, exaggerated by the outwardly prosaic nature of the doilies. Their everyday dullness is like a lie, obscuring what happened in Colonial times with a patina of domestic fastidiousness. Likewise, the earnest information panel proclaiming the exhibition as taking place on Kulin Nation land serves to highlight the ironies at play.

The dialogue between objects continues on the gallery walls, with the artist installing a selection of venerable paintings from the Art Gallery of Ballarat’s storage vaults. While the glass and timber in the centre of the room suggest civilized domestic activity such as crocheting, the arrangement of furnishings and presentation of food, the paintings represent leisure and indolence, either voluntary or enforced.

Proceeding to the “Crouch” Gallery, I transition from this nineteenth-century drawing room languor to a commodious, brightly lit space containing a large empty antique display cabinet surmounted by spindly twigs. The latter are oddly held in position by laboratory retort stands. The mystery deepens upon closer inspection, as the “twigs” turn out to be elaborately crafted bronze replicas of native foliage branches. The artist later explains her method and its purpose via email.

“I have cast directly from the small branches of a living wattle tree, stripping down the leaves and exposing the tiny buds that would have developed into the flowers… There are tiny circles of polished bronze exposing the place where the sprue has been cut. These tiny minimalist circles are “signifiers” of the translation from the natural world into that of artifice.

“For me, that translation from the natural to the artificial using specific manufacturing techniques, here jewellery casting, implies both a sense of preciousness, regard for the natural and an ominous feeling for a future where the natural will have to be manufactured”.

This sense of loss in the natural world is again shown through the considered use of paintings from the historic collection. I’m instantly aware that I don’t have the museological crutch of “the label’, as the walls are bare except for the paintings themselves. This is effective at focusing my mind on the actual subject of each image. Key pictures continue to shine though, even without their legitimising labels. In particular, Arthur Streeton’s imposing “The Vanishing Forest” seems perfect for King’s intentions, showing a scarred treeline, undoubtedly the product of rapacious human machinery. Between the painting and the bronze tree branches superimposed in space nearby, a powerful image is formed of environmental destruction and the vacuous human inventions designed to redeem it.

King has a gift for weaving these binary oppositions like a textile. Her works are often completely transparent, yet inscrutable. They capture transient organic material in near-eternal bronze and they elevate the discarded and anachronistic to a direct dialogue with key works in the national artistic canon. Having only partially absorbed these ideas at the time of viewing though, I confess my first impression of the exhibition is less complicated, incorporating liberal doses of beauty. Asked by the artist to photograph the installation, I have an unusual entrée. But the hour or two I spend documenting it could easily be replicated by casual viewers, moving about to take in the gorgeous three-dimensionality of it all. The refractive surfaces King uses are easy to enjoy and explore, an excellent counterpoint to the more weighty matters embedded within for those who seek them. 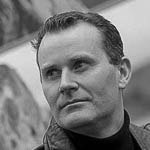 New Primitives in Kyneton
Waterfall in a box
淡路・阿波人形浄瑠璃の衣裳が生きていた景色
Learning from Nagaland
Knot thinking: The Boorhaman residency
New models for craft sustainability: Engaging with the "experience" economy ...
Vipoo Srivilasa: Will my heart remember?
Full of emptiness: The wonder of Hagi ware