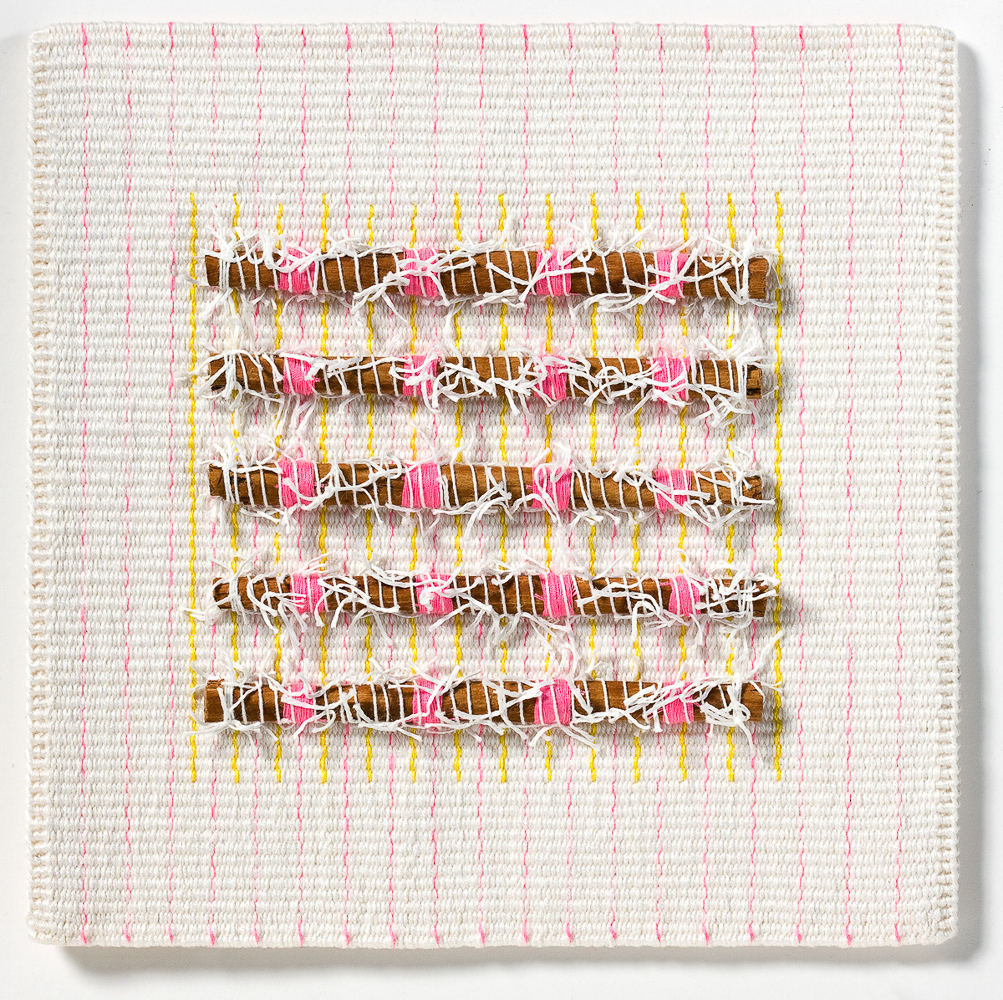 Sara Lindsay takes a boat to the cinnamon island in Sri Lanka, where she is inspired by the work of the cinnamon peeler to weave enduring works of art from the quills.

My mother was born in Ceylon, now Sri Lanka, in 1924. A colonial child of an English tea planter.

When asked to make an artwork for an exhibition about Time I decided to weave a timeline of her life. Muslin, a fabric of the tropics, was dyed with tea and turmeric. The use of cinnamon and rose petals signified the coming together of her birthplace and her British heritage.

At this stage, I had not been to Sri Lanka, but weekly visits to my local Asian Grocery supplied me with small orange packets of cinnamon quills. Gradually, as I collected and sorted them into sizes, I gathered enough to build my first cinnamon construction. Pierced with a needle and carefully sewn onto board, the cinnamon’s rich, warm smell transported me to the place that had become so vivid in my imagination. My siblings and I still recount the stories told by our mother about her Sri Lankan childhood. So different to the one we had experienced in post-war Britain.

In 2005, my daughter and I had our first trip to Sri Lanka. We fell in love with the people, the landscape and the food. We explored spice gardens and tea plantations. We dined on hoppers filled with delicious curries made from vegetables we had never seen before. No wheat or dairy. Coconut milk and many colours of rice filled our sensitive bodies. We were in gastronomic heaven.

After that first journey I returned to Sri Lanka many times, whilst continuing to make more cinnamon and tapestry constructions; Cinnamon & Ticking,  Cinnamon, Tea & Tears and  Cinnamon & Roses, which toured Australia and found an attentive audience in Delhi.

On one of my regular retreats at an Ayurvedic Centre south of Colombo, I boarded a small canoe and was taken to the cinnamon island, where I met a cinnamon peeler and his wife. Remembering the tender and evocative poem by Michael Ondaatje, I watched the peeler strip the bark and prepare it to be rolled into the particular quill formations we are familiar with. I came home with small bundles of cinnamon, so beautifully slotted together that I have never been able to separate them. 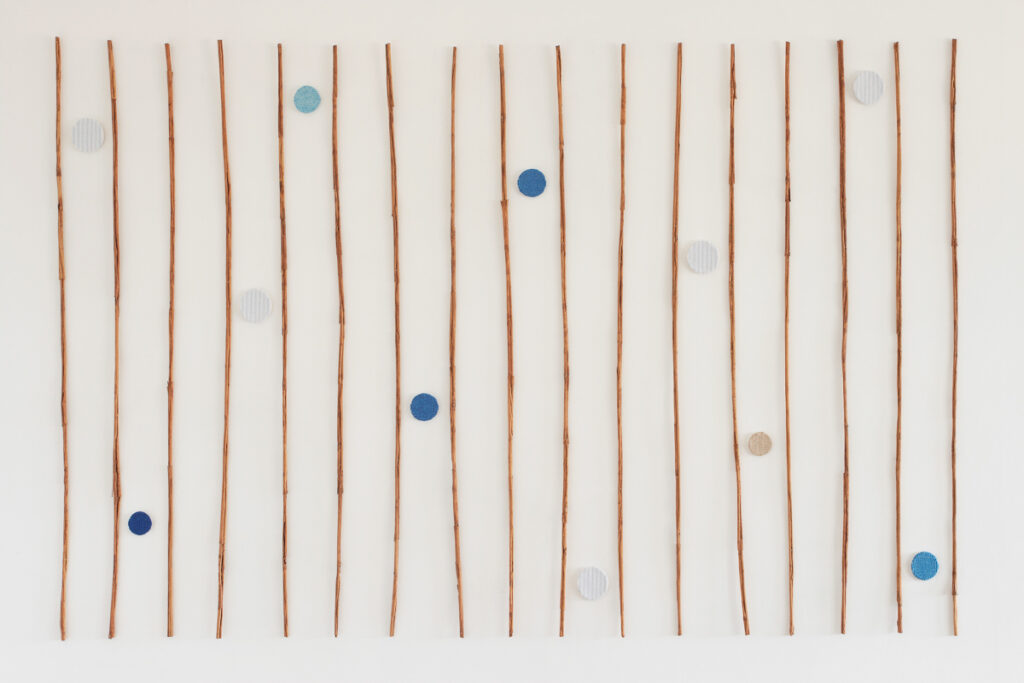 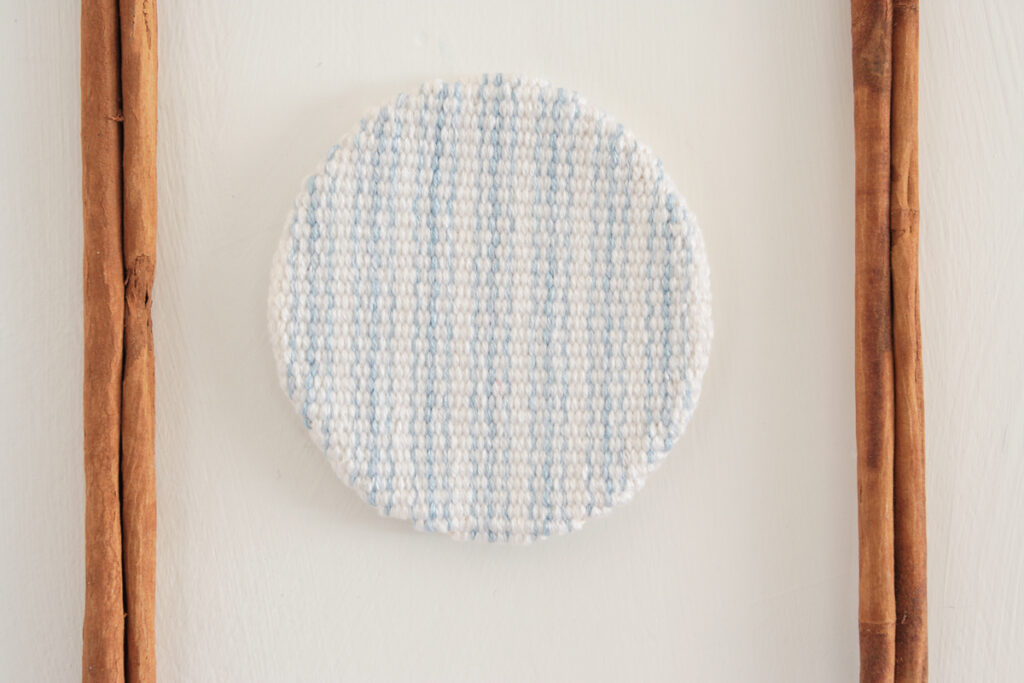 Later I discovered a supply of cinnamon in Sydney. It was available in 120cm sticks. I purchased several and lovingly packed them. Determined to take these fragile structures back to Melbourne as hand luggage, I resisted my friend’s concern that it would not be allowed. No need to worry. The flight attendant was thrilled to take care of these exotic objects. They arrived home safely and became a new work called Cargo.

Pinned to the wall, with small circular tapestries placed amongst them, their lyrical, linear shapes read as painted or drawn marks from afar until the viewer realised this was not the case. With the recognition that they were made from cinnamon, a perceived sense of their smell drew the viewer into a closer observation of the installation.

I still have boxes of cinnamon tucked away in my studio but I no longer make artworks with them.

Now, I return to my mother’s childhood every morning as I sprinkle specially sourced Sri Lankan cinnamon on my breakfast. Raspberries, almonds, cinnamon and yoghurt provide the perfect combination of tastes, associations and memories.

This writing was a response to Lokesh’s class Cooking a Potpourri. You can follow Sara Lindsay at @slindsay.studio.