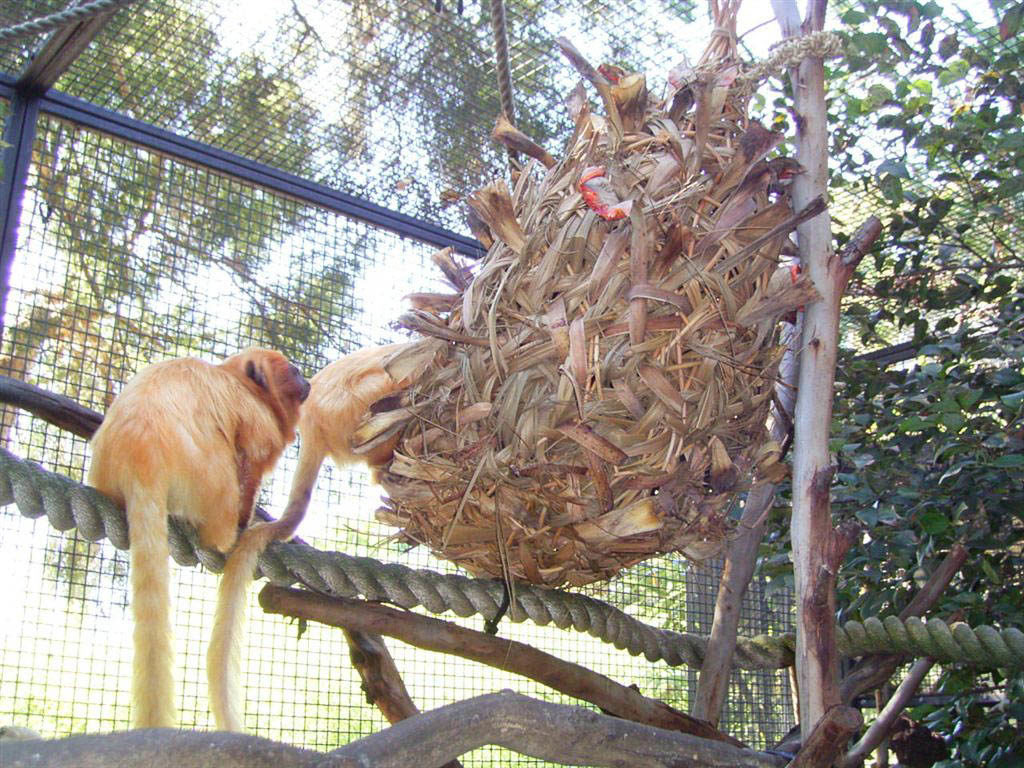 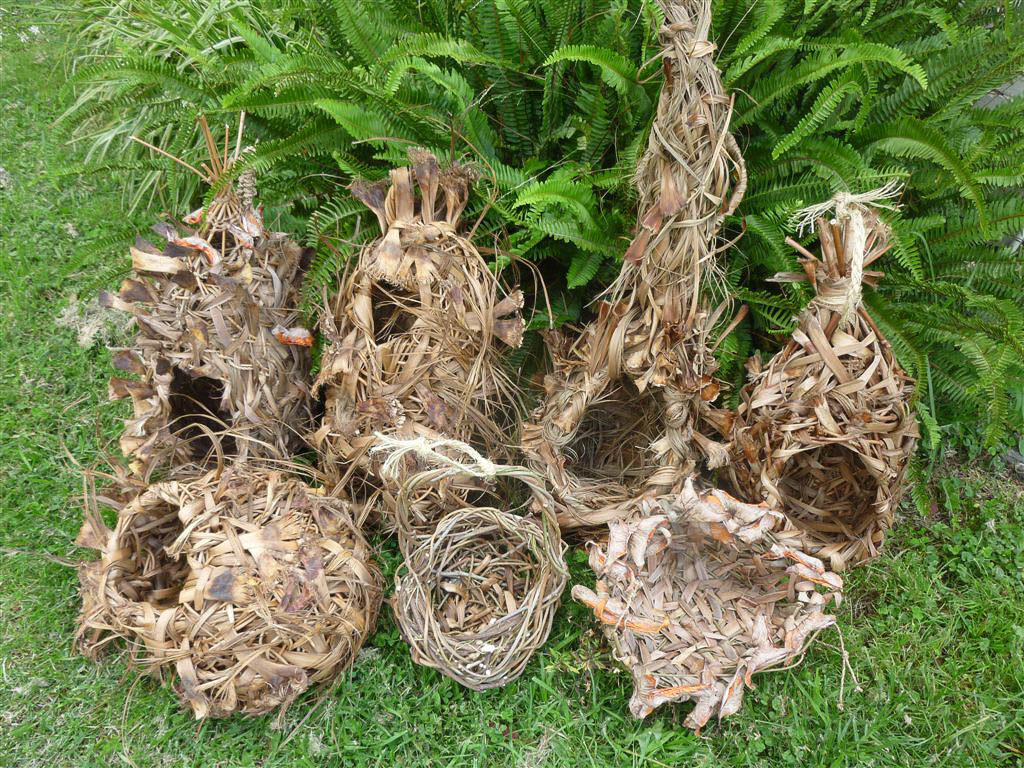 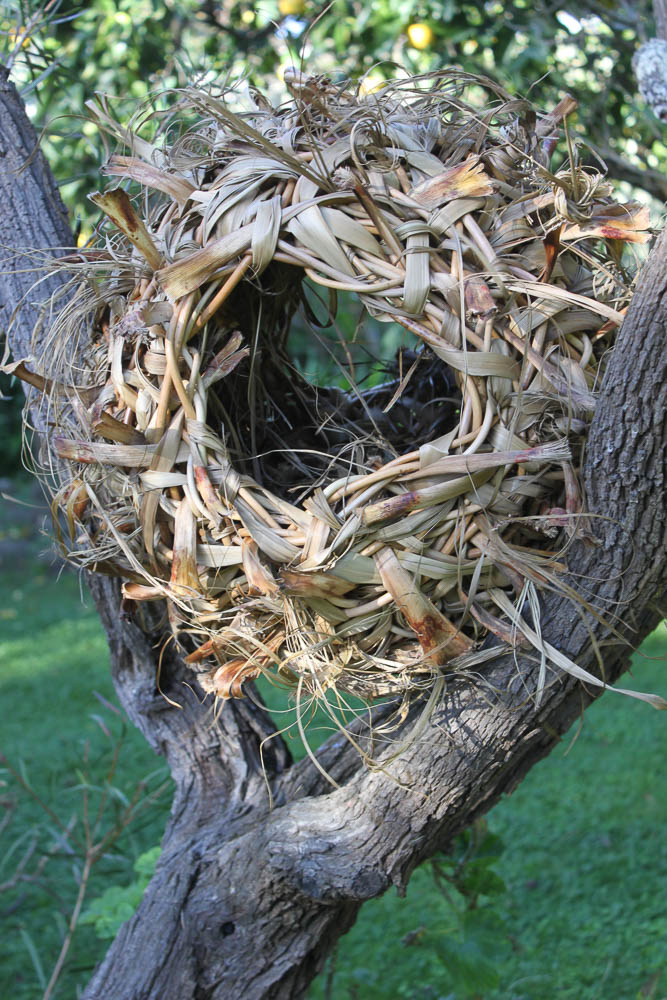 During a visit to the Melbourne zoo last year I couldn’t help but notice the baskets in the arboreal primate enclosure.  Hanging from trees and scattered about were what looked like cheap imported baskets, these seemed to be used as food depots and I well remember commenting to my companion about their somewhat dubious aesthetic appeal.  Attending a meeting of Basketmakers of Victoria some months later I was pleased and delighted to hear one of our members had a contact at the zoo who had approached her to see if she was interested in supplying new baskets as the spider monkey enclosure was to be refurbished.

It was to be a big project and simply too much for one person to achieve so the group agreed to organise and make new baskets.  The first suggestion of melon baskets dangling from the trees was soon rejected and Liz Reid agreed to become project manager and liaise with the zoo about their requirements.

Possibilities were discussed with the zoo’s representative Karen West.  While the previous baskets had fulfilled their function as feeding stations for the monkey’s diet of chopped fruit and vegetables the zoo was well aware of their limitations.  New containers needed to fulfil a number of specific criteria. They were to blend into the environment and be aesthetically pleasing to visitors. Their prime function as feeding containers needed to be considered both from the keeper’s perspective and also the monkeys.  The monkeys’ overall health was an important consideration so being able to move the locations of feeding stations and having different materials about would contribute to enriching the environment for the animals.

Materials to be used in the project were subject to extensive discussion with suggested plants being tested to ensure they would not be toxic or harmful in any way to the monkeys.  They needed to be durable and able to withstand periodic cleaning and have a strong element for hanging each structure. Dyed materials and wire were not to be used and darker coloured plants were preferred.

The beautifully shaped nests made by Oropendola birds were referred to by zoo staff and so with all the aforementioned criteria in mind four members of the group set about making some sample shapes.  Margaret Balfe, Maree Brown, Jane Henry and Liz Reid completed seven baskets in slightly different sizes and shapes but largely based on the teardrop shape used by oropendola birds. Some of these samples were assessed by the zoo before they were totally finished with ends flying out everywhere.  The zoo was pleased with this aesthetic and completed baskets were placed in both the spider and tamarin monkey enclosures for final assessment by the important four-footed customers.

At this stage, extra assistance was requested from other makers and I then became involved in the project.  I was given a choice of the type of basket I would like to make from the different shapes made in the initial batch.  The measurements of the basket I chose were 40cm high, x 40cm wide and 35cm deep so obviously the shape was to be loosely rounded although my instructions were to let my own personality loose while making.

The frame of the basket was to be constructed from Pahang supplied by the zoo.  Hardy constructions such as these need a strong yet pliable material and generally Palembang would be used as while it is a rattan from the same family as Pahang it is a slightly more pliable material and has a beautiful sheen.  For non-basket making readers, both these materials are harvested with their bark on (unprocessed) and are simply sized and bundled. It is a more expensive material and despite pleas from customers our sole remaining Victorian supplier has unfortunately decided to no longer import the product.

So I began constructing a very strong random weave base with the rattan very closely woven.  There were to be no gaps larger than 2cm. Two openings were to be built in with these sized 10cm or larger, this was to ensure the monkeys could reach in but not get their heads stuck when investigating the new construction.   Cordyline australis is one of the hardiest materials available in gardens throughout Victoria so I chose this as the material to infill the small holes left in the outer random weave. It was essential of course that this material be in really good condition at the outset so as to withstand the hard wear to which it would be subjected.

Being a practical soul, I initially made certain all the inside ends of the cordyline were well and truly secured and tucked away as I knew this would facilitate cleaning.  Fortunately, I hadn’t progressed very far when Liz said the zoo preferred the inside to be totally messy! Quickly changing tack I left ends protruding throughout the interior to match the ends left on the exterior.

As is my practice particularly when embarking on a project with multiples of similar sized work, I kept a log of time spent preparing and constructing the basket.  I agreed to participate in the project not for the monetary reward but because I hoped it would be a project that would enhance the zoo experience for both the inmates and visitors.  Negotiations for pricing had been set at the beginning of the project and so were not a consideration.

The total weight of Pahang used was 1 kg.   My cordyline leaves were very long and of beautiful quality and I used a total of 140 leaves.  The total time I spent making was 19.30 hours. It was very time consuming ensuring every space was covered but, of course, it was satisfying knowing the end product would be appreciated by very cute critters in their very attractive new home.  I won’t divulge here quite what the payment was but it certainly was not a commercial proposition.

The zoo has a long-range plan to overhaul all the arboreal monkey exhibits.  Baskets already purchased and in use are being swapped around the various exhibits to assess the monkey’s reactions and practical considerations for the keepers.  This will help to determine any special requirements for the various types of monkeys. With the help of more basket makers, another 35 baskets are being made. These baskets will fulfil requirements ranging from holding metal food trays and hiding food like meal worms and crickets as well as being ideal for the monkeys to sleep and hideaway.

The new spider monkey enclosure is now open and is being enjoyed by all who live there or visit.  I must confess I do wonder if the monkeys could have made their own constructions if supplied with the materials?  Many thanks to Liz Reid for her input into this article and for her project management.