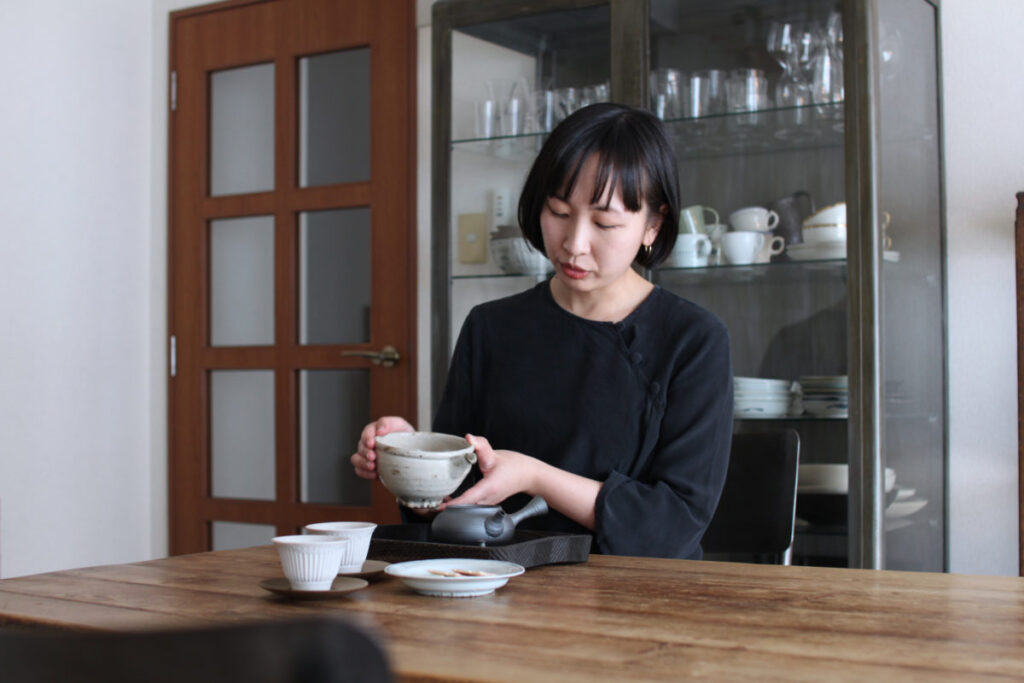 Wakana Yanagida profiles the Japanese vlogger who celebrates the pleasure of living with handmade objects.

From the morning routine to the preparation of dinner. In watching videos of ordinary life, I’m enveloped in a sense of comfort, as if watching something being repaired that I didn’t even realize was broken. Antique lovers from afar used to visit her shop, but these days, Futaba (known only by this name) creates content on YouTube. We asked Futaba, who has shifted from a “seller” to a “user” to convey the richness of her daily living, about her secrets.

It’s especially in the cold spaces of apartments that we need to rely on material things.

It’s a fairly typical 3-bedroom apartment. The road running beside the 30-year-old building is lined with traffic, and there is no shortage of mass retailers and chain stores nearby. Such a suburban scene can be found anywhere. Yet, within the room, there is a stillness, as if a protective spell were cast there. I’m suddenly reminded of the quote by the mathematician, Kiyoshi Oka, “As fish live in the water, people live in the mind.”

“It’s precisely in spaces like this that we should take advantage of what material objects offer us,” says Futuba. She shares her apartment with her husband, an office employee.

If you’re only considering the furniture and general interior design, then it’s just an apartment like any other. But with this table, that Japanese dresser, these earthenware pots and those bowls, there is a sense of presence that makes the space unique to the individuals within.

“In my shop, I would often hear people say, ‘My place is too small for this,’ or ‘I don’t think it matches,’ and I thought, that’s a shame. I don’t think it was so much a lack of confidence in the selection as it was a matter of habit. The world is full of interesting objects—the handiwork of artists and crafters—that I felt I could enjoy opening up my own little world by bringing them into my home.”

Futaba’s words struck me. I might very well have said the same thing as her customers. Where did this habit of treating my home so dryly come from? Her simple questions, spoken in her relaxed tone, made me realize how desensitized I had become.

Until two years ago, Futaba operated a shop for ceramics and second-hand goods in Kanazawa, Ishikawa Prefecture.

Futaba is originally from the neighbouring Toyama Prefecture. While attending university, she became interested in working as a food coordinator (a certifiable position in Japan that combines menu creation with interior design and even publication). After graduating, she entered a training school for food coordination in Tokyo. Because of her own parents’ love of interior design and artwork, Japanese craftwork was also close to her heart. And during her part-time work in Tokyo, a desire to open her own shop took shape.

“I was working at a coffee shop in Kagurazaka called ‘Pow-wow.’ The owner’s wife was a potter with a gallery on the second floor. The shop was old-fashioned with cigarette stains on the walls and well-worn dishes with chips on the edges. In the way, these things had accumulated over time and use, and in how the appearance had changed, I thought there was a kind of beauty. I could see all kinds of ceramic pieces every day, and I felt inspired.” 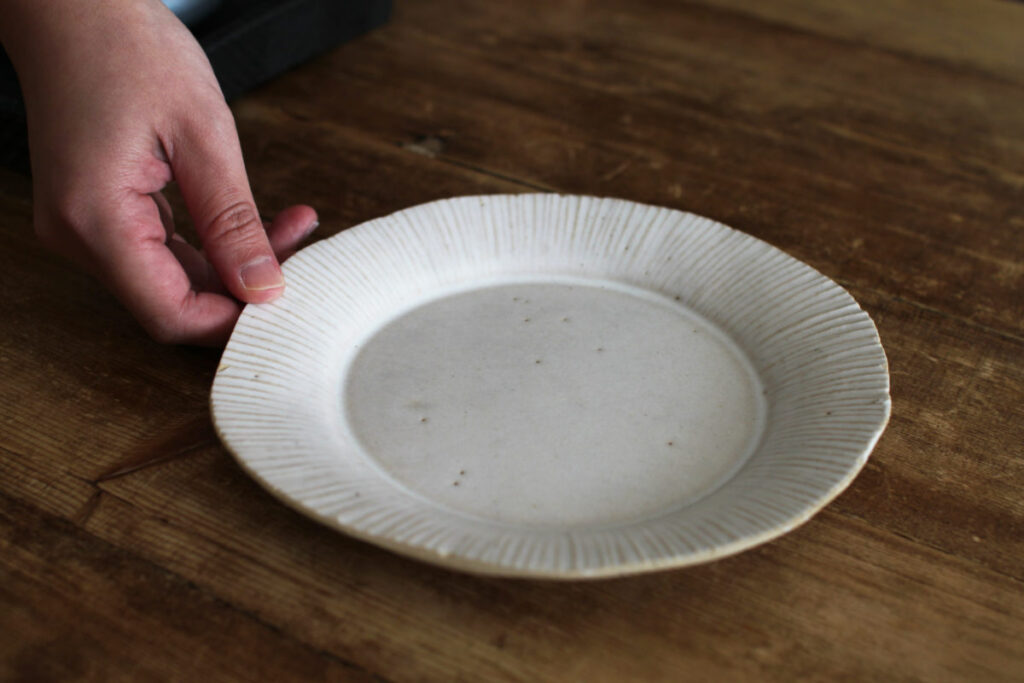 Masanobu Ando’s plates were given to him as a “testimonial” when the shop closed. The rim of the plates are slightly chipped after years of use. It is a dish that has remained with her even after she moved to new homes.

In her shop of only about 30 square meters were rows and rows of a variety of pieces: antiques, curios, contemporary works, even imported pieces from Africa. The common thread among them all was simply that Futaba had chosen them. This small but dense space may not have been easily categorized, yet pottery and antique lovers from all over Japan would come to visit.

“Because it was a shop with many different kinds of vessels, customers would often debate as to whether something was folk craft or fine art. Many artists also have their own ideas about craftwork and talk to me about them. But nothing of the sort ever struck me. I’m just selecting things as a homemaker, so I only think, ‘This one is lovely!’ or ‘This one would be so nice in my home’.” 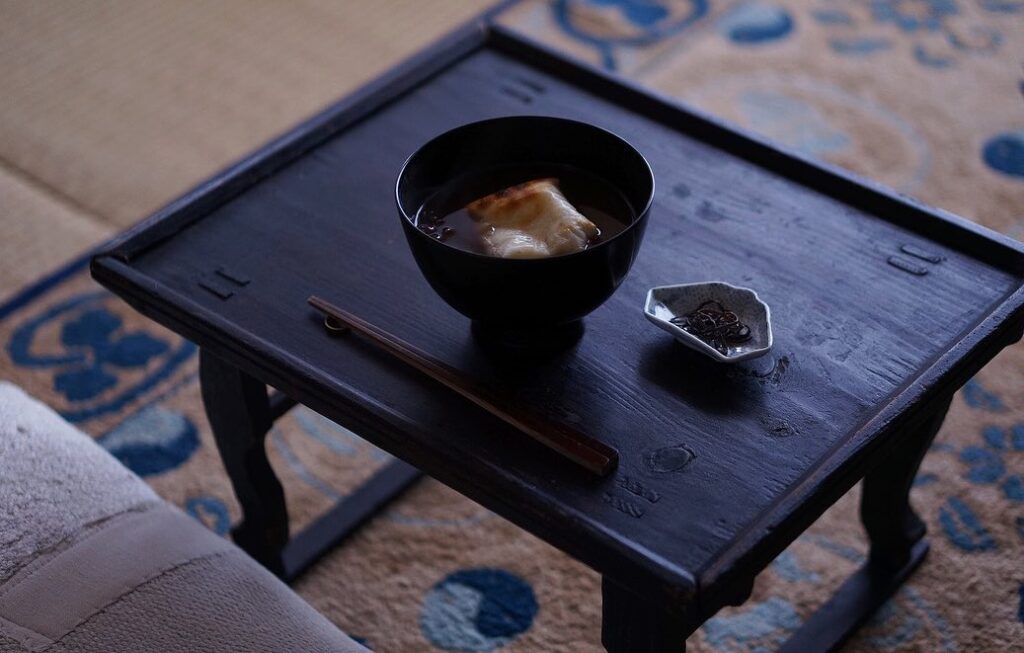 “Tsuzumi Bowl” by Kanazawa-based lacquerware artist Akihiko Sugita, whose works were also available in Futaba’s shop. “I very often handled pieces which I, myself used and which were made by craftsmen I admired.” There were many times I sold works which I used and were made by artisans whom I felt were good. (photo: Futaba)

In 2018, after eight years of running the shop, Futaba closed with only a month’s notice. In the last several years, the store had been frequently featured in national magazines, and its popularity was projected to rise.

But there was no precipitating event that caused the closure. “I just couldn’t keep up with it,” she says.

Beauty can be created through daily living.

A year after closing her shop and becoming a housewife, Futaba started posting videos on YouTube. Her motivation was simple: she wanted to start something new for the month of her birthday. “At first, my friends laughed at the idea,” she says, because she doesn’t fit the stereotypical image of a “YouTuber.” However, in less than a year from her first upload, her channel gained 50,000 subscribers, and she now has one of the highest-subscription Japanese “vlog” channels covering daily life.

Futaba’s videos are most noted for evoking still photography.

“To me, a video is also like a work of art, so I want it to be beautiful as well.” A work of art needn’t only be something tangible like a bowl or a painting. Futaba’s videos demonstrate how to live our lives and how life itself can be a form of expression, something with which we can create beauty.

“It seems that a lot of people watch the videos in the evening or so, when they have a break from housework.”

It’s no wonder to me that there are many comments on how relaxing the videos are. The subtle sputter of rice cooking, the smooth motion of hands cleaning… There is a sense of comfort in the simple, unhurried household duties, as if watching a river flowing or the sun shining through trees.

Surprisingly, however, Futaba reveals, “Cooking and cleaning are not my forte. “Completed chores are only semi-permanent, and there was a period of a lot of trial and error when I was trying to figure out how to overcome it. I even bought books on how to save time and money, but nothing stuck. [Laughter.] Instead, I found ways to incorporate a Zen philosophy into my daily life.

“I try to treat my things as if they have a life of their own. When you think of something as alive, you treat it more carefully and cleanly, and the room naturally becomes tidy. Of course, if you don’t like your things, you won’t treat them this way, which is why it’s important to keep only the things you really enjoy having rather than focusing on the number of them,” she says. 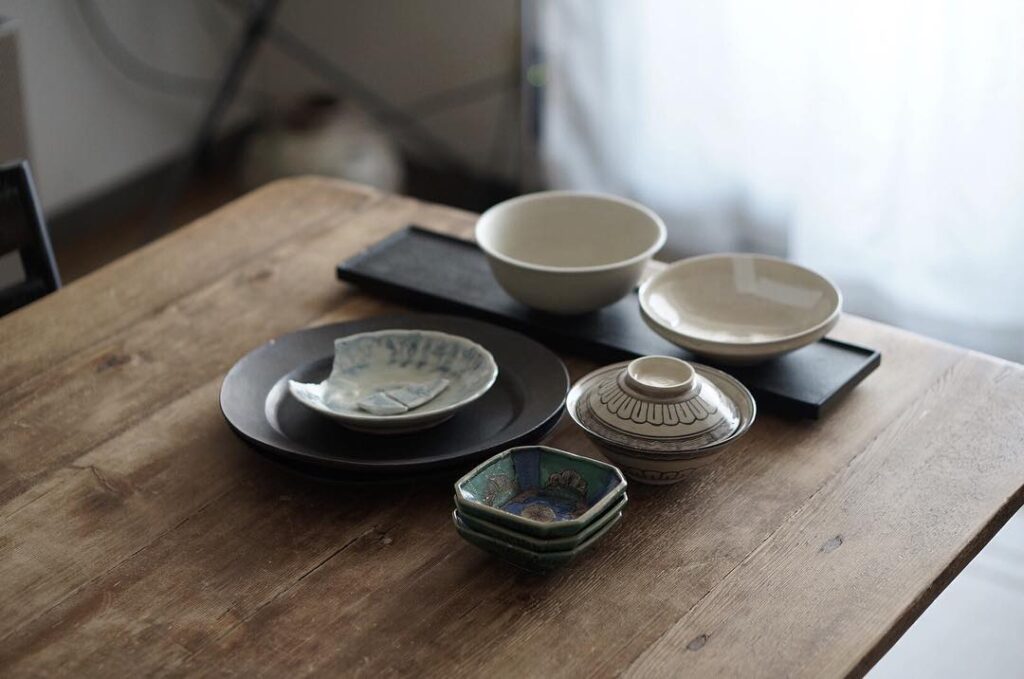 Even broken objects are treated with kintsugi [lacquer and gold resealing] and carefully maintained. (photo: Futaba)

“I’d visited Eihei-ji Temple a few years ago, and I think that influenced me. Meal preparation is the duty of a high-ranking Tenzo [monastery chef] there. Cooking and cleaning let us confront ourselves, and so, rather than trying to save time, I’m willing to put my heart into it.” 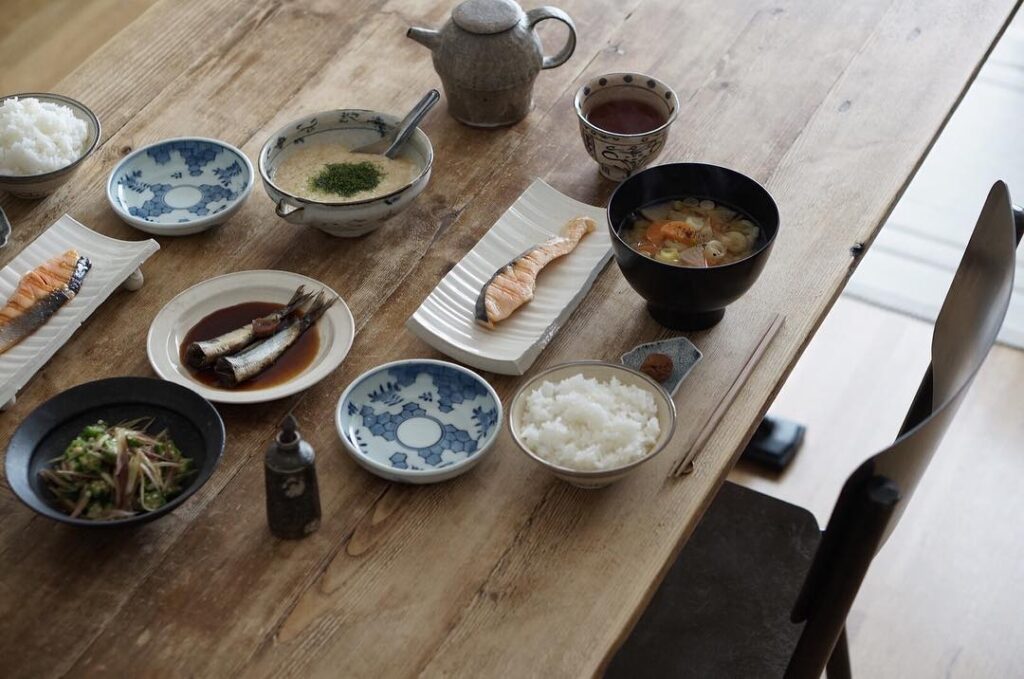 A breakfast scene at home, where antiques and artist’s vessels blend in casually. (photo: Futaba)

Welcoming each other’s choices in our daily life

Futaba recounts an exchange she once witnessed in her store. “A married couple comes in and the wife happily says, ‘I love this dish!’ but her husband objects, ‘We don’t need it.’ Of course, everyone’s priorities are different, and you certainly don’t have to buy something. But she’d seemed so happy, it felt sad to deny her the pleasure of it.

“It’s a common interaction between couples. I feel like ‘We don’t need it’ has the nuance of ‘It’s a useless thing.’

“When my husband buys something after careful consideration, it makes me as happy as if I bought it myself. We have a new favourite item in the house!” she laughs. If you value the joy you take from your own things, you can empathize with the joy of others. If we let the spark in our hearts fade to apathy, what exactly are we trying to achieve? I pondered over a cup of meticulously brewed tea.

Futaba was born in Toyama Prefecture and attended high school in Kanazawa, Ishikawa Prefecture. While at university, she became interested in food coordination and then attended a training school in Tokyo. In 2010, at the age of 26, she returned to the Hokuriku region to open a ceramics and antique shop in Kanazawa. After closing shop in 2018, she began sharing her home life on YouTube. Her book, Jibun no Kigen ha “Kaji” de Toru (Making Your Mood by Keeping House), is published through Shufu no Tomo. You can follow at @lesmoules___ and watch her on YouTube.

This story comes from our partners Go for Kogei

Wakana Yanagida was born in Kurobe City, Toyama Prefecture in 1988. She graduated from the University of Toyama Faculty of Art and Design’s Cultural Management Course. After working as an editor for a local magazine, she now manages the local media magazine, “real local金沢” through ENN and Kanazawa R Real Estate co., ltd.

We have a once-in-five-year campaign to re-build our website. Your support would be gratefully appreciated here.