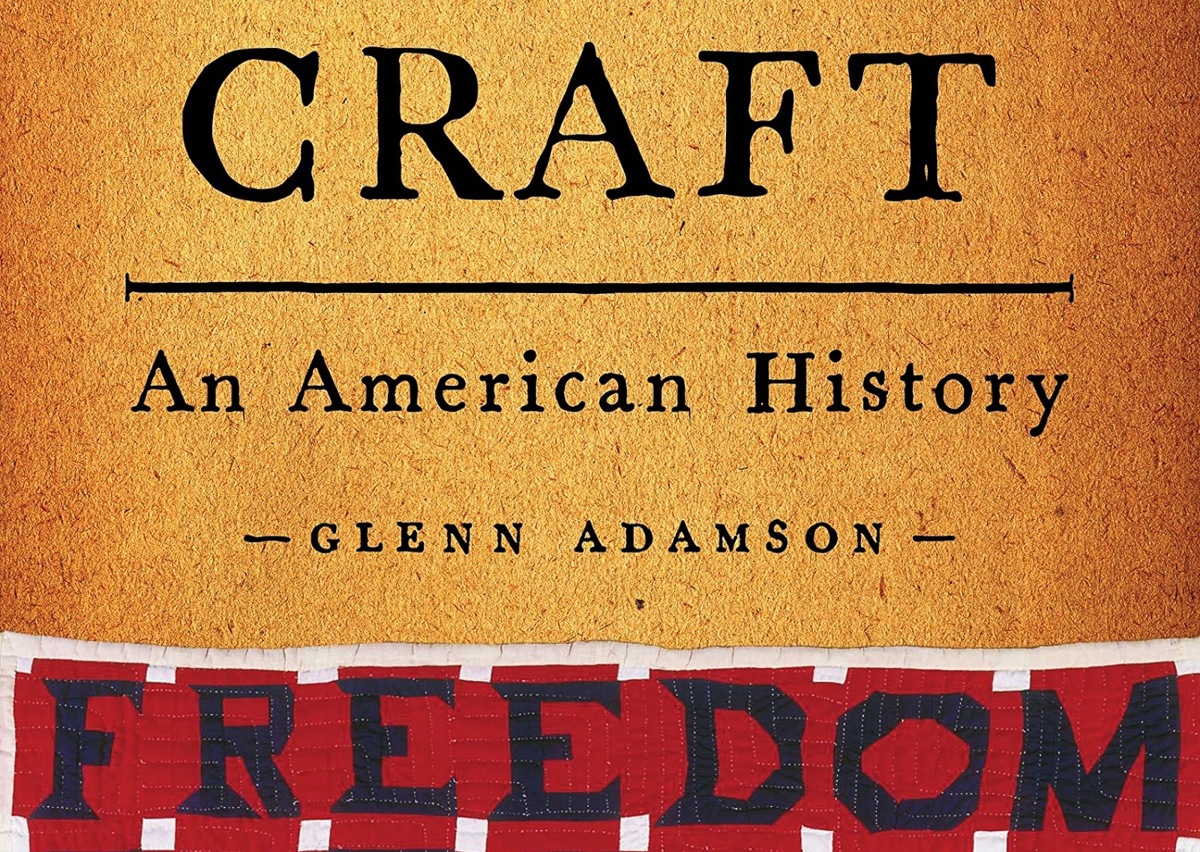 Kevin Murray finds Glenn Adamson’s new book about the USA to be a valuable addition to the global library of national craft histories.

There have been a number of significant publications that sought to tell the story of craft’s development as an artistic field. These include Grace Cochrane’s epic The Crafts Movement in Australia: A History (1992), Tanya Harrod’s opus The Crafts in Britain in the 20th Century (1999), and Koplov and Metcalf’s Makers: A History of American Studio Craft (2010). These books play a critical role in constituting craft as an artistic field.

But recently there has been a new generation of histories that seek to tell a social history of craft within a broader national context. Damian Skinner and I attempted to do that in Place and Adornment (2014) by contextualising contemporary jewellery in an antipodean settler context. Building on this, Crafting Aotearoa (2019) offered an expansive story of New Zealand craft in a mosaic of Moana and Pakeha cultures. Now Glenn Adamson re-writes the craft history of the USA into its foundational national narrative of the struggle for freedom.

It’s a complex story. On the one hand, craft appears to be a natural component of the republican ideals, embodying self-reliance. Hamilton, Jefferson, Franklin, Emerson and Thoreau all saw the artisan within an individualist ethic.

Yet, the contribution of craft was muted by rampant capitalism that championed a more pragmatic entrepreneurialism. This led to the rise of Taylorism which deconstructed any cluster of craft skills that was still left into mechanised actions within factory settings.

Despite this, craft remained a national ideal, albeit more symbolic than real. Adamson quotes a journalist reflecting on Henry Ford’s museum of Americana at Dearborn: “It was a strange sensation to pass old wagons while walking with one who had rendered them obsolete.”

Adamson is particularly incisive about the way craft became a fashion for the wealthy. In the States, the Arts and Crafts movement was, he writes, “a top-down affair, led by professors rather than provocateurs; socialites rather than socialists.” This is reflected in the studio craft movement which degraded the hobbyism that was thriving in the suburbs. Following this line, craft appears to be an elite ideal that covers up the exploitation of labour at the heart of the capitalist system.

The taint of elitism in craft is the key challenge that Adamson confronts in this history. To find an alternative narrative, he goes back in time to write craft into key moments that epitomise the United States as a theatre of the struggle for justice and civil rights.

This includes the history of slavery, where for figures like Frederick Douglass, craft was a key avenue for the advancement of both bound and freed slaves. For the indigenous communities, though their traditions were often commodified as kitsch souvenirs, craft was a means by which individuals could champion their culture.

Adamson continues this thread to the current day through the craftivist movement of the 21st century and key national events such as the Maker Faire presided by Barack Obama. This appears today in crafts that have a practical value in everyday life, such as the jeans produced by the Raleigh denim factory.

And in a very timely way, Adamson highlights the value of mask-making during the COVID pandemic: “…a nation on lockdown began turning to craft, as if by ancient instinct.”

In the end, Adamson ties craft to a core liberation narrative: “the long march toward freedom and equality”.

While it is beyond the bounds of Adamson’s book, the political story can be placed in a broader global context for full understanding. While at a time of Black Lives Matter, one might see the political as universal, it is not so core in other histories, such as Crafting Aotearoa, where the core narrative is one of cultural revival.

While Adamson is at pains to account for the role of minorities within the USA, we see little mention of influence from beyond its shores, such as Japanese aesthetics in the 1950s or interest in world cultures such as South American crafts in the 1980s. This is evident in the title of the book itself, using the words “An American History” to represent the story of only one of the nations in the two continents. The international edition of Adamson’s book might be better titled, Freedom at Hand: A History of Craft in the USA.

In a country like Australia, it could be argued that craft for minorities is more about an assertion of cultural continuity rather than a story of the suffering they have incurred, though that is just as real. The depiction of victimhood by itself represents Indigenous cultures to a more powerful colonial presence.  That said, the influence from the US of the maker’s movement and initiatives such as Ethical Metalsmiths has helped give craft in Australia a much needed critical edge.

At the moment, politics is the dominant framework for craft, as is the case in many other cultural forms in the USA. A key challenge today is how to acknowledge the key role of politics without it becoming everything. Post-apartheid South Africa faced a similar challenge, which led to the “re-discovery of the ordinary” as a desire to return from the spectacle of political struggle to the issues of everyday life.

Modern politics is antithetical to the past. Liberal politics in particular inclines towards presentism in its negative attitude to older cultures that do not follow current norms.

In the context of a world craft, we can hope for a complementarity of cultures. While the USA is a voice for politics, this co-exists with other voices, such as East Asian for the sacred, Australian Indigenous for land (country), Moana for custom, African for life energy, South American for the public and European for skill (all these voices are open to question). The particular areas of national focus are contestable, as they must be to have a dynamic and critical culture. But it is undeniable that no one national history stands for all the others.

In his ground-breaking work, Adamson has helped prepare the way of understanding craft as a political medium. The project of the Journal of Modern Craft and books like The Invention of Craft (2013) detached craft from its romantic roots so that it could be understood as a product of contemporary interests. Craft: An American History now demonstrates the power of craft to re-write a national history, for good and bad.

But these histories can be written in different ways. Crafting Aotearoa follows a path that diverges from contemporary politics. It adopts a “strategic romanticism” whereby settler and Indigenous cultures converge to a perspective of “the past is in front of us” that finds tradition as a way of connecting time and place. As Léuli Eshrāghi wrote in Journal of Modern Craft:

Focused segments authored by a wide range of knowledge keepers in various Indigenous traditions of the Great Ocean, and also of the European diaspora, are demonstrative of the principle of plurivocality inherent in such an intersectional and interdisciplinary “history of making”.

What we need now are similar craft histories in other parts of the world, especially China, India, southern Africa and Iran that helps us understand its role in navigating a path between the past and the future. We are just beginning.

Harrod, T. (1999) The Crafts in Britain in the 20th Century. Bard Graduate Center for Studies in the Decorative Arts.

Skinner, D. and Murray, K. (2014) Place and adornment: A history of contemporary jewellery in Australia and New Zealand. University of Hawaiʻi Press.