The rise of “craftship”: The Organization of Craft Work: Identities, Meanings, and Materiality

A new anthology follows up Richard Sennett’s The Craftsman by tracking the revival of craft values in contemporary work. 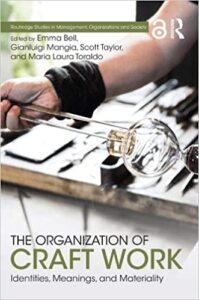 The publication of Richard Sennett’s The Craftsman in 2008 signalled a change in thinking about craft. From a sociological perspective, it broadened craft beyond its place in the arts to being seen as a pervasive and desirable dimension of work more broadly. The kind of care that is expressed in throwing a pot could, therefore, be extended to the writing of software code.

The recent anthology The Organization of Craft Work: Identities, Meanings, and Materiality tracks the growth of this sensibility since Sennett’s book. While it champions craft as an antidote to the alienation produced by capitalist industrialisation, it offers a critical eye to superficial uses of craft in the form of what it terms “Disneyization”.

The book is refreshingly global in its purview. The chapter from Japan by Robin Holt and Yutaka Yamauchi considers how the sushi chef is granted status as “shokunin”, an honorific offered to craft masters. Unsurprisingly, the value of craft is strongly represented in the USA. The chapter by Shelby Solomon and Blake Mathias ties this to patriotism and regionalism, resulting in what it describes as the growth of “plaid collar” work.

Naturally, this book covers the expansion of domestic production through platforms like etsy, particularly in the chapter by Susan Luckman and Jane Andrew. Maria Laura Toraldo, Gianluigi Mangia and Stefano Consiglio offer a more cultural perspective on this by invocking the value of social memory in Neapolitan tie makers. Robert Ott helpfully forges the new gender-neutral term “craftship” to reflect on the “the skill of doing things well by hand” by contrast to the practice of fast fashion as in Zara. This in itself may offer a revision of the gendered nature of The Craftsman.

I found the chapter by Nicola J. Thomas and Doreen Jakob on contemporary English craft guilds particularly interesting. It reflects the tension between a collective organisation and the managerial values that emerge with growth, particularly in the purchase of a building. The erasure of the word “council” from many state craft organisations has enabled a more corporate approach, which seeks growth sometimes at odds with their historical mission. This can offer impressive gains initially, but it is the organic social bonds built over time which offer long-term sustainability. We may well see this borne out in the post-COVID economy.

Given the inexorable rise of craft values, it is curious to note where it meets resistance. Jennifer Smith Maguire notes the absence of “craft wine” as a category, which contrasts with the other chapters on the volume about the success of “craft beer”. The final chapter by Richard K. Blundel draws on the view of Christopher Frayling which is critical of the “myth of the happy artisan”. This prompt us to look more deeply into claims of artisan value.

This is an important addition to the understanding of what craft means in the 21st century. The warm feeling generated by Sennett’s book should certainly make us look carefully at the enduring impact of this turn, to distinguish reality from hope. Richard Ocejo’s book Masters of Craft, for instance, offered a compelling account of young middle-class men who were drawn to manual trades. We have seen little follow up of this trend. We need to consider whether this craft turn has any resonance in the global South, particularly India and China. But hopefully, future studies will continue the critical perspective reflected in The Organization of Craft Work.

In lockdown, a Bulgarian recreates the past
Nikau Hindin ✿ A star compass that makes history
Tangimoe Clay ✿ Crafting the world on a string
Craft Culture in Early Modern Japan: Learning by doing
Reading for pleasure, pleasurable reading
New Spring, Old Gods: Adornment for the people of the bear
Kamunez ✿ How the kiekie girdles Moana
Kan Doenthang: Lost wax to recover a disappearing world