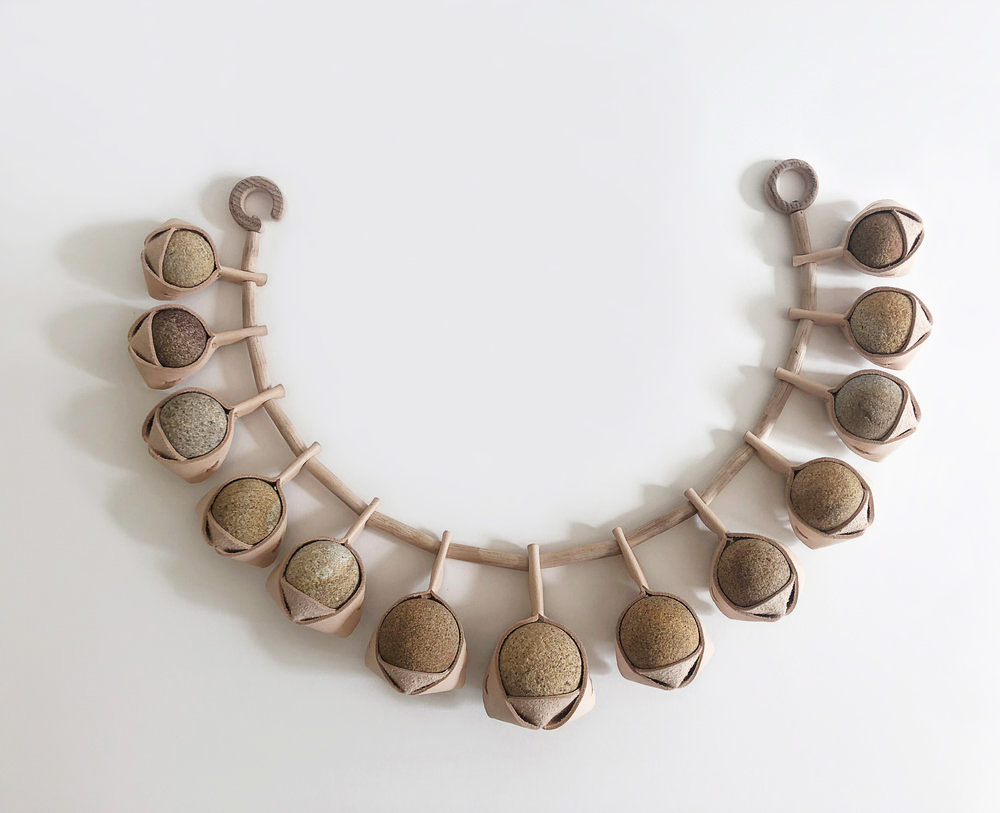 Kyoko Hashimoto’s Musubi necklace is a striking example of how a Japanese craft technique can help us appreciate the local quality of another country, in this case the sandstone that defines the Sydney basin. As she explains…

I regard my role as a maker is to illustrate where things come from, how things are made, and where they go. Take mining for example. We live in a situation in which mined materials that are highly processed and ubiquitous. Mined materials are everywhere in the form of products. They pass through so many hands and permeate the world so much, we are losing a sense of their intimate connection to the earth. Yet, everything is in connection to the earth. Globalisation means most things we own are made in a distant land, by people disconnected from us. This creates a feeling of carelessness. We tend to care less about slave labour and about pollution to the environment if it’s not happening in our own backyard. Some of my work is about revealing these connections; to show where materials are mined and processed, and how they end up in a specific place.

Another aspect of my work is to capture or express my own cultural sensibilities through design. I spent the first ten years in a small fishing village in Japan, and migrated to regional New South Wales in Australia. While the landscape of New England tablelands is no less majestic and awesome than the rocks and mountains of Japan, the displacement and difference in landscape created a question in me about the nature of the material world. The need to answer this question has led to my interest in place-based making and the origin of materials.

Now as a designer thinking critically about place-based making and how we engage with materials for production and their relationship to the land, I decided to cast my focus on the Sydney Basin bioregion. This area of Australia was once part of a massive river system and is made up of a thick layer of sandstone that extends as deep as 6km below the surface. The sand which makes up the land originally washed down from the area around Broken Hill approximately 85 million years ago. Due to its desirable qualities of strength, appearance and carvability, Sydney sandstone was used to build many of the city’s early colonial structures such as the University of Sydney and Victoria Barracks. After winning several international awards in the late 19th Century, and being recognised as one of the most desirable building materials in the world, the demand for Sydney sandstone peaked in the early 20th Century. Huge blocks of sandstone excavated from Sydney quarries were exported to countries including New Zealand, Fiji and as far away as Canada to be turned into public structures. Many of these buildings still stand today. The use of Sydney sandstone became less popular after the 1950s when new, more international materials such as steel-reinforced concrete became the preferred choice of material for construction, and now the use of sandstone is somewhat antiquated. 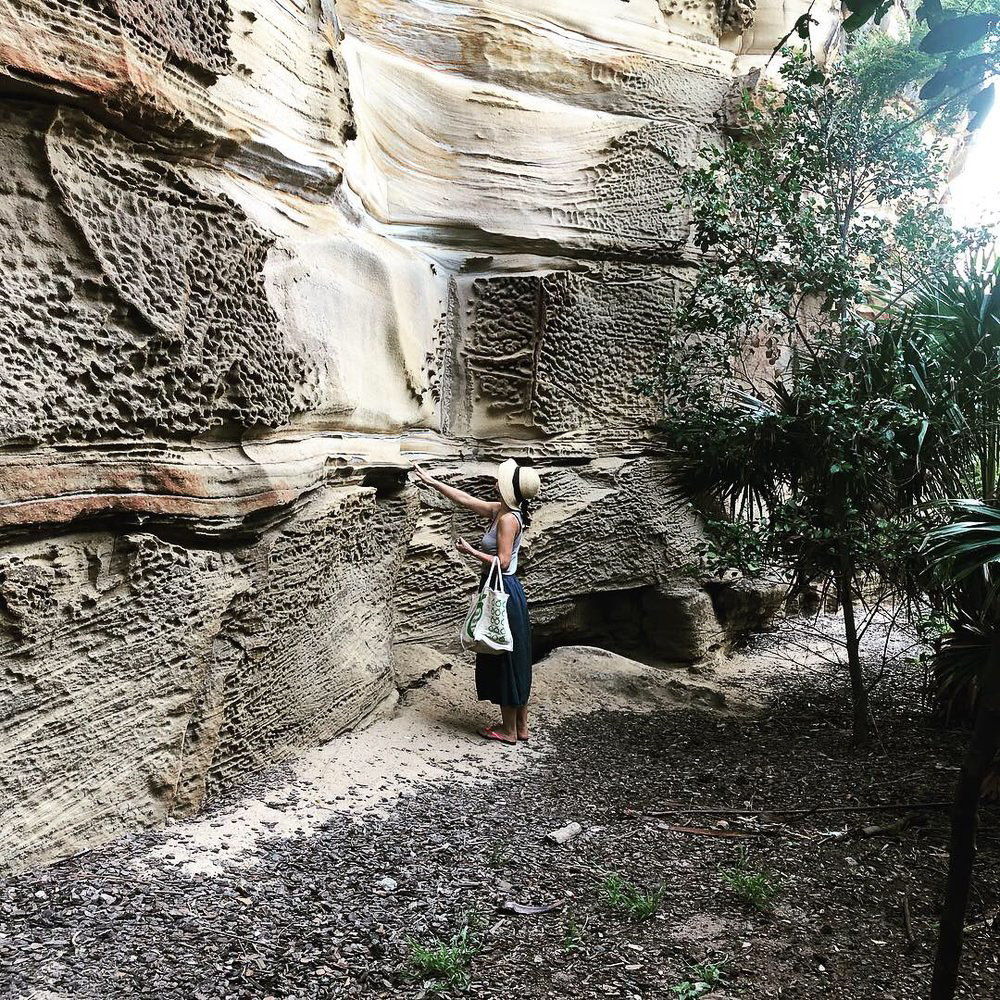 I chose to work with sandstone, for its natural abundance and geo-historical connections to Sydney. As a jeweller, most materials I work with are highly processed and come from a long way away. While sandstone is generally associated with architecture, I wanted to test its capacity as material for jewellery. I collected rocks that had fallen to the ground through natural forces, as well as using pieces of garden rock that I found in our backyard. Once I started looking, I realised sandstone was everywhere. I did a lot of experimentation with the sandstone specimens prior to creating the Sandstone Musubi Neckpiece, as I was unfamiliar with the material. I learnt how to effectively work with the material through trial and error, and by applying various hand and power tools to see how the material reacted. I learnt not only the physical characteristics of the material, but also its range: there is quite a lot of variation between the different stones I collected. Some are hard, especially the stones with high iron contents (which appear reddish-brown), and others are soft and easy to carve (generally pale yellow to light brown). Each of the stones is turned on the lathe into a spherical form, a reoccurring form for me as it references beaded neckpieces, and I like this traditional association. 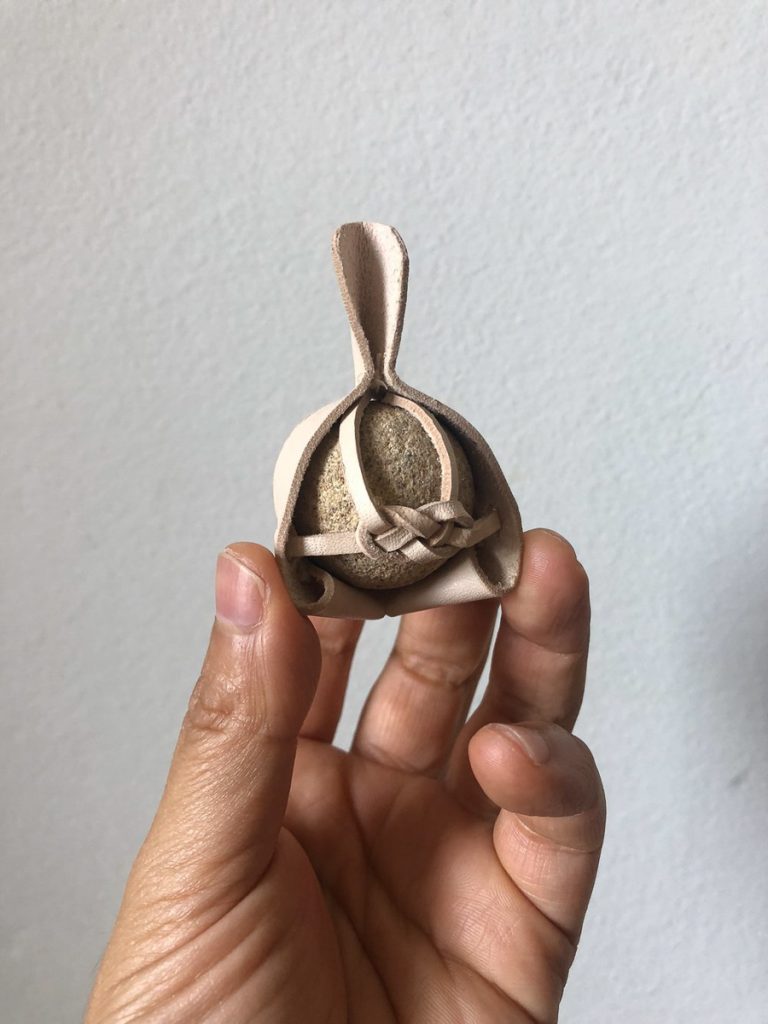 One aspect of the Musubi Neckpiece that took a long time to develop was the leather cradle. I made many prototypes, first in paper, then in a variety of different materials including silicone, rubber, veneer, acrylic and metal. I wanted a solution that suspends the sandstone spheres without having to drill through them. The drilling of the spheres would have been the obvious solution, but it felt somehow cruel and barbaric to me. Especially after researching the rich geological and cultural history of the stone. I wanted a design solution that honoured and respected the material. So I created a cradle out of kangaroo leather that gently wrapped the spheres. Kangaroo leather was chosen for its flexibility and strength, and for expressing a materiality specific to this continent.

Each ball is secured using a Shinto musubi knot. Musubi simply means “to tie together” in Japanese. Various musubi knots are used in Shinto rituals and ceremonies in Japan that mark specific events. For instance, there is a specific knot used to celebrate the birth of a newborn, and a different knot used to celebrate a newlywed. The musubi knot used in the Sandstone Musubi Neckpiece is called awaji musubi. This style of knot is generally applied to commemorative occasions expressed through the up-ward direction of the tail of the knot. It is also a knot that becomes tighter as you pull on the ends, hence is symbolic for the strong bond between people. My expression of the musubi knot is applied to commemorate and to pay tribute to the rich geological and cultural history of sandstone as a unique material specific to this region of the earth.

The embodiment that jewellery can bring is also very powerful. I feel that there is something very significant about an object that allows you to physically interact with and experience a material. Jewellery offers a kind of intimacy that other designed objects can lack. Through the wearing of the object, you embody not just the texture, but its weight; you can sense how it feels against your skin. It can alter the way you move. I feel that this experience can provide a rich sensory awareness of a material.

I would like to acknowledge the Gadigal people of the Eora Nation, the traditional custodians of this land and pay my respects to the Elders both past and present.

More information about Kyoko Hashimoto can be found at www.kyokohashimoto.com. This work features in Sydney Craft Week 2019.