Finding your feet: A communal tapestry in full bloom 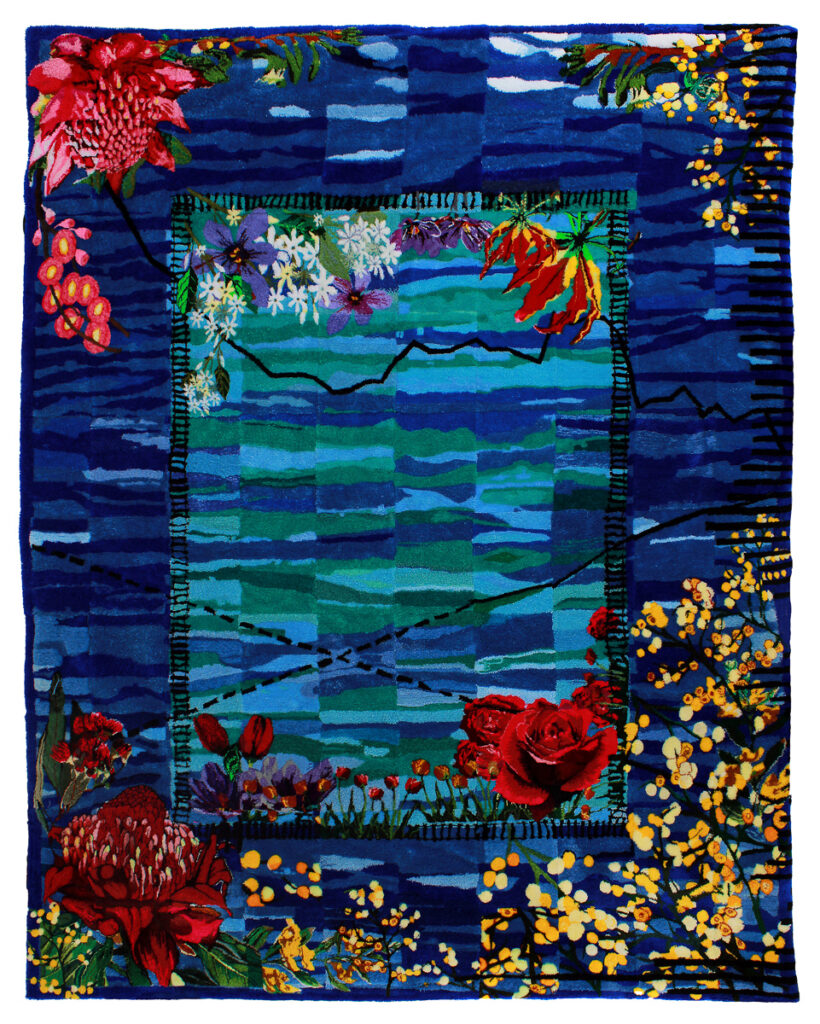 Jane Theau describes a remarkable textile project she coordinated with Afghani refugees Sayd Abdali and Nasaphah Nasaphah, reflecting how craft can bring together people who are pushed apart by the economic system.

The Finding Your Feet rug community art project was developed to help refugees and asylum seekers forge friendships in their new land and catalyse relationships that would make them feel more at home. The goal of the project was not the end product, although that became a beautiful artwork, but what happened in the act of its creation.

For several years, in collaboration with Afghani refugees Sayd Abdali and Nasaphah Nasaphah, I have been facilitating creative projects for the refugee community in Auburn in western Sydney. This journey began because of the disappointment I felt at the way the Australian government and parts of the media were treating and characterising asylum seekers, which prompted me to volunteer with Settlement Services International (SSI). SSI is a not-for-profit organisation that helps asylum seekers with housing, income support and case management. It also buoys up their psychological well-being by providing a social outlet through the fortnightly Community Kitchen at the Auburn Community Centre where newly arrived people can socialise with each other, enjoy the adjacent community garden, dance to their traditional music, play games and participate in art workshops. At the end of the session, everyone shares in a convivial lunch featuring various cuisines prepared by volunteers. 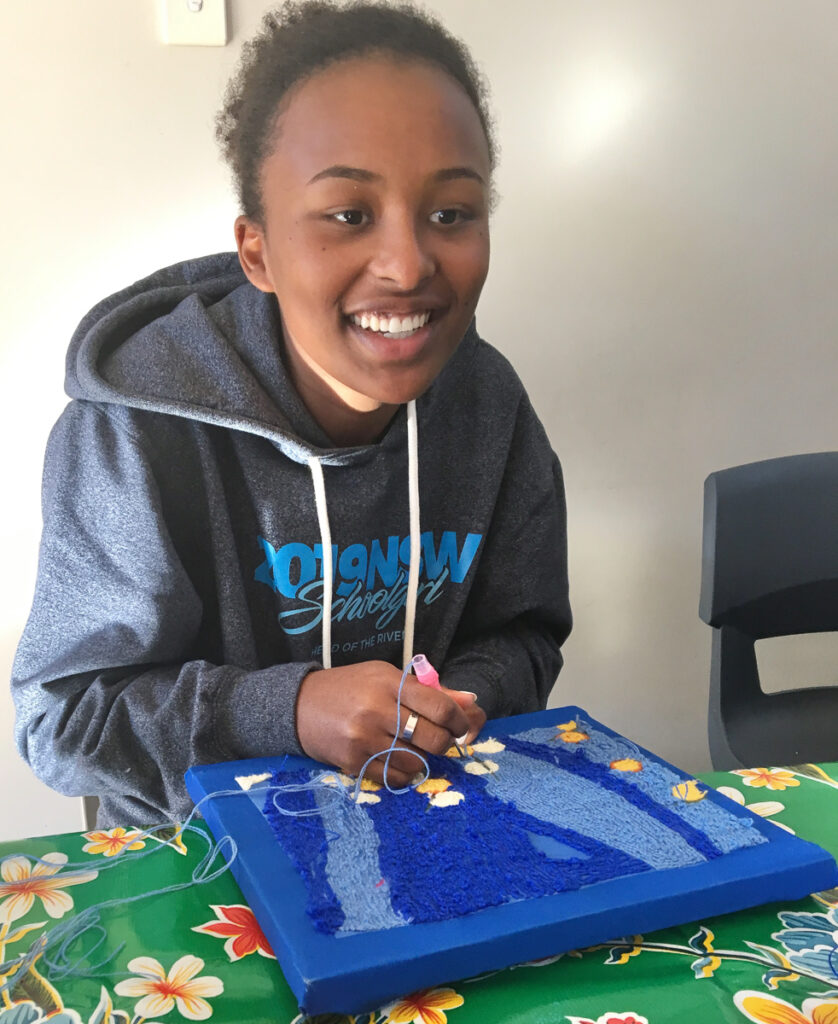 It is to the Community Kitchen that I came in 2015 as an artist-volunteer to conduct textile-related workshops. This is a medium that not only characterises a large part of my practice but is one with which everyone feels comfortable engaging.

I was introduced to Sayd and Nasaphah who are experts in tufting*, a rug-making technique that uses a special needle to punch wool through the back of the fabric to form loops on the front which are trimmed to create a rug pile. It’s a simple technique that is easily learned by adults and children alike. When learning the technique nearly everyone expresses concern that the fibres will come loose from the fabric, as they are not knotted. They are only held together by being very close to each other, standing in solidarity. I find this to be a beautiful metaphor for the Community Kitchen.

The first project we worked on was not in fact the rug, it was a couch that now provides a place to sit comfortably in the foyer of the Auburn Community Centre. The industrial designer Tasman Munro was also a collaborator and driving force behind the creation of this Couch, which is upholstered with tufted fabric covered with images that relate to the wonderful community garden at the Centre like flowers, trees, and people working in the garden.

Sayd, Nasaphah and I formed a strong bond despite my ignorance of Dari and their limited English. From them, I learned a great deal about Afghani food and culture and the reality of their refugee experience (they fled Afghanistan during the Russian occupation and waited nearly 30 years in Iran before being accepted as refugees by Australia.) When the couch was finished, we were keen to continue our collaboration, so we conceived the Finding Your Feet project to create a rug to accompany the couch. 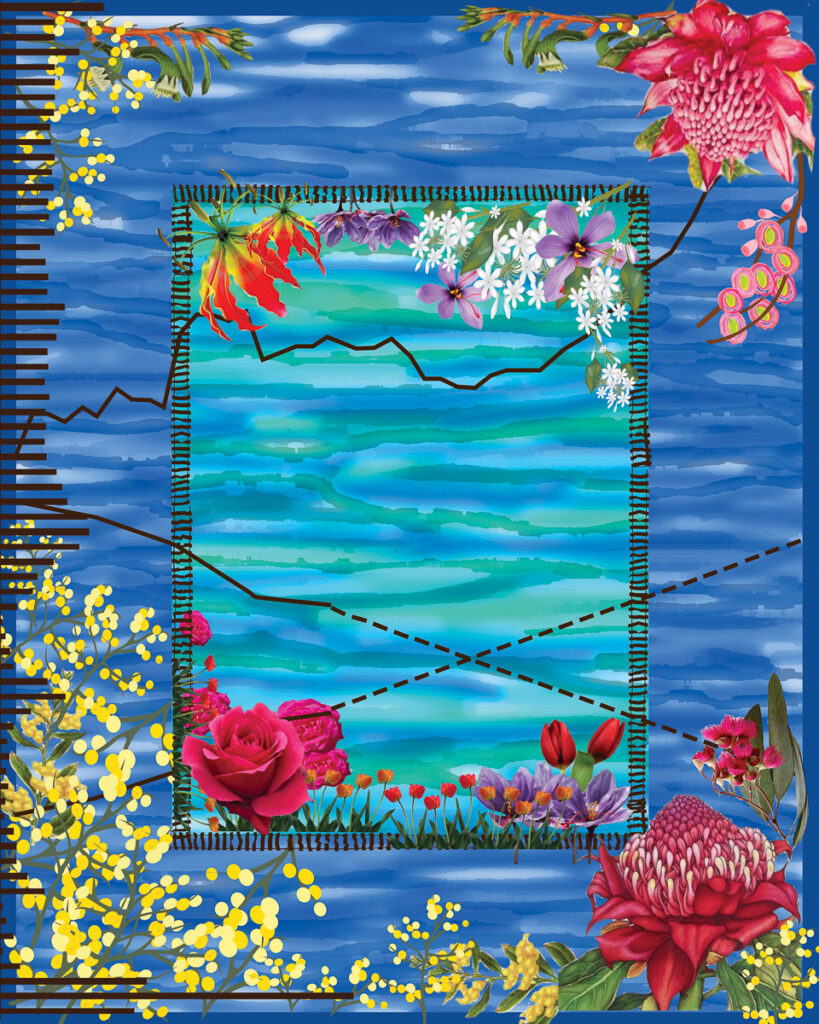 The starting point for the design of the rug was, of course, the refugee community at Auburn. We wanted the design to reflect the refugees’ many countries of origin as well as the one in which they were now making their home, Australia, and we also wanted to tie it in with the garden theme of the Tapestry Couch. To do this we used the universal language of flowers. In keeping with the middle eastern origin of many of the Community Kitchen attendees, the design is structured around a central panel surrounded by a wide border like a classical Persian rug. Australian native flowers garland the border, while the national flowers of the major refugee groups at Auburn occupy the centre. Underlying the flowers is a background of water, reflecting our country that is “girt by sea”.

I personally wanted the design of the rug to have some meaning beyond just being beautiful. To do this I incorporated three graphs into the image. From the bottom to the top of the rug, travelling up one side, is a column graph depicting the number of refugee arrivals in Australia from the end of the Second World War to 2017, representing the history of Australia as a nation that has traditionally welcomed refugees. In the centre of the rug are two intersecting lines, one representing the growth in wealth of the top 1% of the world’s population, the other the concomitant decline in wealth of the bottom 99%. The amount of wealth held by these two groups equalized in 2016 and continues to diverge. The third graph indicates the growth of worldwide inequality between 1950 and 2000 as expressed by the Gini coefficient, a tool used by economists to measure the degree of inequality in a population. These two graphs were included because the rise in global inequality is a key cause of people displacement. 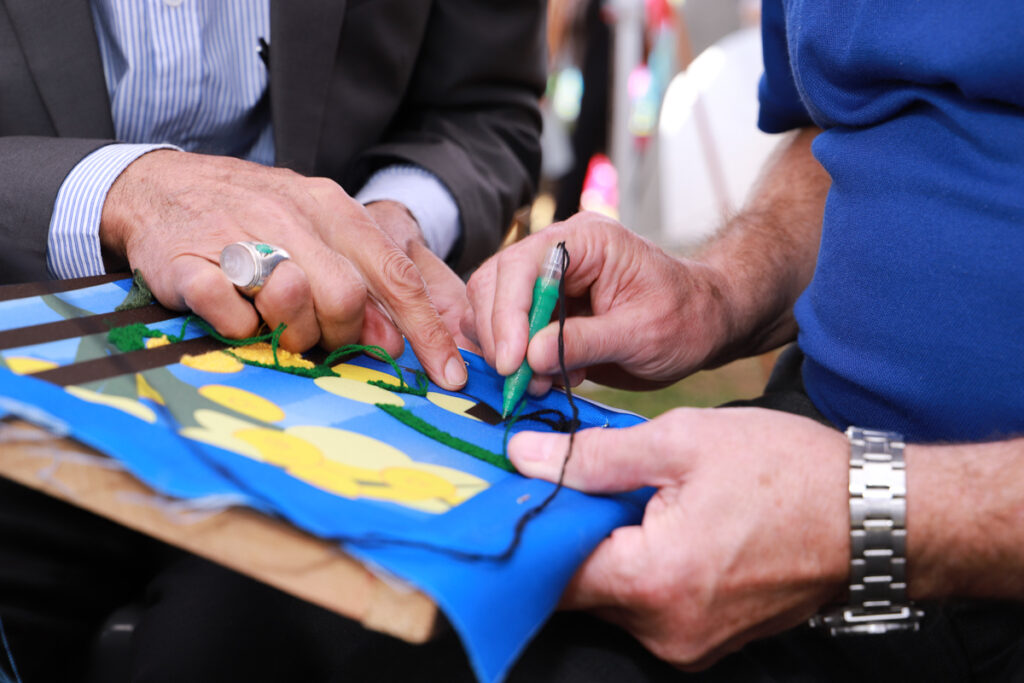 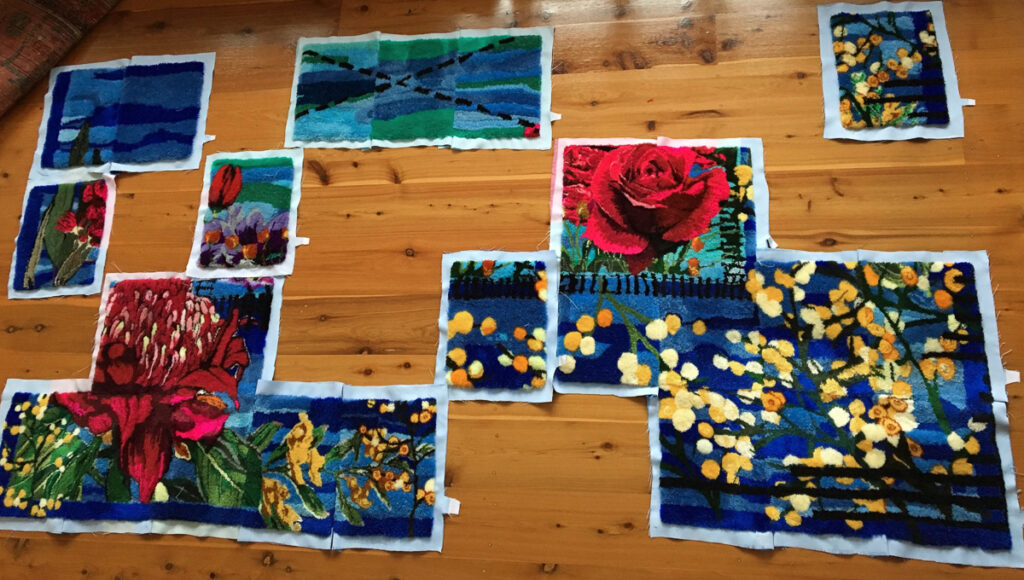 It was our good luck that Nasaphah travelled to Iran to visit relatives before we began the rug and brought back many kilograms of fine one-ply Persian wool in vivid colours. Sayd had made a batch of tufting needles of his own unique design using biros and veterinary syringes. In the meantime, I had finalised the design and had it printed onto a hundred A4 sized fabric panels.

And so began the making. Hundreds of people from Syria, Sri Lanka, Myanmar, Iraq, Iran, Afghanistan, Rwanda, Australia, England, Nepal, Sudan and many other nations patiently sat with Sayd, Nasaphah and me to create the rug, slowly and steadily, stitch by stitch. Most communication around the table took place through hand gestures, smiles and eye contact. Messy work was celebrated as much as refined skill, for this is a technique that is very forgiving, and mistakes are lost in the rug pile. Some participants completed just a centimetre or two, others completed whole panels.

Men and women of all ages contributed and while they worked, they shared their stories with us and with each other: stories about their far-away homes, what forced them to flee, and their harrowing journeys. Participants also related joyful stories of textile experiences with mothers and fathers, grandmothers and grandfathers in their homeland. Many participants returned to the Community Kitchen with their own embroidered, knitted and crocheted work to show us, and seeing the skills they have brought from their home countries emphasized to me their loss in our own culture.

Finding Your Feet was featured in an exhibition at the Australian National Maritime Museum in Sydney in January, Motherland – Exile/Refuge – Migration (repeat). This work of art that was made by hundreds of asylum seekers and the community members who welcomed them is a material manifestation of the makers’ hopes and dreams. It is hoped it will find a permanent home in the future, providing a metaphorical welcome mat for all those who are finding their feet in a new land. 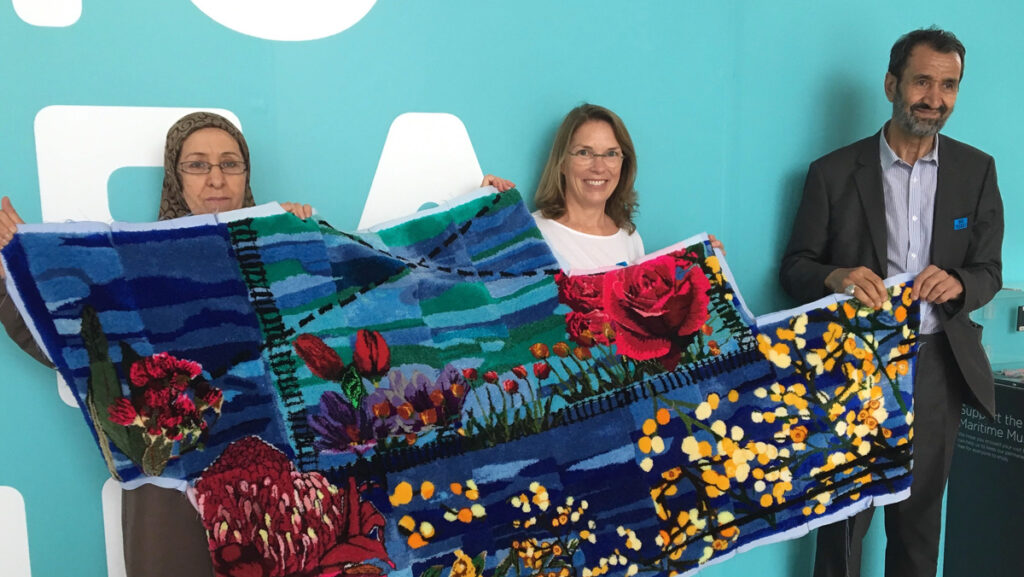 Thanks to Tamsin Sahelian, Stephanie, Judy Embry and Margaret … for their support, and to Settlement Services International and Auburn Community Centre for hosting the project

Simone Fraser ✿ Re-gendering ritual
What will be the new flower?
Galeecha: Cultural Textiles Design
Hanoia ✿ Vietnamese history in lacquer
Nicole Robins ✿ It's all in the loop
Sydney - A City on the Make
Kevin Diallo ✿ Ode to Zouglou
Judy Nolan ✿ A knitted revenge on wordiness