Phad painting: On the 150th anniversary of Gandhi’s birthday 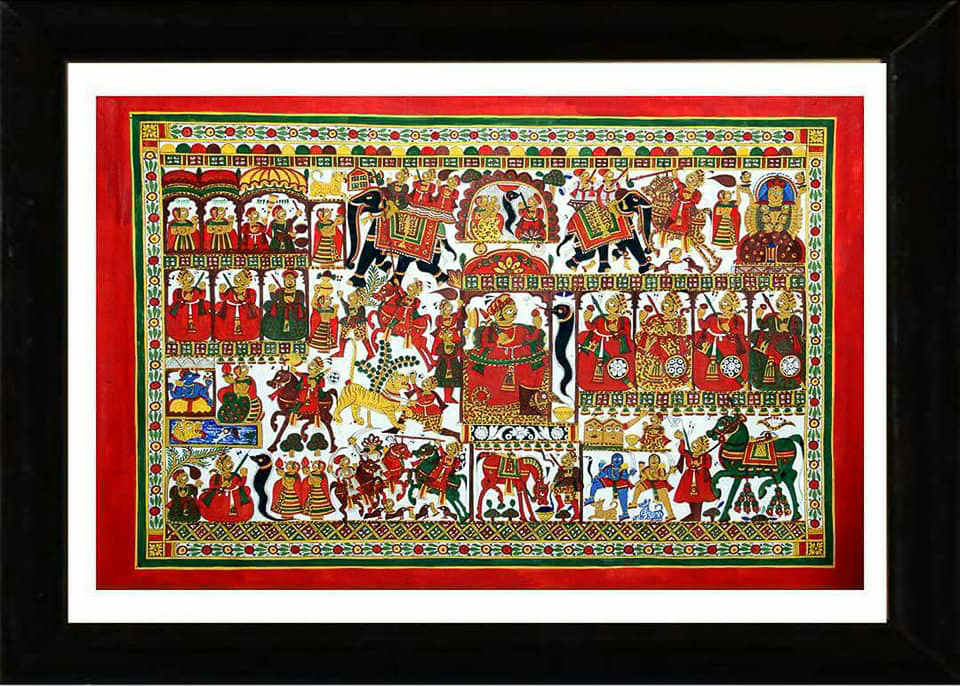 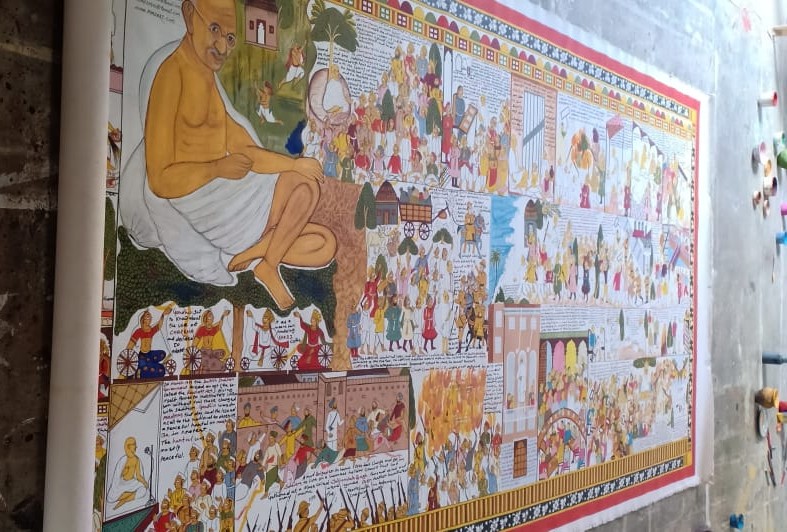 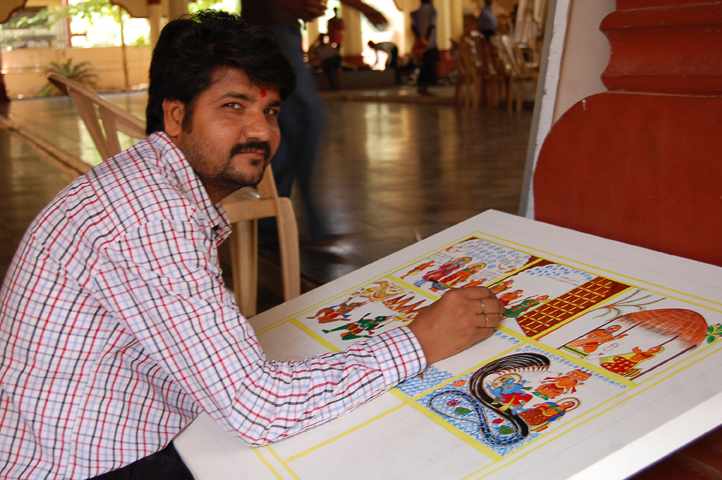 On the occasion of the 150th anniversary of Mahatma Gandhi’s birth, we share this project to tell the story of his life in the traditional craft of phad.

Science has proved that visual content is an extremely effective way to communicate because our brain does a great job of processing it. Of all our senses, 90% of the information sent to the brain is visual.

This theory was not new for the people of India. It is not uncommon to hear of India’s cultural marvels, unique local traditions and unmatched contributions to handmade artworks. Yet, only when one goes beyond these fancy-sounding words to really explore India’s splendid heritage is one exposed to how rich our inheritance truly is. One such tradition, born in the land of folklore, Rajasthan, is phad painting. These are large paintings done on cloth that depict stories of the local deities and gods.

Just imagine the time when there were no schools and the stories of the local heroes were the inspirations for the people. I am often amazed when learn about authentic stories behind the age-old tradition. Look at the intelligence of the people during that era. They were already knowing how a human brain functions and on the basis of that they defined a concept in which the nomadic tribes called Bhopas carrying these scrolls with images of local deities and narrating their heroic tales through songs.

The origin of phad painting was in the year 1629 in Phoolia estate jagir, presently Shahpura, which was given to Rajadhiraj Suraj Mal in consideration of his services rendered to the Emperor Shahjahan. Later the capital Phoolia was shifted to the newly settled town named Shahpura in honour of the Emperor Shahjahan. The Joshi family had already initiated and developed this art much earlier to the existence of Shahpura which happened to be one of the Princely States in Rajasthan.

The art is known not only for its vibrant colours but also the fact that it is accompanied by an oral tradition of rendering the gatha (folklore).

Khadi cloth for phad scroll was woven by Koli. The masters of the Brahmin community narrate the story in Shahpura school language that translates the folklores of deities likes Devnarayanji (Incarnation of Lord Vishnu) and Pabuji (Avtaar of Laxman). To prepare the canvas they get the cloth from weavers of Koli community, soak it overnight to thicken the fibres and stiffen the cloth with starch of boiled flour and gum, then it is burnished with moonstone which makes the surface smooth and gives it a sheen. The colours are extracted out of minerals.

The scale of the figures in the painting depicts the social status of the character in the story. What is also interesting is that the figures face each other, not the audience. Bhopas, or bards, are the narrators, singers and dancers who communicate to the audience through the songs, dance and instrumental music. Bhopas use the Ravanhatta, a musical instrument to accompany the songs. Ravanhatta is a fiddle-like instrument and is played with a horsehair bow which has a small bell attached.

During the performance, the performer’s assistance illuminates certain parts of the painting with the oil lamp and performer recounts the epic with the songs and dance to the accompaniment of a musical instrument. The performer serves as a priest by employing the paintings as a mobile shine. After making all arrangements for the performance, the Bhopa begins to sing lura (hymns) to hero God. The recitation and singing continue all night long. The audience, which knows many of the words of the epic, may join the Bhopa in the singing. Just before dawn, the ceremony ends and the Phad is rolled up.

Used in this manner, phad paintings wear out after several years of service. When this happens, the painting is ritually destroyed by immersion in a body of water.

This wonderful form of art is preserved by the Joshi family of Shahpura. Shri Shantilal Joshi, a national award winner had learned it from his forefathers and then taught it to his son Shri Vijay Joshi. This art was not taught to the females of the family to maintain confidentiality, but now they are more open to spread about the technicalities of making a phad.

The generations are narrating unique stories around the present heroes. In 2019, Shri Vijay Joshi has wonderfully narrated a phad on the life history of Mahatma Gandhi from his birth, upbringing, education, work-life, marriage, leadership speeches, etc. to set a milestone. On 2 October 2019, India will celebrate the 150th Birth Anniversary of Mahatma Gandhi. Before putting up the storyline, Vijay travelling across all places connected to Gandhiji for better visualization and presentation of the storyline. I guess he is not less than a scriptwriter, producer, director and more.

I admire the way the Joshi family has adapted themselves by illustrating tales on the subjects or the heroes admired by a larger audience.