Roseanne Bartley ✿ be in touch 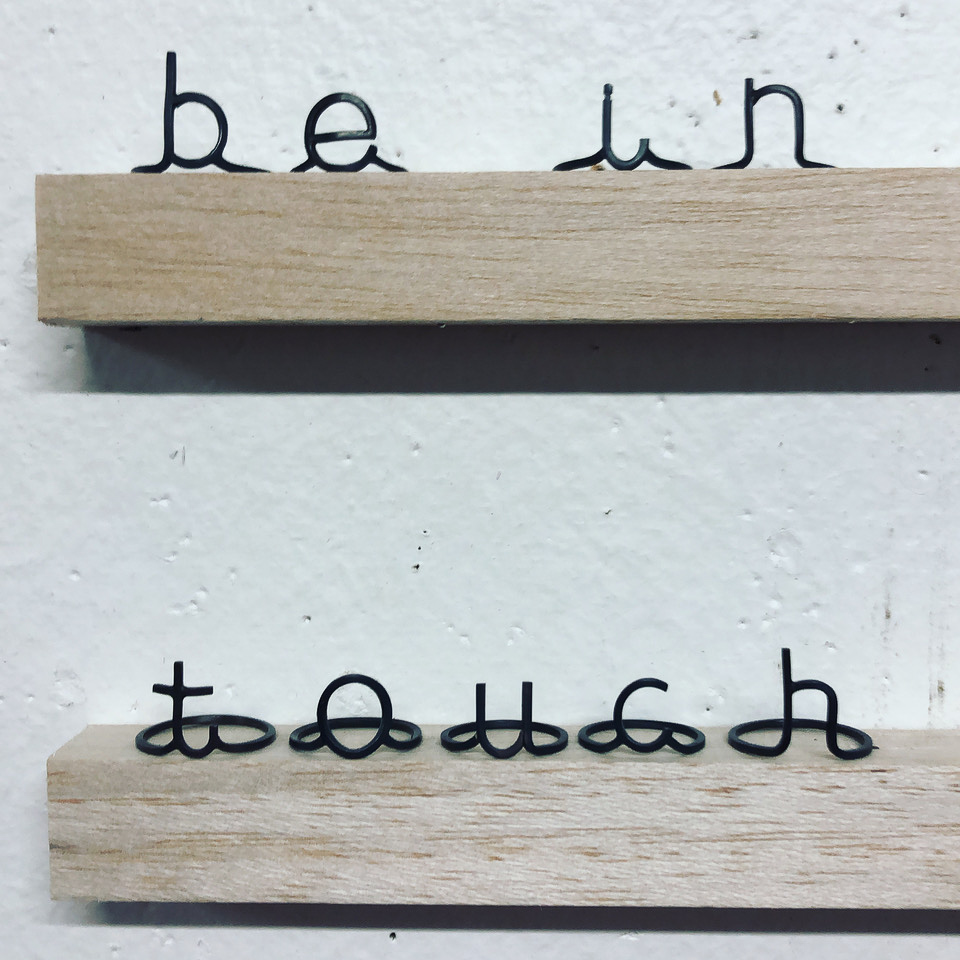 Our August Laurel is awarded to artist-jeweller Roseanne Bartley for a process of making signal rings that embody common thoughts around our current condition.

I began 2020 with the cusp of an idea and sketchy plan for how to proceed. Working in the studio with repurposed silver I drew out a series of fingers ring that spelt the words Make-do. A score, I noted at the time of raging bushfires in our state, for acts of resilience and resourcefulness. These signal-rings, as I initially referred to them, were a play upon the archetypal function of the signet ring and the social protocols of jewellery. Mounted on a strip of roughly hewn timber I readied the composition for installation at the Australian Tapestry Workshop (ATW) gallery, an annual event celebrating their artist residency program. 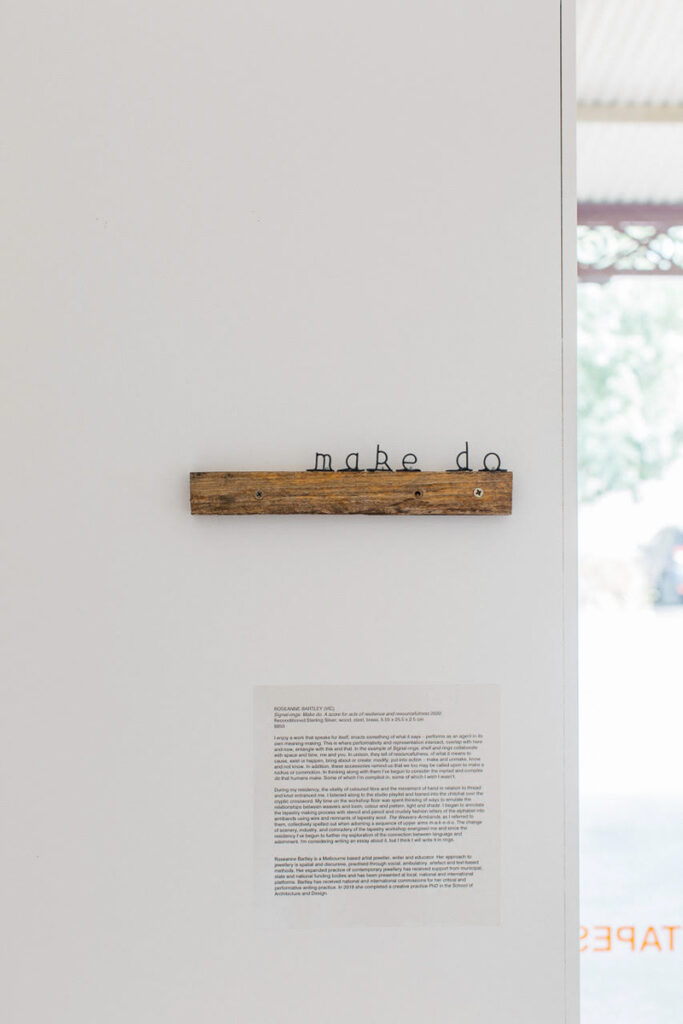 Early in March, I wrote a reflection of the Make-do score:

I enjoy a work that speaks for itself, enacts something of what says, performs as an agent in its own meaning-making. This is where performativity and representation intersect, overlap with here and now, entangle with this and that. In the example of Signal-rings, shelf and rings collaborate with space and time, me and you. In unison, they tell of resourcefulness, of what it means to cause, exist or happen, bring about or create: modify; put-into action – make and unmake, know and not know. In addition, they remind us that we too may be called upon to make a ruckus or a commotion. In following their lead I have been considering the many and varied do that humans make. Some of which I’m complicit in, some of which I wish I wasn’t.

Initially, I found making in the here and now of 2020 had a strange and troubling resonance to it, but the SARS-CoV-2 pandemic was about to make the do that humans make that much more complex. Like many public gatherings the opening to the ATW exhibition was postponed and as we pivoted towards online cultural events, working from home and remote learning, incantations of ‘Make do’ began to oscillate between a calming chant and a sharp directive.

I feel most at ease when my work tells me what to do. It’s rare, however, that the course of action is linear or one-sided. From experience, I’ve learnt to pay attention to habits of action and paths of misdirection. As the first few months of lockdown pass signal-rings gather on my bench and tell of the makings of a daisy chain – pick-split-pick-thread-suspend-repeat …. a sequence of transitive verbs reminiscent of artist Richard Serra’s 1967-68 Verblist. 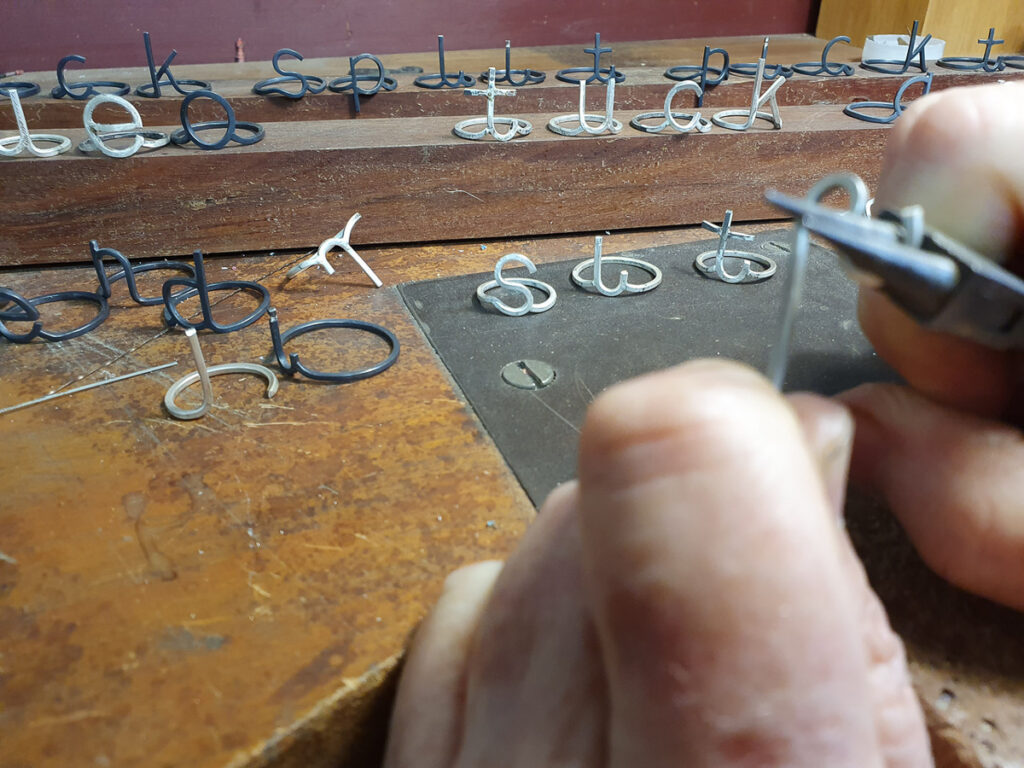 Making these rings is a labour of love. Squared off wire is hand made from vestiges of sterling silver offcuts – melt; pour; cool; roll; anneal; cool; roll – and when reaching the required thickness – snip; bend; cut; file; solder; pickle; emery – then a dip in silver blackener followed by a smearing of beeswax.

Becoming familiar with the form and sequence of each letter takes practice. I favour developing a feeling for each letter over a measured uniformity and technical precision. As in writing by hand, no letter of the alphabet is written exactly the same, they simply correspond, coordinate through the material trace of an embodied action. Funnily enough, I dislike the sensory aspect of writing by hand, but find satisfaction in how the score-rings mobilise an array of hand gestures and bodily sensations; actions that expand and contract, inhale and exhale, synchronise with other human and more than human forces into some kind or orderly disorder.

As the signal-rings tumble about the workshop, from workbench to soldering mat, pickle bath to mandrel, seemingly random but topical compositions emerge.

Towards the end of May, I celebrate the news that our collective effort has had some effect on flattening the curve of viral transmission. My delight in the success of this civic action is short-lived, shattered by the violent death of George Floyd in the custody of police in Minneapolis. Assisted by the signal-rings I post a score pulse-breath-repeat – on my Instagram feed accompanied by #nomoreblackdeathsincustody. This score-ring, as I call it, is one socially distanced method by which I register my support of the Black Lives Matter movement. A few weeks later as we enter stage 3 lockdown for the second time I reflect on the social and material effects of becoming with the pandemic. I post the score-ring be-in-touch with the hashtag #isoscore.

I follow a number of artists who post regular updates on their work and engage with their followers with commitment, the enthusiasm of which I’m less inclined or able to replicate. Though sporadic my experience of posting the scores encouraged me to rethink the spatial and social potential of social media during extended periods of social distancing. Activating Instagram as a temporal site of publication has been useful in sustaining the thinking doing of my practice during lockdown, as well as providing an effective platform to interface with wider social and political concerns.

Roseanne Bartley can be found at @roseannebartley