We need a “Great Addition Theory”: A response to Christchurch 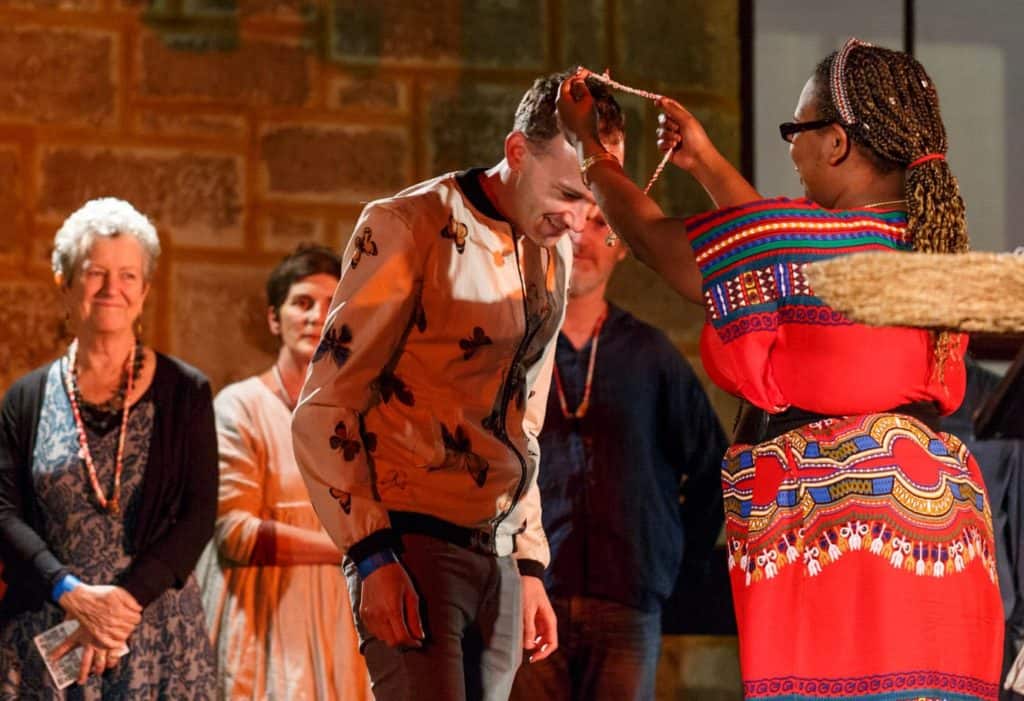 Rafeif Ismail garlanding writer Andrew Nichols at the launch of the Kaya issue in Fremantle, February 2018

The sun sets over the Indian Ocean, bathing Fremantle Arts Centre in an orange glow. After Matthew McGuire’s stirring Noongar song, local Sudanese author Rafeif Ismail bestows garlands on the contributors to our Kaya issue. These strings of local seeds were made by the matriarch of fibre, Nalda Searles. It’s a scene you want to bottle as a tonic for the darker moments that follow.

The massacre in Christchurch has revealed a grave threat to our communities. All of a sudden, we’ve discovered a generation of young men who are seeking a violent reversal of cultural co-existence that has grown with successive generations of migration. Understandably, the government response has been focused on blocking this Alt-Right insurgence. Countermeasures include stricter gun controls and more effective banning of hate speech on social media.

But for many lost young males, this blocking will only add to the excitement. Their sense of victimhood confirmed, they will be drawn more deeply into secret channels and underground conspiracies.

As Guy Rundle argues, behind the ugly troll is “a perfectly consistent worldview”. Besides building walls, we need also to confront the intellectual framework that underpins their beliefs. We have since learnt that the murderer subscribed to the Great Replacement Theory of French thinker, Renaud Camus. According to this doctrine, the West faces a threat from Eastern cultures such as Islam. The killing of at least 50 people peacefully praying in a mosque was designed to “accelerate” the confrontation with the “invaders”.

At the heart of Alt-Right is a principle that cultural contact is a zero-sum game. It’s us or them. Every foreign word or traditional practice or gene diminishes the host culture.

There is a strain in Western culture that reinforces this binary model. This is evident most dramatically in the series of medieval crusades against distant infidels, and more pervasively in the divine licence to dominate nature, which now seems to be expiring as a result. But seeing the West as total evil just perpetuates this agonistic thinking. It’s also bemusing to other cultures who find positive aspects in Western civilisation to draw on, such as the enduring institutions of learning and arts. Western culture is itself hybrid. The Western tradition has grown considerably thanks to the influence of foreign cultures, notably the Middle Eastern religious cult at its foundation—Christianity.

In the course of modernity, “Western influence” has been seen as a positive development in foreign cultures. The export of features such as “democracy”, Shakespeare and feminism are seen as strengthening its recipients. By that token, it is perfectly possible for the West to be rejuvenated with Eastern influence.

The Alt-Right draws on a realisation that the West is losing its preeminence. Part of this is due to flaws in the West itself, such as increasingly escapist culture and obsession with individual freedom at the expense of common good. Rather than respond to this by hitting out against what are perceived to be more successful cultures, we should welcome the kind of foreign influence that can add the strength that is needed. There’s a lesson to be learnt from the more holistic “win-win” attitude of the Chinese. As the success of Marie Kondo showed, our lives can be improved by a Japanese attention to ritual in daily life. I’m sure you can think of many other cultural imports that can add to rather than replace our way of life.

No culture is complete to itself. Given the plenitude of existence, any one cultural system is capable of reflecting only a part of life. We see this in the way cultures grow alongside each other. Across the channel, the pragmatic English need to import French champagne if they are to do something useless like toasting success.

Of course, there are many successful symbols of cultural “addition”, such as South Africa’s Rainbow Nation and Australian Multiculturalism. But these inevitably fade over time as they become institutionalised and become just more boxes to tick. We need new symbols, practices and even “memes” to win back lost minds.

We need a more nuanced understanding of appropriation. How do we respect the creators and custodians of cultural practices while also allowing them to be share in foreign contexts? There’s important work to be done.

Here, the Garland project is to bring writers and arts together across the Indo-Pacific in a conversation about the value of what we make. As this evolves, important values have been shared, such as the Tongan belief in putting the past “in front of us”, the Zapotec practice of “crafting kinship” and the Aboriginal Jirrbal approach of partnership with nature. There is great potential here to revive a positive belief in “addition” through dialogue.

This is not a recent postmodern trend. The foundation of Western culture is typically located in Ancient Greece, where we find the origins of our philosophy and politics. As the key thinker of this period, Socrates is often quoted “I know nothing except the fact of my ignorance.” Today more than ever, we need to know our ignorance.

The Garland itself is an additive object, as petals are threaded on a length of string. But the bestowal of the garland entails bowing our head to accept this gift. This is certainly a gesture we need to practice in our morning yoga routine.

You are invited to use this platform as a forum to share inspiring cultural works that give beauty and meaning to our lives. Please find here a source of hope and solidarity. Help us spread this dialogue to those that need it. Your thoughts on how we can construct a “great addition theory” are most welcome.