Garland was launched in Ōtautahi Christchurch with the exhibition Warp & Weft at Dilana Rugs and curated by Audrey Baldwin. It featured extraordinary textile-related works from artists in Aotearoa New Zealand. We’d like to share a selection of those works with you. 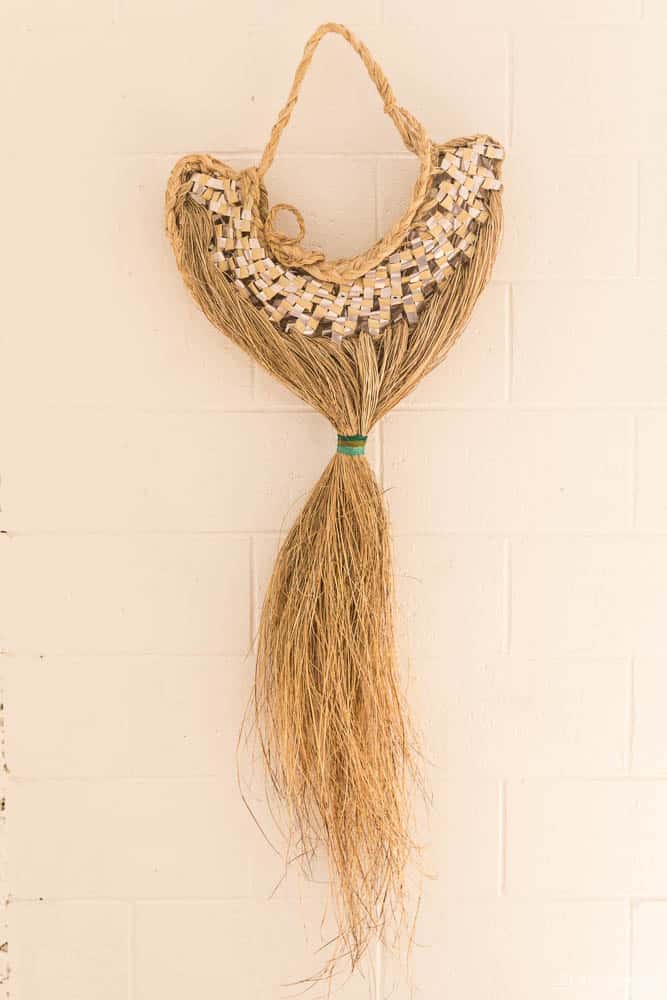 Mandy Cherry Joass graduated from the University of Canterbury with a BFA in sculpture in 2015. She often uses raranga (weaving) as a metaphor to explore themes relating to postcolonial identity. East coast elder Apirana Ngata explained Whakapapa as ‘the process of laying one thing upon another’. The oppositional direction of warp and weft combine individual strands to create a fabric, larger and stronger than the separate elements.

Joass is adding to and expanding on traditional Māori imagery, techniques and materials which, when woven together, form the fabric of a bicultural society. She is a descendant of the first European settlers to arrive in New Zealand and also of Ngapuhi Whakapapa, and she expresses her biculturalism through her work. Joass explains that the contrasts and tensions created by using disparate materials represents the complex interweaving of cultures.

Following in the footsteps of her Kuia, Cherry Joass and great Kuia Cecily Ruby Mcmanus, Joass seeks to preserve and perpetuate all things Matarangi Māori in an inclusive and lighthearted way.

Prouda combines harakeke with aluminum, old with new, Kete with couture handbag. The wild fringe is bound tightly with embroidery silk and cotton both corseting and restricting its full expression. Prouda is part of a growing collection of abstract and figurative woven objects I am making as an enigmatic expression of cultural melding. 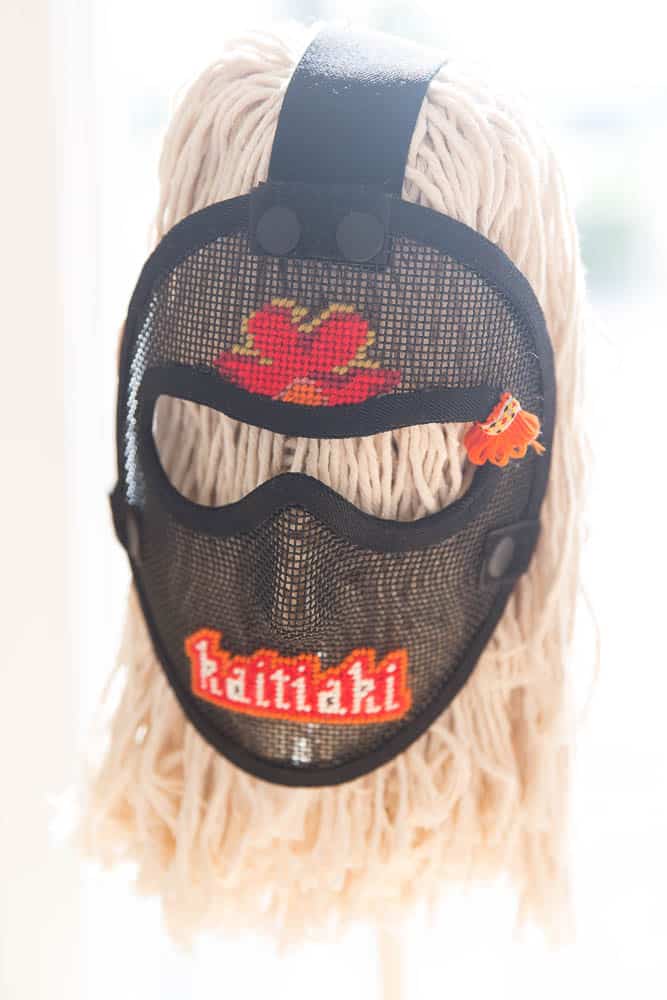 Margaret Lewis is a contemporary textile artist using traditional crafting techniques (knitting, crochet, embroidery, macrame) and re- contextualising them by her use of unexpected materials. Self-taught, her practice could be described as ‘making a silk-purse out of a sow’s ear’, in that her works use easily found (and often discarded) items as her canvas. Originally designing handcrafted fashion her practice changed focus after many of her works (and materials) were destroyed in a fire in 2013. Since then her works have been exhibited at the Waikato Museum, Auckland War Memorial Museum, Splore and ACL Festivals, as well as NZ Sculpture OnShore. She has spoken at UK Conference ‘Making Futures’, CTANZ Fibre Connecting People Symposium and also the CCD Summit Aotearoa.

Focussed on re-contextualising craft, Lewis takes stitchcraft from the traditional to the contemporary in its use of non-traditional materials (paintball masks to protect protestors, chicken wire to stitch a fence, sifters and sieves to stitch contemporary samplers and vintage racquets to volleying a conversation) to make social observation and commentary. Lewis sees her role as an artist and producer is to bridge aesthetics, explore the application of innovative materials, champion excellence in making and to engage different communities in the creation of unique art-works. 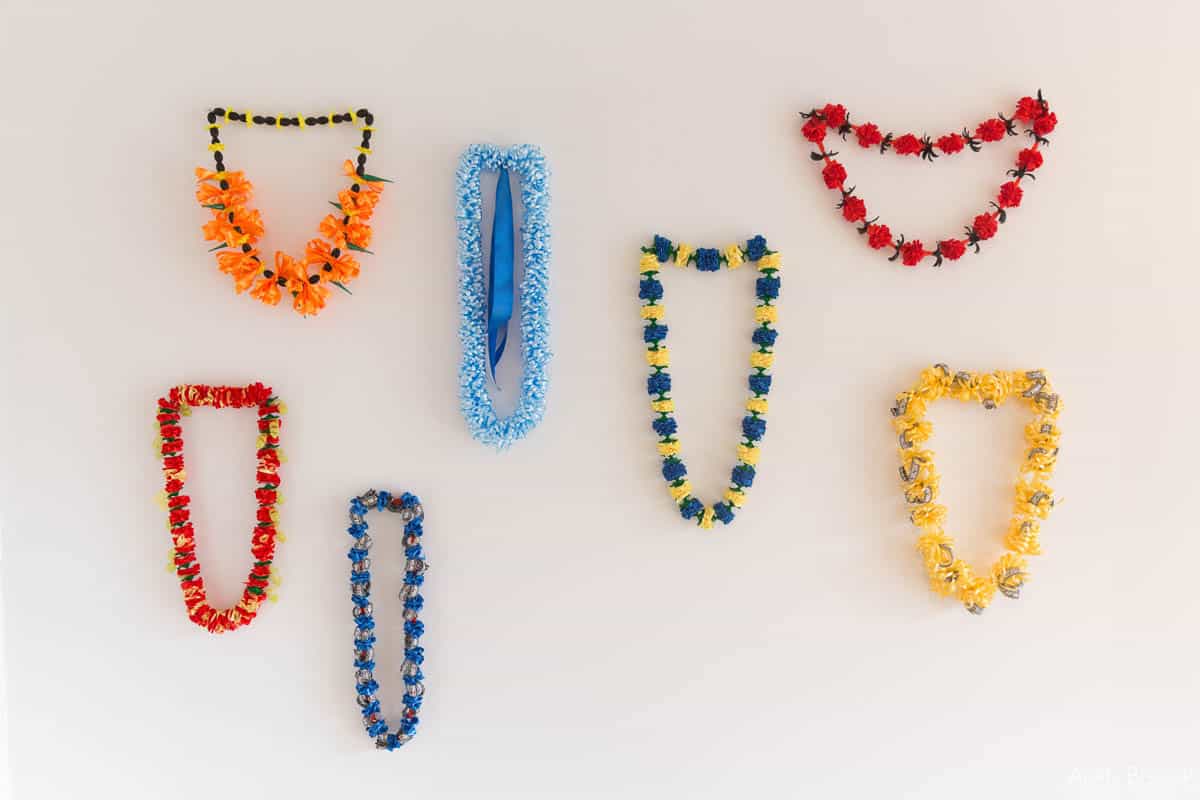 Nina Oberg Humphries, As We Connect, Leis made of ribbon and plastic, 8x 200mm x 400mm

As a multimedia artist, my work explores my identity and the relationships between my Pacific and Western heritage. Through the use of traditional Polynesian art forms such as Tivaevae, costume and dance, combined with elements of popular culture (eg, hip hop, street art and new materials), my work seeks to convey issues of identity and social politics that are based on my experience and understanding of what it means to be a young Pacific person (a second generation New Zealand born pacific person), growing up and living in Otautahi, Aotearoa today. Rather than adhering to Western concepts of art theory and aesthetics, all my work is encompassed by the guiding Polynesian principle of the Va.

“Va is the space between, the betweenness, not empty space, not space that separates but space that relates, that holds separate entities and things together in the Unity-that-is-All, the space that is context, giving meaning to things. The meanings change as the relationships/the contexts change.” Albert Wendt (1996) Tatauing the Post-Colonial Body, Span 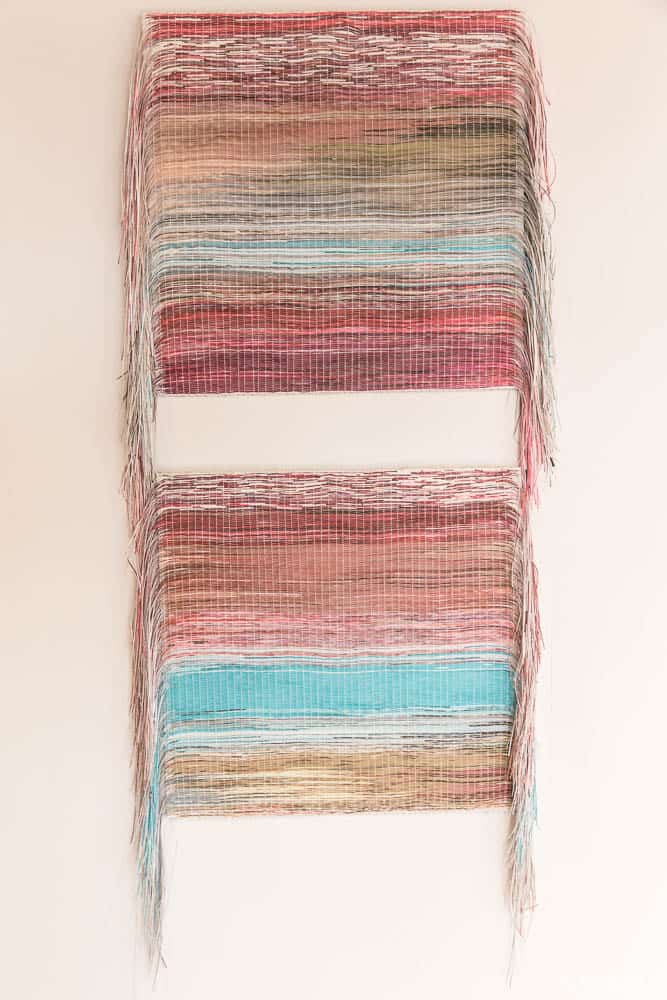 Kara Burrowes is a Christchurch-based multimedia artist. Strongly influenced by art all her life, Kara embarked on a degree in Landscape Architecture in 1994. Although fascinating, this did not deter her strong desire to create so Kara followed her heart and pursued a degree in Fine Arts from Canterbury University. She also completed a graduate Diploma in Design from Christchurch Polytechnic. While working by day as a graphic designer, Kara created artworks by night. In the last 18 months Kara has been working solely as an artist. Recently Kara was a finalist in the 2017 Wallace Art Awards and she has several awards including being a Finalist in the Anthony Harper Contemporary Art Awards, receiving the Golden Key National Honour Award, the Bickerton-Widdowson Award and the Lonsdale Edgar Award.

I’m a multimedia artist inspired by the urban landscape. My art practice involves observation of the urban landscape and the selection of elements that might often be considered mundane or disinteresting and reinterpreting them into a new dialect of expression. To make sense of the complex landscape, I look for pattern and repetition and almost compulsively re-layer vestiges from time. The resulting artworks are often reclassified into items that are precious and alluring with an emphasis on remnants and reuse. These weavings are both painstaking and meditative, using threads individually pulled from discarded advertising billboards and woven into a new order. 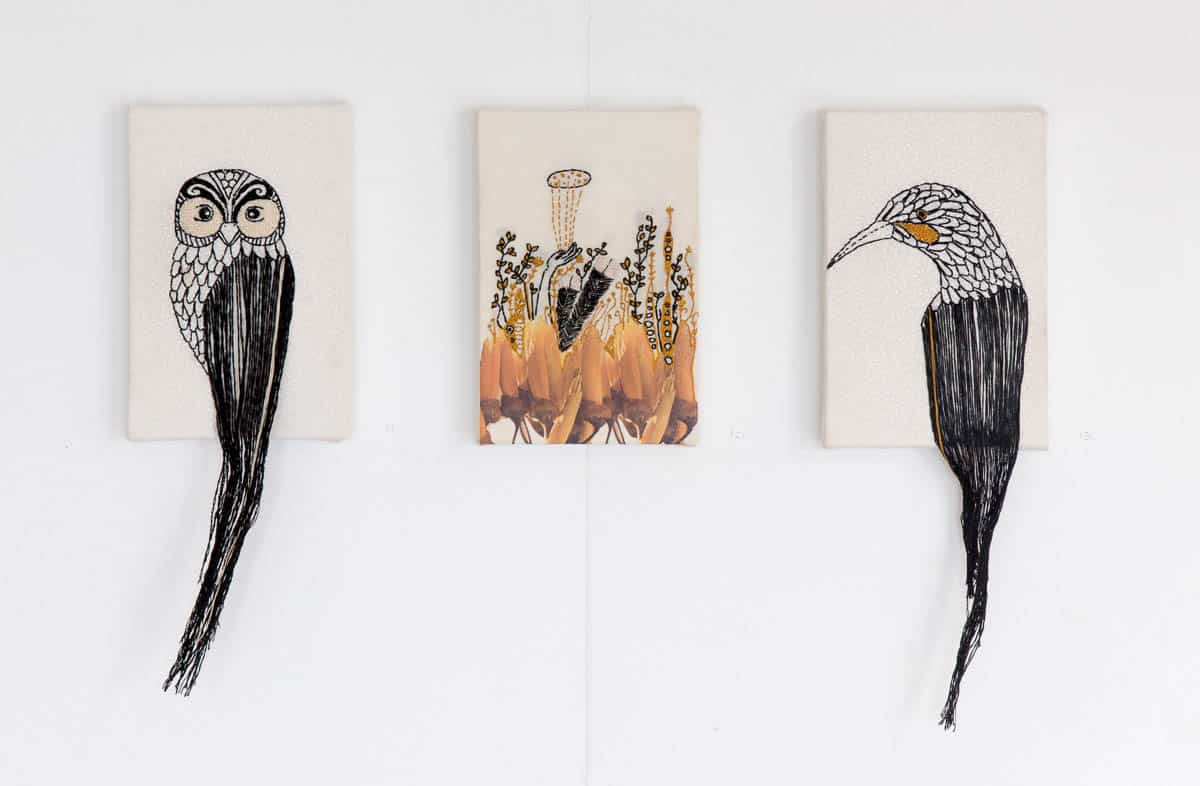 Creating surreal landscapes and faraway wonderlands Hannah Louise uses textiles to turn her dreams into reality. Using shine and sparkle intertwining with moody blues and greens, mixed up with dreamy pastel hues she creates works that are visually and texturally satisfying, blending chunky, smooth, shiny and matte, kitsch and contemporary all tied up in your own wee framed portal into the world of dreamscapes. Dreamscapes are a labour of love using a combination of hand sequinning, beading and embroidery with wool, metallic yarn and metallic embroidery thread.

Dreamscapes are a wander through Hannah’s own brain of lived experiences and yet to be fulfilled dreams. Influenced by her favourite clashes of pop culture; the glamour of hip hop homegirls, the dreamy subconscious of rom-com films, travel adventures to faraway lands, all mixed up with skills honed since she was a child. 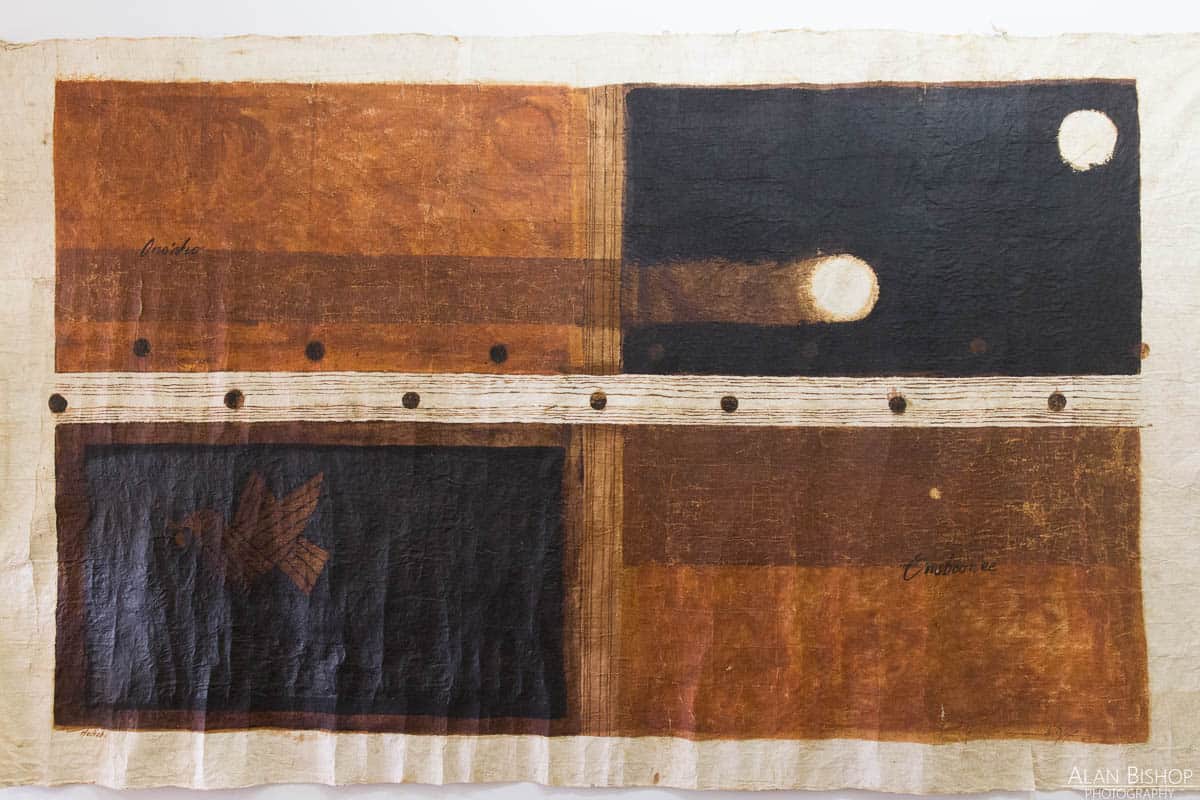 After graduating from Whitecliffe College of Art & Design in 2001, Stone enrolled at the Manukau School of Visual Art, where he received his Bachelor of Visual Arts in 2005. Since then, Stone has received a number of accolades and attracted a number of private commissions. He won the To’utupu Tonga Trust Annual Excellence Award for Art in 2006, quickly followed by the Margaret Stoddart Prize in 2008. In the following year, he was awarded the Macmillan Brown Pacific Studies Artist Residency. Through his art, Stone maintains a vibrant and inquisitive connection to his Tongan culture.

Stone has been drawn to ngatu ‘uli, a highly valued form of tapa from Tonga. Distinguished by black dye and an absence of patterns or motifs, ngatu ‘uli mesmerises with its solid fields of dark colour.

Inspired by these forms, Stone presented a solo exhibition at Centre of Contemporary Art, Christchurch, which explored the overlap between traditional Tongan art and Western abstraction. The rarity of ngatu ‘uli in part comes of the laborious process of creating the tapa and pigments. Stone’s mother and sisters make the bark cloth while he makes his own pigments from clay, stones and the bark of mangroves. Stone’s work is also notable for his method of painting using traditional Tongan smoking techniques. His process involves suspending canvas from his studio ceiling and aiming his smoke can from beneath. Using masking tape, Stone sections out areas for smoking in order to create the intended shapes. Different leaves, including those from cabbage trees, sugar canes and candlenut, are used to produce smoke that will achieve different colours. The results are earthy tones of red and brown and black. In many of the works, circles hover like halos over the large colour fields.