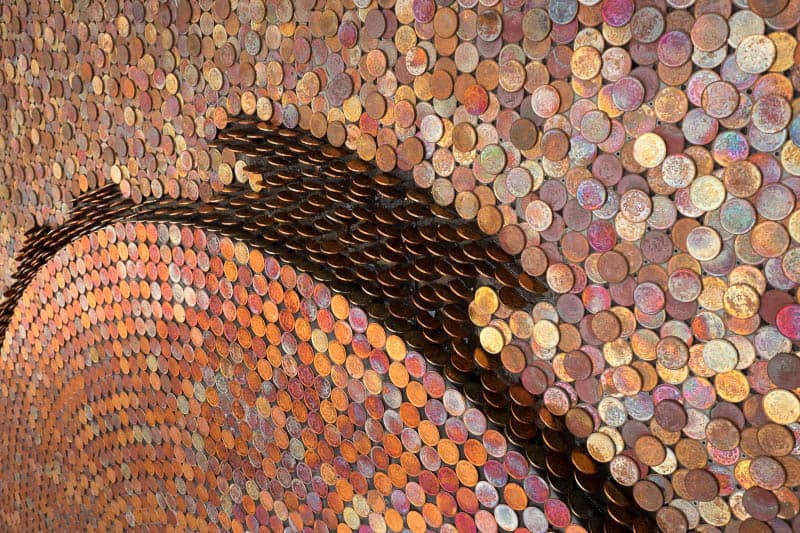 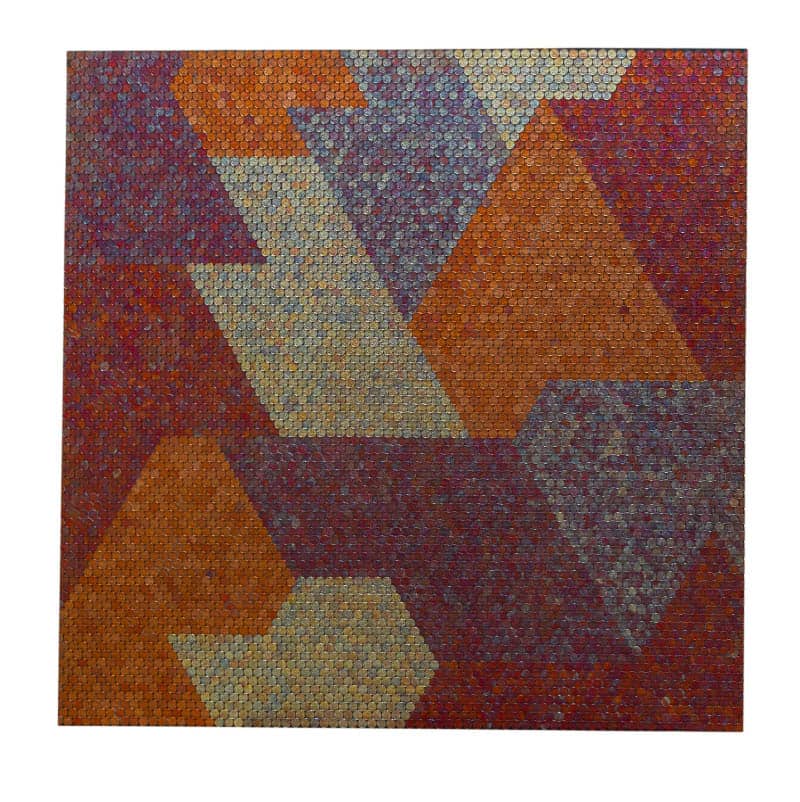 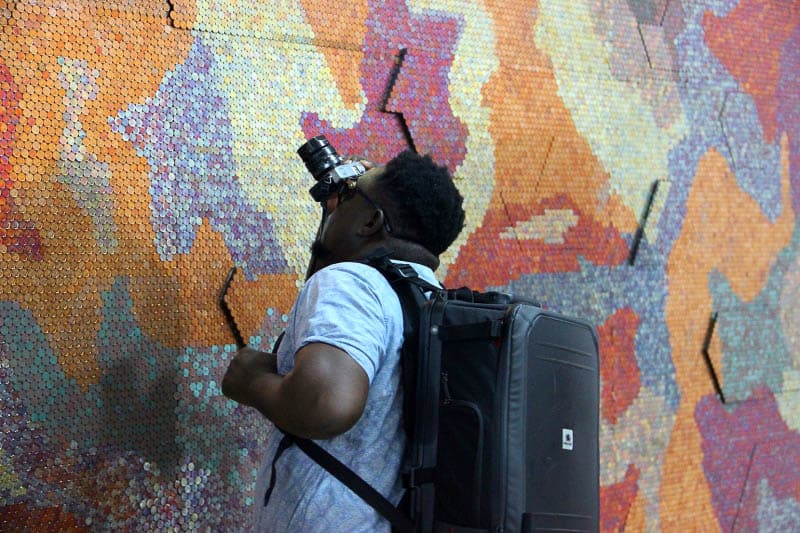 Yaw Owusu, All that Glitters, 2016, courtesy the artist Gallery 1957 Accra and Macaal Marrakech 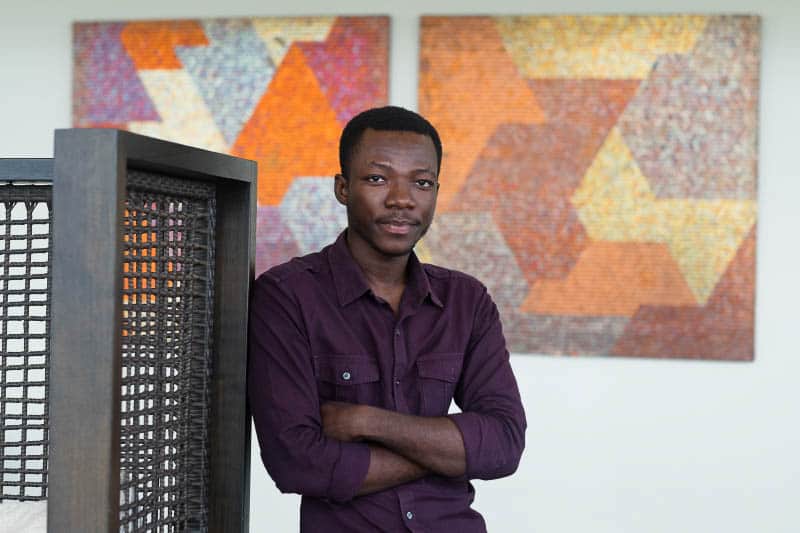 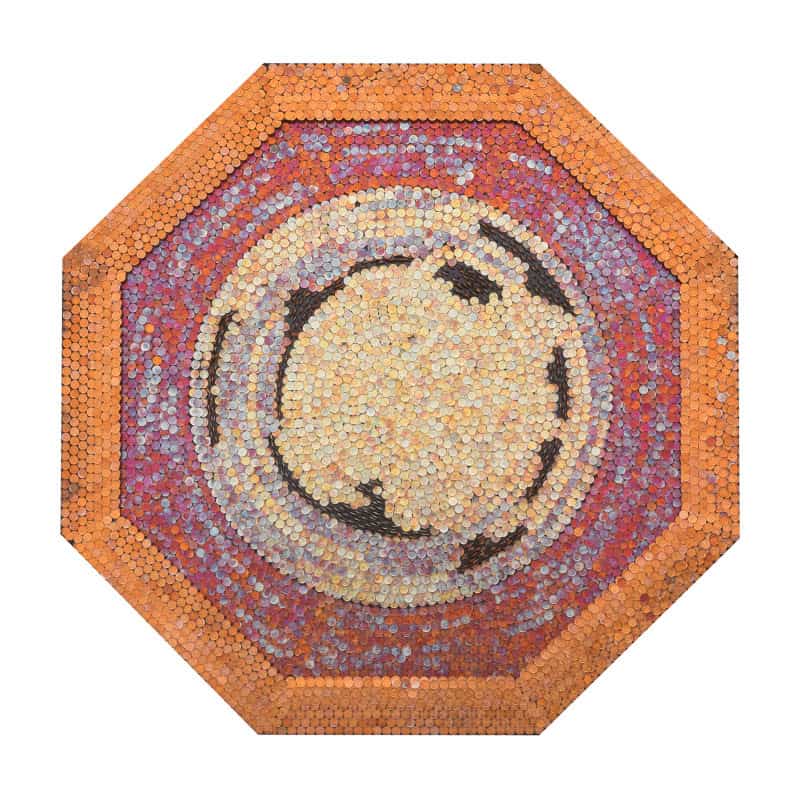 Yaw Owusu, Resurrence, 2017, coins on plywood, 52 in diameter. Image courtesy of the artist and Gallery 1957 Accra 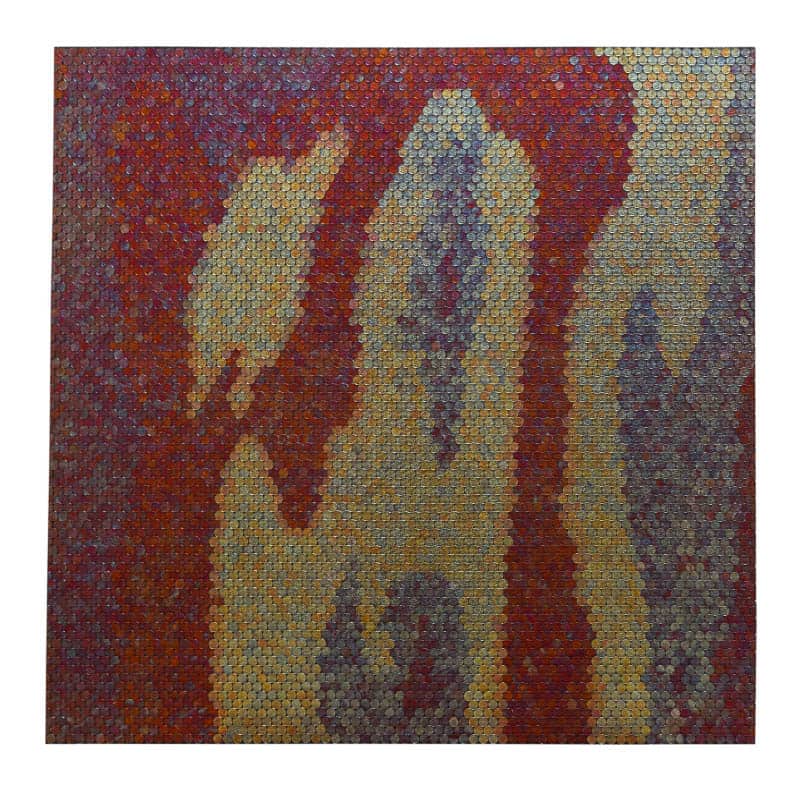 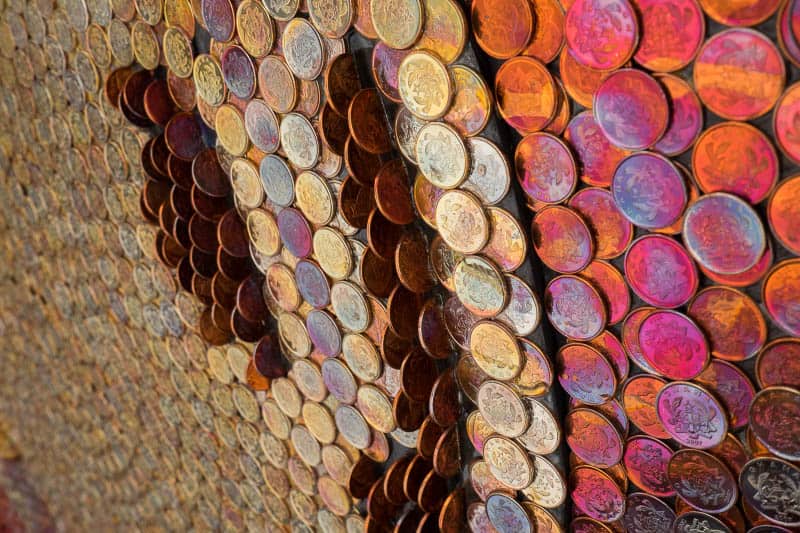 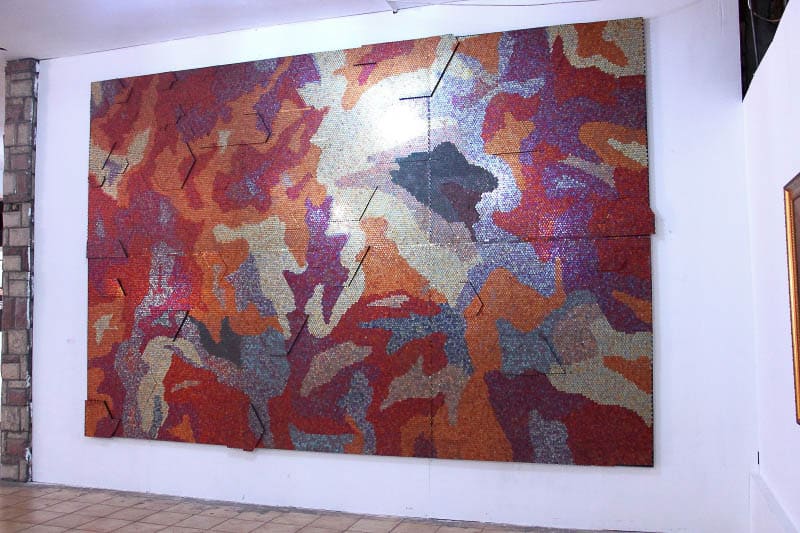 Yaw Owusu, All that Glitters, 2016, courtesy the artist Gallery 1957 Accra and Macaal Marrakech

Seen from afar, Yaw Owusu’s artworks look like pleasantly eye-catching geometrical tapestries made with a sort of glittery paint. Yet a closer inspection reveals something surprising: the pieces made by this Ghanaian artist aren’t actually made with paints, but with a hard metallic material—coins.

Gallery 1957 unveils the first solo exhibition (10 June – 31 July 2017) dedicated to this artist. Born in 1992 and now living and working in Accra, Yaw Owusu studied at Kwame Nkrumah University of Science and Technology (KNUST), Kumasi, graduating with a BA Fine Arts degree in 2016.

His works have been included in various collective exhibitions and his pieces are also part of the permanent collection of the Musée d’Art Contemporain Africain Al Maaden (MACAAL), Marrakech. Owusu employs coins to question the failures of Ghana’s ongoing infrastructural development.

The artist’s loose change assumes a higher value for the way it is arranged, forming sculptures, geometric motifs, and even symbolical maps or giant flags. Above all the one pesewa coins installations pose questions around economic and political independence in contemporary Ghana.

These small copper coins were indeed introduced to try and solve the local economy’s inflation in 2007. As the years passed, though, and in an unfavourable financial climate, the coins lost their economic value, and they are no longer widely accepted, but they have turned instead for the artist into an intriguing material.

Owusu actually had to acquire the coins by negotiating with The Central Bank of Ghana—the only bank to still distribute the pesewa—a bureaucratic process that became part of the artist’s practice.

The installations combine therefore financial, but also social, and political issues. Owusu’s maps could be indeed used to symbolically show the impact of inflation, but at the same time they also call to mind old colonial maps, referencing the past and the present, while suggesting an alternative future.

Some of the pieces include over 20,000 coins and the process of arranging them together is painstakingly long: the bronzed coins undergo various natural and chemical treatments related to the types of commerce prevalent across Ghana, a process enacted by the artist to mimic the effects of trade and time which would usually alter the appearance of exchanged currency.

Owusu treats the coins with salt, for example, to reflect the south coast’s fishing industry, or vinegar to reference the agricultural industries of the mid and eastern regions of Ghana.

The coins are then fixed onto wooden panels or draped onto surfaces to create a flexible metal installation reminiscent of El Anatsui’s tapestries.

The artist also makes in his pieces an interesting juxtaposition: his sculptures are robust and solid, but the coins are in a continual state of flux and they react and change colour with their surroundings. In this way Owusu’s pieces turn into metaphorical tapestries that allow the artist to comment about mismanaged political and socio-economic structures, while hinting at the struggles for survival.

Gallery 1957 is among the few art ventures trying to bring African artists to the forefront. Previous events at the gallery focused on artists who repurpose in their works materials such as the yellow plastic containers found throughout Ghana. You can bet we will see very soon more artists represented by Gallery 1957 at exhibitions and events in Europe, so keep an eye on the gallery’s site.

Anna Battista is a writer, freelance journalist and independent scholar. Her articles about art, architecture, culture, fashion, lifestyle, politics and social issues have been featured in American, British, French, Italian, Portuguese, Russian, Spanish, Swedish publications. Among the publications she has contributed and collaborated with there are Dazed Digital, Port Magazine, The Guardian, Vogue Russia, Vogue Italia and Interview Magazine Russia. She has lectured for many institutions including the Museum of Photography in Moscow and the AA Visiting School Paris at the Musée des Arts Décoratifs, Paris. Anna’s architecture, art, fashion and film notes are collected on her site, Irenebrination, inspired by iconic Italian journalist and fashion and art critic Irene Brin and conceived as a reaction against commercial fashion publications. This article appeared originally in her blog.