The Outback through Afghan eyes 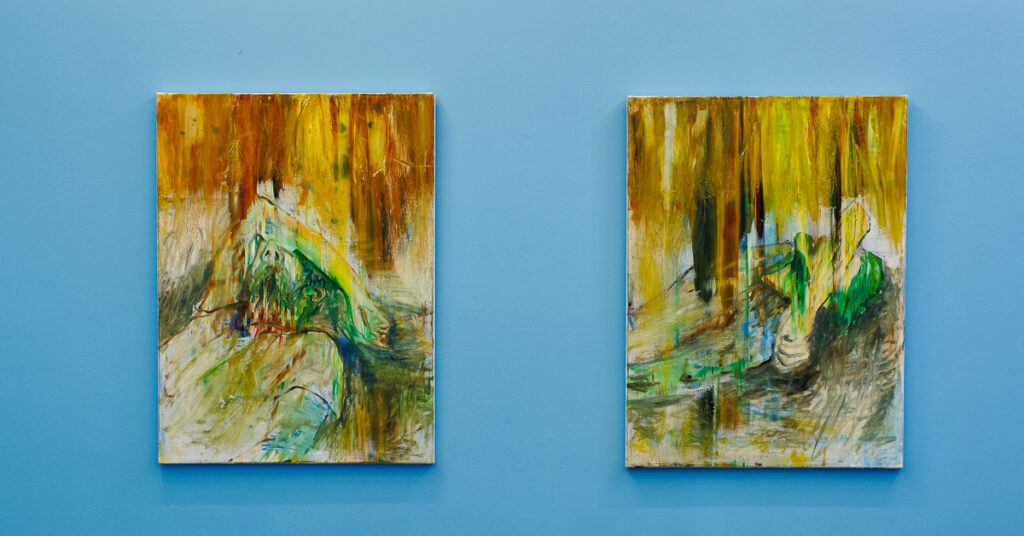 Jahan Rezakhanlou writes about the painting and poetry of Hazara artist Elyas Alavi as an estuary that connects the experience of Afghan cameleers with Indigenous Australians.

Despite Australia’s brutal reputation today for its treatment of Afghan refugees, the land has a rich legacy of an earlier Afghan presence dating back to the initial colonial days. “Afghan cameleers” is a blanket term, as “Afghans” also came from across South and Central Asia and the Middle East. They were brought in by the British due to their experience of harsh, dry environments and their ability to work with camels, better suited to Australian outback than the horse. The cameleers mapped routes through the outback, transporting goods and agricultural produce, and interacting with the local First Nations people in a more accepting and egalitarian manner than the colonialists, more at home in an environment perceived by British settlers as “hostile”, as “arid” or indeed as terra nullius.

For Adelaide-Tarntanya based Hazara artist, Elyas Alavi, this legacy has provided an important psychological platform and source of inspiration for his practice and his exploration of identity. An Afghan refugee himself, who also had to come to a foreign land thousands of kilometres from his home, he speaks tellingly of his connection with the Afghan cameleers.

In his recent project, Not Just a Shadow, a mix of painting, poetry and neon lighting, Elyas delves into this connection with the Afghan cameleers, along with their neglected history of traversing the Outback and distinctive, respectful relationship with First Nations people. Through a sympathetic reimagining, Elyas reinstates individual identity to these figures set within outback landscapes, rather than as forgotten shadows of a past structured by colonialist narratives, giving voice to cultures and people who had been allowed to fade into a dark recess of history, thus inspiring the very name of the project. His work is multi-faceted, reflecting the diverse and rich relationships forged between Afghan cameleers and First Nations people, devoid of the frontier conflict that has tainted white settlement.  For instance, he recalls how First Nations people guided cameleers to water sources, exchanged knowledge over herbal medicines and even married. This was despite the extraordinary, racist barriers placed in the way, such as in the case of the cross-cultural marriage between cameleer Akbar Khan and his Wangkatha spouse, Lallie Matbar.

Elyas elaborates the sense of division from one’s homeland and from loved ones.  In his painting series within the Not Just a Shadow project, “Seeing” depicts a body, segmented across the divided panels of a diptych, where the division of the panels reflects his feeling of separation, yet expressed through the earthy browns and ochres that at once evoke the Australian Outback and his homeland province of Daikundi.  Having endured his own personal challenges, the distress of enforced displacement and the pangs of nostalgia, Elyas came to realise that cameleers would have shared similar feelings, underscored by the failure of mainstream Australian society to accept them, despite their indispensable contributions to the country.

It was specifically after a trip around the Painted Desert and the Afghan cemetery near the remote town of Oodnadatta, close to the very centre of the continent, that Elyas felt this connection. It was an epiphany of inner peace, a sense of homecoming alongside a sense of tragedy and grievance. In the cemetery, buried underneath the scant, nameless tombstones are an unknown number of cameleers. These men had died in a landscape that looks, smells and feels different to their homes in Afghanistan and beyond. Elyas even described the “silence” of the Painted Desert as feeling different to the one back home.  Yet, despite these differences, it still represented a shared legacy of suffering shared with First Nations people. It offered an enlivening sense of kinship, of a return to origins. This gave Elyas a sense of belonging to a new land to know that the cameleers had shown respect for the land and its First Nations people, and drew a lineage to his own sense of displacement. 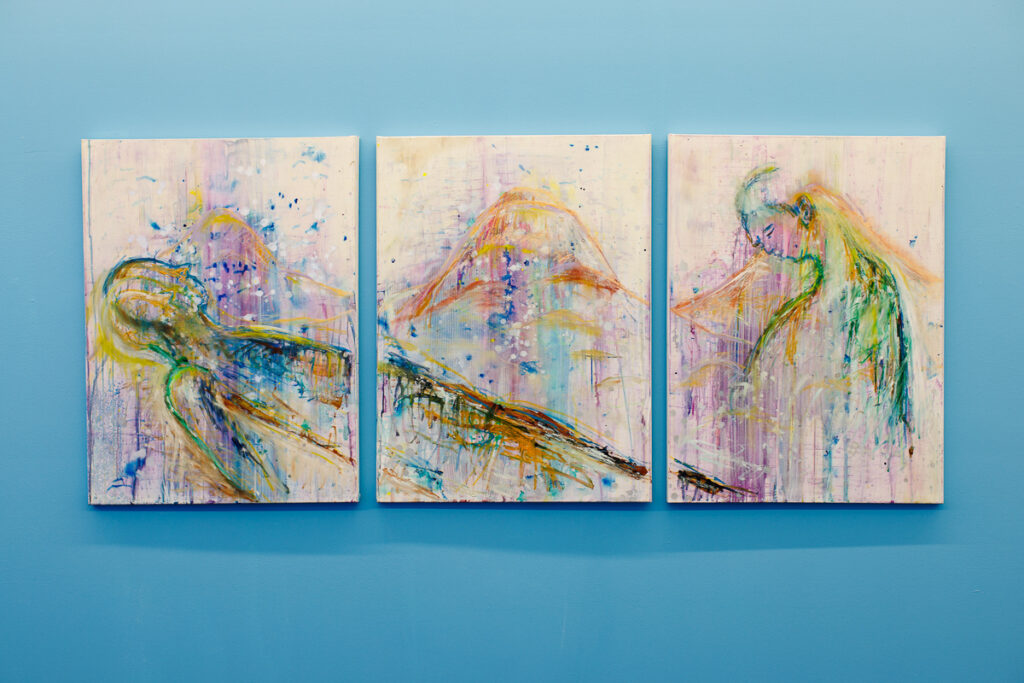 Elyas’ painted triptych, Embrace, captures this whirl of emotions. The brooding moonlight, the soaring mountains of Daikundi, and a mourning maternal figure blending into the landscape, overlook the lifeless body. This offers a sense of comfort and return to homeland, despite the tragedy of a lonely death in the Outback. As a poet, Elyas has also been influenced by the Farsi and Urdu writings of cameleers, who adapted their original languages to respond to the new features of the landscape in which they then lived and worked.

This fertile connection, blending lived experience and the resonance of the physical environment, has laid the foundation for future projects. Water may become a new medium: waterholes extended beyond their essential function of simply enabling life in the Outback, as they became meeting spots for cameleers and Indigenous people.  Traditional life in central Afghanistan and that of First Nations peoples in the Outback entailed traversing the arid land from waterhole to waterhole, drawing on an intimate knowledge of the land to survive. Water was a source of life, in both a literal and a metaphysical sense: a link that Elyas is keen to explore in future.

The metaphor of water recalls the trope of the estuary as a blending of cultures. It is at once a zone of transition, merging diverse contrasting watercourses, and a distinct ecosystem of remarkable diversity and fecundity.  Elyas’ work exemplifies how this dynamic, responsive interaction between cultures, Indigenous and non-Indigenous, extends beyond the merely material and figurative, into the transcendent and spiritual realm, and touching on an essential sense of identity.

Australia, Australia
I wasn’t born in you
And the hand prints of my father
Don’t show on your trees
But you are my homeland
And you are safe
Like my mother’s far embrace.

Not Just a Shadow was shown at the Substation, Melbourne-Naarm as part of the Hyphenated Biennale 26 November 2021-9 April 2022, now showing at Pop Office Project Gallery in Adelaide-Tarntanya, 8 May-11 June 2022 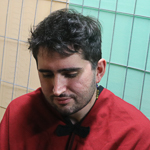 Jahan Rezakhanlou is a Swiss-Iranian multidisciplinary artist, musician and journalist currently undertaking his Master of fine arts at RMIT in Melbourne-Naarm, Australia. His research and practice focus on identifying urban and cultural structures and their impacts upon society, having worked with Iranian, Swiss, Hong Kong and Japanese grassroots art collectives both internationally and within Australia. For his Masters, he is examining different egregores within migrant communities in Melbourne-Naarm and how they are sculpted by the urban environment.  Follow haikyo_e.jahan

Tea with Abbas: Tibetan jewellery in Nepal
Thailand residency: A string of flowers – a sequence of events
Learning and sharing traditional plant knowledge
Chilean horsehair jewellery across the Pacific
An invitation to look but not touch: The Rigg Design Prize 2015
A feed of sacred lotus - Nelumbo nucifera
Nyibol Deng ✿ A recycled life
The Svord Peasant Knife: Thanks to "Heavenly Blue Sky"