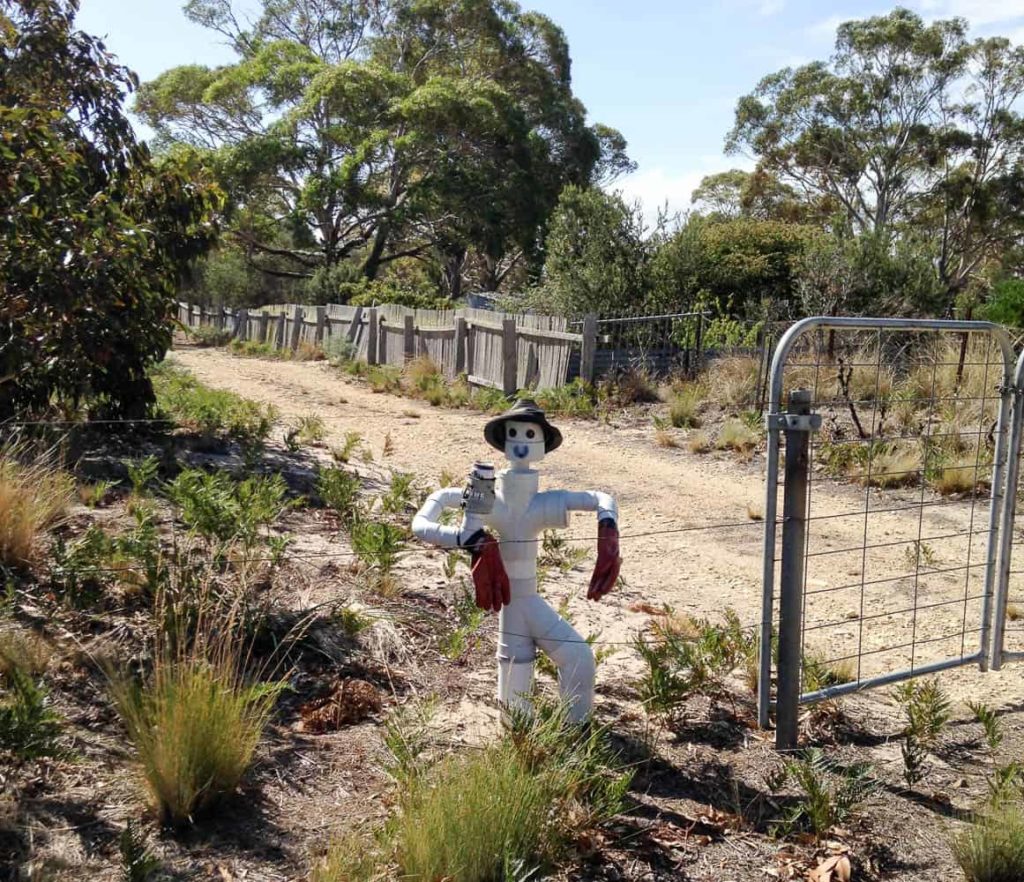 There seems to be an unsaid rule that artworks must be considered at length. A good artwork will provide a hook to lure you in; in turn, we owe it time. I’ve often heard museum staff speak derisively about visitors who whip through a museum too quickly, as if the duration of time spent with an artwork is translated into cultural kudos. But what if there’s no opportunity to stop?

Roadside art is designed for quick viewing. Pictures taken from the side window are a blur, and opportunities to stop limited. By the time you’ve registered the work’s existence, it’s out of sight. By the time you’ve decided the clumsy-looking rusty elephant holding a stubbie of beer and surrounded by a ring of daffodils is worth more of your time, you’ve already rounded the corner at one hundred kilometres an hour and the artwork is a mere fleeting memory.

Travelling around Tasmania, these artworks dot the country roads (although the phenomenon is not unique to Tasmania, the only other place that seems to celebrate roadside art with such enthusiasm is the South Island of New Zealand). This art is particularly prevalent around the Tasman peninsula and East Coast. Perhaps it’s self-perpetuating—a tendency that’s become normalised by frequency. Or perhaps, as a 2010 research project by the Australia Council for the Arts found, Tasmanians simply like to express their creativity.

These roadside works aren’t for sale, nor are they complicated by artist statements or bibliographic information. It’s not necessarily good art either. They’re often humorous, crude even. And there’s a certain generosity involved in installing an artwork facing the road and a fleeting, anonymous audience. It’s an acknowledgement that even if the land these artworks sit on is privately owned, the view is shared.

These works fall into particular genres and mediums. Most are figurative. Sculptures of people will often be standing stiffly at the edge of a driveway, one arm at a right angle clutching a beer, the other pointing at the ground. The figure’s roughly hewn wooden limbs are painted in bright primary colours. Sometimes they will wear a beanie or a scarf, or sometimes even a repurposed coat. Tasmanian tigers, kangaroos and elephants are popular, as are rainbows. Recycled rusty farm machinery constructions are traditional favourites, but with plastic waste on the rise, there are more and more works incorporating plastic cartons and other such brightly-coloured waste. Assemblages of found objects reinterpret familiar forms: a ball for a head, a broom for a tail. Some have kinetic elements, such as the elephant that guards a grassy bend on the Arthur Highway, blowing water through its trunk. There’s also a sub-group of nauseatingly nostalgic colonial-themed sculptures, such as the weathered steel cut-outs atop the rolling hills of the Southern Midlands, silhouetted against the sky. Each region has its repeating themes: the East Coast, for instance, seems to be populated by strange shellfish sculptures holding surfboards, or surfers constructed from beach ephemera; whereas on the West Coast, dioramas are a favourite. Rarely is scale or consistency of material a concern.

Not all of these roadside works are sculptures, nor are they necessarily constructed from scratch. The animals might be painted onto the landscape itself, cleverly drawing out the natural rock form into a more obvious sea creature or giraffe. There’s a particularly memorable fish that appears on a massive rock feature on the road through the South West Wilderness between Lake Saint Clare and Queenstown. By the time you’ve registered the novelty of the colourful rock art, you’re around the next bend and it’ll be kilometres before there’s an opportunity to pull over, let alone turn around.

While most roadside sculpture is self-initiated, there’s sometimes an obvious rivalry between neighbours. In fact, entire towns have adopted twee art forms as an identity. Railton, for instance, is dotted with topiaries, competing with its mural-loving neighbour, Sheffield. In the South East, Doo Town prides itself on its puns, each property titled with a pun on “doo” (Thistle Doo Me, Wattle-I-Doo, Wee-Doo, Xanadoo, Yabba Dabba Doo). It’s a little cringe-worthy, and I always wonder what happens to non-compliant residents (one house is named “Medhurst”). It’s also self-conscious in a way that so many of my favourite roadside sculptures aren’t.

Anxious to get a photo for this article, as I was driving down the East Coast last weekend, I did a U-turn to photograph a small figure constructed from white plastic plumbing pipe, complete with gloves and a can of Cascade Lager. I jumped over a weedy ditch and peered over the fence, feeling a bit deviant. After all, this isn’t how the work’s meant to be viewed. Without the blur of speed, the figure looked even more drunk. Slumped forward on its white tee-join pelvis, the recycled gardening gloves were rotting in the open air, and the can was faded. I’ve often felt guilty when I walk through a museum quickly, only taking a quick glance at each work before moving onto the next. It’s usually because I’m tired and at art-overload point, but I feel disrespectful nonetheless. With roadside art, speed is key. Speed is its context. Far from being disrespectful, these works are special because they engage and delight in just a passing glance. 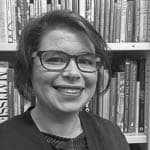 Lucy Hawthorne is a freelance arts writer, artist and researcher based in Hobart, Australia. She holds a PhD in art theory, ‘The Museum as Art: site-specific art in Australia’s public museums’ (2013), from the University of Tasmania. She taught art theory at the University of Tasmania for six years (2008-14) and currently works in the library at Mona. She writes for publications such as Realtime, Artlink, The Conversation, Art Monthly Australia, Runway and Art Collector, and until recently was the arts editor for Warp Magazine. In June, she will embark on a short visual art residency in New York City.