Andrea Ferrari presents a part of her translation of Ayvu Rapyta, the sacred myth of the Mbya people of South America, compiled in the twentieth century by Leon Cadogan

This story has been shared with permission of the Mbya, as represented by the community of Yasi Pora. Elsewhere in Garland, you can read about the background of this project and the experience of translation by Andrea Ferrari. This project is based on the principles of circular knowledge.

Chapter 1 speaks of Creation, and how Ñamandu Ru Papa Tenondé springs from darkness into being, as a hummingbird flutters around his head and feeds him.

1.
Our Father, the first, the ultimate first,
formed his own body
from primordial darkness.

2.
As he surged, he gave form to
the small rounded stool,
the divine sole of his feet,
in the midst of primordial darkness.

6.
Before creating his future abode,
as he came into being,
Our Father Ñamandu, the first,
saw no darkness, even if there was no sun.
He existed in the light of his own heart,
his divine wisdom served as the sun.

The Origin of language 6.T.N.: Even if Cadogan’s title seems to assume it is human language, the term in Mbya holds a more general meaning than that of only human language . It is interesting to notice language as such may be used by gods, human beings, animals and plants, or other beings. The concept of words and language is intimately connected to a spiritual dimension of communication for the Mbya Guaraní, including the concept of word-souls, as seen in Chapter 4.

1.
Ñamandu, the true Father, the first,
from a portion of his divine nature,
from his divine wisdom,
from his creational wisdom,
engendered flames and soft mists.

The morning prayer of any “orthodox” Mbya is thus quoted by Cadogan:
Oh, true Father Ñamandu, the first!
In your land, the great-hearted Ñamandu
rises together with the reflection of his divine wisdom 10.This refers to the sun coming out (T.N.: As this is a prayer to Ñamandu, the god connected to the sun.
Having disposed that those you provided with bows would rise,
is it that we rise once more.
Thanks to the perennial words 11.Words without evil which at no Time,
without any exception, will ever grow weak,
we, a few orphans of divinity, pronounce them once more as we rise.
Thanks to them, let us be allowed to rise many times.
Oh, true father Ñamandú, the first!

After Ñamandu sets the foundation of the First Earth/Yvy Tenonde on five indestructible palm trees, some of its creatures are described performing different actions on it. It is interesting to notice the creatures we now see are just “copies” of the original ones, who exist in spiritual abodes.

5.
The first being which soiled the earthly abode was the primeval serpent 12.T.N.:Erythrolamprus almadensis, Almaden ground snake.as identified by Cadogan, (in his Notes).
only an image of it remains now on our earth: the original primeval serpent
lives on the outskirts of our Father´s abode.

6.
The first being who sang
in our First Father´s earthly abode
The first to ever sing its lamentation on it
was yrypa, the small red cicada 13.T.N.: Possibly, Carineta diardi..

7.
The original red cicada lies
in the outskirts of our Father´s abode:
it is only an image of it that remains
on this earth.

8.
The yamai 14.T.N.:Unidentified water insect, a Gyrinidae water beetle according to Cadogan´s Notes. is the owner of the waters,
the maker of waters.
The one that exists in our earth
is not the real one anymore;
the true one lies in the outskirts of our Father’s abode;
it is only its image
that now remains on our earth.

9.
When our Father made the earth,
it was all forests.
There were no prairies, they say.
Therefore
so as to work on the creation of fields,
he sent the grasshopper. 15.T.N.: Tuku parãrã i, a green grasshopper, probably Tropidacris collaris.
Where the grasshopper’s abdomen touched the earth,
tufts of grass were engendered:
only then did prairies appear.
The grasshopper celebrated
the apparition of fields with its chirping.
The original grasshopper
is in the outskirts of our Father´s abode:
The one that remains here is only an image of it.

11.
The first being which dug in the earthly abode of our Father
was the armadillo 17.T.N.: Tatu i, Dasypus septemcinctus, Brazilian lesser long-nosed armadillo.
It is no longer the genuine armadillo
the one present on our earth;
it is only a simple image of it.

12.
The owner of darkness is the owl 18.T.N.: Urukure´a i: Presumably Megascops choliba, Tropical screech owl..
Our Father the sun is the owner of dawn.

As a child is about to be engendered, this is what the gods say:

3.
When children are sent to us:
“Well, you will go to the earth”,
The Ones who are above us say.
“Remember me inside 19.In your being, in your life.”.
Thus, I will remember you
and make my word flow 20.Inspiring you
because you have remembered me.

4.
Thus, I will give words 21.For your inspiration.
to the countless sublime children I hold
to be pronounced by them.

5.
In courage,
and in the power to conjure,
no one will surpass
the countless children I hold,
in all the vastness of the earth.

6.
Thus, when you inhabit the earth,
you must remember my beautiful abode.
I will inspire the crown of your head with beautiful, sacred words
and no one will equal you in the earthly abode of imperfections.

After the first earth is destroyed by a flood in Chapter 6, due to moral flaws of its first inhabitants in connection to incest, the New Earth or Ivy Pyau is created in Chapter 7. It is worthwhile mentioning that the ones who erred, regain grace and survive the Flood through prayer and chanting. Jakairá is the god who agrees to create it once more, even if he seems fully aware its inhabitants will suffer in it. Thus he says:

“I am already willing to create my earthly abode.
Yet this land already contains omens of misfortune for our children
up to the last generation.
Notwithstanding, I will spread on her my life-giving mist;
the sacred flames, the mists will I spread among the true beings
who will walk the worn path of the suffering of existence.”

5.
“I will create tobacco and the pipe
so our children can defend themselves.
I will shine gently with my thunderless lightning
over all the rainforests and the open spaces among them.” 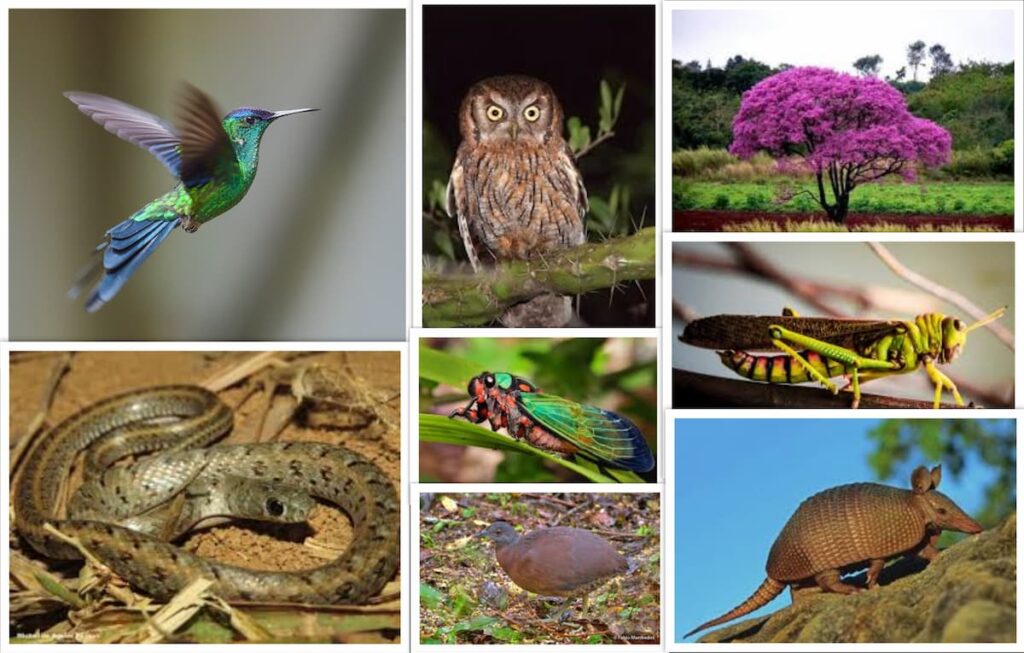 These are species referred to in the text:

Below is a recording of the launch of this translation on 16 February 2021. We hear from translator Andrea Ferrari, Bunurung elder Aunty Gail Koonwarra Dawson, Taungurung artist Cassie Leatham, Dharug artist Jules Christian and others including perspectives from Brazil. This is offered as a gift to the community of Yasi Pora and hopefully the start of exchange.

The garden of Gildásio
Circular heritage: Textile legacy in the Andes
Blood moon: Ceramics for a fragile planet
The forest on my flesh
Cielo rojo (red sky)
Moitará: An exchange between São Paulo and the village of Kaupüna
Translating the Ayvu Rapyta: For the love of a rainforest and its word-souls
Te Hosek’en Harw: The Edge of the World