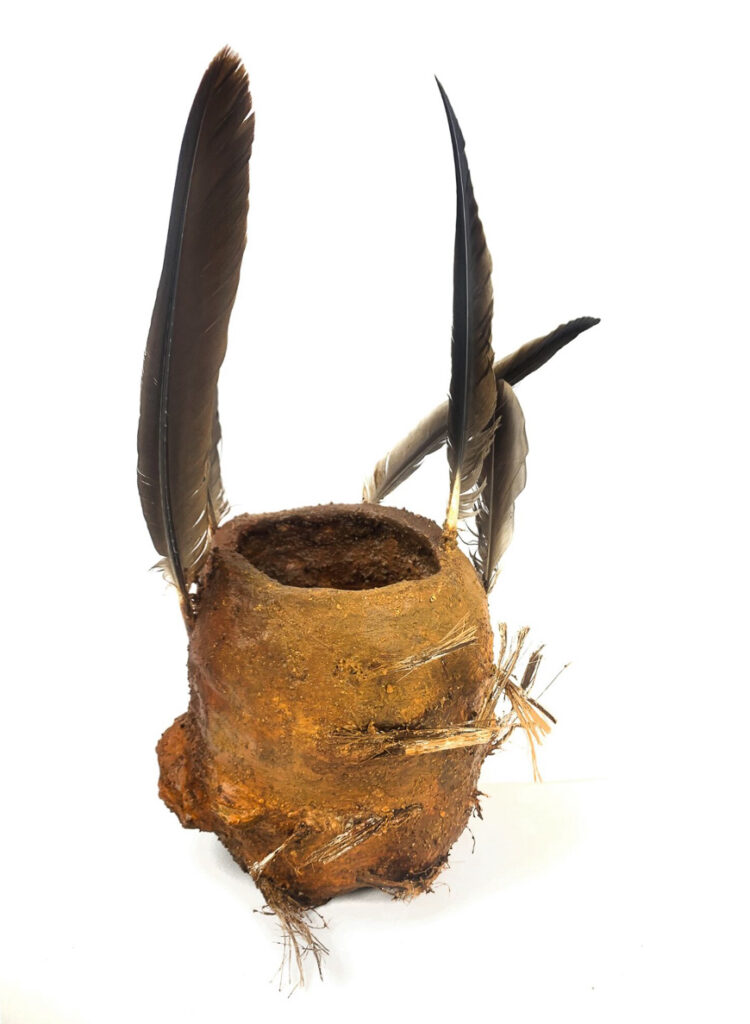 Cassie Leatham made a pot out of local clay and feathers gifted by fate that tells the Taungurung story of how Bundjil the Eagle created the land.

There are a few different versions of stories that exist among the Taungurung and Kulin Nations people. These stories are passed down through generations by spoken word and therefore the variations differ.

The Taungurung people belong to one or two moieties, Bundjil and Waang, the Wedgetail Eagle and the Crow.

Bundjil the Eagle is our Creator, our Ancestor Creator. After Bundjil created the mountains, rivers, flora and fauna, he created man from Dhulangi (stringybark) and woman from Biik-gurrin (mud). This is the story told and passed down by my Elder Aunty Lee Healy.

One day in the Dreamtime, Balayang the Bat, Bundjil’s brother, was at a place called Booerrgoen, about 12 miles upstream of Yea. Balayang was amusing himself by splashing in the Baan (water) with his Maanong (hand) and as he splashed away the Baan (water) became thick and muddy and Balayang the bat could not see through it. He took out a branch from a Darrang (tree) and divided the mud, he then saw two Maanongs (hands) and then he saw a Badjur (woman). The Badjur (woman) emerged from the muddy waters and was named Gannawarra (Black swan).

There are other stories I was told and carry forward with my knowledge to this day. So Bundjil came down in a meteorite and landed on earth and created the mountains, rivers, lore, flora and fauna. His feathers in flight landed on Biik (country) and created man from stringybark tree and woman from mud.

These feathers are so significant that finding them on Biik (country) brings more knowledge and protection. I was out on Biik with my grandson and telling my grandson the stories for him to listen and have these embedded into his memory to tell and pass on in his future storytelling. As we were singing the songs of Bundjil, we looked up to see two flying above our heads. Then down came two flight feathers in the whirling wind (just as the story was told many years ago in dreaming). So we picked them up and gave gratitude for the gifts we just received. That moment will live forever in both our memories.

We then went and foraged some pipeclay, ochre, wattle saps and emu fats and I created a clay pot that was the vessel of the story to share in a unique artwork that would then be selected for the NATISSA Telstra Darwin Awards in NT and be exhibited at MagNT. The interest and the story were unfolding into something so powerful, my Liwik Bundjil (Ancestors Creator).

Still to this day I find myself in the presence of these magnificent creatures that made my ancestors and I study their movements and seasons. I’ve had the privilege to see baby chicks in huge nests come to flight and to be still finding feathers of Bundjil. 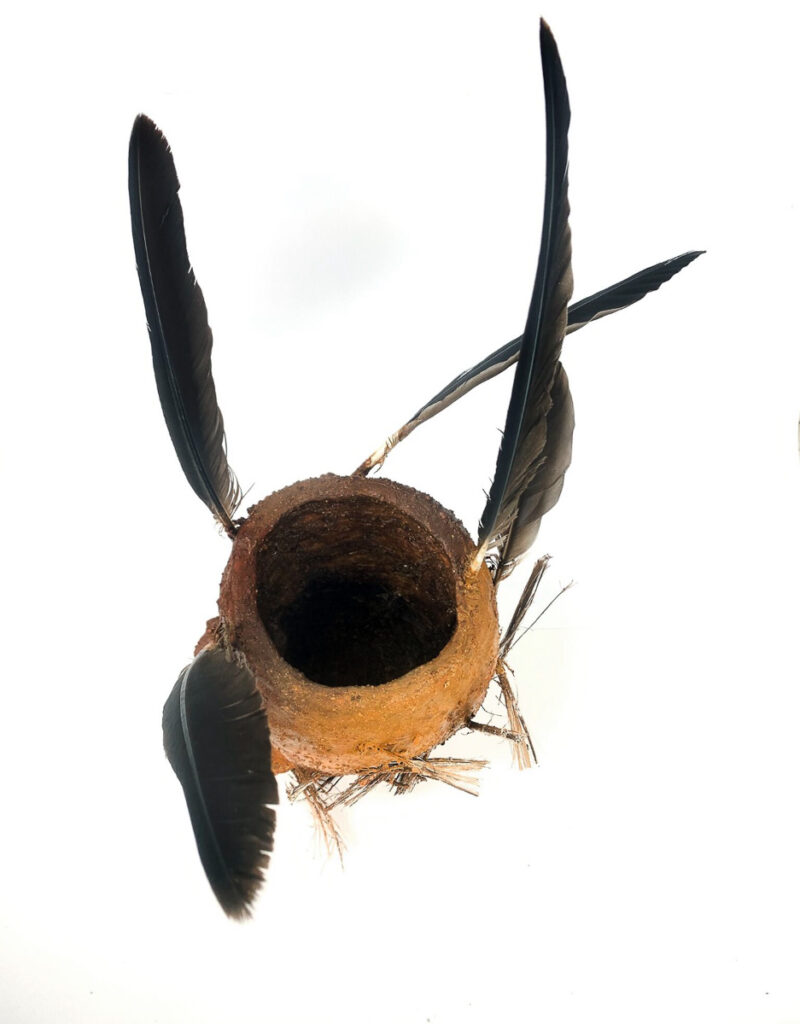 This knowledge pipe clay pot represents how our Liwik (ancestors) were created and the fallen Bundjil feathers that fell from Bundjil our creator Eagle. He turned stringybark to man and mud to woman.

The pot was made of natural resources from Biik (country). I used the feathers from the story of my grandson and the ochres from our country. We foraged the pipeclay and took wattle sap from our trees to seal and make it set. Emu fat was mixed with the ochre and covered the stringybark to be able to set it in the pipeclay.

It also represents how we need to save and protect our old trees. These trees are important for our native wildlife as the old trees have many stories themselves, if only they could speak! The Eagles build huge giant nests in the old trees and the higher the better for them to raise their chicks away and out of reach from predators.

I have found many nests recently and have documented the movements and ways of the patterns of feeding, nest building, seasons of breeding and flight. Climate change and environmental impact have caused some areas to be not safe for our Eagles. The land is changing and more and more is being cleared for space to grow vegetables. Once this land had plentiful native foods and a sustainable way of living. Then came colonisation and farmers took our lands and cleared our ways. Our lifestyles changed and so we had no choice to move with the change.

Now we have a voice again and will fight to protect our heritage and country. 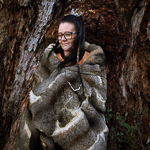 I am a Taungurung woman of the Kulin Nation. My responsibility is to keep my culture alive and therefore I share my knowledge in cultural education programs, I facilitate weaving and skills in traditional making, I am currently learning silversmithing with KHT Blak Designs and preparing for collaborative. Visit www.wildblakarts.com and follow @wild_blak_arts. Photograph by Arsineh Houspian.

The gate is open: Guan Wei and Jayne Dyer in China
Made with lava in Chile
Ayvu Rapyta ✿ A selection
Dear Adelaida
Kamaquen: Ceramics powered by Andean energy
Litema, the pride of a Mosotho woman’s home
Dolores Porras and her creative atelier
A healing walk: The Lake Bolac Eel Festival story