The Messenger Through The Twilight: A clay apocalypse 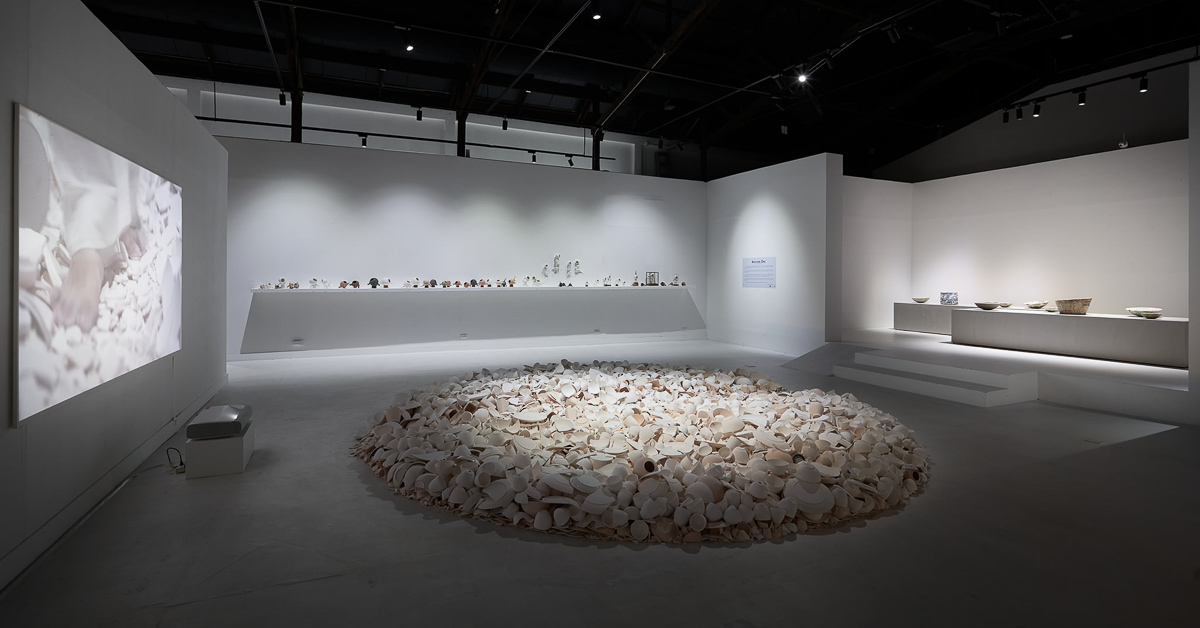 The exhibition is the collaboration between five Bangkok-based contemporary artists and Manipa Jayawan as a curator, who convenes the journey.

Ceramics and stone are the evidence of history, for both archeologists and geologists. Ceramics transfers the stories of past human civilization to the present day. Also, geologists analyze stone to picture the phenomena of long-pass events. Since many other materials decayed a thousand years ago, but ceramic still remains.

The Messenger Through The Twilight portrays the events of the past until now and on to the future. Especially, in the Anthropocene era, in which human footprint affects the world past the point of no return to the inevitable apocalypses. In this exhibition, artists portray their own transition from pre-apocalypse to post-apocalypse in many contexts. 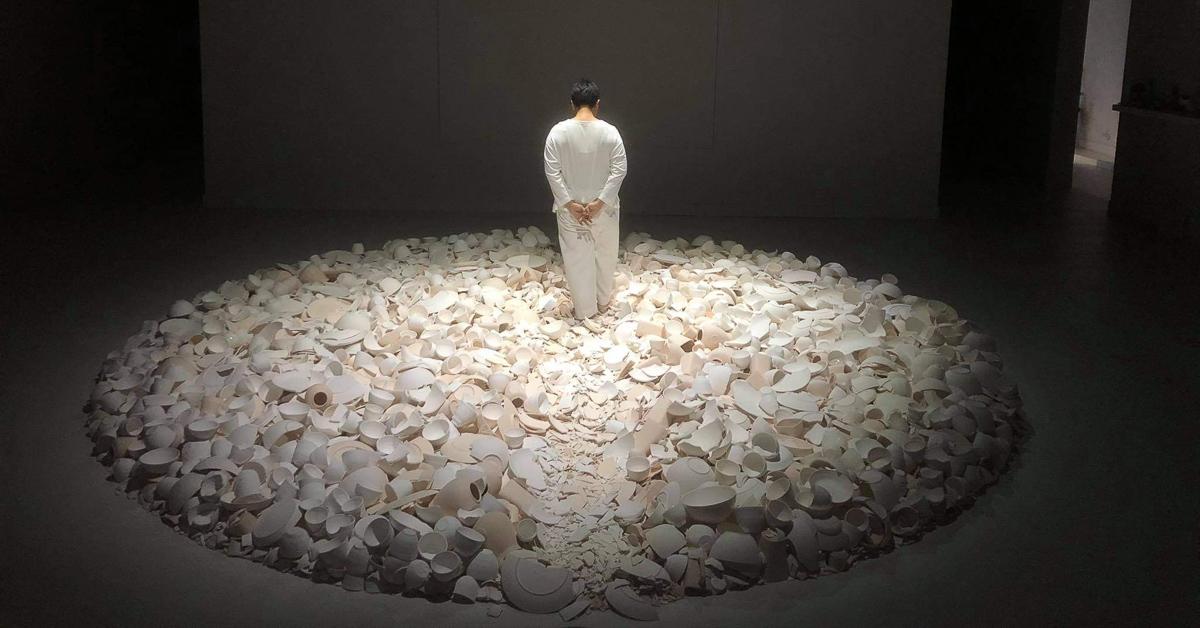 In the middle of the space, lies an enormous pie of the ceramic ruins. In the midst of it, there is a trace of a path that suggests that one once walked on repeatedly. At the wall in front of it, a recorded video of the artist walking on crumbled materials shows the essence of the work.

Aor’s works always convey a sense of internal journey, self-reflection and internal dialogue. It is a process of seeing through self and reflection of things that built her own entity. She explores human nature, feeling, perception, pain, happiness and life experiences.

In the long history of human civilization, ceramic has always been there as part of us. Apart from their functional purpose, they carry stories, meanings and identities. Also, in this work, they contain the artist’s internal journey. It is a process of repeated self-examination and suffering, metaphorically as walking on a thorny path of ceramic ruin. Artist walked back and forth on that path until the sharp edges fragmented to be refined pieces, pieces crumble to dust. Eventually, they form a solid and stable path for her life.

Building from her previous works, she now chooses to abandon form and her creations. She dropped her handmade vessel into pieces, wash away the value of ceramic as creation and turned them into past experiences which now lie on the floor. In a sense, the forsakenness of form is a process of forsakenness of own ego.

The artist’s idea of internal journey, the living in the present, and self-realization come from Buddhism philosophy which always put her works in the realm of Buddhist art. That makes an interesting phenomenon as Buddhist art has always been seen as a traditional and conservative type of art. However, Aor’s works are attempts to prove that the idea of Buddhism can be reinterpreted and can be placed among the contemporary art scene with a contemporary approach. 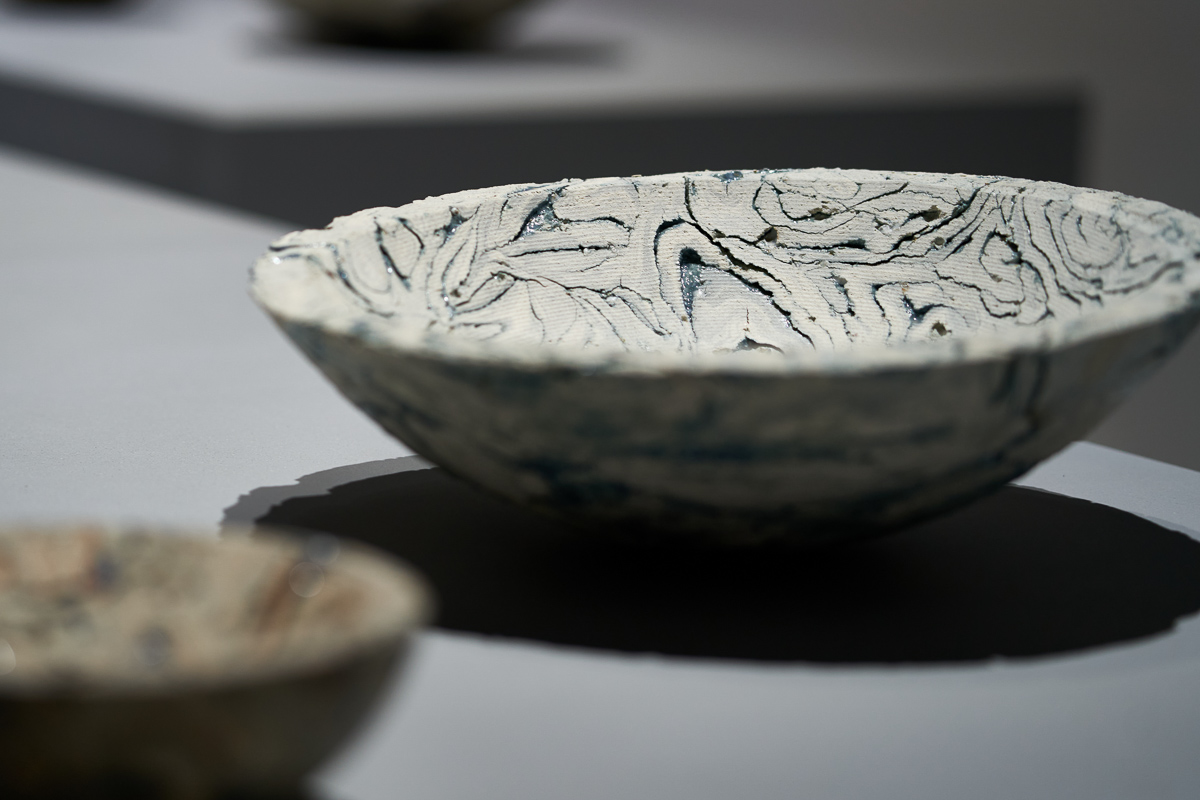 A set of weird vessels and a video record of the making process have been shown side-by-side. The weird vessels in term of forms, materials, and size are far too big to place on a table and the uncanny texture induce the questions of what they really are.

ex Machina is the satirical interpretation from artists’ post-apocalyptic world after human civilization. In the post-apocalypse era, human civilization collapses to ground zero and restarts in the manner of hunter-gatherer culture. However, in this ruined world, the remains of current civilization still exist but are covered in the dust. The story begins when a group of stone-age humans explore the place where it is once a furniture factory. They find a CNC machine (Computer Numerical Control) still connects with solar-cell, making them still functional. Miraculously, the CNC machine starts making vessels from its file memory. The weird vessels have been created from a big chunk of stone, making post-apocalypse humans perceive them as a sacred vessel, as a gift from their creator. Since they cannot apprehend anything regarding the machine, this must be the work of god.

Sarcastically, Mo raises a question on how a culture and a civilization build from their beliefs and narratives. Humans as creatures of curiosity are always looking for answers, or making some explanations of what surrounds them. Before science, most explanations related to gods, miracles, or spiritual phenomenon. When gods are involved, the narratives become more and more sacred: they rise above humans. Mo questions those processes through his vessels. The vessels are created by machine through a code. These objects are just concave forms with no reference meaning. However, he embedded the meaning of god creation through semi-sphere, semi-oval and their proportions, all those forms involve with Pi value (π). Since Pi is arguably described as a god’s number, and even current human technology can only dig through those 62.8 trillion decimals and still cannot find the end of it.

These machine creations hold no meaning but the process of culture construction is the one that is responsible. Every value, high and low, are created by culture. Mo’s works raise a question to those values if they are valid or just illusions. 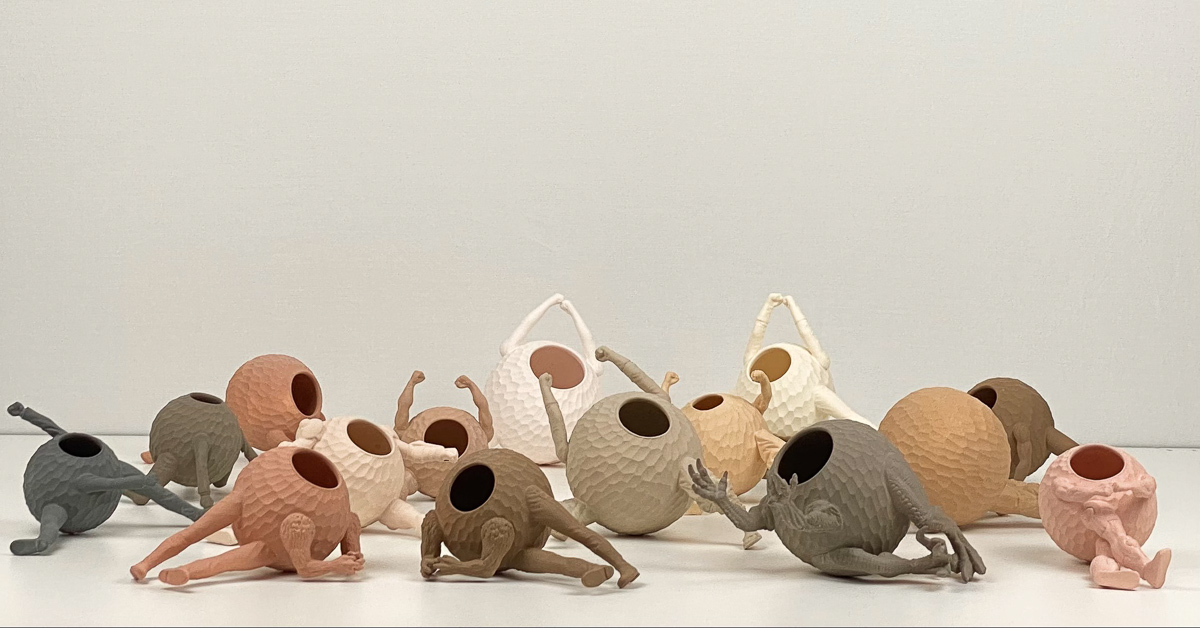 Another One portrays the variety of human aspects both beautiful and hideous traits. The form of the works is composed of the various organs of humans and animals, with textured spheres as the main bodies. The imaginary creatures are fulfilled by our perception to be full of emotions, backgrounds, and stories from our own social experiences. These figurines can be perceived as historical evidence which carries the current human cultures into the future after the apocalypse.

The artist intentionally captures traits and appearances of human such as races, skin colors, culture, beliefs, and religions, put them together as collage figurines. Some parts may contain their own meaning, some not, if place separately. However, when they are together, each specific meaning can be perceived automatically and interestingly.

The works emphasize the same old question raised throughout our history: the question of how the differences of genes, appearances, and cultures may lead to unification, contradiction, discrimination or war.

Another One does not purpose any solution or any guidance. It is just a work that emphasizes these varieties. These imaginary creatures do not stay together or apart from each other, they are just being there. That leaves the meaning to the perception of the audience to decide. 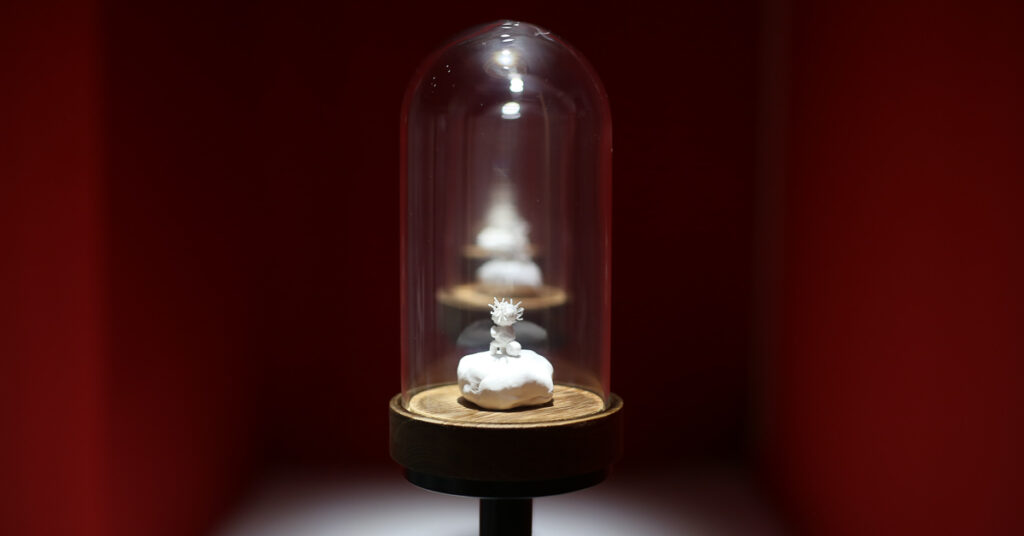 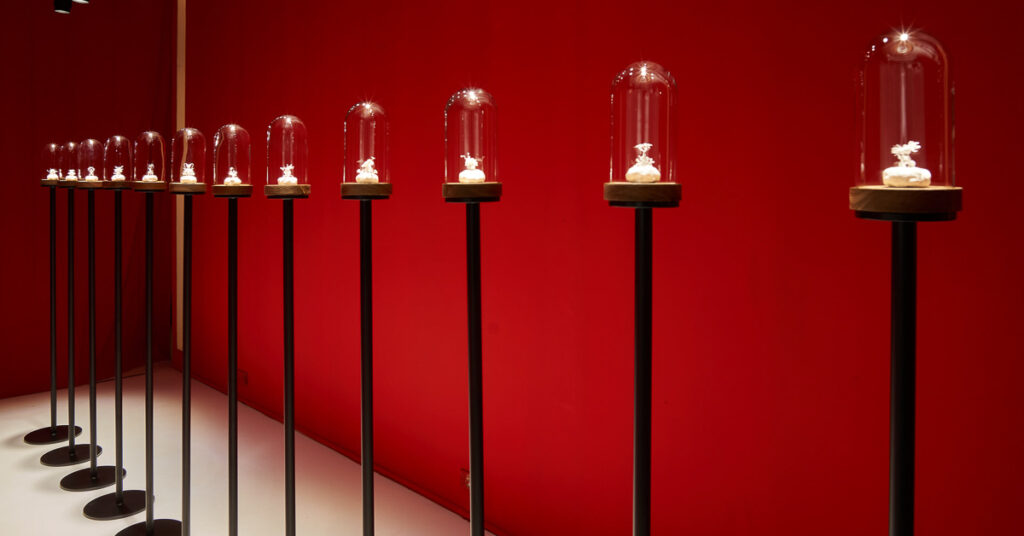 In a part of Buddhist scriptures, there is a prophecy telling the far future close to infinity about the next reincarnation of a Buddha, named Maitreya. After the uncountable years from now, human life-span may shorten to ten years and then after a path of redemption, it will expand to almost infinity then back to 80,000 years. At that moment then Buddha Maitreya will reincarnate to the earth and transform earth to be utopia.

The artist chooses this prophecy to be reinterpreted into an optimistic sci-fi version. Until the next Buddhist era, there must be many deep mutations and evolutions to all creatures on earth. There will be no humans as we know but new species, living in the unimaginable environment.

Eiair paints this new world as a science-fiction utopia where all the creatures can live sustainably together with zero conflict. In that interpretation, all creatures should and can live by themselves by relying on sustainable and infinitive energy such as solar power. The works display those imaginary creatures which combine the components of living things; plant, human and animal together. This optimistic world reflects an artist’s specialty. From past works, his tiny art pieces always contain a sense of diligent skill and humour. The size of his works invites the audience to engage them in close proximity which we can perceive its friendliness within those meticulous details.

For Eiair, his works never reflect reality but his imaginary world. Therefore, his works do not emphasize his skill through imitation but he chooses to collage components together, some are abstract, some are meaningful and let the audience perceive as they are. 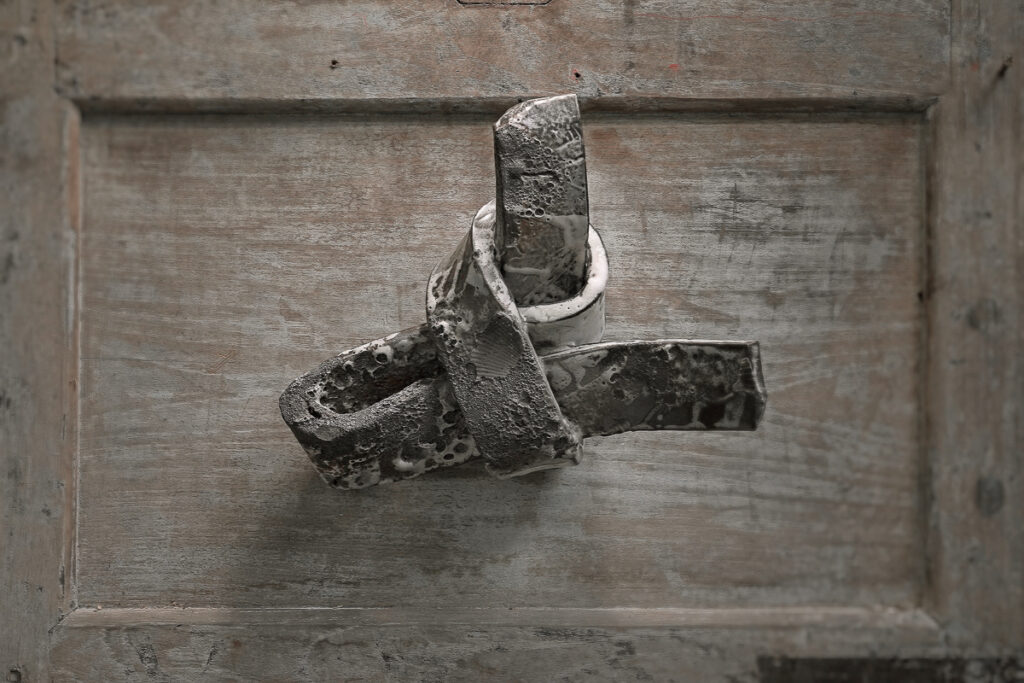 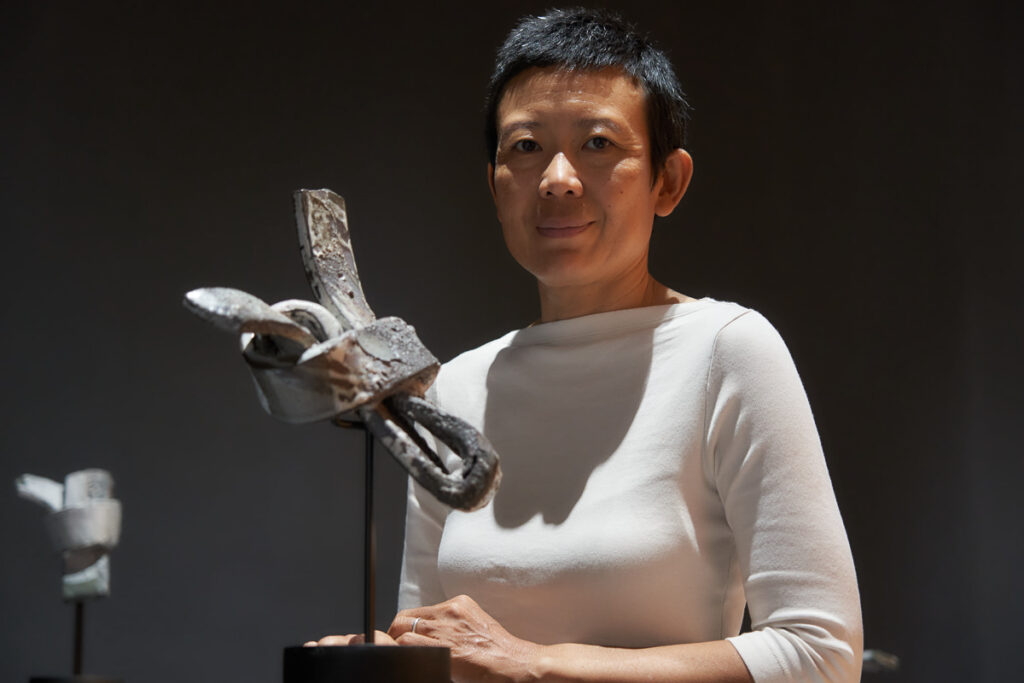 “Knot” as a semiotic is long used throughout human history, conveys senses of obstacle, a cause of problem, an unsolved issue or unfixable internal problem. The knot can be a cause of what the current state is or can be a chain that locks us in place, preventing further development.

In the technical term, this exhibition is a continuous work from the previous one, Breccia, 2020. In Breccia, the artist glorifies the quality and nature of stone and the birth process of stone. She emphasized a fact that the process of creating ceramic is a shortened version of creating a stone, a mountain, or a land. This meaning is still carried on in this collection through their surface texture, the value of materials and the process of making them. The textures of the works are full of details that are the result of the collaboration between touch from the artist and the firing reaction.

In Petrified Knot, the artist creates loose “knots” with rich surface textures which once seen, anyone can easily figure out how to untie. These knots may seem easily untied; however, to untie them is impossible since it was fired and be petrified. The work represents a knot as a source of the problem or a cause of the apocalypse in a certain context. In the troubleshooting process, we can pinpoint what is the core of the conflict but since it is petrified and cannot be changed, maybe the best solution and the only possible way to solve it is to break it into pieces.

In Mene, Mene, Tekel, Upharsin, the white stone knots, are arranged on the white wall. Artist represents them as writing on the wall, a prophecy telling of an ending.

Pim picks up a story from the Bible. A story of the moment before the fall of Babylonia. At that moment, a phrase “mene, mene, tekel, upharsin” miraculously appeared on the palace wall from nowhere, transmitting the message from the god about the collapse of the Babylonian civilization. The message foretold the inevitable apocalypse.

Both works convey the causes of the tragedy and the moment before, in the personal and social context. When something built up in ourselves for a long time and then they became our foundation, became us. Even though these issues are the causes of the problems, we cannot change them anymore since changing means the collapse of self.  We desperately refuse to change. This destruction not only occur in ourselves but it will inevitably occur in a social scale. The new era will come and it will sweep away all the obsolete things, gently or the hard way.

The Messenger Through The Twilight: Ceramic art exhibition 333Art.Gallery in Bangkok, 9-31 October 2021. 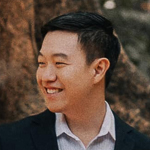 I work as a lecturer at the International Program in Communication Design, Faculty of Architecture Chulalongkorn University in Bangkok, Thailand. I am a part-time writer with the enthusiasm for Art and Design in my region.

A clay voyage across the Pacific—Omnus Terra
Claudia Fernandez: Ceremonia
“Drifters” in Jingdezhen: Past meets present in the porcelain capital
Sindhu - The river line: A dialogue
For the love of Lao - Studio Naenna
Knotting culture: the muka of Rowan Panther
The Rohingya story in Thailand, through embroidery
place of not-knowing: on Arrernte Country