Ghost objects: Crafting the poetry of the everyday 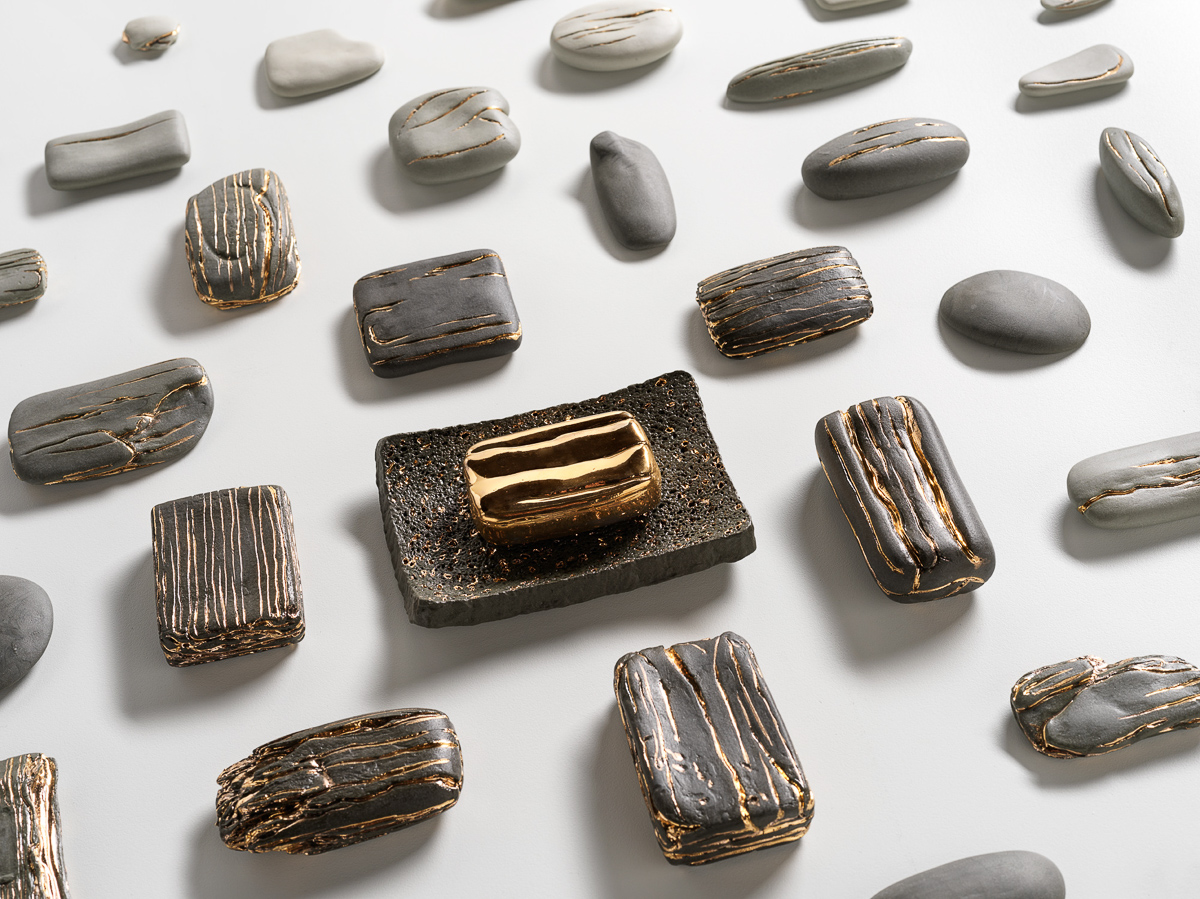 honor freeman reflects on her dual practice, making objects for both the art gallery and the street.

The ceramicist honor freeman makes work for two very different worlds. The works she makes from the most humble of everyday objects are destined for one of Sydney’s most prestigious art galleries. Yet she also creates works anonymously for enjoyment for anyone on the street. We were curious to understand how honor connects these two opposing worlds, the gallery and the street.

✿ How did the idea come about of casting everyday domestic objects?

I love the unassuming ordinariness of the everyday. Lurking just beneath the surface are all sorts of secrets as though objects bear witness and hold untold stories or are mnemonic devices prompting memories and rememberings. They can reveal and tell us much about who we are.

The everyday is a rich vein of source material. I like that there is an embedded and unspoken language within the objects that say so much without needing words, an existing poetry I guess. These banal and humble objects have a democracy to them and are often full of humour and metaphors for life. There’s a lot of layers, but they are also just simply what they are, and people understand them. It’s a gentle way into work for the viewer. A bucket or a bar of soap is something we all understand. We know how they feel in our hands, the weight of them, what they do. We have a relationship with them.

I suppose there is an element of nostalgia that the work evokes, perhaps surprise in the material deception, maybe a little melancholy, but hopefully a little joy or dry wit too.

I was introduced to a word recently, saudade (of Portuguese origin), meaning “longing”, melancholy or nostalgia. I think that goes some way to put a word to what I’m at times attempting to achieve within my work. I am not a composer of poetry but this for me is the closest I might get, perhaps like making things for all the unfinished sentences and words I don’t have.

In a 2018 series of work for Spring 1883, I installed works into the bathroom of the famous old Windsor Hotel (Melbourne). Producing work for this exhibition in some ways brought me full circle. Returning to and remembering early work and what began my interest in casting used soaps. As a student, I cleaned rooms and washed the soiled linen at a budget motel on the main road into Adelaide. It was at times a confronting job, and I was often left wondering upon encountering a room. In 2004 I finished working at Motel 277, and organised an exhibition of artists in a number of the rooms as part of the Adelaide Fringe Festival.

Exhibiting at the Windsor Hotel reminded me of these shared and intimate spaces, the many stories (big and small, sinister and sincere) that the old hotel had witnessed and held within its walls: the stories those rooms could tell. But my thoughts were also often with staff who each day quietly and efficiently go about returning the rooms to an inviting state where the stories of the previous occupants have been dusted and cleaned away 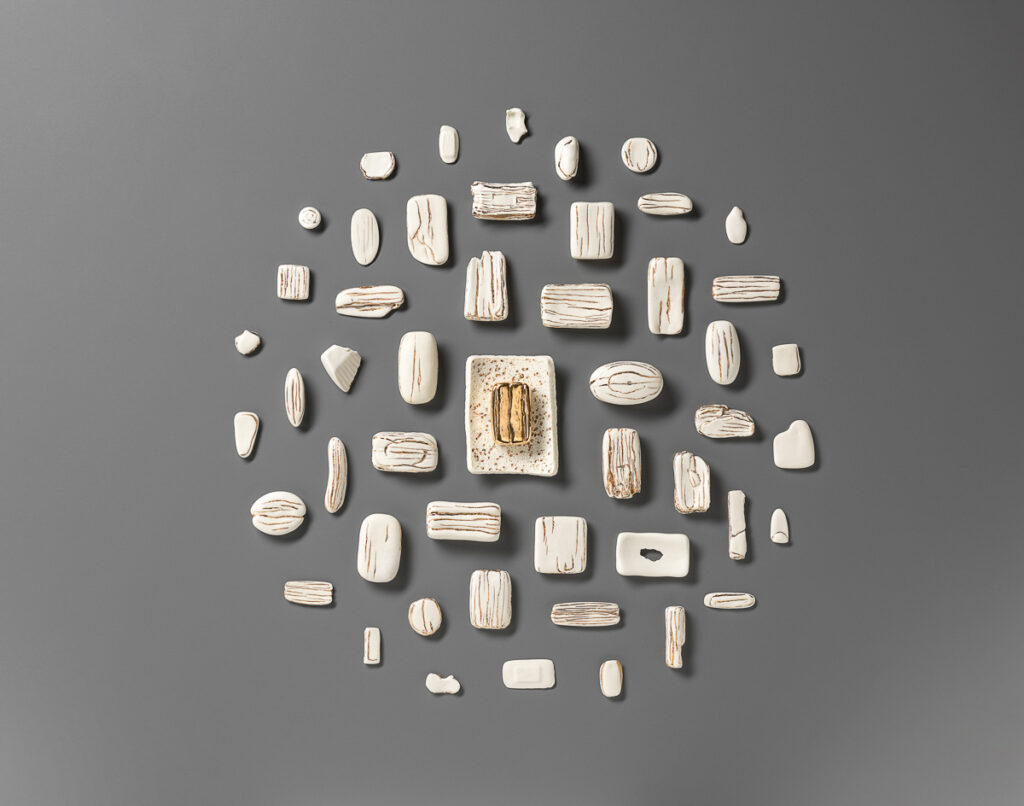 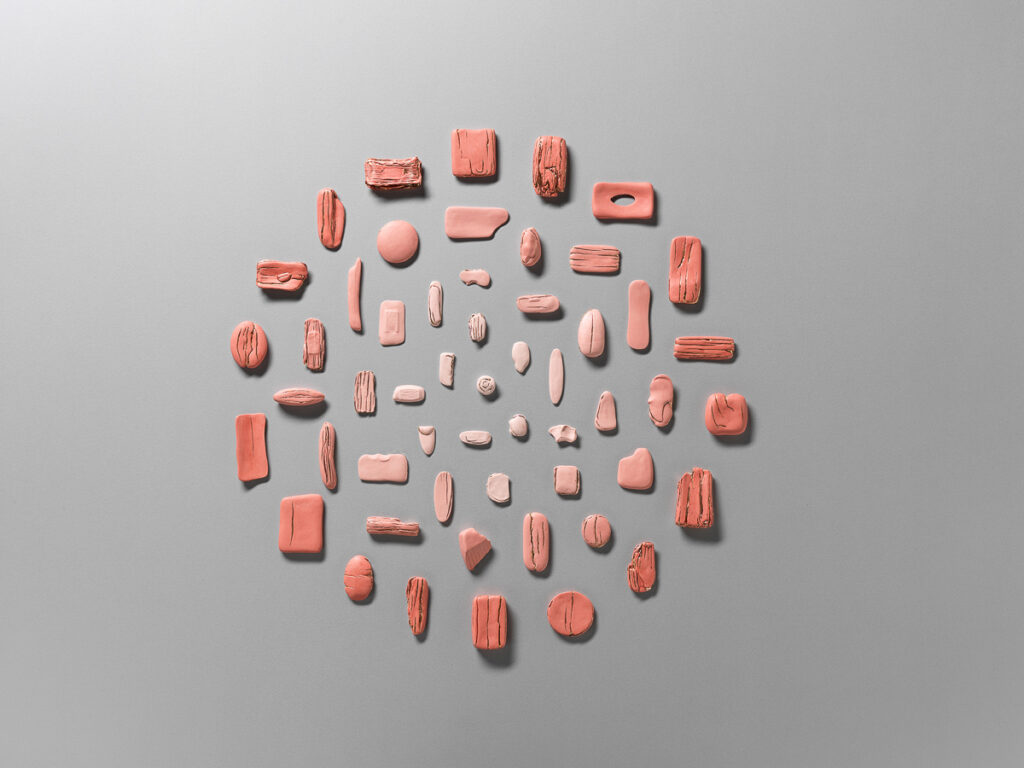 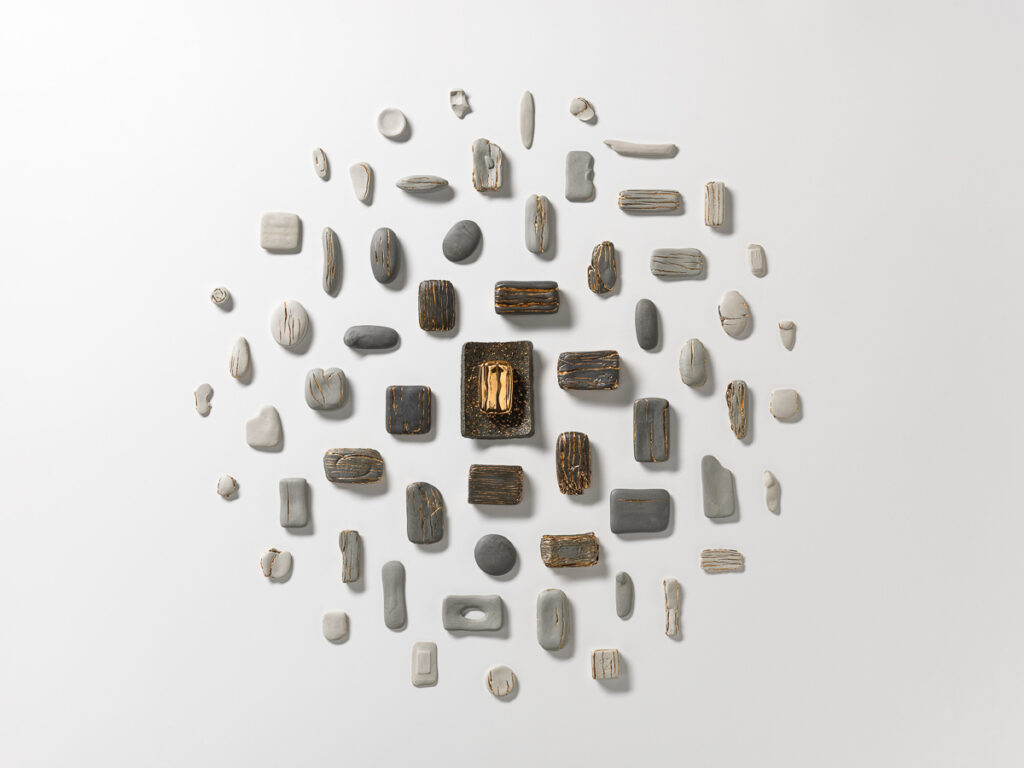 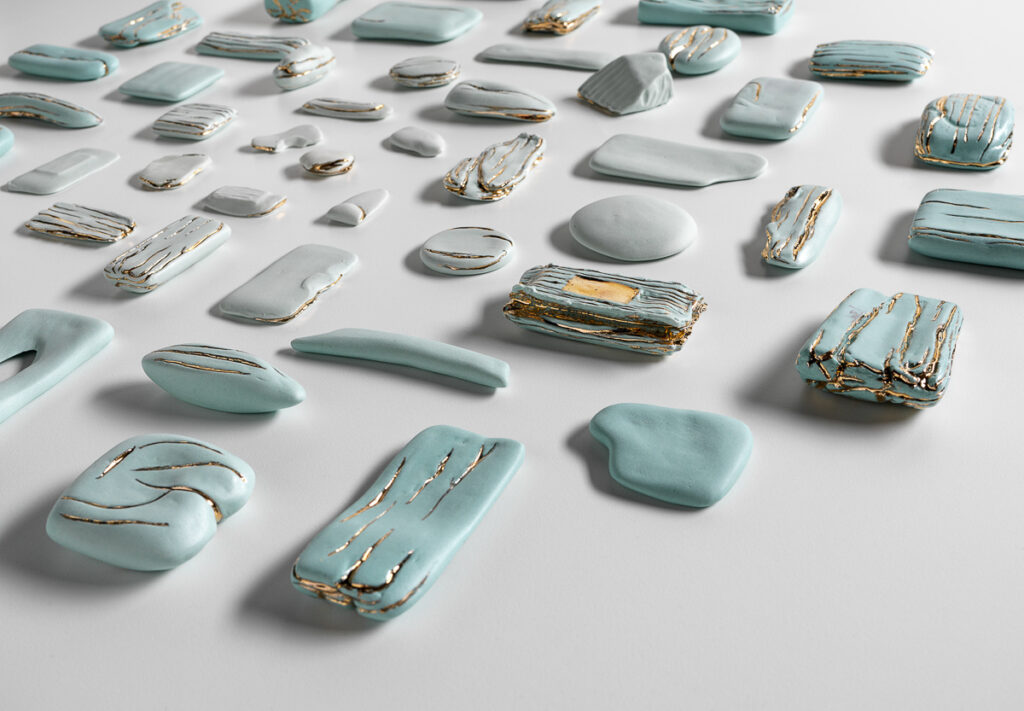 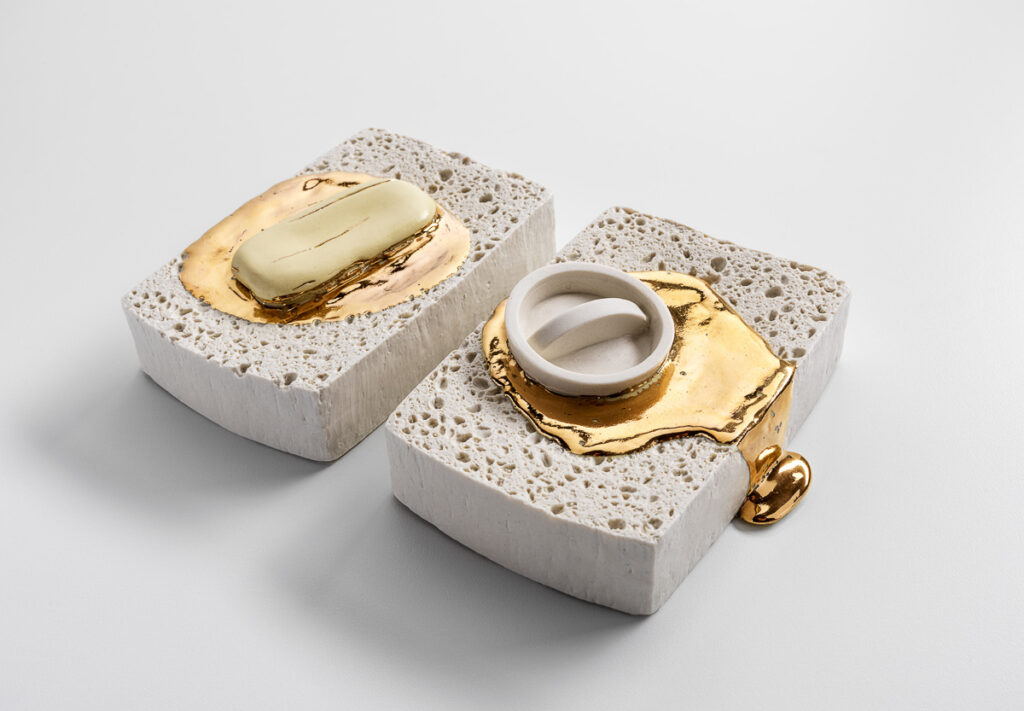 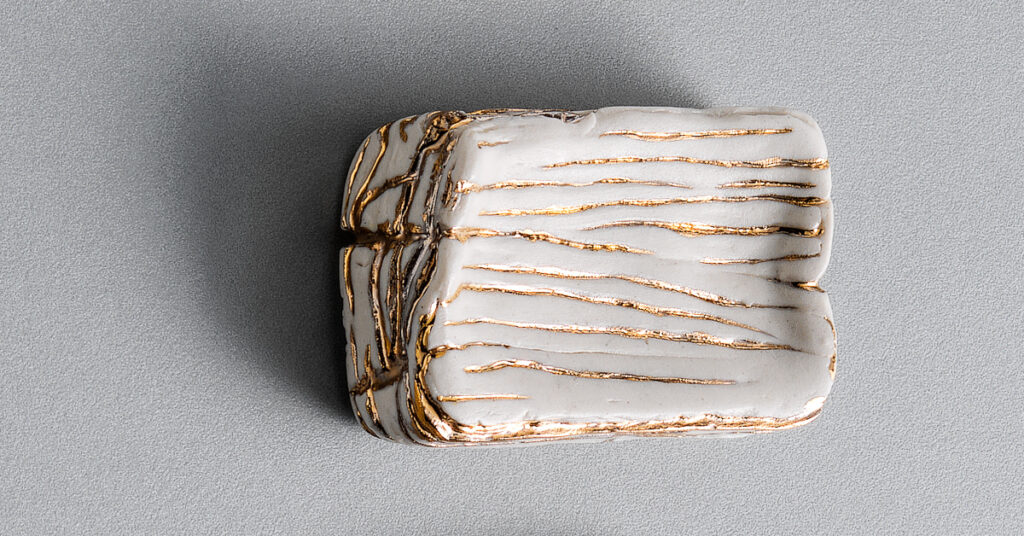 ✿ Besides installations, do you sell them individually? How do people use them?

I mostly sell them as multiples and larger groupings of objects and installations in exhibitions at various venues and via my representative gallery (Sabbia Gallery, Redfern, NSW). I have in the past sold them individually, in a limited capacity. I produced a limited series of signed and editioned Covid Keepsakes, 20 individual commemorative porcelain soaps to coincide with the exhibition Sunlight for a pandemic, 2021 at Hugo Michell Gallery (Adelaide, SA). In the traditional sense of the word, they’re possibly not considered terribly useful objects. I wouldn’t like to assume how collectors of the works use them, though I expect they live with them, look at them: the many reasons we choose to acquire and surround ourselves with art objects. They tell us stories about ourselves and others. Maybe some folk prank their visitors and guests.

✿ You mention “ghost objects”. What do you mean by this?

I have come to refer to many of the objects I make (in particular the porcelain casts of used soaps) as “ghost objects”. Working primarily in porcelain, I harness the mimetic qualities inherent in clay through the magic of slip casting. Traditionally an industrial process used for creating multiples, slip casting involves the creation of plaster moulds of originals (for example used soap, towels, buckets). Liquid clay slip is poured into the cavity of the moulds and left to rest for 5-15 minutes. Plaster is a naturally thirsty material and drinks away the moisture from the liquid clay, creating a porcelain skin within the mould cavity. The excess clay is poured out once the skin has reached the desired thickness, the liquid slip turning solid becomes a precise memory of a past form: a ghost. The casts are a memory of the past form, like a tangible whisper or echo of that object, eternally preserved and remembered but subtly changed. 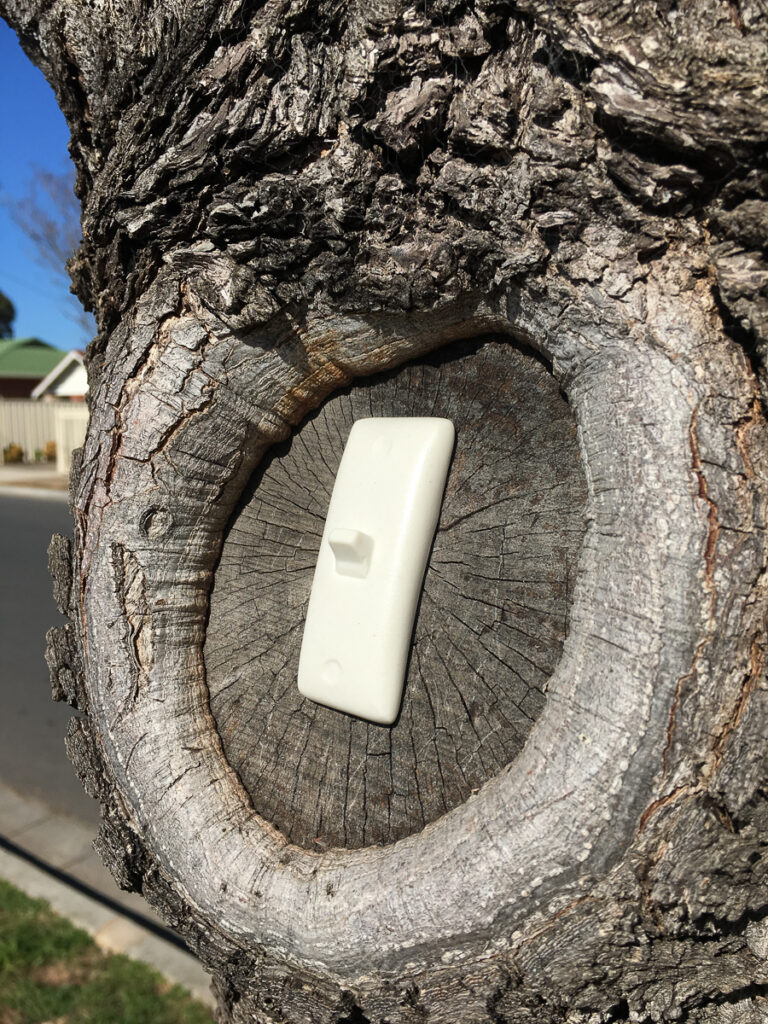 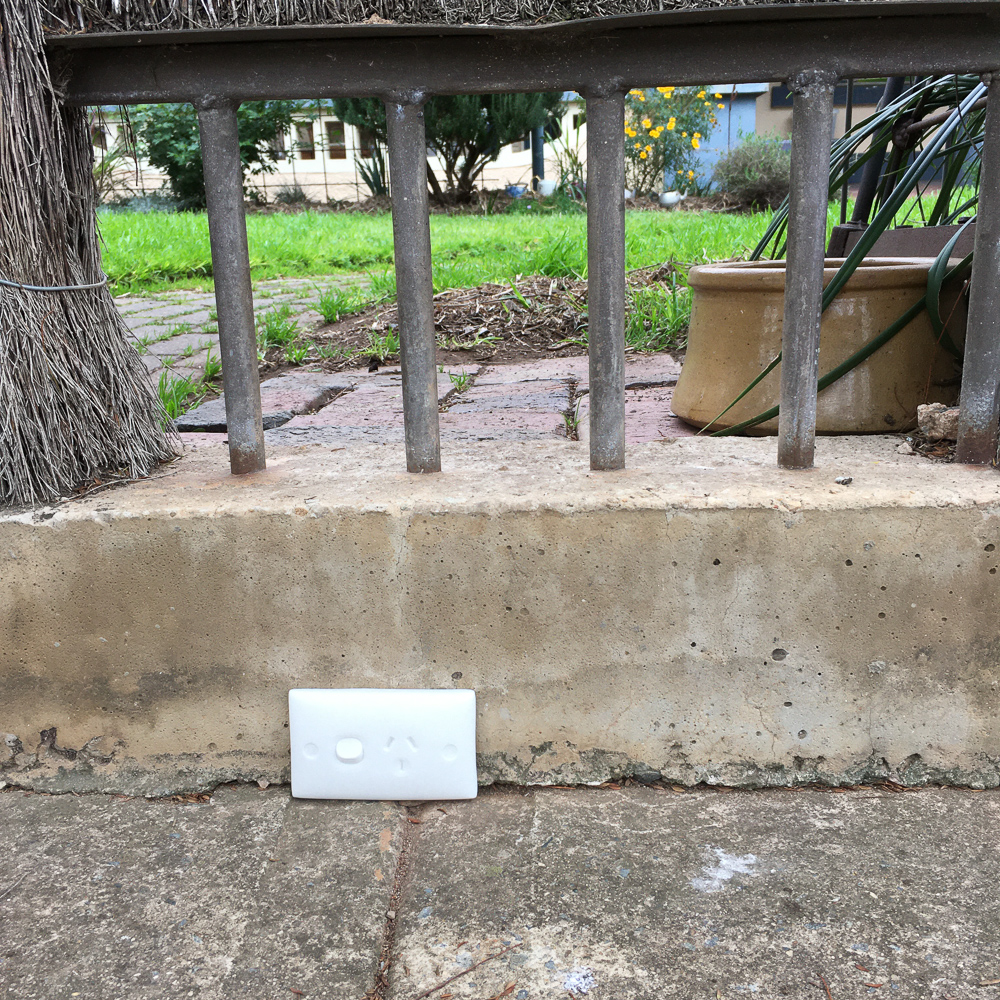 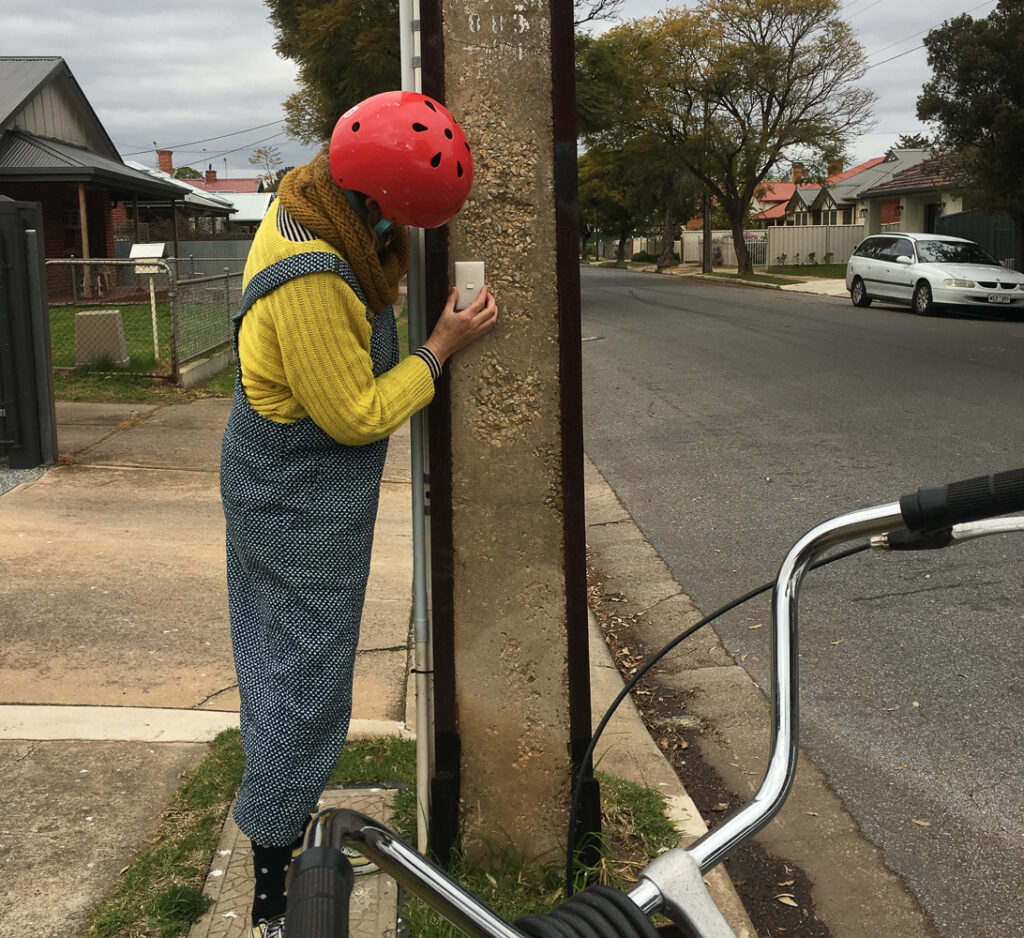 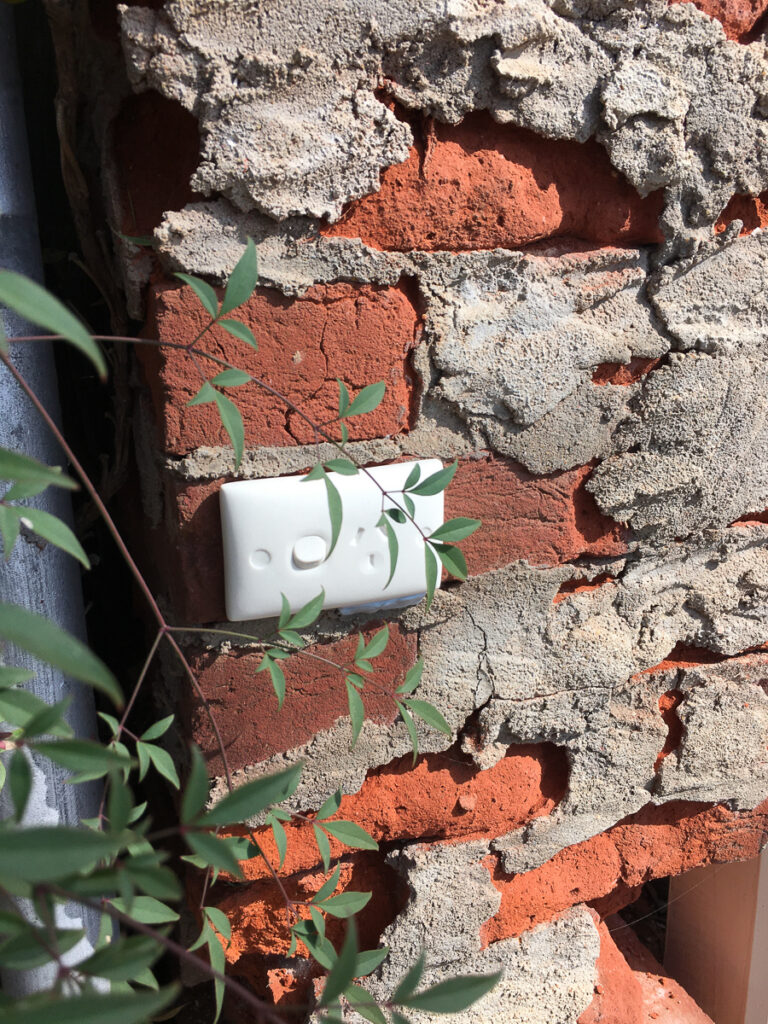 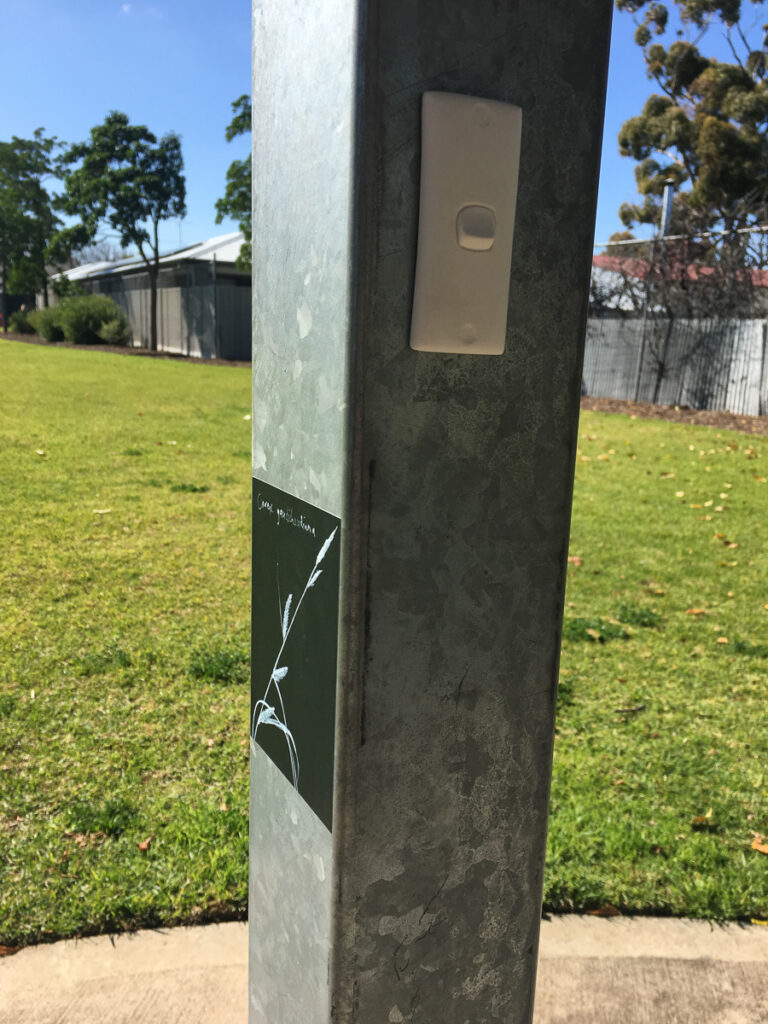 ✿  How does Small gifts for street corners compare to graffiti or stencil art?

Small gifts for street corners came about in 2020 during South Australia’s first covid-19 lockdown. Working collaboratively with Louise Flaherty, an artist and friend living in my local neighbourhood, we playfully gifted work to the streets of our neighbourhood as part of SALA Festival 2020. United by a keen eye for observing the small and unnoticed, Louise for remembering the remnant grassland that once existed in the Western suburbs of Adelaide and myself for noticing the invisible everyday and ordinary. We approached local businesses and residents about installing small artworks for passersby to uncover. A wink to those noticing the small things.

Louise created ink drawings of local disappeared plants reproduced onto outdoor UV stable vinyl and I produced slip cast trompe l’oeil porcelain light switches and power points. Particularly at that moment of uncertainty and isolation, it was an opportunity for us to engage with our community, making small offerings and gifts where perhaps none were expected, but greatly relished. It was a way to offer and feel a connection when we were all socially distanced.

Small gifts for street corners exists in the same spirit of claiming back the streets to make a mark outside the confines of the white wall of the gallery, a democratic gallery space of sorts. Albeit a much quieter gesture and perhaps without the overt political discourse and messages graffiti and stencil art has become known for. The majority of the works were also installed following the seeking of approval of local businesses and residents, which traditionally isn’t in keeping with the spirit associated with graffiti and stencil art, often done clandestinely in the wee hours of the night.

✿ What does this project share with your gallery work?

The works I have produced and installed around the streets of various cities and towns here and abroad, begin in the studio and are executed with the same level of care, consideration, time and attention to detail as those that are exhibited in a gallery. The themes within the work for the street and gallery crossover and intermingle, and ideas of the multiple exist between both creating a bigger voice with the repetition of many.

The physical process of exploring the streets searching for locations to place the work is a process full of playfulness—an adrenalin rush—and a sharp contrast to a measured and rhythmic day in the studio. There is a duality in the process of making and placing the work, the process and craft extending beyond the studio. The fragility and preciousness frequently connected with the material gives way during the action of placing these familiar objects into public spaces. The anonymity involved in the action requires a letting go, allowing a certain detachment from the work. Sometimes the switches remain. Despite the city council cleanups, their banal quietness slips under the radar. The urban streetscape offers an alternative space to unexpectedly encounter the pieces. I’m delighted when I encounter or visit them to discover the grubby finger marks of all those who have attempted to flick the switch.

✿ What else has influenced your work?

It’s a fairly familiar tale of most artists and craftspeople, I come from a family of makers. My mum is an incredible seamstress, always a mouth full of pins and a measuring tape slung about her neck, and my dad and grandpa built stuff in their spare time in the shed, my dad welded together the crutches he moved about on, made trailers and trolleys and generally solved problems with ingenious designs. As a child, I saw and understood people always making and solving problems with their hands, and I was given space to do the same, to develop a confidence with my hands and materials and for following the rules of craft and process and learning how to test and break those rules. 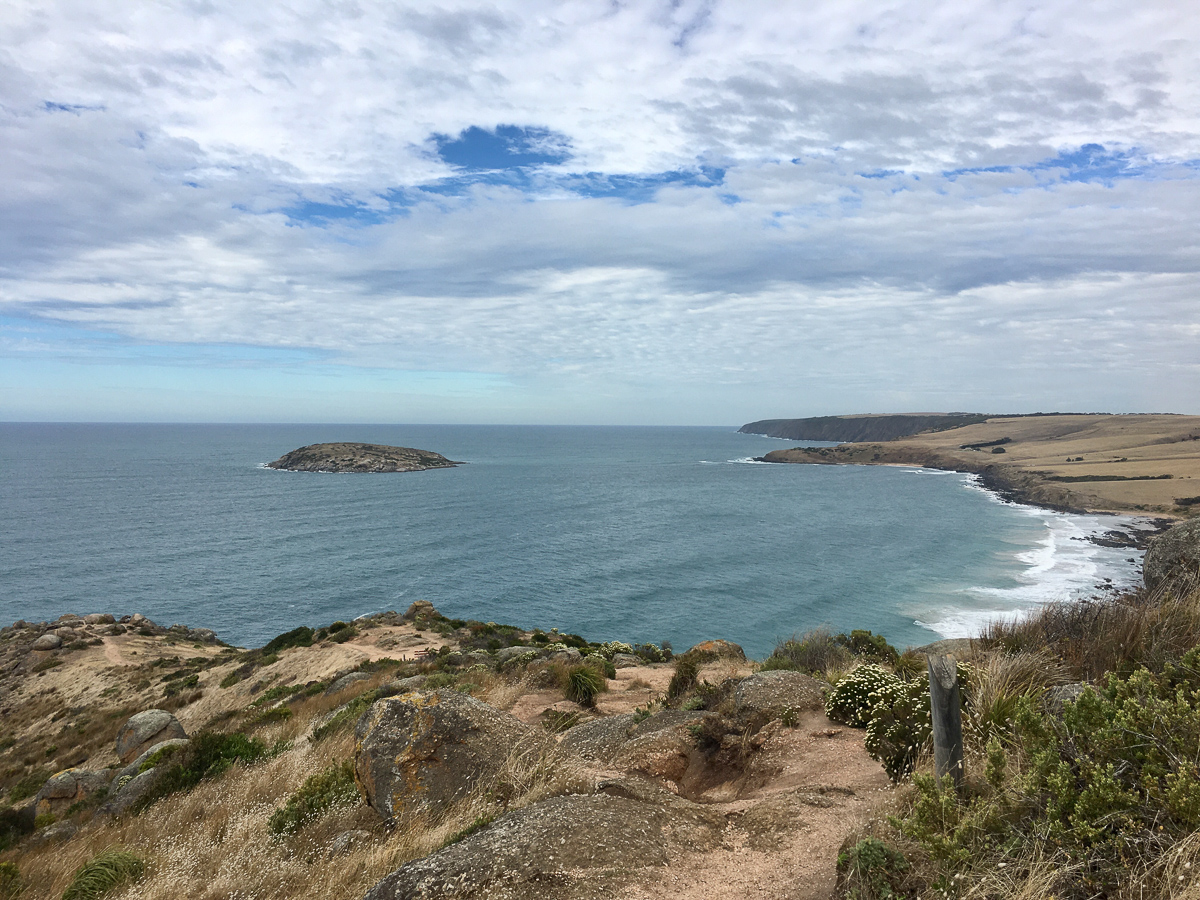 ✿ What’s an interesting local feature from where you make your work?

My family and I have recently fulfilled a long-held dream to flee the city and pursue a life by the coast. The Fleurieu Peninsula, Ngarrindjeri land, is where I now live and work. A short 15-minute walk from the studio along the shoreline of the protected bay known as Encounter Bay or Ramong, as it’s known to the Ramindgeri people, brings you to Longkuwar, known to many as The Bluff (Rosetta Head). A granite landmass created thousands of years ago from magma squeezed up from deep in the earth.

Walking to the top rewards you with beautiful views along the coast East towards granite Island and stretching off into the far distance of the mouth of the Murray River and Coorong, whilst views off to the South West look across wild steep cliff granite coastline. During the cooler winter months, this stretch of coastline is visited by humpback and southern right whales migrating up from the cold southern Antarctic waters as part of their breeding cycle, coming to either find a mate or to give birth and raise their calves in the protected bays and coves.

The Ramindjeri people of the Ngarrindjeri nation are the traditional owners of this land, caring for it over generations and for thousands of years. The Ramindjeri are coastal people and tell a creation story of Kondoli the Whale, explaining how fire was first obtained. I am new here, I have much to explore and learn. 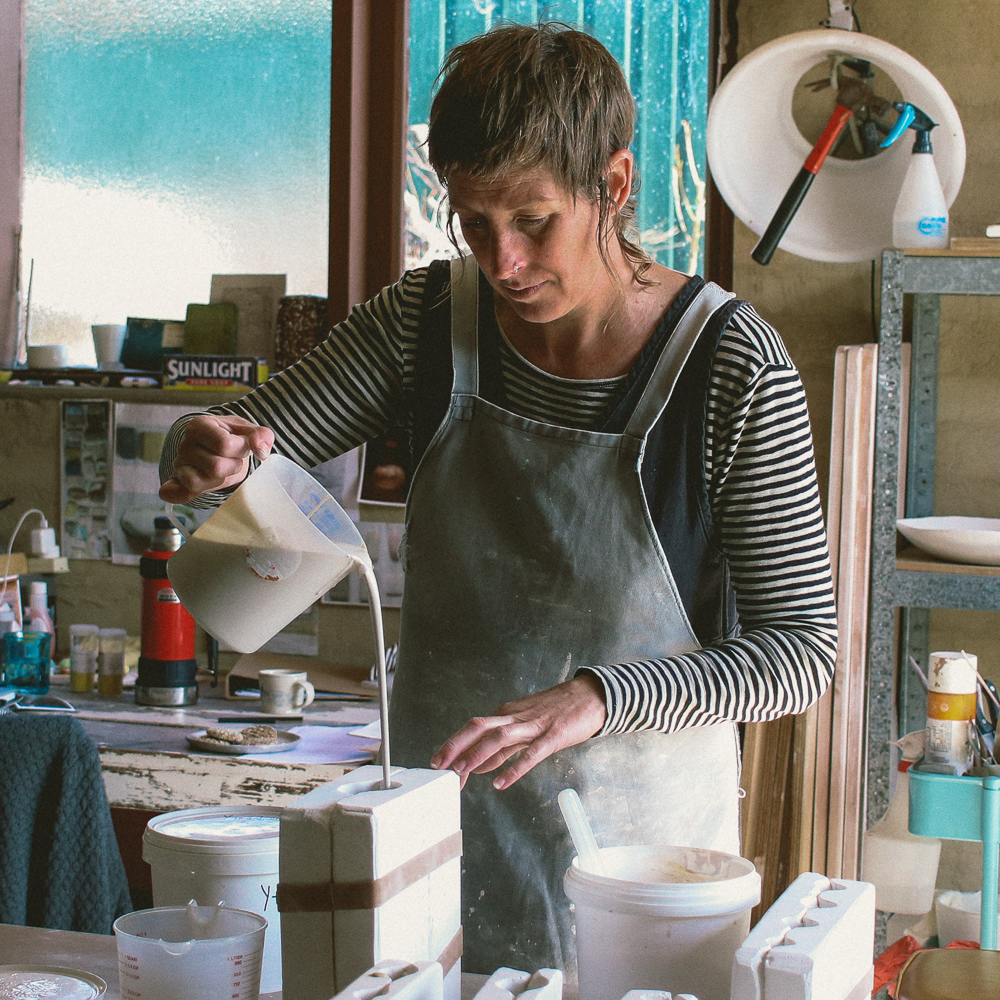 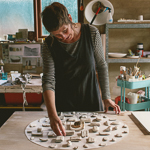 honor freeman is an Adelaide based artist whose practice utilises the mimetic properties of porcelain, crafting objects that belie their materiality and purpose. freeman completed her studies in 2001 at the South Australian School of Art. Following graduation, honor took up an Associate position and Tenant residency in the ceramics studio at JamFactory Craft & Design. Her work has been curated into major exhibitions at institutions throughout Australia. In 2006 freeman travelled to Chile to exhibit and participate in The South Project, continuing her project on/off/on, installing porcelain light switches and powerpoints clandestinely in public spaces. Most recently she was invited to undertake the Guildhouse Collections Project at the Art Gallery of South Australia, the outcome of this residency Ghost Objects, was exhibited in 2019 as part of SALA Festival. Follow @honor.freeman and visit honorfreeman.com.