Cantarino: Reanimating the whistling bottles of the Andes 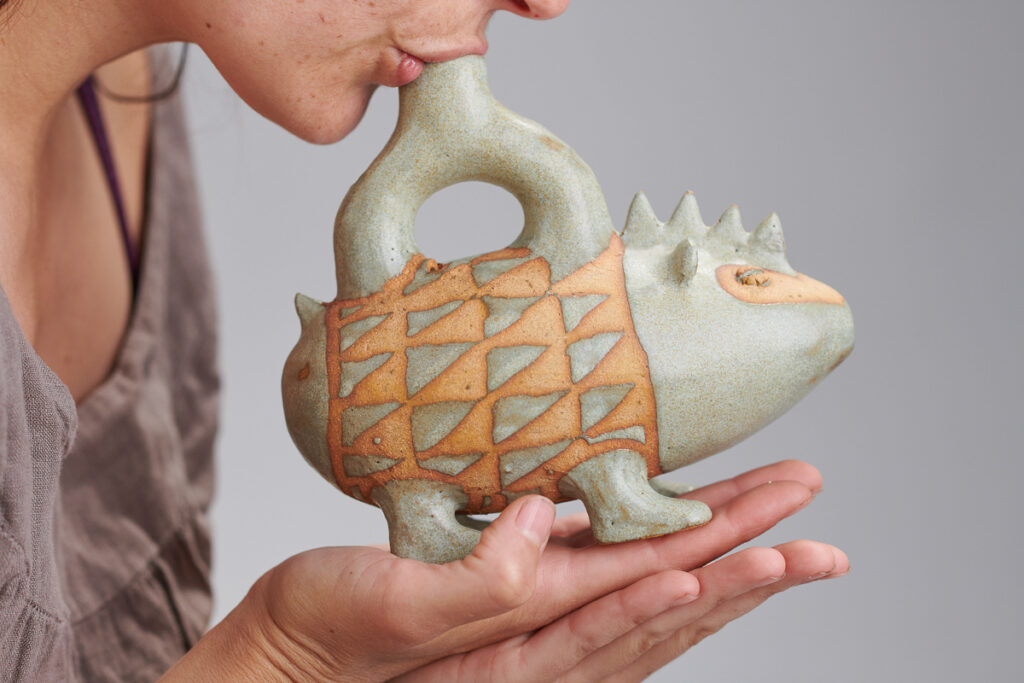 Francisca Gili Hanisch revives an ancient object that invests water with music for the afterlife.

It is a gurgling, intense and melodic whistle that transports us to remote times of the pre-Hispanic past. There is a great silence in the room, when Francisca Gili closes her eyes, concentrates, and makes her Whistling Bottles (Botellas Silbadoras) sound, either by gently rocking them, since the water inside generates the sound or by blowing into their necks. The artist shares this experience at the Museo de Artes Visuales, where she unveils a project that she has been carrying out for the last year. Its objective was to create a contemporary craft proposal that seeks to reinterpret the Andean heritage of the pre-Hispanic Whistling Bottles.

In the American continent, pottery production has five thousand years of history. Over the course of this time, ceramic containers have served multiple functions. Bowls have housed food and drinks, different types of pots have been used to cook and ferment food, and large urns have sheltered the relatives who travel to the Beyond. Some of these uses have remained to this day and others have lost their continuity, being buried under the silence of the earth. Hundreds of stories are interred there that archeology helps us unveil. This is the case of the Whistling Bottles, whose existence we know thanks to their protection in numerous pre-Hispanic tombs that were excavated. Today, these valuable objects became important collections in different American countries and even on other continents. These are various types of containers that included the integration of whistles in their design: “There are single, double and even three containers or ‘bodies’”, and the principle of communicating vessels intervenes in their creation. Some have the heads of snakes or monkeys, or of people, and whistles are often hidden inside of them ”, explains the artist, who in her project managed to encompass Whistling Bottles in all the splendour of their variety, from the most simple to the most complex. 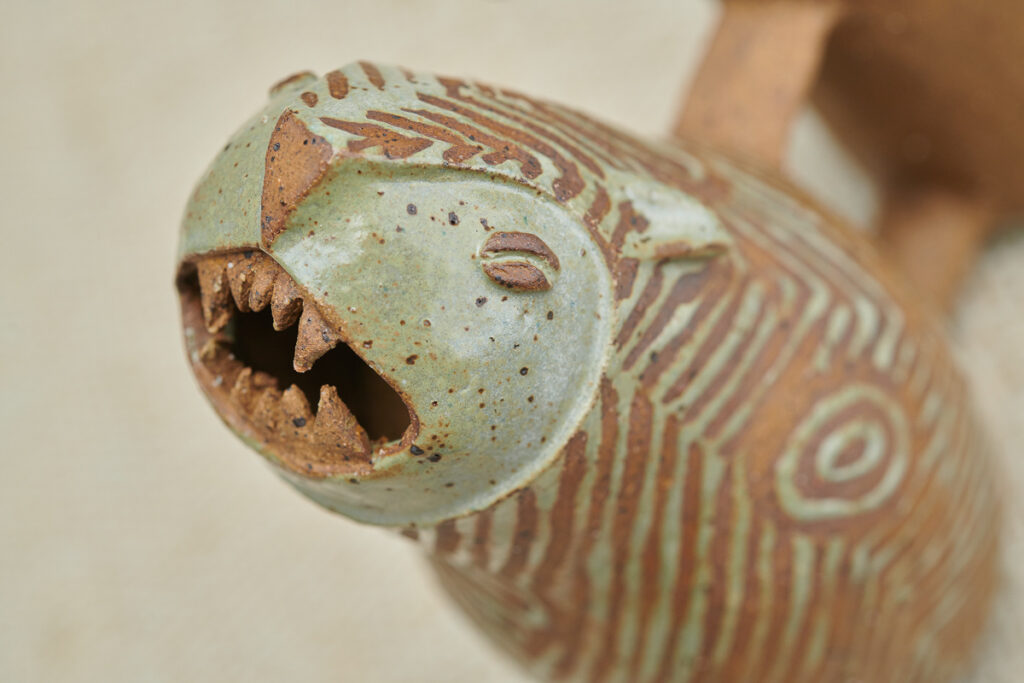 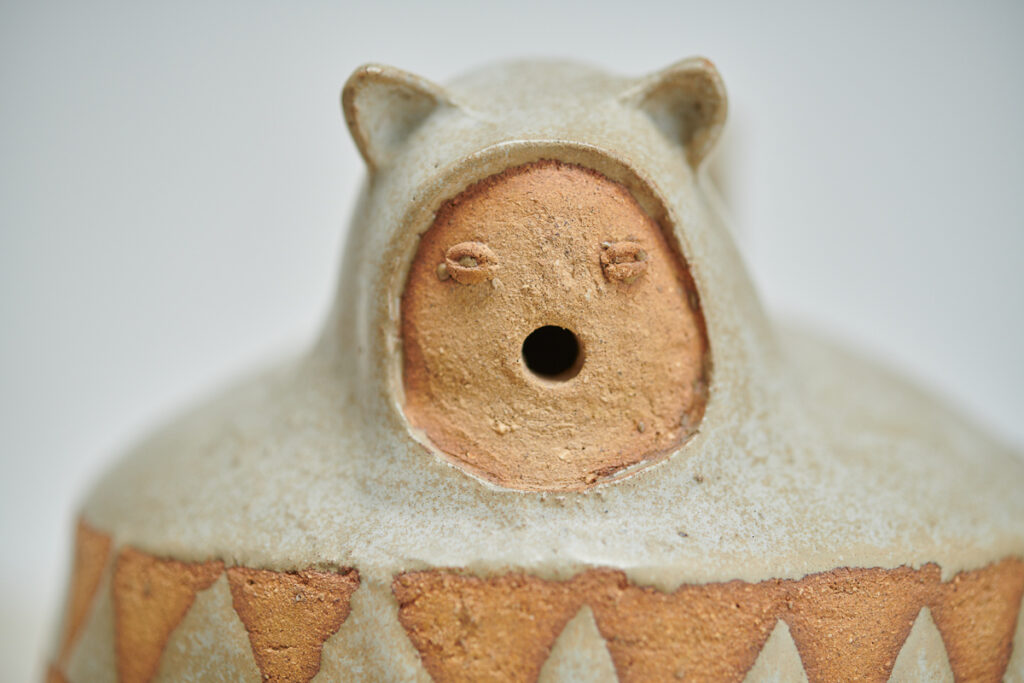 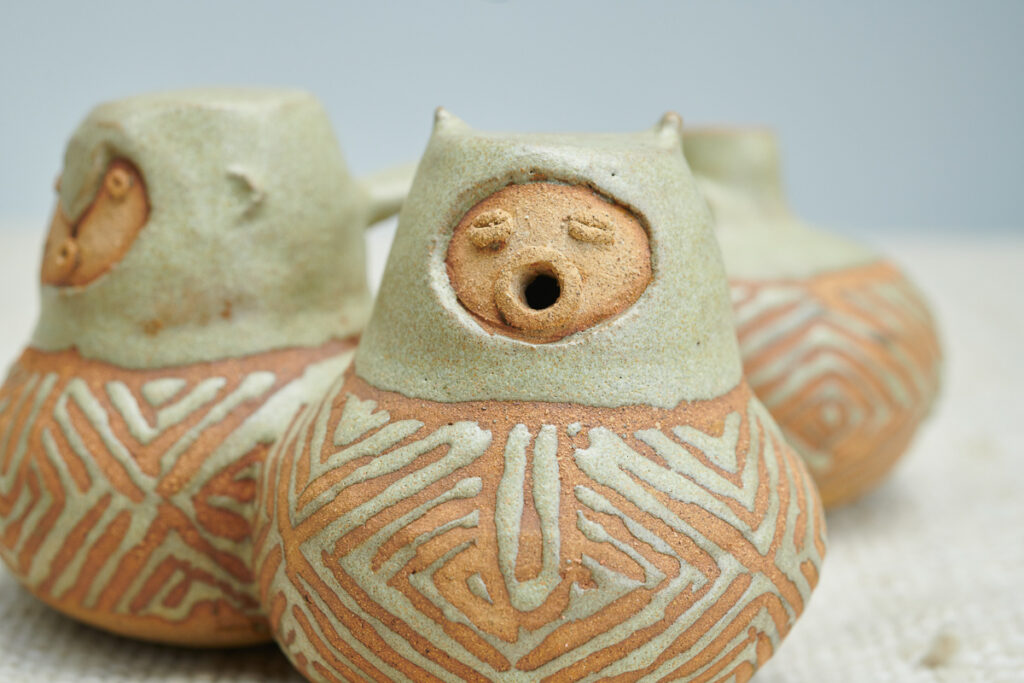 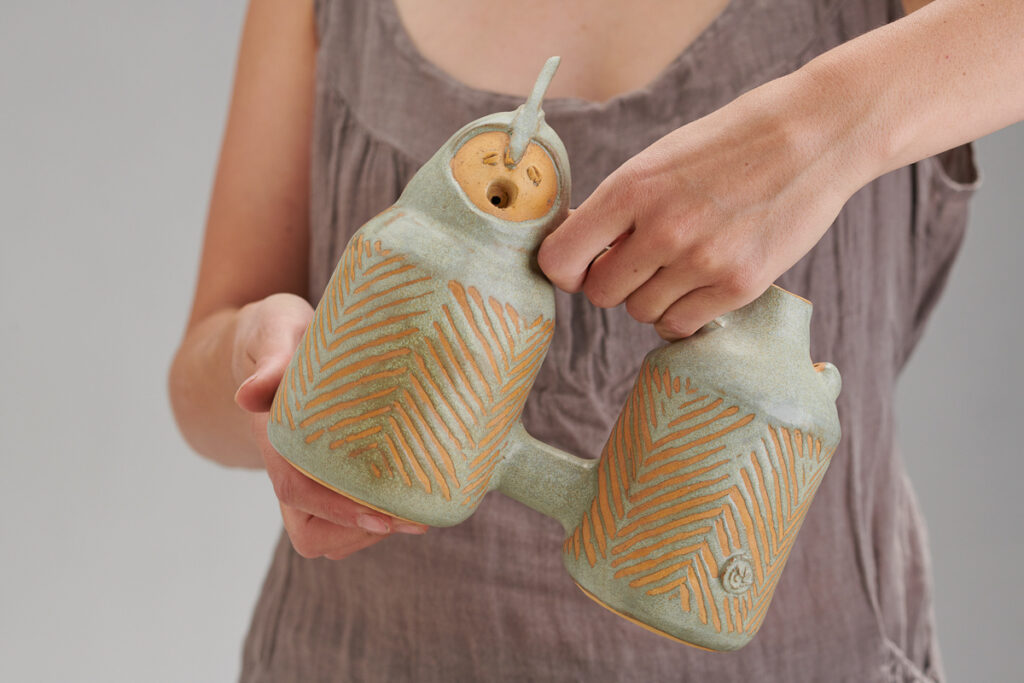 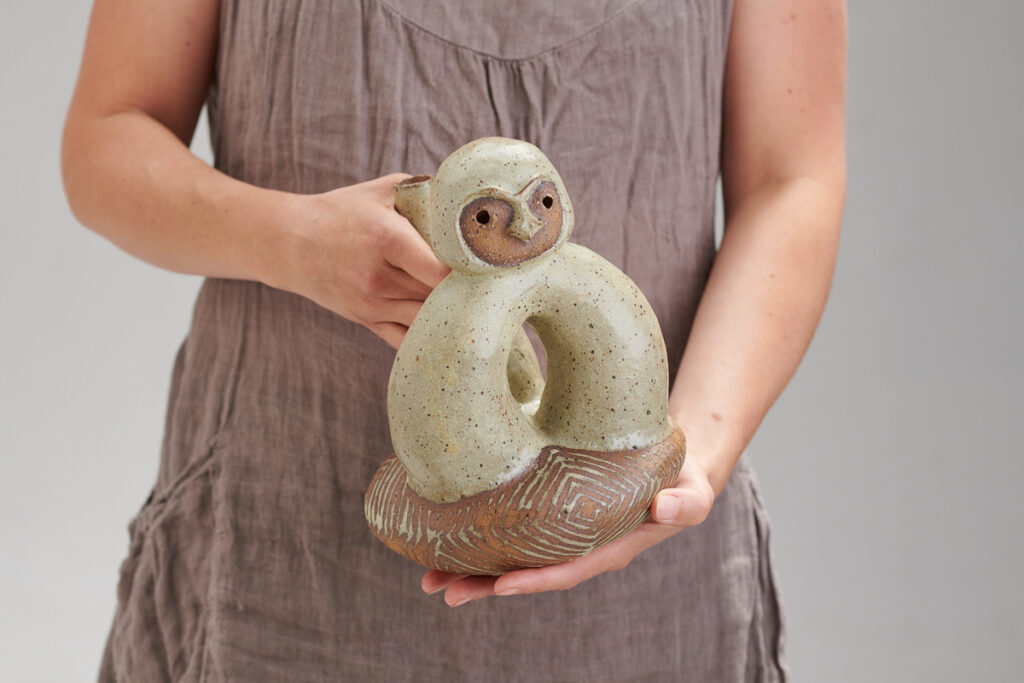 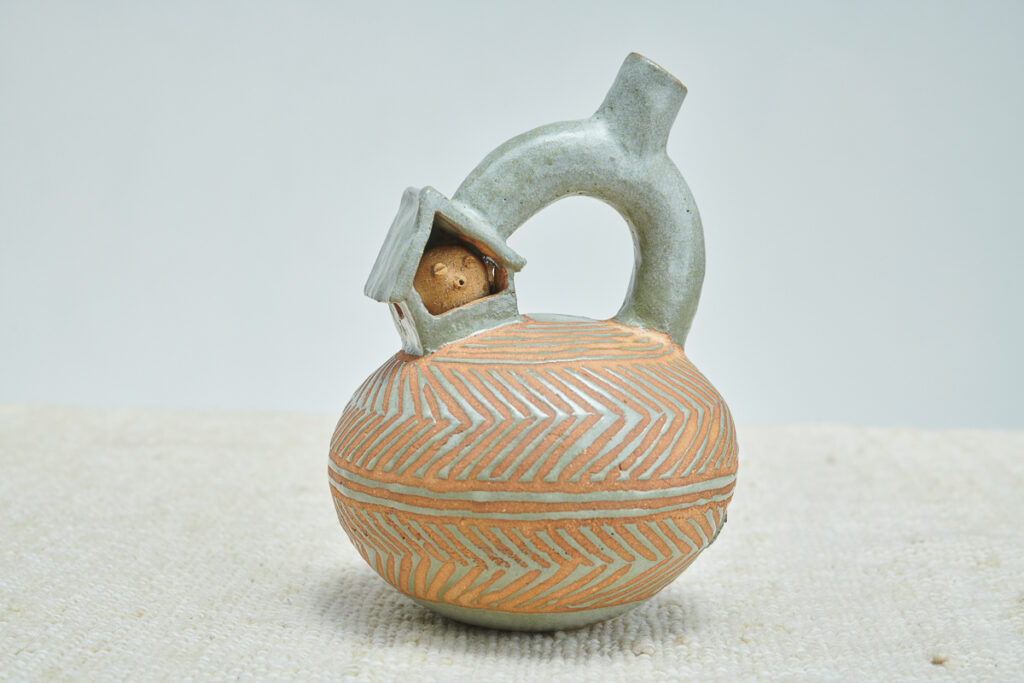 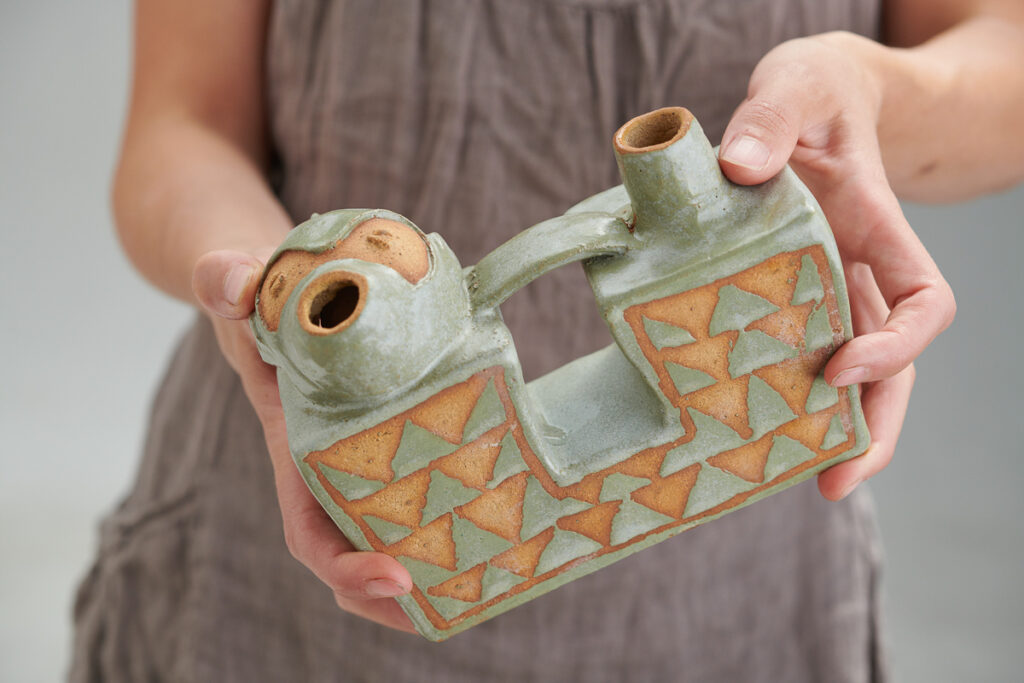 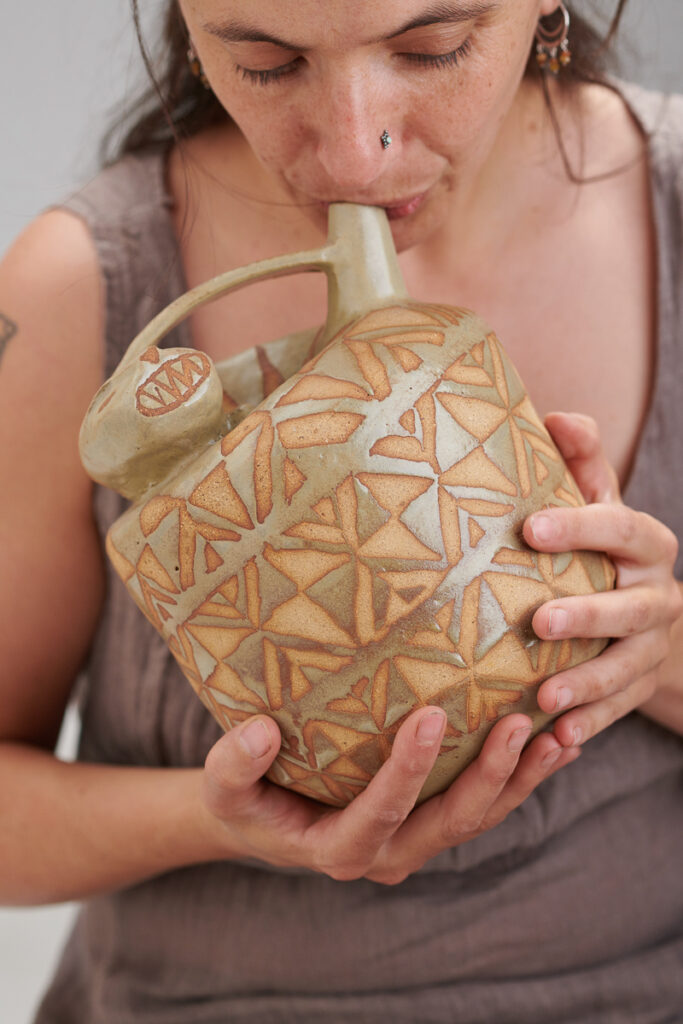 It is estimated that the clay instruments arise from 1200 BC, when the excellent artisans of the Chorrera culture, who inhabited the coast of Ecuador, began a fascinating path of exploration in the universe of clay. They began by exploring ceramics and their sonic qualities, thus creating the first Whistling Bottles. Later, this knowledge was disseminated before the arrival of the Spanish, and spread along the coast of the Andean territory, which today includes Ecuador and Peru. Various cultures such as the Machalilla, Jama-Coaque, Vicus, Bahía, Moche, Recuay, Nazca, Lambayeque, Wari, Chimú, Chancay and Inca, were the protagonists of these complex pottery developments, and witnesses of their use.

This archaeological legacy has been deeply studied by José Pérez de Arce, musician and candidate for a Doctor of Latin American Studies, who has been the teacher of Francisca Gili. He has taught her about the great organological variability and technologies to generate sound that this field of pottery presents. In addition, he is the founder of La Chimuchina, a group that aims to rescue and reinterpret ancestral Indo-American music, in which the artist participates with her own instruments.

Francisca tells us that “musical instruments, in the indigenous perspectives that have been preserved, allow the generation of communication with other species, with non-human elements, or with divinity. That is why I intuit that these pieces were used in rituals and ceremonies, both for their ability to emit sounds and for their use as a container, where the sounds must have probably had a propitiatory action on the contained liquids ”. The artist reflects on the pitcher as a container and on the possibility that the Whistling Bottles give song to water. He says that the first time he heard one of these pieces he was fascinated, and that, motivated by the play on words that arises from this singing and enchanting jug, he decided to name the series created “Cantarino”.

Imbued with the knowledge she has acquired, she draws on Amerindian notions of thought to give her work a conceptual imprint. Thus, she thinks that these Whistling Bottles, in pre-Hispanic times, were considered living beings, since, at present, in the indigenous thought of the Andean world, ceramics are understood as animate. “When one of these artifacts is made, a being is created and raised, it gives them the breath of life, what in Quechua is called Camay”, reveals Francisca.

At the same time, she emphasizes that in the Andean traditions where miniatures of animals, beings or things are made, as is the case with the Whistling Bottles and her work, rather than apply a representational logic, as in a photo or a painting. In our culture, there is the belief that creative and enabling forces linked to what is recreated are condensed in the miniature. These representations are called Illas or alacitas, and the classic ekeco Andeanis a good example.

A journey to the roots 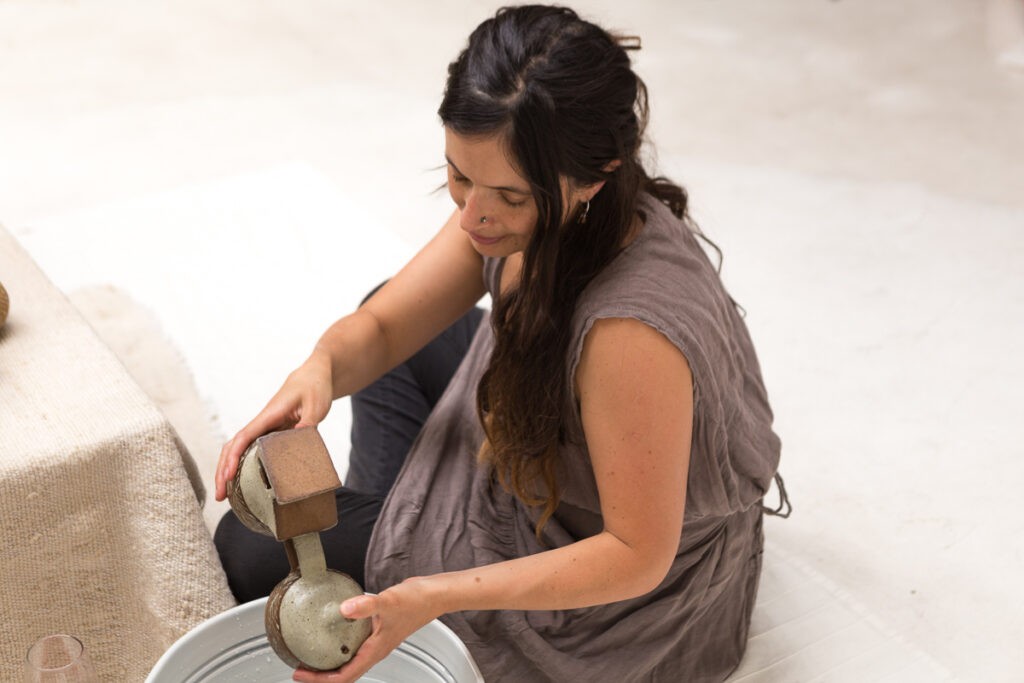 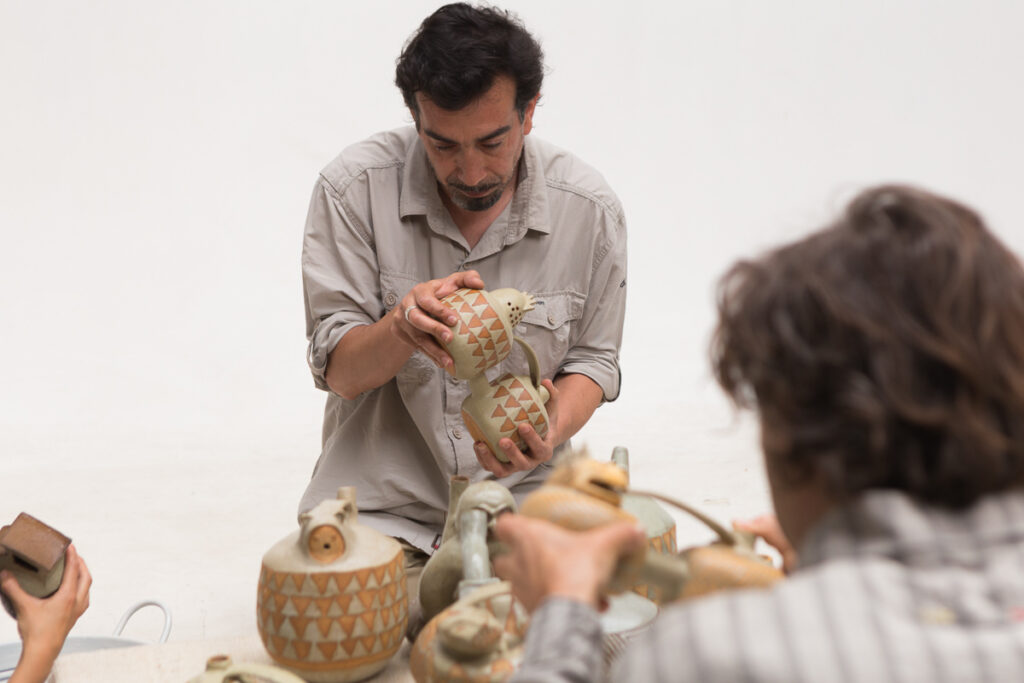 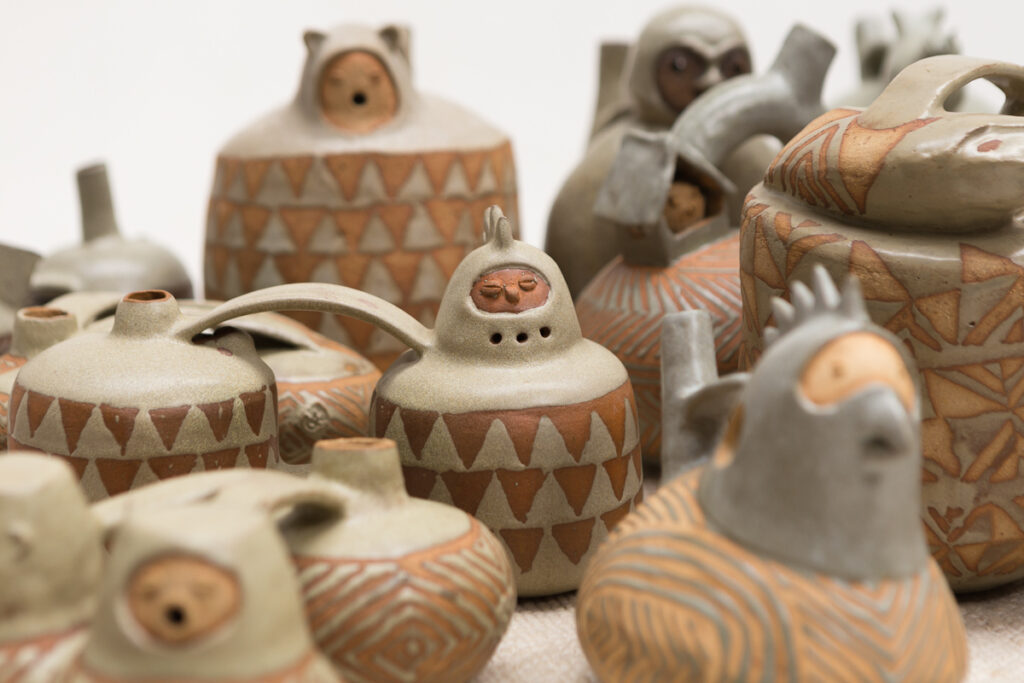 If it can be said that the instrument par excellence of the African continent is the drum, there is no doubt that the American one would be the flute. There are them in every nation, in every ethnic group on this continent, long before it was called America, and finally, the Whistling Bottle could be considered a variant of this musical instrument.

Aware of the importance of learning this technique that was discovered thanks to archaeological excavations and the joint work of researchers and artisans, Francisca Gili went to do a residency in Peru with the teacher Alfredo Walter Najarro, in 2017, thanks to the support of Fondart Ventanilla.  Alfredo is a potter specialising in replicas of archaeological musical instruments, and has spent decades working in collaboration with researchers from the National Museum of Archeology, Anthropology and History of Peru. Thanks to this, he has been able to know the qualities of original pieces and experience the techniques that allowed the ancient potters to create the Whistling Bottles.

Once the technique was acquired, Francisca sought to reinterpret those millenary works with today’s techniques available across the world, such as stoneware and the application of enamels. Combining these techniques, she achieves a particularly aesthetic result with soft colors, bringing these pieces closer to a contemporary artistic language. “Some archaeologists hypothesise that in the past, ceramics, being considered living beings, were dressed with designs similar to the clothes they used at the time, therefore, in this contemporary proposal I have also sought to dress all the specimens created. Similarly, in the Amazon, objects adorned with abstract symmetrical designs are understood as beings endowed with humanity; so I have sought to explore the possibilities of symmetry to compose the textures in these outfits ”, explains Francisca.

In her compositions, she uses a wax resist process, prior to the use of enamels, to apply the designs to her pieces; something similar to batik.

She produced twenty pieces thanks to the Fondart project that is taking place this year 2020 in la Línea de Artesanía. Although she confesses that several were abandoned, since some did not manage to emit sounds, those that make up the final series stand out for their beauty as vessels and for their refinement as musical instruments.

The plan is to mount a travelling exhibition, holding more workshops that allow the dissemination of the Andean, pottery and sound knowledge that sustains his creative work. These workshops are interactive events, in which those interested are given the chance to experience first-hand the audible worlds and soundscapes that can be created with the bells that emanate from these unique instruments.

Through these workshops, Francisca Gili seeks to awaken an awareness regarding the urban or western ways of living that have been imposed in our territory, in contrast to the ancestral knowledge inherited by archeology, thus promoting the continuity of pre-Hispanic traditions in the present. “Their whistles seek to awaken the memories of an affective dwelling with our Andean territory ”, Francisca Gili.

The text is by Marilú Ortiz de Rosas and Francisca Gili; and photos by Nicolás Aguayo and Emilia Simonetti

Francisca Gili studied Art at the Catholic University, specialising in Restoration and then in Archeology. She is pursuing a Master in Archeology with a mention in Anthropology at the Universidad Católica del Norte. She is a member of La Chimuchina, a group born under the auspices of the Chilean Museum of Pre-Columbian Art that carries out a contemporary proposal performance based on the investigation of archeology and musical ethnography of Los Andes Sur. Regarding ceramic work, Francisca began modelling her first works a decade ago, and five years later she took classes with the ceramist and member of the Huara-Huara Workshop, Marcela Delgadillo. As of 2016, she began to devise his Seramika proposal, whose main activity has been the creation of ceramic series based on the Andean pottery legacy. Her creations have been included in the exhibitions «Blue», «White and Gold» and «Element», of ESTEKA, in 2016, 2017 and 2019. Follow @Seramika_

Marilú Ortiz de Rozas has a PhD in Latin American Studies and Literature from Université de la Sorbonne-Nouvelle (2001), France. She is a journalist from Universidad de Chile (1987), an art curator, writer and photographer.

The initiative is funded by Fondart, Línea Artesanía, and sponsored by the Museo Chileno de Arte Precolombino.