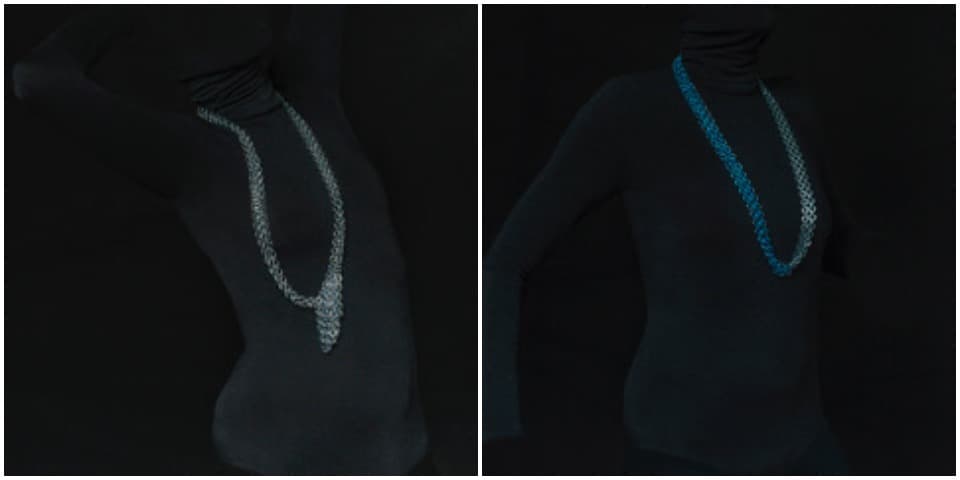 The Melbourne jeweller Carlier Makigawa was inspired by the Islamic architecture of Uzbekistan and produced necklaces that relfect a geometric intricacy of colour and form. Helen Britton adds her analysis of the work.

I visited Uzbekistan on a tour led by Susan Scollay who is an expert on middle eastern textiles, art, architecture and history. I had previously done a trip with her to Romania visiting Transylvania and learning about fifteenth and sixteenth century carpets, their symbols, colour-making processes and history. The influence of early ceramic tile patterns morphed into the carpets.

So the trip to Uzbekistan was also to include textiles. But I find that architecture is a greater influence on my work and the history of this country was impressive although bloody. Uzbekistan was influential in this body of work by way of colour, pattern and structure.

Although I was ill, I did get to walk and experience Tashkent, Khiva and Samarkand. The monuments were inspiring. I was in awe of the Islamic architecture, colour and pattern of tiles used inside and outside the buildings. The use of lapis lazuli, gold, coloured marble and coloured ceramic tiles amazed me. The geometry of their patterns was wonderful.

My previous work can be seen as three-dimensional plans and structures, but in this work I explored simple geometric pattern using hand made wire jump rings creating complex structures that moved over the body. Some of the pieces are like bags, more three-dimensional, and this is where I will continue to explore.

What does it take to make new work? Really new work? Courage of course, and some kind of trigger. A journey, a risk, unrest. Perhaps the patience to wait until circumstances are right, and the experience to know that only then the starting point appears, opening a labyrinth of surprise. That surge of recognition as the path unfolds, and then it is as though the work makes itself and one simply observes and facilitates this progression.

In 1991 Jenny Zimmer wrote, reflecting then on over a decade of Carlier’s practice, “Makigawa belongs to an electronically attuned, multimedia, post-mod- ern technological, theoretically complex age. She is free to span both backwards and forwards.” 1.Jenny Zimmer, Carlier Makigawa: Studies in Balance and Motion, 1991 Carlier’s practice now spans four decades, and for this very new work she has reached far back in time to take an ancient technique and recreate it in this very moment and make it her own; a gesture thrilling to watch. In 2003 Ted Snell wrote “the work in this show is an affirmation of an artist pushing at the boundaries of her own practice and in the process finding new confidence to develop ideas and forms that carry meaning that is both highly personal and concurrently accessible to a wider audience.”2.Ted Snell, Carlier Makigawa: Catch The Moment, 2003 This remarkable Australian artist reveals for her pleasure and ours the brilliant flexibility of the creative mind on its mysterious journey once the constellation of beginnings is right. This new work also reveals pushing the boundaries as a strategy of this artists practice, traveling to the unknown and returning full of the rich nourishment of inspiration.

We are familiar with the iconic images of Carlier’s jewellery, the theatrical balance between her constructions and the body in a dialogue of reciprocal definition. Judith O’Callaghan described this as “one of the most consistent features of Makigawa’s work … an insistence on formal definition…a balance between frame and content.”3.Judith O’Callaghan, Carlier Makigawa: The Flower and The Flame, 1996 In these new pieces the works have become flexible frames for the figure in motion, no longer poised balance but fluid play between the human form and shifting shapes. Previous works with their structural tenacity, frames delineated and vibrating with exactitude have now collapsed. There is still structure, but it is a loosened and flowing system. Closer investigation reveals pockets and seams of colour in the mesh, along with fragments of former constructions. We find a crucial link in logic to a lifelong interest in precision in the names of the works, “709”, “491” indicating the exact number of rings in the piece, all coiled by hand, carefully counted, linked and no stitch slipped. Though the technique is old, the material language is contemporary, and one that Carlier is fluent in: monel, niobium, silver, paint, materials chosen for their specific qualities in providing the best possible technical solution.

This is a brilliant shift in Carlier Makigawa’s work, away from what Anne Brennan wrote of then as a ”focus on frameworks themselves, allowing the beautiful precision of the wire to articulate three dimensional spatial drawings on the body.” 4.Anne Brennan, Hybrid, 2005 Those wires have rolled and coiled and become links and structure has become this intricate, sinuous mesh, with its roots in armour and protection, traded as a valuable along the ancient silk road, far back in time. Hints of this history can be found in mysterious, shimmering blues snuggling a variety of friendly greys, quiet strong bonds between colours that make the mesh look old and new. Visually these works span time and acknowledge an interest in treasuring what we have learned to make. Most importantly our impulse is to touch them. Collapsing like water, flowing over the human form, a delirious visual and tactile stream of enjoyment for Carlier and for us all.

Helen Britton is an Australian Artist and Adjunct Professor at RMIT, living between Australia and Germany.

Tonantsintlalli: Our Mother Earth
Jewellery for free
Nature and beyond - the artistic fashion of Grace Lillian Lee
Postcards from Home: Tapestries of Sri Lanka
Keste: Kazakhstan embroidery that celebrates nature
Shaping the divine in the lanes of Kumartuli
Good news from Afghanistan: Hadya starts her own business
Of uncertain value: The fragile beauty of epiphytes