The tinsmith and I shared no language 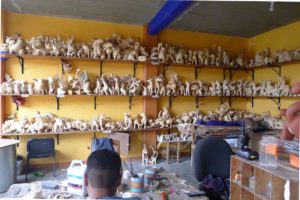 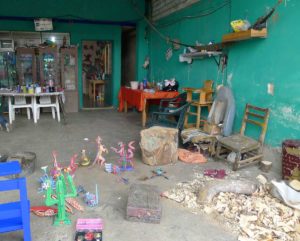 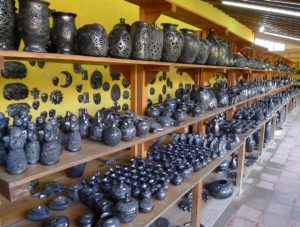 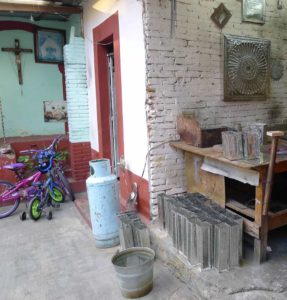 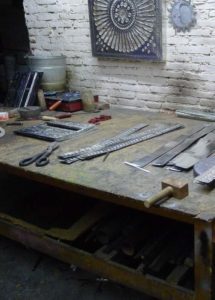 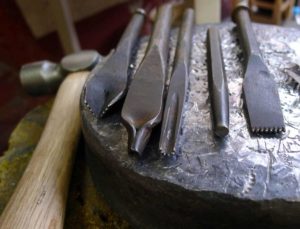 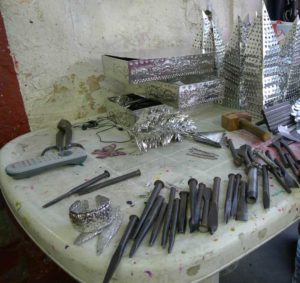 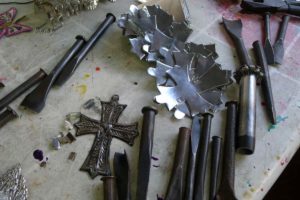 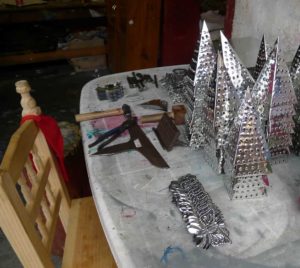 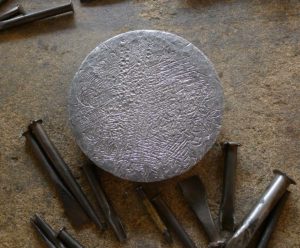 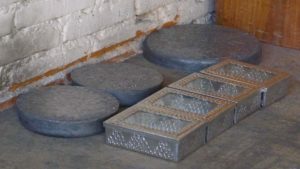 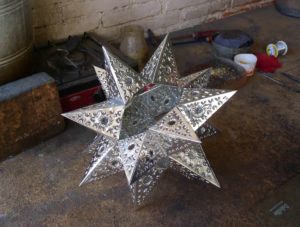 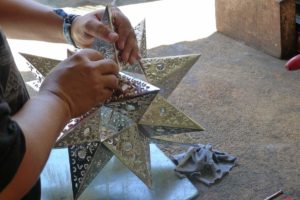 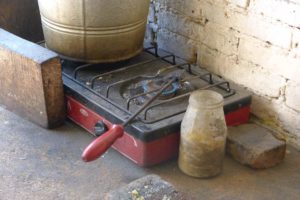 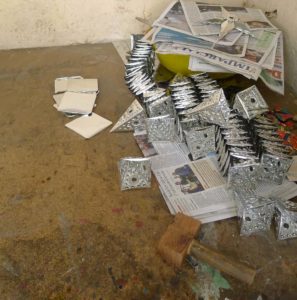 Forming the points for a star lantern 2013 photo Claire McArdle 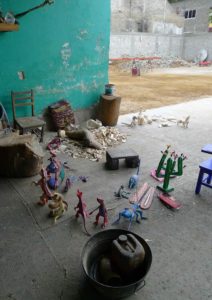 The tinsmith and I shared no language. Occasionally something would be translated for one or other of us by my newly gained friend who had a language in common with each of us. But mostly we got by with pointing, nodding and slightly exaggerated demonstrations.

I had come to Oaxaca in Mexico because I had heard of the diverse and expert mastery of many craft techniques. The city is surrounded by satellite villages in which many people specialise in a single handcraft. We took a collective taxi to some of the villages and wandered the streets to see who had opened their home studios for sales while they worked. This direct access meant that not only did you get to see pieces in progress but that all the money went to the makers.

We saw the carved wooden alebrijes, brightly painted with complex patterns, the Barro Negro black clay pottery with its lustrous dark sheen and the playful tinwork pieces being beaten into existence.

I was undertaking an artist residency in Oaxaca during this time. I met and befriended other artists from different mediums and from different parts of the world. I was drawn to the tinwork. The process had so much in common with the repoussé technique I had learned at university. For that process, a small sheet of metal is set into a tar based pitch mixture which supports the work. The metal is then dented in calculated locations by a specifically shaped punch to form three dimensional shapes and patterns. This also hardens the metal. The piece is then freed from the pitch and softened by heating with a flame, only to be reentered into the pitch for further forming. This process has spectacular results but is time-consuming. I liked the idea of a quicker approach without the messy and noxious smelling pitch.

The tin pieces or hojalata were made from sheets of tin coated steel. After one attempt at buying some tin had seen me deeply confuse an unsuspecting stationary store employee I was delighted when my friend at the residency suggested we have a class with the master who lived up the street.

The Tinsmith’s studio leads off the central open-air courtyard of his home. It had three walls with the fourth side open to the elements, which was a very pleasant thing in that part of the world. It was also an excellent and enviable form of ventilation for the fumes created through solder joining and colouring the tinwork. There were no audacious or complex machines to aid in his labour. His tools were simple and well worn. Handheld shears like a giant pair of scissors for cutting out the shape of the tin. A small gas stove to heat the copper-headed soldering irons. And surprisingly to me, round blocks of lead to support the work as it was patterned.

It seemed I had only ever heard bad things about lead. You only had to look as far as the petrol station to see the ubiquitous proclamation of unleaded. Meaning once it did contain lead and though it quietened engines it also became airborne and detrimentally entered the bodies of people across the planet. The obvious impulse was to ask the internet if lead could enter the body through skin contact and how much exposure would cause harm. But I had no internet on my phone here. So instead I reasoned that the Tinsmith had been doing this for many years and he seemed fine. So I should be fine considering my fleeting contact with the substance.

After this flood of apprehension had ebbed I noticed a small steel cabinet standing in the back corner of the workshop. It was a dark, inoffensive grey as might be found in an office. But this one had more than tax returns lining its shelves. It abounded with neat rows of steel punches, every one individual. Points, triangles, straight lines, curved lines, dotted lines of all lengths and widths. No punch had any recognisable motif. They were simple. And in their simplicity, they held an abundant potential to create.

The Tinsmith was jovial. He smoked cigarettes and smiled and swiped at the parade of bees that came calling. At one point he fashioned a makeshift flamethrower from an aerosol can to help them on their way.

Over the course of the lessons, we saw the Tinsmith and his relatives working in an almost blasé manner. But their casual attitude could be afforded to their repeated refining of processes to their maximum efficiency. They held several sheets of tin one on top of the other and hammered the punches through all at once, creating massive time savings compared to hammering each piece individually.

The Tinsmith seemed to have what so many strive for, a work-life balance. His way of making opposed the common mode of work I had been exposed to at home; that of the isolated maker. Alone in the studio or perhaps sharing with other makers but each with their own distinct practices. The Tinsmith’s workspace was accessible and communal. People had to walk past it to access the rest of the house and often they were put to work along the way. There were no walls rigidly defining and separating the space. You could walk a few steps and be gently baked by the sun or twinkled at by the stars.

Many of the tin pieces I had seen in markets and shops around Oaxaca were finished with bright, transparent lacquer. The Tinsmith had a selection of unlabelled jars where he mixed his own colours. Most bore the crusted rims of constant use and their smell when opened was acrid. It was quite a limited palette and after these classes, I looked more closely at the tin pieces prevalent thought out the city. I imagined that with further investigation it would be possible to tell which Tinsmith had made each piece, from the colours they mixed, the punches they used, the patterns they chose. Picking up minute differences lost on the uninitiated. But I did not possess this fine eye and most likely I never would.

The classes ended, as did my time in Oaxaca. The Tinsmith stayed on, hammering and soldering. Forming intricate shapes from once plain sheets. The closest we ever came to verbal communication was a transitory buenas noches. But we had the language of making in common and perhaps this doesn’t always need words. 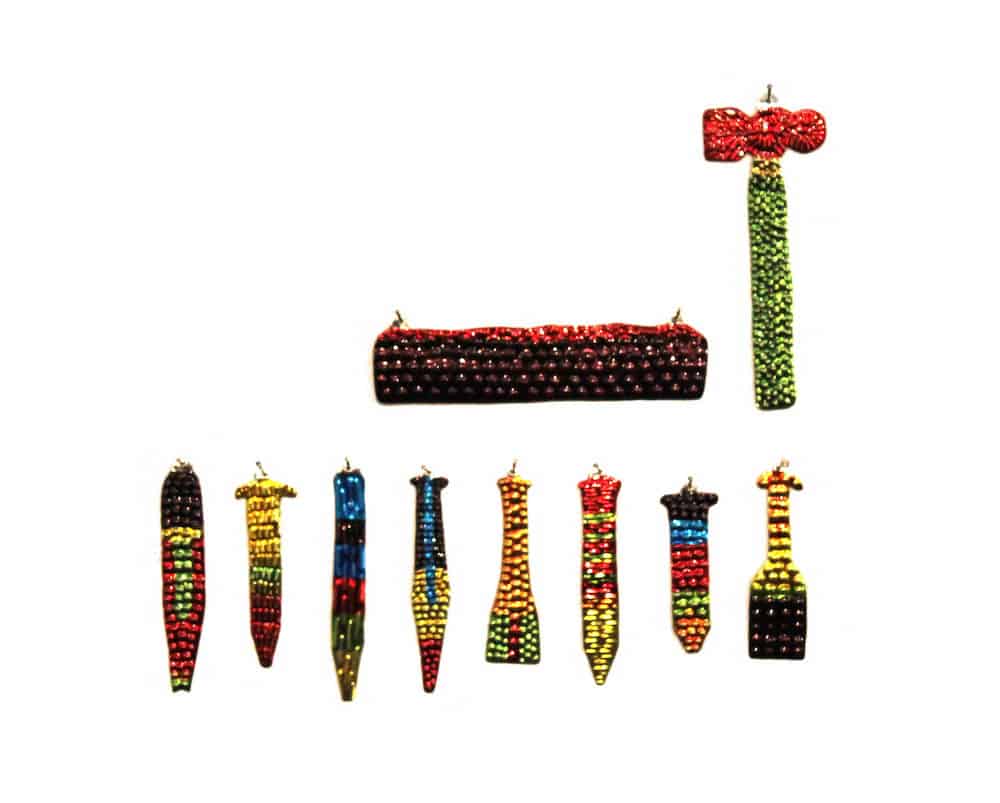 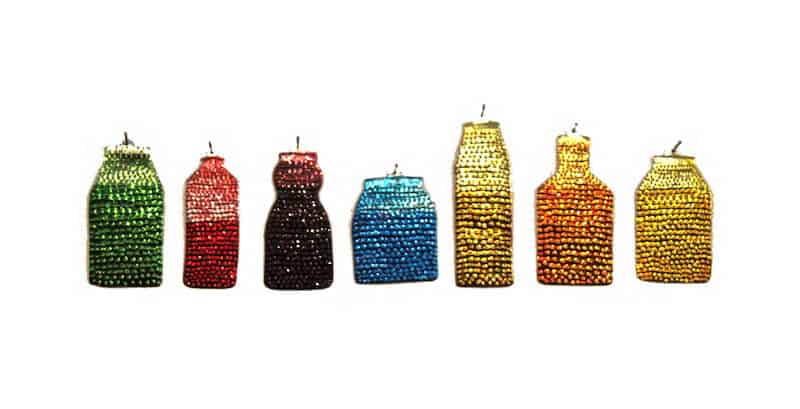 The Tinsmith who taught me was Miguel Ángel Agüero Pacheco. In 2002 he was awarded First Place as El Mejor Artesano de Oaxaca (Best Artisan in Oaxaca) by el Gobierno del Estad de Oaxaca (the State Government of Oaxaca). 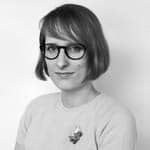 Claire McArdle is a jeweller based in Melbourne, Australia. She has held ten solo exhibition in Australia, Germany and Estonia. She was the winner of the Excellence Award at the Victorian Craft Awards 2017, and gained first prize in the National Contemporary Jewellery Award in 2016 and Contemporary Wearable ’13 in 2013.

Broached Recall: Bringing modernism to the surface
Learning from a master: Making bilas with natural dyes in PNG
21st century chinoiserie: A journey from Zibo to Sydney
“Only room for one in the house”: My Ankyianpoma language sticks from Ghana
Deep and shallow time meet in Jingdezhen
Lost histories: Inscription and Place
The Naked Tree: A tribute to Park Wan-So
Tracing trees: Processing land clearing through a jewellery practice