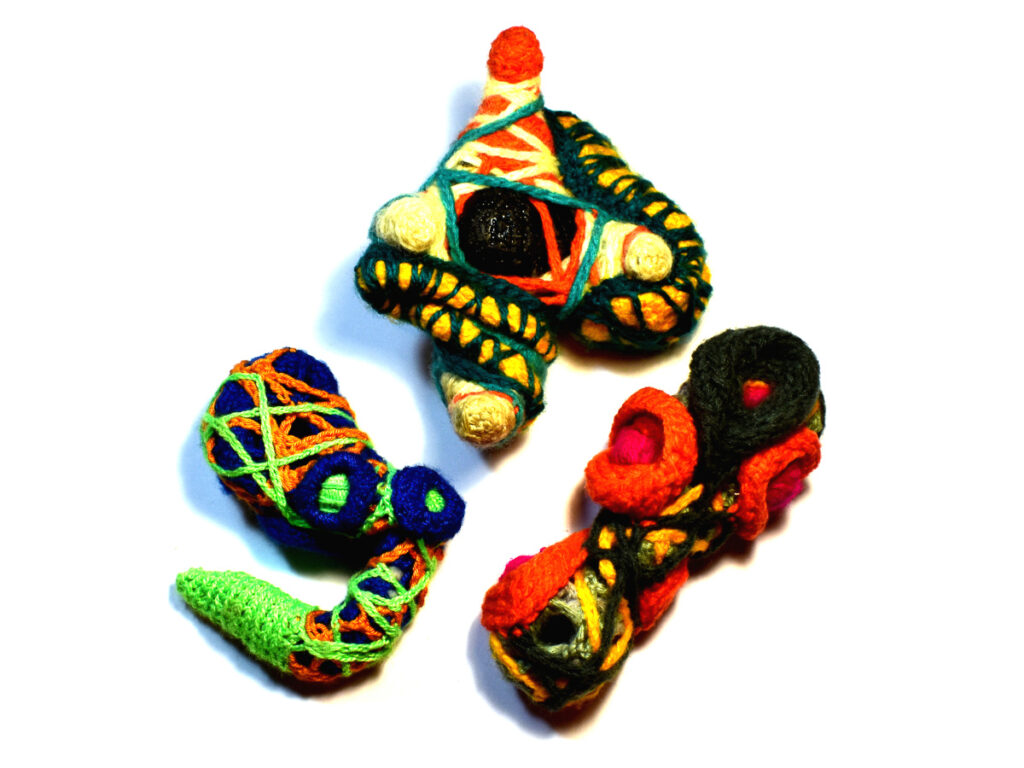 There are so many children that will be born
With a broken wing
And I want them to fly, compañero
And that your revolution
Gives them a red piece of the heavens
So that they might fly

Contemporary jewellery in Latin America is in a moment of important change. There are voices blaming the frivolity and superficiality on its closed working environment, which creates a market of exclusive objects rather than a new form of art.

But we must be careful with stereotypes as there are diverse positions within contemporary jewellery. The one we are interested in—the most attractive from our point of view—is that one which deviates from everything related to the word “jewellery” and moves more towards art, reflection, and a critical view of the object.

In this new series, the Studio Honorato Vicencio is in search of a language, a new point of view to appreciate these portable objects, far from the condition of common jewellery. They share a common attribute of portability but lead in different directions. There won’t be efforts to relate this search with the concept of luxury, which is traditionally attached to the jewellery. What we are constantly looking for is to answer two main questions that challenge the structures of contemporary jewellery:

“Where do we assign the value?” and “What is it sacred to us?

“Cielo Rojo (Red Sky)… for birdies with little broken wings” comes to challenge and provide insight to these questions. However, what they really evoke is the act of leaving hundreds of questions on the table.”

The questions that this message present focus on how these pieces are made; their materiality and context. Woven wool, colors, and forms, along with a search of every-day materials, evoke something that is not ultimately clear. The title of this series provides us with some hints: “Cielo Rojo (Red Sky)… for birdies with broken little wings” is a quote from the manifest “I speak for my difference” by Pedro Lebemel. The mystery that these pieces present to us contain a material tale in dialogue with this text, where it is presented in strong support in that difference in individual subjectivity. Our work draws on metaphors from a diverse nature, where the main focus—and at the same time, the excuse—is weaving as a cultural and social phenomenon. 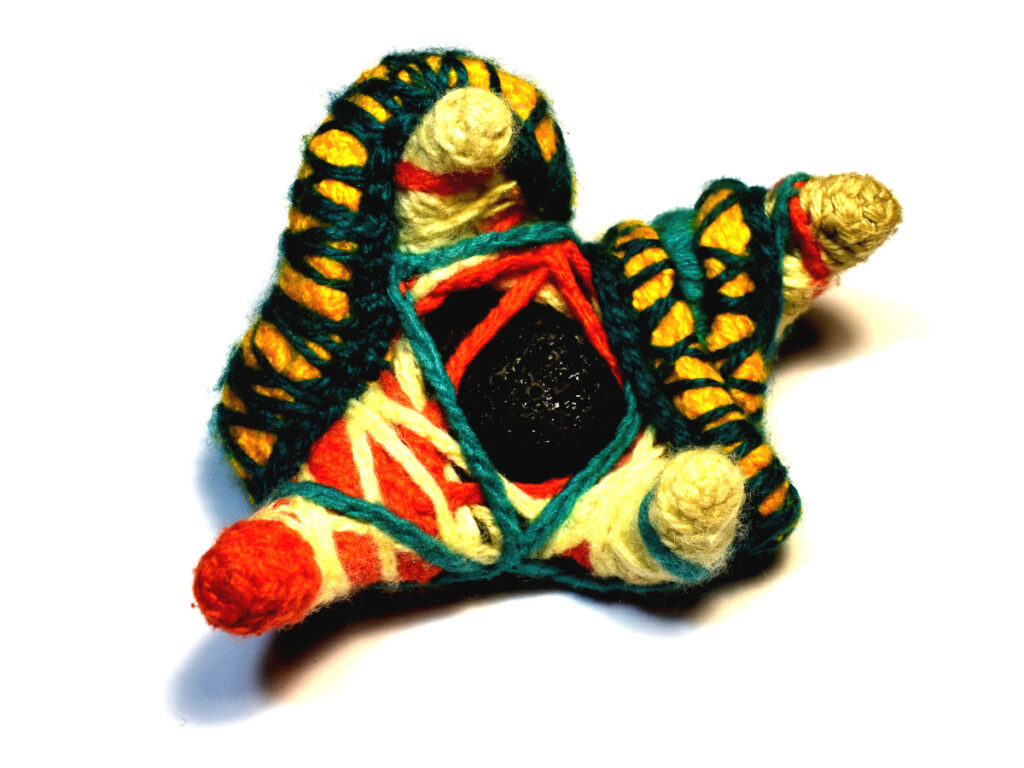 These objects were not made to become exotic artworks. They do not come from far places, nor are made with ancient techniques. We strive for a combination of familiarity on the one hand and rareness on the other. These effects connect directly with the tradition of women that knit but are not part of this tradition. Instead, these objects are here to interpellate it, place it in a different place.

Where do these objects come from? They are not “rare objects” that invite us to explore their place of origin: “I speak for my difference” (Pedro Lebemel). It seems unfair, at this moment, to talk only about his manifesto: all his work talks about this concept of difference, this “no place” which “the abnormal” inhabits and escapes from correctness and social structures, which are nothing more than tools for economic and symbolic standardisation. This series of artworks is found there, in that place for illegitimate objects.

Another idea presented in this series is the concept of “fragility”. We are not talking about the fragility related to the structure of the objects and their breakability (these are not pieces made with traditional materials required to last hundreds of years, as used by traditional jewellery). The fragility relates to their difficulty to “catch the eye”.

We attempt to change the stereotypes expected of a jewel or decorative object. The trained eye meets these objects with contempt. How can rare objects, with soothing warm anthropomorphic shapes, generate contempt? But it can happen here, in a hierarchical, authoritarian, and standardising culture. The difference is as dangerous and subversive as Pedro Lemebel’s work, charged with images that inspire the pieces in this series.

Assuming the difference, we believe, forces you to show vulnerability and exposes your fragility. This exposure has been presented since ancient times as one of the biggest sins of humanity. Subjectivity is something that we must avoid. Placing the concept of difference on the table is not only incorrect but also dangerous; even panic creating. Thes pieces aim precisely at our taboos. It is time to deconstruct them, re-think them, and change the paradigms. 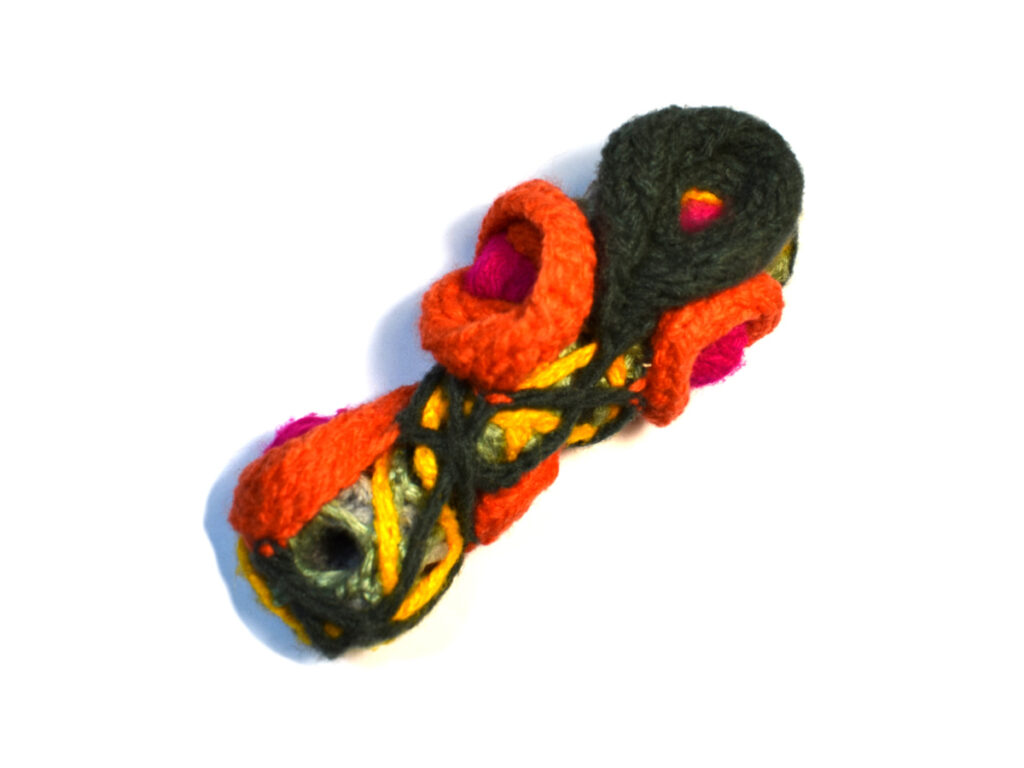 Cielo Rojo (Red Sky) is to us, as the Chilean artist Bernado Oyarzún said, “a little revolution from art”. Like him, we believe that in art there is a way to “invite”, “seduce”, share and approach sensibilities through metaphors. Our work moves not only in the intellectual plane but also in the emotional and social dimension. These pieces appeal to the capacity to reach emotions and access to a more human place; therefore, as the Chilean writer Diamela Eltit said: “each art piece chooses its interlocutor, its public”.

Contemporary jewellery with meaning has become an urgency. The world is dynamic, and uncertainty and fear have uncovered the best and the worst of people. Art in this sense has a task that can assume or ignore. Contemporary jewellery is at a crossroad in which its acting parts must react, to take decisions, in order to exit the sphere of frivolity. In our case, this last work comes to show exactly this, beyond manifestos, there are the gestures, the artworks. These pieces are the best argument, the best cover letter. The artworks of Cielo Rojo (Red Sky) are the answer to what is happening in contemporary jewellery as in our manner to build a society, a world we dream for tomorrow.

The world we know today is not a world where we are used to seeing fragility. Instead of seeing it, the world condemns it, judges it, and labels it. Not fully happy with this, if it is possible to take advantage of that disrobed fragility at any moment with no hesitation. For this, it becomes mundane to see so many birds with broken little wings. This project is a way to tell them: we see you, we know you exist, we know you are there.

If we could imagine a better place, we would weave for them a warm life. Contrary to what society teaches us, the desire for protection towards fragility does not arise only from the uterus. It comes from the guts, and it is something we can all do. If we could imagine a better place, the broken wings would not be a sin of the hurt birds but rather an invitation to respond to someone else’s fragility, to give room to a red sky where we can all fly in peace. 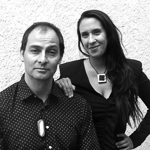 Caco Honorato and Mariela Vicencio are a couple that put together the Honorato Vicencio Studio in Santiago, Chile. Caco and Mariela dedicate their work to object poetry. They are guides of the creative process, co-curators, cultural popularisers, interdisciplinary project managers, publishing editors, and contemporary jewellers of the Latin American scene. Related to their poetic production, they focus their work towards the reflection around objects. As contemporary jewellers, they take this discipline to its critical limit regarding origin and meaning. For the Honorato Vicencio Studio, the staging is not constructed only by objects but considering all the materials generated during the process in a broad sense. For this reason, they have explored diverse areas that go beyond the production of objects as a manner of broadening the field of reflection, the development of critical thinking, and artistic production.

Māreikura: Exploring the goddess in Māori women
Guildhouse, The Ghan and gumnut earrings
Eucalypt meets indigo in Kanazawa - with gold leaf
Sky's the limit: The Cultural Textiles Rug Project
New Zulu beads to be worn with pride
Double Happiness
The art of turban tying
Following nature’s rhythm: a season on the field as a Linen Steward