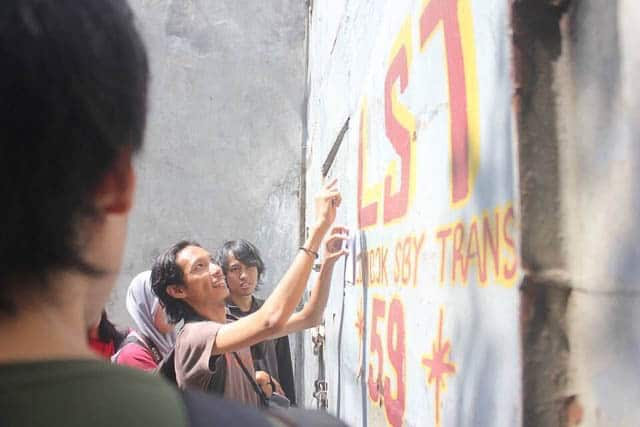 The first DIY Surabaya, a design walking tour exploring the typography of the old Chinatown in Surabaya. 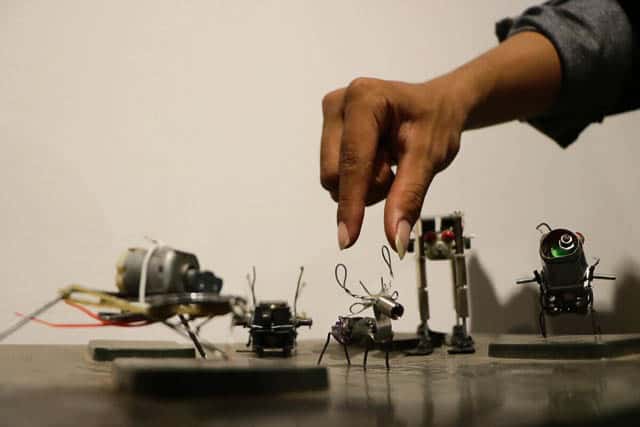 WAFT-LAB: a Hebocon robot contest as part of DIY Surabaya 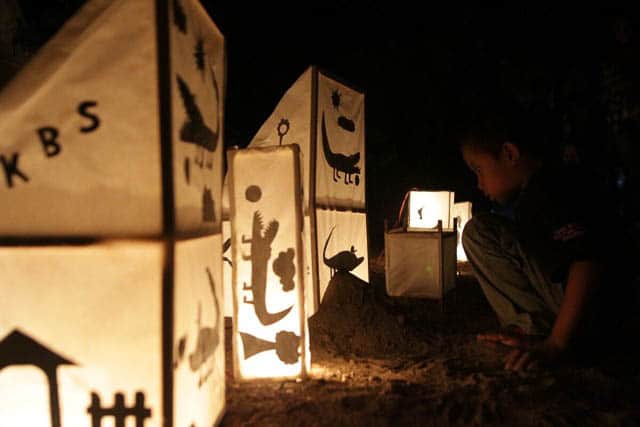 The closing performance of the 5th DIY Surabaya held at Surabaya zoo. 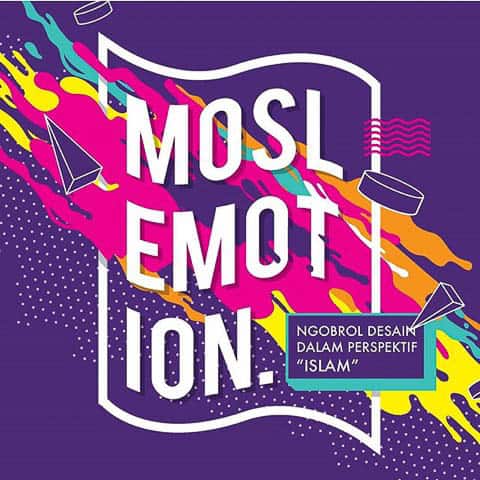 The poster of series of visual design events organize by MOVE (Moslem Visual Education) in Surabaya. 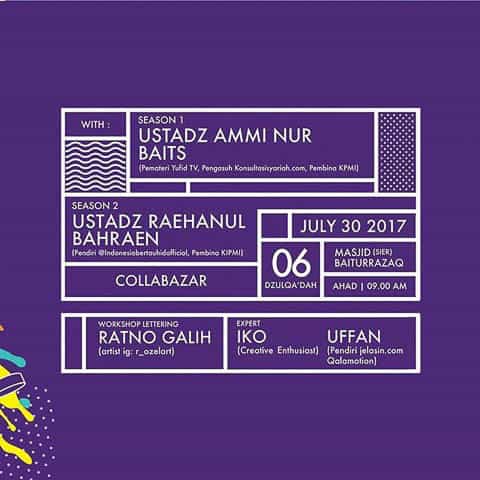 The poster of series of visual design events organize by MOVE (Moslem Visual Education) in Surabaya.

Surabaya, the second largest city in Indonesia, will be transformed this December 2017 by the Surabaya Design Summit, previously named Design It Yourself Surabaya (DIYSUB). This event is one of the programs of the design space C2O library & the design collective collabtive. Alexandra Crosby interviews Summit director Andriew Budiman.

Tell me about the original name “Design It Yourself Surabaya” (DIYSUB) and why DIY is important as a cultural reference and practice?

At first it just sounded like a fun abbreviation and pun to us, crossing design with punk’s DIY subcultures. But we’re not trying to encourage individualistic or exclusionary works by using the term DIY, or to hark back to distant subcultures. Rather, we are playing with the more recent terms like DIWO (Do it With Others). By using the phrase Design It Yourself, we want to promote a more inclusive definition of design. That design as a way of understanding conditions and complexities first, then developing solution based upon those understandings.

Back to DIY as a term, as an English language cultural reference, we decided it could be foreign and alienating for the Surabaya context. In fact, for the majority of Indonesians, DIY is an abbreviation for Daerah Istimewa Yogyakarta (a special region in Central Java, famous for arts and culture). So after five consecutive years, we decided to take one year off to reflect. We made some significant decisions, to reset DIYSUB as a biannual event, and to rename it Surabaya Design Summit. It’s maybe a more boring name, but in introducing design to broader communities, we think it’s more self-explanatory.

This is critical, as the mission of the event is to expand the definition of design, but also its stakeholders and beneficiaries. We are interested in the way design is practised, discussed, comprehended, developed, and studied. So, we need to redraw the map, reform the rules of the game and rethink social constructs, to create an updated, more diverse and larger design ecosystem.

As a relatively new, imported word, what does ‘desain’, (design) mean in Indonesia?

Things get trickier in Indonesia (and probably other non-English speaking countries), because modern design disciplines taught in our schools and universities are imported from Europe and America. So there is an immense amount of homework for us to do for the adaptation, reinterpretation, and appropriation of these supposedly universal design methods and concepts to the local context. But there is a silver lining: as the biggest maritime and archipelagic country (with more than 13,000 island, 300 distinct native ethnic groups, 742 different languages and dialects), these cultural tapestries provide opportunities to form new and distinct design materials, articulations, vocabularies, languages, cultures, and ecosystems previously unexplored in international design discourse.

As an Indonesian and Javanese speaker, I see a global phenomenon where ironically the meaning of some English words is shrinking, including the word “design”. For instance, the phrases User Experience, Interaction Design, Product Design, which used to cover broader areas and senses, now tend to be widely used to address only digital, app-related environments. We even see this on diagrams about phases of the design process, for example in urban planning, where the drawing stages are labelled as “designing stages”.

Going back a couple of decades, when foreign words were relatively slow to be imported to Indonesian language, we took our time to translate Design into rancang. For example, ADGI (Asosiasi Desainer Grafis Indonesia), was formerly named IPGI (Ikatan Perancang Grafis Indonesia) when it was initially formed in 1980. Now the pace of language exchange is much faster, which complicates how to convert foreign words into the conversation. For example, some people today are likely more familiar with the English loanwords like “download” or donlod rather than unduh, destinasi (destination) rather than tujuan, eksibisi (exhibition) rather than pameran. Try resetting your Facebook account to Indonesian and have a look at how those “foreign” words are translated. Such tensions leave us with of plenty food for thought about what local and global can share, what is universal, and how we can learn together about values, cultures, creation, and identity-making.

How is design taught in Indonesia?

Formal design education in Indonesia has pretty much kept to the three distinct areas of graphic, interior, and product design. Now, those are beginning to be challenged by alternative education outlets, from local skill sharing initiatives to youtube channels and online course. Despite the vast adoption of digital social networks, the majority of Indonesians still rely on meeting in person to coordinate and learn. So communities that do offline peer to peer learning are a big deal here. For instance, in Surabaya, Islamic based designer communities might organise a gathering and conduct workshops on applying design principles and best practices which are aligned with their religious views. And while the buzz around Indonesian digital start ups is in part hysteria, it is enabling more people from diverse background to get involved in design ecosystems.

How would you like design to be understood in Indonesia?

As the digital revolution unfolds, the definition of design should be expanded, beyond just crafting processes, image production, and form making. Those processes are easily replaced by artificial intelligent capabilities. In today’s environment, where we’re surrounded with complex and constant connection, I’d like to see design understood as sense making, as a way to comprehend how systems work, to gel different fragments, as a method and/or language that fosters collaboration, a set of cohesive elements that can synthesise interdisciplinary efforts. So design means to do ethnographic observation, drawing, mapping, prototyping, user testing, conducting research, articulating process, and all the other practices that are part of the design process.

The Surabaya Design Summit is this December. Alexandra Crosby will be a designer in residence. See video from previous events here. 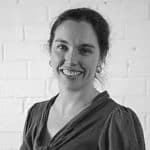 Alexandra Crosby is a designer, researcher, and writer who focuses on southeast Asia, particularly Indonesia. She directs the Interdisciplinary program in the School of Design at UTS. In her current research she is looking at emerging design practices in Indonesia and working in the transdisciplinary research studio Mapping Edges. She is also on the board of Inside Indonesia.

Jember Batik: The dragon rises
Made with lava in Chile
We are all Merantau: Macassan journeys
Minoyaki ceramics and the mystery of kairagi
Academic and weaver join head and hand in Bandung
Letting go design in Dharavi
Indonesia’s generation Z takes up shibori
Assegai: A spear of light across the Indian Ocean