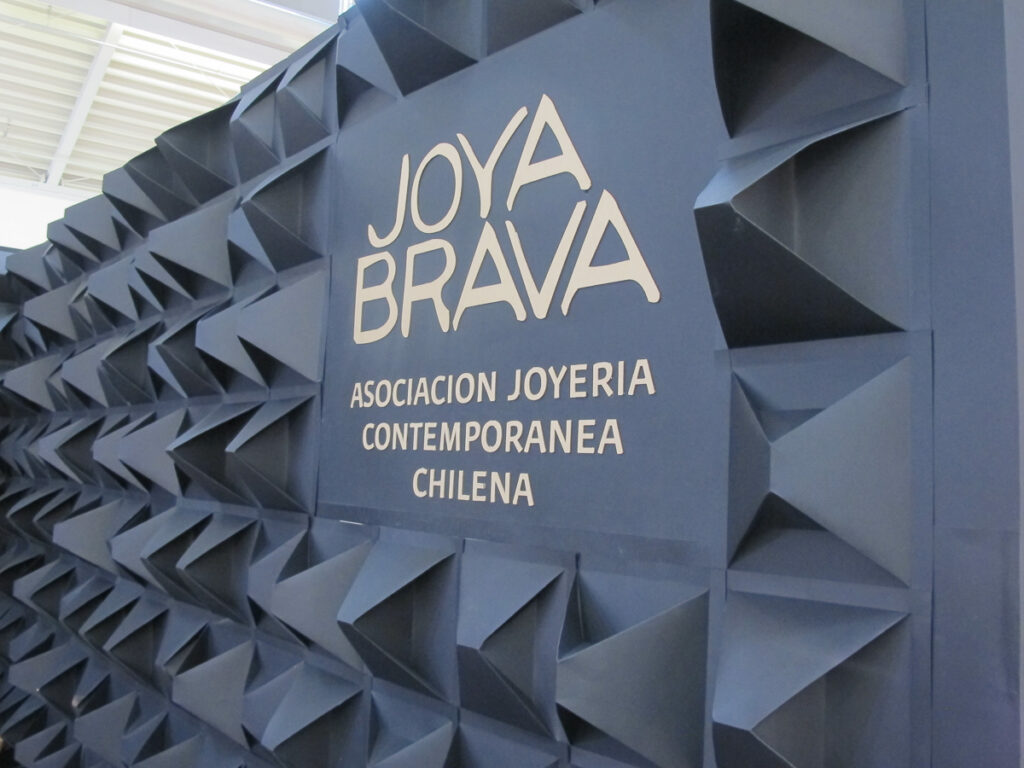 Liliana Ojeda writes about the creation of an art guild in Chile that over ten years has given meaning to the art form of “contemporary jewellery.” 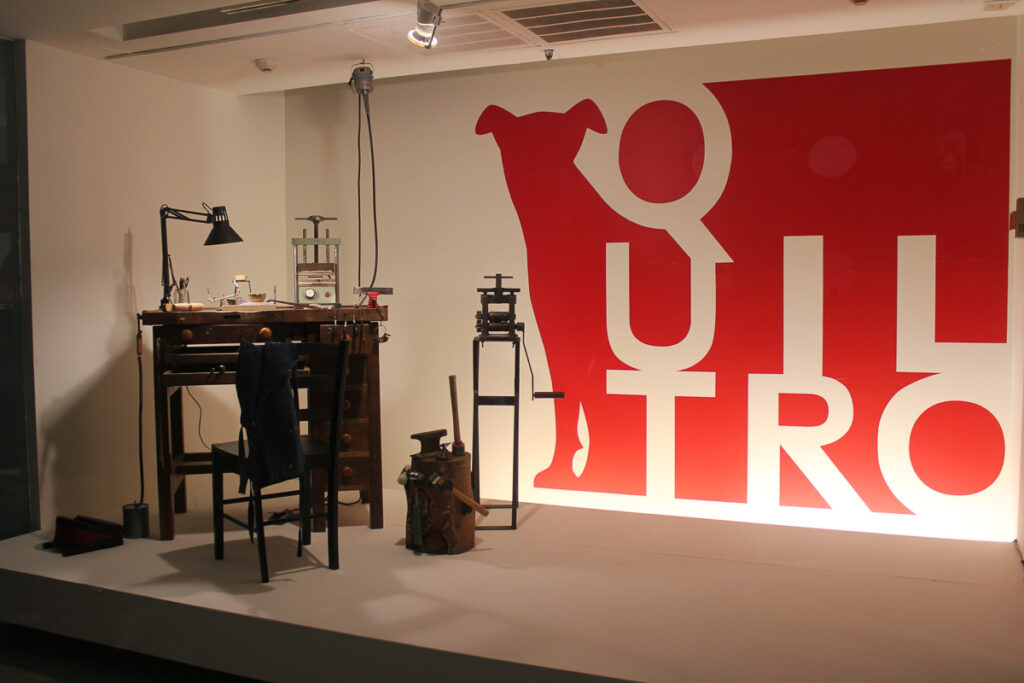 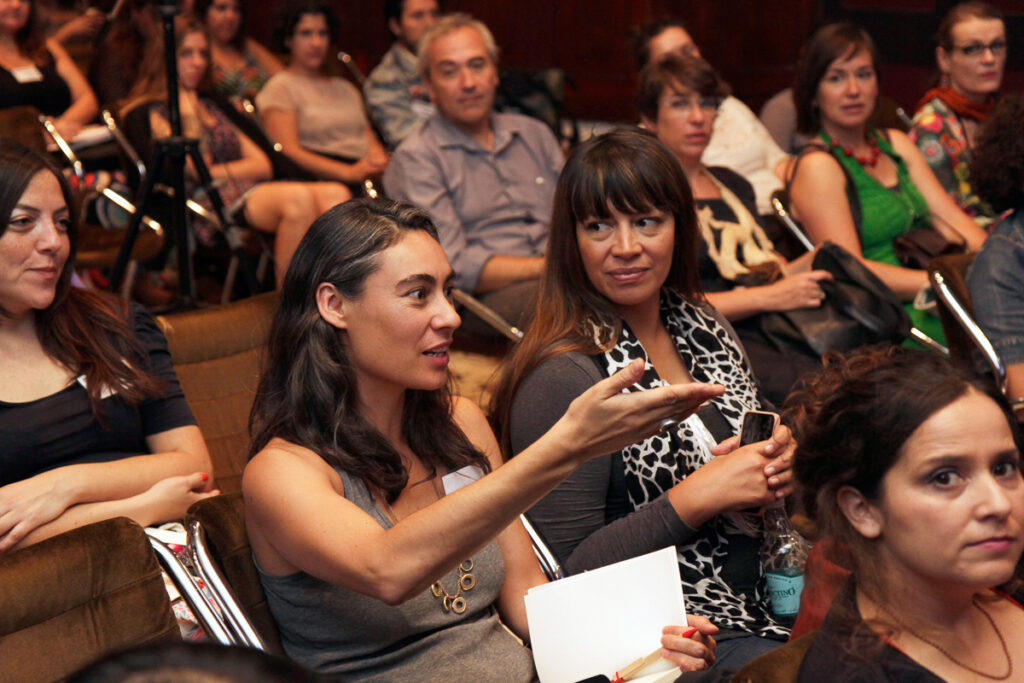 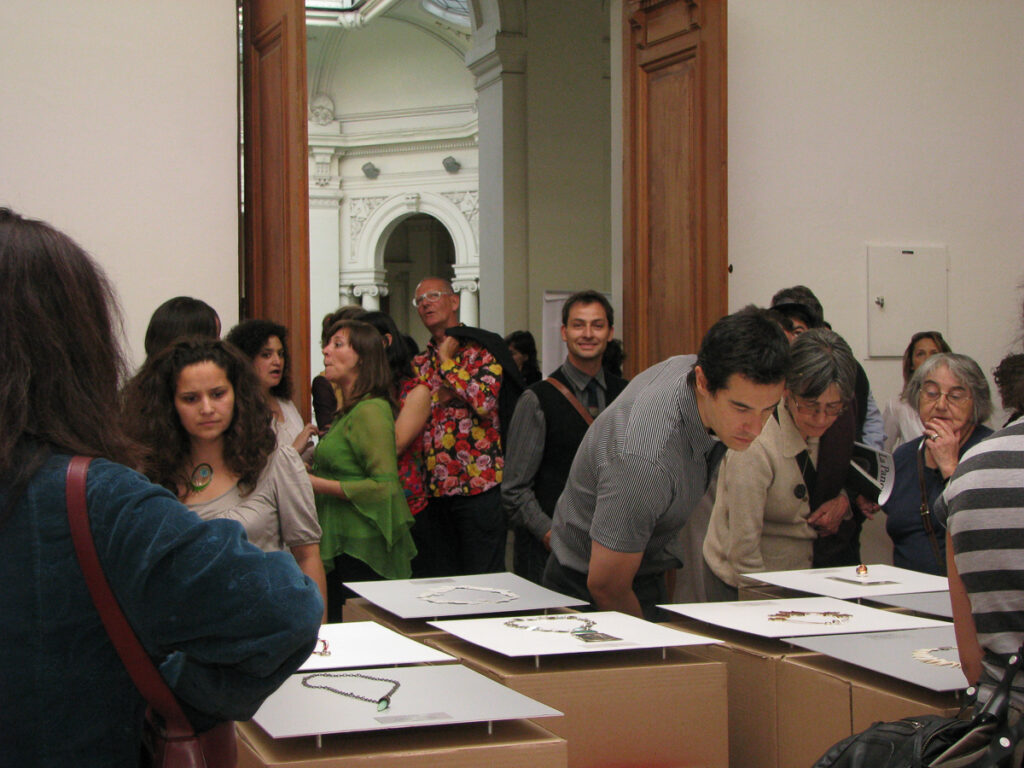 I love the metaphor of the “butterfly effect” because it explains the birth of our association. It took travelling 6,600 kilometres from Chile to attend the Gray Area Symposium in Mexico, to visualise for the first time that we were many. In that moment we realized we wanted to do so much more than just work alone, producing and selling jewellery. As soon as we returned home from that enriching experience, we set to work on our project of founding a Chilean trade association. At that time there were only four of us who pushed the idea, and we knew each other but little, but that didn’t matter because we had found a deep cause to become friends.

At first, an association seemed like a distant dream because we would need 25 local jewellers to sign up and make a legal commitment for the guild to be founded. It took about six months to plan, organize, and make our project a reality.

Finally, on October 21, 2010, a group of 33 jewellers met to sign the statutes and celebrate the founding of Joya Brava (which translates to Brave Jewel), the first Chilean contemporary jewellery trade association.

I will never forget that at that time Chile was in the international headlines because 33 miners were trapped inside the earth at a depth of 720 meters. After 69 days of despair, they were all rescued alive, just a week before Joya Brava was born. Strange coincidence, I thought. We were also a group of 33 who seemed to emerge from the earth full of hope, collaborating for the founding of the contemporary jewellery guild.

Who are we and what we’ve done 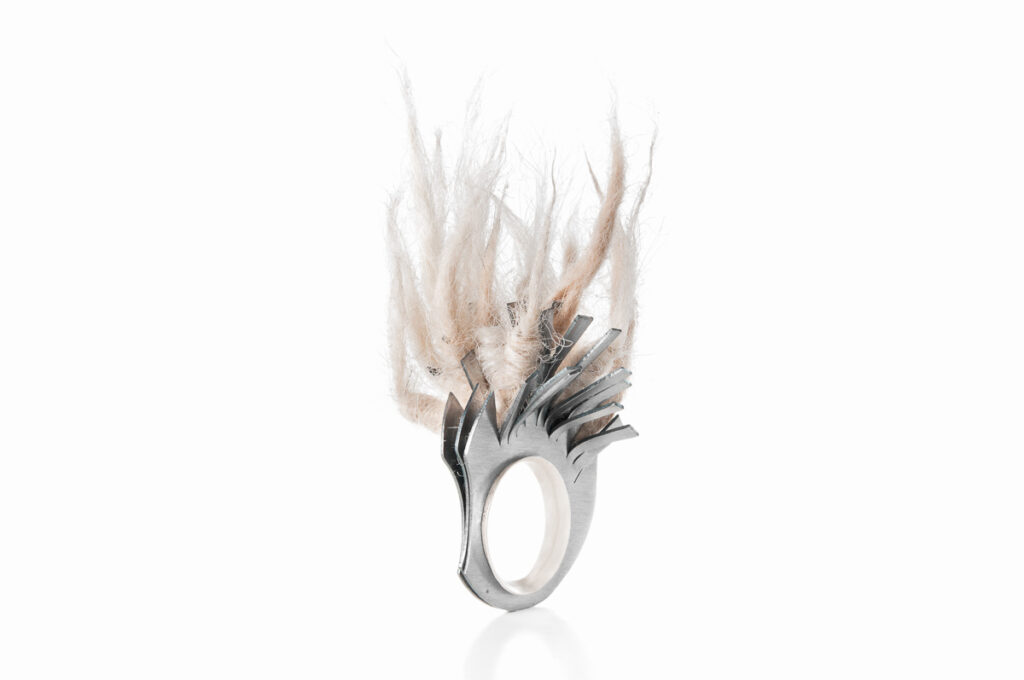 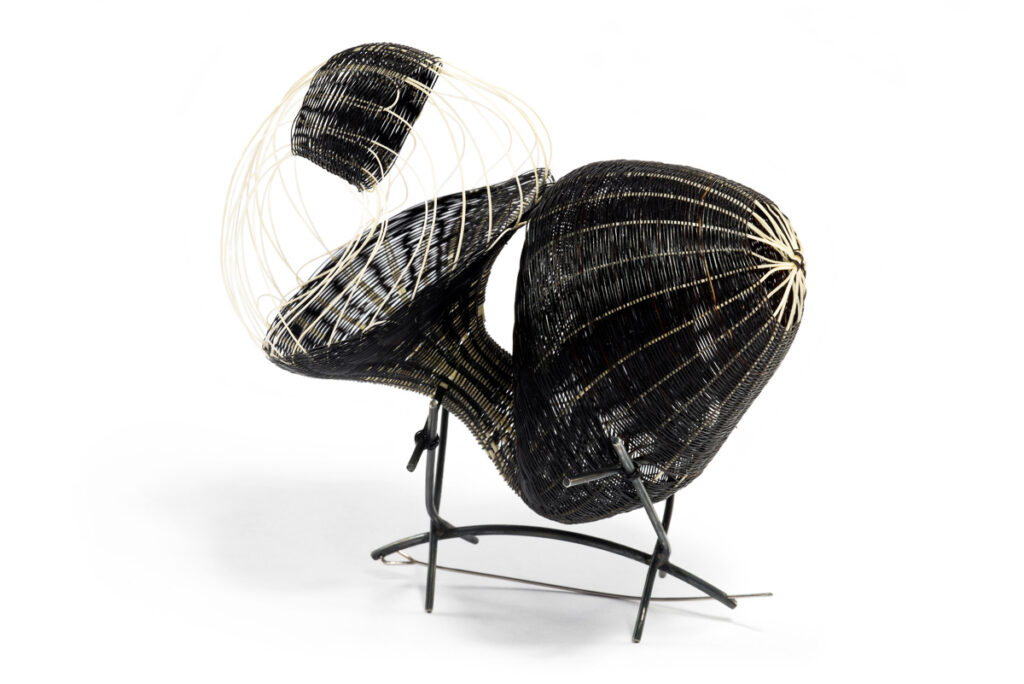 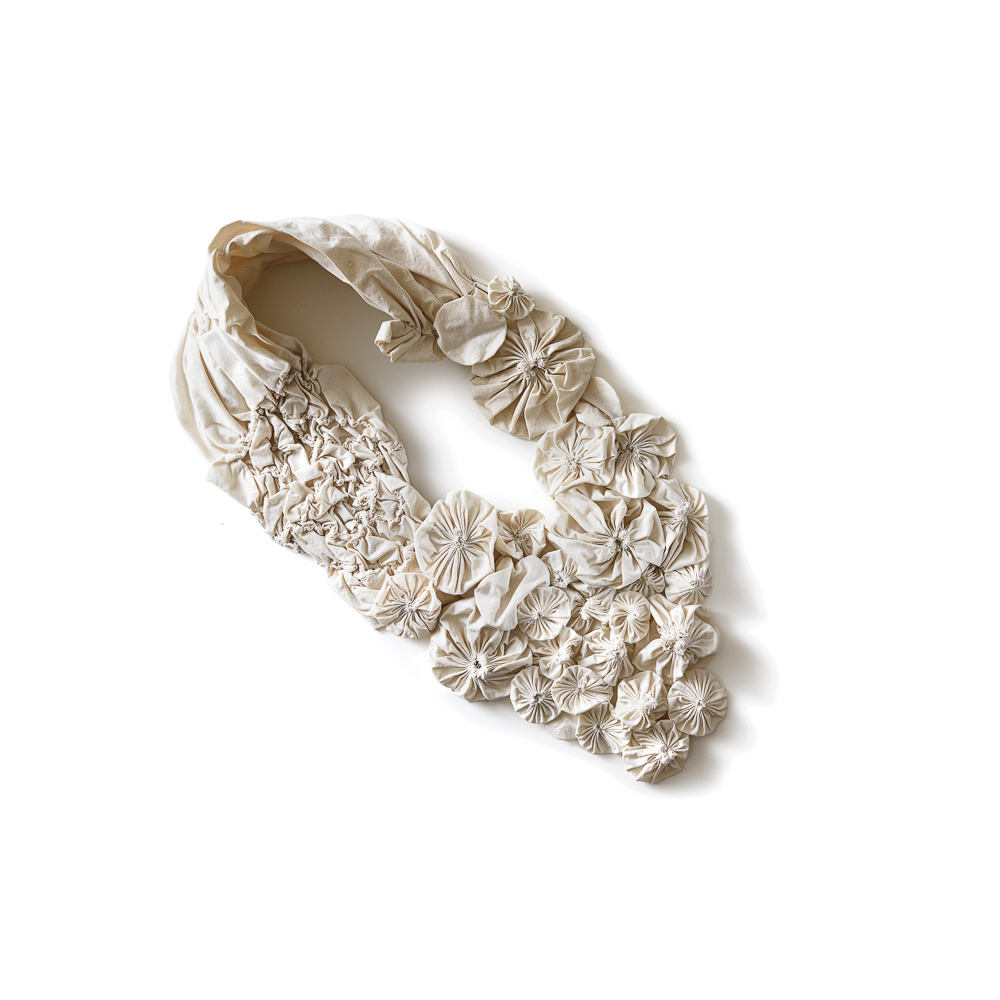 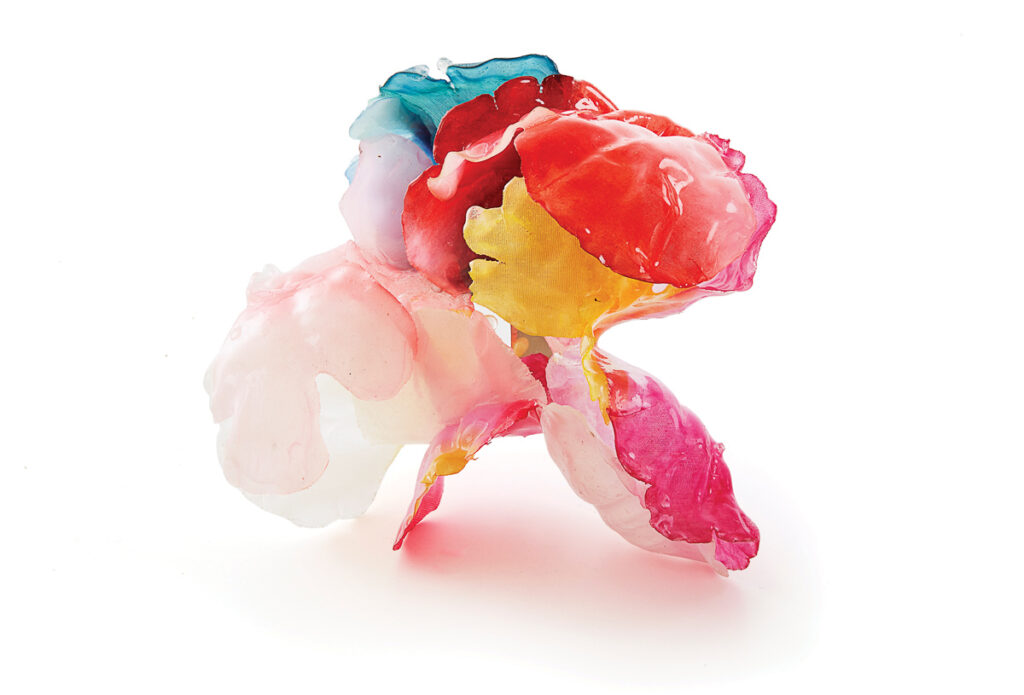 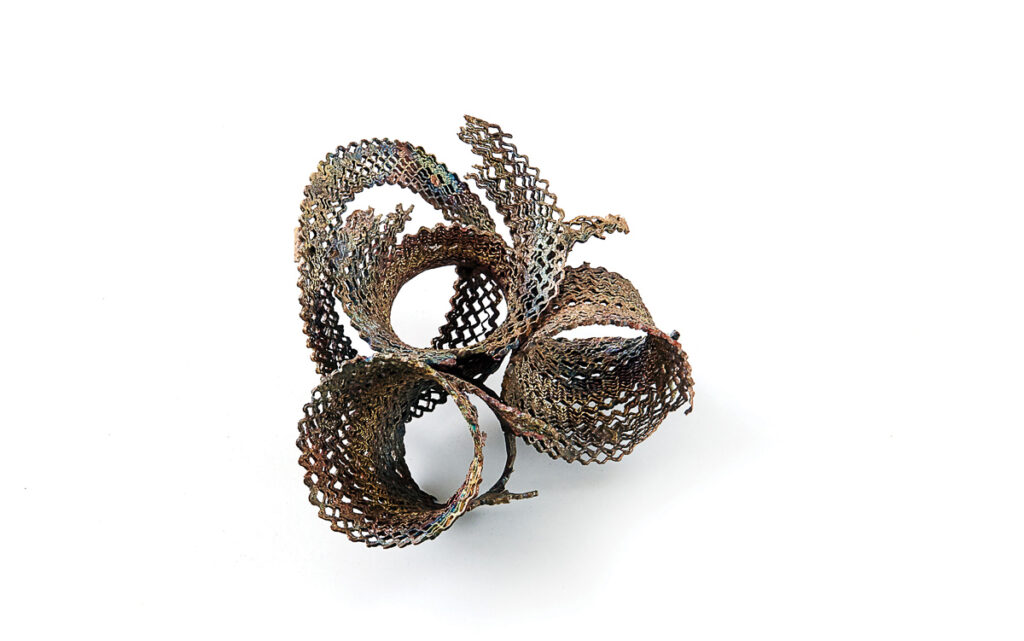 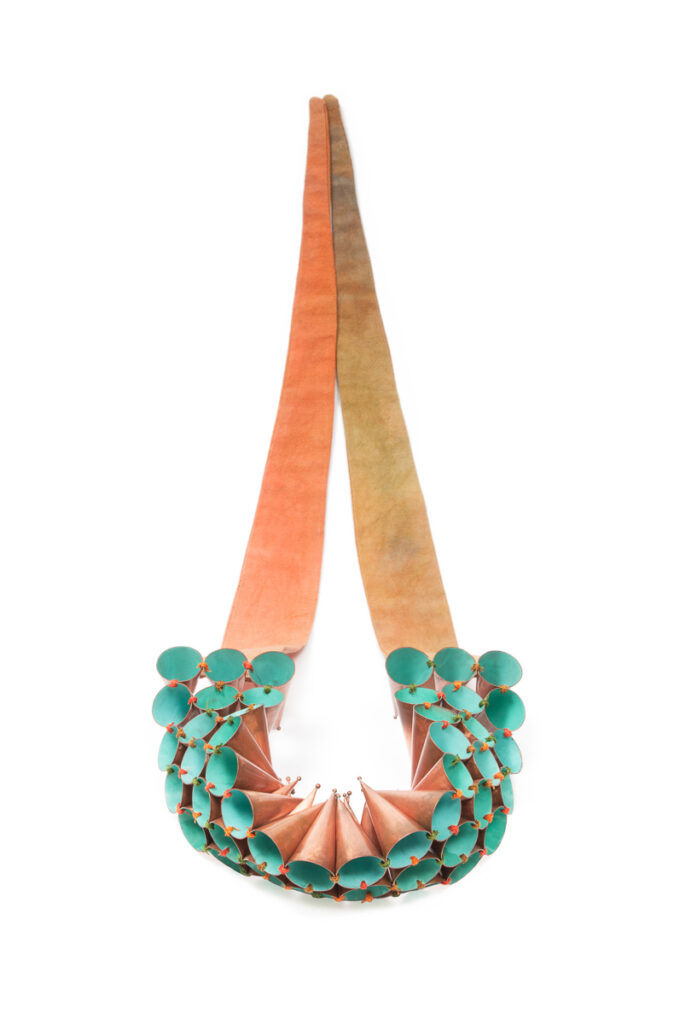 In the past 10 years, around 60 jewellers have been part of Joya Brava. We have members just beginning their careers and others who are established artists with important awards and recognitions. We’re all jewellery professionals, many with formal studies as diverse as art, design, architecture, sociology, and business. At first, the male presence in the group reached 10%, but today Joya Brava has only female members.

But the group is heterogeneous. We have at least three different generations within the group, some members live in cities far away from the capital, some work in the jewellery field only, others have a parallel job to support their art practice. And some don’t identify with a binary definition of gender.

What happened after the founding of Joya Brava felt like riding a roller coaster, including exhibitions, fairs, travelling, tutorials, workshops and seminars. For several years we couldn’t stop—one project led to another, and so on… Curiously, we never felt afraid to embark on any task, no matter how titanic.

In 2011, came our first collective exhibition in Chile, and we called it “Quiltro: De Origen Indefinido” (Quiltro: Of Undefined Origin). Quiltro is the word for stray mutts in our country. We managed to set up this large exhibition at the Centro Cultural Palacio de La Moneda (La Moneda Cultural Center); we believe it was the first contemporary jewellery exhibition in Chile. Kevin Murray, from Australia, wrote the foreword to our first catalogue. He defined Joya Brava as “a cohesive group that is established from scratch, to build a kingdom ruled by stray dogs, who build their own castle.” We were so excited to show the Chilean public this new art form that we made such beginner mistakes as not giving the director of the centre a chance to speak on the opening day!

This first exhibition reflected how we felt at that time: hybrids without race, with no place to live—in other words, quiltro jewellers. This first step was like reaching the moon because in Chile there was no platform for our proposals. The label of “jewellery” confused the audience, as the understanding of the term was completely traditional. We were jewellers with the attitudes of artists, and that convinced neither jewellery lovers nor art followers. Did the people who visited the exhibition understand what we were doing?

Later, with our overflowing courage, we continued to colonise formal art spaces, such as the Museo de Bellas Artes (Museum of Fine Arts), where we presented our second collective exhibition, called “Cromática” (Chromatic), in which every artist was assigned a colour to include within a piece. It resulted in a very vibrant display of jewels.

The next major exhibition that Joya Brava organized was “Persistencia Barroca” (Baroque Persistence), and for the first time, we worked with the historian Rolando Baez, who imbued us with knowledge about the Latin American baroque. From that aesthetic matrix of excesses, the works emerged. Topics such as our mestizo identity, the Catholic religion imposed on the original inhabitants of our land, and the translation of these influences in the objects and paintings exhibited in the religious museum of La Merced all inspired us to create a series of works freighted with a great emotional load.

But every time we put on a group exhibition, we were left with the same question: Did anyone understand what we were doing? Were we able to explain it ourselves? A cultural organization suggested we give guided tours of the exhibition. This exercise of explaining the works to the visitor helped us to deeply understand our discipline.

After these local experiences, we wrote our first guild manifesto, and we decided to be more strict when accepting new members because we wanted to have a more homogeneous group, people aligned with a common discourse. With this new approach, we earned the reputation of being a non-inclusive guild.

Although we tried to spread our work locally, our main focus was Europe, where the concept of contemporary jewellery had been coined, where we believed there was a receptive audience. This was where we wanted to present ourselves; we wanted to swim in the same waters as those we admired. In 2013 we launched a stand at the Inhorgenta Munich international jewellery fair. We had the support of the Chilean government promotion agency for this project. Ricardo Domingo from Spain worked with us making a selection of jewellers. We travelled to Germany and showed the best of Chilean jewellery. For the first time, Chile was on the international jewellery map.

For the next four exhibitions, we resorted to a very demanding working method, which consisted of a lengthy workshop where a concept proposed by a tutor was developed, pieces were selected, and a subsequent group exhibition was launched in Europe. Soon we were participating in Autor (Bucharest, Romania), Joya (Barcelona, Spain), Munich Jewellery Week (Germany), and Legnica Silver Festival (Poland).

Chile is not an industrialised country. Our artworks are characterised by the many hours of manual labour that go into them, and few technological resources. It’s in our nature to promote the crafts of our region, and we have a delightful diversity of materials and techniques. Some members of Joya Brava have researched traditional crafts, reinventing them in their work by learning the techniques themselves, becoming masters of the craft, or commissioning expert craftsmen to make some components of a work. For example, Rita Soto explores micro basketry to make whimsical brooches with bulging forms and colourful tendrils, pushing a traditional technique to unexpected limits. And Valeria Martínez makes filigree artwork with copper, defying the possibilities of the fine wire and achieving amazing volume in her pieces.

In other cases, moved by admiration for ornamental practices such as weaving, flower arrangements, and interior decoration, other artists have incorporated the materials and methods used in popular contexts into their work. Vania Ruiz, for example, is inspired by childhood memories of her grandmother’s interior decoration with plastic flowers and fabric holsters. In her “Domestic Nature” series, she combines textile and resin to build a garden of exuberant creatures.

Loreto Fernandez rescued old bedsheets from her grandparents’ house to make her “Memorabilia” series, hand-sewn white pieces that represent what she calls “my life before me.”

What have we learned? 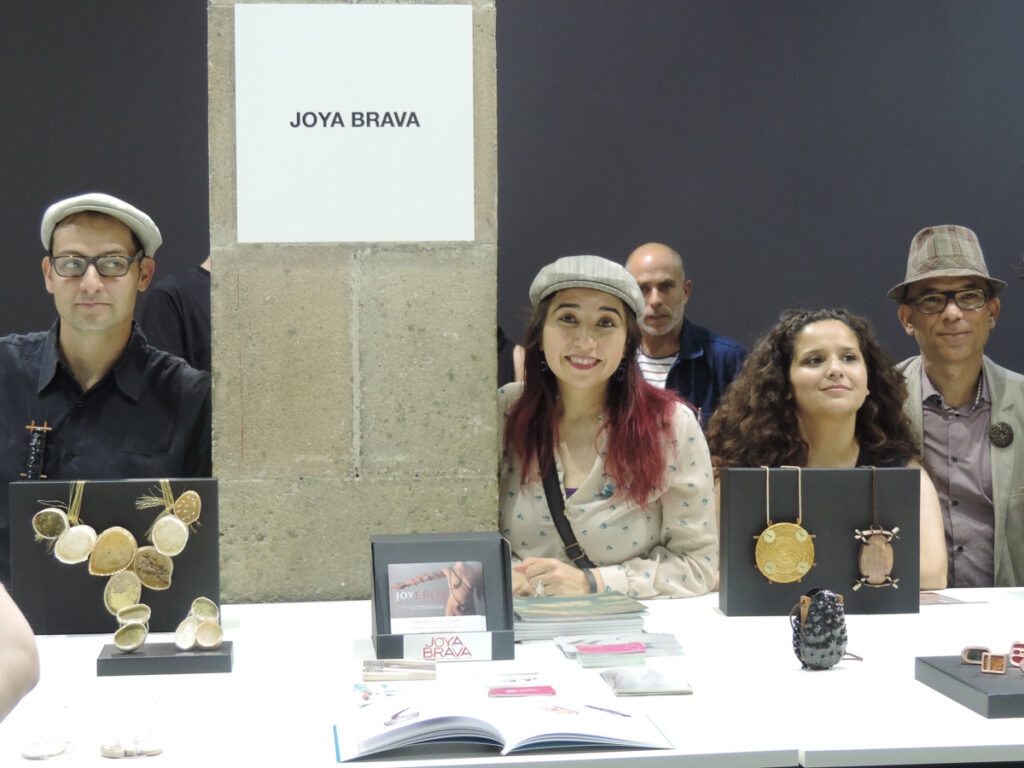 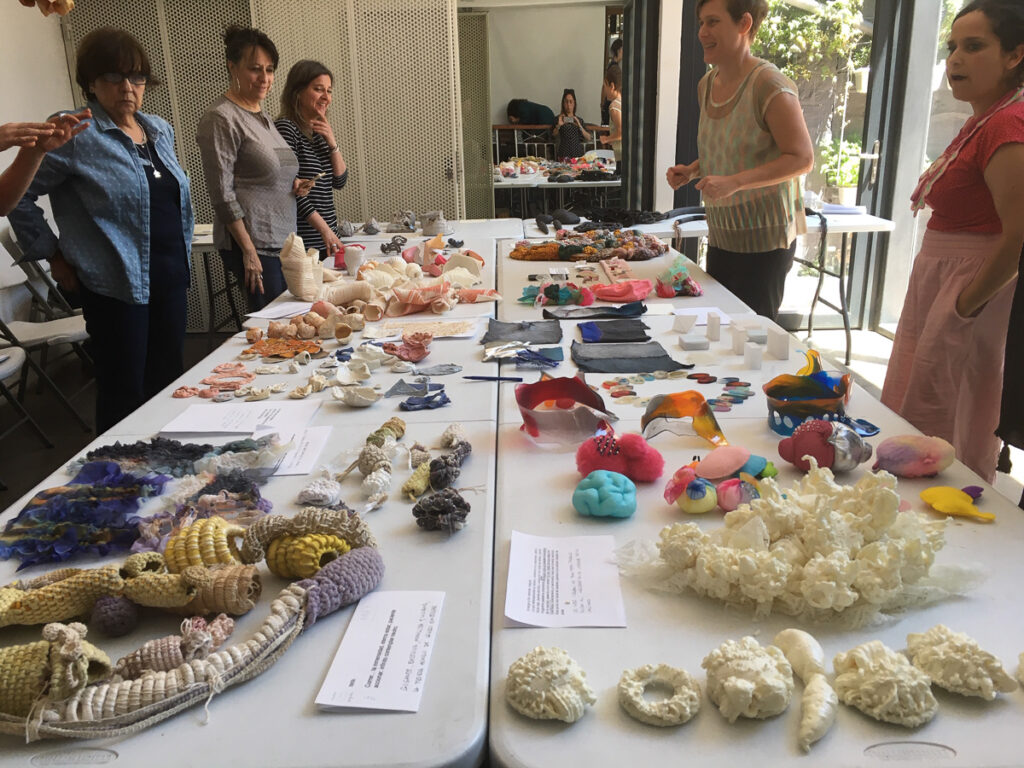 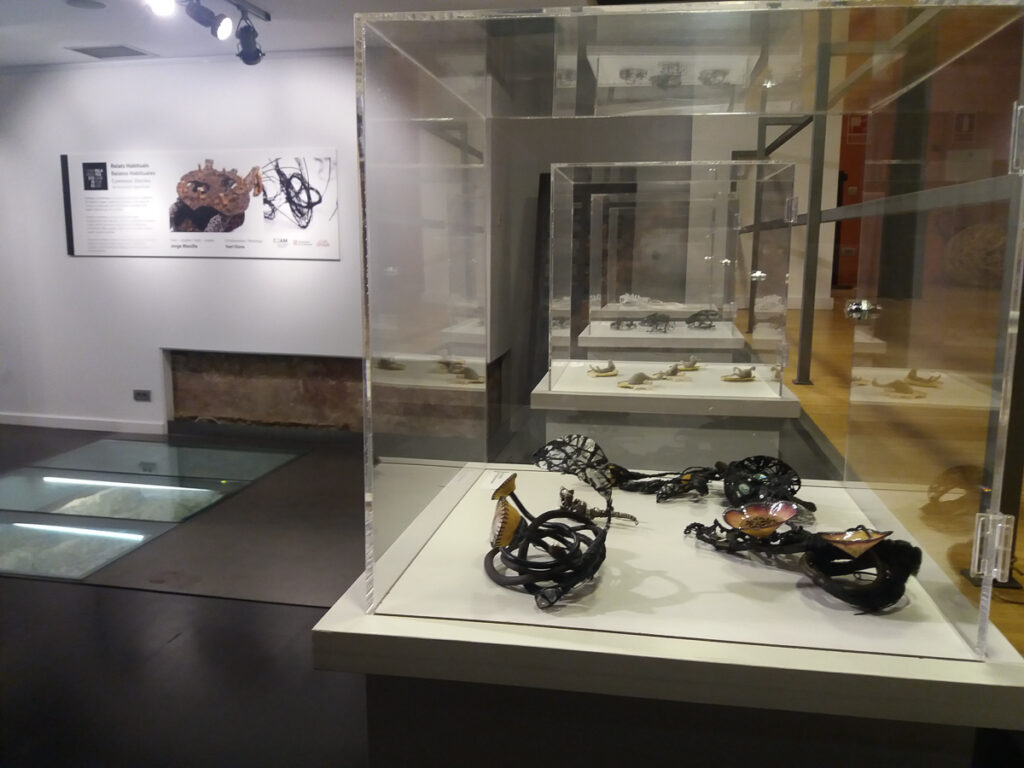 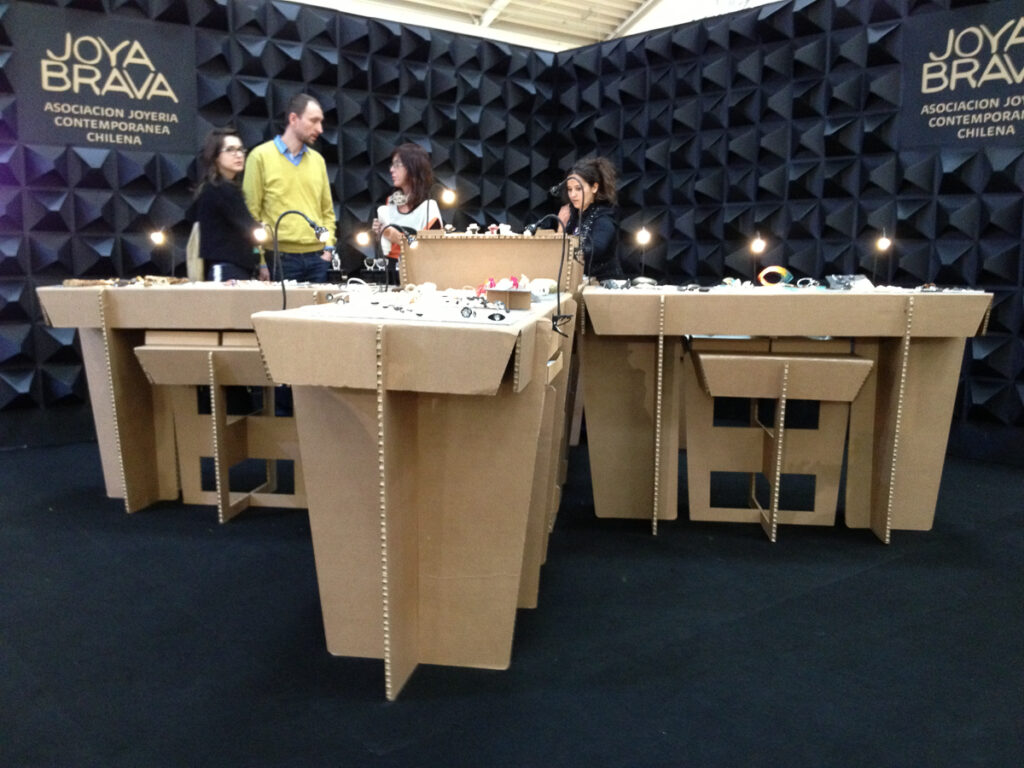 With this association, we have allowed ourselves to be artists, moving from the commercial product to the work of art. The works developed in each project are increasingly elaborate, strong, and deep with meaning. It’s very moving to see the evolution over time of artists who seem to flourish with each project. In 10 years we’ve organized seven relevant group exhibitions with the mentorship of experienced experts such as Rolando Baez, from Chile; Jorge Manilla, from Mexico/Belgium; and Jorge Castañón and Francisca Kweitel, from Argentina. In these experiences, we’ve learned how to give shape and substance to our stories, pains, and hopes.

With time, we’ve developed mature contemporary works of new value and commitment. We realise the importance of delivering quality in what we want to communicate, and that makes us very responsible for what we do. We discovered that we can work with what we have around us, in our daily life. This gesture of considering everyday themes and materials gives our works a sense of belonging because, through our work, we’re showing our personal and cultural identities. For, in the end, we not only create jewellery; we also forge ties, trust, a scene, identity. We feel part of the building of Latin American jewellery today, bringing the presence of Chile to Europe. We are aware of being part of a story that is being written now, and there is still a lot to tell.

A time of reflection is coming. We realize that we must improve on sharing our knowledge. These times of pandemic have helped us to open ourselves through social networks to communicate and deliver content to our audience. Lately, we’ve been interacting with Latin American organisations to strengthen ties and forge our Latin American identity.

We’re so proud to celebrate our first decade, and although dissolving is always a possibility, we look to the future with the idea not of expiring but of inspiring. We believe that it’s time to reinvent ourselves and prepare to welcome new generations. We dream the next decade with more desire to talk, engage with other disciplines, and reach new audiences. 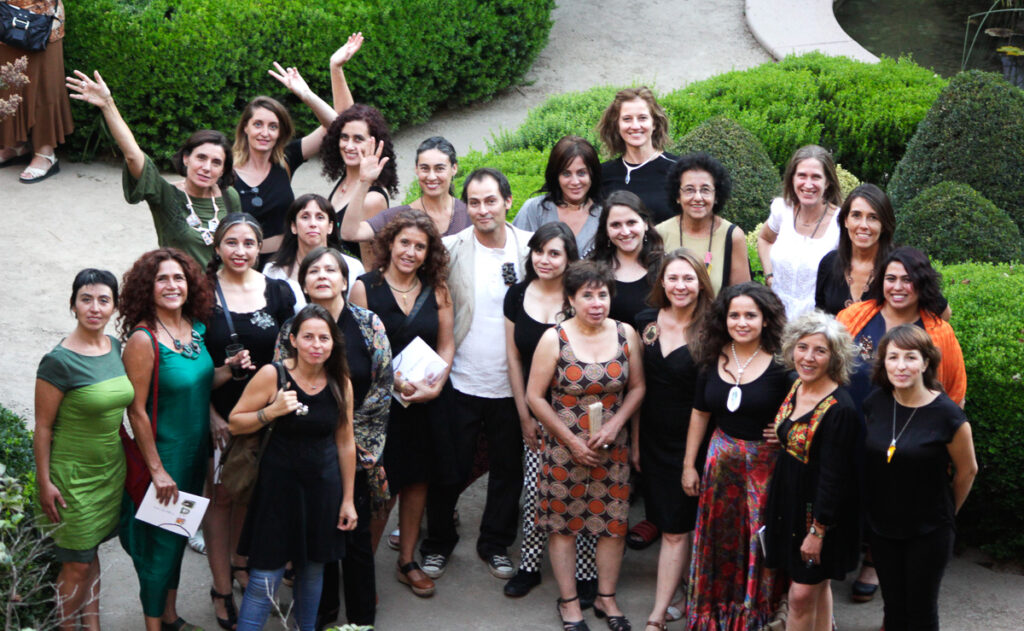 Joya Brava is a trade association founded in 2010, with the goal of joining forces to give visibility to Chilean jewellery and add Chilean voices to the cultural scene both nationally and internationally. Its members want to provide space to develop their proposals and have experiences of collective creation, to organise quality group exhibitions. At the same time, they wish to educate the public in understanding this discipline. Because Joya Brava is a trade association, it receives financial support from various government agencies to carry out its projects, allowing it to fulfil its dream of positioning Chilean artists in the international contemporary jewellery scene. In a decade’s time, Joya Brava has organized seven relevant group exhibitions with the mentorship of experienced experts. Ten years after the association’s founding, the term “contemporary jewellery” is no longer unknown in Chile.  See www.joyabrava.cl

Gate 8
Made with lava in Chile
The currency basket: Investing in a shared world
Fragments of King
Isifociya: The revival of Zulu adornment that protects and beautifies
Reborn in the Wenumapu: The meaning of the eclipse in Mapuche culture
Especies Acuñadas: Divesting colonial currency
The Earth and its elements: Wood, fire, earth metal and water