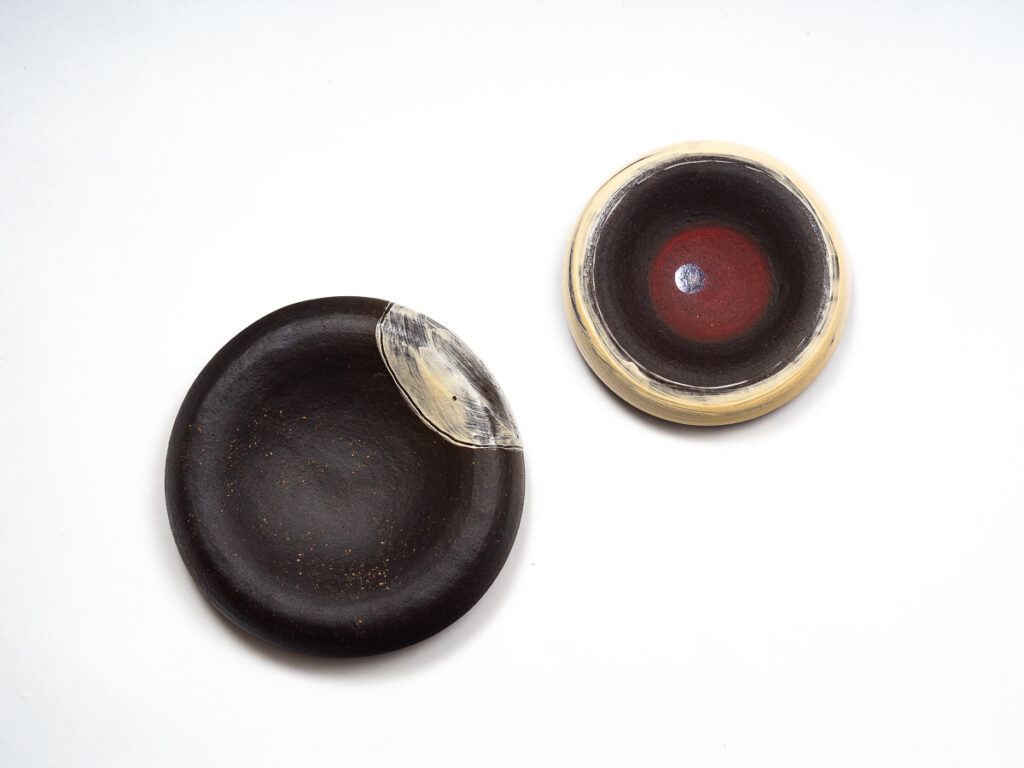 Jane Sawyer witnesses a rare astronomical event, which prompts her to consider the planetary nature of the clay in her hands.

27 July 2018: A Blood Moon and the longest total lunar eclipse in a century lasting 103 minutes.

Our planet, in line with and between our sun and a full moon, casts a shadow on the moon which glows red by the touch of the sun. And what a red! A burnished-iron-oxide sparkling red. When we’re looking at the moon during a lunar eclipse, we’re seeing the light of Earth’s refracted sunset-sunrise, enhanced by Earth’s atmosphere and pollution, being bounced back to us.

It’s 5am and I wrap myself in a woollen blanket as I excitedly head to my rambling back garden in Melbourne, Australia, to search the shadow-black pre-dawn sky. I’ve heard about the enormity of the Blood Moon eclipse and want to experience it. Immersed in the wet-Earth smell and mid-winter cold, the quietly rustling leaves hint at another presence and eagerly scanning the sky I eventually I locate it, silent and low on the horizon: a huge red disc, resplendent in orange glitter, steadily travelling downwards in slow-motion free-fall.

I don’t know how long I was able to see it—it seemed only seconds but was probably 15 minutes—before it sank into obscurity. And then it was gone! Stunningly beautiful, enormously powerful, I was completely awed but I wasn’t prepared for the following feeling of loss. Somehow the finality was foreboding and filled with portent. A death, of sorts. A warning from the universe?

Chilling beauty. Calling us mere humans out. And calling us in.

The emptiness that remained from the finality of the event made me feel my inconsequential humanity as a little speck standing at the end of my garden. All our endeavours as humans on this Earth, thousands of years of hope and history, culture, skills and knowledge, were rendered suddenly absent of meaning to me. Suddenly I saw a world where humans didn’t exist and were not needed. The planet and indeed the universe have never needed us and would be just fine without us.

It was soon clear, plenty of others felt the same as the circular red images flickered around the globe on social media coupled with messages of awe and profound disturbance and melancholia. The great mysterious beyond was speaking to us. The smallness of Earth, the unimportance of humanity to the universe, the red of the blood moon enhanced by Earth’s pollution taunting us with the inevitability of climate change, all came together at that moment with fear, with frustration and with anger at our inability to plan for the long haul. 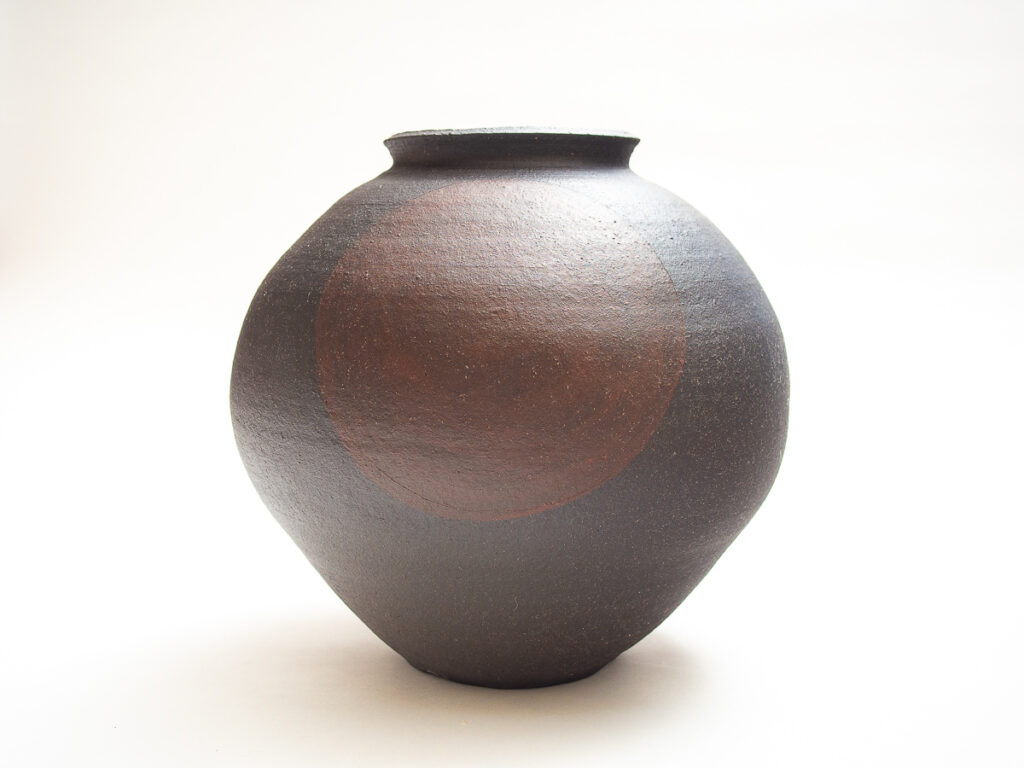 It presents a new spin on an old problem. I have never searched outwardly for answers from or in the universe. I don’t read science fiction and I don’t harbour fantasies of interspace travel. The Earth has always seemed enough, bountiful, green and watery. I grew up on farming land in Murray River/Wiradjuri/Yorta Yorta country where the largest river in Australia flooded annually from the spring rains and mountain melts. Surrounded by water like this, I was naturally drawn to the fluidity of clay when young and sought to study ceramics. After learning the craft and trade of pottery, my artistic expression naturally became located within this fluid bounty and later extended into notions of movement, gesture and sensuality.

Yet change happens. The Murray River almost stopped flowing a few years ago in one of the longest droughts ever experienced. Land and water protection, indigenous knowledge and history, farmer’s activism and a naive (at best) corrupt (at worst) government in denial entered a circular discussion with no solution. In my work I tried to give the voice of protest to the trees and the river, literally preserving and recording them in clay. This resulted in an installation, River Reflections. I knew I was powerless and inarticulate in person but these debates seemed somehow to be more possible to communicate in, or through, my medium, clay.

The focus on water and the politics of who owns it continued into my next body of work, Rain Shadows. Whilst researching water vessels from dry countries around the Mediterranean for this project, I fell more deeply in love with the ubiquitous red of terracotta clay that I have used for most of my working life. The exhibitions that came from that research became an intimate response: vessels to save humanity and to lift us from despair. 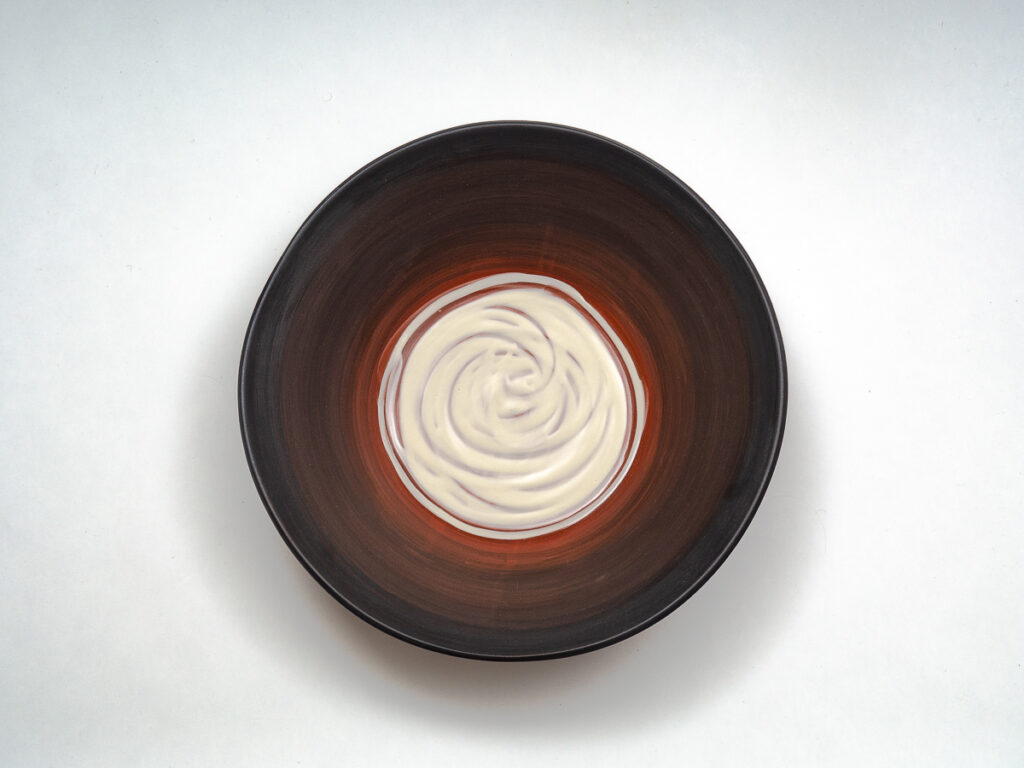 Forgive me for this slight digression into my previous work. The context is to explain how the lunar eclipse added another level of calling, louder and clearer, and in doing so informed my next body of work, Planetary, which was guided by the universe and the haunting imperative message at the end of my garden.

The pieces contained in this series were birthed from the eclipse and thoughts of other worlds, together with the mysteries of space and the silent revolutions of the great orbs in the sky. Our fragile pale blue dot suspended in black; spheres, spinning, sharing the humble materials of planet Earth, yet lifted towards the spiritual. 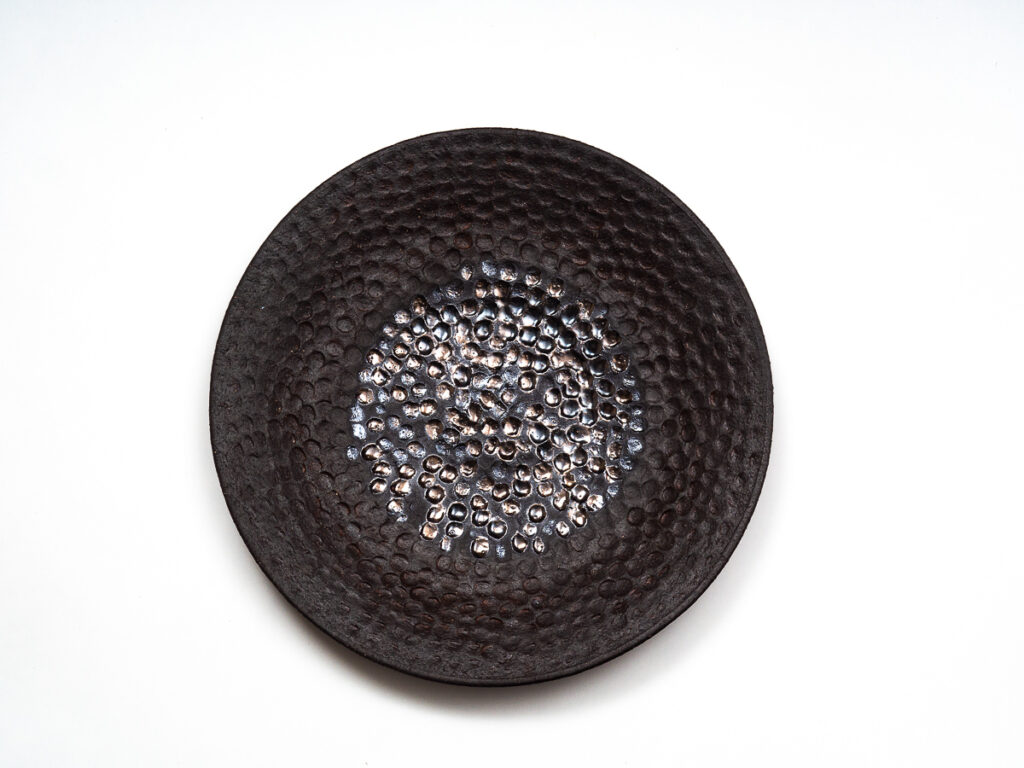 The very materiality of ceramics also beckons to be explored. The silica and iron in the clay that I touch every day must contain traces of dust from other worlds. What can they tell us? Can we facilitate or create a voice for the Earth through materials like this? What obligations do we have to honour these materials, these molecules of deep-time mystery and communication…and the history and stories that are contained in the millions of years of weathered particles that pass through my inconsequential hands when I am making?

During the making process red moons became fluid, gas giants became dwarfs, stars collapsed into abstract forms, black holes became golden, Korean moon jars, pure and white, were appropriated and morphed into Australian Eclipse Jars, murky and black. And underneath it all, I searched for that elusive red.

I get excited to read that the moon is covered in ultra-fine, glass-like rock dust called regolith, which has a special property called backscatter. This bounces light back the same way it came from, in this case toward Earth. Backscattering also explains why full moons are far brighter than in other lunar phases. And regolith is also found on Earth, Mars and some asteroids…. 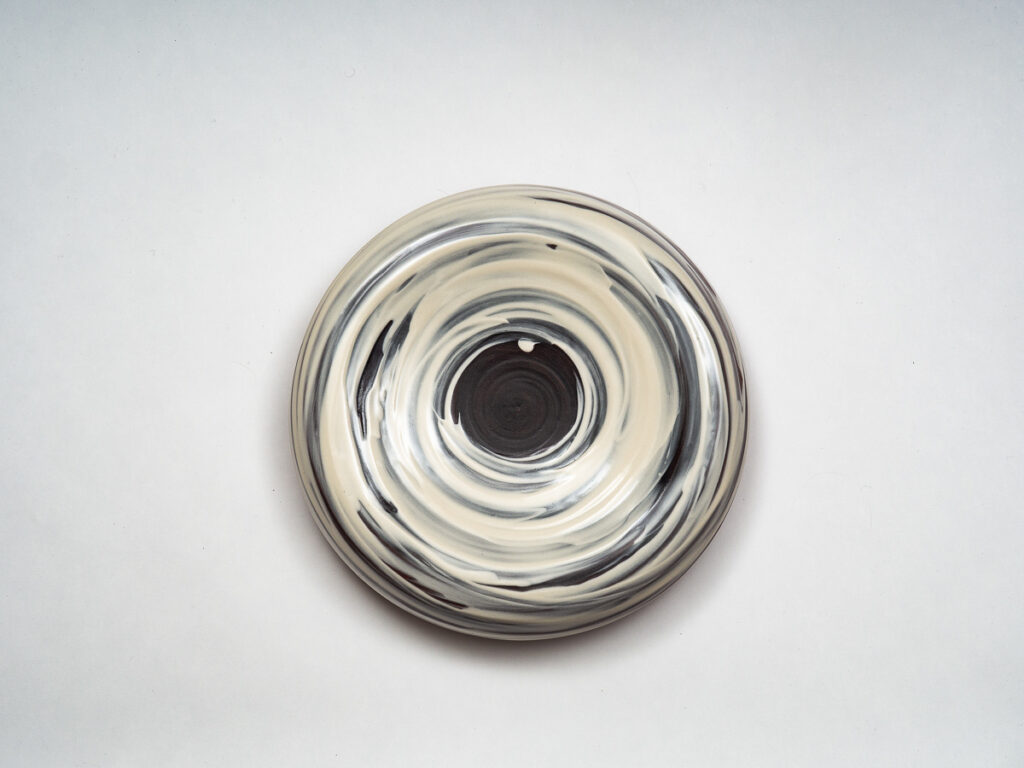 I have worked with a clay type, a natural terracotta, for over thirty years now. It is a love-hate relationship as sometimes the harsh red annoys me and I need to temper it. I have often yearned for a deeper red and have only occasionally found it. Terracotta clay is a ubiquitous clay found in all continents close to the Earth’s surface. It varies in colour from peachy apricot, orange-red to burgundy due to the different iron content which varies according to geology and location.

The blood moon challenged me to keep searching for a deeper red and I found ochres and other colours, mixing them into various liquid coatings, burnishing and rubbing back until a sheen appeared, firing them in different ways. I would love to get my hands on some of that regolith to add to my experiments! Another clay, a robust black stoneware, gave me a contrasting background for the red studies and also with luminous gold leaf.

The challenge accepted from the lunar eclipse’s call to action continues to drive my ceramic work. Most recently I have explored the notion of collapse whilst living through the 2020 pandemic. This recent work is directly linked to and has evolved from the Planetary series. Another surprising but wonderful evolution is the spontaneous coming together of a group of like-minded passionate clay workers to form a focus group to raise awareness for the environment. We are called Clay Active and are keen to work with other similar groups and welcome any enquiries. 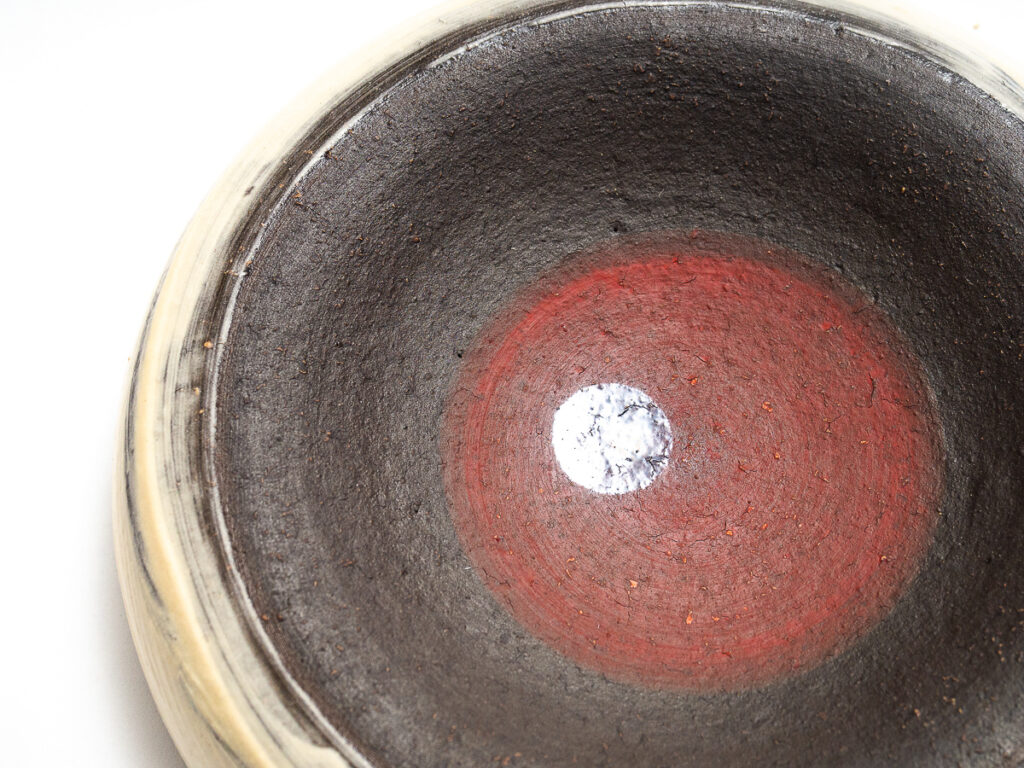 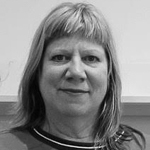 Jane Sawyer is a ceramic artist and educator based in Melbourne, Australia. Her studio practice works toward exhibitions, limited edition runs, commissions and collaborations. She is the founder of Slow Clay Centre  an education centre for ceramics study and holds a Masters of Fine Art by research from RMIT University. She is actively involved in supporting and promoting ceramics and craft and is a member of the International Academy of Ceramics and board member of World Craft Council – Australia. See janesawyer.com.au and  @janesawyer1. Clay Active is a closed group for now but please email jane@slowclay.com to find out more.