Mola, molas, mola-ing with the Kuna Yala in Panama 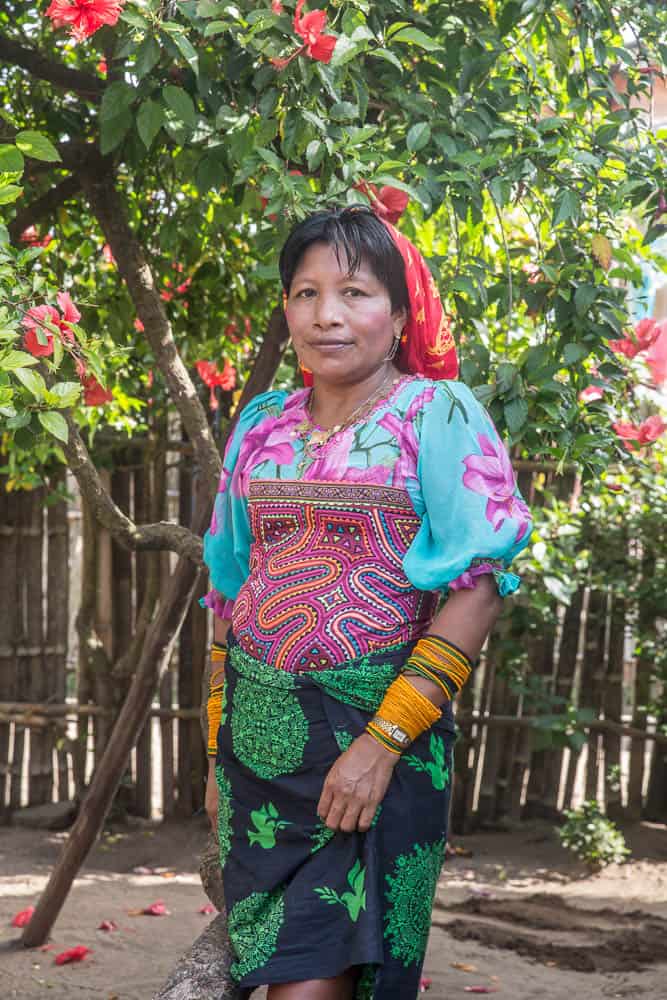 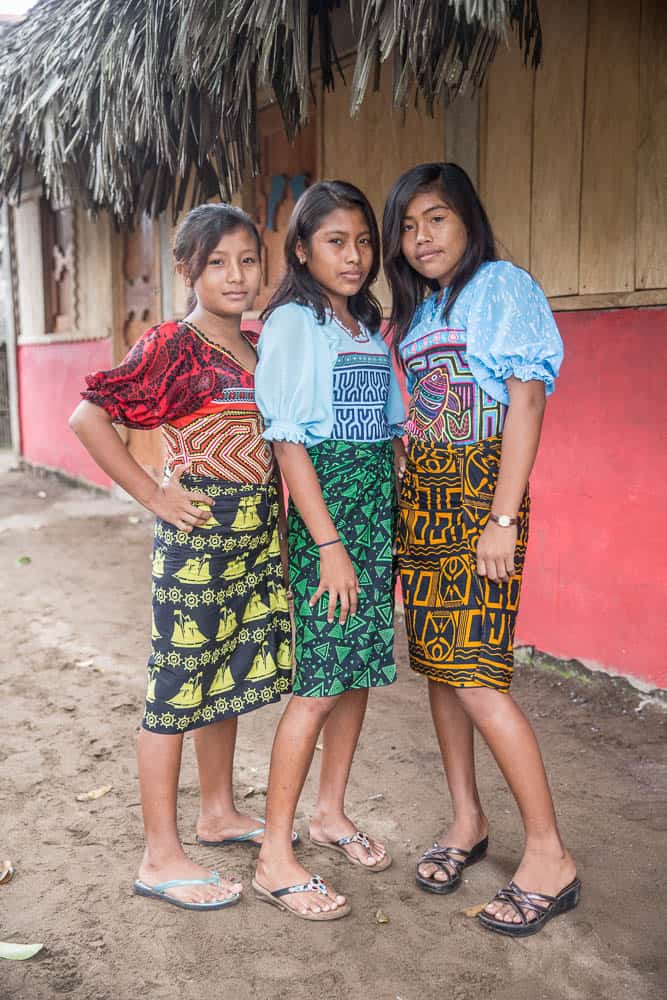 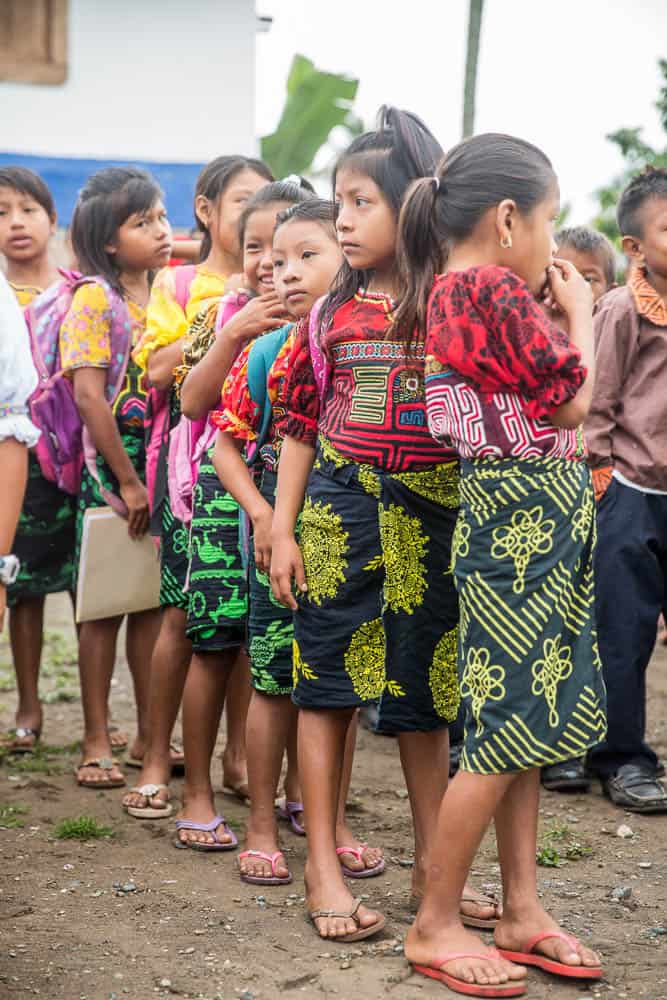 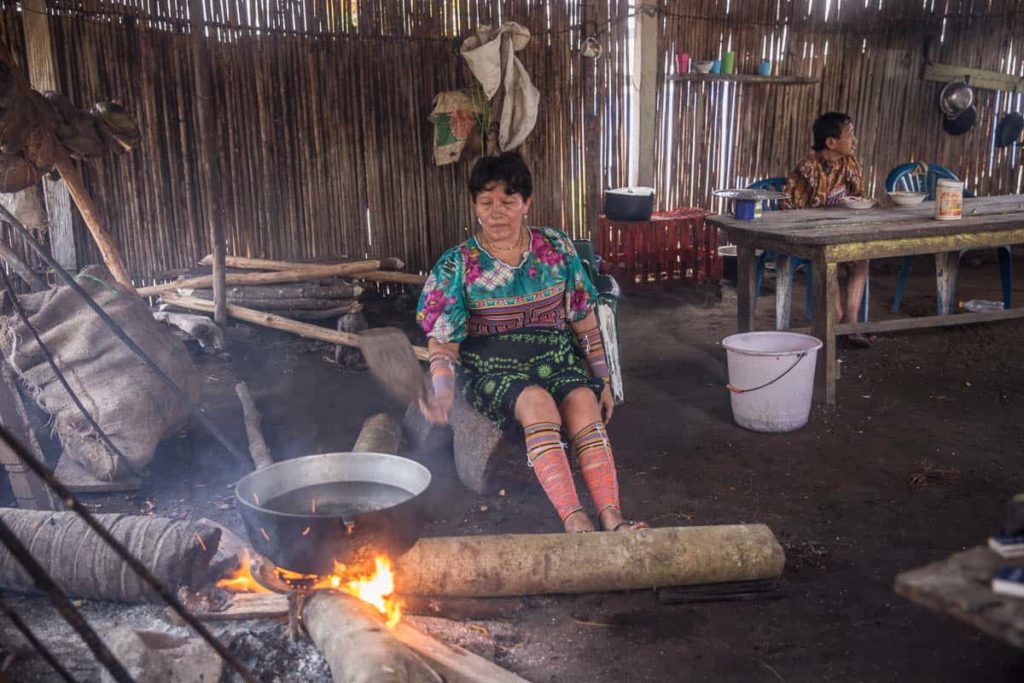 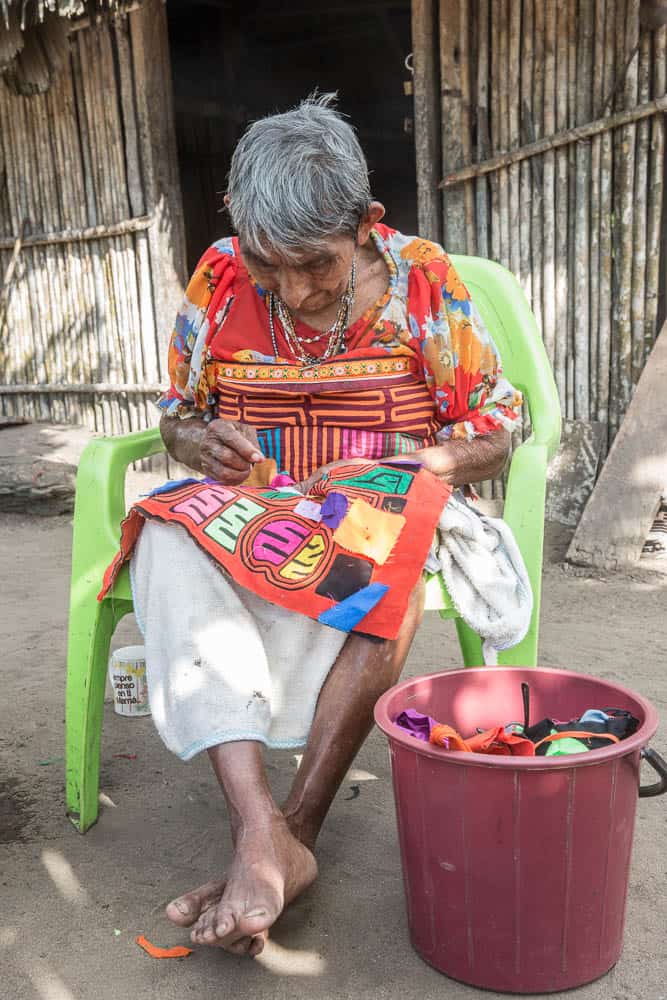 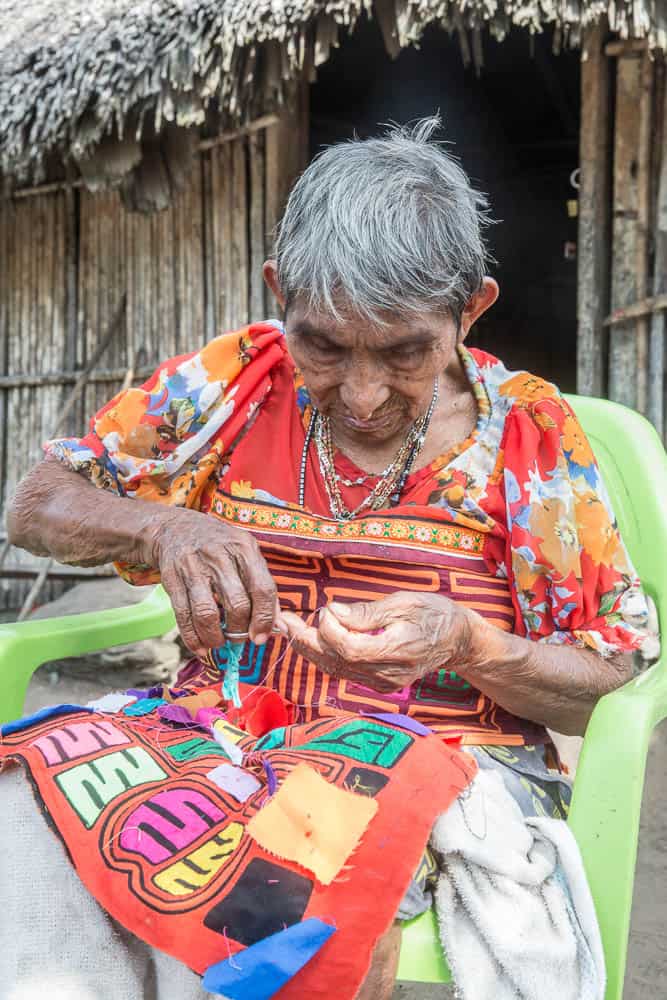 We file into the semi-darkness, a hall of traditional thatch construction, a large space. In the middle of the room, three hammocks gently sway. We are informed that these contain the Silas (elders also sometimes referred to as chiefs). The scene resembles theatre in the round. It is, in fact, Congress; a coming together of the community three evenings a week to discuss matters of concern. We are a group of eight artists from around the world gathered here in Armila to spend time in this remote indigenous community in Panama.

Our presence here is facilitated by La Wayaka Current, an English/South American duo who have set up a not-for-profit aimed at enabling artists to spend time in remote natural environments reflecting on the socio-political and environmental issues that underpin human existence today. We enter the semi-darkness and are led to our seats near the centre of the room, behind where the Silas sway. Proceedings are carried out in Kuna, the local language. A man from the audience stands and moves to the centre of the space where he appears to outline his issue. Others move in and out of this space as they too have something to say. The atmosphere is a mix of formal and informal; shuffling and murmuring amongst the audience, people moving about, children running around, all of which takes place in the semi-darkness punctuated by cones of light, revealing women wearing headlamps and working on their molas.

A mola is a rectangular textile panel that is made from layers of coloured cotton meticulously cut, turned, and sewn creating intricate patterns. The panels once completed, are made into blouses. We were told that the blouses were made to imitate the dresses of European women of the late nineteenth century, the style having been modified over time. The genesis of the panels and the patterning reside in the Kuna Yala creation story, where a brother and sister are sent to earth by God. The girl then dreams of the motifs, geometric forms of plants and animals and brings these to life. The method of making appeals to me as a process of “peeling away”, rather than an “adding to”. In trying to understand the Kuna culture it may provide a means of conceptually discovering this place and its people, the Kuna Yala.

The mola first caught my eye because it is so apparent in the community. Women wear a blouse made with a mola as the front and back panel, stiff, tight and bright. These are embellished with soft full, floral sleeves, and finished with a highly decorative brocaded neckline. This blouse is worn with a piece of printed fabric, wrapped around to form a skirt, and a red and yellow head scarf. Some women wear this most days, although the headscarf is only added for special or more formal occasions. On asking more about the wearing of the mola, I discover that girls are required to wear them three mornings a week to school and it is compulsory to wear it to Congress. Everyone makes their own and girls are taught to make them from eight years of age. The making and wearing play a critical role in the coming of age rites of passage for females. It is revered, and both worn and made with pride, it is not something you can opt out of. I asked numerous different women, what would happen if you were no good at sewing? It is inconceivable.

In 1925, the Kuna Yala gained their independence from the Panamanian Government through a hard-fought revolution. This is an achievement of global significance and one of the reasons I was interested in coming to this place, seeing it as an opportunity to witness an indigenous group living autonomously within their own social-political structure and environment. Whilst the Silas swaying in their hammocks when we visited were men, it is not a male right and women can and are silas at times. Property is handed down through the women in a family, at marriage the male moves to land owned by the wife’s family. Ceremonies of importance relate to various stages of female growth and maturity. The wearing of the mola plays a central role in these ceremonies. In Armila, this small isolated village in the frontier zone of Panama/Columbia, hovering between subsistence farming and a mechanised world, it is the mola that pervades and infiltrates all aspects of life.

We gather for a mola workshop where two women demonstrate the making process whilst our male host tells the story of how designs were sent by God to a girl in her dreams, and that these very early designs where geometric renderings of nature that hold spiritual significance relating to the songs and stories of the Silas. Fundamental to an understanding of Kuna culture is the notion of God as having made earth for man, and that man must respect and protect the animals and plants and work with them to preserve harmony. More modern mola designs have become more literal, whilst maintaining the connection to nature through the depiction of plants and animals relating to this fundamental ideology of the culture.

My own reading is that these literal designs also reflect a response to a commercial market. As well as playing this critical role in cultural life, at the same time, it has become a product with potential economic value. Early visitors to the Kuna region, which stretches out along the north coast of Panama and includes 365 islands, bought molas and a market has developed. In Armila where the only access is by local boats and there is no infrastructure to cater for tourists, finding ways to sell molas is a challenge. There were stories of molas having been sent to Panama for sale and the monies not returning. The few who have family who can act on their behalf are the lucky ones.

To return to the effect of the mola on my consciousness. Significant to us foreigners was the local shop as it provided access to the internet and so was visited by most once, if not twice a day. Here again, the mola dominates as fabric, cotton and sewing needles, are kept in abundant supply. The only other items in such abundance were washing detergent and rice. There was usually at least a couple of girls sitting outside the shop involved with its running, whilst simultaneously working on their molas.

At the end of my time I spent a morning at the tiny airport in Puerto Obaldia, where the border dwellers are much more forthright, one could say bossy, and the environment feels somewhat hostile. After a couple of hours a Kuna woman arrives in her mola and traditional dress, she stands figuratively speaking apart. No one bothers her. She smiles at me and I smile back in reverence. She has and is something very special. The next day in Panama City I see the same woman again, this time across the square, still in her traditional dress and still inspiring the same respect and reverence for her personage. As she moves further and further away from her home her identity does not weaken, she is the proud maker and wearer of her mola, and all that this represents.

Photographs are by Paula Teller.

Drawn to the mola as I was, I wanted to try and make one myself, to experience the process and learn something of what lies within. The demand to focus on the minutiae is addictive. I am drawn to the complexity of the reversal, the peeling away rather than the construction of something. My attempt is poor, to say the least, but it helped me to maintain my sanity over the 36 hours on the plane home. I wanted to make a mola as a kind of map of the village, and am still toying with the idea. Recently I went to an exhibition of “art quilts”, where there were examples of the reverse appliqué technique, used to achieve an aesthetic which it did very successfully. But somehow it felt empty; the mola in its correct context is very other. So the jury is still out on whether or not to make a form of mola, and if so how I could describe the fullness of its role in declaring and maintaining identity and belonging in a changing world. 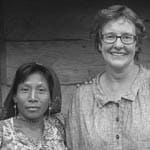 I live between Melbourne and a rosemary farm in Gippsland. Curiosity about the natural world and the part humans play in this is my driving force. How our relationships with land and all its plants and animals make us who we are and perhaps how we can recognise and appreciate our role within this. I am currently working on prints for The Overwintering Project, which is about migratory shorebirds and just starting on the Art of the Threatened Species where my focus is on the Little Tern. I work across media searching for ways to engage with others and use or at least evoke the sensation of touch. (Image of Bridget Nicholson with Marleni Campillo).

Heritage Chic: The duality of tradition and innovation in the Kanjivaram silk sa...
Material culture in Arabia: Bedouin women and the art of sadu weaving
A semiotic thread: Maya Traditions Foundation's Textiles Tour in Guatemala
Raci's mangrove apple: A batik message from the coast of Pasuruan to the fashion...
The fabric of memory: Story cloth as art and history for Hmong in USA
Thanks giving in Australia: Eva Heiky Olga Abbinga's Rajah Quilt
Cielo rojo (red sky)
Can Suzhou Embroidery be contemporary art?