Mother Whale and the creation of Nerrm: A Bunwurrang women’s dreaming story 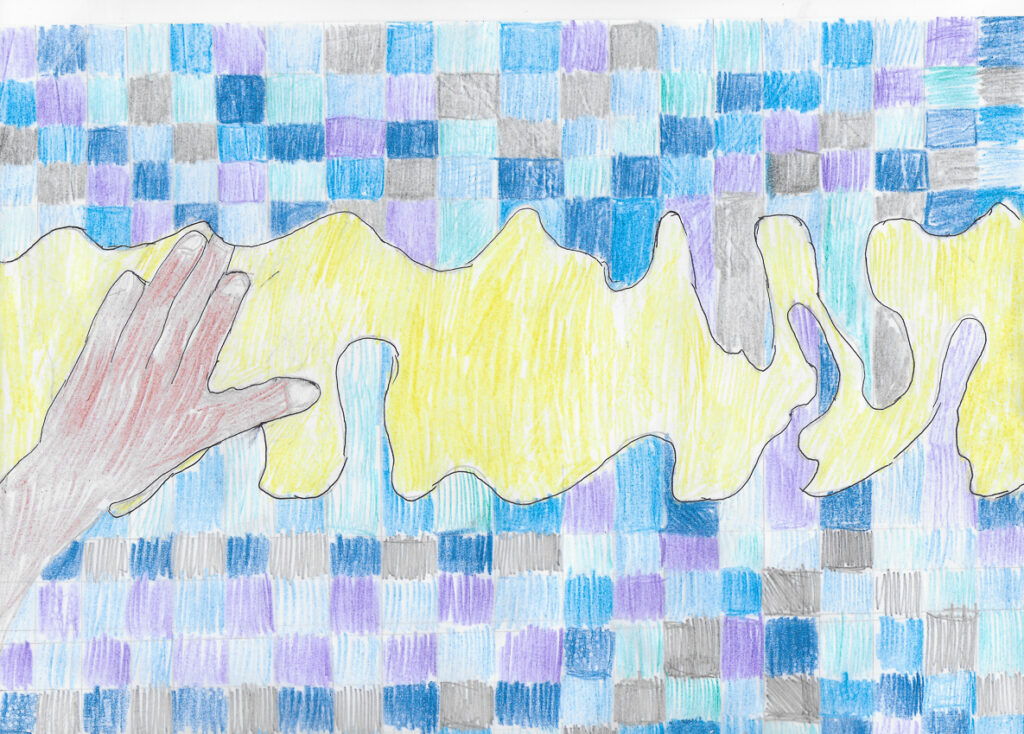 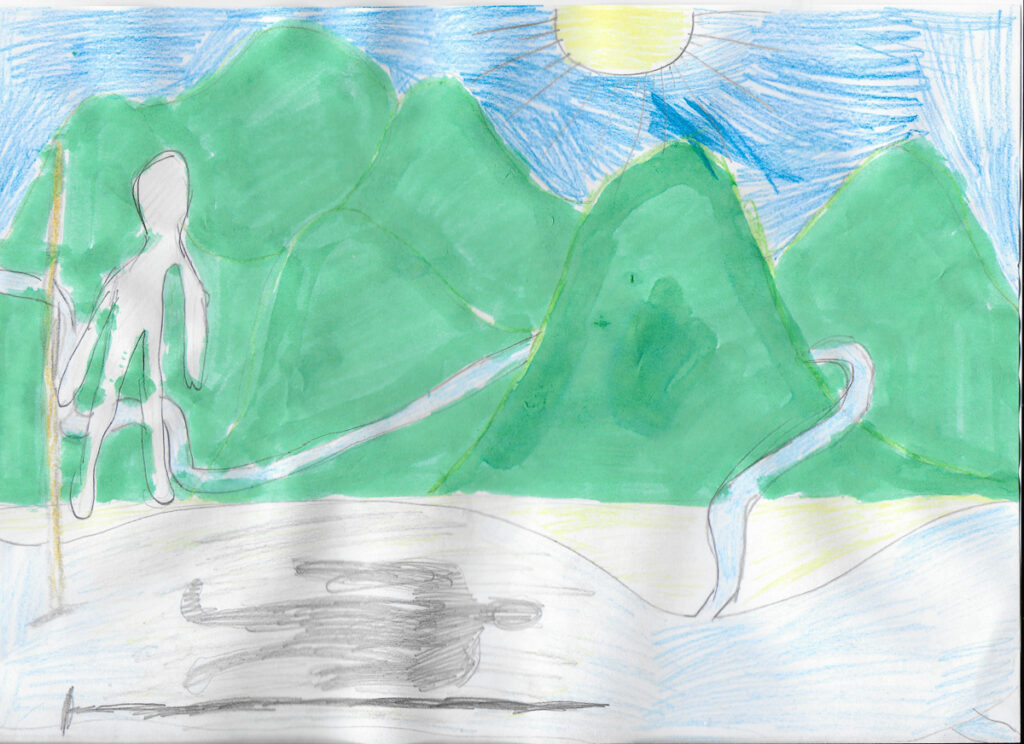 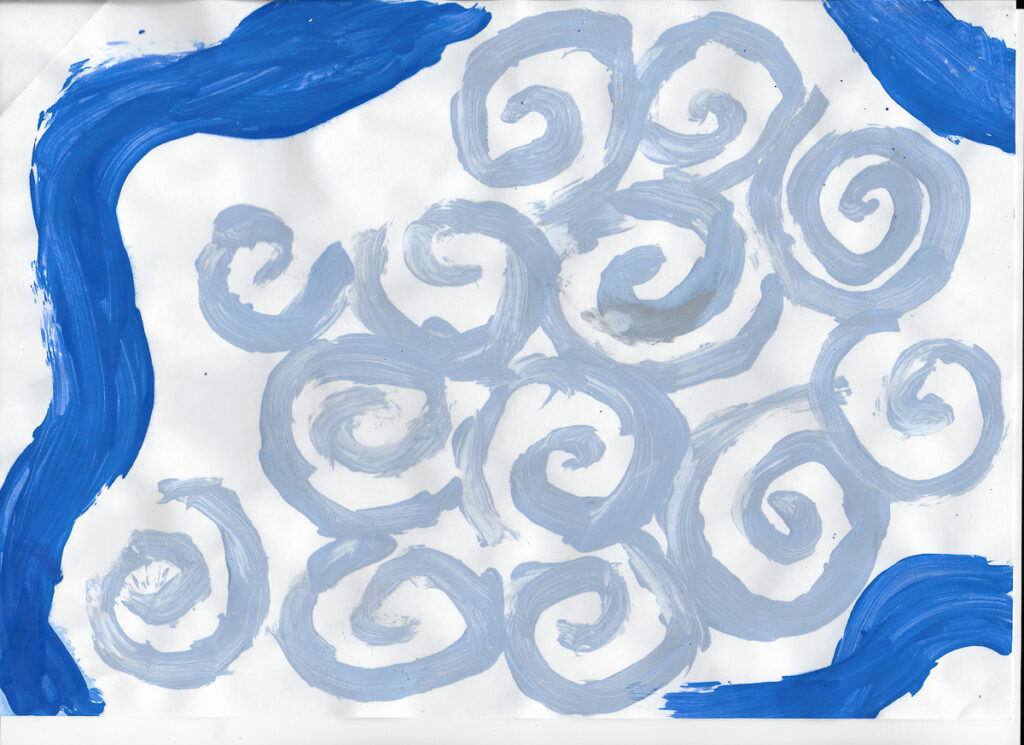 A long time ago, when vast fields of grasslands and murnong covered Nerrm, and the mighty Birrarung and her tributaries flowed through them to the sea, the Bunwurrang women practised their cultural Lore at special women’s places along the river, all the way down to the shores of the deep blue sea. There, they stood on the ridges at the very edge of their land and lit their fires, singing to and dancing for the great Mother Whale,  Parbayin Betayil, as she guided the mother whales and their newborn calves to the safe resting place she had created around Korriyong and Djouap. There, the women learnt the sacred ways of Womanhood and Motherhood, of harmony and balance.

But soon, a time of drought scourged the country and neighbouring lands. The tributaries dried up and the mighty Birrarung grew thin. The eels swam to better waters, the birds flew away and the animals began to die. The Bunwurrang and their neighbours grew hungry. And soon, the fighting began. Men from different clans tried to claim each other’s Country. Boundaries were broken and women’s sacred places were ignored and desecrated. As harmony was shattered and balance destroyed, the Bunwurrang women could no longer create children, and they cried in grief and despair.

Watching from the highest points of their country, the Old Women knew what they had to do. And so, when Meniyan (the Moon) was full and bright, they stood tall and strong on the many peaks and ridges throughout their Country and lit a ring of enormous fires.  Pulling their remaining children around them, they danced and sang their old songs, calling out loud and desperate to Parbayin Betayil for help.

Roused from her resting place near her calf Djou-djou, the great Mother Whale heard the Old Women’s impassioned pleas, and swam to the edge of the deep blue sea. From there, she saw the devastation of the land and the destruction of the women’s sacred places.  She saw how the once fertile lands were now barren and how all the animal and plant life had disappeared. As the bringer of life from the water and deep places, Parbayin Betayil decided to restore the balance.

Taking a deep breath, Mother Whale dived down into the dark depths of her ocean world.  From there, she gathered all her strength and with one mighty push, thrust her way back up to the light of the moon, breaking through the surface of the water, and breaching high into the air. A gust of wind and sea spray whipped around her, like a hurricane.

On the land, the men felt this stormy blast hit their faces and they looked up from sharpening their weapons. They stared in wonder at the dark shape soaring into the night sky, blocking the light of the full moon. In fear and awe, they dropped their weapons, and ran as fast as they could to the higher ground of the closest ridges. They kept their faces turned away because they understood that they had broken Law, and that the great  Mother Whale had arrived to bring retribution.

With one forceful turn of her enormous body, Parbayin Betayil crashed down upon the dried up grasslands of Bunwurrang Country, and the earth shuddered and shook, sinking lower than the sea. Flicking her powerful tail upon the men’s campsites, she destroyed their weapons. Then, with a deep, thundering song, she called out to the ocean to rush in and claim the land. As the sea rose up around her, the Mother Whale blew a myriad of abundant life from her blowhole to fill the newly created bay. The waters soon began to teem with fish and shellfish, plentiful and healthy.

As the dawn light crept over the horizon, the Old Women, and their children, rushed down from the ridges and stood on the newly created shores. They had lost their dried up fields and grasslands, but had received instead, a beautiful bay, filled with life, Nerrm—the sacred water place from which life springs. Renewed energy and happiness stirred in their bodies again, and tears of joy and gratitude streamed from their eyes. New songs spilled from their mouths in praise of the great Mother Whale and their bodies moved with new dances.

Parbayin Betayil saw the women’s tears and she blew forth a gust of wind from her blowhole. It caught the tears and scattered them across Bunwurrang Country, forming new tributaries, wetlands and creeks, which all bled into the bay. These waters of Nerrm were Sea Country now, and it was the solemn duty of Bunwurrang women to honour and care for them.

A loud call from Mother Whale caught the attention of the Old Women and their children. They saw Parbayin Betayil turn her enormous eye to look at them and the women understood her message … she would always be watching. The men stayed on the ridges with their faces turned away.

As the sun rose on the new day, with restored life all around them, the Bunwurrang women made a sacred promise to always protect what Parbayin Betayil had created for them, and they vowed to never again let balance and harmony be broken. 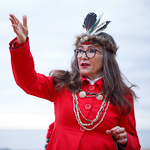 Aunty Gail Koonwarra Dawson is Bagurrk Nilam Wiyakabul of the Naynaygurrk Apical Ancestor Group. She is a bee-keeper, fabric queen and weaver of textiles, grasses and stories, a friend and Bunarong social justice warrior.

Employing circular economy principles when creating craft products
The Material Passport: A model for responsible construction
A healing walk: The Lake Bolac Eel Festival story
Ayvu Rapyta ✿ A selection
The Biji-biji Initiative: Circular economy for the community
Kuulua vuohmaan: Belonging to a mire
Butterflies metamorphose into jewellery
Translating the Ayvu Rapyta: For the love of a rainforest and its word-souls