The forest on my flesh 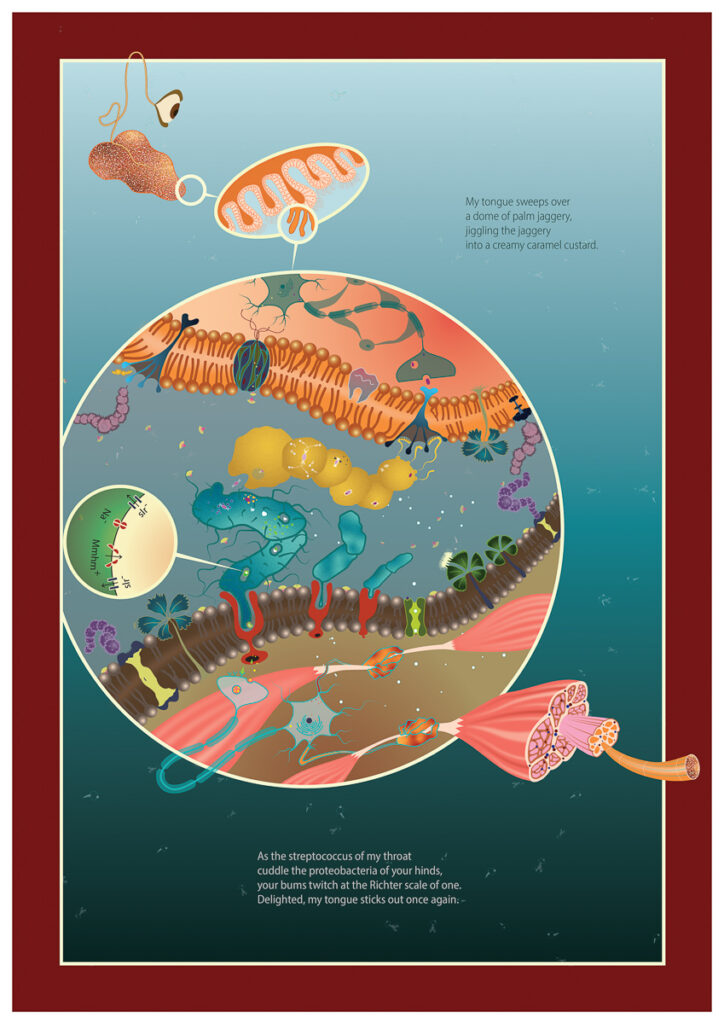 Priyanka Jain draws on ancient Sanskrit poetry and Indian miniatures to reflect a contemporary appreciation of our microbial desires.

“I am living in the strictest lockdown worldwide, and besides there’s hardly any crowd here, so don’t worry”, I tell my husband in Kolkata in the northern hemisphere, while I shiver in the July winter rains of Melbourne, where I have started my PhD. I have waited every month in the hope that borders will open soon and he will be able to join me in Australia.

Finally, two months later, in September 2020, anxious and frustrated, I gave up and returned back to India. In an e-mail to my professors, I joked that perhaps now the microbes of my skin are missing the microbes of my husband’s skin and they make me desperate to return. This fanciful hypothesis arises from my readings in microbiology and neuroscience, which I have been using to write short fiction.

There are microbes (bacteria, viruses and fungi) inside our intestines, as well as on our skin and in all the orifices collectively known as the Human Microbiome. The forests of microbes in the gut process the nutrients of our ingested foods and have nerve endings that connect directly to our brains via the Vagus nerve in the spinal cord. Research shows that through this connection, gut microbes influence our moods and behaviours. The number of microbial cells in the entire human body is almost equal to the number of human cells, in fact, microbes in the intestines outnumber the human cells. One can almost say that there is another being living within us! And this made me think about human agency. Do I fall in love or do the microbes of my skin, mouth and genitals when they “want to make new friends” make me fall in love?

Simultaneously I stumbled across English translations of an anthology of very short erotic verses in Sanskrit named Amaru Shataka. I admired the brevity, the simplicity of language, the observational and the conversational style in the English translations of the verses (which had originally been composed around 750 AD) and felt a similarity with contemporary poetry styles. Many of the verses of Amaru Shataka are said to have been illustrated with miniature paintings and circulated along with sex manuals such as the famous Kamasutra in medieval India. I have been a great admirer of Indian miniatures which show influences from Chinese scroll paintings, western Illumination paintings as well as Persian miniatures but are also acclimatized with unique Indian elements. Something urged me to emulate the style of the Sanskrit verses and write my own. The first one I wrote in December 2020 was about Patali Gur (date palm jaggery), a winter specialty locally found in my home state of West Bengal, where I had relocated from Melbourne.

Example from the Amaru Shataka

Where to
girl with bright thighs?
There’s no moon tonight.
Out to my lover.
Not afraid, young in the darkness to travel alone?
Can’t you see—at my side with lethal arrows the love god?

Sweet dandruff
on your beard…I blush…
Traces of my theft
From the jar of pataligur
Sparkle like stars in the night sky.

Oh, quickly come inside!
And let me melt those diamonds
With the heat of my tongue.

Over time, microbes grew onto the verses.

My tongue sweeps over
a dome of palm jaggery,
jiggling the jaggery
into a creamy caramel custard.

As the streptococcus of my throat
cuddle the proteobacteria of your hinds,
your bums twitch at the Richter scale of one.
Delighted, my tongue sticks out once again.

With each seasonal food, fruit and vegetable, I also investigated their chemical properties (the science of which is called Phytochemistry). 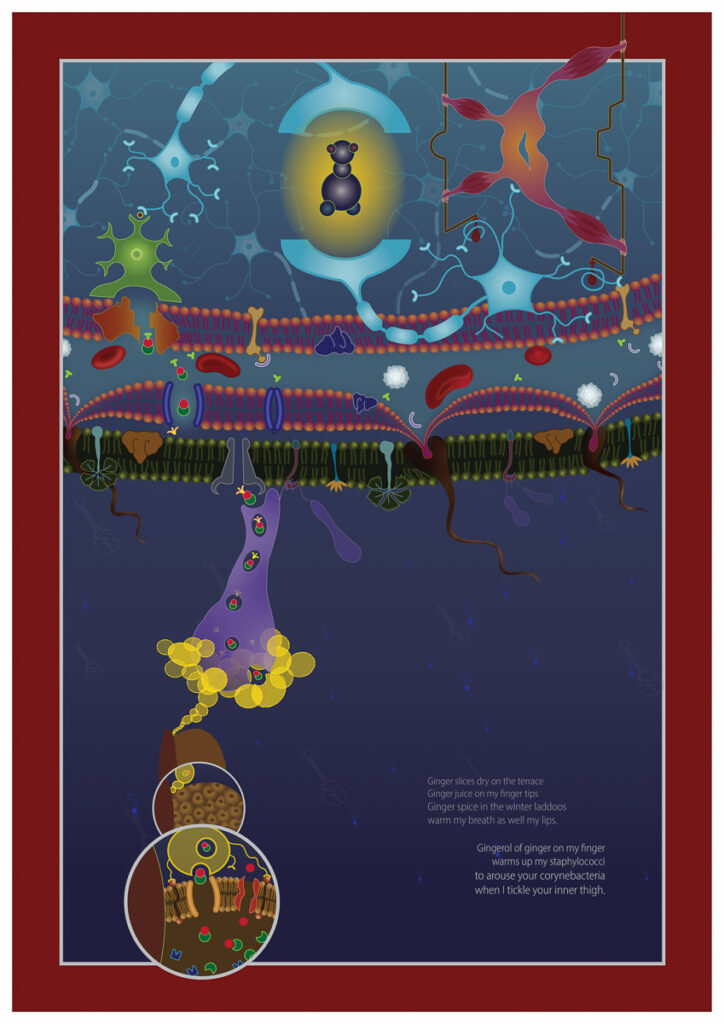 And with the passing of time, the turning of the seasons also floated into my expanding anthology, such as in this yet-to-be illustrated verse.

Summer melatonins drive me away
From your bedside at dawn
Our microbes that kissed three hours longer
under dark silk winter blankets cry
So unfair!
And ignoring our to-do lists
Kidnap us hands and feet
Into a cuddled afternoon snooze.

The verses have a “zoom in-zoom out” characteristic. They start from the outer world, zoom into a microscopic level of microorganisms and again zoom out to display the cause-and-effect in the outer world. The illustrations (which are influenced by Indian miniatures as well as medical illustrations that I constantly come across in scientific articles) also follow a similar pattern. Through various levels of magnifications, I try to imagine the cascade of metabolic activities occurring at microscopic and nanoscopic levels occurring within the body of the microbes and passing into mine. 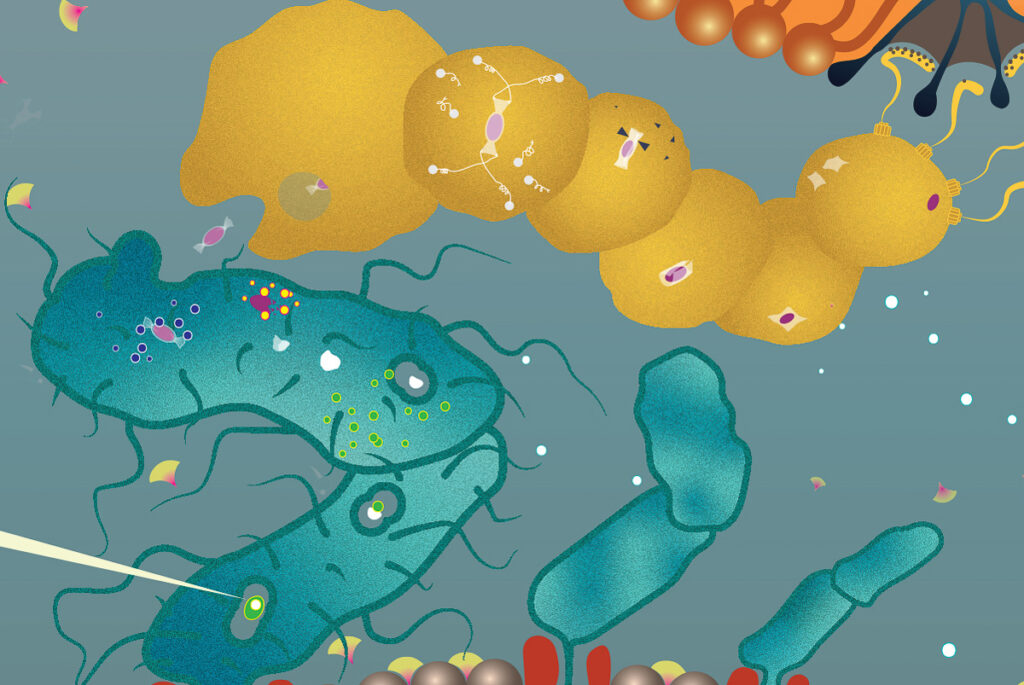 Priyanka Jain, Detail from The Forest on my Flesh-I, 2021, digital illustration. (In numerous steps chemicals break down and become new compounds within the bodies of two bacteria.)

An important site of interaction is the membrane, usually illustrated in cellular biology books as a double row of spheres with two tail-like projections. The skin is a membrane and so are the fine blood vessels in the lungs where gases are exchanged and the walls of the intestines where nutrition is absorbed. Each cell also has its own membrane.

These borders also keep unwanted elements from invading. Some borders are hard, such as the blood-brain-barrier in the skull, that don’t even allow many medicines to enter. Some are soft, such as the skin, that do not maintain very strict controls and allow skin lotion as well as other chemicals to permeate. The concept of borders establishes interiority-exteriority as well as the notion of us and them. All this metaphorical talk about borders is very contextual in our current social politics and hence perhaps becomes a vital motif in my images. They are also very beautiful to illustrate, like a chain of pearls on which I meditatively draw two tails per sphere. And at the borders are guards of various kinds, who require different tributes to allow passage. 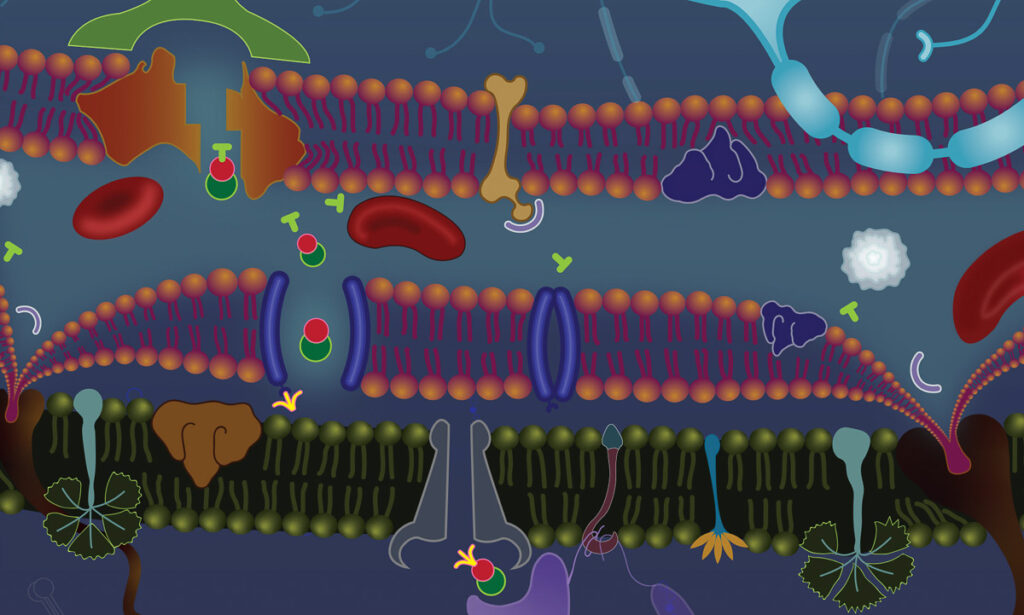 Priyanka Jain, Detail from The Forest on my Flesh-II, 2021, digital illustration (The membrane is made of two layers of phospholipids with various membrane proteins which act as gateways and guards to enable the transport of substances across the membrane.)

It’s a busy scene inside. There are border guards as well as metabolic chemists synthesising new proteins from our DNA. I see much potential for visual humour. Since the medical illustrations I see are digitally rendered, mostly on Adobe Illustrator, I also chose to stick to the aesthetic of such illustrations instead of using gouache on paper, as was used for traditional miniatures to bring in the feel of contemporaneity.

Thus, while illustrating digitally, my fingers also constantly press shift+ and shift- on the keyboard to zoom in and zoom out. This gesture of zooming in and out symbolizes for me the constant interaction of the micro and the macro, the individual and the universe, the tree and the forest, the sand grain and the beach. It reminds us that we are not alone but situated in larger contexts and in constant interaction with our environments as we are relearning during this pandemic,  accompanied with climate change. Lastly, I hope this ongoing series of works is a very timely positive PR intervention for the billions of microbes who have co-evolved with us humans over millions of years and work 24×7 for our health and wellbeing!

Unlocking the ‘gut microbiome’ – and its massive significance to our health. 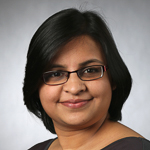 Priyanka Jain, currently based in Kolkata, is looking at Indian recitation and storytelling practices that also use a visual device in her practice-led PhD at RMIT University, Melbourne. She loves making artist books and hopes her next one can be an illustrated anthology like the albums of Persian miniature paintings. Visit www.jainpriyanka.com, email priyankajain_85@yahoo.co.in, follow @visuoral_arts