Egypt reclaims niello: A craft for kings and sultans 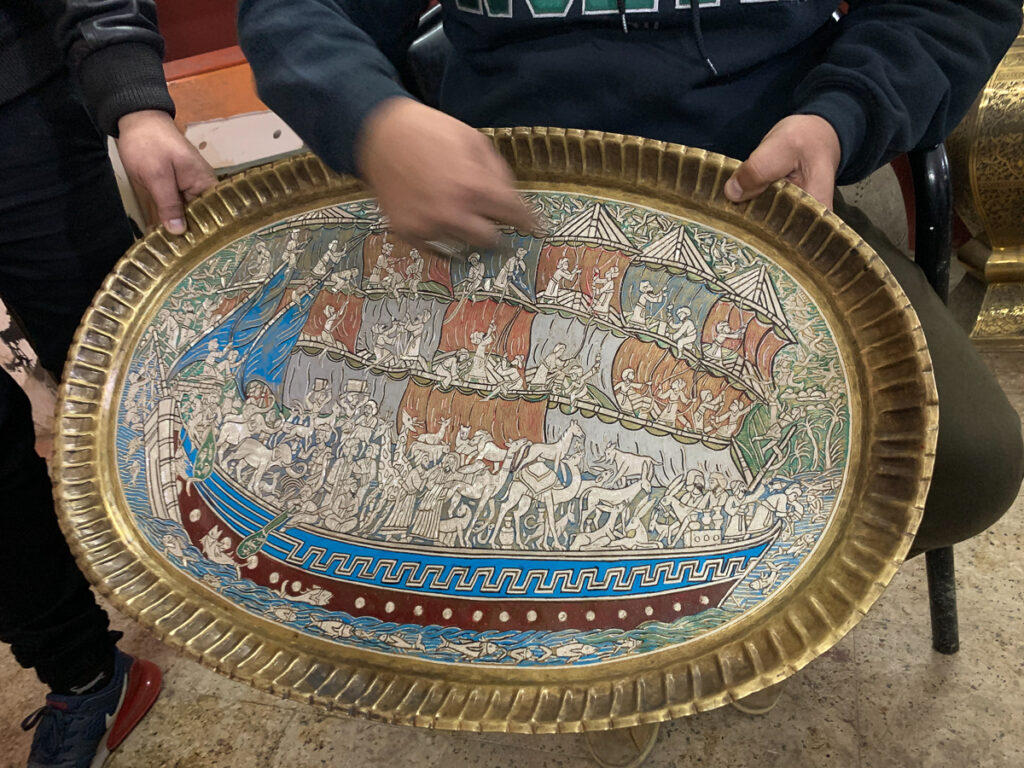 On the banks of the Nile, Passent Nossair finds the source of a quintessential Egyptian craft.

(A message to the reader in Arabic.)

“Do you know the Metwaly Gate?” With this question, Hussain started his stroll down memory lane, surrounded by two of his four sons and a ten-year-old grandson.  With eyes full of pride, he recollected the precious memories of his childhood. “I used to run to my father’s workshop next to the Metwally gate or the Zuweilla Gate (two names for one of three remaining gates in the walls of the Old City of Cairo) once I was done with my studies at the Kuttab ( a primitive single classroom school, found in every neighbourhood and every village. It was the early informal education conducted by a scholar teaching mainly the Qur’an as well as reading, writing, reciting, grammar & basic mathematics)

Hussain, niello master artisan, welcomed me in his new workshop located near the banks of the Nile in Maadi, Cairo. He met my concern for one of our authentic crafts with a wide smile on his face. And he proudly recounted,

“In the 1960s, I was almost 16, when I first assisted my father in working on the door of the Agakhan’s mausoleum in Aswan. The huge wooden door was covered with copper and inlaid with silver.” 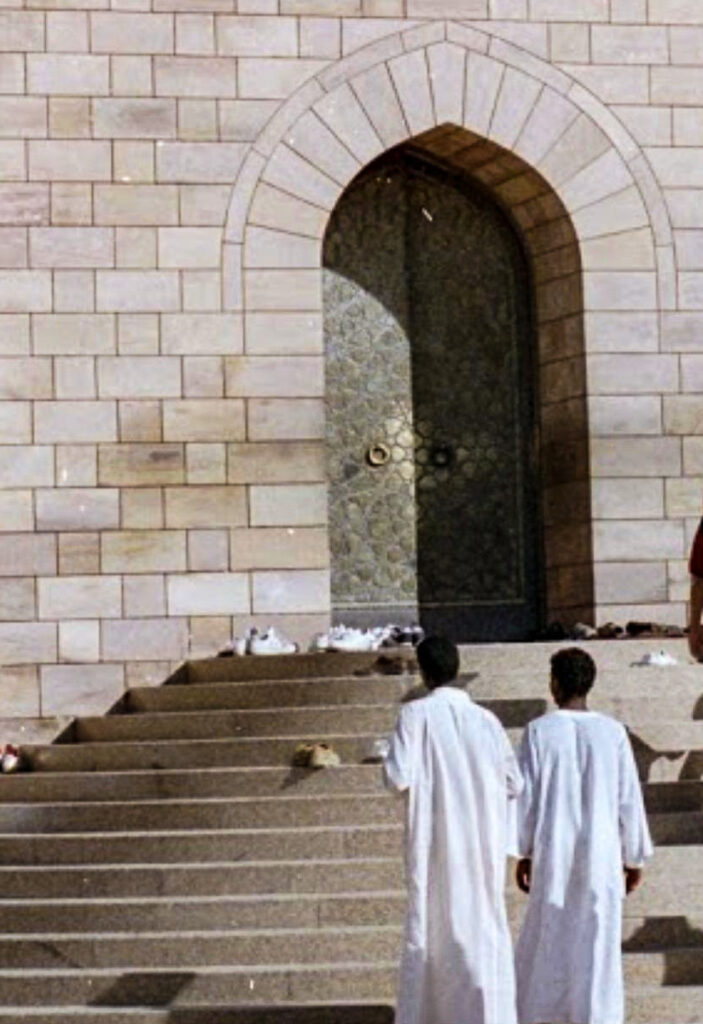 Hussain Abdel Maqsoud Mohamed, a master artisan, spent more than 61 years in the hammering craft of Niello, an art which consists of many techniques and embraces different styles. 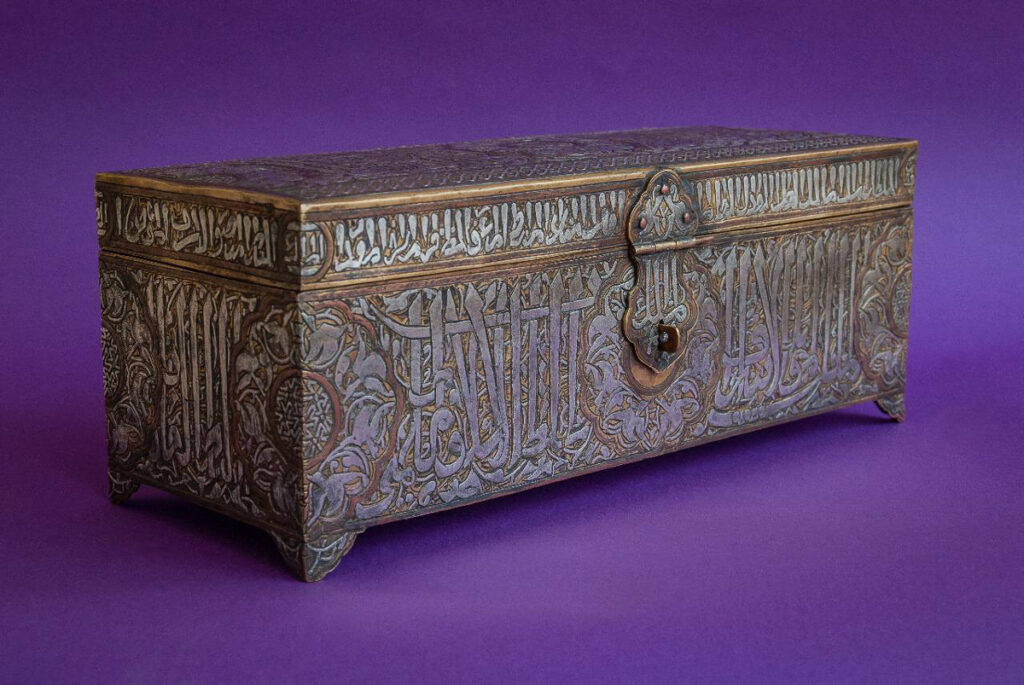 As I dug deep into the origins of niello before meeting Hussian, I discovered plenty of leads. This unique craft is deeply rooted in Egypt’s heritage: some examples were found in the tombs of ancient Egyptian queens. In later years it emerged in other regions such as the Mediterranean basin and parts of Asia and Europe.  Each civilisation adopted its own style. However, it was the Islamic civilisation that was responsible for its remarkable comeback.

Niello, or as it is called in Egypt Al Takfeet, is the craft of brass, copper, gold, silver and lead, used as an inlay on engraved or etched metal. The object could be a tray, pot, chandelier, lantern, jug, basin, or figurines. The first step is drawing the ornaments on the object, to be etched later, then with a tiny hammer and drift pin, engraving the design with meticulous strokes, in an accurate and precise manner, for this is where the silver string will be inlaid. The hammer is then applied, this time right on the string.  No doubt this is one of the most complicated, time-consuming, refined, and delicate crafts. No wonder they call it “a craft for sultans and kings”!

Niello artefacts were highly valued as masterpieces and rare treasures. Every ruler desired this precious work of art to embellish and add immeasurable value to any monument or archaeological construction bearing his name. That was considered a sign of extreme culture, affluence and an extravagant accessory.

Egyptian dynasties were rich in all forms of art, literature, architecture and crafts. This includes the Fatimid era, with all the variety of its crafts, up to the Mamluk era with its glorious crafts, through to the Umayyad, Abbasid, Ayyubid dynasties. Through the years, Egyptian artisans excelled in their authentic works, turning the city of Cairo (Al Qahera) into a dazzling gem.

When the Ottoman Sultan Selim the first invaded Egypt 1517, he was awed by the charm and glamour of Cairo. Stripping its masterpieces and artefacts to take back to his homeland, he also forced all its master artisans and highly skilled craftspersons to be shipped out to his capital Istanbul, in an attempt to transform it to another fascinating city. It took Egypt years and years to recover from such a grave loss.

Mohamed Ali, the founder of modern Egypt, established the Alawiyya royal dynasty which ruled Egypt and the Sudan for nearly two centuries (1805-1952). He had great ambitions and started the development of various fields. Interestingly enough he paid special attention to the different crafts and trades.

He brought experts from abroad to teach Egyptian craftspersons the latest methods and techniques and simultaneously he sent many Egyptians to study in crafts schools abroad and bring back their new expertise in art and styles. As usual, the exceptional Egyptian artisans excelled in their products and were even used by Ali as part of his soft power diplomacy with the Ottoman Empire.  Through their art, he was able to have the upper hand in some political gains.

He sent many of the superior Egyptian artisans to the Ottoman Sultan, as a gesture of goodwill. One of the artisans who were sent by Ali was the great grandfather of the Hussain family who up till now teaches and practices the craft of Niello. 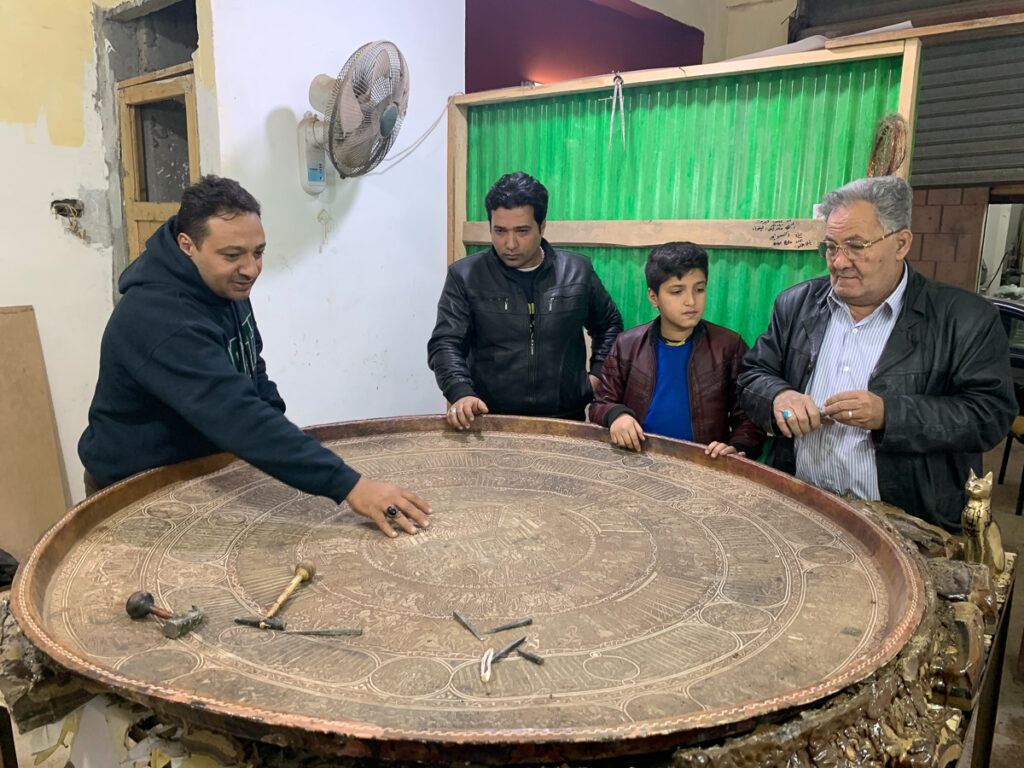 Emad, Hussain’s eldest son quickly intervened:  “But he escaped and came back to Egypt after three years”

Emad expressed his concerns about the current threats facing their craft which now consists of very few artisans who are still engaged in producing those enchanting works. The Hussain family through generations is still dedicated to the craft, preserving the legacy of their great grandfather, handed down through the ages from designs of the ancient Egyptians, Coptic, Islamic and Mameluk periods.

With a hopeful tone, Amr the second son said: “We are passing the torch to the next generation“, pointing to his ten-year-old boy.

“I called him Hussain after my father..“ The senior Hussain smiled!

Amr continued, “It is hard. It is not the same as when we were young. We had minimal distractions. Our time was mostly divided between school and the workshop. Youngsters are captivated by smart devices most of the time. I’m introducing the craft to him bit by bit so as to retain his interest. He is our hope.” 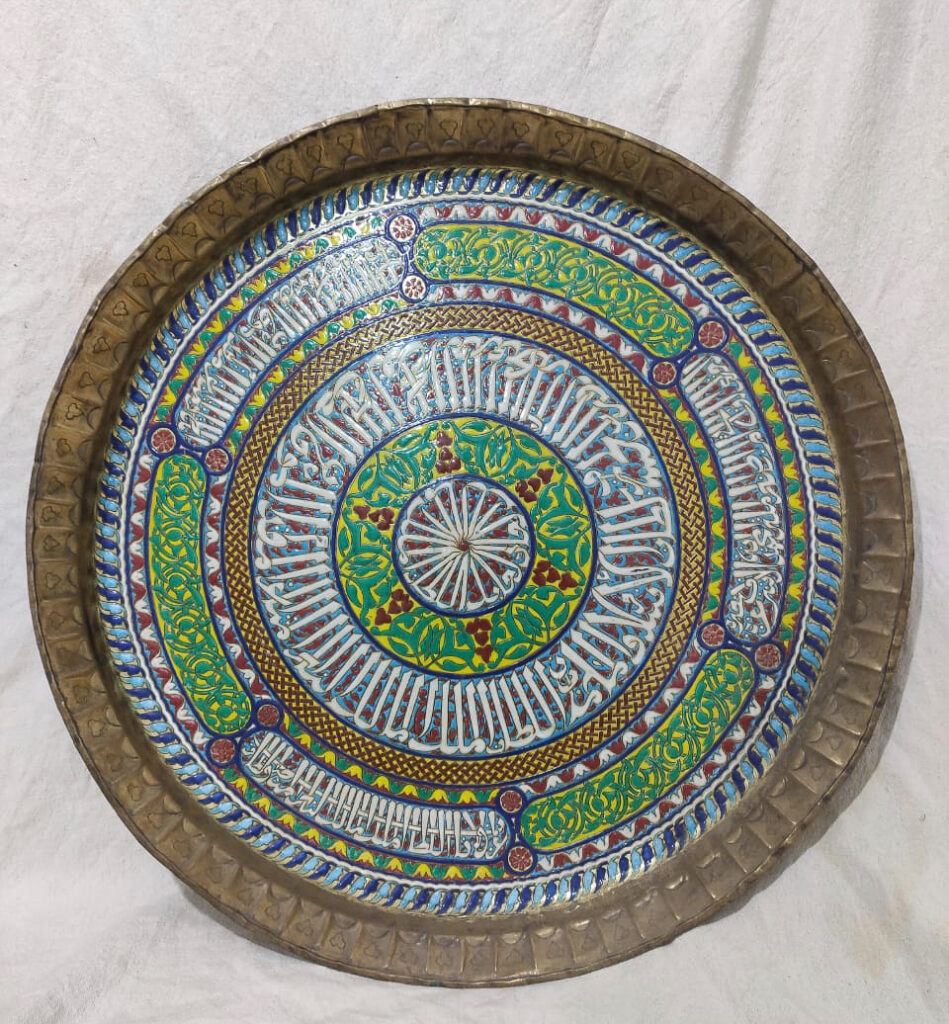 “We believe in our craft and cherish its value”, Emad said!  “At times, however, the ride is a bit rough and challenging, but we still keep up the spirit.  Whenever we can we invest in materials and carry on with the work. It is our joy!  It is our passion!

“We keep working regardless of the number of sales. We are at present working on a project that shall be one of a kind! It is the largest round tray ever made in Niello, with a diameter of 160cm. It recounts the long history of Egypt throughout its various periods. A great deal of research has been done for this project. It is incomparable!

“Nothing like it has ever been done before.” With a subtle smile, he added: “I’m planning to apply for the Guinness book of records!”

He stood up and invited us into his working area. We saw his project. Indeed it shall be one of a kind, a three-generation masterpiece, representing the handiwork of the grandfather, Hussain, his two sons Emad and Amr and his ten-year-old grandson Hussain junior (the hope). They all gathered around the huge tray, describing the work process and the different techniques used under the guidance and orchestration of the master himself, Hussain! 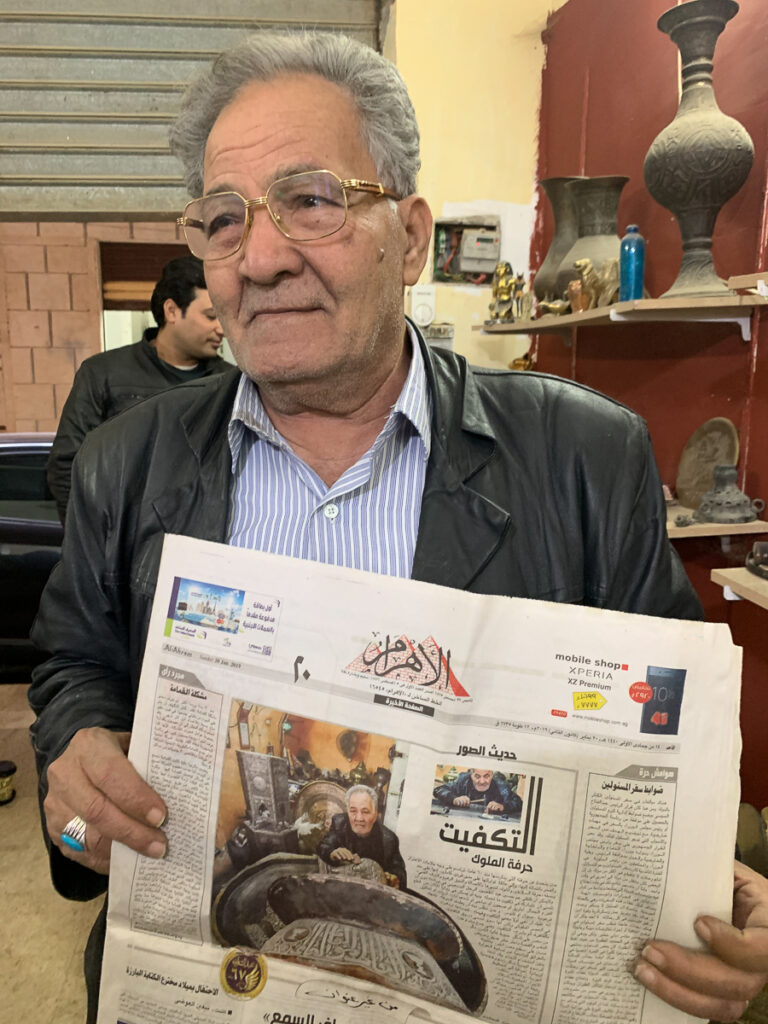 Besides the pride sparkling in the old man’s eyes, there appeared a sense of satisfaction as he looked at his sons and viewed the labour of their hands! Masterpieces of niello could be found in major museums all over the world.

If by any chance you are in Cairo do not miss the opportunity to view the classic pieces shown at the Islamic Museum in Cairo.

It is a lavish feast not only for the eye but also for the mind and soul!

Passent Nossair is a British Egyptian who is currently living in Cairo. She graduated from the Faculty of Fine Arts in Cairo and has exhibited in several art exhibitions. Since her graduation she worked as a designer until she joined the field of handicrafts development, working as a handicrafts business development consultant and designer since 2007. She has worked with different entities, including EU projects, the Egyptian Ministry of Trade and Industry and Aga Khan Development Network. She is a Member of The International Council on Monuments and Sites (ICOMOS) and World Craft Council (WCC), Africa-Egypt.

Islam on Australian shores
The social lamellophone
Paula do Prado ✿ My abuela's hands
My father was an elephant: Clay dreams in Nigeria
Straighten out in Korea
25,000 knots: The hands that make Baba Tree baskets
Maker mythologies: Classical origin stories for the crafts
Butterflies metamorphose into jewellery