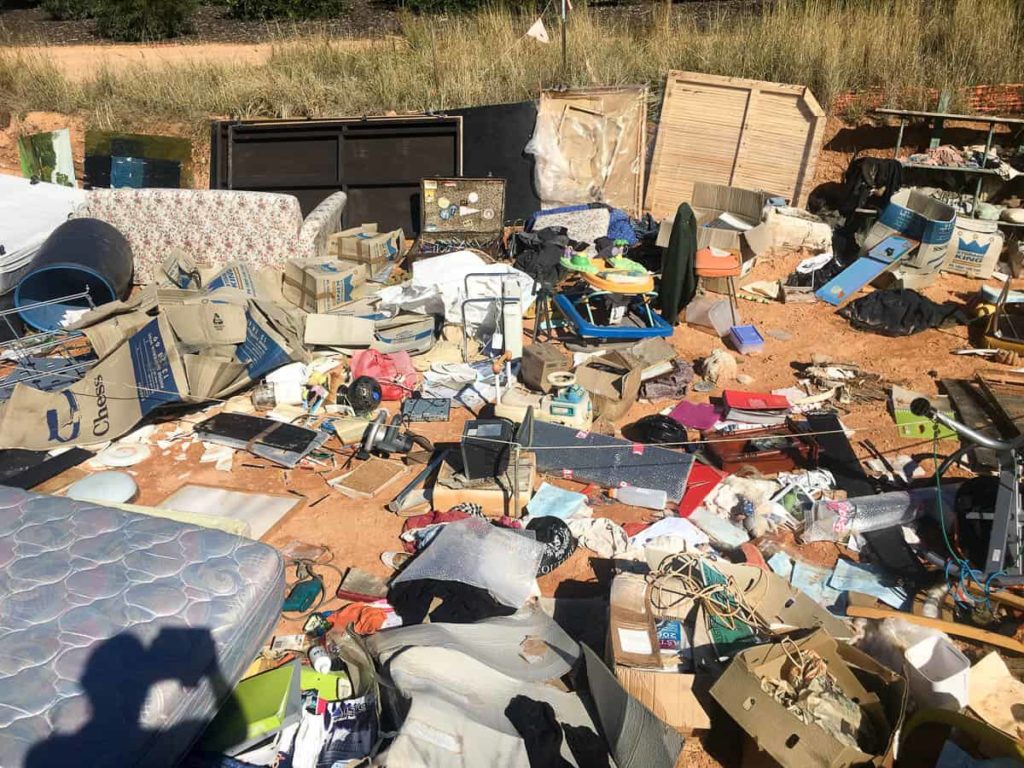 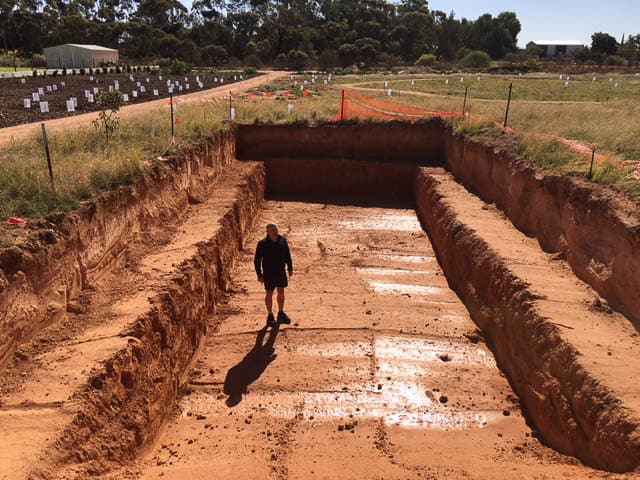 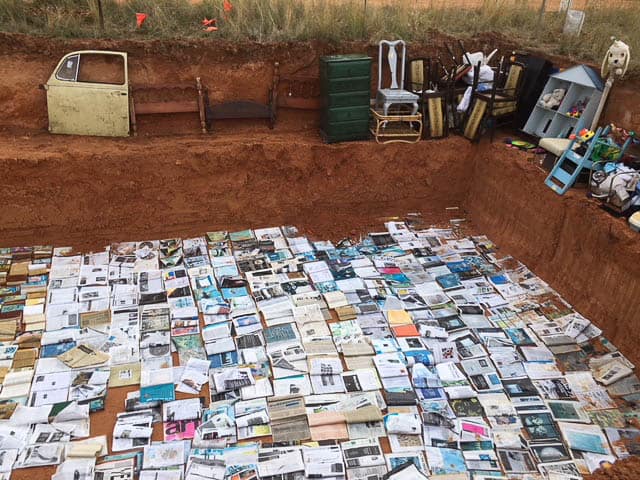 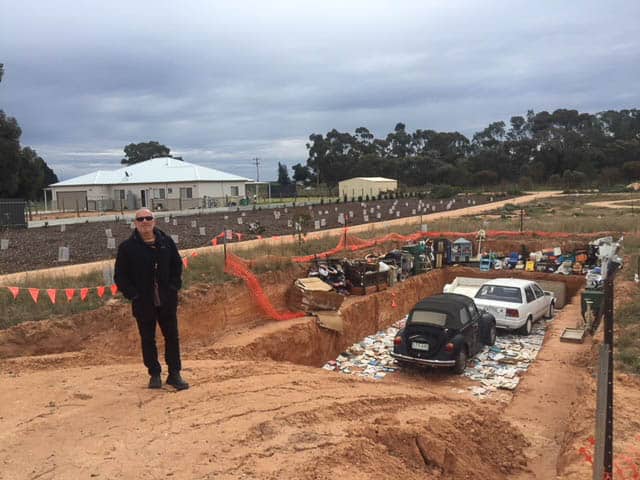 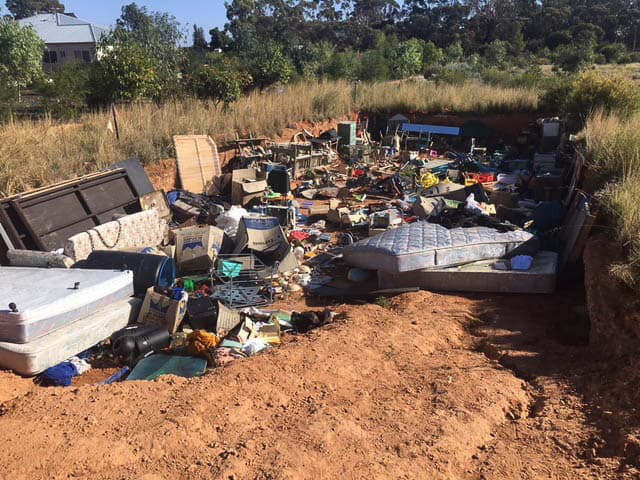 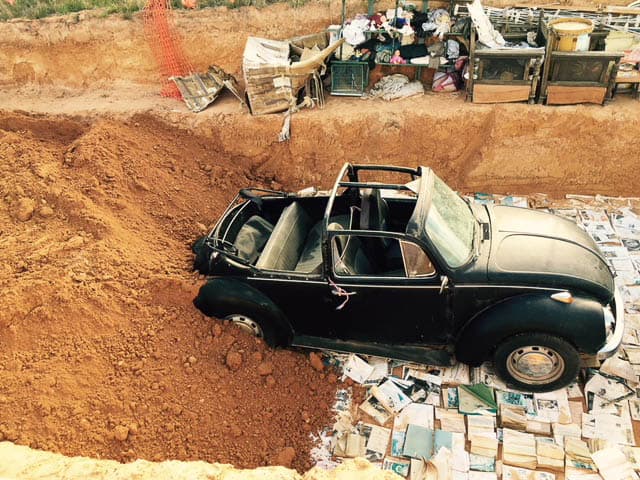 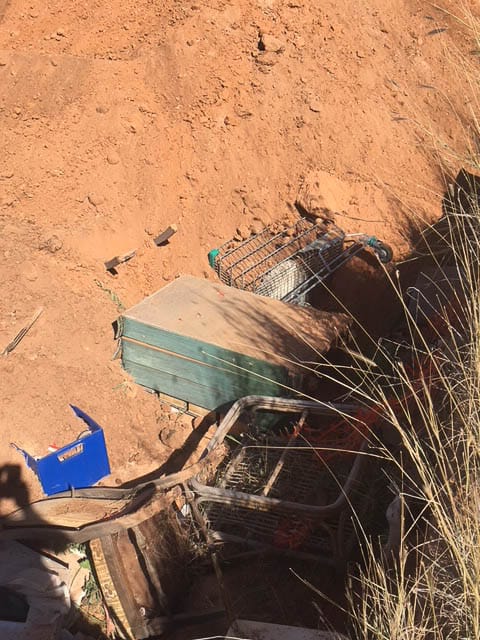 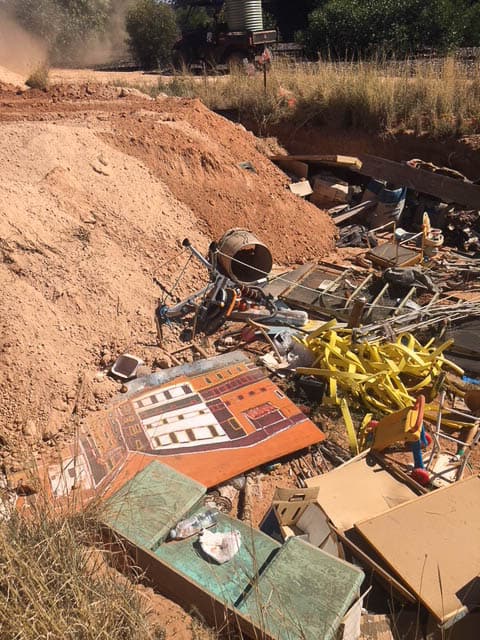 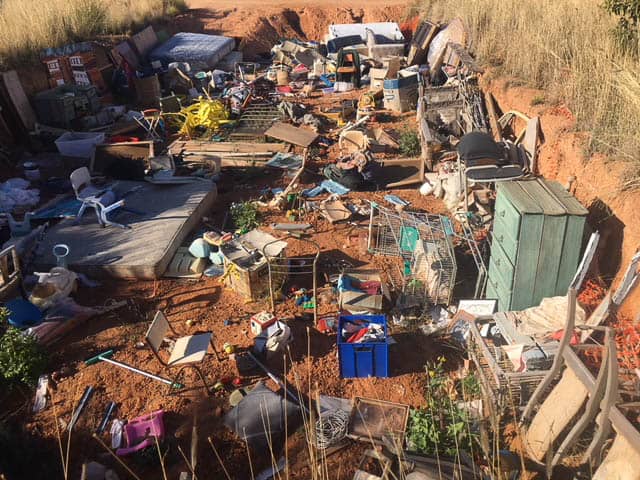 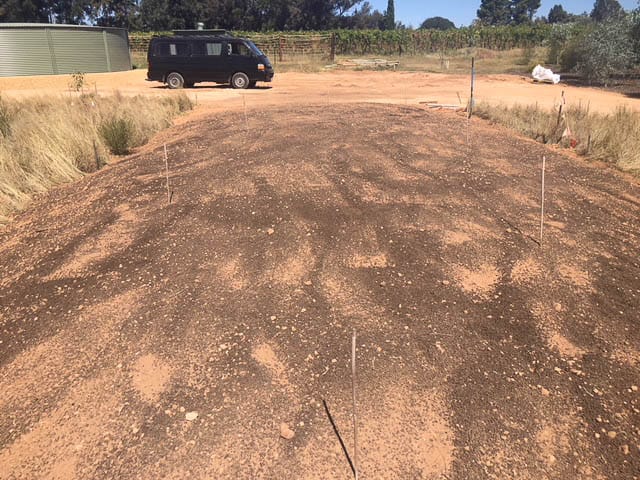 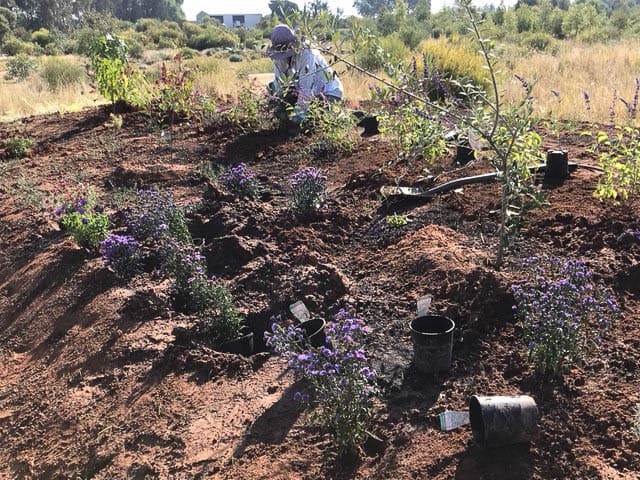 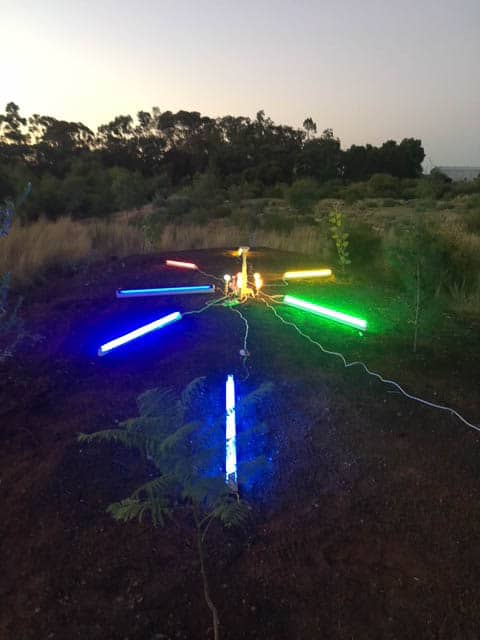 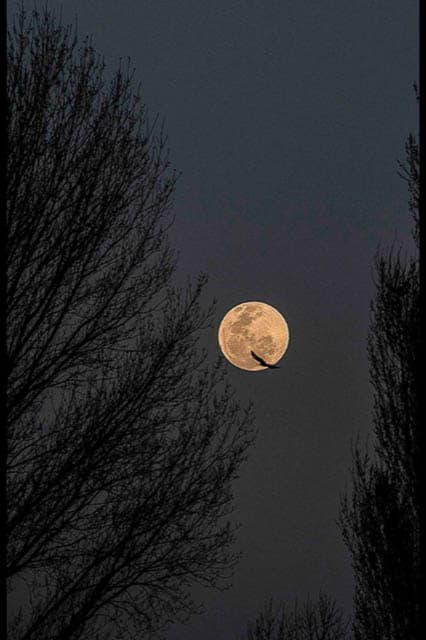 At sunset on the winter solstice, June 21 2016, the artist Domenico de Clario began a ritual burial of his life’s belongings inside a pit measuring twenty metres by ten and three metres deep.

The buried objects included the artist’s archive (all the materials that have made up installations and performance projects since 1973); the artist’s parents’ belongings accumulated from their arrival in Australia in 1956 until their passing in 2015; collected toys, books and clothing that once belonged to the artist’s children and grandchildren; the car the artist drove from 1984 until 2016; the car his father drove from 1984 until his passing in 2013; the entire collection of the artist’s art magazines and journals dating back to 1969; a trailer and various kitchen appliances, paintings, sculptures and numberless other objects. On Good Friday, March 30, 2018, the filling of burial pit was deemed completed, the pit was filled with red earth and a rounded mound was formed above it. Upon the rising of the full moon at sunset that evening seven trees were planted atop the mound, two metres above the surrounding eight-acre native garden. The plantings included an olive, a flame tree, a jacaranda, a Murray pine, a lemon flowered gum, a silky oak and a white Mallee.

Naturally, we at Garland thought you’d be curious to know more about this extraordinary sacrifice.

✿ What prompted this work?

I’ve been regularly burying my possessions such as clothing, various personal items and artworks since the late 1960’s.

Projects located at the Mildura Sculpturescape (1973, 75, 78, 80); at Melbourne’s Pinacotheca Gallery (1973, 1975, 1976); at the NGV, such as the 1975 installation ‘elemental landscapes’ for the ‘Artist’s Artists‘ series and its re-installation in the Murdoch Court in 1993; in various group shows at Melbourne University’s George Paton Gallery and in other locations were all opportunities to engage with the question of the nexus between private and public space that such projects addressed through burials, installations and performances.

Since the early 1970’s I consequently accumulated a very large archive of all the materials I used and re-used and after my parents passed away a few years ago their possessions became a part of this archive as well.

My family has been deeply involved in my practice and many of my family members have actively participated in many of my projects.

As the archive became too large to continue storing I began to consider how I could keep it all together for perpetuity.

I didn’t want any of the objects that comprised it to be dispersed, sold, lost or destroyed.

Its burial seemed to be the logical solution, both in the context of my previous and current practice and in order to fulfil the practical outcomes I was looking for.

The northwest Victorian city of Mildura, now my home as well as the location where many of my previous burials had taken place, seemed to be the obvious choice for this final burial.

Two years ago two friends of mine began to build a native garden spreading over eight acres in a property in Irymple, a locality just outside Mildura.

They offered me a small space in the garden to accommodate the burial pit and I gratefully accepted.

Consistent with my practice I decided to align the burial process to the moon and sun cycles, and the ritual filling of the pit began on the 2016 winter solstice.

Two more collaborative performance evenings, one on the summer solstice of 2016 and the other on the winter solstice of 2017, marked the progress of the project through its unfolding. On the full moon of March 30 this year the performance cycle was completed as the pit was filled and covered by a large red-earthed mound.

Its three subterranean layers contain the following and much more: my parents’ life possessions; my chidren’s and grandchildren’s toys, clothing and other items; my own clothes and personal effects; the car my father owned the last thirty years of his life and the car I drove from 1984 until very recently.

Both vehicles had since the 1990’s been principal components of many of my projects variously located in Melbourne, Sydney, Lorne, Appin (NSW), Adelaide, Lismore and Perth.

The mound has been planted with seven trees, each flowering in one of the spectrum/chakra colours, signalling the visible existence of an invisible body still functioning below ground; I think of this body as my family’s memory-body.

I don’t comprehend the subtle implications of the relationship between visible and invisible except to acknowledge that this circuitry facilitates the seven trees’ blooming in the colours aligned to those attributed to the light rays emitted from each of the body’s seven chakras.

Much of the entire native garden can be viewed from atop the mound and this sight will be enjoyed for many years to come as visitors to the garden climb the mound and sit under the welcome shade of the seven flowering trees.

✿ How have you encountered tonglen previously?

The Tibetan Buddhist principle of tonglen (defined most simply as the breathing in of distress and the consequent breathing out of ease) has for over twenty-five years appealed to me as a most appropriate response to the question of how one might most usefully employ one’s breathing cycle to aid and support all living beings.

It seems to me to be the simplest and most effective measure anyone can employ to maximise one’s usefulness to each other and to the world we live in.

Each of the trees planted atop the mound itself practices tonglen through its absorption of carbon dioxide and other harmful gases (breathing in distress) and consequent release of oxygen (breathing out ease). The ultimate purpose of both my practice and of every single item buried in the pit can be reduced to the facilitation of tonglen, as everything under the mound’s soil nurtures the trees and supports them in their work.

I have purposefully titled many of my projects tonglen because I believe that in the end, the facilitation of this process constitutes my most useful function.

✿ At what point did you draw the line about what would be buried? Did you keep some clothes to wear, at least for the day?

Two years ago, thanks to the generosity of Ross Lake and Helen Vivian, I was able to store all of my archive in a large shed only fifty metres away from the burial site.

Consequently, I was then able to begin to sort through thousands of items, consider the past history of each one and perhaps transfer this dynamic entirely into my own self, taking on the role of the repository of the memory-body of all that I was about to bury.

How did I decide what would be interred and what would not? All of my parents’ clothes, personal effects and furniture, my children’s and grandchildren’s toys would all be buried, as would all the traces of my involvement with the art world, such as my entire collection of art magazines from the 1970’s (I use to save for weeks to buy a single one!), documents and letters, various art books and catalogues. These would cover the actual floor of the pit, to be overlaid by all else. My VW Beetle, as a principal component of many of my installations and performances, would be buried, as would my father’s 1984 Toyota Corolla, which after his passing in 2013 I had transformed into a sailboat, in an attempt to posthumously acquiesce his unfulfilled lifelong desire to sail his own boat.

This Toyota-boat was installed facing the southern ocean at the very end of the Lorne Pier, as part of the 2014 Lorne Biennale, so acknowledging that my father’s final ceremonial journey to an unknown destination would take place at the helm of his own boat.

Now that its ultimate function had been fulfilled the time had come for the Toyota-boat to also be interred.

i have some clothing items left, but only for an emergency, or for an event whose nature I cannot yet imagine. I basically tend to wear the same few things anyway…

✿ Have you started to re-stock your life? Are you buying replacements for the buried things that you need?

The idea of need does not enter the equation representing this dynamic. None of the things now below ground could ever be replaced; each stood in a unique relationship with both its user and its owner, and also with me.

✿ How did it feel when the final object was buried?

As one does when one arrives at one’s final destination after a long effort. Such arrivals engender both a sense of completion and a sense of the uselessness of the required effort because one has to always simply begin again. In the end, each arrival signals a new departure, a little like attempting to contain gushing water with one’s bare hands. One endlessly arrives at the horizon and immediately perceives it still far in the distance. Understanding the nature of an action resides in being at one with its unfolding, as usual, not in its completion or outcome.

When I laid down the last object inside the pit I felt a little like the day I walked along Goolwa beach, heading towards the mouth of the Murray after having set off on my long walk from its source over three months previously; everything kept revolving around me, each of my actions feeling so infinitesimally tiny, my efforts minuscule. And I understood then that the secret core of my effort could not be understood during my final day’s walk to the mouth of the Murray but had been contained all along at the heart of each day’s unfolding.

What about the first object that was laid in the burial pit? Or can I remember perhaps the seventy-seventh? By the time one reaches the end of such a seemingly endless journey one has long realized the futility of holding on to any mindfulness about its very final act. One realizes that it was all contained in all of its doing, and by then it’s probably too late, it’s all done!

✿ After reviewing your life’s belongings before burial, was there one object you remember with a particular poignancy?

There is no one object whose story is more present in me than any other. The point of the burial is that each and every one, in their many thousands, is finally living under the soil together, forming one single body. That narrative proposes that the totality of each of the parts, like the threads of a tapestry, combine together to form a single whole, where each infinitesimal component’s existence only makes sense as the absolutely necessary point-of- light in a single integrated firmament.

The whole could not exist, could not support the tonglen of the seven trees if even a single component of its invisible underground body went missing. It’s the entirety of that body under the soil that is now finding its true expression through the trees’ blooms and through the plants that are nurtured by it. 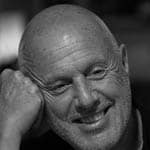 I currently live and work in Mildura, where I chair the Arts Mildura Board and co-ordinate the museum of innocence, which I established in 2016.

I also chair mildura contemporary practice which functions under the banner of Arts Mildura and offers residencies to visiting artists and a beautiful project space.

I play tennis four times a week on the loveliest grass tennis courts in the world located at the edge of the Murray River.

Across the river begins the endless expanse of inland Australia, extending all the way to the Indian Ocean to the west and the Timor Sea to the north.

Between now and my passing I am committed to experiencing as much of this plenitude as I can manage. See website